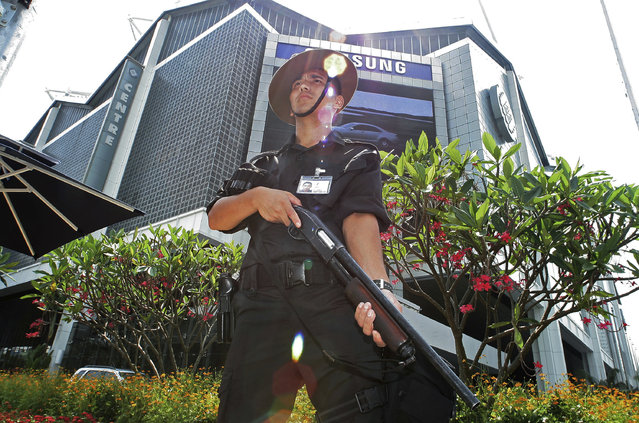 In this Monday, September 11, 2006, file photo, a Gurkha police officer stands guard outside the venue of the IMF-World Bank meetings in Singapore. U.S. President Donald Trump will meet with North Korea's leader Kim Jong Un in Singapore on upcoming June 12, Trump announced in a Tweet Thursday May 10, 2018. “We will both try to make it a very special moment for World Peace!” Trump said in a tweet. (Photo by Wong Maye-E/AP Photo) 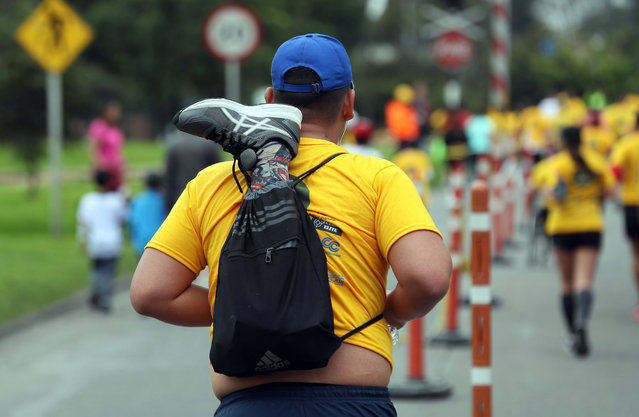 Disabled athletes compete in the Race for the Heroes 10K in Bogota, Colombia, 06 May 2018.The race a sporting event that has been held for 10 years in the city of Bogota. Its main purpose is to promote the solidarity of Colombians with the Military and Police officers injured in the performance of their duty, as well as their family group. (Photo by Mauricio Duenas Castaneda/EPA/EFE) 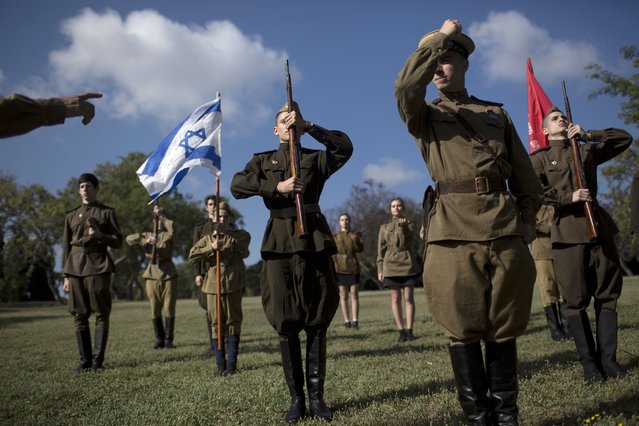 Israeli youths from a group called WWII Reenactment Club rehearse before a ceremony marking the Victory Day, in Ashdod, Israel, Wednesday, May 9, 2018. Israeli World War II veterans from the former Soviet Union marched together with their families across the country Wednesday to celebrate the 73rd anniversary of the allied victory over Nazi Germany in 1945. (Photo by Oded Balilty/AP Photo) 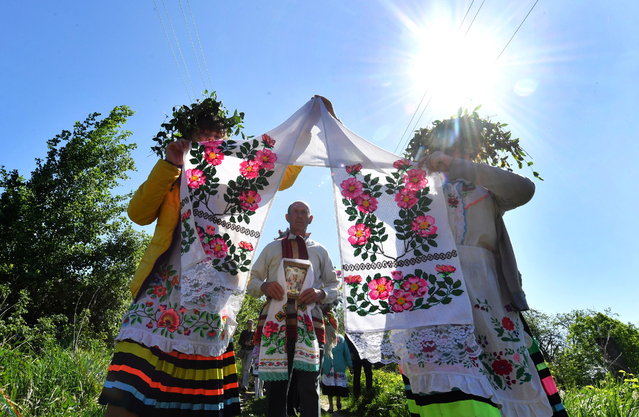 Local women wearing traditional costume h as they perform the Yurievsky Khorovod (Yuriev Round Dance) ancient rite in the village of Pogost. On May 6, Belarus celebrates the day of spring and harvest feast, a tradition that dates back to centuries ago when the Slavs used to let livestock to graze in the fields for the first time after winter. Now, only the Belarusian village of Pogost performs the rite. (Photo by Viktor Drachev/TASS) 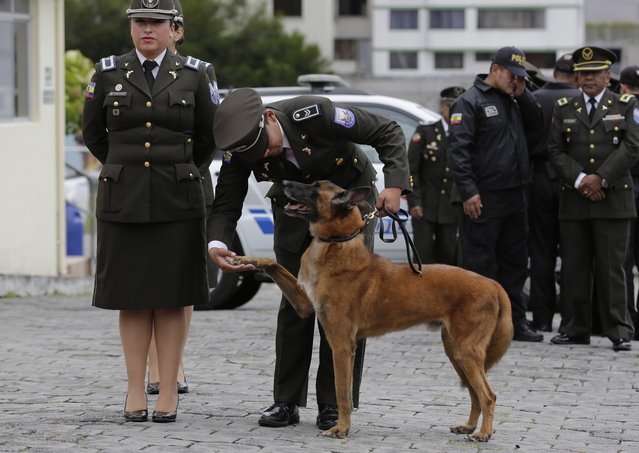 In this Wednesday, May 9, 2018 photo, a retiring police dog spends a last moment with his handler before being handed over to his new caretakers in Quito, Ecuador. The ceremony retired 61 police dogs who've spent years sniffing out illegal drugs and who helped rescuers find victims. (Photo by Dolores Ochoa/AP Photo) 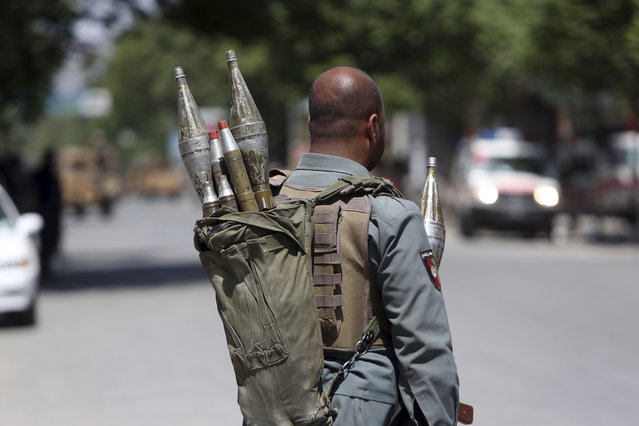 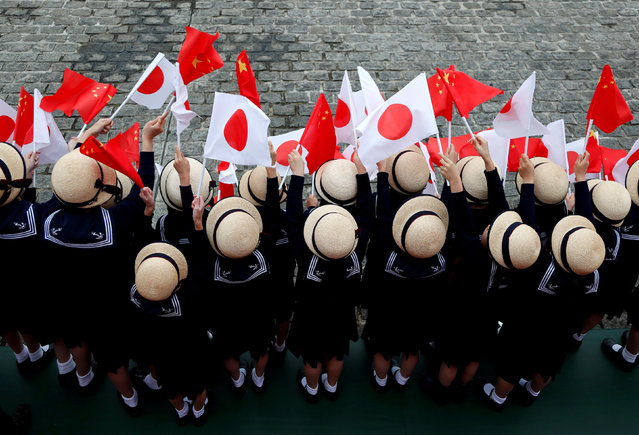 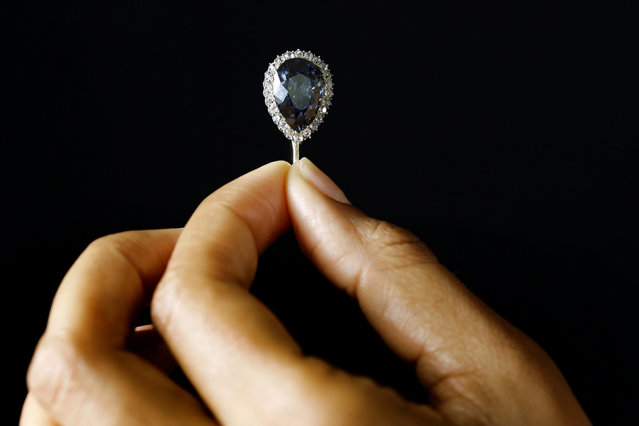 A model holds The Farnese Blue, an unknown historic blue diamond to be sold for first time in 300 years, during a preview of Sotheby's auction sale in Geneva, Switzerland, May 9, 2018. (Photo by Pierre Albouy/Reuters) 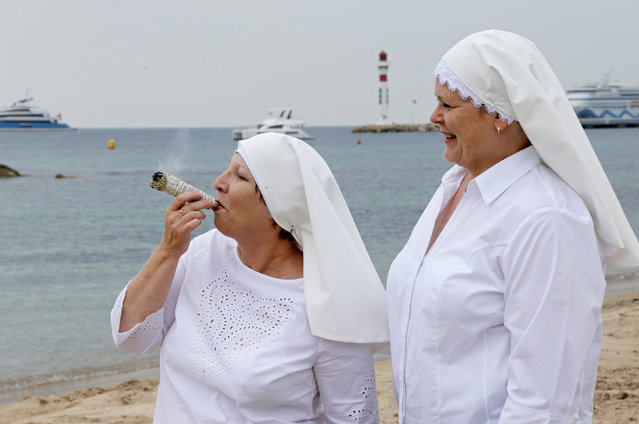 Sister Kate and Sister Claire pose on the beach to promote the documentary film “Breaking Habits?” at the Cannes Film Festival on May 09, 2018 in Cannes, France. (Photo by Regis Duvignau/Reuters) 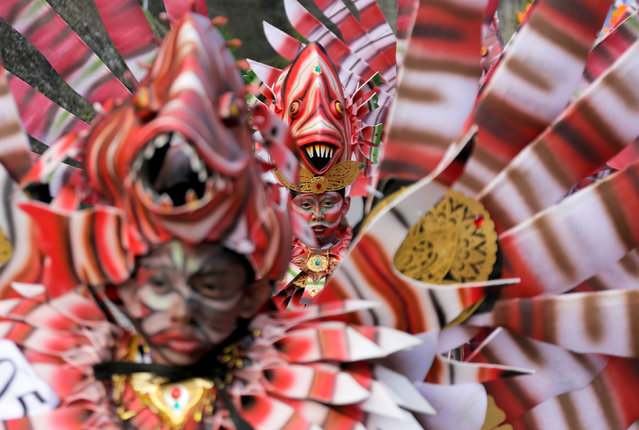 Balinese artists dressed in decorative costumes take part in the Maritime Festival at Pandawa Beach on the resort island of Bali, Indonesia May 9, 2018. (Photo by Johannes P. Christo/Reuters) 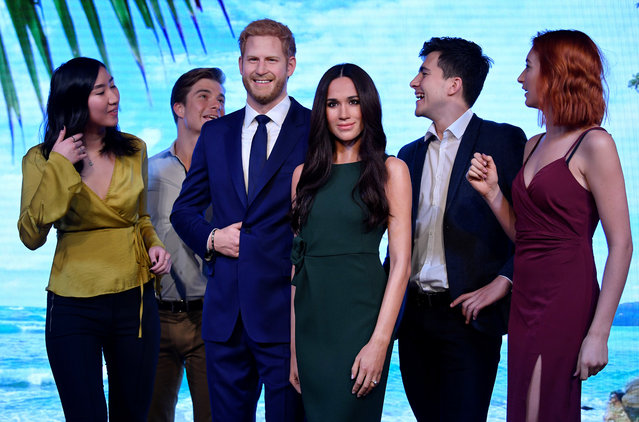 Models pose with waxwork representations of Prince Harry and his fiancee Meghan Markle at Madame Tussauds in London, Britain, May 9, 2018. (Photo by Toby Melville/Reuters) 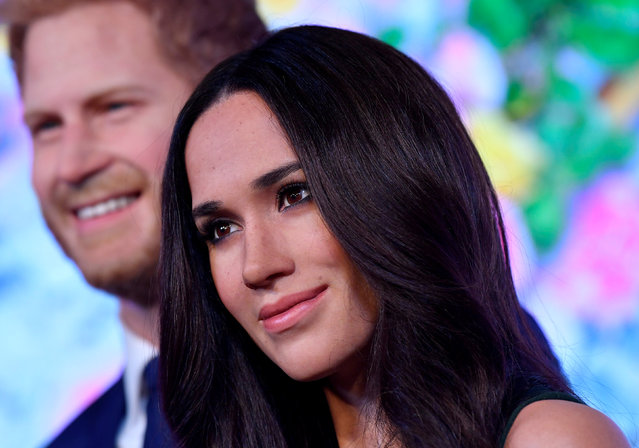 Waxwork models of Britain's Prince Harry and his fiancee Meghan Markle are seen on display at Madame Tussauds in London, Britain, May 9, 2018. (Photo by Toby Melville/Reuters) 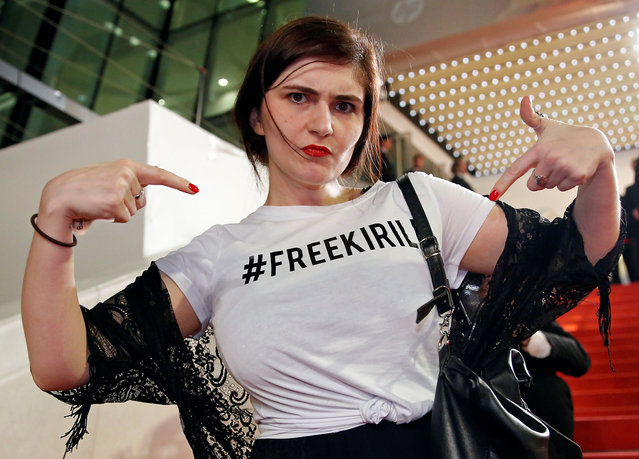 A guest wears a shirt, asking for the release of film director Kirill Serebrennikov as they attend the screening of “Summer” (“Leto”) during the 71st annual Cannes Film Festival at Palais des Festivals on May 9, 2018 in Cannes, France. (Photo by Stephane Mahe/Reuters) 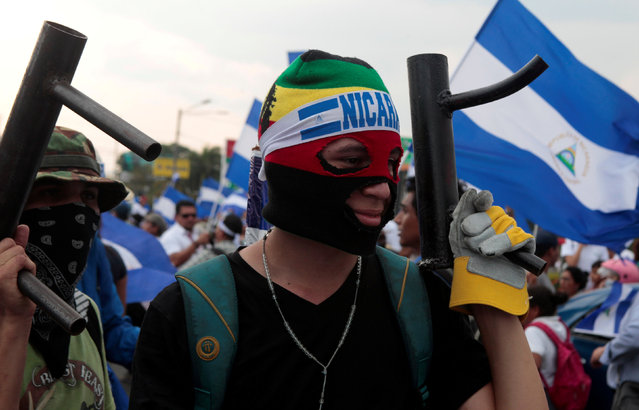 A demonstrator takes part in a protest march against Nicaraguan President Daniel Ortega's government in Managua, Nicaragua May 9, 2018. (Photo by Oswaldo Rivas/Reuters) 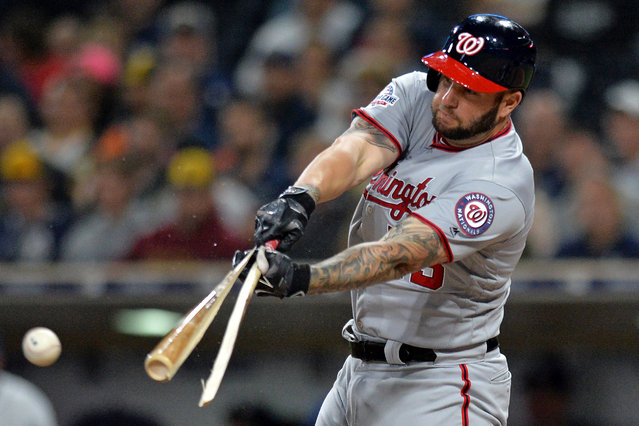 Washington Nationals first baseman Matt Adams (15) breaks his bat lining out in the seventh inning against the San Diego Padres at Petco Park in San Diego, CA, USA on May 9, 2018. (Photo by Jake Roth/Reuters/USA TODAY Sports) 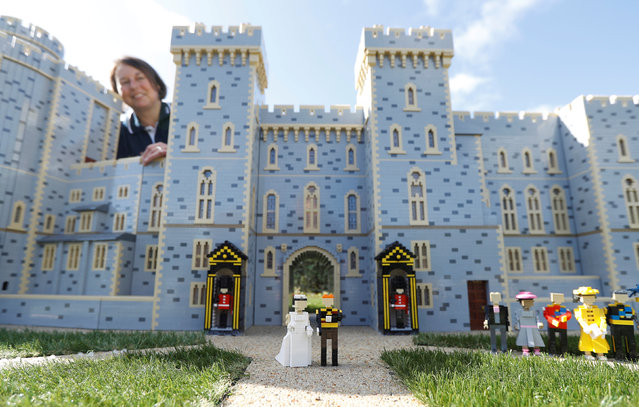 Head model maker, Paula Laughton poses for a photograph with a LEGO Windsor Castle replete with royal wedding between Britain's Prince Harry and Meghan Markle, in Windsor, Britain May 10, 2018. (Photo by Peter Nicholls/Reuters) 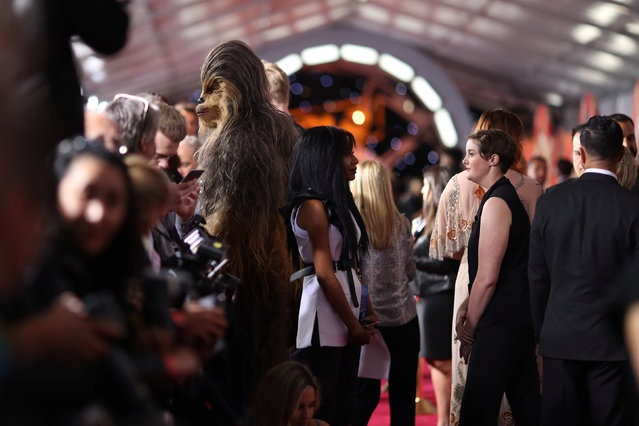 Chewbacca attends the premiere for the movie “Solo: A Star Wars Story” in Los Angeles, California, U.S., May 10, 2018. (Photo by David McNew/Reuters) 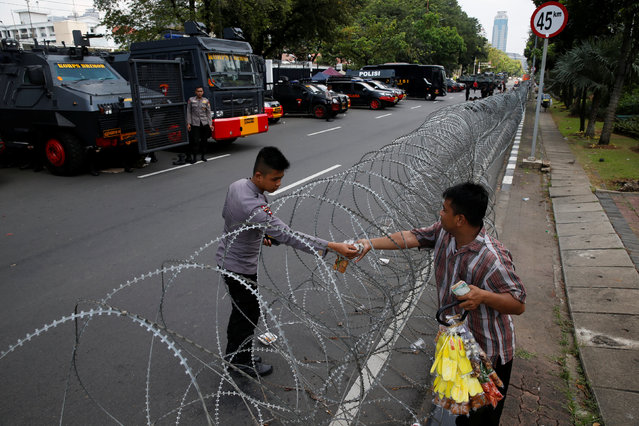 A policeman buys a snack as he stands guard in front of U.S. embassy in Jakarta, Indonesia, during Indonesia Muslim rally to support Palestinians and against the U.S. moving its embassy to Jerusalem, May 11, 2018. (Photo by Reuters/Beawiharta) 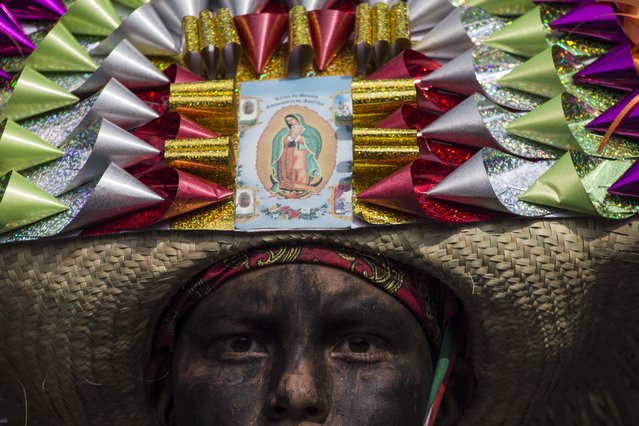 In this Saturday, May 5, 2018 photo, a child dressed as a revolutionary Zacapoaztla indigenous soldier attends the re-enactment of The Battle of Puebla between the Zacapoaztlas and French army during Cinco de Mayo celebrations in Mexico City. Cinco de Mayo commemorates the victory of an ill-equipped Mexican army over French troops in Puebla on May 5, 1862. (Photo by Christian Palma/AP Photo) 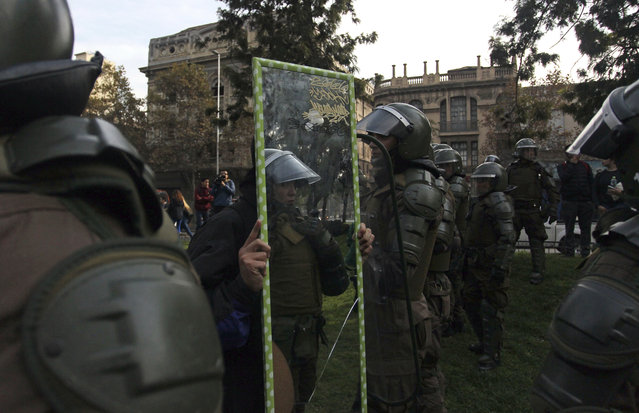 In this Wednesday, May 9, 2018 photo, a demonstrator holds a mirror up to police who detain high school students protesting for higher quality public education, a few blocks from the presidential palace in Santiago, Chile. Students protested near the presidential palace instead of the area far from downtown where the government authorized them to gather. (Photo by Luis Hidalgo/AP Photo) Iranians pour fuel on US flags set aflame during an anti-US demonstration outside the former US embassy headquarters in the capital Tehran on May 9, 2018. Iranians reacted with a mix of sadness, resignation and defiance on May 9 to US President Donald Trump's withdrawal from the nuclear deal, with sharp divisions among officials on how best to respond.
For many, Trump's decision on Tuesday to pull out of the landmark nuclear deal marked the final death knell for the hope created when it was signed in 2015 that Iran might finally escape decades of isolation and US hostility. (Photo by Atta Kenare/AFP Photo) 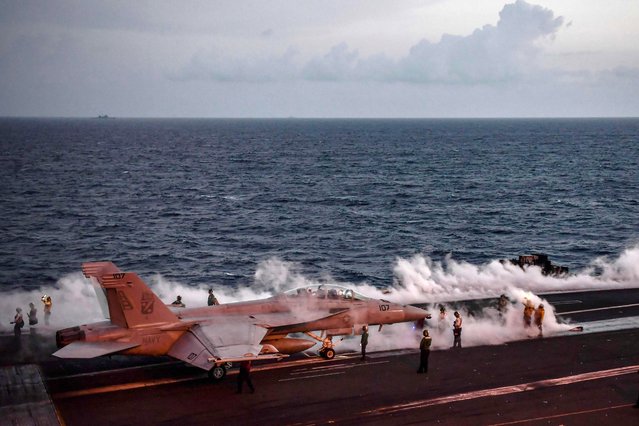 A F18-C Hornet fighter jet waits to take off from the deck of the 330 meters US navy aircraft carrier the USS Harry S. Truman in the eastern Mediterranean Sea on May 8, 2018. The USS Harry S. Truman Carrier Strike Group on May 3 began air operations in support of Operation Inherent Resolve, conducting flight operations against the so called Islamic State (IS) targets in Syria and Iraq. The strike group includes a guided-missile cruiser and four guided-missile destroyers. (Photo by Aris Messinis/AFP Photo) 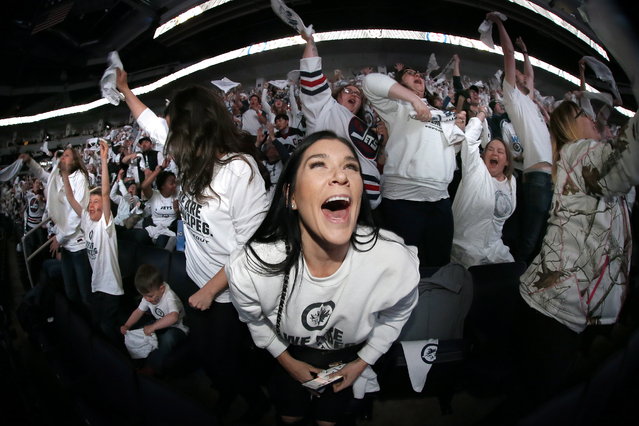 Winnipeg Jets fans react during a viewing party Thursday, May 10, 2018, in Winnipeg, Manitoba, for Game 7 of an NHL hockey second-round playoff series between the Jets and the Nashville Predators being played in Nashville, Tenn. (Photo by John Woods/The Canadian Press via AP Photo) 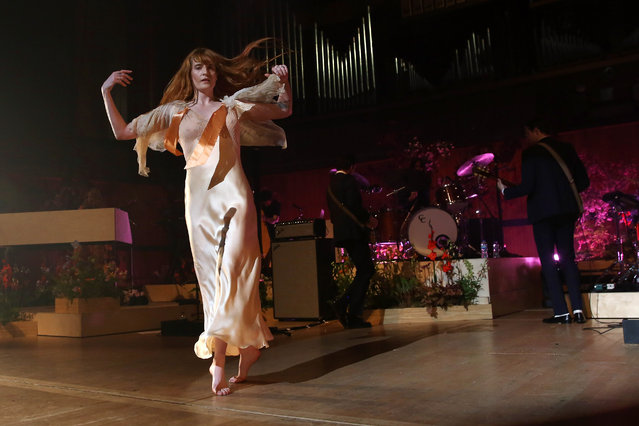