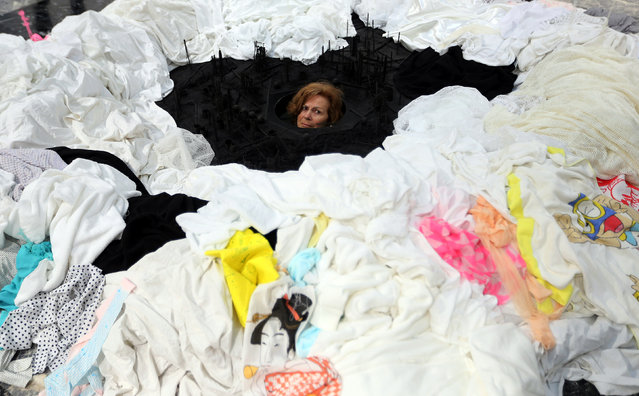 A visitor looks at the installation called “Out of Disorder” by Takahiro Iwasaki at the Japan pavilion during the 57th La Biennale in Venice, Italy May 11, 2017. (Photo by Stefano Rellandini/Reuters) 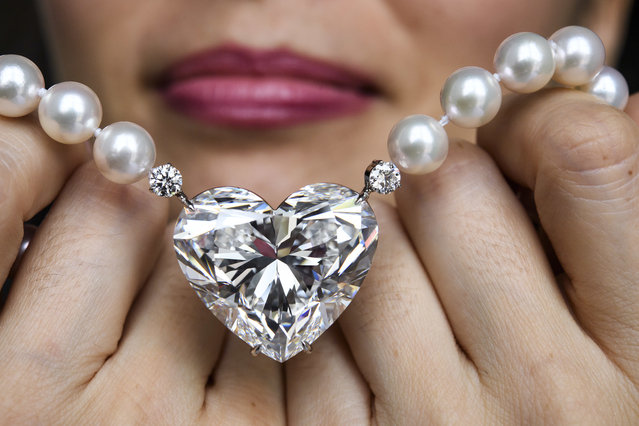 A Christie's employee displays The flawless heart-shaped Boehmer and Bassenge “La legende” diamond during a preview at the Christie's, in Geneva, Switzerland, Thursday, May 11, 2017. It is estimated to sell between 14-20 millions US dollars. The auction will take place in Geneva, on May 17. (Photo by Martial Trezzini/Keystone via AP Photo) 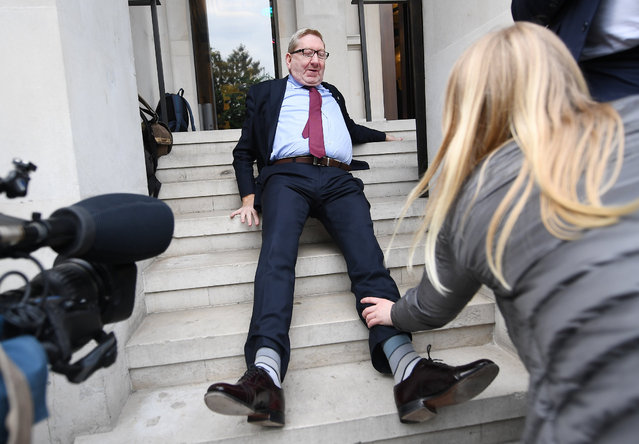 British Trade Union leader Len McCluskey falls on the steps outside the Clause 5 Labour meeting to finalise the Labour manifesto in London, Britain, 11 May 2017. The party's draft manifesto was reportedly leaked overnight in the run up to the feneral election on 08 June 2017. (Photo by Andy Rain/EPA) 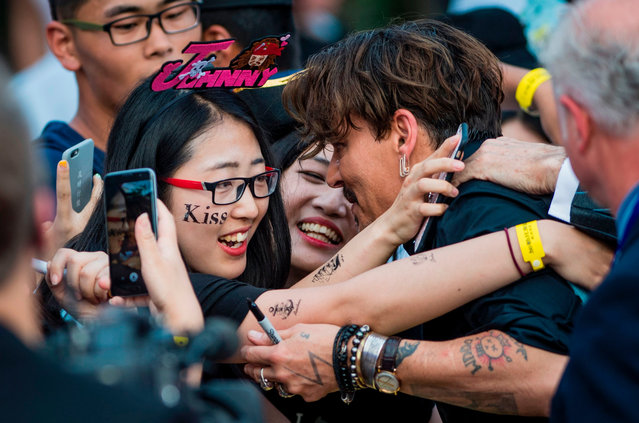 Actor Johnny Depp hugs two fans as he arrives for the world premiere of Disney movie “Pirates of the Caribbean: Dead Men Tell No Tales” in Shanghai on May 11, 2017. (Photo by Johannes Eisele/AFP Photo) 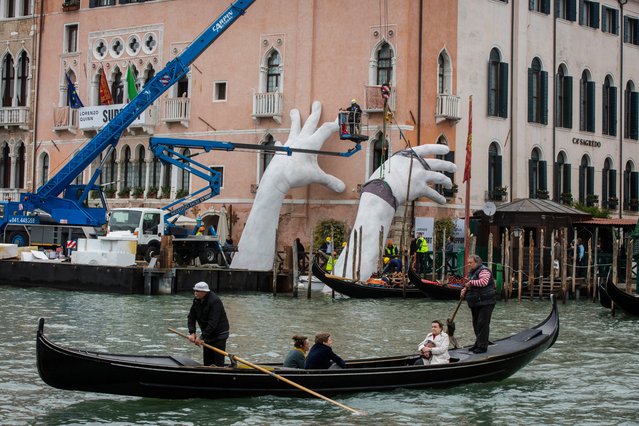 Workers finish to prepare the exhibition “SUPPORT” by Lorenzo Quinn, during the 57th Biennale Arte on May 11, 2017 in Venice, Italy. The 57th International Art Exhibition of La Biennale di Venezia will be open to the public from the June 13 to November 26, 2017. (Photo by David Levene/The Guardian) 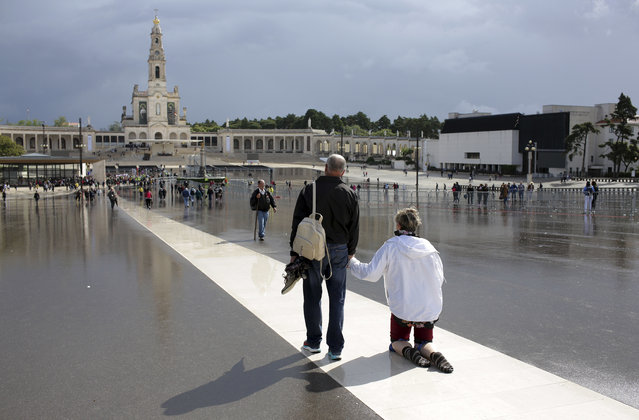 A pilgrim walks on her knees paying penance at the Fatima sanctuary in Fatima, Portugal, Thursday, May 11, 2017. Pope Francis is visiting the Fatima shrine on May 12 and 13 to canonize two Portuguese shepherd children whose “visions” of the Virgin Mary 100 years ago turned the sleepy farming town of Fatima into a major Catholic pilgrimage site. (Photo by Armando Franca/AP Photo) 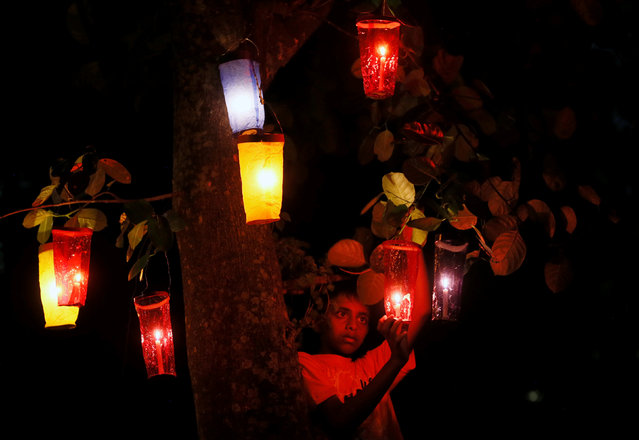 A boy hangs Vesak buckets on a tree, at a house, during the birth anniversary of Buddha, also known as Vesak Day, in Colombo, Sri Lanka May 10, 2017. (Photo by Dinuka Liyanawatte/Reuters) 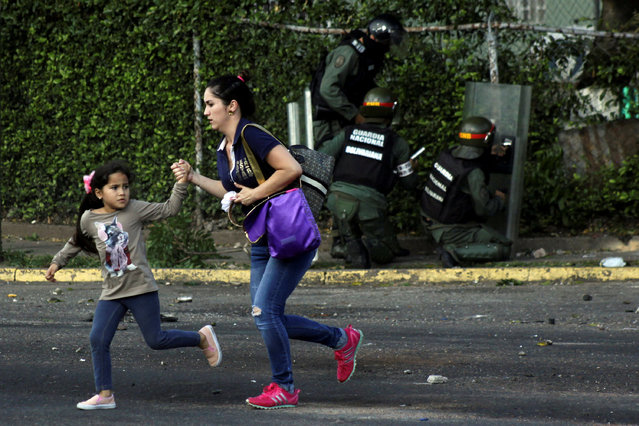 A woman and a girl run away as riot security forces and demonstrators clash during a protest against Venezuela's President Nicolas Maduro's government in Tariba, Venezuela May 9, 2017. (Photo by Carlos Eduardo Ramirez/Reuters) 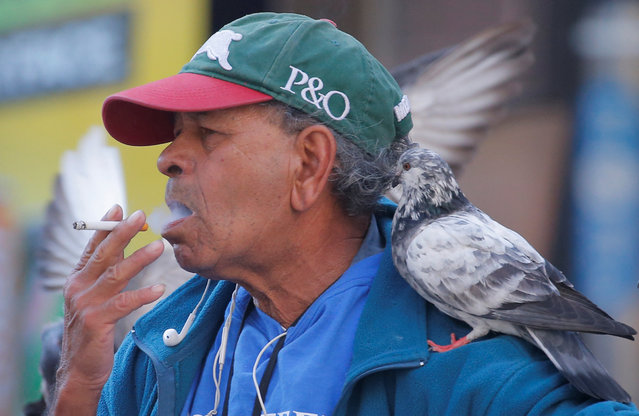 A pigeon sits on the shoulder of a man as he smokes a cigarette in Sydney, Australia, May 11, 2017. (Photo by Jason Reed/Reuters) 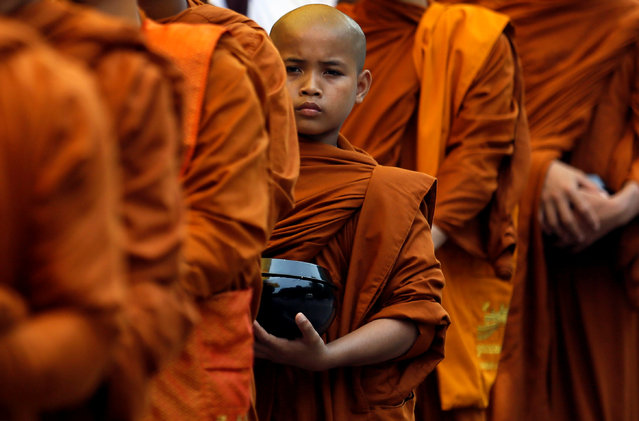 Buddhist monks walk down a road asking for alms during the annual Vesak festival, in Colombo, Sri Lanka May 11, 2017. (Photo by Dinuka Liyanawatte/Reuters) 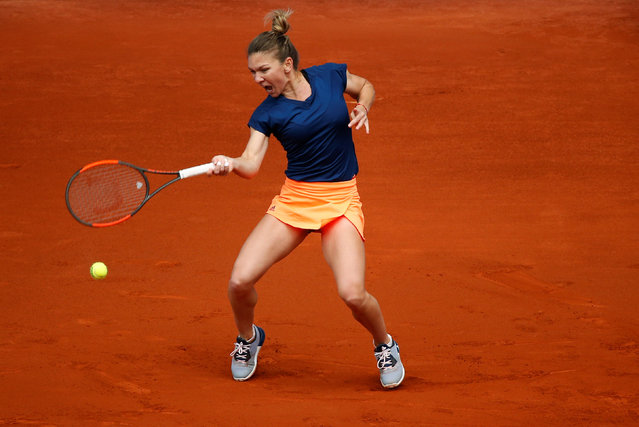 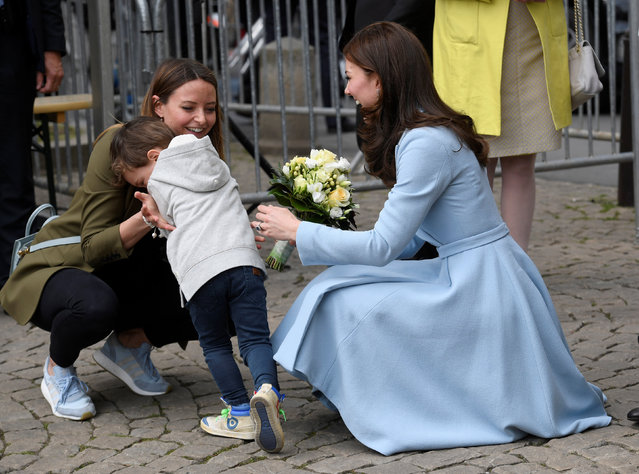 A young boy reacts after he handed a bouquet of flowers to Britain's Catherine, the Duchess of Cambridge in Luxembourg, May 11, 2017. (Photo by Toby Melville/Reuters) 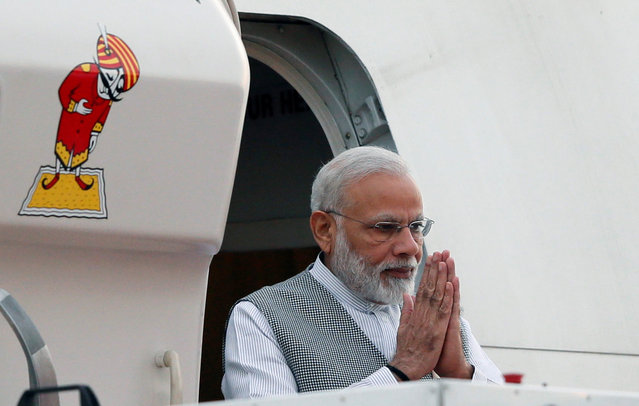 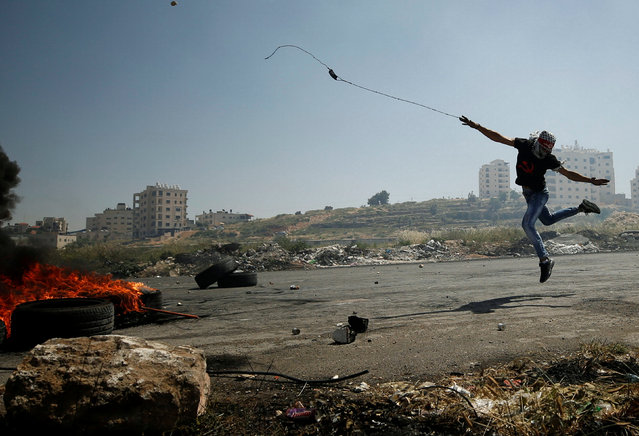 A Palestinian protester uses a sling to hurl stones towards Israeli troops during clashes at a protest in support of Palestinian prisoners on hunger strike in Israeli jails, near the Jewish settlement of Beit El, near the West Bank city of Ramallah May 11, 2017. (Photo by Mohamad Torokman/Reuters) 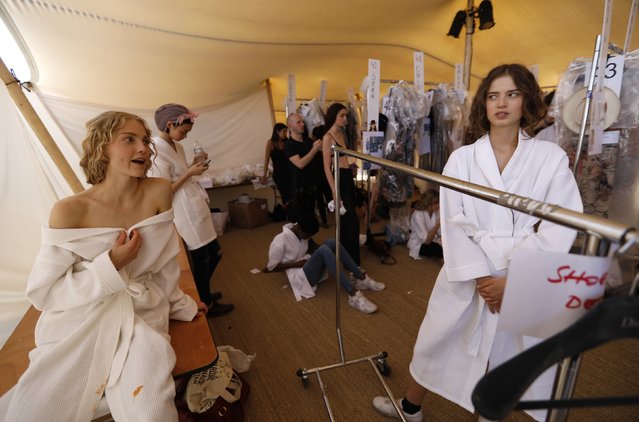 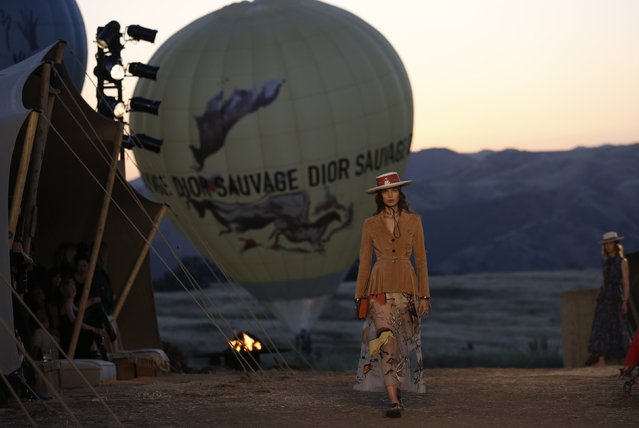 A hot air balloon is seen during the Christian Dior Cruise 2018 Runway Show at the Upper Las Virgenes Canyon Open Space Preserve on May 11, 2017 in Santa Monica, California. (Photo by Mario Anzuoni/Reuters) 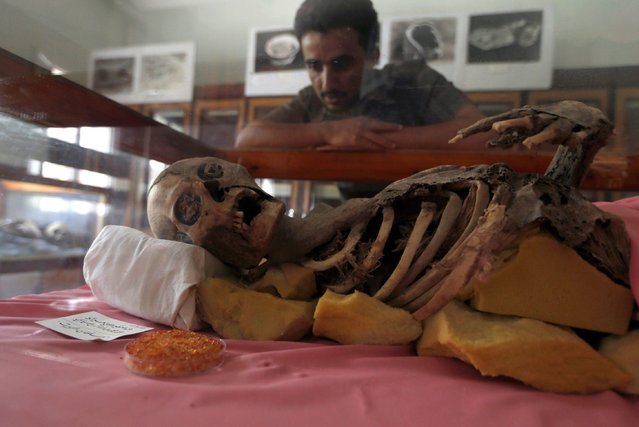 A Yemeni student looks at a millenia-old mummy displayed at Sanaa University, in the Yemeni capital on May 10, 2017. Yemen's war has claimed thousands of lives and pushed millions to the brink of famine – and now the conflict threatens the fate of a collection of millennia-old mummies. With electricity intermittent at best and the country's ports under de facto blockade, experts are fighting to preserve the 12 cadavers in the face of heat, humidity and a dearth of preservative chemicals. (Photo by Mohammed Huwais/AFP Photo) 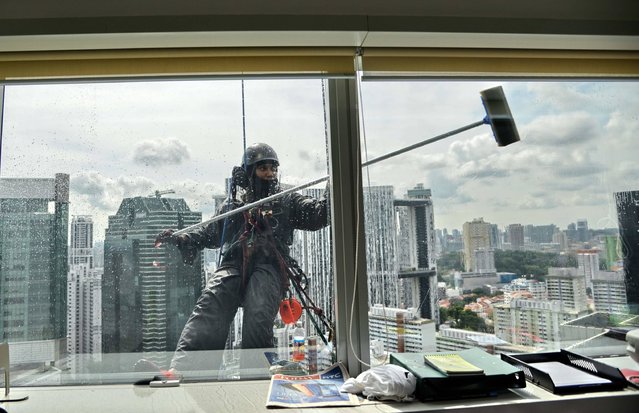 A worker dangling from safety ropes, cleans windows of a high-rise office building in the business district of Singapore on May 11, 2017. (Photo by Toh Ting Wei/AFP Photo) 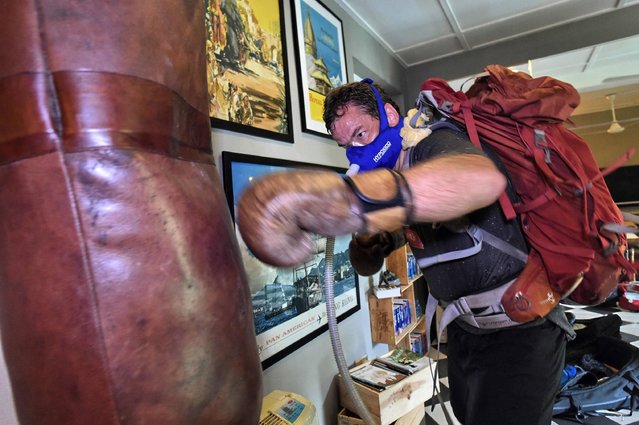 This picture taken on April 22, 2017 shows Brooks Entwisle performing hypoxic boxing training, in preparation for his attempt to summit Mount Everest, in Singapore. For decades, the dream of reaching the summit of Mount Everest has required at least two months on the mountain doing a series of acclimatisation rotations to get used to the harsh low-oxygen environment at the top of the world. Now pre-acclimatisation, which has been at the fringes of the climbing world for several years, is gaining traction, dividing the community between those who see it as yet another tool of modern mountaineering and purists who dismiss it as a gimmick. (Photo by Roslan Rahman/AFP Photo) Chinese honour guards prepare for the arrival of Vietnamese President Tran Dai Quang and Chinese President Xi Jinping during a welcome ceremony at the Great Hall of the People in Beijing on May 11, 2017. Tran Dai Quang is on a visit to China and will attend the Belt and Road Forum for International Cooperation from May 11 to 15. (Photo by Wang Zhao/AFP Photo) 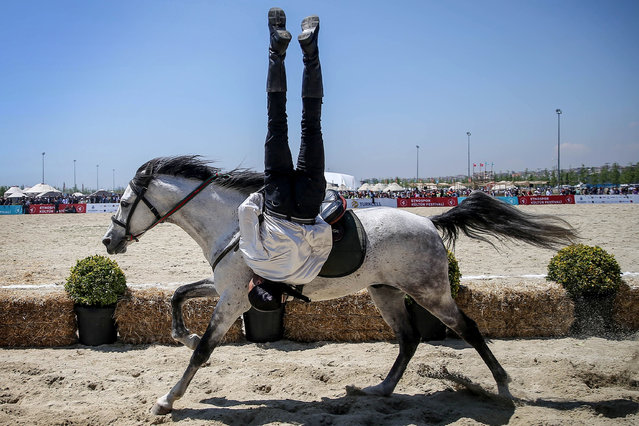 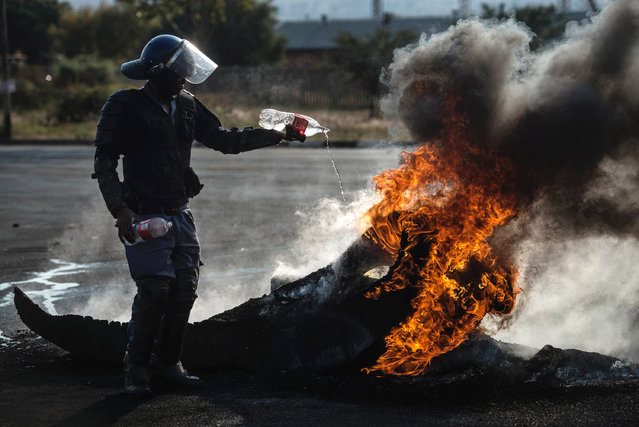 A South African policeman attempts to extinguish a fire after demonstrators burnt tyres to barricade a road, during violent protest demanding better housing on May 11, 2015 in Finetown, Ennerdale, South Africa. (Photo by Mujahid Safodien/AFP Photo) 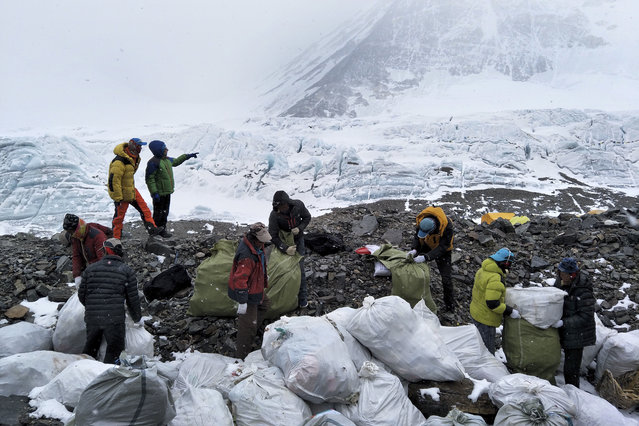 In this Monday, May 8, 2017 photo released by Xinhua News Agency, people collect garbage at the north slope of the Mount Qomolangma in southwest China's Tibet Autonomous Region. Workers and volunteers collected four tons of garbage from the Chinese north side of Mount Everest in the first five days of a cleanup operation, state media reported Thursday, May 11, 2017. (Photo by Awang Zhaxi/Xinhua via AP Photo) 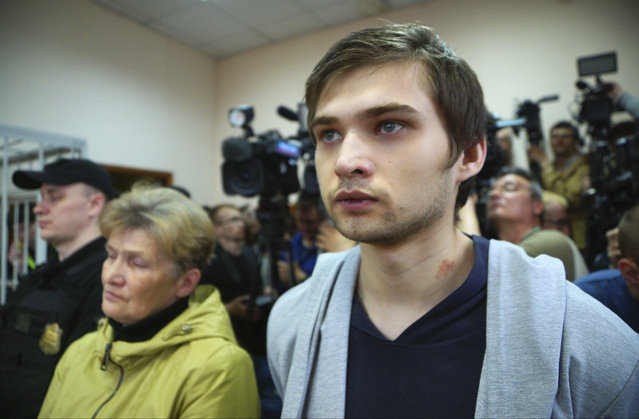 Russian blogger Ruslan Sokolovsky and his mother Yelena Chingina, left, listen to a sentence in a court in Yekaterinburg, Russia, on Thursday, May 11, 2017. Sokolovsky has been convicted for inciting religious hatred for playing “Pokemon Go” in a church and given a suspended sentence. (Photo by Alexei Bulatov/Komsomolskaya Pravda photo via AP Photo) 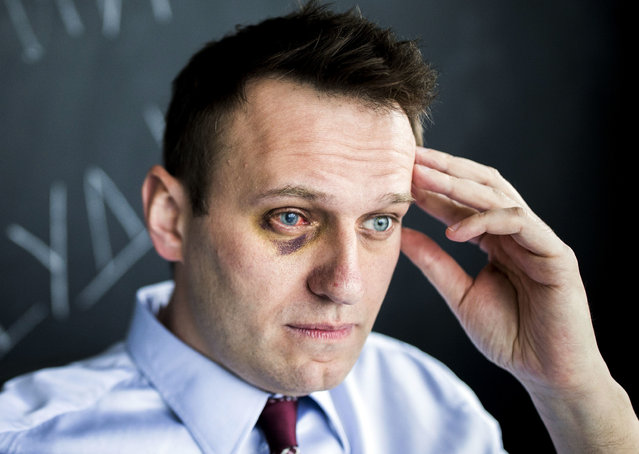 Russian opposition leader Alexei Navalny sits in his office in Moscow, Russia, Thursday, May 11, 2017. Russian opposition leader Alexei Navalny says that he has undergone eye surgery in Spain after being attacked last month. Navalny suffered a severe chemical burn in his right eye last month when an attacker doused him with green antiseptic. (Photo by Evgeny Feldman/Pool Photo via AP Photo)