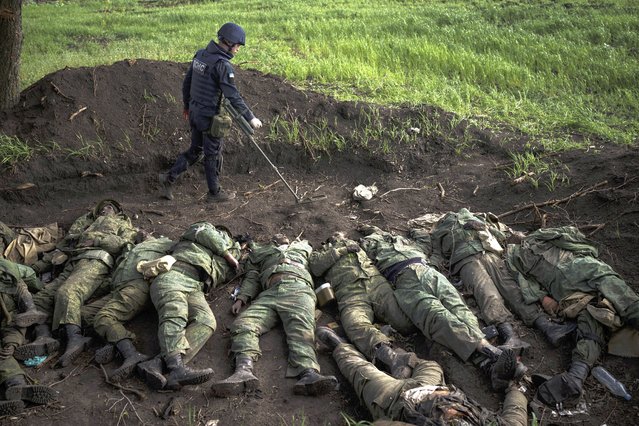 A member of Ukraine demining team checks for explosives around the bodies of 11 Russian soldiers in the village of Vilkhivka, recently retaken by Ukraininan forces near Kharkiv, Ukraine, Monday, May 9, 2022. (Photo by Felipe Dana/AP Photo) 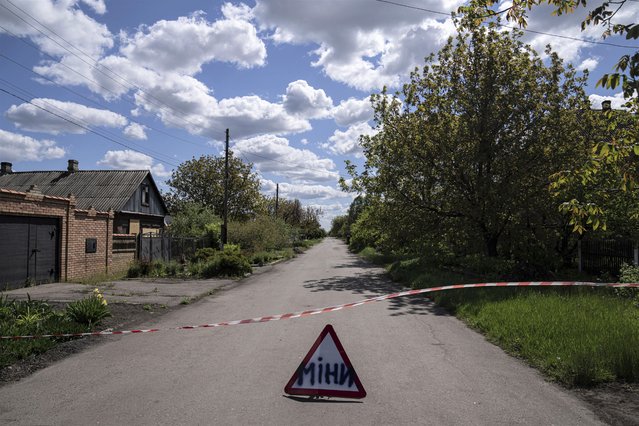 A sign that reads “Mines” placed on a road where unexploded devices were found after shelling of Russian forces in Maksymilyanivka, Ukraine, Tuesday, May 10, 2022. (Photo by Evgeniy Maloletka/AP Photo) 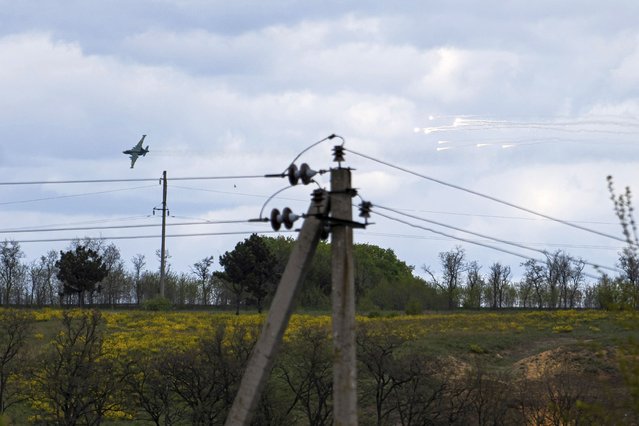 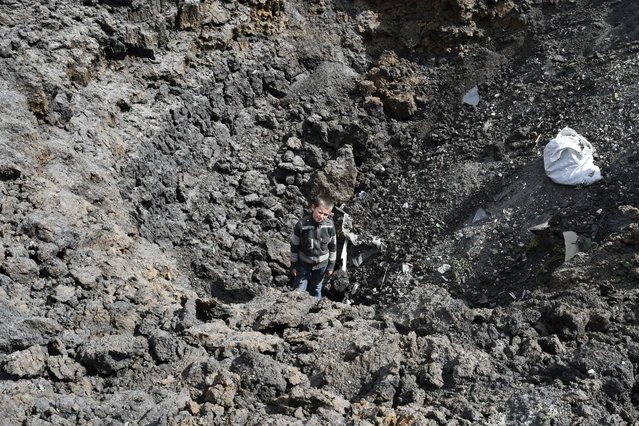 Maxim stands in the crater of an explosion after Russian shelling next to the Orthodox Skete in honor of St. John of Shanghai in Adamivka, near Slovyansk, Donetsk region, Ukraine, Tuesday, May 10, 2022. (Photo by Andriy Andriyenko/AP Photo) 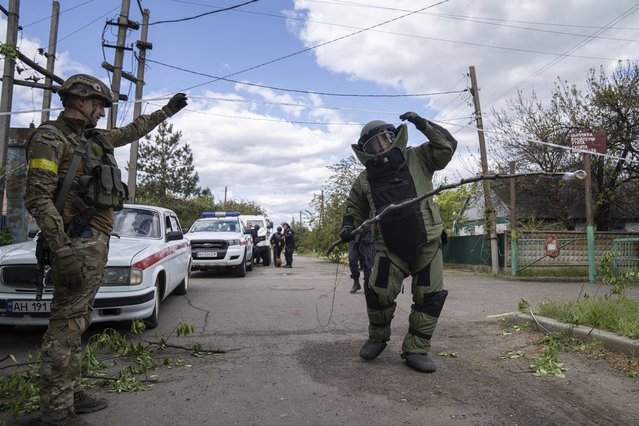 A de-miner wearing protective gear works in an area where unexploded devices were found after shelling of Russian forces in Maksymilyanivka, Ukraine, Tuesday, May 10, 2022. (Photo by Evgeniy Maloletka/AP Photo) 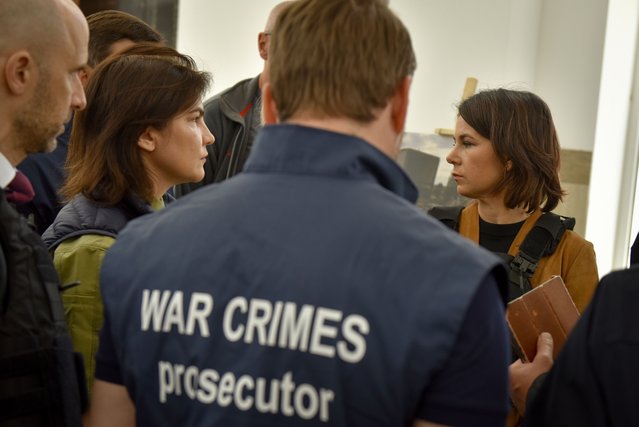 Prosecutor General of Ukraine Iryna Venediktova (L) speaks with German Foreign Minister Annalena Baerbock (R) during her visit to the church and adjacent mass grave sites in Bucha, Ukraine, 10 May 2022. Baerbock is scheduled to meet her Ukrainian counterpart in Kyiv later in the day, being the first German cabinet minister to visit Ukraine since the 24 February when Russian troops invaded Ukrainian territory starting a conflict that has provoked destruction and a humanitarian crisis. (Photo by Oleg Petrasyuk/EPA/EFE) 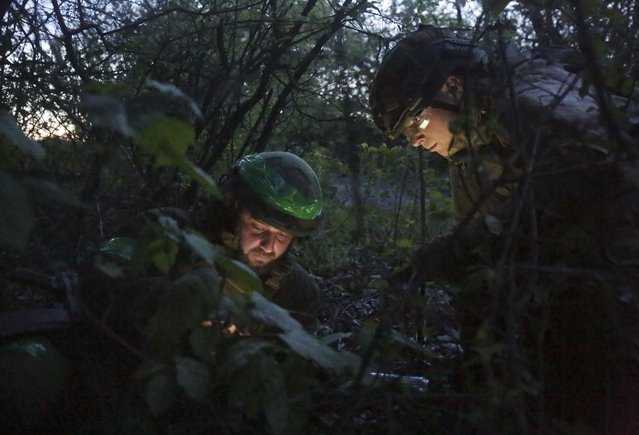 Ukrainian servicemen watch a map on their position near Kharkiv, Ukraine, 10 May 2022 amid the Russian invasion. Russian troops entered Ukraine on 24 February resulting in fighting and destruction in the country and triggering a series of severe economic sanctions on Russia by Western countries. According to the UNHCR on 09 May about 5,917,703 Ukrainians have left Ukraine to seek refuge in neighboring countries. Western countries have responded with various sets of sanctions against Russian state majority-owned companies and interests in a bid to bring an end to the conflict. (Photo by EPA/EFE/Stringer) 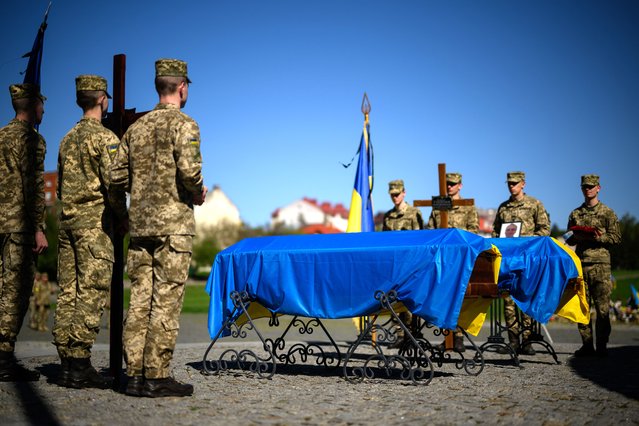 An honour guard stands to attention near the coffins during the joint funerals of Olexandr Moisenko and Sergiy Turpetko in the Field of Mars at Lychakiv cemetery on May 10, 2022 in Lviv, Ukraine. Senior Sergeant Olexandr Moisenko served as a combat medic and died in the Luhansk region of Ukraine. Sergiy Turpetko was born in Lysychansk and died near the Golden Luhansk region of Ukraine. Lviv has served as a stopover and shelter for the millions of Ukrainians fleeing the Russian invasion, either to the safety of nearby countries or the relative security of western Ukraine. (Photo by Leon Neal/Getty Images) A steel worker works on the maintenance of the blast furnace at Zaporizhstal, Ukraine's third-biggest metals plan, in Zaporizhzhia on May 10, 2022, amid the Russian invasion of Ukraine. Food and water stockpiles, generators, toilets, stacks of mattresses and even wood-burning stoves in bunkers deep underground – this Ukrainian steel mill was built with the threat of war in mind. (Photo by Dimitar Dilkoff/AFP Photo) 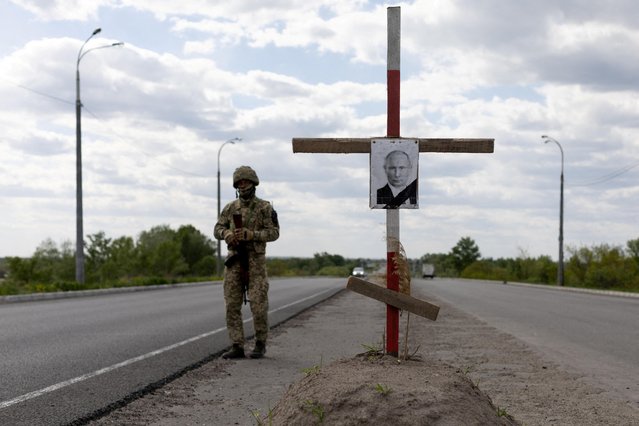 A portrait of Russian President Vladimir Putin in a cross depicting his tomb is seen at a checkpoint outside Dnipro amid Russia's invasion in Ukraine, May 10, 2022. (Photo by Jorge Silva/Reuters) 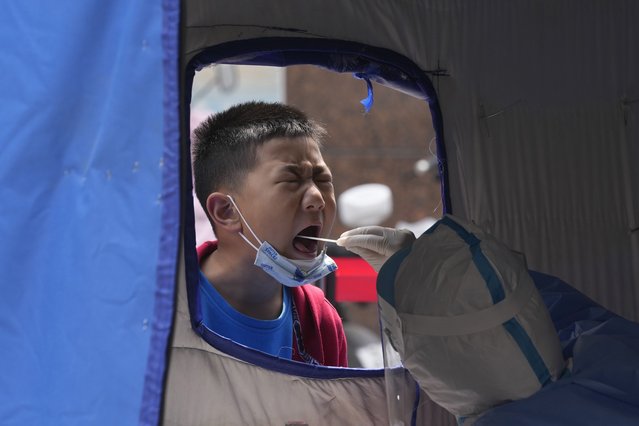 A child opens his mouth to be swabbed for mass COVID test on Thursday, May 12, 2022, in Beijing. China's leaders are struggling to reverse an economic slump without giving up anti-virus tactics that shut down Shanghai and other cities, adding to challenges for President Xi Jinping as he tries to extend his time in power. (Photo by Ng Han Guan/AP Photo) 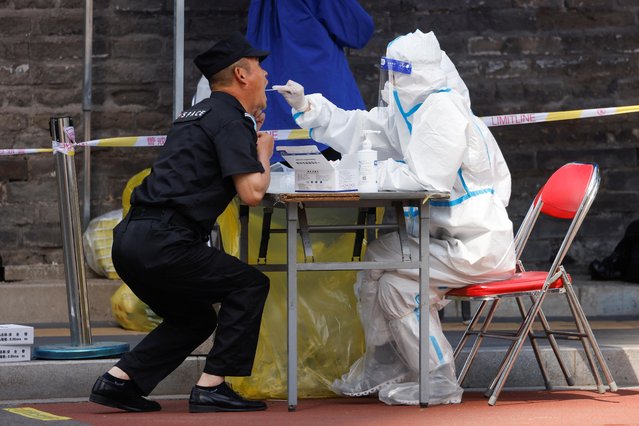 A medical worker in a protective suit collects a swab sample from a man at a makeshift nucleic acid testing site amid the coronavirus disease (COVID-19) outbreak in Beijing, China on May 11, 2022. (Photo by Carlos Garcia Rawlins/Reuters) 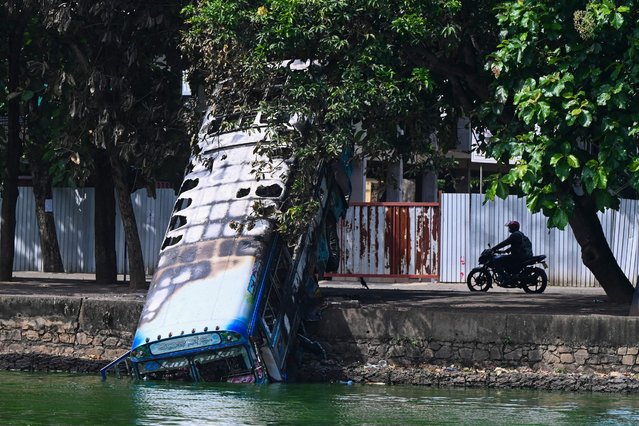 A motorcyclists rides past a burnt bus toppled over an artificial lake during demonstrations against the government over Sri Lanka's crippling economic crisis in Colombo on May 11, 2022. Sri Lankan police have been ordered to go on the offensive and use live ammunition to stop rioting, a top official told AFP on May 11, after another night of sporadic arson attacks. (Photo by Ishara S. Kodikara/AFP Photo) 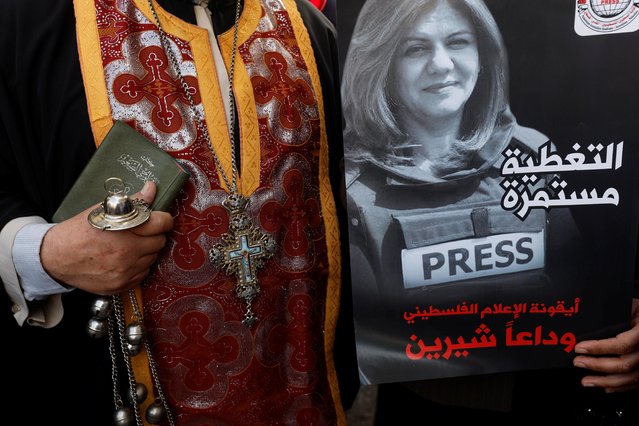 A priest holds a poster depicting Al Jazeera reporter Shireen Abu Akleh who was killed in an Israeli raid, in Ramallah, in the Israeli-occupied West Bank on May 11, 2022. (Photo by Mohamad Torokman/Reuters) Members of the rescue brigade rest after a work shift at the Saratoga Hotel days after a huge blast wrecked the building, in Havana, on May 11, 2022. The death toll from an explosion at the luxury hotel in the old quarter of Havana has risen to 43. Crews continued to comb through the rubble of the Saratoga five-star hotel, which was being renovated and had no guests at the time of the late-morning blast last Friday that was seemingly caused by a gas leak. (Photo by Yamil Lage/AFP Photo) 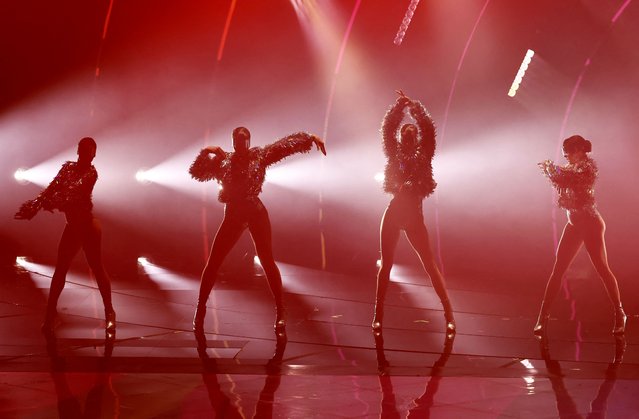 Dancers perform during the first semi-final of the 2022 Eurovision Song Contest in Turin, Italy, May 10, 2022. (Photo by Yara Nardi/Reuters) 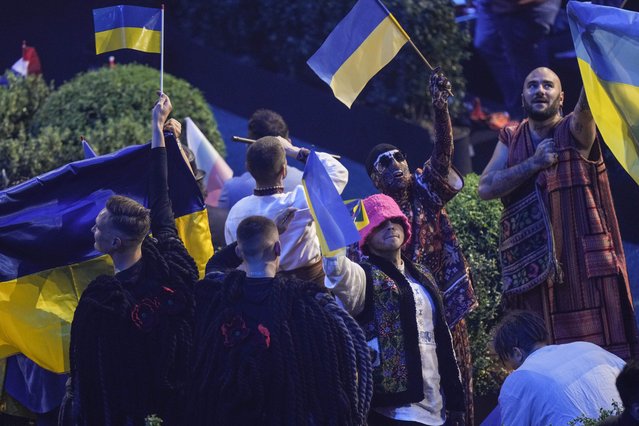 Kalush Orchestra from Ukraine celebrate progressing to the final during the first semi final at the Eurovision Song Contest in Turin, Italy, Tuesday, May 10, 2022. (Photo by Luca Bruno/AP Photo) Italian singer Diodato performs during the First Semi Final of the 66th annual Eurovision Song Contest (ESC 2022) in Turin, Italy, 10 May 2022. The international song contest has two semi-finals, held at the PalaOlimpico indoor stadium on 10 and 12 May, and a grand final on 14 May 2022. (Photo by Alessandro Di Marco/EPA/EFE) 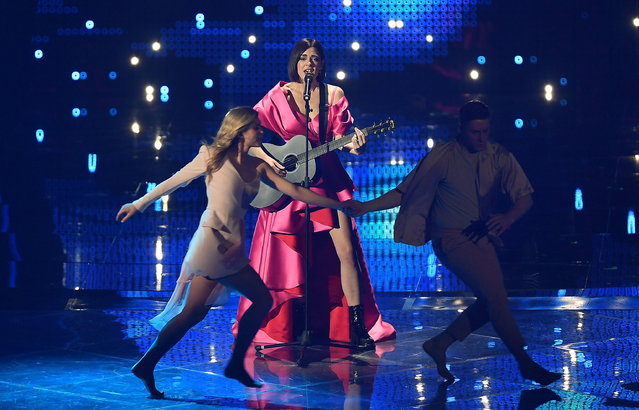 Mia Dimsic from Croatia with the song “Guilty Pleasure” performs during the First Semi Final of the 66th annual Eurovision Song Contest (ESC 2022) in Turin, Italy, 10 May 2022. (Photo by Alessandro Di Marco/EPA/EFE) 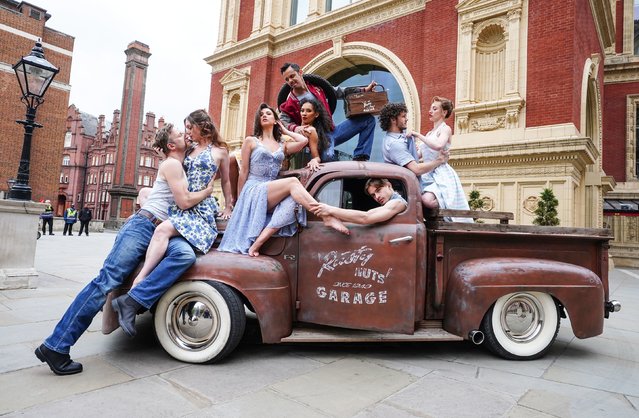