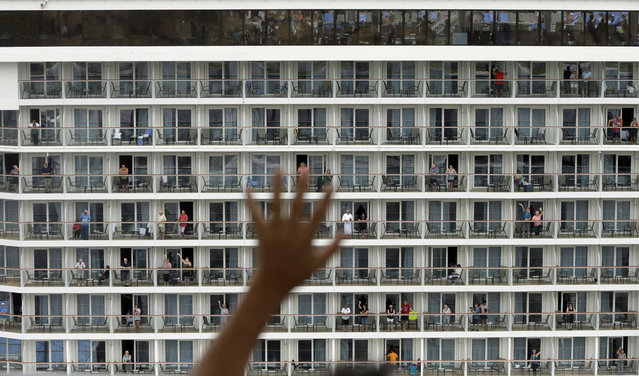 The hand of a tourist waves to passengers of the Norwegian Bliss ship from the Panama Canal Visitors Center as the ship makes its way through the canal, one of the largest ships to ever navigate it, in Agua Clara, Panama, Monday, May 14, 2018. Norwegian Bliss is the largest ship in Norwegian's fleet, with 20 decks and a capacity of about 4,000 passengers. (Photo by Arnulfo Franco/AP Photo) 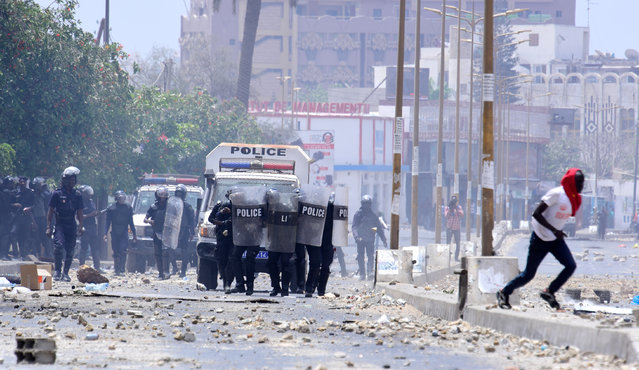 Students clash with Senegalese police during a protest outside the gates of the University Cheikh Anta Diop of Dakar on May 16, 2018 in Dakar. New clashes between students and law enforcement officers erupted at several universities across Senegal the day after a second-year student Mohamed Fallou Sene, 25-years-old, was killed during a protest about late grant payments, sparking further demonstrations at universities across the West African country. Having not received their payments, students insisted on eating at the university restaurants without paying, which prompted the authorities to appeal to the police, the Senegalese interior minister said. (Photo by Seyllou/AFP Photo) 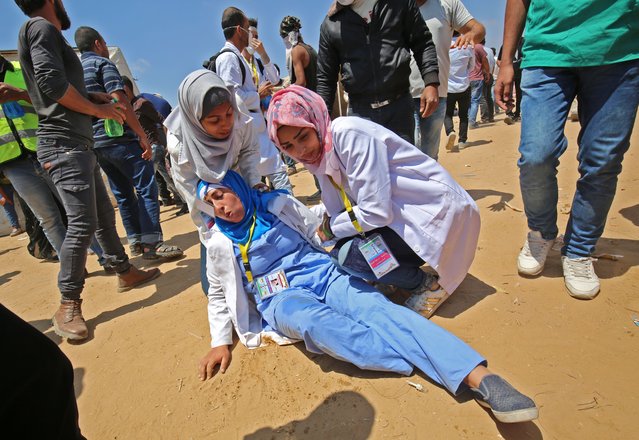 Palestinian woman medics tend to an injured colleague during clashes near the border with Israel, east of Khan Yunis in the southern Gaza Strip on May 15, 2018, amidst protests marking 70th anniversary of Nakba – also known as Day of the Catastrophe in 1948 – and against the US' relocation of its embassy from Tel Aviv to Jerusalem. (Photo by Said Khatib/AFP Photo) 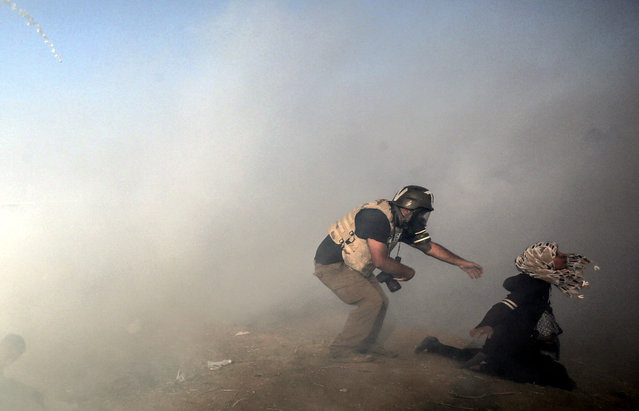 A photojournalist trying to help a female protester after Israelis fire tear-gas during clashes near the border with Israel in the east of Gaza Strip, 15 May 2018. At least 62 Palestinian protesters were killed and more than 2,500 others were injured at the Gaza-Israeli border during clashes against the US embassy move to Jerusalem as well as marking the Nakba Day. Palestinians are marking the Nakba Day, or the day of the disaster, when more than 700 thousand Palestinians were forcefully expelled from their villages during the war that led to the creation of the state of Israel on 15 May 1948. Protesters call for the right of Palestinians to return to their homeland. (Photo by Mohammed Saber/EPA/EFE) 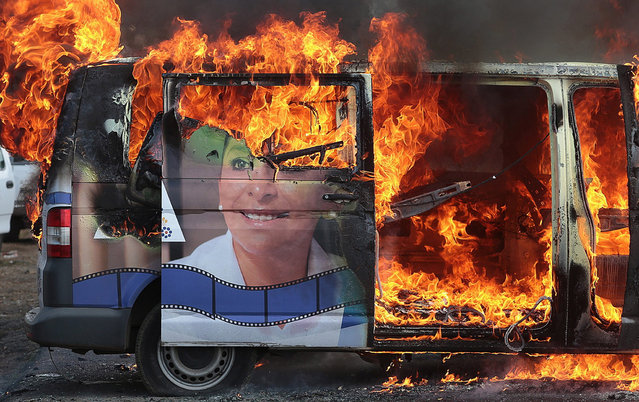 A vehicle of the senator candidate for the coalition “Michoacan al Frente” Alma Mireya Gonzalez Sanchez burns during an event during her campaign the municipality of Nahuatzen, Michoacan, Mexico, 15 May 2018. The vehicle was set on fire by local residents among rising tensions ahead of the elections that will take place on 01 July 2018 to elect the president of Mexico, the deputies, the senators, eight governors and the head of government of Mexico City, among other 3,400 positions. (Photo by Ivan Villanueva/EPA/EFE) 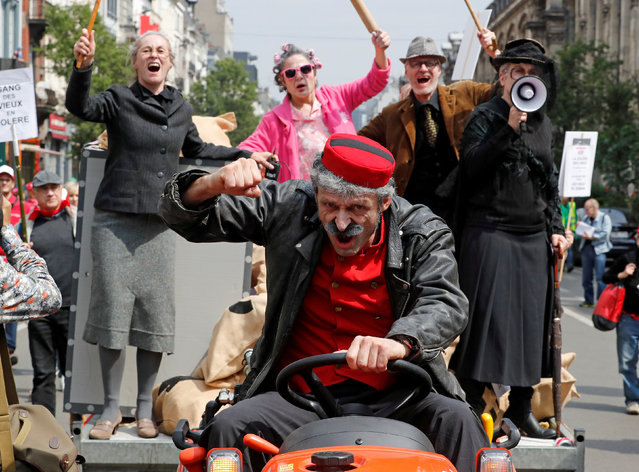 Belgian workers and employees take part in a protest against planned pension reforms in central Brussels, Belgium May 16, 2018. (Photo by Yves Herman/Reuters) 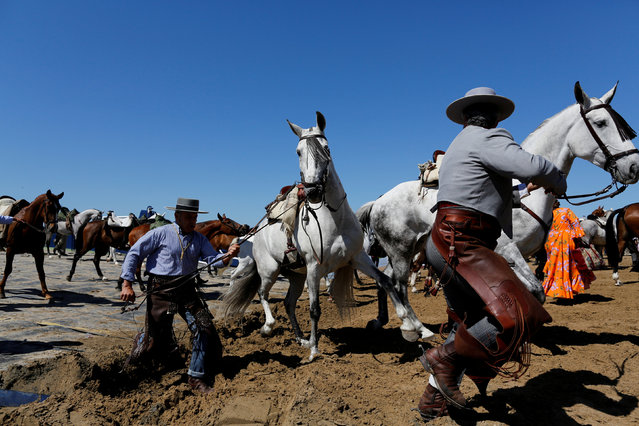 Pilgrims pull their horses on their way to the shrine of El Rocio in Donana National Park, southern Spain May 16, 2018. (Photo by Marcelo del Pozo/Reuters) 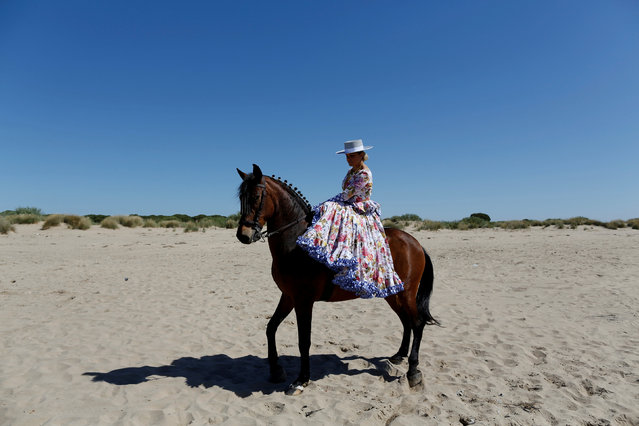 Pilgrim Aroa Canales, 30, poses for a portrait on her way to the shrine of El Rocio in Donana National Park, southern Spain May 16, 2018. (Photo by Marcelo del Pozo/Reuters) 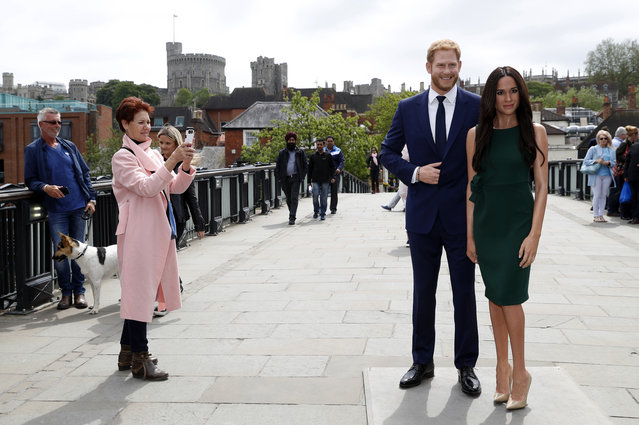 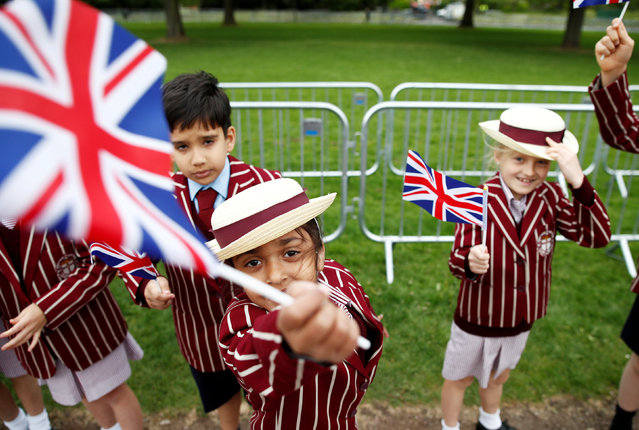 School children in uniform wave Union Flags outside Windsor Castle ahead of Britain's Prince Harry and Meghan Markle's wedding, in Windsor, May 16, 2018. (Photo by Damir Sagolj/Reuters) 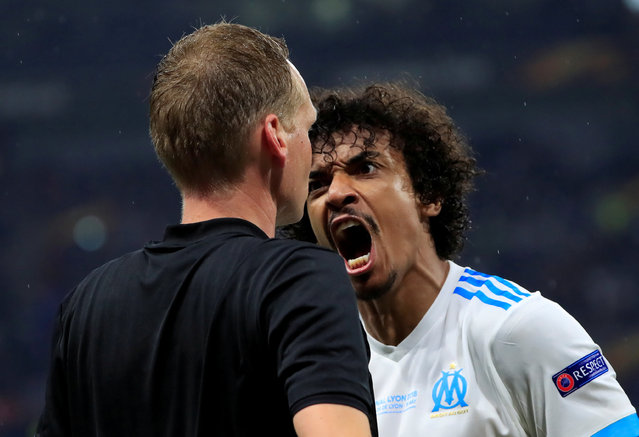 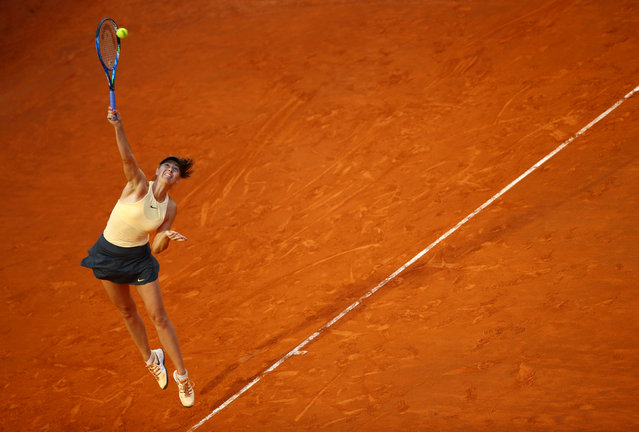 Maria Sharapova of Russia in action against Dominika Cibulkova of Slovakia during day four of the Internazionali BNL d'Italia 2018 tennis at Foro Italico on May 16, 2018 in Rome, Italy. (Photo by Tony Gentile/Reuters) 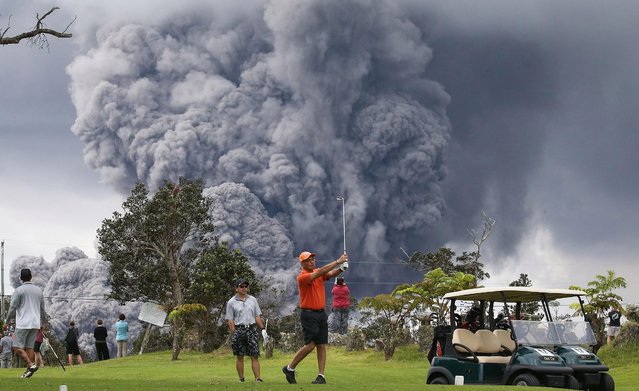 People play golf as an ash plume rises in the distance from the Kilauea volcano on Hawaii's Big Island on May 15, 2018 in Hawaii Volcanoes National Park, Hawaii. The U.S. Geological Survey said a recent lowering of the lava lake at the volcano's Halemaumau crater 'has raised the potential for explosive eruptions' at the volcano. (Photo by Mario Tama/Getty Images) 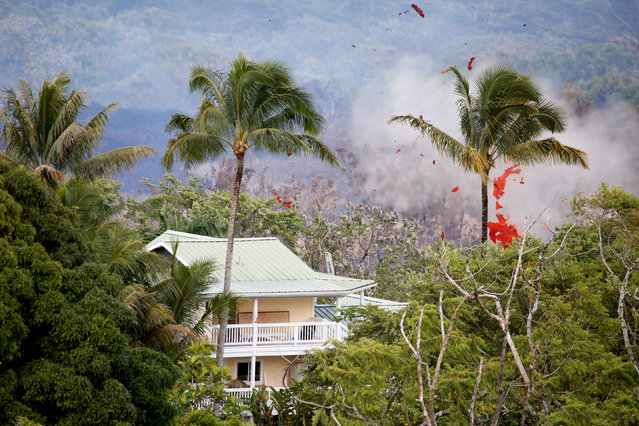 Smoke and lava erupt from a fissure near a home on the outskirts of Pahoa during ongoing eruptions of the Kilauea Volcano in Hawaii on May 16, 2018. (Photo by Terray Sylvester/Reuters) 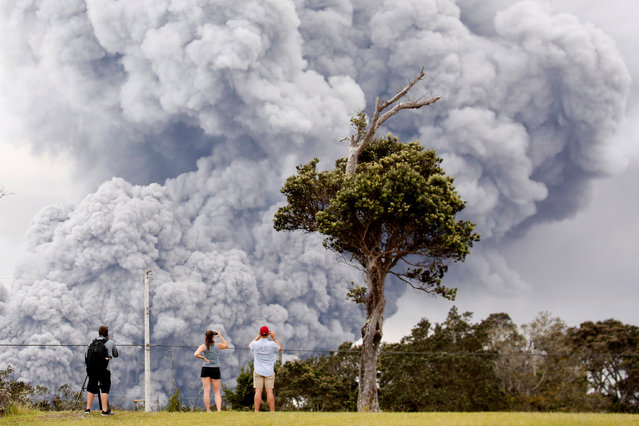 People watch as ash erupts from the Halemaumau crater near the community of Volcano during ongoing eruptions of the Kilauea Volcano in Hawaii on May 16, 2018. (Photo by Terray Sylvester/Reuters) 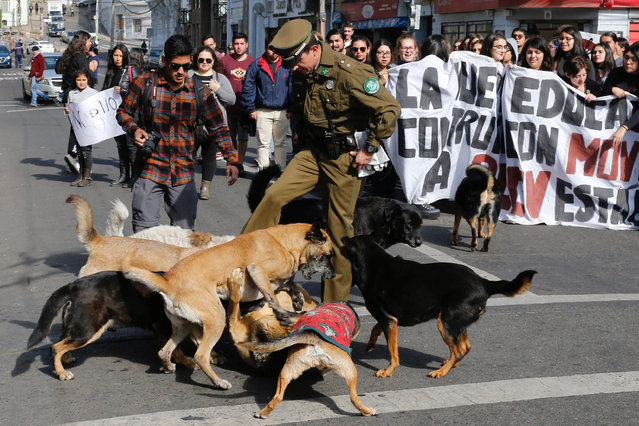 A police officer tries to separate stray dogs during a rally demanding an end to sexism and gender violence in education in Valparaiso, Chile on May 16, 2018. (Photo by Rodrigo Garrido/Reuters) 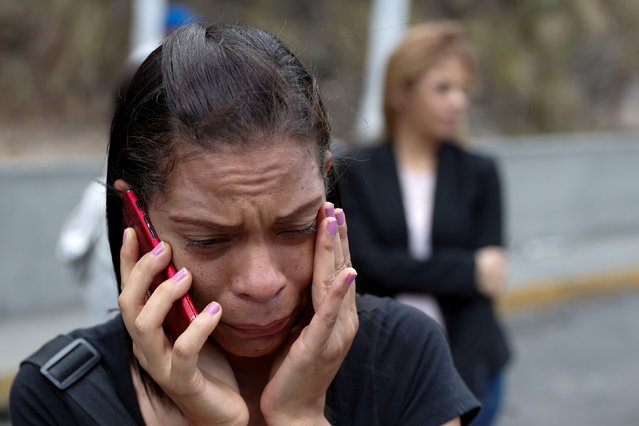 A relative of an inmate cries outside a detention center of the Bolivarian National Intelligence Service (SEBIN), where a riot occurred, according to relatives, in Caracas, Venezuela May 16, 2018. (Photo by Carlos Garcia Rawlins/Reuters) 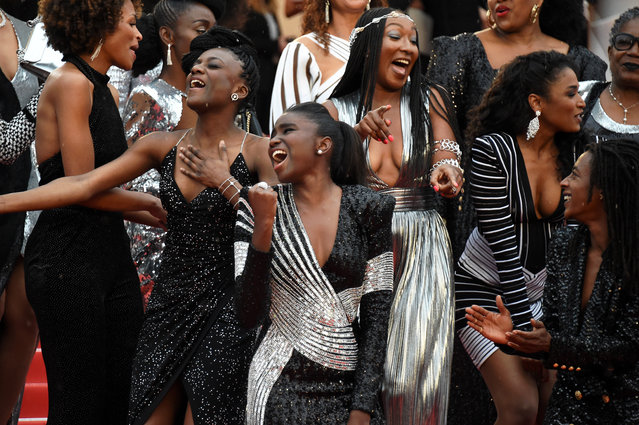 Authors of the book “Noire N'est Pas Mon Métier” (Black is Not My Job) Nadege Beausson-Diagne; Mata Gabin; Maïmouna Gueye; Eye Haïdara; Rachel Khan; Aïssa Maïga; Sara Martins and Marie-Philomène dance on the stairs at the screening of “Burning” during the 71st annual Cannes Film Festival at Palais des Festivals on May 16, 2018 in Cannes, France. (Photo by Nicholas Hunt/Getty Images) 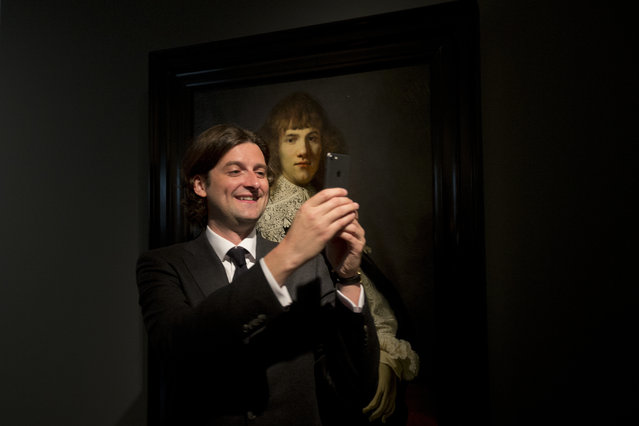 Art dealer Jan Six takes a selfie with a painting attributed to famous Dutch Master Rembrandt after it was put on display at the Hermitage museum in Amsterdam, Netherlands, Wednesday, May 16, 2018. The unsigned painting which will be sold by gallery owner Jan Six, after being exhibit for a month at the Hermitage Amsterdam. (Photo by Peter Dejong/AP Photo) 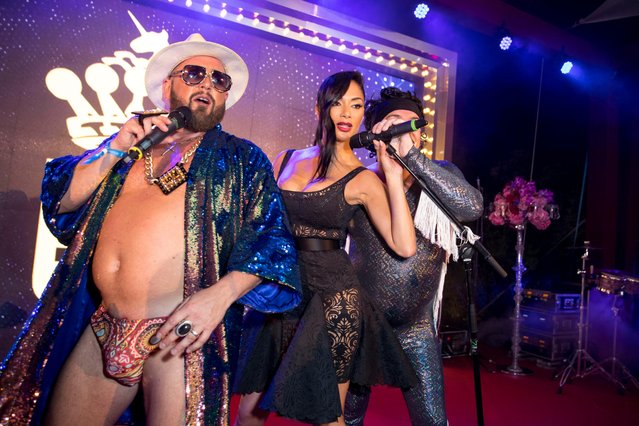