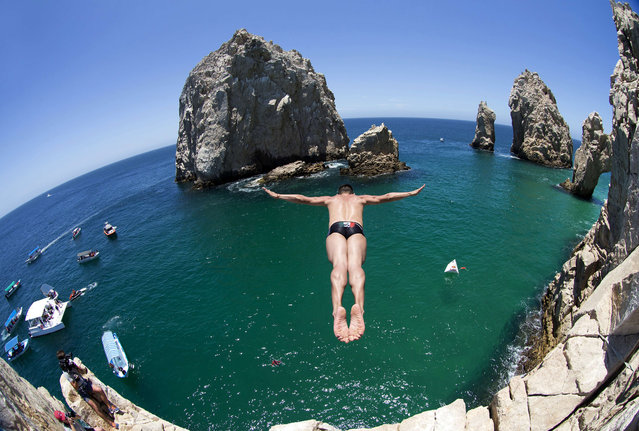 Jonathan Paredes of Mexico dives from the rocks of the Arch of Cabo San Lucas, Mexico during a training session ahead to the 2017 Red Bull Cliff Diving World Series on May 17, 2017. (Photo by Red Bull Content Pool/SIPA/Rex Features/Shutterstock) 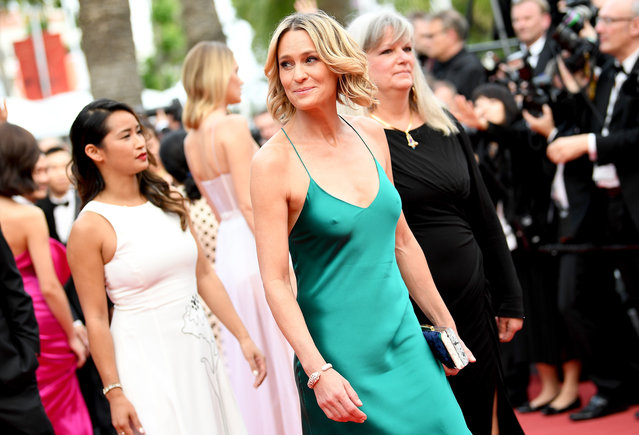 Director Robin Wright of “The Dark of Night” attends the “Loveless (Nelyubov)” screening during the 70th annual Cannes Film Festival at Palais des Festivals on May 18, 2017 in Cannes, France. (Photo by Pascal Le Segretain/Getty Images) 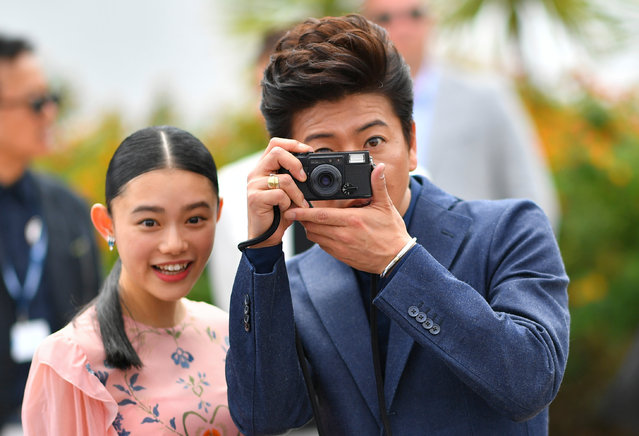 Japanese actor Takuya Kimura (R) takes a photo as Japanese actress Hanna Sugisaki looks on, during photocall on May 18, 2017 for the film “Blade of the Immortal” (Mugen no Junin) at the 70 th edition of the Cannes Film Festival in Cannes, southern France. (Photo by Loic Venance/AFP Photo) 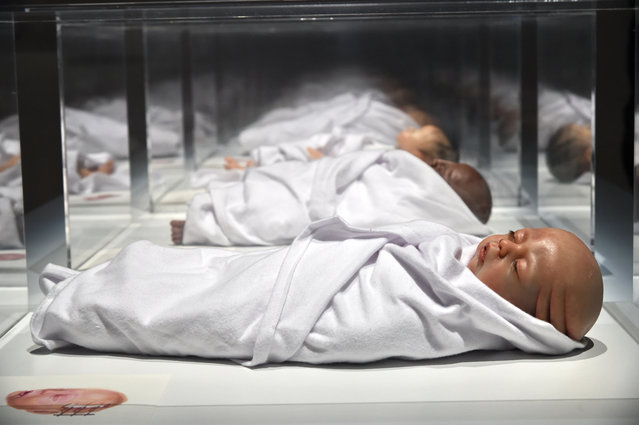 An art installation by Agatha Haines titled Transfiguration are displayed at the Art Science museum in Singapore on May 18, 2017. The exhibits, involving artificial intelligence, life-like robots and genetic modification, are part of HUMAN+, an exhibition of futuristic works from more than 40 international artists, scientists, technologists and designers. (Photo by Roslan Rahman/AFP Photo) 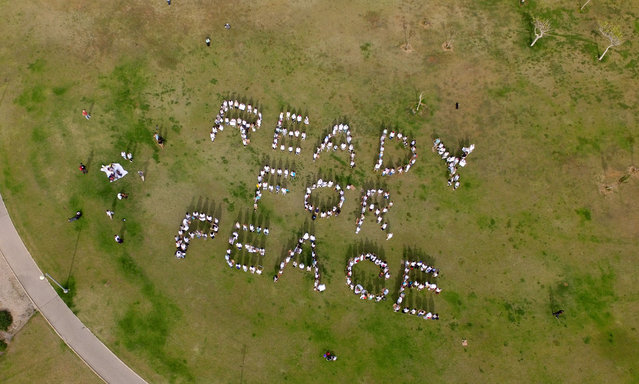 A photo taken with a drone on May 18, 2017 shows women from the “Women Wage Peace” (WWP) group in Midoun Park in the Israeli Mediterranean coastal city of Tel Aviv holding up pieces of cardboard in formation to read “Ready for Peace” in support of the US President' s declarations to do all he can to re- start the peace process when he arrives in Israel next week. (Photo by Jack Guez/AFP Photo) 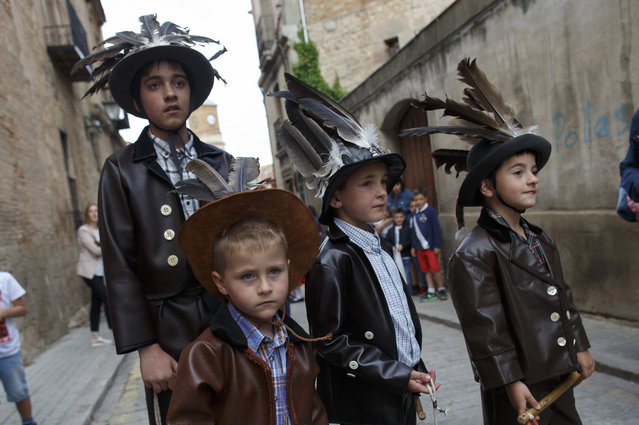 Children dressed as Zarrons prepare to chase other children during the Zarron festival for children on May 17, 2017 in Almazan, Soria province, Spain. El Zarron of Almazan Festival is a shepherds tradition just over 200 hundred years old that honours Saint Pascual Bailon. On its origins shepherds founded a Saint Pascual Bailon brotherhood and started parading a figure representing their Saint around the village. El Zarron is a character that represents the shepherds and wears beard, a hat with vulture feathers and a sheep or fox tail and leather clothes. Members of the brotherhood throw sweets ahead of the procession, and the Zarron has to clear the way of young people with a “zambomba” attached to his stick. (Photo by Pablo Blazquez Dominguez/Getty Images) 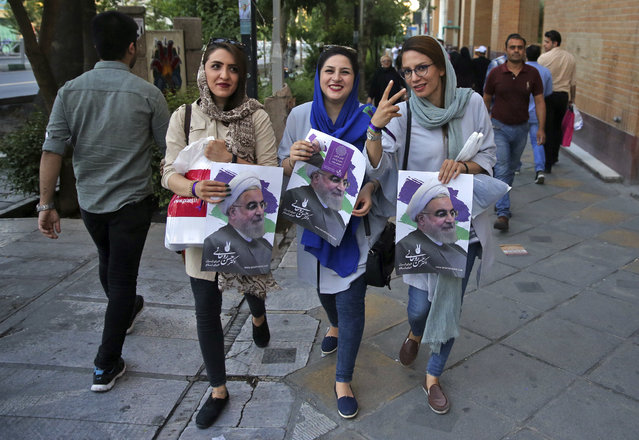 In this photo taken on Wednesday, May 17, 2017, supporters of Iranian President Hassan Rouhani hold posters with his image, during a street campaign ahead the May 19 presidential election in downtown Tehran, Iran. Iranian President Hassan Rouhani staked his political future on opening Iran ever so slightly to the outside world and overcoming hard-liners' opposition to secure a historic nuclear deal in exchange for relief from crippling sanctions. (Photo by Vahid Salemi/AP Photo) 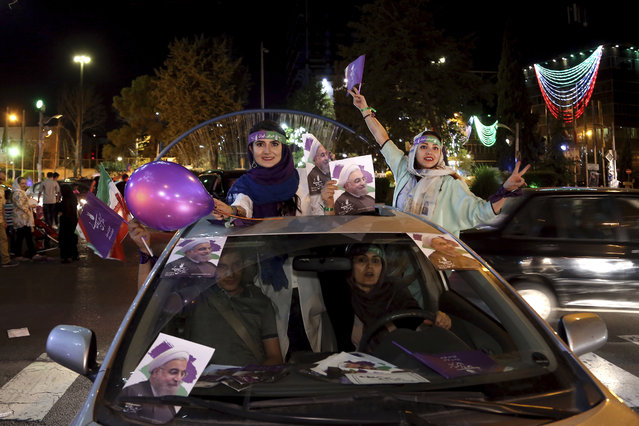 Supporters of Iranian President Hassan Rouhani attend a street campaign ahead the May 19 presidential election in downtown Tehran, Iran, Wednesday, May 17, 2017. President Hassan Rouhani, a moderate, is seeking re-election in a vote that will largely serve as a referendum on his outreach to the West, which culminated in the 2015 nuclear deal with world powers. (Photo by Ebrahim Noroozi/AP Photo) 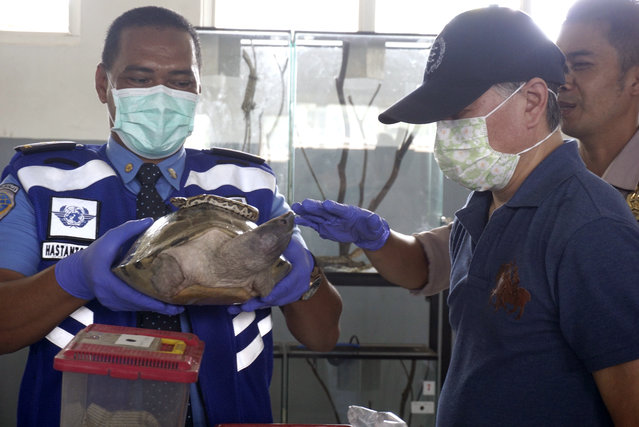 In this May 16, 2017 photo, custom officers show a pig-nosed turtle and a Japanese suspect, Naito Katsuhide, front right, during a press conference at the quarantine facility of Soekarno-Hatta International Airport on the outskirts of Jakarta, Indonesian authorities have arrested a Japanese man who conservationists says is a major player in the illegal wildlife trade for attempting to smuggle more than 250 reptiles out of the country. (Photo by AP Photo/Stringer) 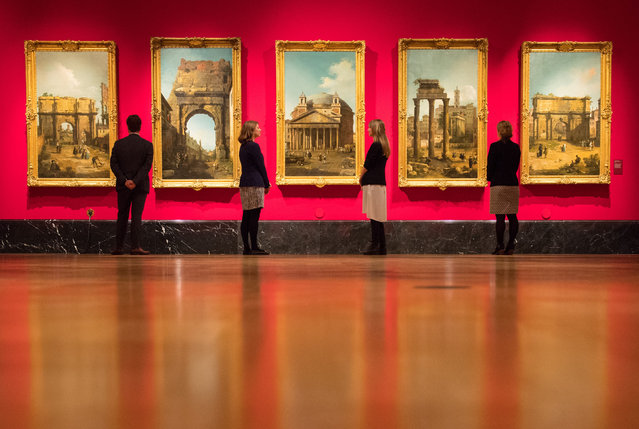 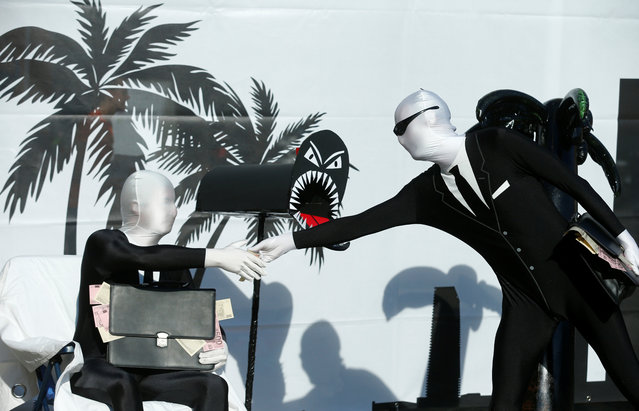 Activists from the anti-globalisation organisation ATTAC demonstrate prior to the annual Deutsche Bank general meeting in Frankfurt, Germany May 18, 2017. (Photo by Ralph Orlowski/Reuters) 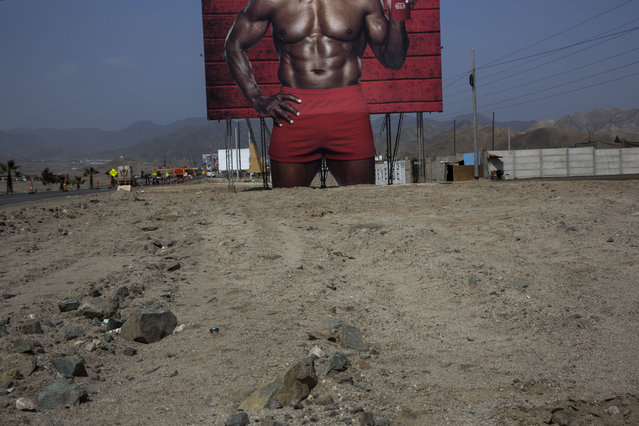 In this May 5, 2017 photo, a billboard advertising a brand of deodorant stands along the Pan American Highway on the south side of Lima, Peru. Wilfredo Ardito, a law professor from the Pontifical Catholic University of Peru who has studied the country's racism, says that advertising in the Andean nation underscores its great inequalities, showing “the ideal world of happiness in which everyone is white and all of those who are not white have disappeared”. (Photo by Rodrigo Abd/AP Photo) 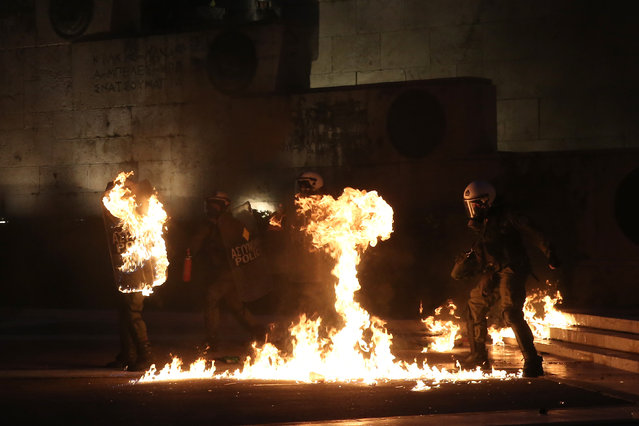 A masked demonstrator throws a petrol bomb to riot police outside the parliament building as Greek lawmakers vote on the latest round of austerity Greece has agreed with its lenders, in Athens, Greece, May 18, 2017. (Photo by Costas Baltas/Reuters) 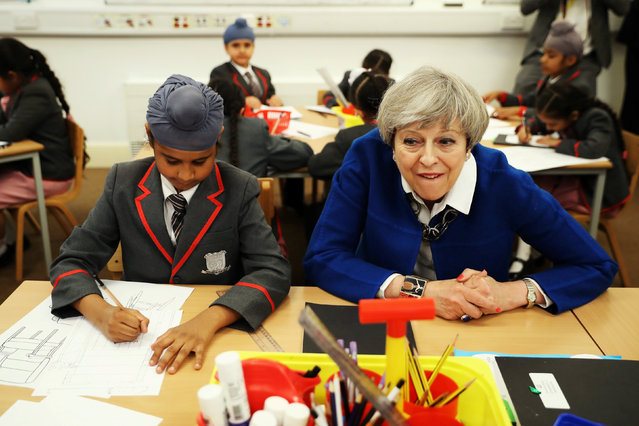 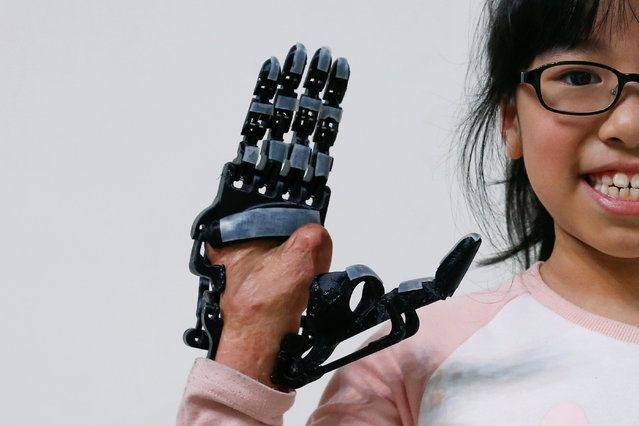 Angel Peng, 8, who injured her hand in a scalding accident when she was nine months old, poses for a photograph wearing a 3D-printed prosthetic hand designed and built by engineer Chang Hsien-Liang, in Taoyuan, Taiwan on May 18, 2017. (Photo by Tyrone Siu/Reuters) 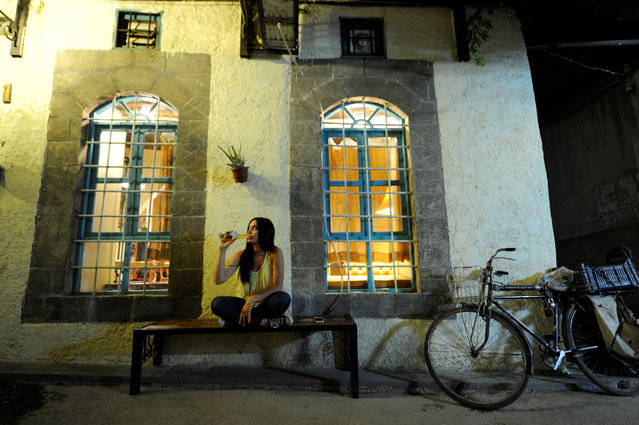 Fine arts graduate Marla Awad, who works at an import and export company, poses for a photograph outside a pub in Old Damascus, Syria on May 18, 2017. “What matters to me was one very negative decision – his refusal to allow the Syrians to immigrate to America in a racist way, because travelling to it was a dream for me to fulfil my ambitions to study and work”, Awad said. (Photo by Omar Sanadiki/Reuters) 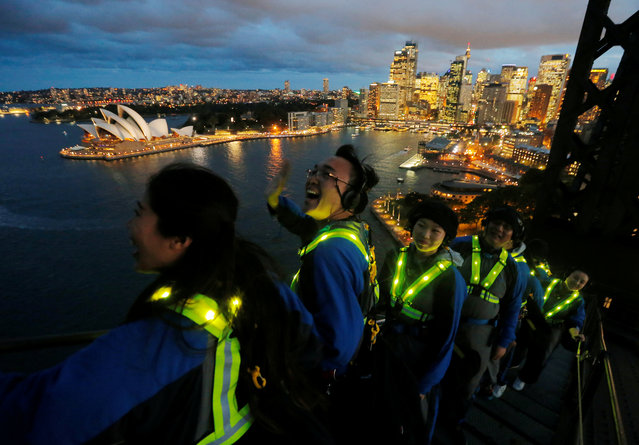 Participants wear glowing vests as they look out to the Sydney Opera House from the Sydney Harbour Bridge in Australia during a press preview of the Vivid Climb Mandarin for Chinese-language tours of the Sydney icon on May 18, 2017. (Photo by Jason Reed/Reuters) 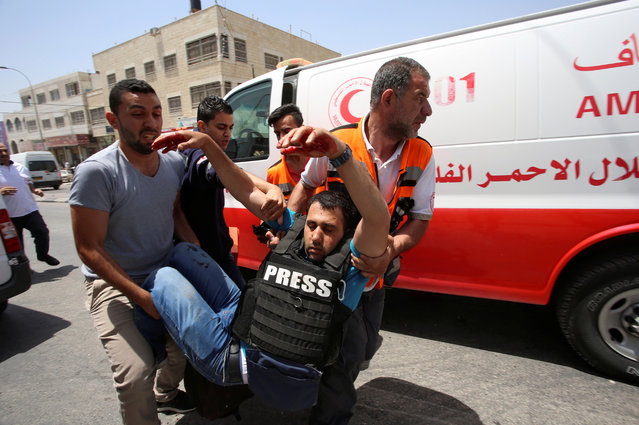 A wounded photographer is evacuated during clashes between Palestinians and Israelis near the Hawara checkpoint near the West Bank city of Nablus on May 18, 2017. (Photo by Reuters/Stringer) 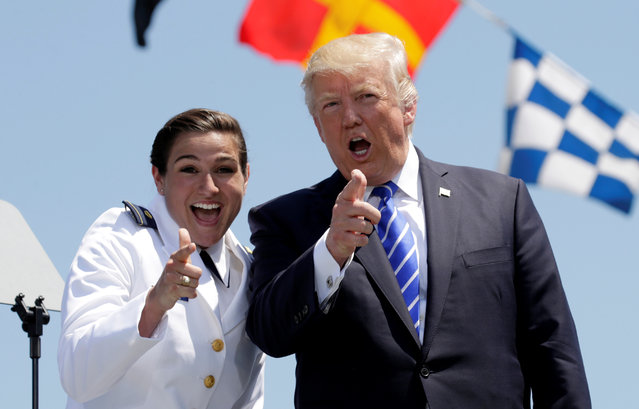 President Trump poses onstage with graduate Erin Reynolds after she received her U.S. Coast Guard Academy diploma during commencement ceremonies in New London, Connecticut on May 17, 2017. (Photo by Kevin Lamarque/Reuters) 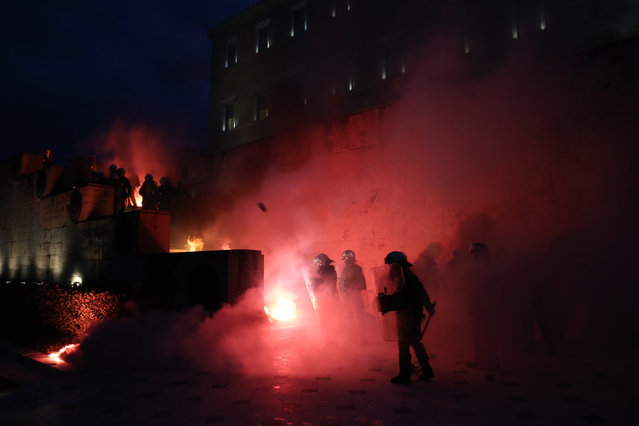 Riot police stand among flare smoke on the Tomb of the Unknown Soldier burns during clashes outside the parliament building as Greek lawmakers vote on the latest round of austerity Greece has agreed with its lenders, in Athens, Greece on May 18, 2017. (Photo by Costas Baltas/Reuters) 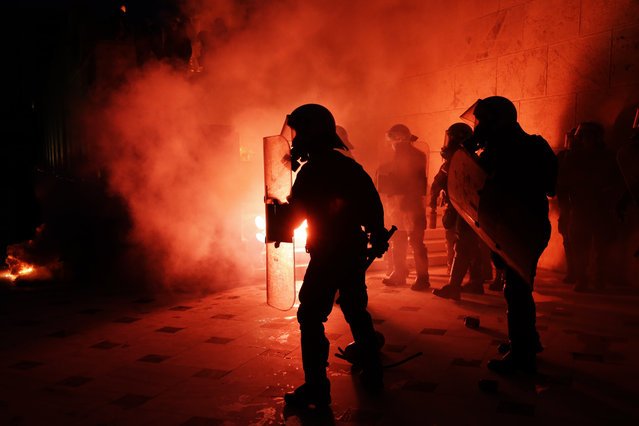 Flares are thrown to police officers in riot gear standing in front of the Greek Parliament during a rally against new austerity measures in Athens, Thursday, May 18, 2017. Protesters took to the streets of central Athens for the second day running Thursday, hours before lawmakers vote in parliament on measures that will impose additional income losses for many Greeks for another three years. (Photo by Yorgos Karahalis/AP Photo) 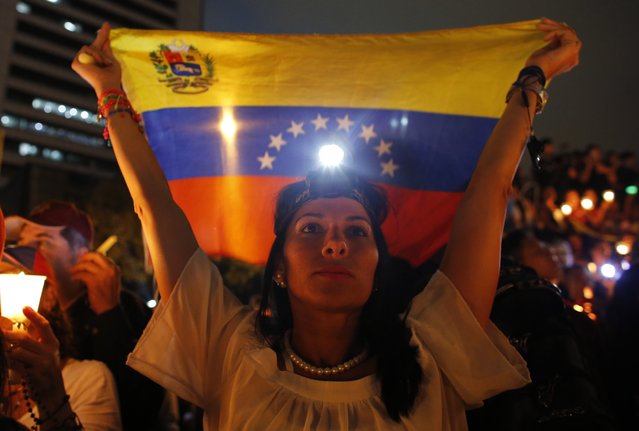 A demonstrator holds a Venezuelan flag during a vigil for the victims of the clashes with the government's security forces, during protest against President Nicolas Maduro in Caracas, Venezuela, Wednesday, May 17, 2017. Several humanitarian organizations and the opposition have accused the security forces of using too much violence during demonstrations against the government, which have left dozens dead. (Photo by Ariana Cubillos/AP Photo) 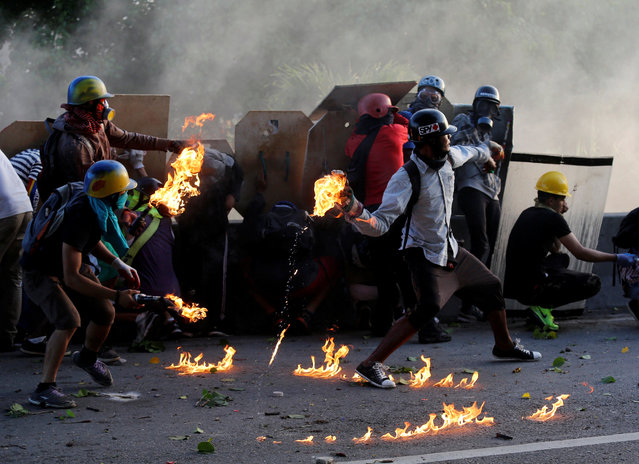 An opposition supporter throws a petrol bomb while clashing with riot security forces during a rally against President Nicolas Maduro in Caracas, Venezuela, May 18, 2017. (Photo by Marco Bello/Reuters) 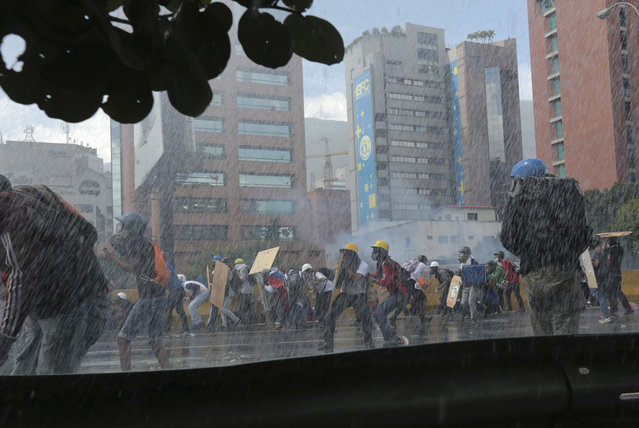 Anti-government protesters shield themselves from sprays of water as security forces try to disperse them, in Caracas, Venezuela, Thursday, May 18, 2017. The protest in Caracas comes after a tumultuous 24 hours of looting and protests in the western state of Tachira that led the government to send in troop reinforcements. More than 40 people have been killed in almost two months of unrest in Venezuela. (Photo by Fernando Llano/AP Photo) 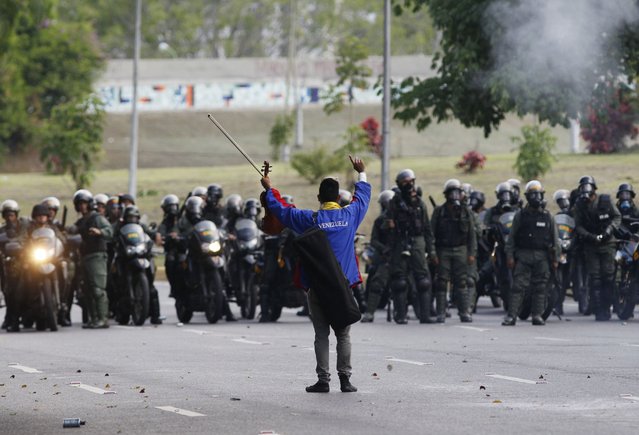 An anti-government protester raises his violin before National Guards, as he yells not to shoot at protesters, creating a brief pause during clashes in Caracas, Venezuela, Thursday, May 18, 2017. (Photo by Ariana Cubillos/AP Photo) 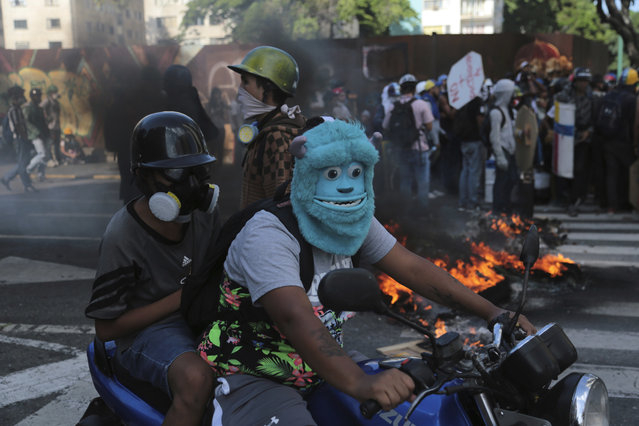 An anti-government protester wearing a mask depicting the Monster Inc. character Sulley drives a motorbike through a barricade set up by fellow protesters, in Caracas, Venezuela, Thursday, May 18, 2017. (Photo by Fernando Llano/AP Photo) 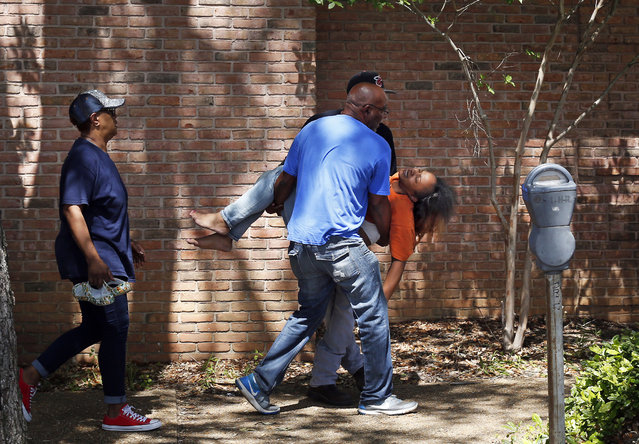 Family members carry a grief stricken Ebony Archie, mother of Kingston Frazier, after learning the young boy was found dead after being kidnapped during the theft of his mother's vehicle from a Kroger parking lot, Thursday, May 18, 2017, in Jackson, Miss. (Photo by Elijah Baylis/The Clarion-Ledger via AP Photo) 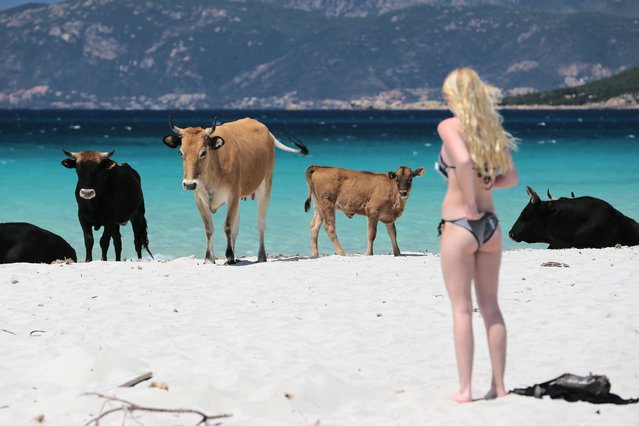 A woman looks at cows on the Mare e Sol beach in Coti-Chiavari, on the French Mediterranean island of Corsica, on May 17, 2017. A herd of some thirty wild cattle take up their summer residence on stretch of beach each year. (Photo by Pascal Pochard-Casabianca/AFP Photo) 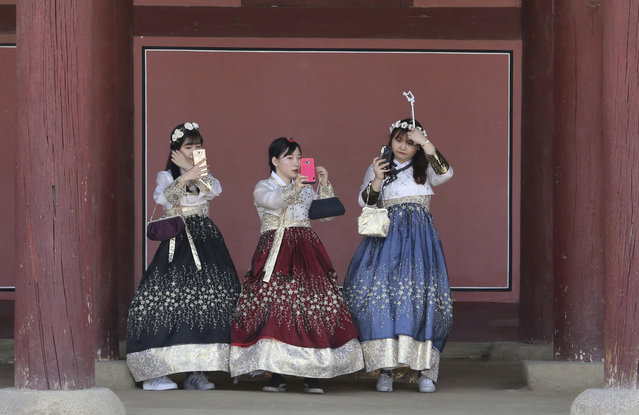