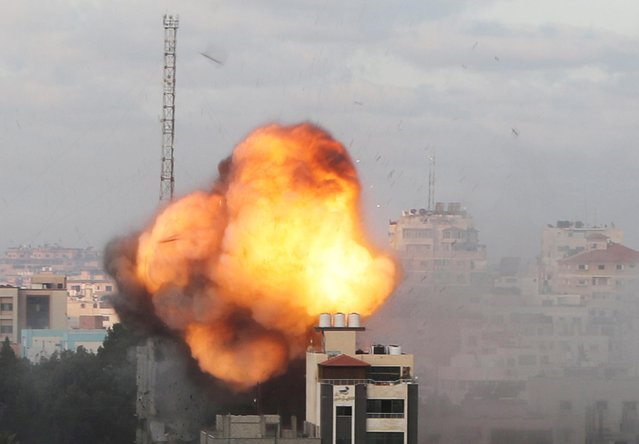 Smoke and flames are seen following an Israeli air strike on a building, amid a flare-up of Israeli-Palestinian fighting, in Gaza City on May 18, 2021. (Photo by Mohammed Salem/Reuters) 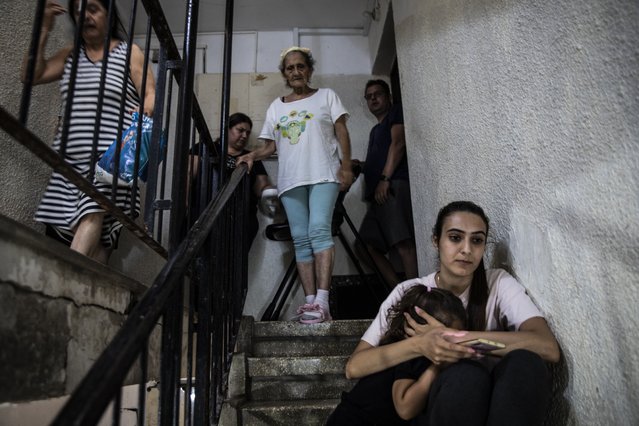 People in Ashdod, Israel take shelter in the stairwell of their apartment building during a siren warning of rockets fired from Gaza to Israel on May 18, 2021. (Photo by Heidi Levine/AP Photo) 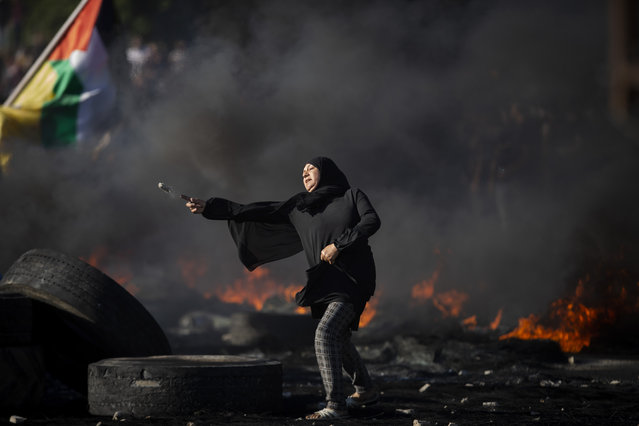 Palestinians clash with Israeli forces at the Hawara checkpoint, south of the West Bank city of Nablus, Tuesday, May 18, 2021. (Photo by Majdi Mohammed/AP Photo) 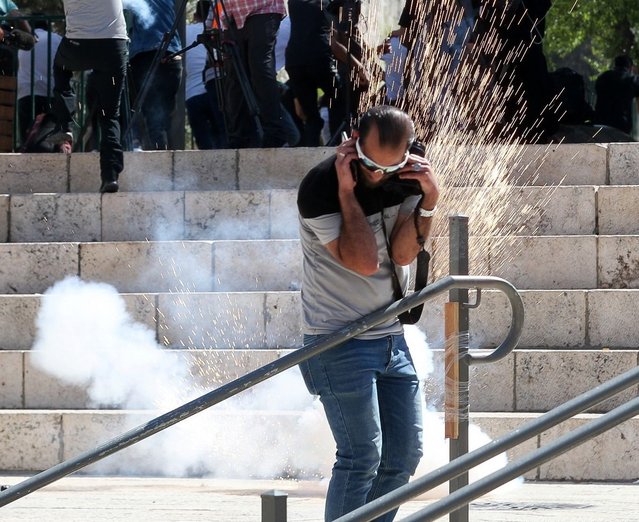 People react to a stun grenade fired by Israeli police officers during a demonstration held by Palestinians to show their solidarity amid Israel-Gaza fighting, at Jerusalem's Old City, May 18, 2021. (Photo by Ammar Awad/Reuters) 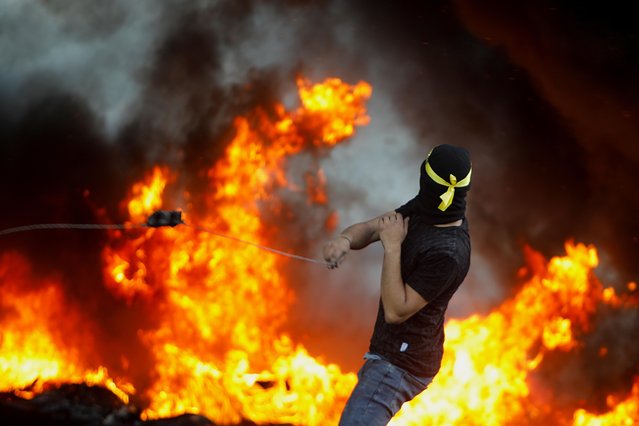 A Palestinian demonstrator takes part in an anti-Israel protest over a cross-border violence between Palestinian militants in Gaza and the Israeli military, near Hawara checkpoint near Nablus in the Israeli-occupied West Bank, May 18, 2021. (Photo by Raneen Sawafta/Reuters) 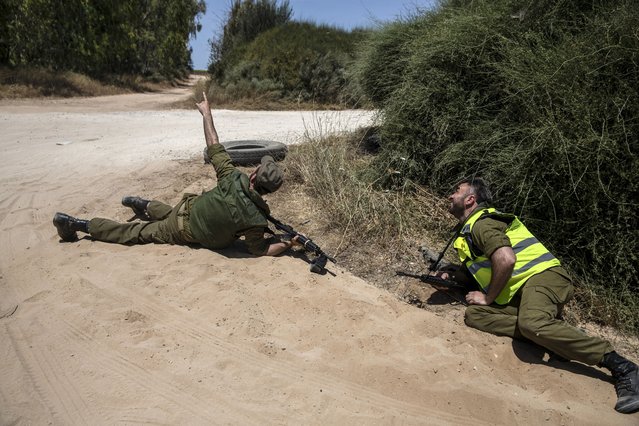 Israeli soldiers take cover on the ground as a siren sounds a warning of incoming rockets fired from the Gaza Strip, near the Israeli-Gaza border, in southern Israel, Monday, May 17, 2021. (Photo by Heidi Levine/AP Photo) 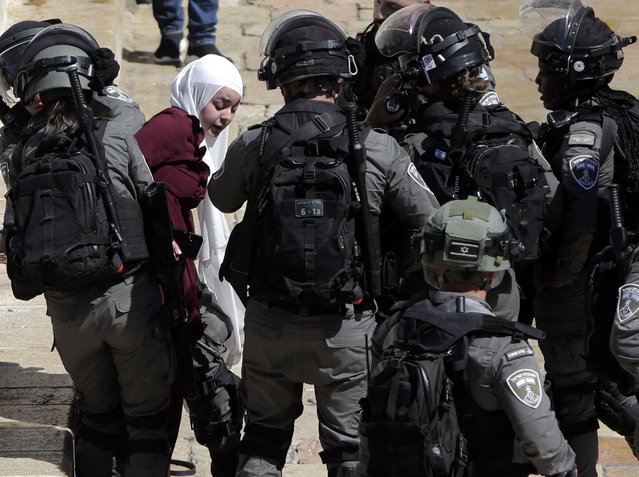 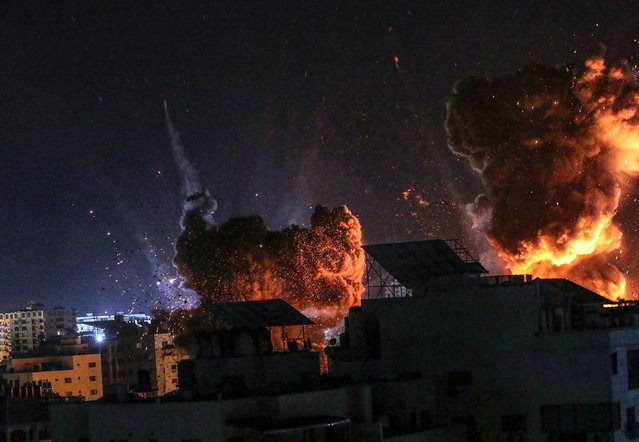 Smoke and flames rise following an Israeli air strike on Gaza City, 18 May 2021. Tensions have escalated in the region, following days of violent confrontations between Israeli security forces and Palestinians in Jerusalem, leading to the heaviest offensive in years. (Photo by Mohammed Saber/EPA/EFE) 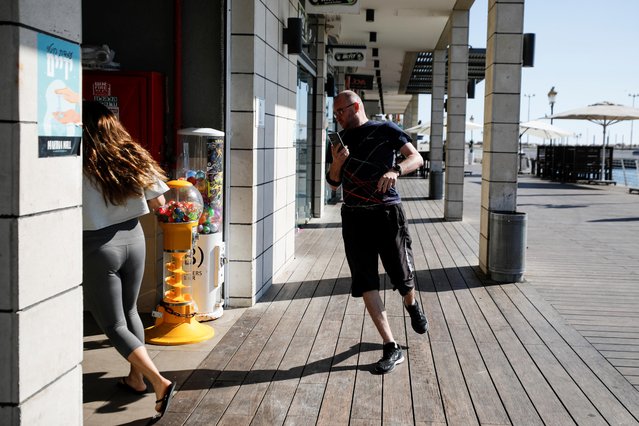 People run towards a bomb shelter as a siren warning of incoming rockets launched from the Gaza Strip towards Israel sounds, in Ashkelon, southern Israel May 18, 2021. (Photo by Amir Cohen/Reuters) 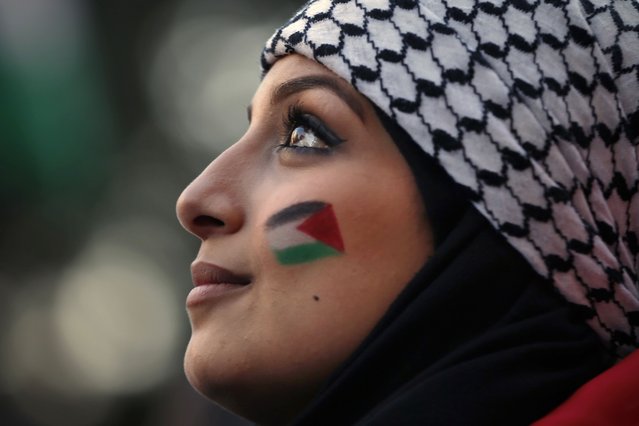 A Palestinian living in Lebanon painted Palestinian flags on her face during a march in support of Palestinians, in Beirut, Lebanon, Tuesday, May 18, 2021. (Photo by Bilal Hussein/AP Photo) 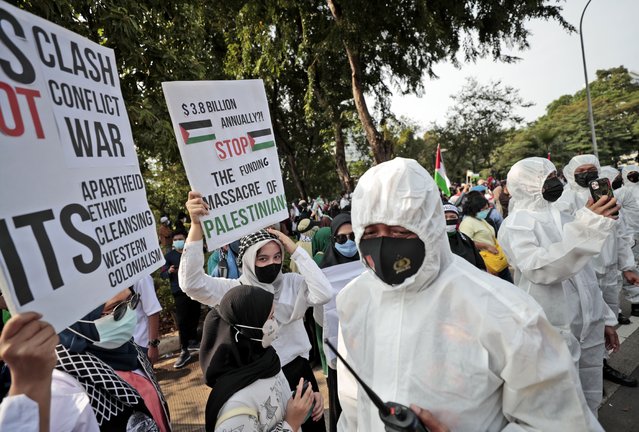 Police officers in protective suits call on protesters to maintain physical distancing to help curb the spread of coronavirus during an anti-Israel rally outside the U.S. Embassy in Jakarta, Indonesia, Tuesday, May 18, 2021. Pro-Palestinian protesters marched to the heavily guarded embassy on Tuesday to demand an end to Israeli airstrikes in the Gaza Strip. (Photo by Dita Alangkara/AP Photo) 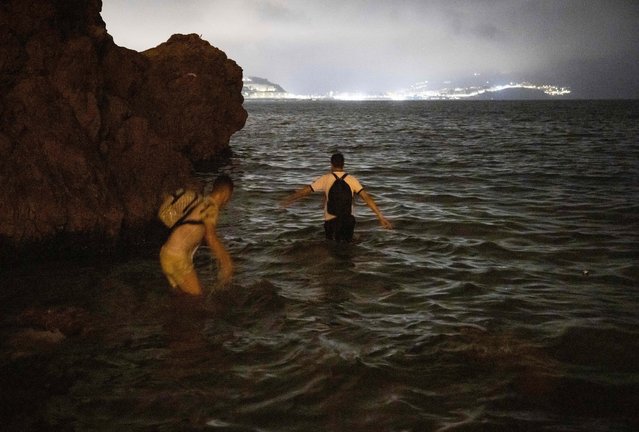 Moroccan migrants walk into shallow waters on the shore of the northern town of Fnideq as they attempt to cross the border from Morocco to Spain's North African enclave of Ceuta on May 18, 2021. At least 5,000 migrants, an unprecedented influx at a time of high tension between Madrid and Rabat, slipped into Ceuta on May 17, a record for a single day, Spanish authorities said. They reached the enclave by swimming or by walking at low tide from beaches a few kilometres to the south, some using inflatable swimming rings and rubber dinghies. (Photo by Fadel Senna/AFP Photo) 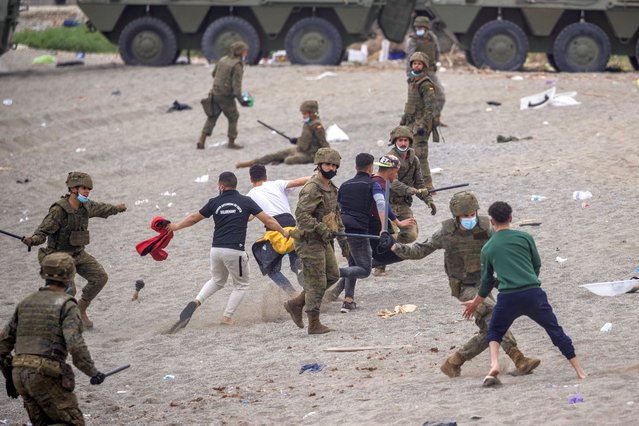 Spanish Army soldiers clash with migrants near the border of Morocco and Spain, at the Spanish enclave of Ceuta, on Tuesday, May 18, 2021. Ceuta, a Spanish city of 85,000 in northern Africa, faces a humanitarian crisis after thousands of Moroccans took advantage of relaxed border control in their country to swim or paddle in inflatable boats into European soil. (Photo by Bernat Armangue/AP Photo) 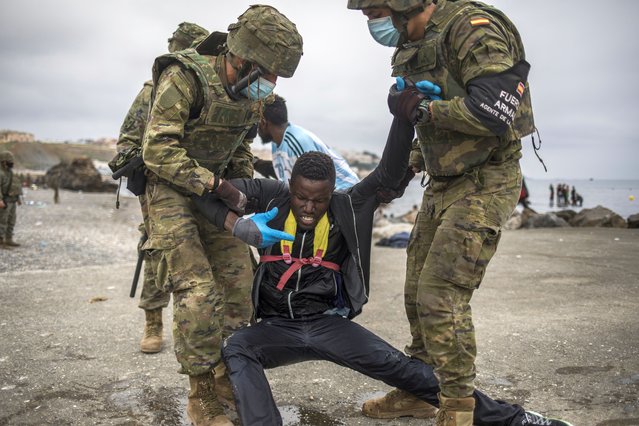 A man is held by soldiers of the Spanish Army at the border of Morocco and Spain, at the Spanish enclave of Ceuta, on Tuesday, May 18, 2021. (Photo by Javier Fergo/AP Photo) 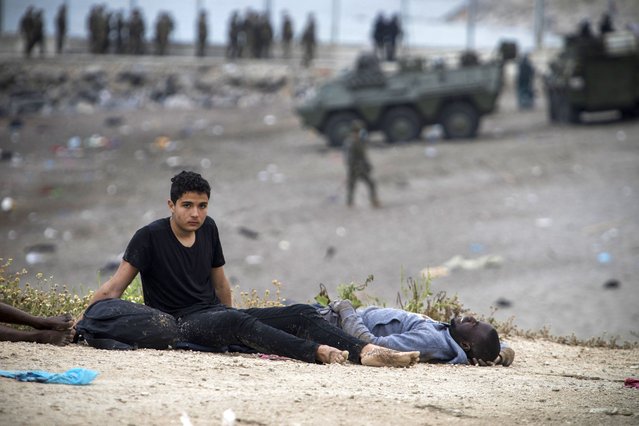 Men sit on the ground after arriving in the Spanish territory at the border of Morocco and Spain, at the Spanish enclave of Ceuta, on Tuesday, May 18, 2021. (Photo by Javier Fergo/AP Photo) 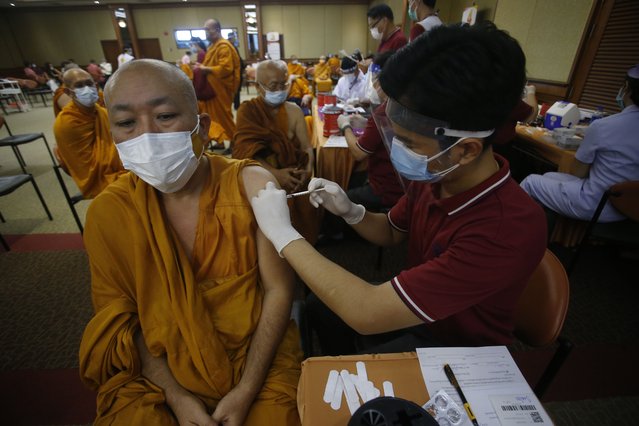 A health worker administers a dose of the Sinovac COVID-19 vaccine to Buddhist monk at Priest Hospital in Bangkok, Thailand Tuesday, May 18, 2021. Thailand had about 7,100 cases, including 63 deaths, in all of last year, in what was regarded as a success story. Taxi drivers are starved for customers, weddings are suddenly canceled, schools are closed, and restaurant service is restricted across much of Asia as the coronavirus makes a resurgence in countries where it had seemed to be well under control. (Photo by Anuthep Cheysakron/AP Photo) 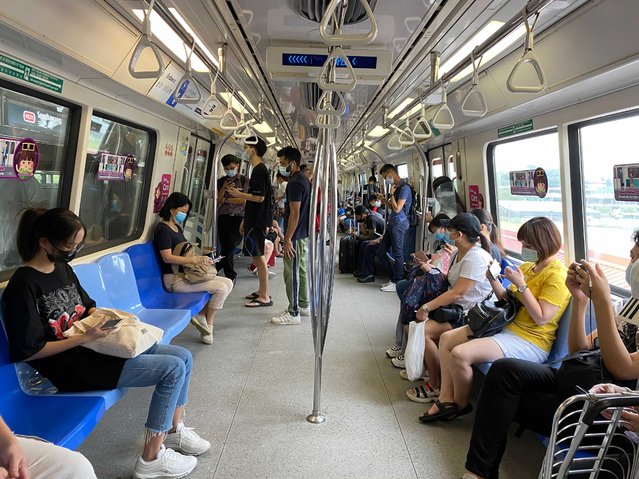 Commuters wear face masks and practice social distancing while onboard a subway Wednesday, May 19, 2021 in Singapore. Across much of Asia, taxi drivers are starved for customers, weddings are suddenly canceled, schools are closed, and restaurant service is restricted as the coronavirus comes surging back in countries where it had seemed to be well under control. (Photo by Zen Soo/AP Photo)
Edit Del
19 May 2021 09:24:00, post received 0 comments
Publication archive:
←   →
Popular tags:
All tags
Last searches: