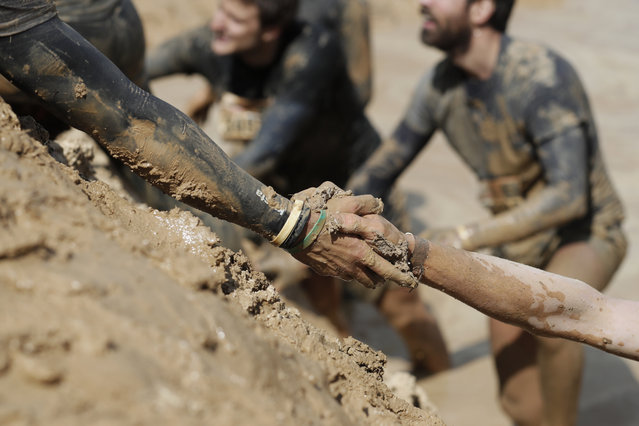 A participant assists another up a hill during the Mud Day Paris 2017 obstacle course in Beynes on April 29, 2017. (Photo by Thomas Samson/AFP Photo) 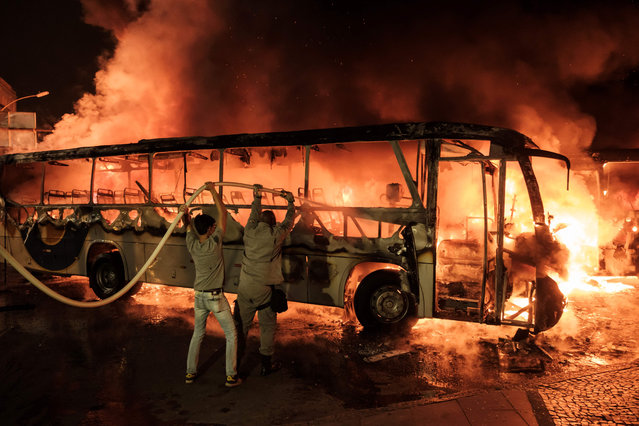 Firefighters try to put out a burning bus set on fire by protesters during the nationwide strike called by unions opposing austerity reforms in Rio de Janeiro, Brazil, on April 28, 2017. Major transportation networks schools and banks were partially shut down across much of Brazil on Friday in what protesters called a general strike against austerity reforms in Latin America' s biggest country. (Photo by Yasuyoshi Chiba/AFP Photo) 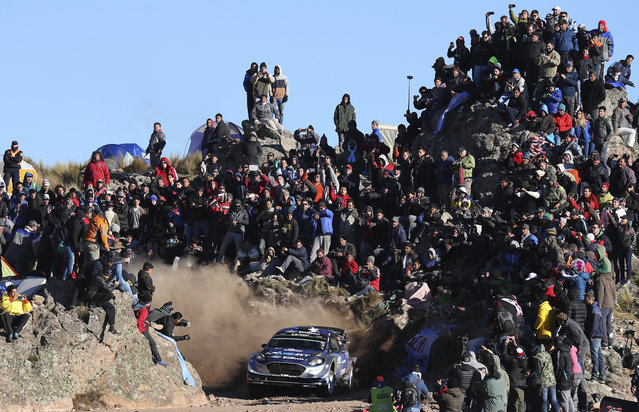 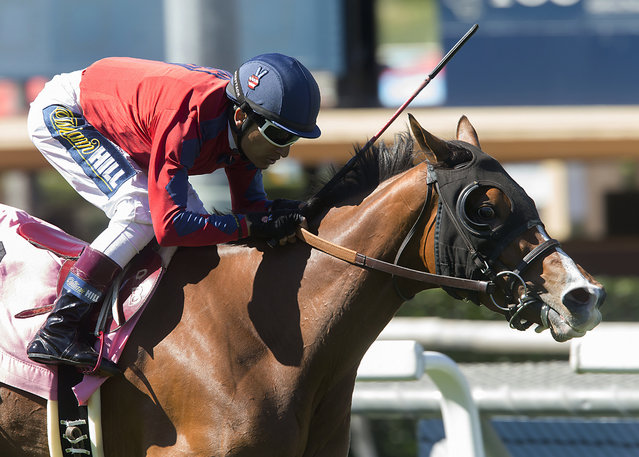 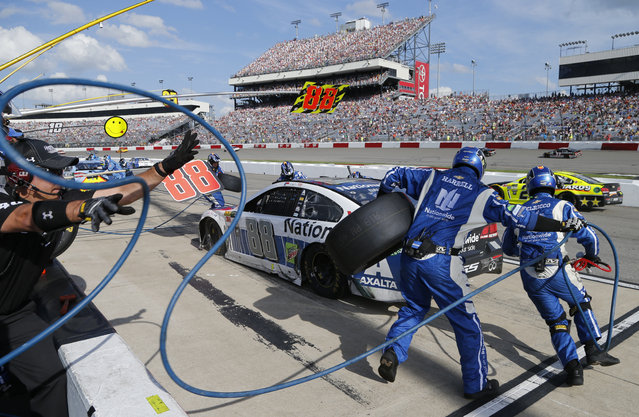 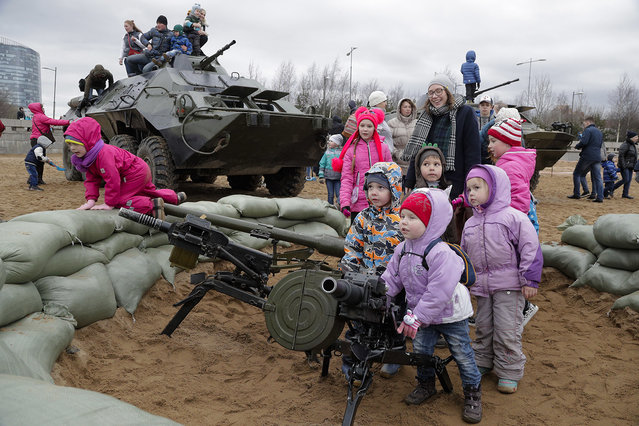 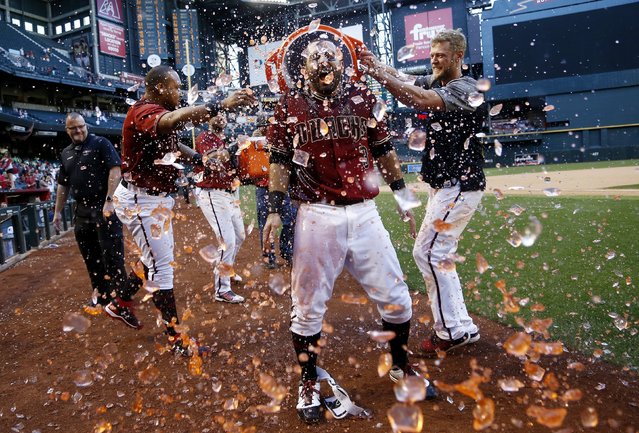 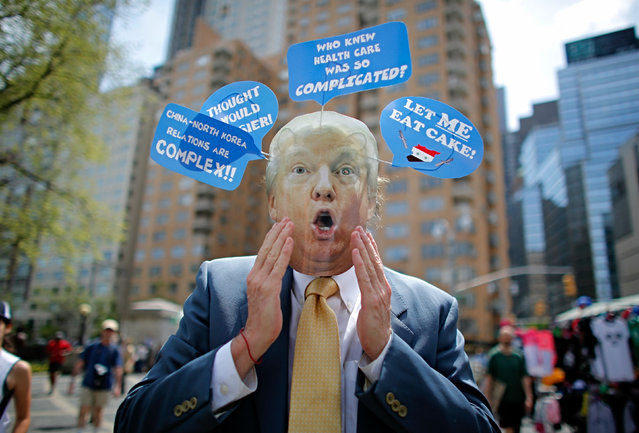 A man wears a mask with the face of US President Donald Trump, as he takes part in the “100 Days of Failure” Protest to mark the first 100 days of the Trump administration on April 29, 2017 in New York. (Photo by Kena Betancur/AFP Photo) 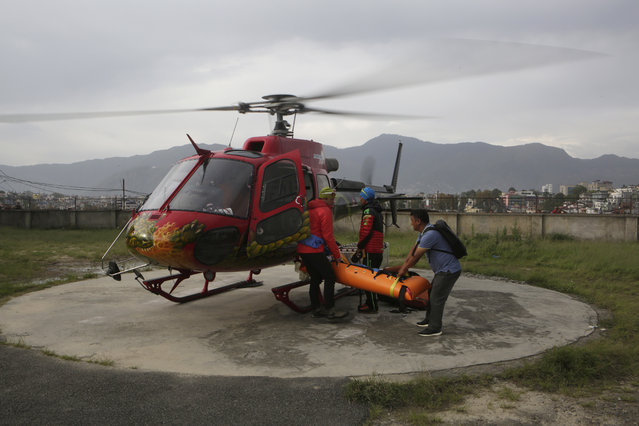 The body of famed Swiss climber Ueli Steck is unloaded from a helicopter at Teaching Hospital in Kathmandu, Nepal, April 30, 2017. 40-year-old Steck, one of the most-renowned mountaineers of his generation, was killed Sunday in a mountaineering accident near Mount Everest in Nepal, expedition organizers said. He was best known for his speed-climbing, including setting several records for ascending the north face of the Eiger, a classic mountaineering peak in the Bernese Alps that he climbed in two hours and 47 minutes without using a rope. (Photo by Niranjan Shrestha/AP Photo) 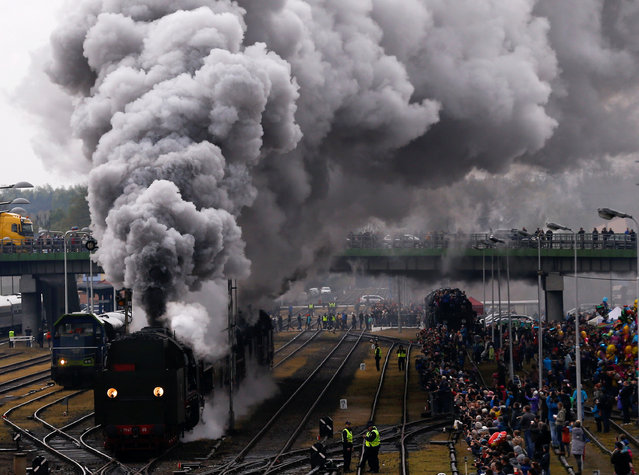 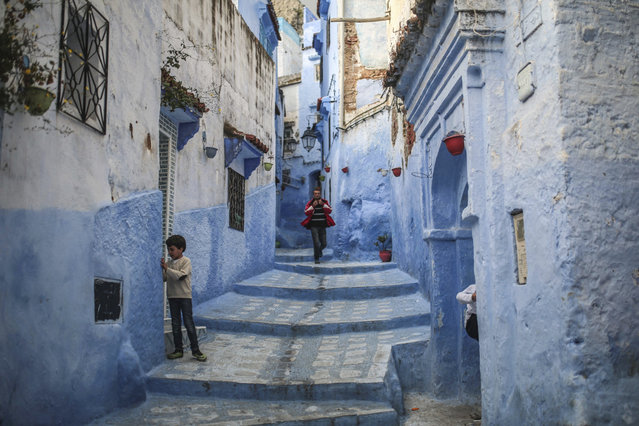 A boy plays outside his house while a man walks down an alleyway in the Medina of Chefchaouen, a picturesque town well-known for its blue painted houses and alleyways, in northern Morocco, Saturday, April 29, 2017. (Photo by Mosa'ab Elshamy/AP Photo) 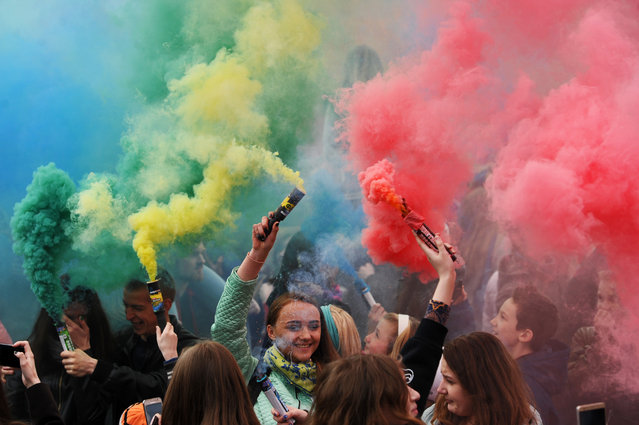 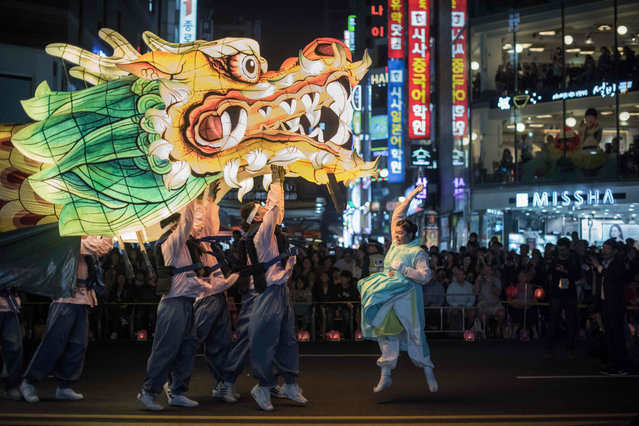 Participants perform a dragon dance as they march during a lantern parade marking the start of a month- long “Lotus Lantern Festival” to celebrate the upcoming Buddha' s birthday, in Seoul on April 29, 2017 Buddha' s birthday falls on May 3. (Photo by Ed Jones/AFP Photo) 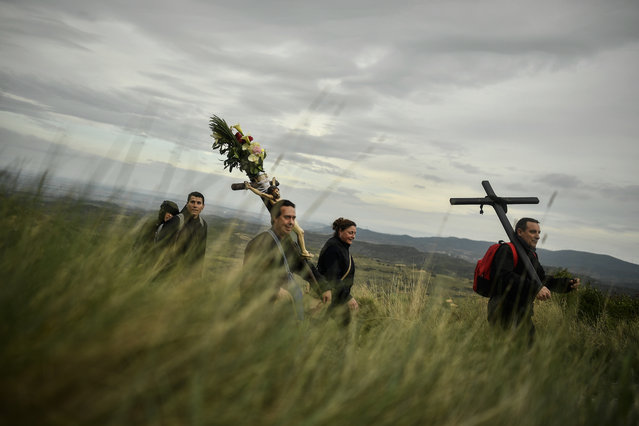 Catholic penitents of the Ujue Virgin carrying a crucifix decorated with flowers take part in a pilgrimage from Tafalla and other villages to the small town of Ujue, northern Spain, Sunday, April 30, 2017. According to tradition, the pilgrimages to Ujue originated in 1043 when the residents of Tafalla made a pilgrimage to Ujue to thank the Virgin for their victory in a battle. (Photo by Alvaro Barrientos/AP Photo) 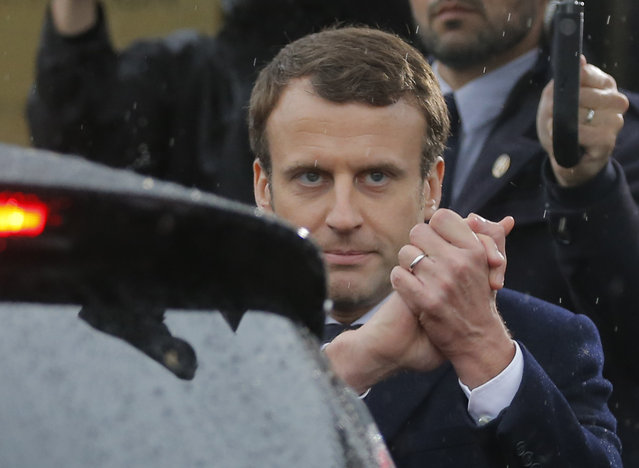 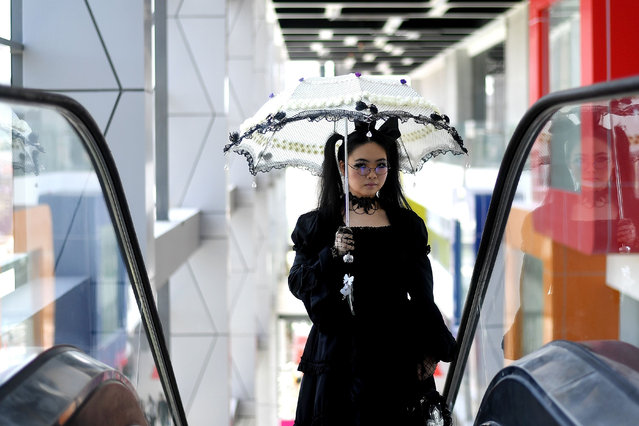 A cosplay enthusiast takes part in the “Hijab Cosplay” event in Subang Jaya, outside of Kuala Lumpur, on April 29, 2017. The event, the first of its kind in Malaysia, is aimed at giving a platform to hijab- wearing Muslim cosplayers in the country. The term, a contraction of “costume player”, indicates the practice of wearing a costume representing a cartoon character or video- games. (Photo by Manan Vatsyayana/AFP Photo) 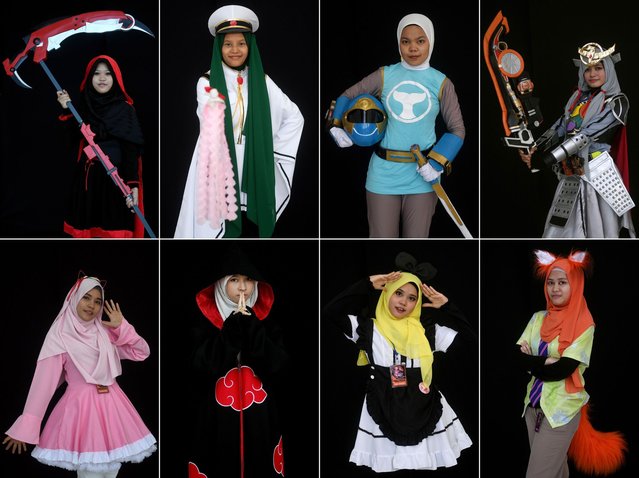 This combination of photographs shows Muslim girls wearing the “hijab” dressed as popular cosplay characters during the “Hijab Cosplay” event in Subang Jaya, outside of Kuala Lumpur, on April 29, 2017. (Photo by Manan Vatsyayana/AFP Photo) 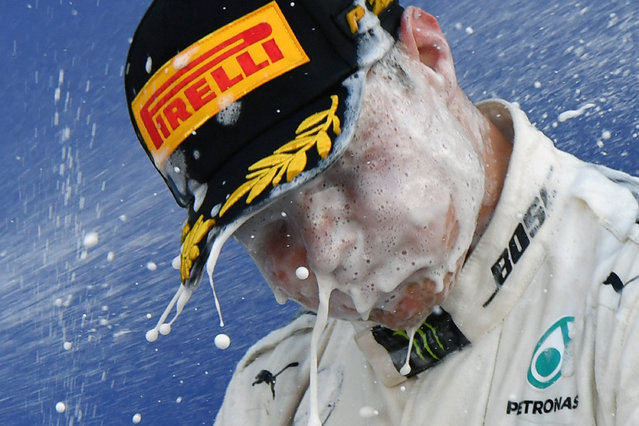 Mercedes' Finnish driver Valtteri Bottas celebrates on the podium after winning the Formula One Russian Grand Prix at the Sochi Autodrom circuit in Sochi on April 30, 2017. (Photo by Andrej Isakovic/AFP Photo) 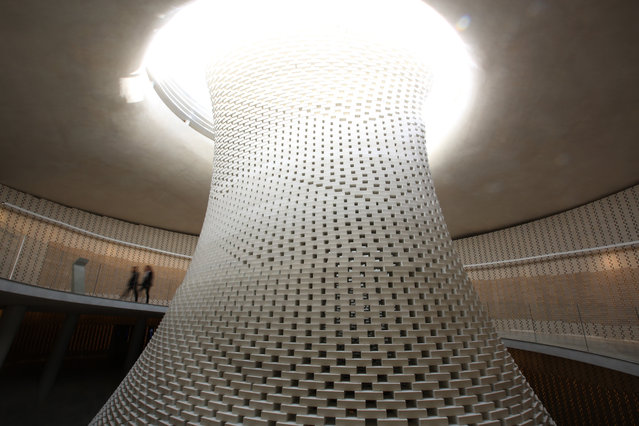 Women walk past a new memorial wall for Israel's fallen servicemen and women, at Mount Herzl in Jerusalem on April 30, 2017. (Photo by Gali Tibbon/AFP Photo) 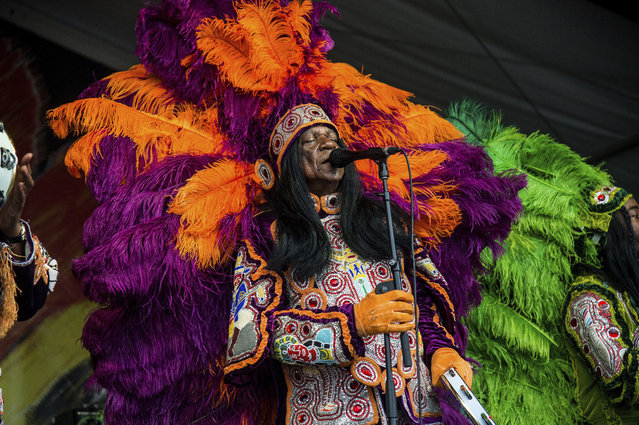 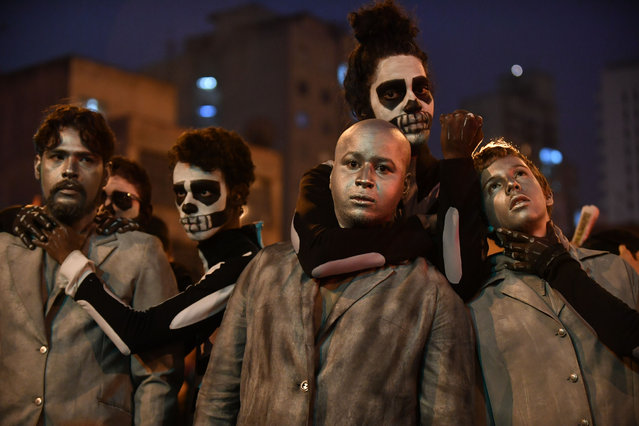 Demonstrators take part in a national strike against a labour and social welfare reform bill that the government of President Michel Temer intends to pass, in Sao Paulo, Brazil, on April 28, 2017. Major transportation networks schools and banks were partially shut down across much of Brazil on Friday in what protesters called a general strike against austerity reforms in Latin America' s biggest country. (Photo by Nelson Almeida/AFP Photo) 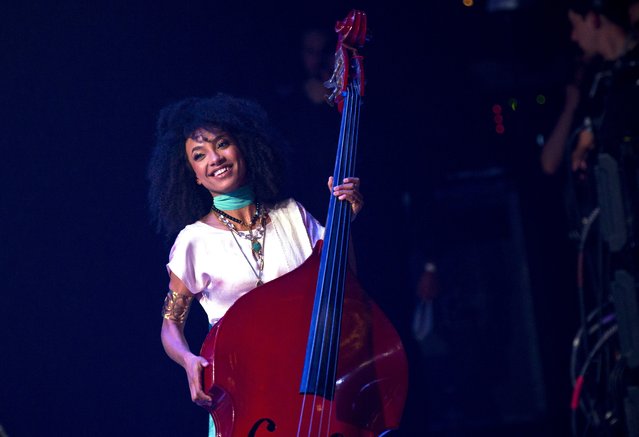 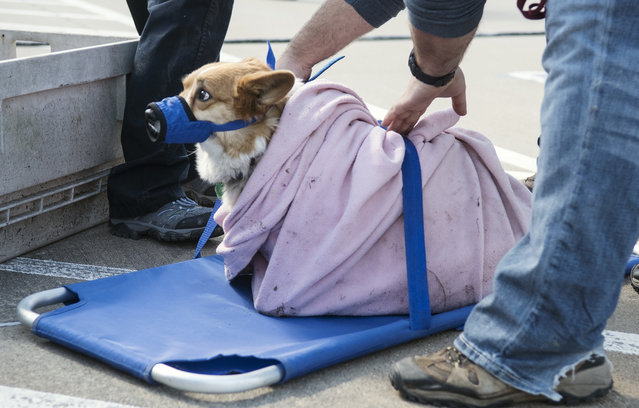 A dog named Denali is lifted onto a stretcher to be treated for a broken leg by Veterinary Emergency Team from Texas A&M as they set up in the Canton Junior High parking lot Sunday, April 30, 2017, in Canton, Texas. Severe storms including tornadoes swept through several small towns in East Texas, killing several people, and leaving a trail of overturned vehicles, mangled trees and damaged homes, authorities said Sunday. (Photo by Sarah A. Miller/Tyler Morning Telegraph) 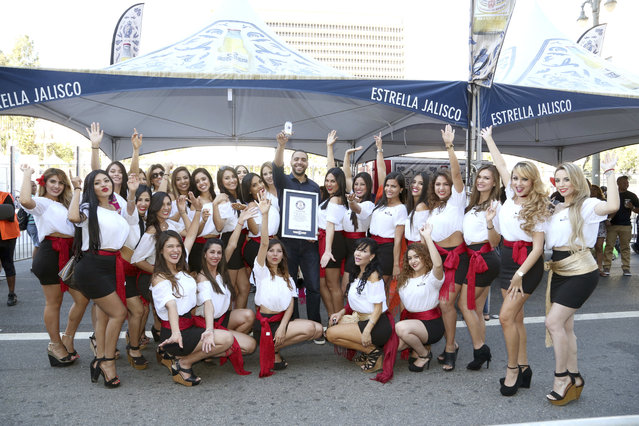 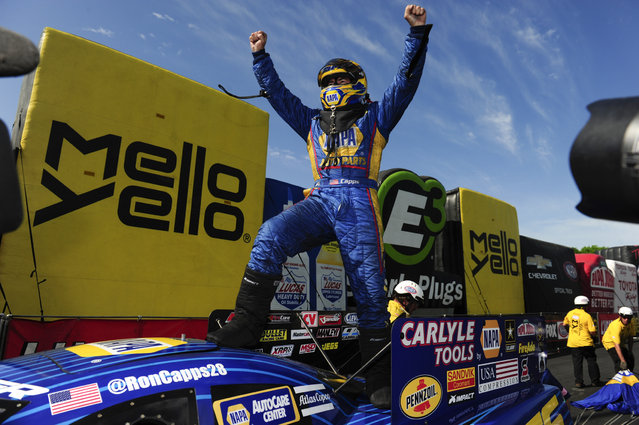 In this photo provided by the NHRA, Ron Capps, the current Funny Car world champion, celebrates after he ran a 3.933 at 322.65 in his Dodge Charger for his first NHRA Four-Wide Nationals win of his career, at zMax Dragway, Concord, N.C., Sunday, April 30, 2017. (Photo by Teresea Long/NHRA via AP Photo) 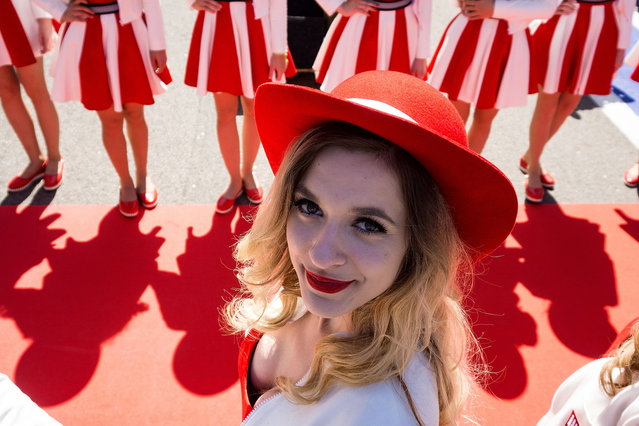