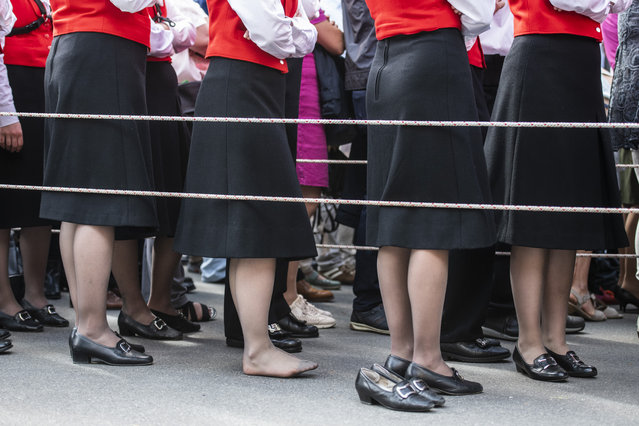 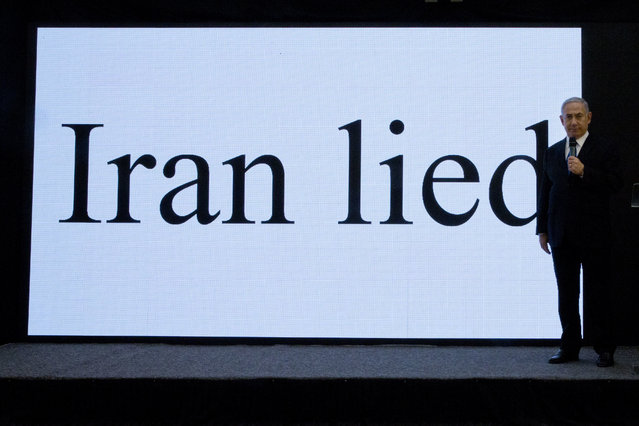 Israeli Prime Minister Benjamin Netanyahu presents material on Iranian nuclear weapons development during a press conference in Tel Aviv, Monday, April 30 2018. Netanyahu says his government has obtained “half a ton” of secret Iranian documents proving the Tehran government once had a nuclear weapons program. Calling it a “great intelligence achievement”, Netanyahu said Monday that the documents show that Iran lied about its nuclear ambitions before signing a 2015 deal with world powers. (Photo by Sebastian Scheiner/AP Photo) 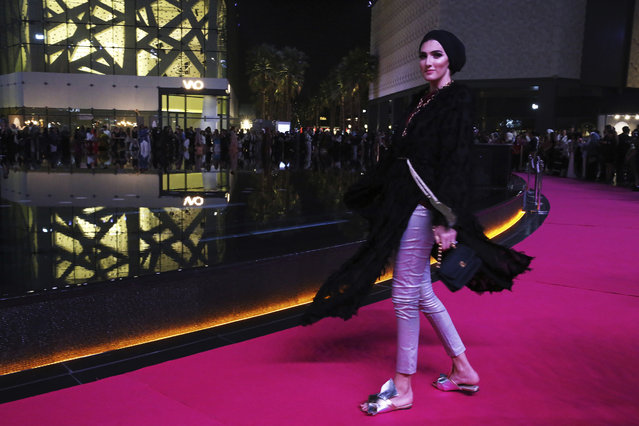 In this Wednesday, March 28, 2018 photograph, a model shows off a modest fashion outfit in Dubai, United Arab Emirates. The Islamic Fashion and Design Council is hosting a six-day fashion show for modest clothing, showing the growing market for the clothes. (Photo by Jon Gambrell/AP Photo) 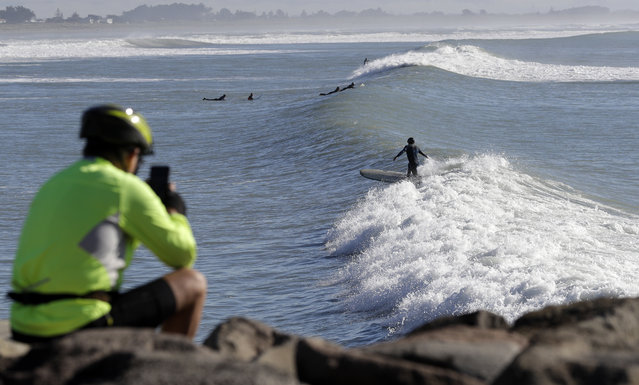 A spectator photographs surfers at Sumner Beach near Christchurch, New Zealand, Tuesday, May 1, 2018. Surfers enjoyed smooth one meter waves at the popular beach on the outskirts of Christchurch. (Photo by Mark Baker/AP Photo) 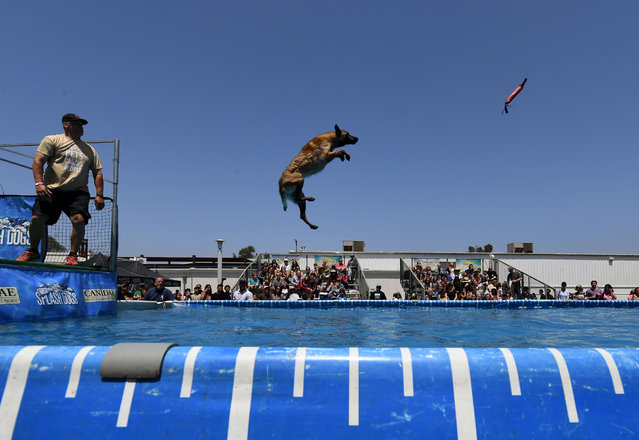 Zuma the dog leaps from the dock as he tries to catch her toy during the Splash Dogs competition heats at America' s Family Pet Expo in Costa Mesa, California, on April 28, 2018. (Photo by Mark Ralston/AFP Photo) 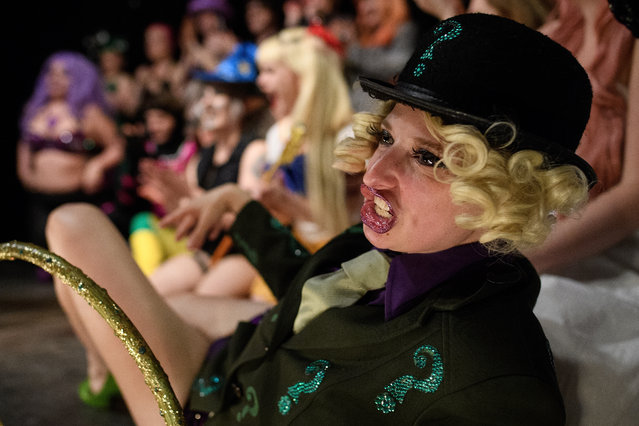 Burlesque dancer Lefty Lucy shouts to the audience during the finale of the opening night of the Nerdlesque Festival on April 27, 2018 in New York City. Dedicated to nerd and pop culture related burlesque, the three day event sees performers from across the world attend shows, classes and talks to promote the nerd burlesque culture. (Photo by Leon Neal/Getty Images) 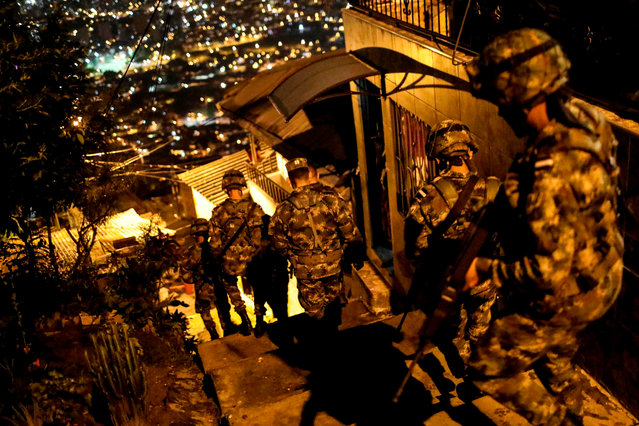 Soldiers patrol the alleys of the Comuna 13 neighbourhood in Medellin, Antioquia Department, Colombia, on April 27, 2018. The Comuna 13 neighbourhood was militarized after gang violence increased following the arrest on April 21 of several gang leaders, including that of Cristian Camilo Mazo Castaneda, aka Sombra, leader of the Robledo gang. (Photo by Joaquin Sarmiento/AFP Photo) 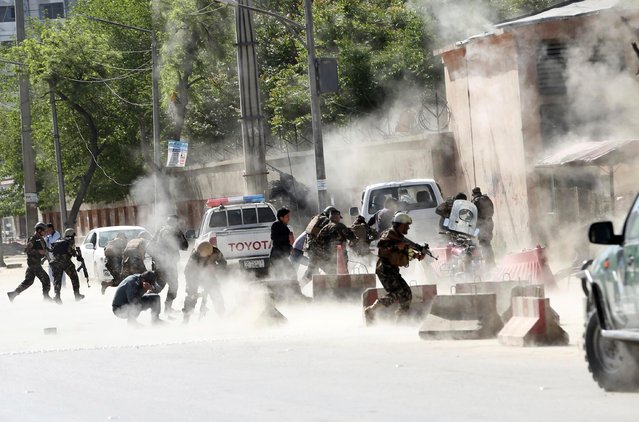 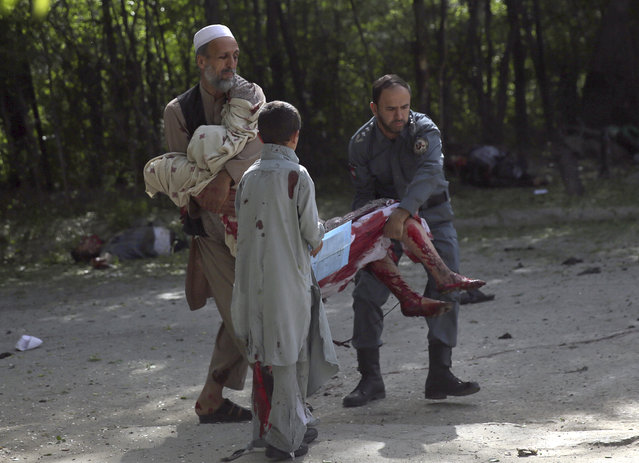 A wounded woman is helped at the site of explosions, in Kabul, Afghanistan, Monday, April 30, 2018. The explosions targeted central Kabul on Monday morning, killing people and wounding a dozen, authorities said, (Photo by Massoud Hossaini/AP Photo) 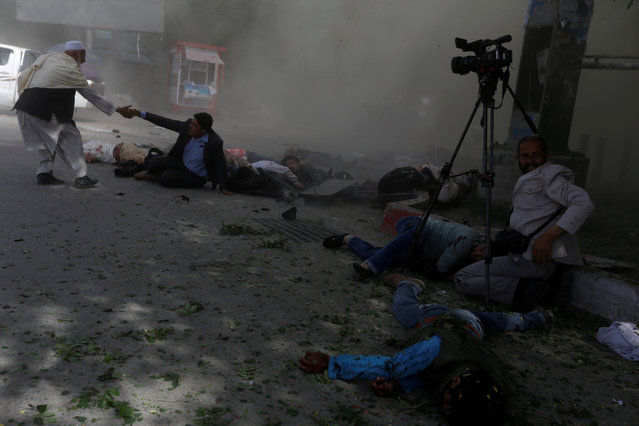 Afghan journalists are seen after a second blast in Kabul, Afghanistan April 30, 2018. (Photo by Omar Sobhani/Reuters) 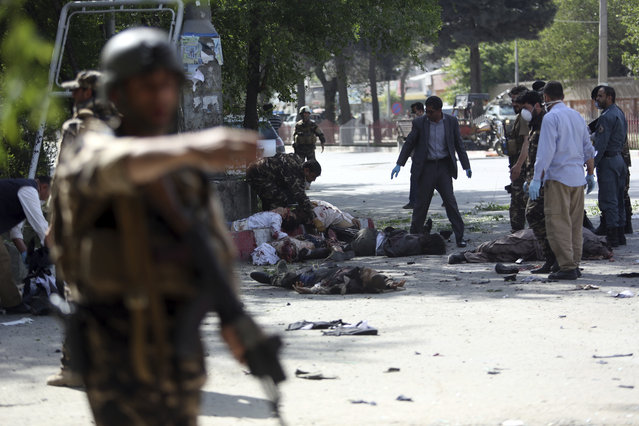 Victims lie on the ground after the explosions in Kabul, Afghanistan, Monday, April 30, 2018. (Photo by Rahmat Gul/AP Photo) 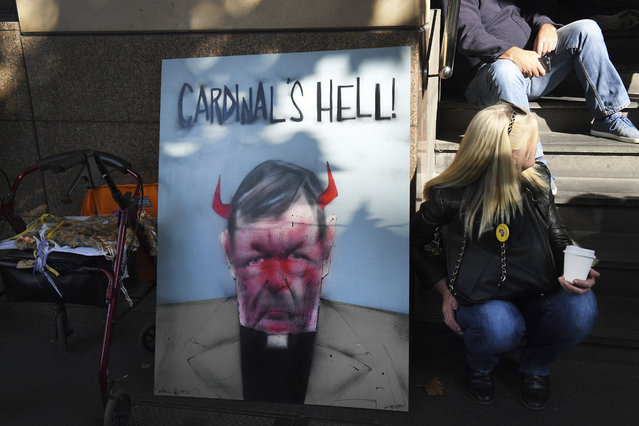 A demonstrator sits beside a placard carrying the image of Australian Cardinal Greorge Pell, outside the Melbourne Magistrate Court in Melbourne Tuesday, May 1, 2018. Australian Cardinal Pell, the most senior Vatican official to be charged in the Catholic Church s*x abuse crisis, must stand trial on charges that he sexually abused multiple victims decades ago, a magistrate ruled Tuesday. (Photo by Andy Brownbill/AP Photo) 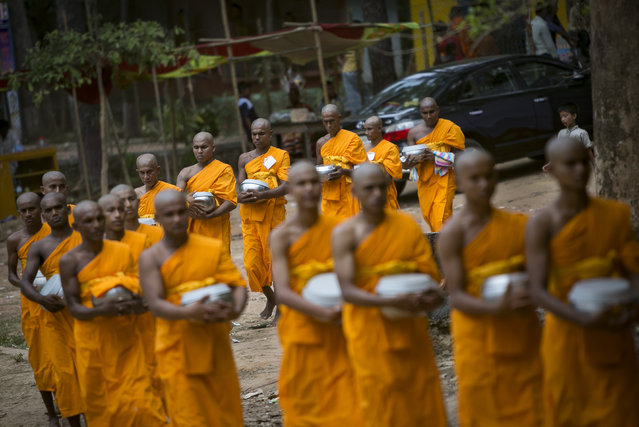 Bangladeshi Buddhists take lunch during the Buddha Purnima on April 29, 2018 in Cox's Bazar, Bangladesh. Buddha Purnima or Vesak marks the birth anniversary of Gautama Buddha, the founder of Buddhism, as followers commemorate the birth of Buddha, his attaining enlightenment and his passing away. (Photo by Allison Joyce/Getty Images) 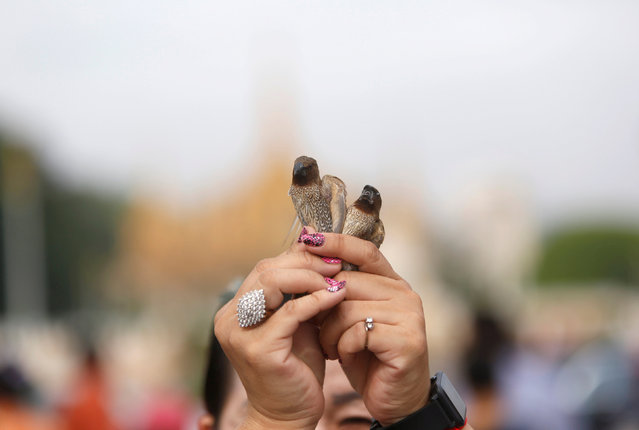 A woman releases birds in front of the Royal Palace during Vesak Bochea Day to honor the birth, enlightenment and death of Buddha in Phnom Penh, Cambodia, April 29, 2018. (Photo by Samrang Pring/Reuters) 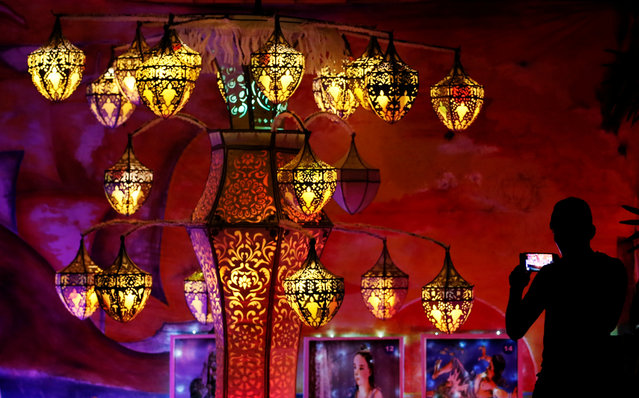 A man takes a picture of a Vesak lantern at the Vesak celebrations zone to commemorate the birth, enlightenment and death of Buddha at a temple, in Colombo, Sri Lanka April 29, 2018. (Photo by Dinuka Liyanawatte/Reuters) 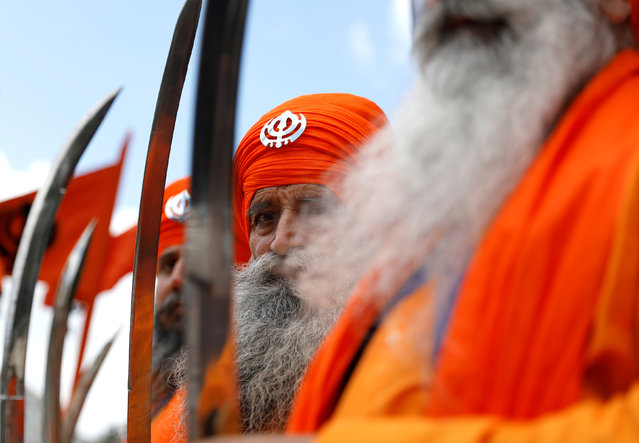 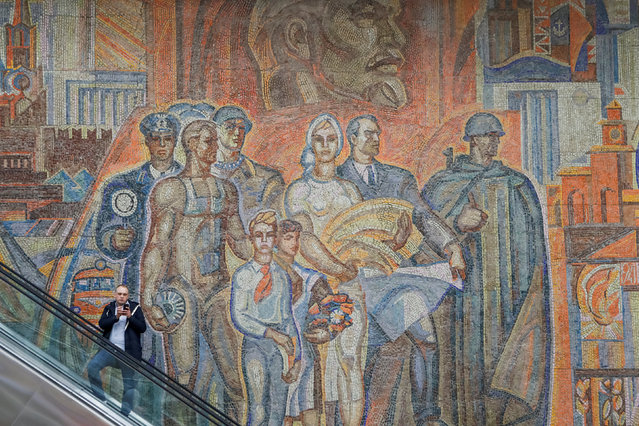 A man uses his phone as he rides an escalator inside a railway station with Soviet era mosaic, in the city of Nizhny Novgorod, Russia April 29, 2018. (Photo by Sergei Karpukhin/Reuters) 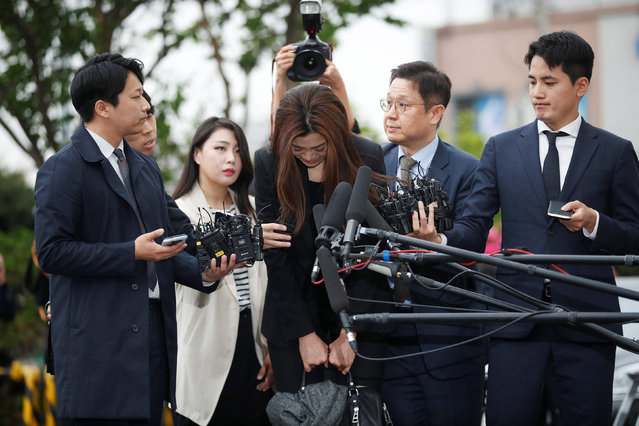 Cho Hyun-min, a former Korean Air senior executive and the younger daughter of the airline's chairman Cho Yang-ho, arrives at a police station in Seoul, South Korea, May 1, 2018. The Korean Air heiress has apologized in her first public appearance as a suspect in an abuse of power case as public calls urging her family to resign grow. (Photo by Kim Hong-Ji/Reuters) 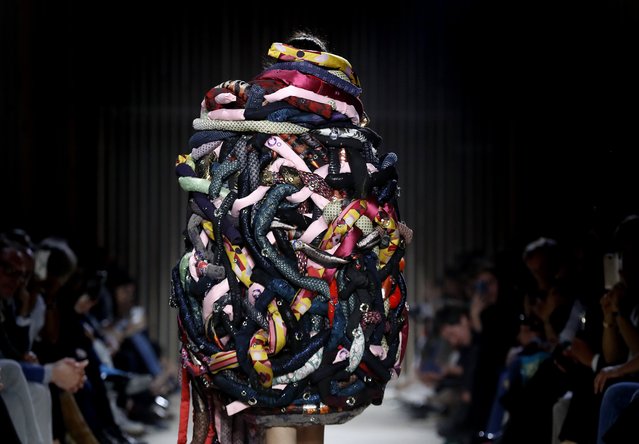 A model presents a creation by Spanish designer Manuela Fidalgo during the 33rd International Festival of Fashion and Photography, in Hyeres, southern France, 29 April 2018. The festival runs from 26 to 30 April. (Photo by Sebastien Nogier/EPA/EFE) 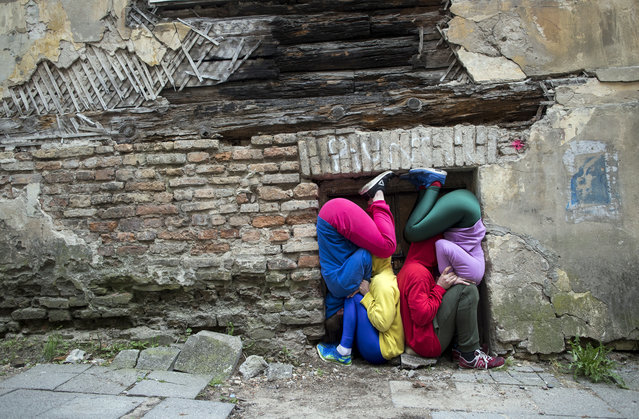 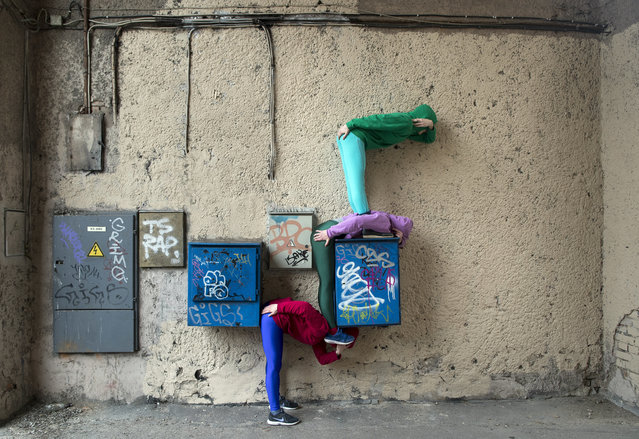 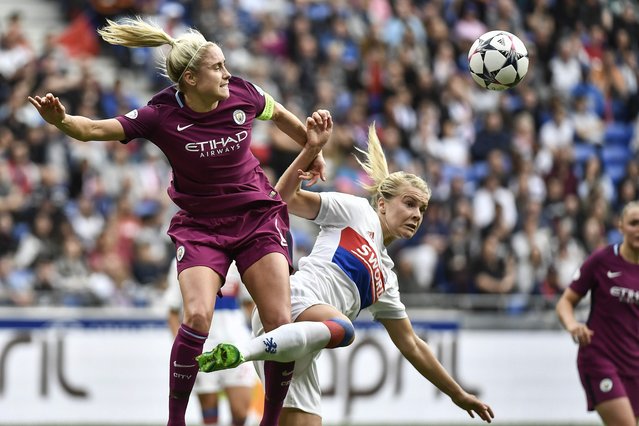 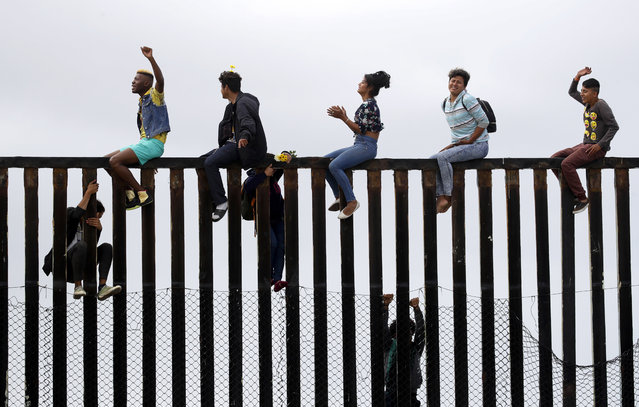 Central American migrants sit on top of the border wall on the beach in San Diego during a gathering of migrants living on both sides of the border, Sunday, April 29, 2018. (Photo by Chris Carlson/AP Photo) 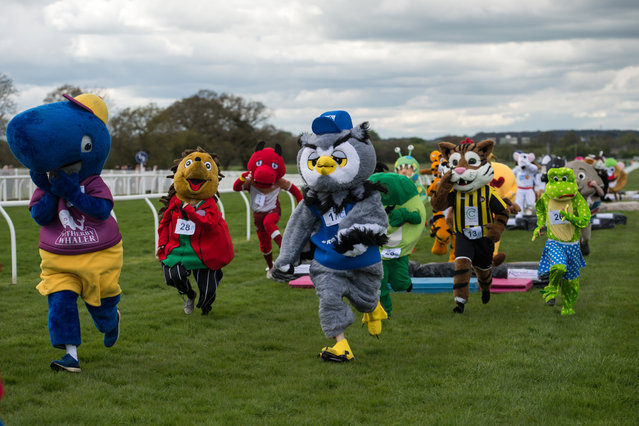 Runners dressed as mascots for various sports clubs, businesses and charities take part in the 13th annual Mascot Gold Cup at Wetherby Racecourse near Wetherby, northern England on April 29, 2018. The race, during which members of the public place bets on the winner, takes place over the racecourse's final furlong (approximately 200 metres) and features five small fences. (Photo by Oli Scarff/AFP Photo) A man and his daughter, members of a migrant caravan from Central America, run between pigeons at the end of their journey through Mexico, prior to preparations for an asylum request in the U.S., in Tijuana, Baja California state, Mexico April 28, 2018. (Photo by Edgard Garrido/Reuters) 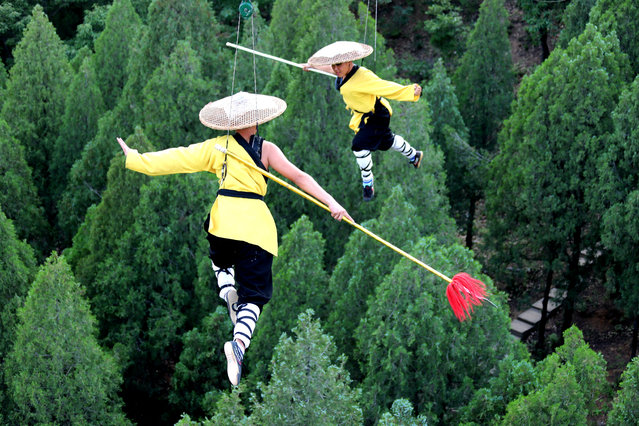