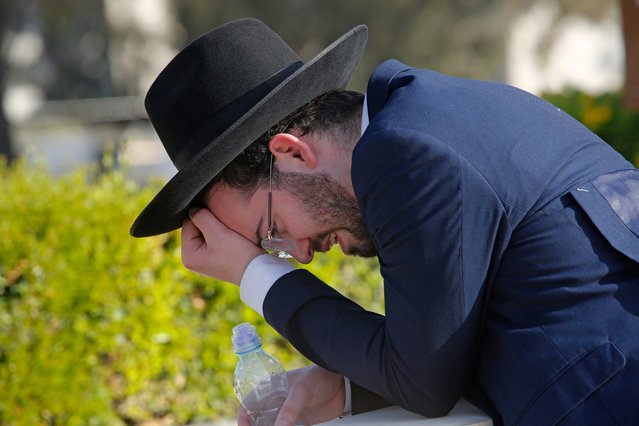 An Ultra-Orthodox Jew mourns at Segula cemetery in Petah Tikva during the funeral of a victim of Jewish pilgrim stampede, on April 30, 2021. A massive stampede at a densely packed Jewish pilgrimage site killed at least 44 people in northern Israel. The tragedy struck after pilgrims thronged to the reputed site of Rabbi Shimon Bar Yochai's tomb at Mount Meron, where mainly ultra-Orthodox Jews mark the Lag BaOmer holiday. (Photo by Gil Cohen-Magen/AFP Photo) 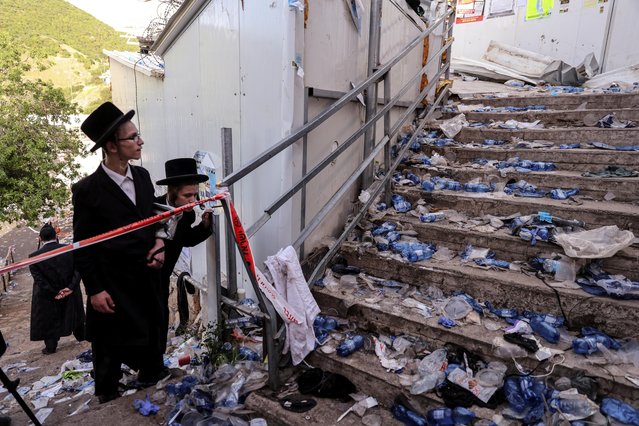 Ultra Orthodox Jews look at stairs with waste on it in Mount Meron, northern Israel, where fatalities were reported among the thousands of ultra-Orthodox Jews gathered at the tomb of a 2nd-century sage for annual commemorations that include all-night prayer and dance, April 30, 2021. A stampede at a religious festival attended by tens of thousands of ultra-Orthodox Jews in northern Israel killed dozens of people and injured more than 100 others early Friday, medical officials said, in one of the country's deadliest civilian disasters. (Photo by Ronen Zvulun/Reuters) 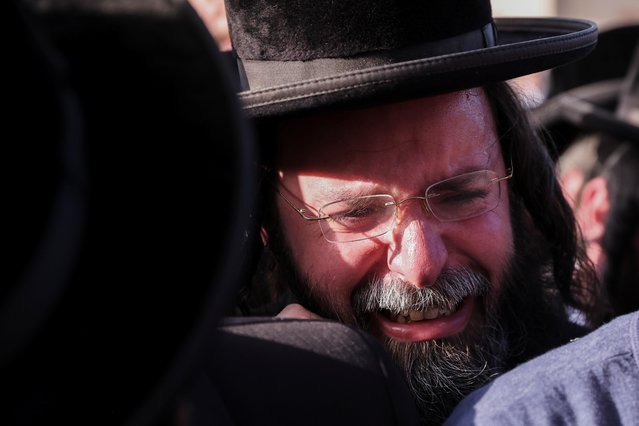 An Ultra-Orthodox Jewish man mourns during the funeral of Yehuda Leib Robin, who died during Lag B'Omer commemorations on Mount Meron, in Jerusalem April 30, 2021. (Photo by Ronen Zvulun/Reuters) 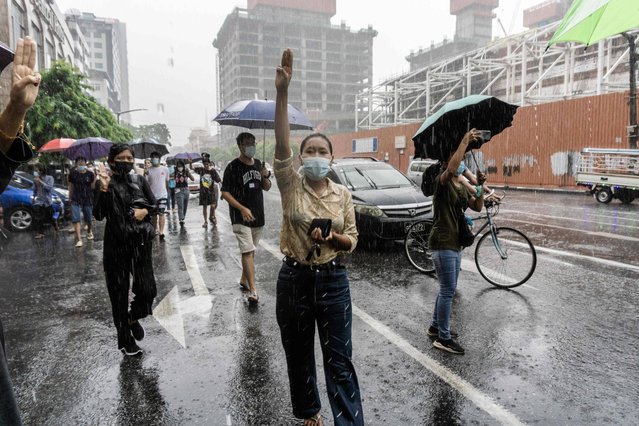 Protesters hold up the three finger salute as they march in the rain during a demonstration against the military coup in Yangon on April 30, 2021. (Photo by AFP Photo/Stringer) 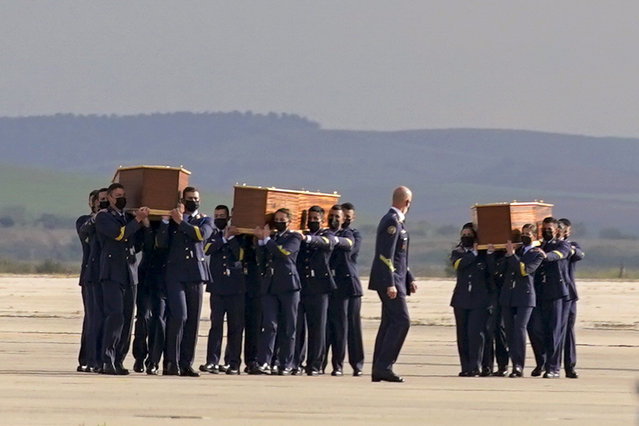 Coffins carrying the bodies of Spanish reporters David Beriain, Roberto Fraile and the director of the Chengeta Wildlife Foundation Rory Young, arrive from Burkina Faso at the Madrid military airport on Friday, April 30, 2021. Two Spanish journalists and the Irish director of a wildlife foundation were killed Monday in an ambush in eastern Burkina Faso. The two journalists were working with the wildlife campaigner on a documentary about poachers in a national park bordering Benin when they were attacked by gunmen. (Photo by Andrea Comas/AP Photo) 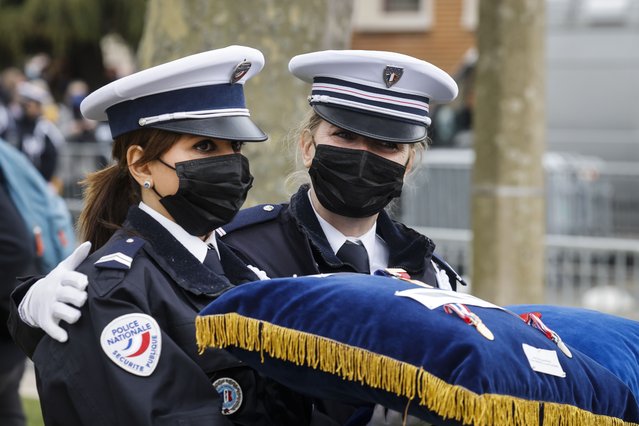 French police officers react during a remembrance gathering to pay respect to police official Stephanie Monferme, killed a week ago, in Rambouillet, southwest of Paris, Friday, April 30, 2021. France is holding a national ceremony Friday to pay tribute to a police official who was stabbed to death inside her police station in what authorities say was an Islamic extremist attack. (Photo by Ludovic Marin/Pool Photo via AP Photo) 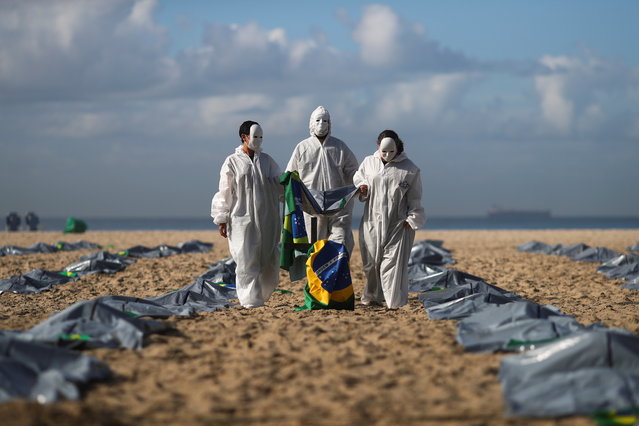 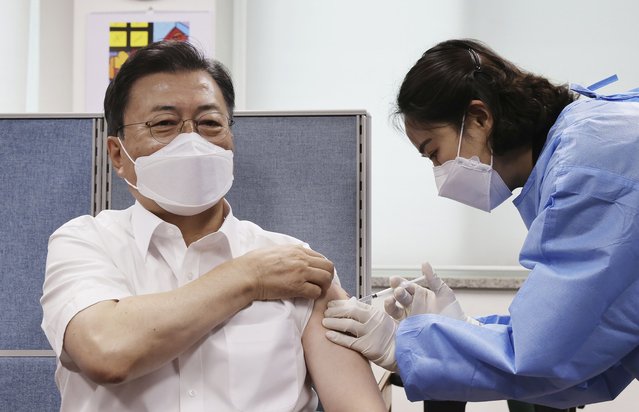 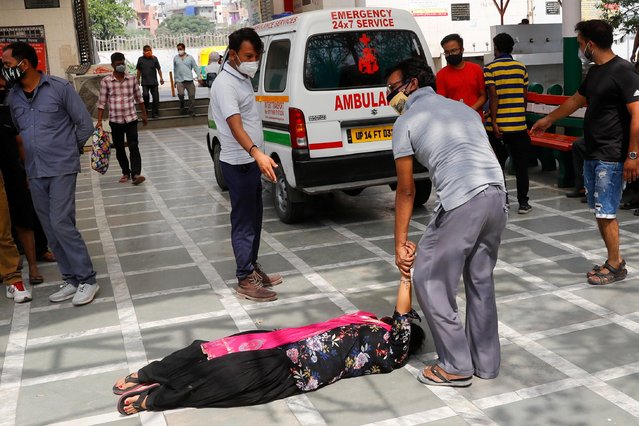 A man tries to lift a woman that fainted after seeing the body of a relative who died from the coronavirus disease (COVID-19), at a crematorium in New Delhi, India, April 30, 2021. (Photo by Adnan Abidi/Reuters) 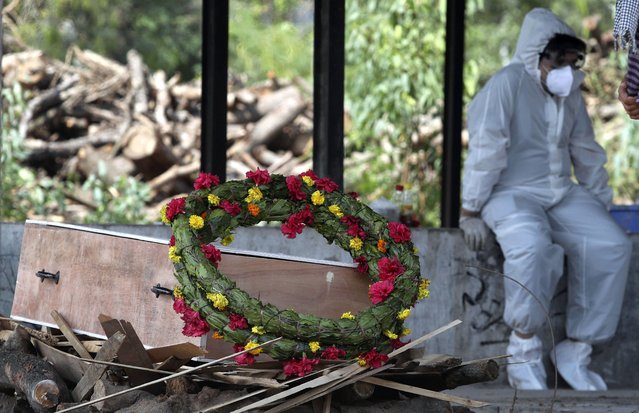 A wreath lies on the coffin of a COVID-19 victim before his cremation in Jammu, India, Friday, April 30, 2021. Indian scientists appealed to Prime Minister Narendra Modi to publicly release virus data that would allow them to save lives as coronavirus cases climbed again Friday, prompting the army to open its hospitals in a desperate bid to control a massive humanitarian crisis. (Photo by Channi Anand/AP Photo) 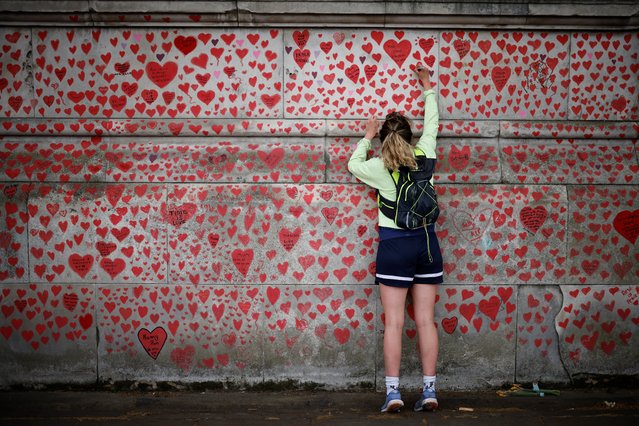 A woman draws on the National Covid Memorial Wall on the embankment on the south side of the River Thames in London on April 30, 2021 in memory of those who lost their lives to Covid-19. (Photo by Tolga Akmen/AFP Photo) 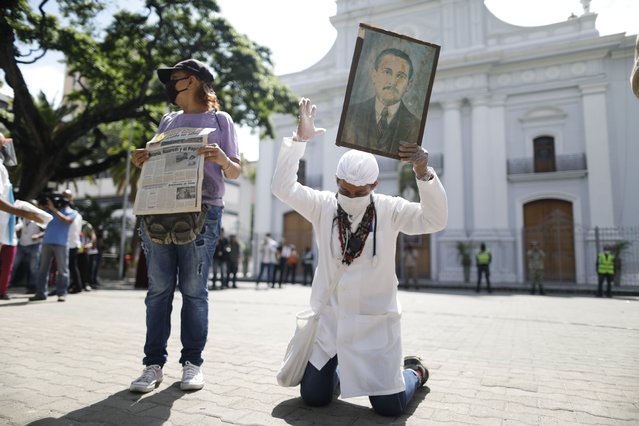 Yeni Vasquez raises a portrait of the late, Venezuelan Dr. Jose Gregorio Hernandez outside the church in La Candelaria after the church bell rang, signaling the start of his Beatification ceremony in Caracas, Venezuela, Friday, April 30, 2021. Known as the “doctor of the poor”, Hernandez is being Beatified by the Catholic church, a step towards sainthood. (Photo by Ariana Cubillos/AP Photo) 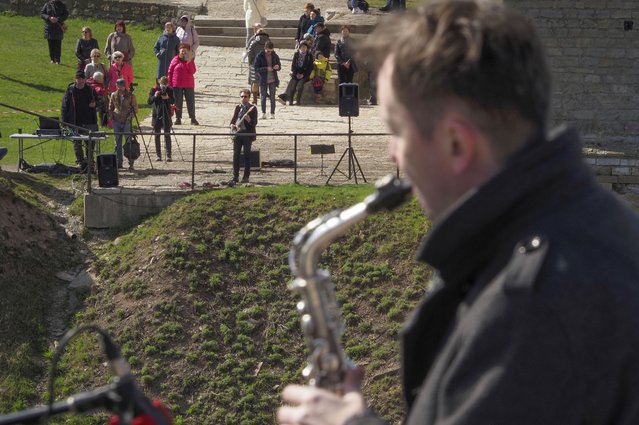 Estonian guitarist Jaak Sooaar, background center, performs in the Narva Castle in Narva as Russian saxophonist Alexey Kruglov, right, performs in the Ivangorod Fortress on the Russian-Estonian border in Ivangorod, 130 km (80 miles) west of St.Petersburg, Russia, Friday, April 30, 2021. Musicians on the Estonian-Russian border held an unusual concert on Friday, with Estonian guitarist Jaak Sooaar and Russian saxophonist Alexey Kruglov performing from the castles on the opposing banks of the Narva river that marks the border between the two countries. The concert was held on the International Jazz Day by the two musicians as an act of friendship despite the deteriorating relations between the two countries and as cross-border contacts have been limited due to the corona-virus pandemic. (Photo by Dmitri Lovetsky/AP Photo) 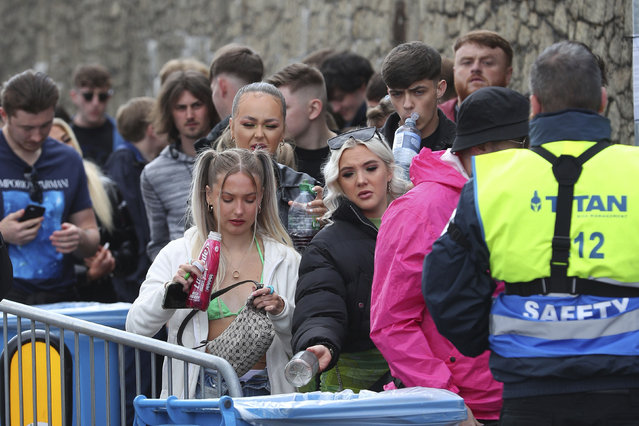 People arrive at Circus nightclub in Liverpool, England, Friday April 30, 2021, for a COVID-19 safety pilot event. Researchers at the event will gather evidence for the national Events Research programme (ERP) which will see 6,000 clubbers across two nights take over Bramley Moore Dock warehouse in an event which requires no social distancing or face coverings. (Photo by Peter Byrne/PA Wire via AP Photo) 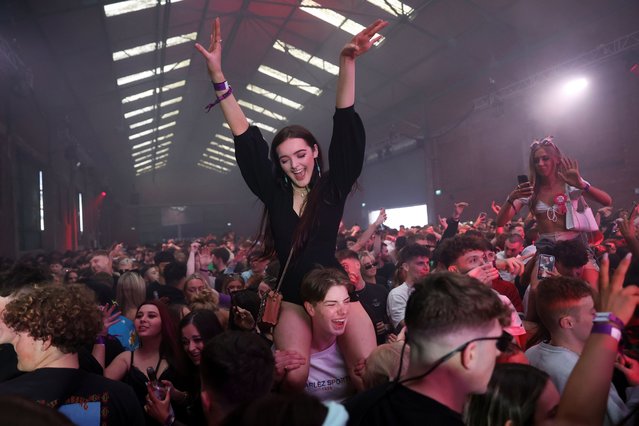 People enjoy their time at a nightclub, as part of a national research programme assessing the risk of the coronavirus disease (COVID-19) transmission, in Liverpool, Britain on April 30, 2021. (Photo by Carl Recine/Reuters) 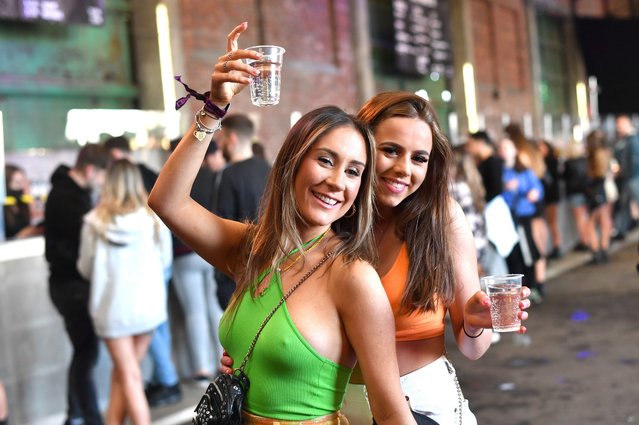 Two women react to the camera as Nightclub Circus hosts the first dance event, which will welcome 6,000 clubbers to the city's Bramley-Moore Dock warehouse on April 30, 2021 in Liverpool, England. The event is part of the national Events Research Programme which will provide data on how events could be permitted to safely reopen. (Photo by Anthony Devlin/Getty Images) 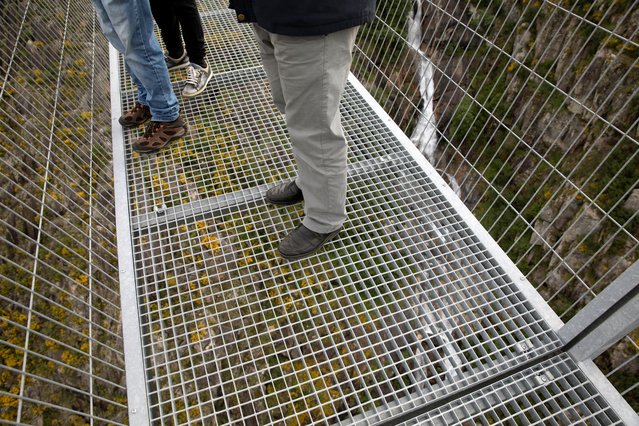 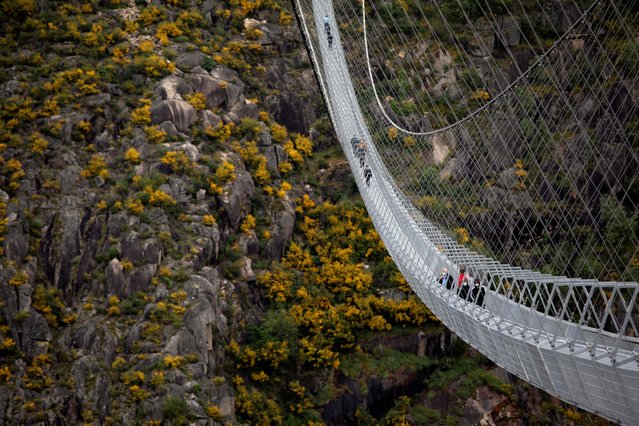 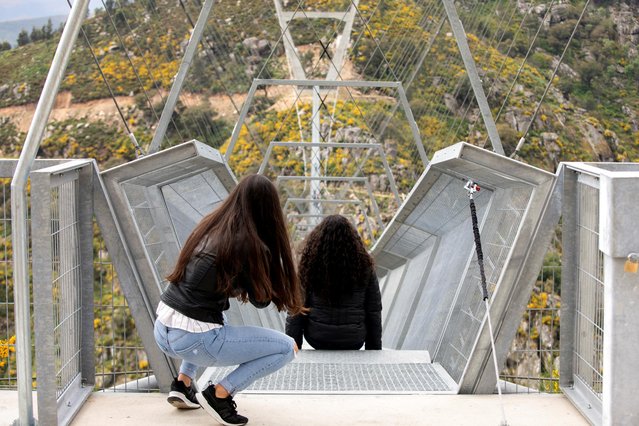