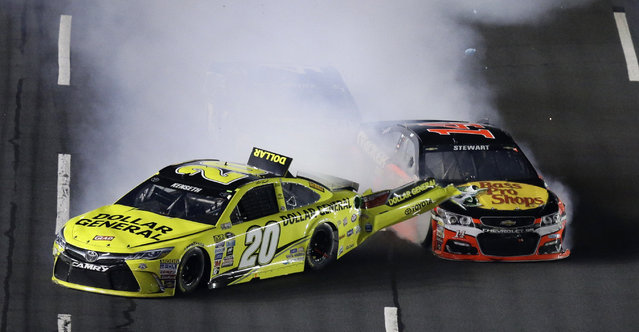 Matt Kenseth (20) is hit from behind by Tony Stewart during the NASCAR Sprint All-Star auto race at Charlotte Motor Speedway in Concord, N.C., Saturday, May 21, 2016. (Photo by Gerry Broome/AP Photo) 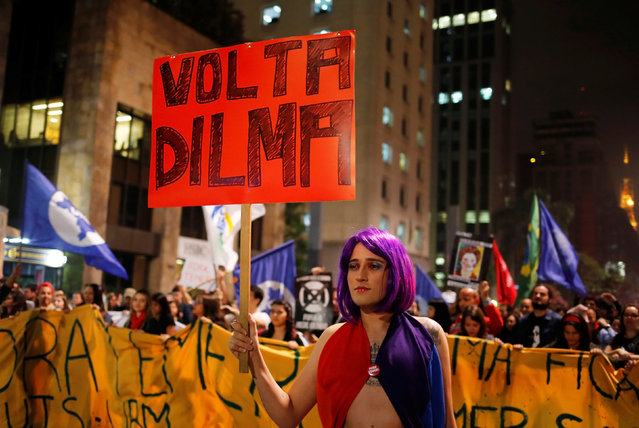 A man holds a sign during a protest against Brazil's interim President Michel Temer and in support of suspended President Dilma Rousseff at Paulista Avenue in Sao Paulo, Brazil, May 20, 2016. The sign reads, “Dilma returns”. (Photo by Nacho Doce/Reuters) 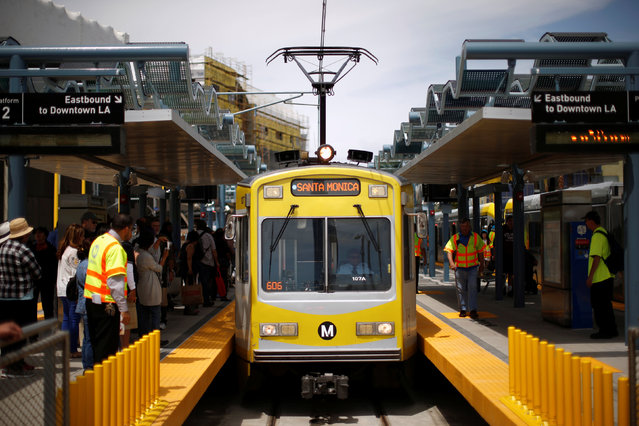 A train is seen on L.A. Metro's new $1.5 billion Expo Line extension that connects downtown to the beach for the first time in 63 years, in Santa Monica, California, U.S., May 20, 2016. (Photo by Lucy Nicholson/Reuters) 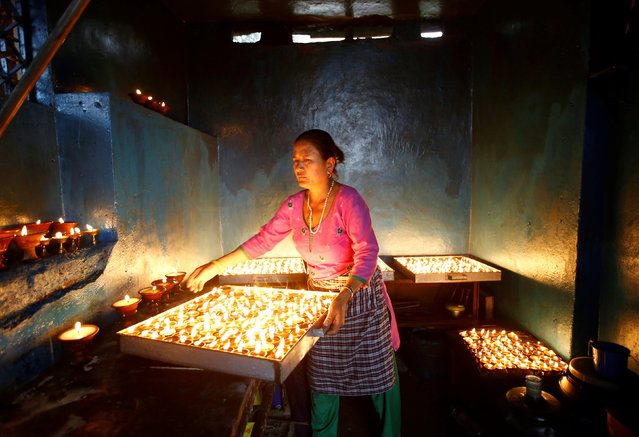 A woman carries a tray filled with butter lamps during celebrations on the birth anniversary of Buddha, also known as Vesak Day, in Kathmandu, Nepal, May 21, 2016. (Photo by Navesh Chitrakar/Reuters) 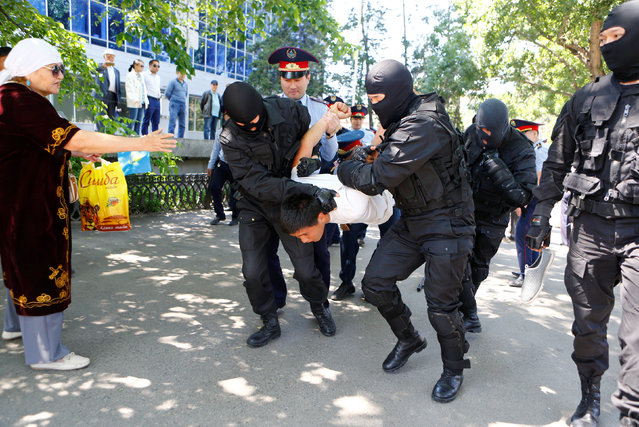 Riot police officers detain a demonstrator during a protest against President Nursultan Nazarbayev's government and an unpopular land reform it has proposed, in Almaty, Kazakhstan, May 21, 2016. (Photo by Shamil Zhumatov/Reuters) 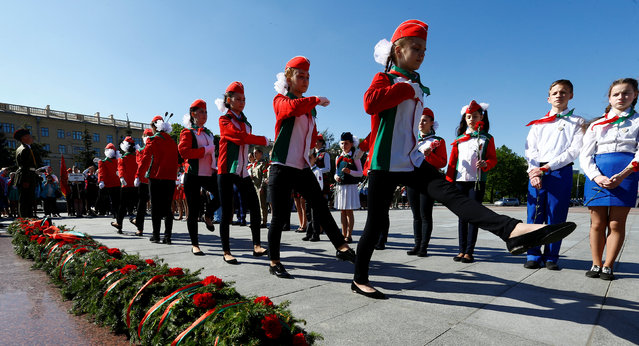 Belarusian schoolchildren, who are members of a pro-government Young Pioneer movement, take part in a meeting of the republican teams at the Victory square in Minsk, Belarus May 21, 2016. (Photo by Vasily Fedosenko/Reuters) 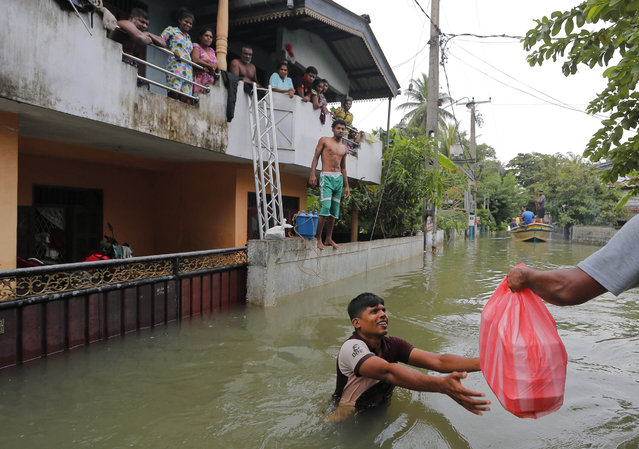 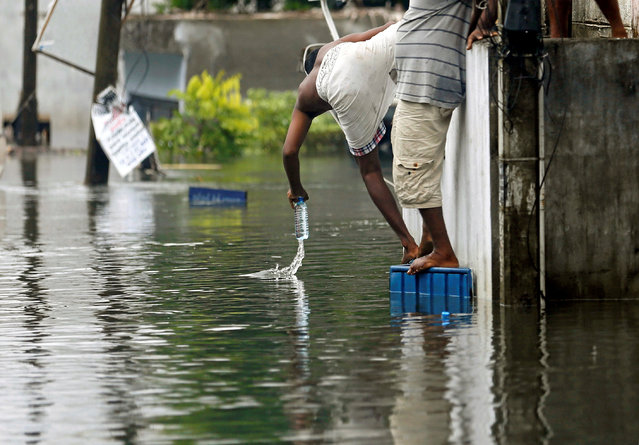 A man bends down to grab a water bottle after he failed catch it on a flooded road in Wellampitiya , Sri Lanka May 21, 2016. (Photo by Dinuka Liyanawatte/Reuters) 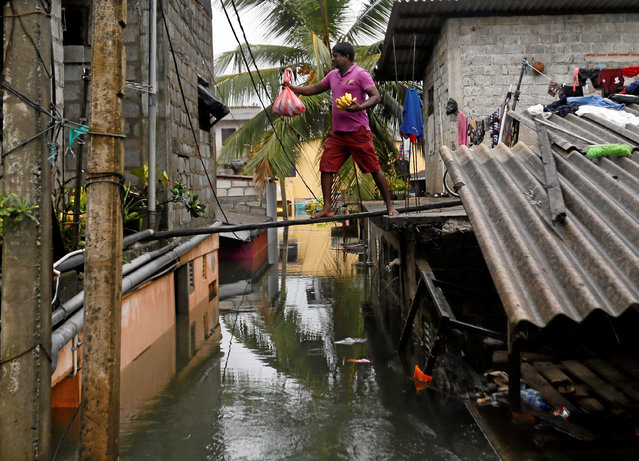 A man walks on a wooden plank to hand food over to his neighbours on a flooded road in Wellampitiya, Sri Lanka May 21, 2016. (Photo by Dinuka Liyanawatte/Reuters) 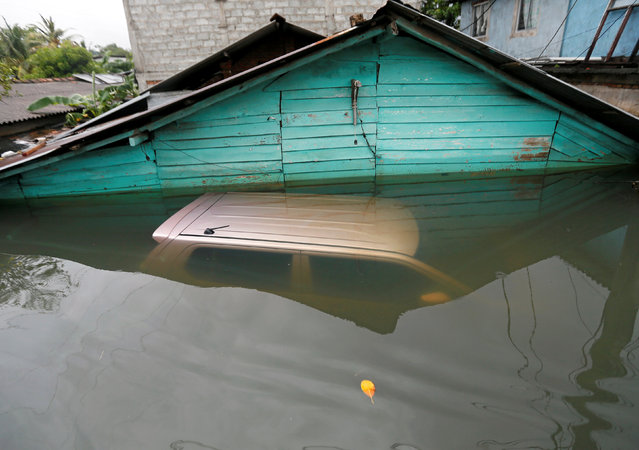 A car is seen under water on a flooded road in Wellampitiya , Sri Lanka May 21, 2016. (Photo by Dinuka Liyanawatte/Reuters) 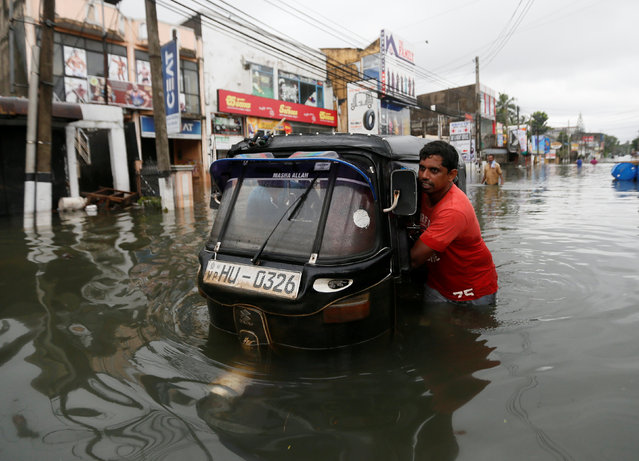 A man pushes his trishaw through a flooded road in Wellampitiya, Sri Lanka May 21, 2016. (Photo by Dinuka Liyanawatte/Reuters) 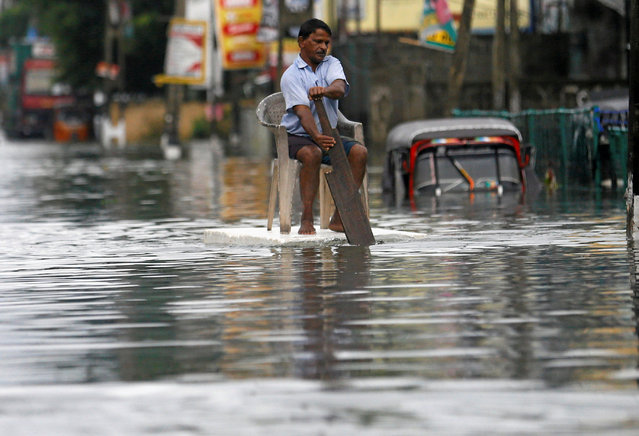 A man sits on a chair as he uses a piece of styrofoam to move through a flooded road in Wellampitiya, Sri Lanka May 21, 2016. (Photo by Dinuka Liyanawatte/Reuters) 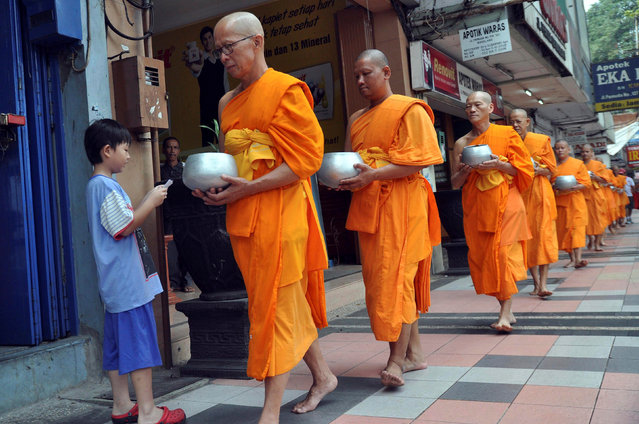 Buddhist monks collect alms ahead of Vesak Day in Magelang, Central Java, Indonesia, May 21, 2016 in this photo taken by Antara Foto. (Photo by Anis Efizudin/Reuters/Antara Foto) 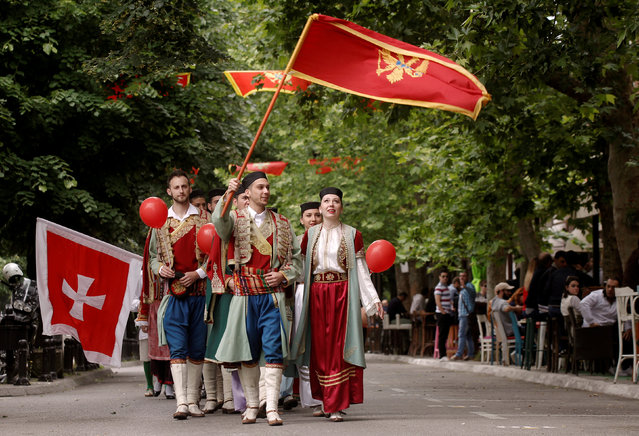 Montenegrins dressed in national costumes wave flags as part of the celebrations for the country's 10th anniversary of its Independence Day in Podgorica, Montenegro, May 21, 2016. (Photo by Stevo Vasiljevic/Reuters) 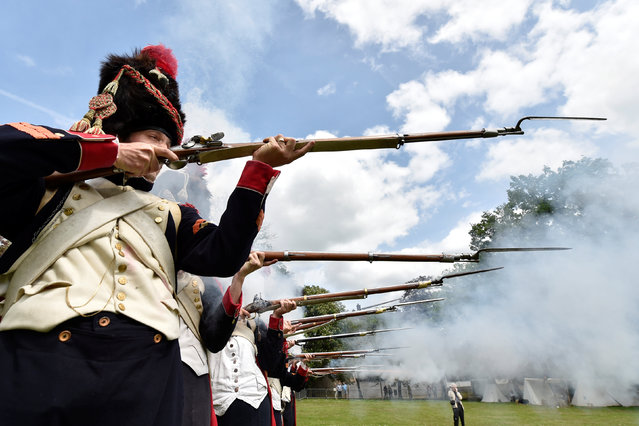 Performers take part in a re-enactment during festivities in Kelmis, Belgium, May 21, 2016. (Photo by Eric Vidal/Reuters) 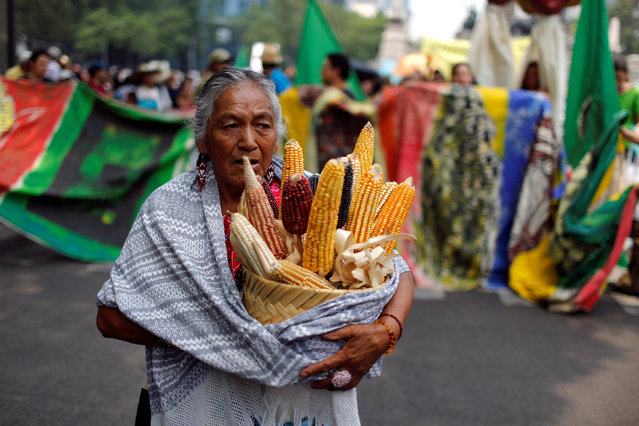 A demonstrator carries a basket with corn cobs during a protest march against Monsanto Co, the world's largest seed company, in Mexico City, Mexico, May 21, 2016. (Photo by Tomas Bravo/Reuters) 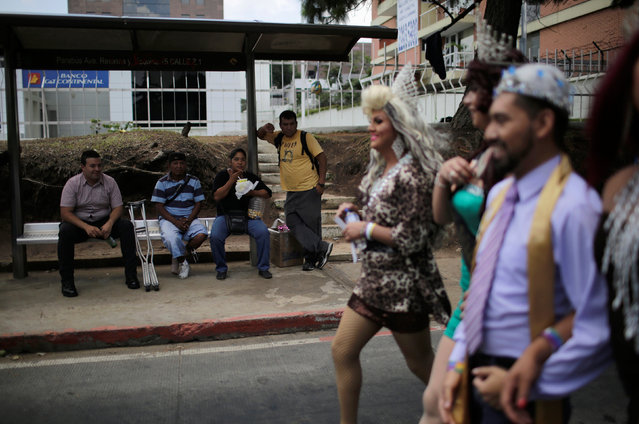 People look at members of the LGBT community during a march against homophobia in downtown Guatemala City, Guatemala, May 21, 2016. (Photo by Saul Martinez/Reuters) 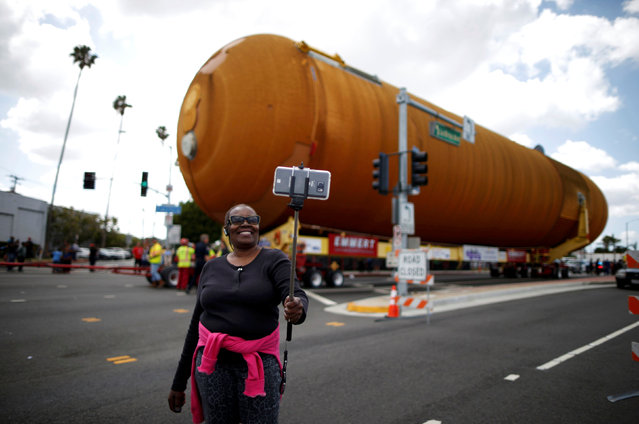 Eddye Chapman takes a picture of herself as the space shuttle Endeavour's external fuel tank ET-94 makes its way to the California Science Center in Exposition Park in Los Angeles, California, U.S. May 21, 2016. (Photo by Lucy Nicholson/Reuters) 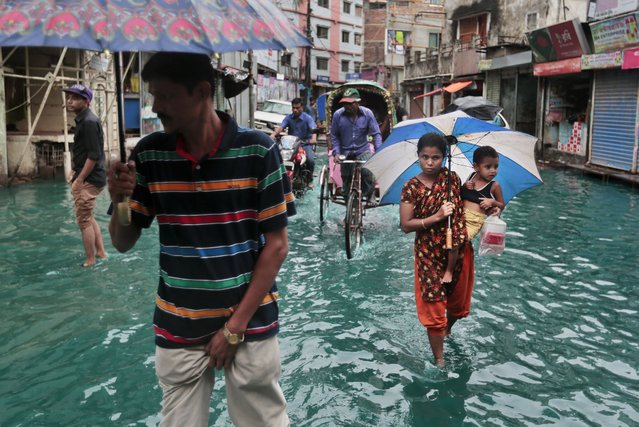 Bangladeshi people walk through a waterlogged street after heavy rainfall in Dhaka, Bangladesh, Saturday, May 21, 2016. A cyclone unleashed heavy rain and strong winds on Bangladesh's southern coastal region on Saturday, killing at least 11 people and forcing hundreds of thousands from their homes. Mixing of rain water and toxic waste from industries has turned water into green. (Photo by A.M. Ahad/AP Photo) 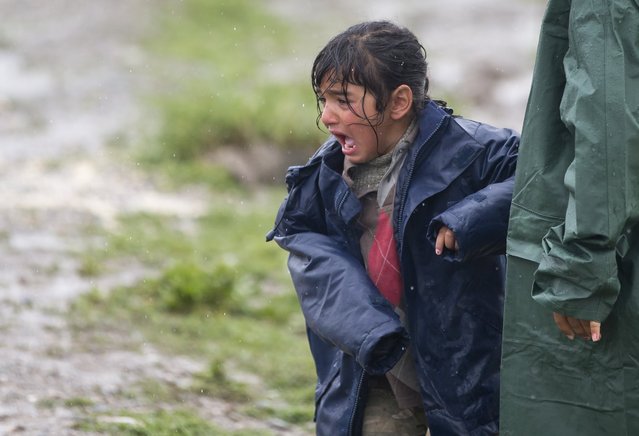 A child cries at the migrant camp in Idomeni, Greece, Saturday, May 21, 2016. Thousands of stranded refugees and migrants have camped in Idomeni for months after the border was closed. (Photo by Darko Bandic/AP Photo) 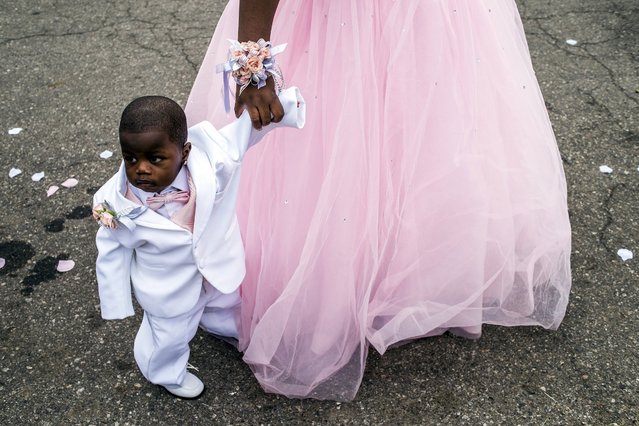 Beecher senior Quataizha Nelson, 18, walks along with her 1-year-old nephew Chevonte Driver as hundreds line the street to catch a glimpse of prom fashion that about 70 students wear to the Beecher 2016 prom on Friday, May 20, 2016 during a red carpet drop-off at Dailey Elementary School in Beecher, Mich. (Photo by Jake May/The Flint Journal-MLive.com via AP Photo) 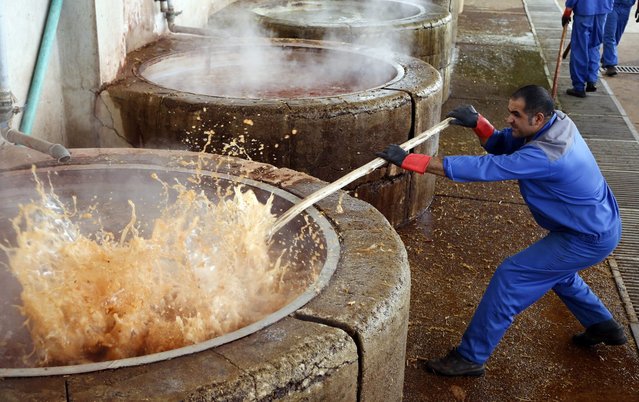 An Iranian worker control the hot water used in dyeing carpet threads at the Zolnavari carpet factory in the city of Shiraz, south western Iran, 21 May 2016. Media reported that Iranian carpet industry seeks revival with lifting the sanctions. Iran's famed carpet weavers are busy at work following the country's historic nuclear deal with world powers, anticipating a boost in exports as sanctions are set to be lifted. Iranian officials expected the Iranian economy to grow on an average of eight percent over the coming five years following the lifting of sanctions against Iran. (Photo by Abedin Taherkenareh/EPA) 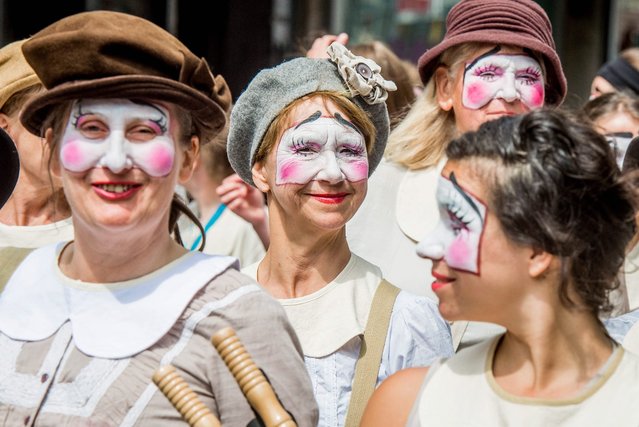 Participants are costumed during the Zinneke Parade in Brussels, Belgium, 21 May 2016. Thousands of people took part in the urban parade event that invites residents from the different neighbourhoods of Brussels to participate in this social and artistic project that runs every two years. (Photo by Stephanie Lecocq/EPA) 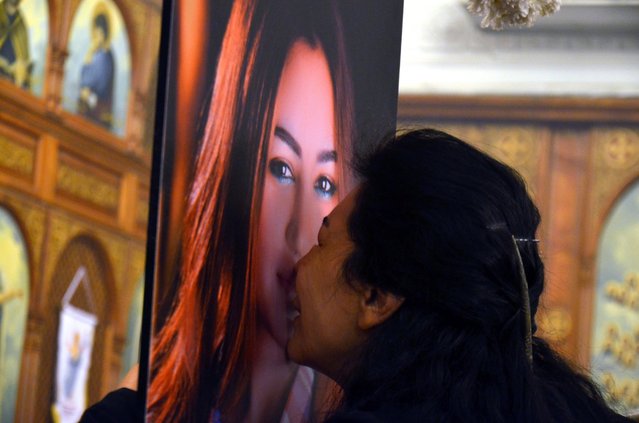 Mother of the late Yara Hani Faraq Tawfiq, an Egyptian cabin crew member who was on board EgyptAir's MS804 flight that went missing at sea, kiss her portrait and cry during her funeral service, Cairo, Egypt, 21 May 2016. The Armed Forces of Egypt announced that the debris of an EgyptAir Airbus A320, which had disappeared early on 19 May 2016, as well as personal belongings of the passengers are floating in the Mediterranean Sea, north of the Egyptian city of Alexandria. The EgyptAir passenger jet had left Paris bound for Cairo with 66 people on board, but crashed into the Mediterranean Sea for unknown reasons. (Photo by Ayman Aref/EPA) 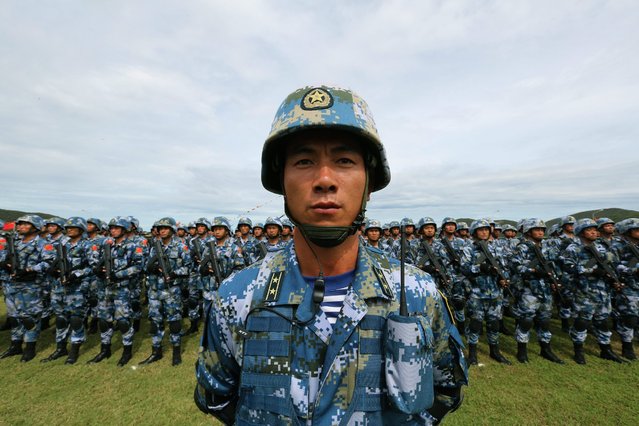 Chinese Marine Corps line up during the opening ceremony of the Blue Strike 2016 joint military exercise at a military base in Chonburi province, Thailand, 21 May 2016. Thailand and China hold joint “Blue Strike” military exercises, naval exercises focused on humanitarian relief including maritime transport, positioning training, onshore joint exercises and overall retreat. More than 700 personnel from Thailand and China are taking part in the drills, which will be held in Thailand until 09 June 2016. (Photo by Narong Sangnak/EPA) 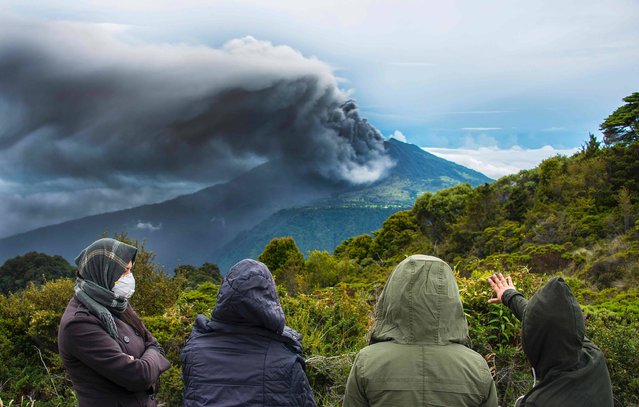 People look at the Turrialba volcano as it spewes ashes on May 20, 2016, in Cartago, Costa Rica. The Turrialba volcano started erupting columns of smoke and ash that the wind extended towards the Costa Rican capital, in what according to experts is the strongest eruption in the past six years. (Photo by Ezequiel Becerra/AFP Photo) 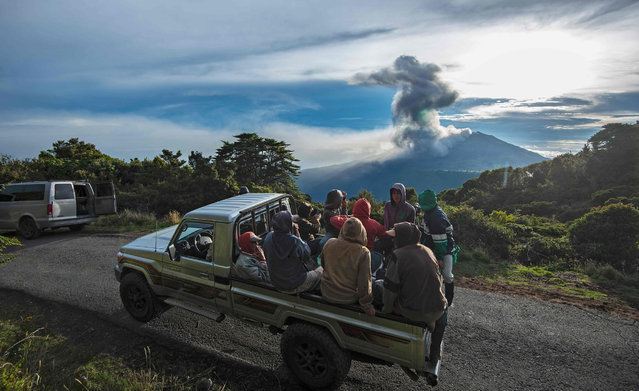 Farmers are transported on the back of a truck as the Turrialba volcano erupts in the background on May 20, 2016, in Cartago, Costa Rica. (Photo by Ezequiel Becerra/AFP Photo) 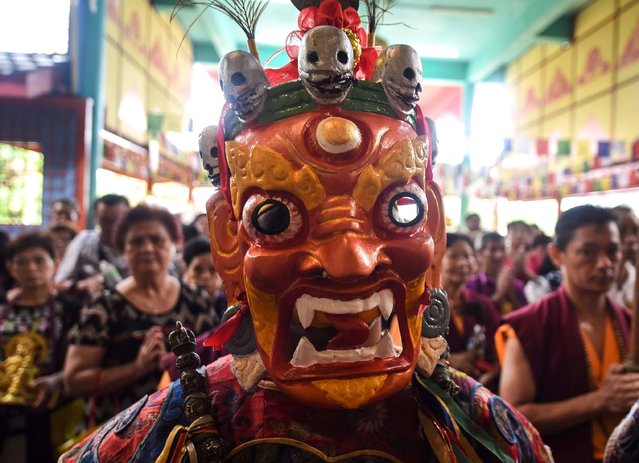 A Buddhist priest wearing traditional costume performs rituals along with other devotees during Wesak day or Buddha Day festival celebrations at the Enlightened Heart Tibetan Buddhist temple in Ipoh on May 21, 2016. Wesak or Vesak festival is the most important Buddhist festival of the year as it commemorates the birth, enlightenment (nirvana), and death (Parinirvana) of Gautama Buddha. (Photo by Manan Vatsyayana/AFP Photo) 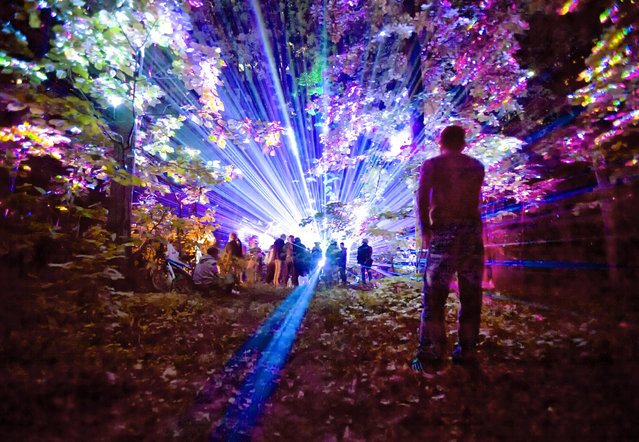 A man watches from a distance as youngsters dance during a music and laser show, in a forest outside Bucharest, Romania, early Saturday, May 21, 2016. People attended in large numbers a display of laser lighting and music that lasted until the morning hours. (Photo by Vadim Ghirda/AP Photo)
Edit Del
22 May 2016 07:31:00, post received 0 comments
Publication archive:
←   →
Popular tags:
All tags
Last searches: