A girl prepares before performing a dance in front of Spain's Queen Letizia at the Center of the Sisters of Saint Vincent de Paul in Cite Soleil, Port-au-Prince, Haiti, May 23, 2018. (Photo by Andres Martinez Casares/Reuters) 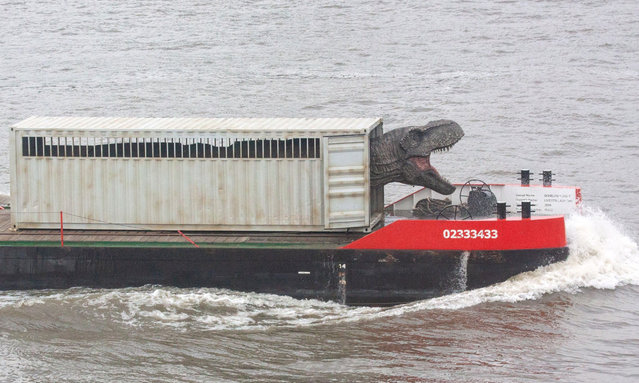 A T-Rex is seen on the River Thames as it is delivered to the Jurassic World: Fallen Kingdom event in London, UK on May 23, 2018. (Photo by David Taylor/Rex Features/Shutterstock) 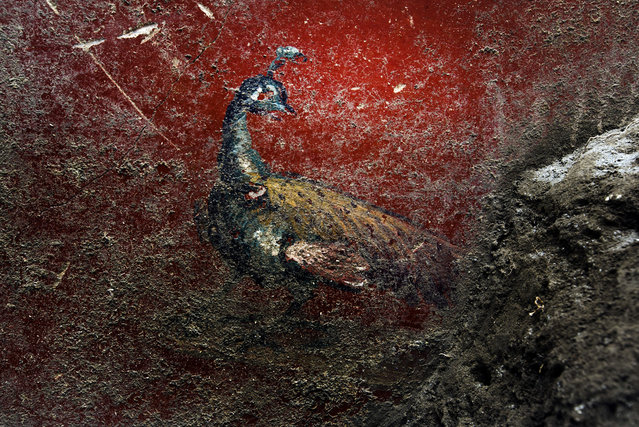 A newly excavated peacock mural at the Roman archaeological site in Pompeii, Italy on May 21, 2018. (Photo by Fotogramma/IPA/Rex Features/Shutterstock) 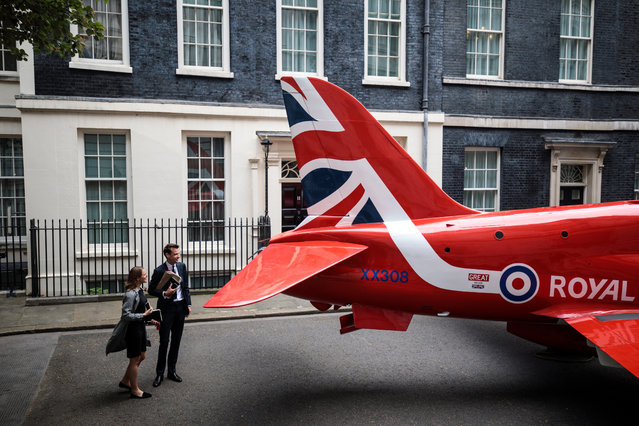 A Royal Air Force Red Arrow jet sits outside Number 10 Downing Street to mark RAF 100 celebrations on May 23, 2018 in London, England. British Prime Minister Theresa May is to hold a reception at Number 10 later today to mark the RAF centenary. (Photo by Jack Taylor/Getty Images) 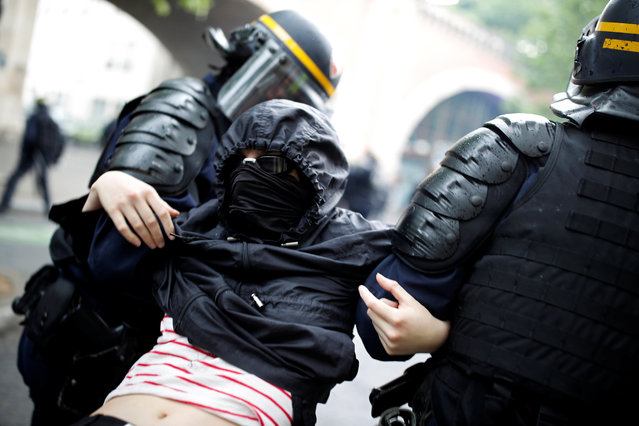 French riot police apprehend a masked and hooded protester after clashes at a demonstration during a national day of strikes by public sector workers, in Paris, France on May 22, 2018. (Photo by Christian Hartmann/Reuters) 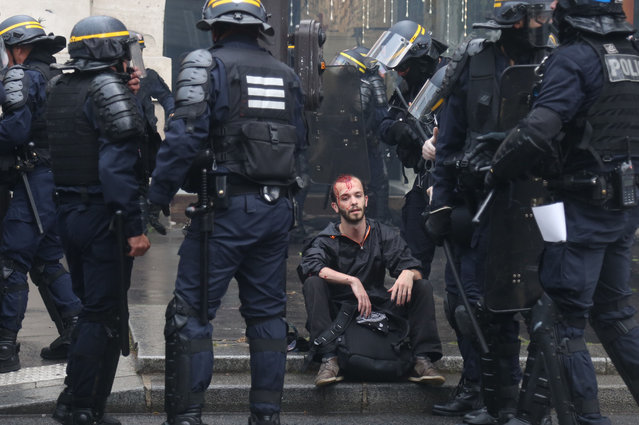 A wounded demonstrator is surrounded by riot police officers, on May 22, 2018 in Paris, during a nationwide day protest by French public sector employees and public servants against the overhauls proposed by French President, calling them an “attack” by the centrist leader against civil services as well as their economic security. (Photo by Zakaria Abdelkafi/AFP Photo) A lava fountain is observed from a helicopter flight over the Fissure 22 in Kilauea Volcano's Lower East Rift Zone during ongoing eruptions of the Kilauea Volcano, May 21, 2018. (Photo by USGS via Reuyers) 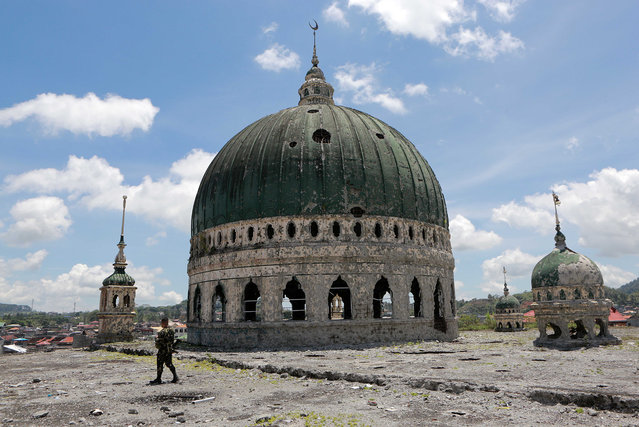 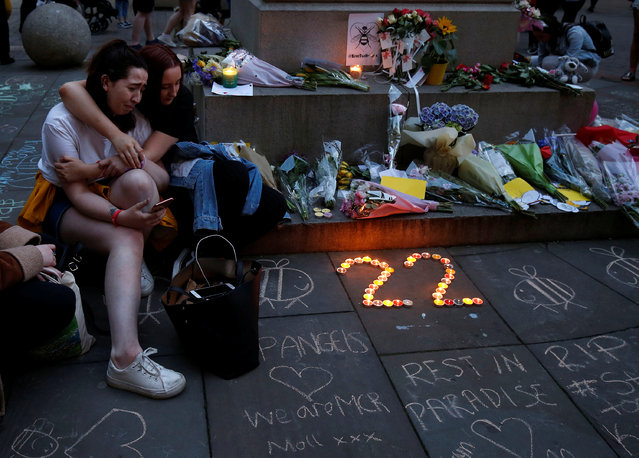 Girls sit by a memorial during the first anniversary of the Manchester Arena bombing, in Manchesterr, England on May 22, 2018. The suicide bomb attack took place following a concert at Manchester Arena by US singer Ariana Grande and claimed the lives of 22 people. (Photo by Andrew Yates/Reuters) 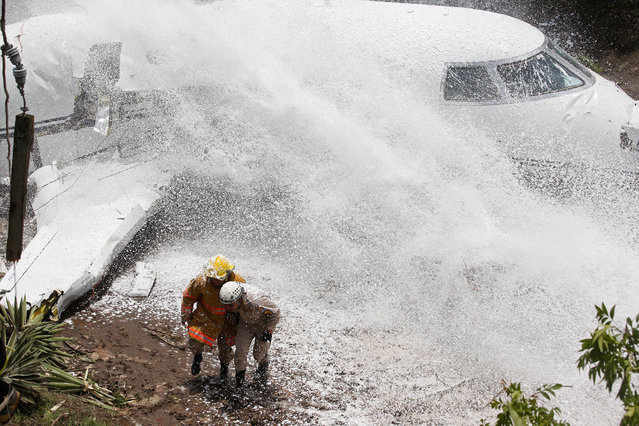 Firefighters take cover from firefighting foam applied onto the wreckage of a Gulfstream G200 aircraft that skidded off the runway during landing at Toncontin International Airport in Tegucigalpa, Honduras on May 22, 2018. (Photo by Jorge Cabrera/Reuters) 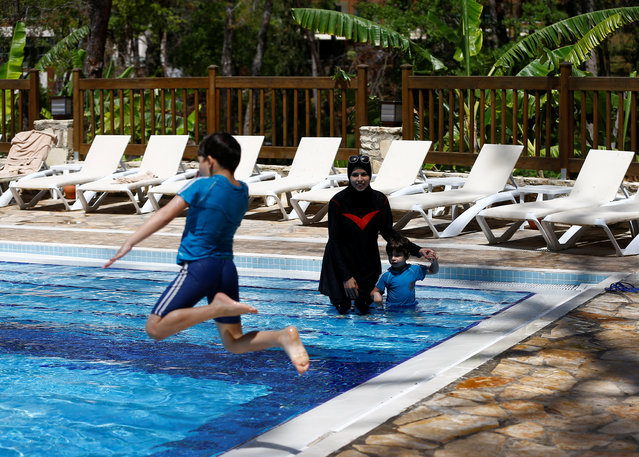 Guests enjoy the pool at Wome Deluxe Hotel in Alanya, Turkey on May 23, 2018. Only 60 or so hotels and resorts offer halal-friendly breaks, out of many thousands of hotels across Turkey, but a report in November said Turkey has jumped four places to the third most popular destination for Islamic holidays, behind the United Arab Emirates and Malaysia. (Photo by Osman Orsal/Reuters) 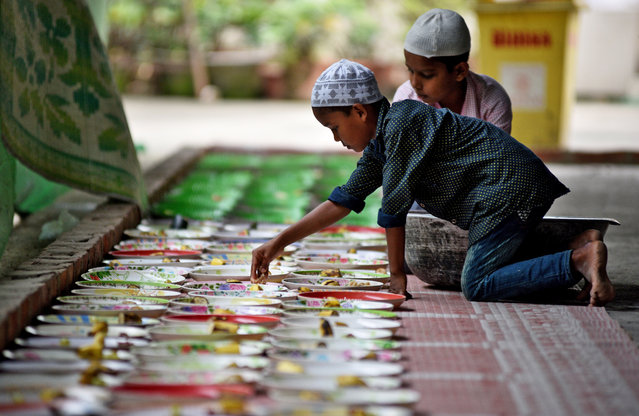 Muslim children arrange Iftar (breaking fast) meals inside a mosque during the holy fasting month of Ramadan, in Guwahati, India May 23, 2018. (Photo by Anuwar Hazarika/Reuters) 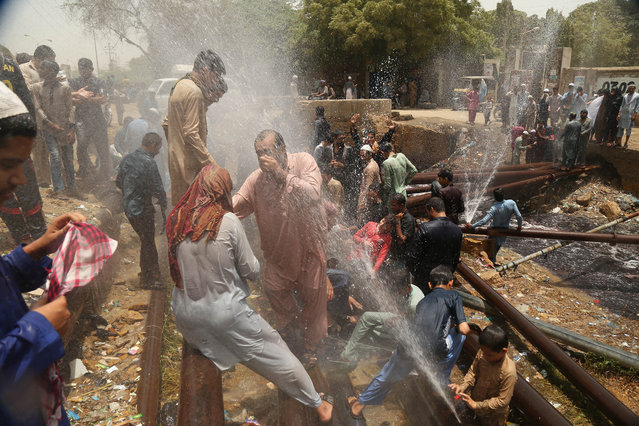 People cool off around punctured water supply lines as heatwave continue in Karachi, Pakistan, 22 May 2018. According to reports at least 65 people have been killed due to heatwave as temperatures reached up to 44 degrees Celsius. (Photo by Rehan Khan/EPA/EFE) 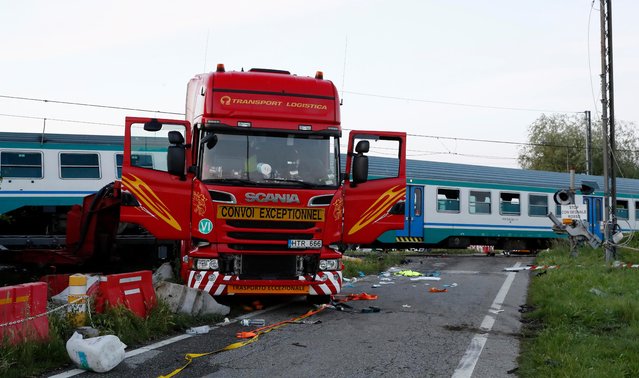 The wreckage of a truck sits next to a railroad crossing where it was hit my a regional train in Caluso, outside Turin, Italy, early Thursday, May 24, 2018. At least two were killed and over a dozen injured in the crash. (Photo by Antonio Calanni/AP Photo) 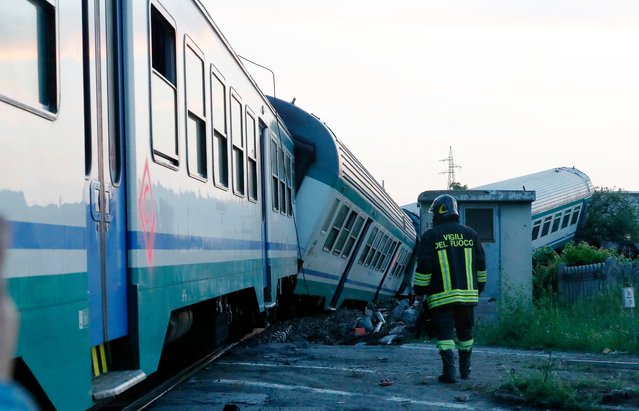 A fireman walks beside the twisted wreckage of a train that plowed into a big-rig truck in Caluso, outside Turin, Italy, early Thursday, May 24, 2018. (Photo by Antonio Calanni/AP Photo) 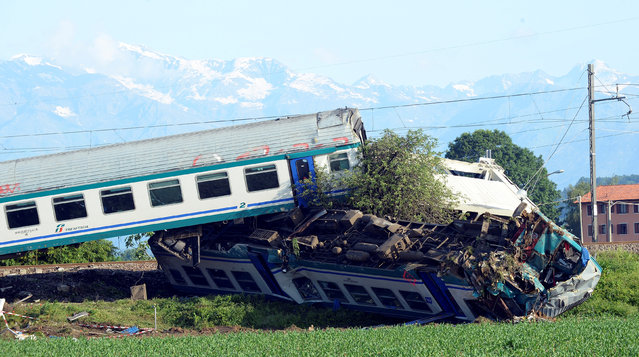 The twisted wreckage of a train that plowed into a truck last night is seen in Caluso, near Turin, Italy, May 24, 2018. (Photo by Massimo Pinca/Reuters) 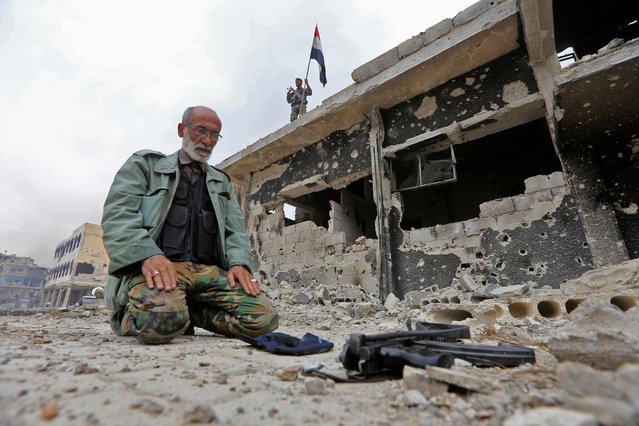 A member of the Syrian pro-government forces prays in a destroyed street in the Hajar al-Aswad neighbourhood on the southern outskirts of the capital Damascus on May 22, 2018. The government seized earlier in the week the Yarmuk Palestinian camp and adjacent neighbourhoods of Tadamun and Hajar al-Aswad from the Islamic State (IS) group , putting Damascus fully under its control for the first time since 2012. (Photo by Louai Beshara/AFP Photo) 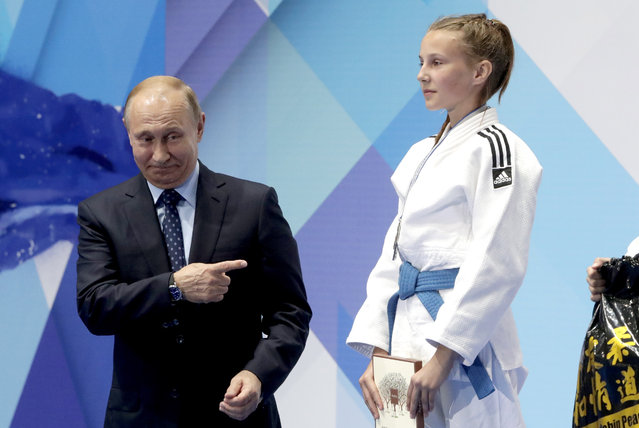 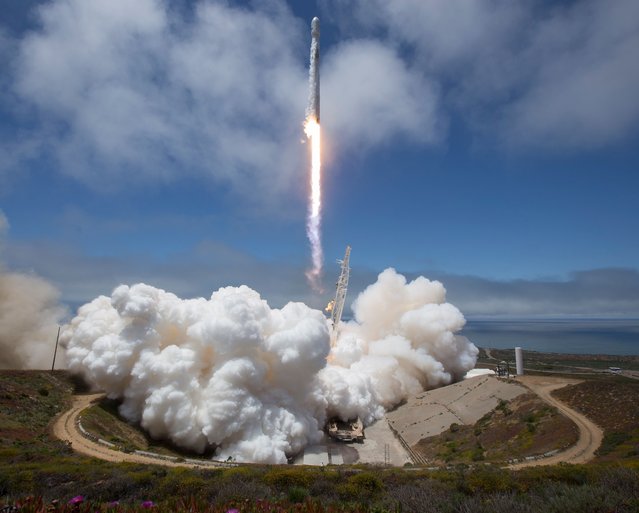 The NASA/German Research Centre for Geosciences GRACE Follow-On spacecraft launch onboard a SpaceX Falcon 9 rocket, Tuesday, May 22, 2018, from Space Launch Complex 4E at Vandenberg Air Force Base in California. The mission will measure changes in how mass is redistributed within and among Earth's atmosphere, oceans, land and ice sheets, as well as within Earth itself. GRACE-FO is sharing its ride to orbit with five Iridium NEXT communications satellites as part of a commercial rideshare agreement. (Photo by Bill Ingalls/AFP Photo/NASA) 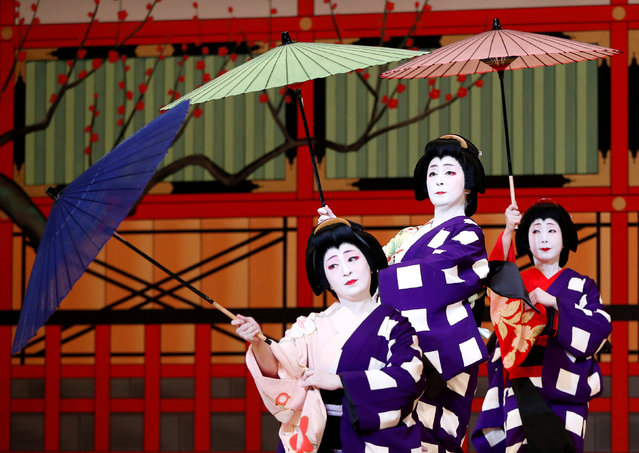