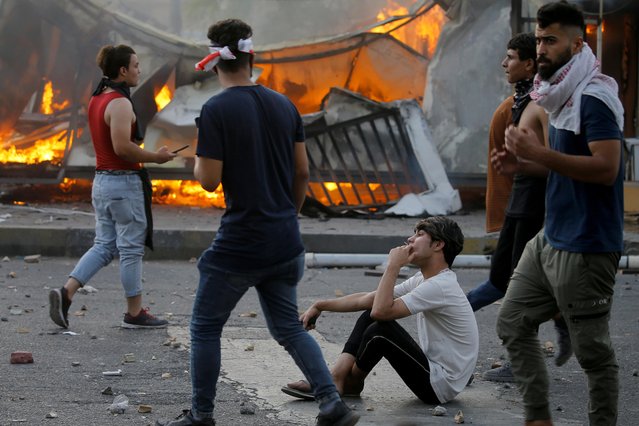 A demonstrator smokes a cigarette near a fire site during an anti-government protest in Baghdad, Iraq on May 25, 2021. Hundreds demonstrated in Tahrir Square, shouting slogans against Iran-backed militias and accusing Prime Minister Mustafa al-Kadhimi's government of failing to answer for the deaths of dozens of activists shot dead in different parts of Iraq in recent months. (Photo by Thaier Al-Sudani/Reuters) 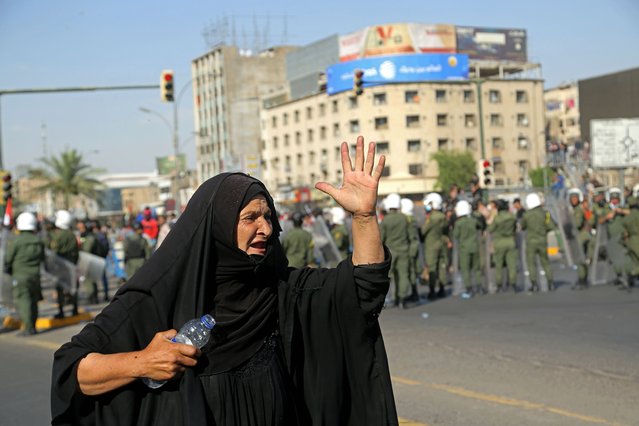 A woman chants slogans while security forces try to disperse the anti-government protesters, in Tahrir Square, Baghdad, Iraq, Tuesday, May 25, 2021. Hundreds of Iraqis took to the streets in Baghdad on Tuesday to protest what they say is impunity by those behind a rising number of targeted killings of prominent activists and journalists. (Photo by Hadi Mizban/AP Photo) 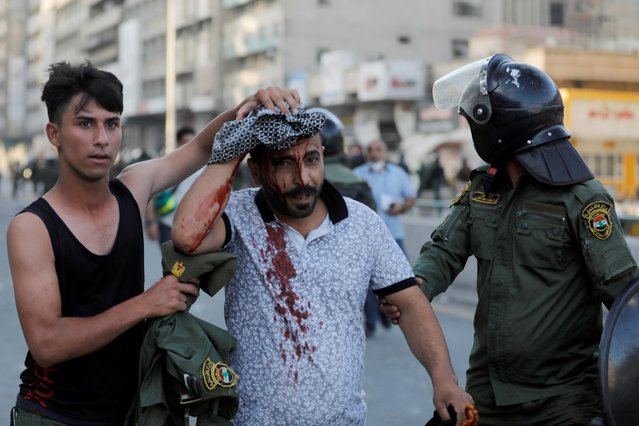 Members of Iraqi security forces escort an injured demonstrator during an anti-government protest in Baghdad, Iraq on May 25, 2021. (Photo by Khalid al-Mousily/Reuters) 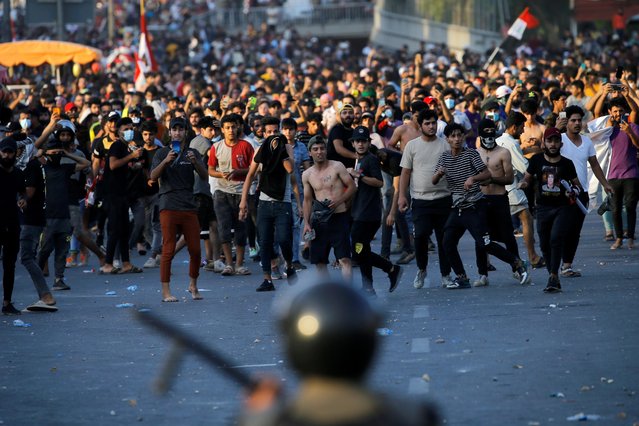 Demonstrators face security forces during an anti-government protest in Baghdad, Iraq on May 25, 2021. (Photo by Thaier Al-Sudani/Reuters) 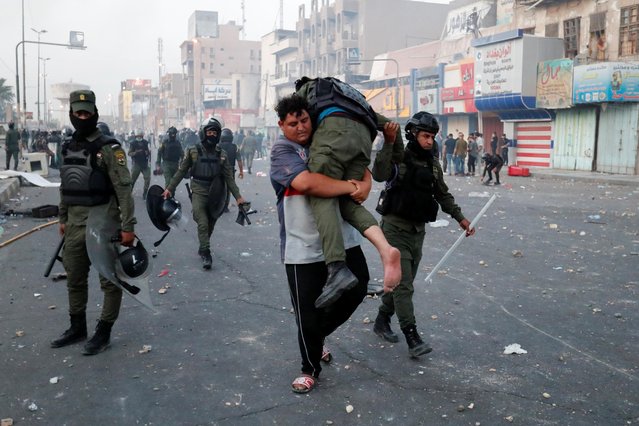 A man carries an injured member of Iraqi security forces during an anti-government protest in Baghdad, Iraq on May 25, 2021. (Photo by Thaier Al-Sudani/Reuters) 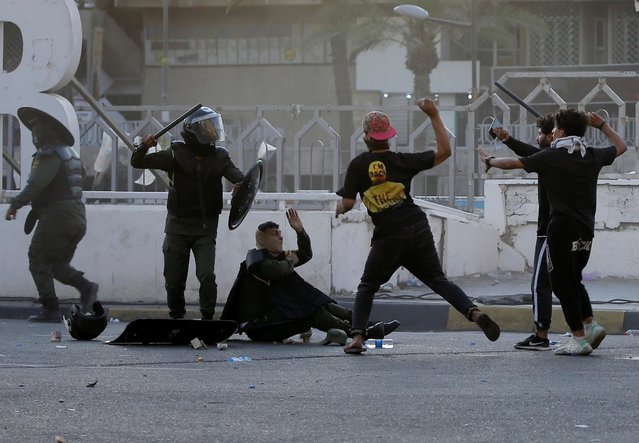 A member of security forces tries to protect himself amid a clash with demonstrators during an anti-government protest in Baghdad, Iraq on May 25, 2021. (Photo by Thaier Al-Sudani/Reuters) 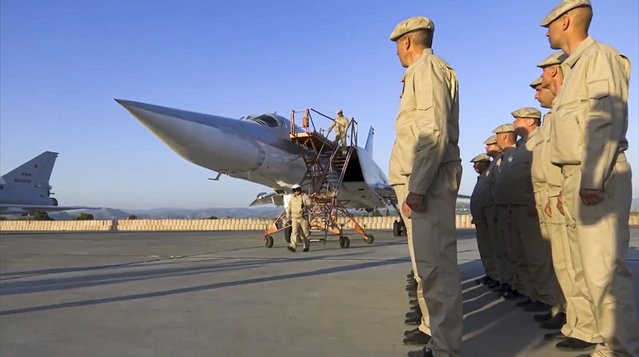 In this photo taken from a video provided on Tuesday, May 25, 2021 by the Russian Defense Ministry Press Service, crew members leave a Russian Tu-22M3 bomber upon its landing at Hemeimeem air base in Syria. Russia's Defense Ministry said that three Tu-22M3 bombers have arrived at the Hemeimeem air base, located in Syria's coastal province of Latakia and the main hub for Moscow's operations in the country. The ministry said bomber crews would fly a series of training missions over the Mediterranean. (Photo by Russian Defense Ministry Press Service via AP Photo) 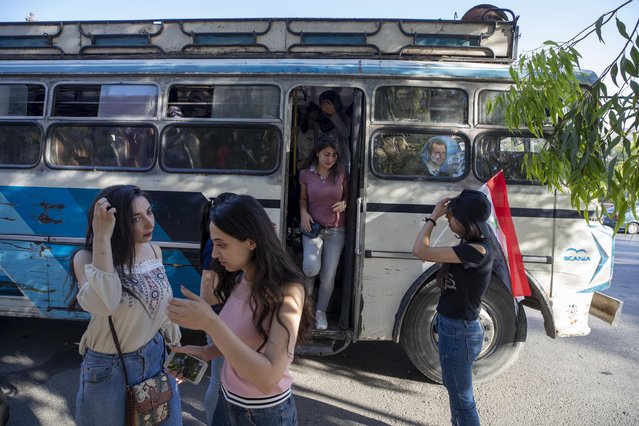 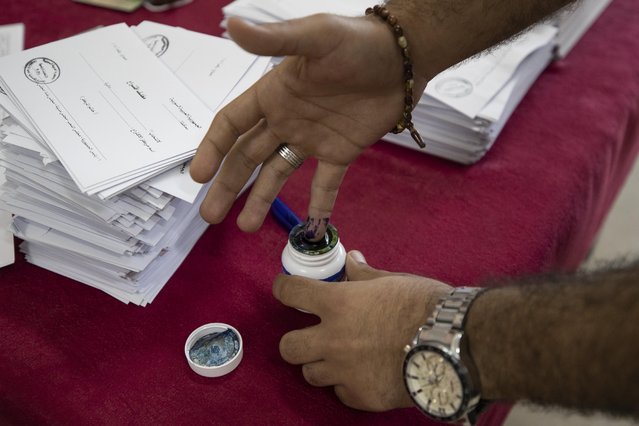 A Syrian man inks his finger after hw votes at a polling station during the Presidential elections in the Syrian capital Damascus, Syria, Wednesday, May 26, 2021. (Photo by Hassan Ammar/AP Photo) 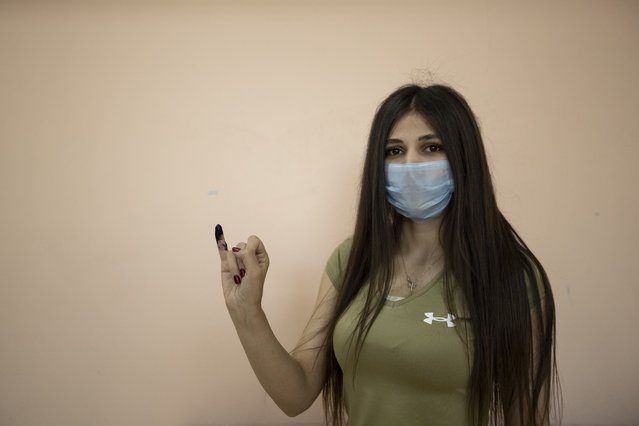 A Syrian student poses for a photograph after she casts her vote at a polling station during the Presidential elections in the Syrian capital Damascus, Syria, Wednesday, May 26, 2021. (Photo by Hassan Ammar/AP Photo) 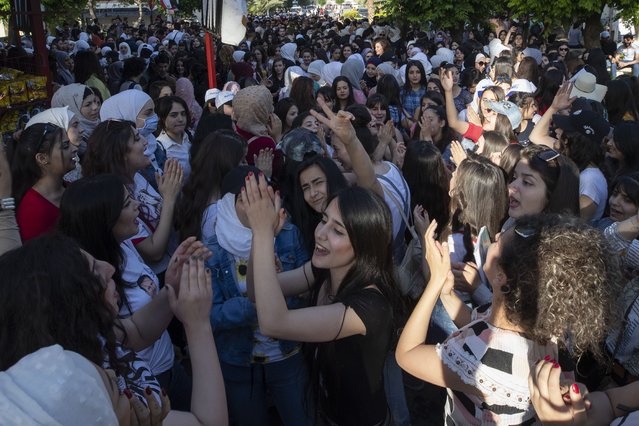 Syrian students dance as attend to votes at a polling station during the Presidential elections in the Syrian capital Damascus, Syria, Wednesday, May 26, 2021. (Photo by Hassan Ammar/AP Photo) 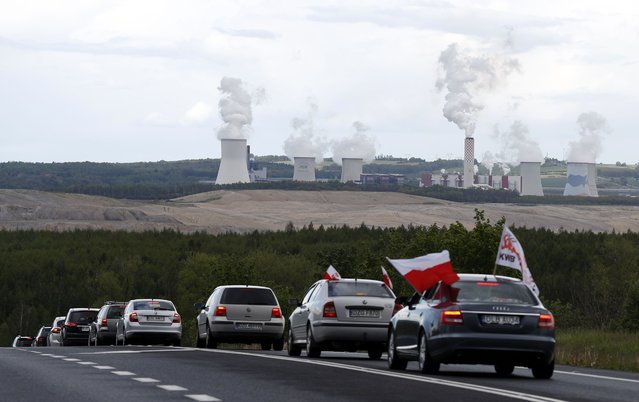 Cars drive slowly to block a border between Czech Republic and Poland near the Turow mine near Bogatynia, Poland, Tuesday, May 25, 2021. People in their cars protested against the decision of the European Union's top court on Friday, that ordered Poland to immediately stop extracting brown coal at the Turow mine near the border with the Czech Republic and Germany. (Photo by Petr David Josek/AP Photo) 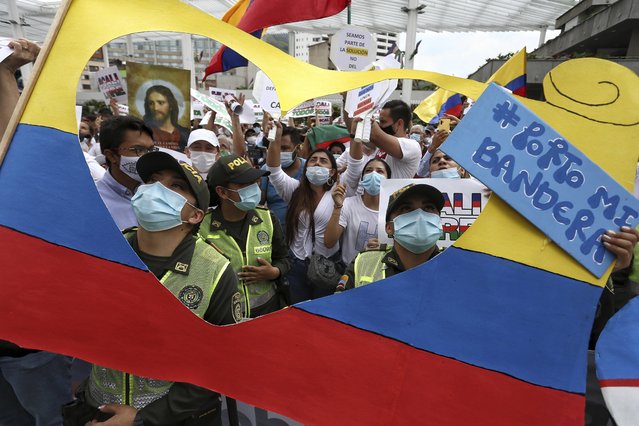 Police and civilians attend a silent march to support the unblocking of the city's main entrance and exit roads that have been blocked by anti-government protests in Cali, Colombia, Tuesday, May 25, 2021. Colombians have taken to the streets for weeks across the country after the government proposed tax increases on public services, fuel, wages, and pensions. (Photo by Andres Gonzalez/AP Photo) 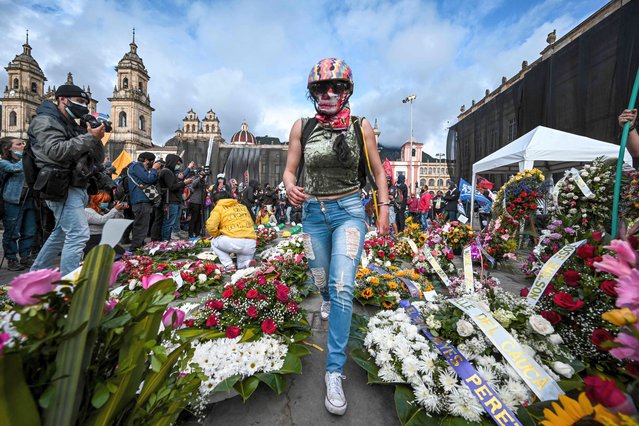 A woman walks amid wreaths in honour of people killed during protests against the government placed outside the Congress building during a session in which Colombian Defense Minister Diego Molano's censure motion is discussed, in Bogota on May 24, 2021. (Photo by Juan Barreto/AFP Photo) 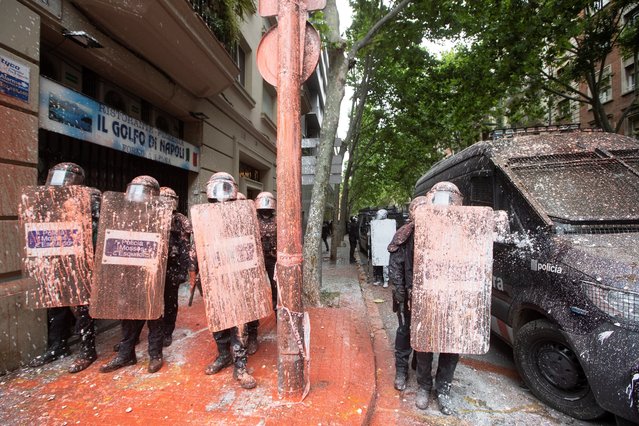 Riot police on guard as people throw paint and objects against them as they protest against the eviction of an occupied dwelling at a building called Bloc Llavors in Poble Sec neighborhood in Barcelona, Spain, 25 May 2021. (Photo by Marta Perez/EPA/EFE) 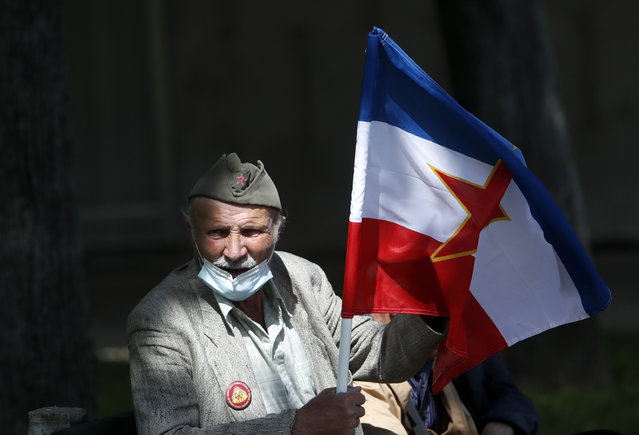 A supporter of the late Yugoslav communist president Josip Broz Tito holds an old Yugoslav flag with the communist five-point star in front of memorial complex prior a wreath laying ceremony in Belgrade, Serbia, Tuesday, May 25, 2021. Some people have gathered at Tito's grave to mark the 129th anniversary of his birth. (Photo by Darko Vojinovic/AP Photo) 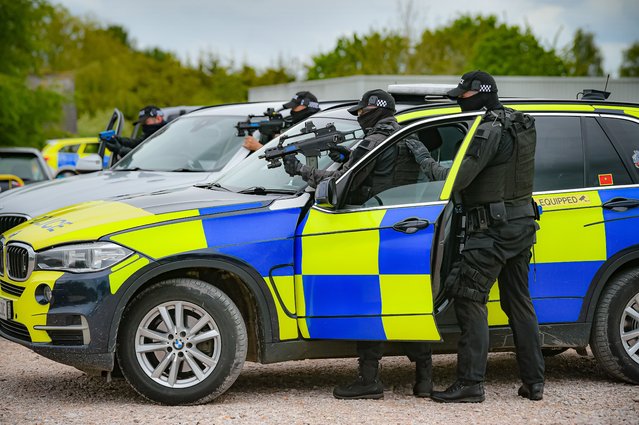 Members of Devon and Cornwall Police during training scenario where they are practicing an armed vehicle stop at the force headquarters in Exeter, as they prepare for the forthcoming G7 Summit in Cornwall on Tuesday, May 25, 2021. (Photo by Ben Birchall/PA Images via Getty Images) 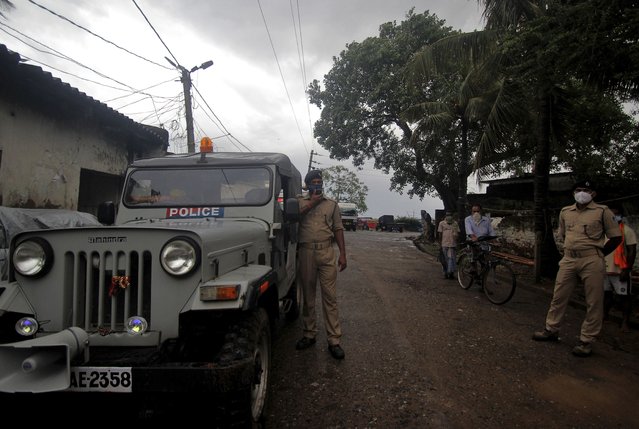 A policeman uses a loudspeaker asking residents of a village to move to cyclone shelters in Balasore district in Odisha, India, Tuesday, May 25, 2021. Tens of thousands of people were evacuated Tuesday in low-lying areas of two Indian states and moved to cyclone shelters to escape a powerful storm barreling toward the eastern coast. (Photo by AP Photo/Stringer) 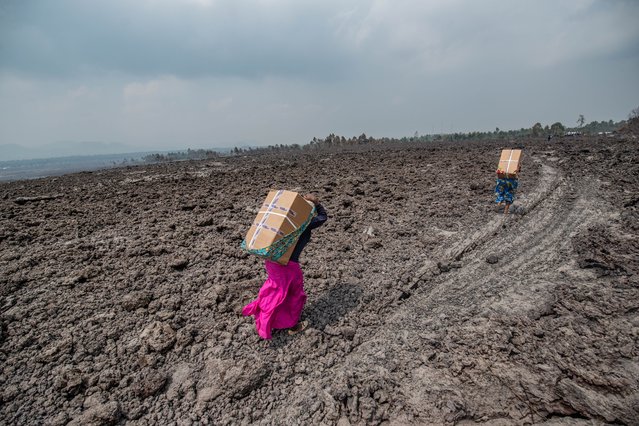 Residents carry goods on their backs while they cross a lava covered field in Buhene, north of Goma on May 25, 2021. The city of Goma, in the east of the Democratic Republic of Congo (DRC), was in anguish on Tuesday of a new eruption of the Nyiragongo volcano towering over the city, where long cracks fractured the ground shaken by violent earthquakes repeat. (Photo by Moses Sawasawa/AFP Photo) 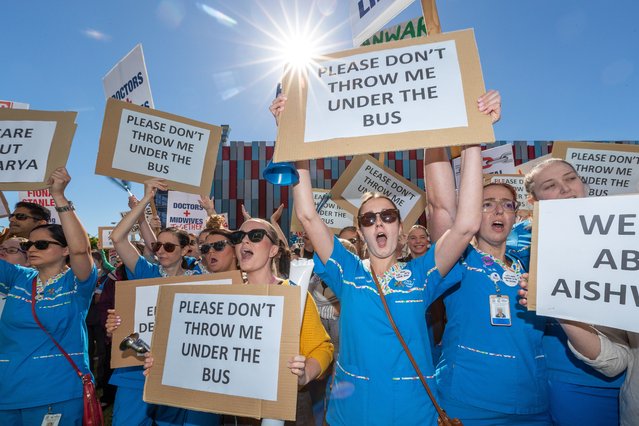 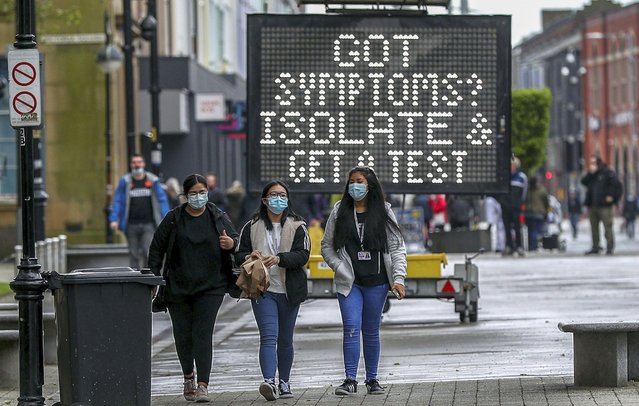 An electronic notice board advises local people to isolate and get tested if they have coronavirus symptoms, in the town centre of Bolton, England, Tuesday May 25, 2021. The British government on Tuesday is facing accusations of introducing local lockdowns by stealth after it published new guidelines for eight areas in England, including Bolton, that it says are hotspots for the coronavirus variant first identified in India. (Photo by Peter Byrne/PA Wire via AP Photo) 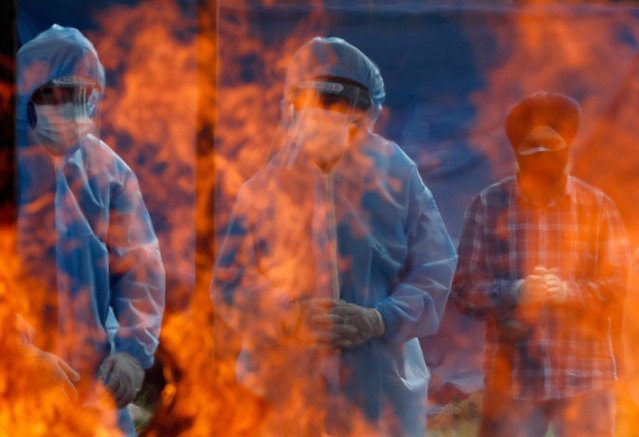 Relatives stand next to the burning pyre of a man who died from the coronavirus disease (COVID-19) during his cremation at a crematorium ground in Srinagar on May 25, 2021. (Photo by Danish Ismail/Reuters) 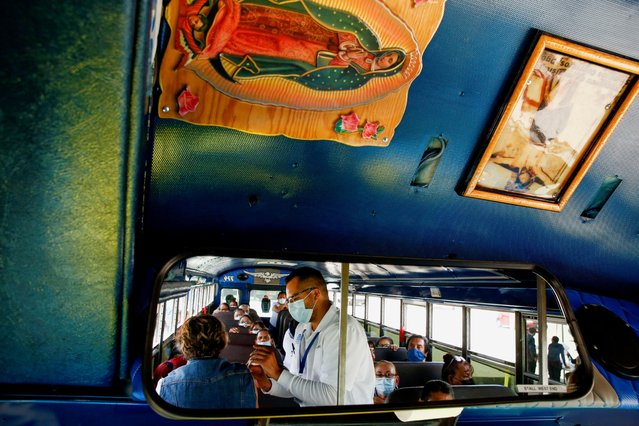 Employees of an assembly factory are seen reflected in the mirror of a bus as they receive a dose of the Pfizer-BioNTech coronavirus disease (COVID-19) vaccine in Ciudad Juarez, Mexico on May 24, 2021. (Photo by Jose Luis Gonzalez/Reuters) 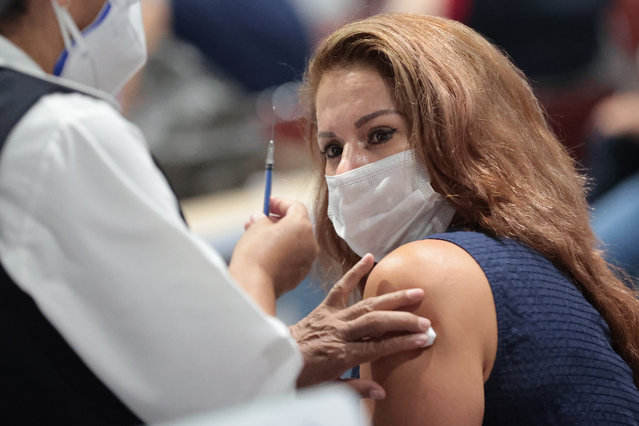 A nurse shows a syringe with a dose of the COVID-19 vaccine to a citizen who is about to receive it during a vaccination day as part of the campaign in Mexico City at Pepsi Center WTC on May 25, 2021 in Mexico City, Mexico. According to the head of Govermnment, Claudia Sheinbaum, seven municipalities will start their campaign today which plans to apply the first dose to over 500,000 citizens between 50 and 59 years old. (Photo by Hector Vivas/Getty Images) 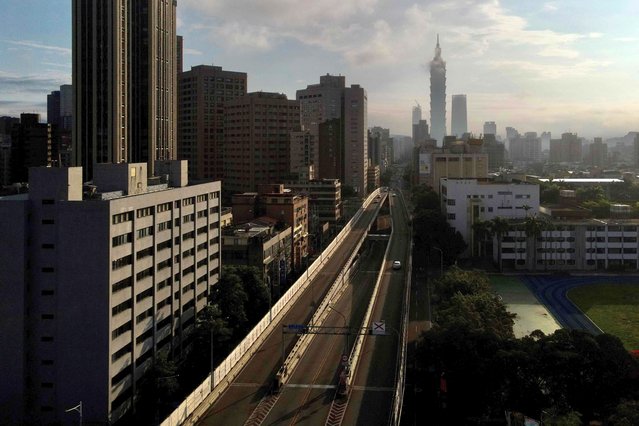 An aerial view shows near-deserted roads in Taipei on May 25, 2021, after Taiwan on May 19 raised its coronavirus alert level following a widening outbreak. (Photo by Sam Yeh/AFP Photo) 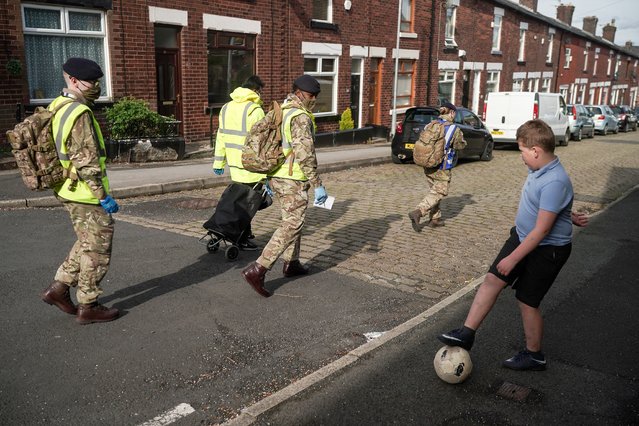 A boy plays football in the street as gunners from the Royal Horse Artillery distribute Covid-19 polymerase chain reaction (PCR) tests to local residents on May 24, 2021 in Bolton, England. The Covid-19 B.1.617.2 virus variant first identified in India has caused a spike in cases in the city. The Army has been brought in to help with surge testing. (Photo by Christopher Furlong/Getty Images) 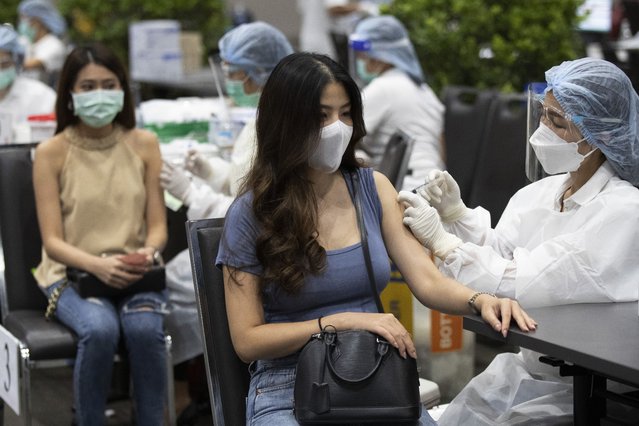