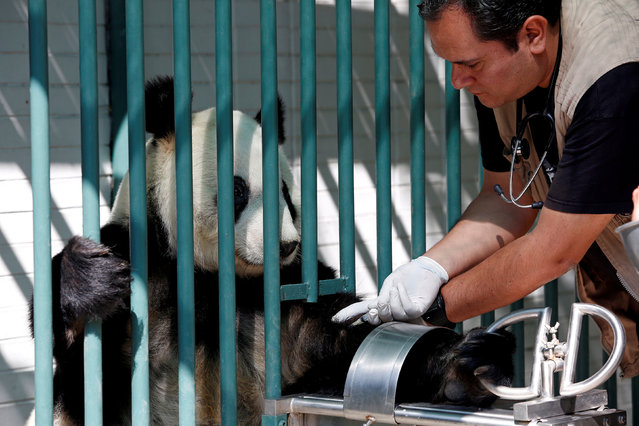 Veterinarian Alberto Olascoaga takes a blood sample from Xin Xin, a female giant panda, inside her enclosure at Chapultepec zoo in Mexico City, Mexico May 25, 2018. (Photo by Ginnette Riquelme/Reuters) 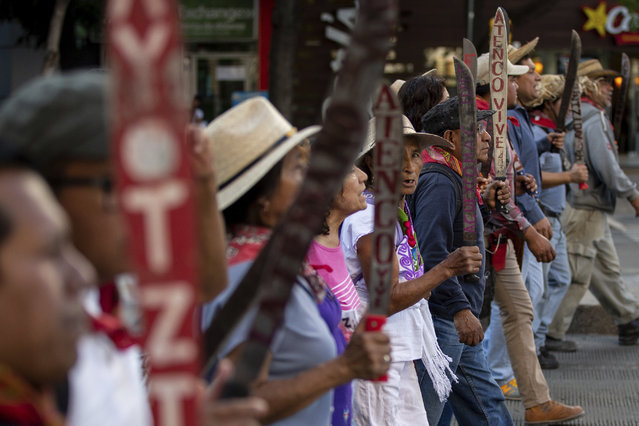 A group of men march holding machetes upright during a protest to raise awareness of 43 students who went missing nearly four years ago, in Mexico City, Saturday, May 26, 2018. The rural college students mysteriously vanished on Sept. 26, 2014 in Iguala when they were interrupted on their way to demonstration by police. Family members and protestors continually march to demand justice for the 43. (Photo by Anthony Vazquez/AP Photo) 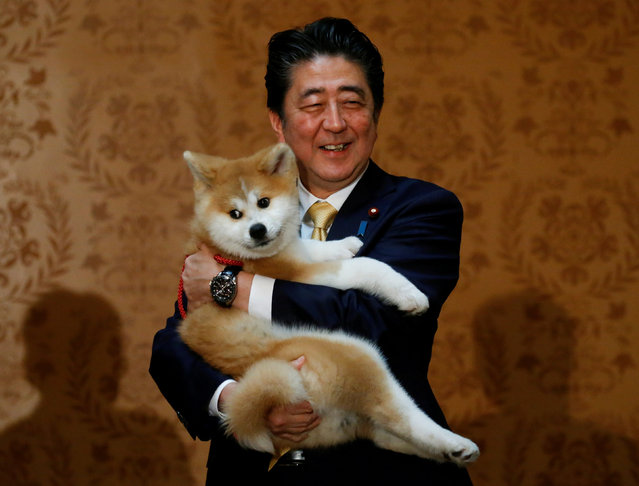 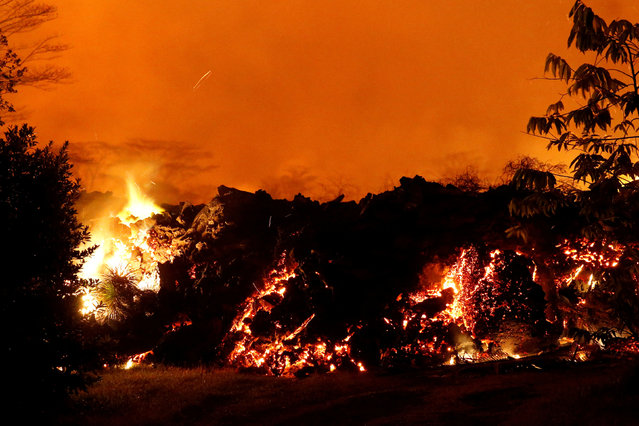 Lava from the Kilauea volcano eruption crosses Kahukai St. in the Leilani Estates near Pahoa, Hawaii, U.S., May 25, 2018. (Photo by Marco Garcia/Reuters) 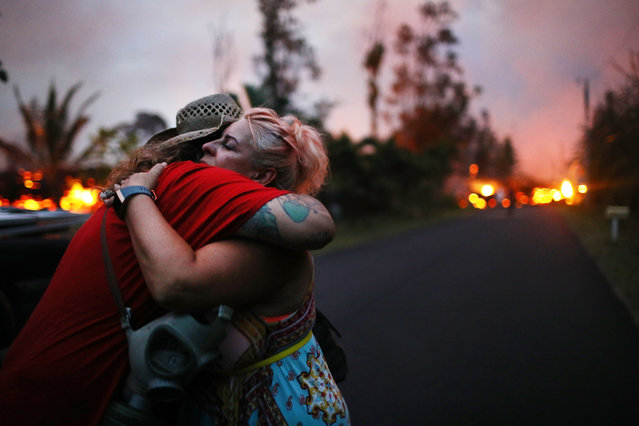 Zivile Roditis hugs Howie Rosin (L), shortly after Roditis' home was destroyed by lava from a Kilauea volcano fissure, in Leilani Estates, on Hawaii's Big Island, on May 25, 2018 in Pahoa, Hawaii. (Photo by Mario Tama/Getty Images) 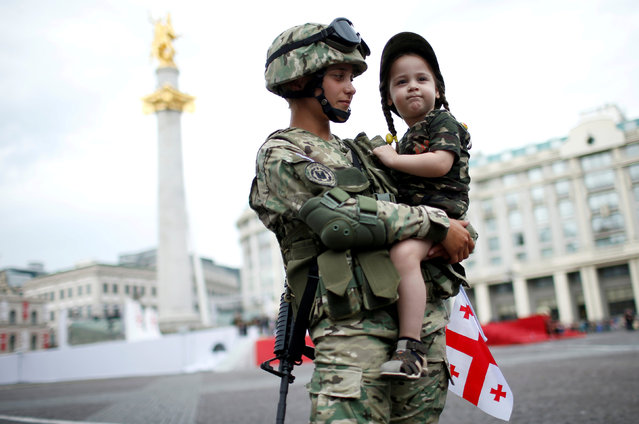 Servicewoman, Tamar Kurkumuli, 25, holds her 3-year-old daughter Nino, before the oath-taking ceremony as Georgia marks the 100th anniversary of its independence in Tbilisi, Georgia, May 26, 2018. (Photo by David Mdzinarishvili/Reuters) 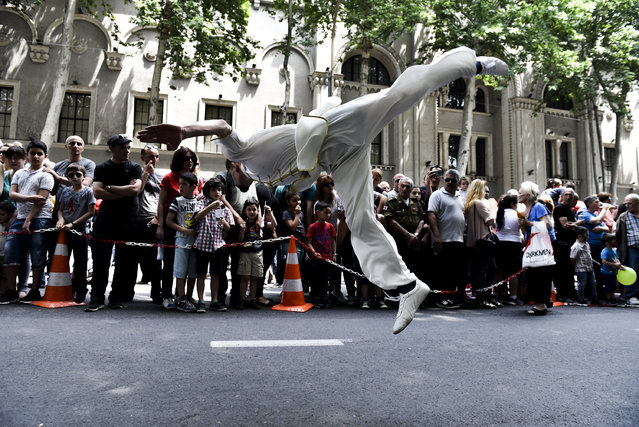 An acrobat entertains the crowd in Tbilisi, Georgia during celebrations marking the 100th anniversary of the foundation of the first Georgian democratic state on May 26, 2018. (Photo by Mzia Seganelidze/RFE/RL) 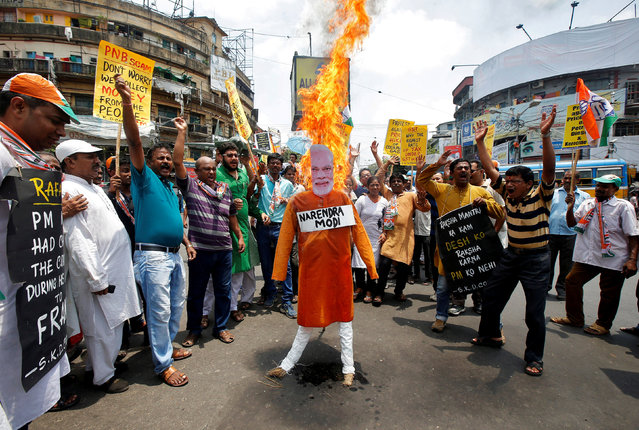 Supporters of India's main opposition Congress party shout slogans as they burn an effigy depicting India's Prime Minister Narendra Modi during a protest against the rise in fuel prices, in Kolkata, India, May 26, 2018. (Photo by Rupak De Chowdhuri/Reuters) 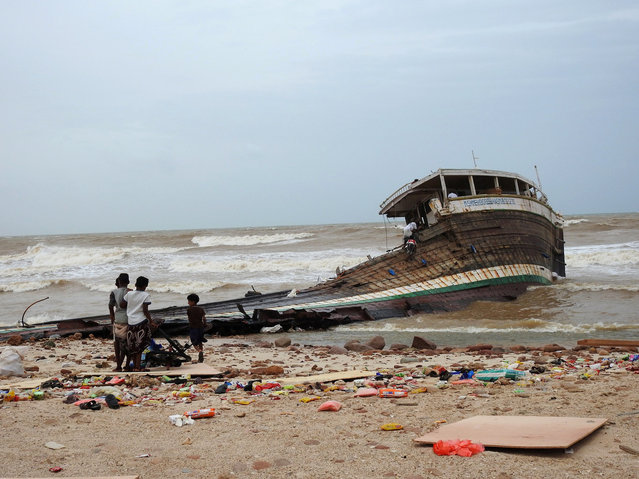 People search among the wreckage of a boat destroyed by Cyclone Mekunu in Socotra Island, Yemen, May 25, 2018. (Photo by Reuters/Stringer) 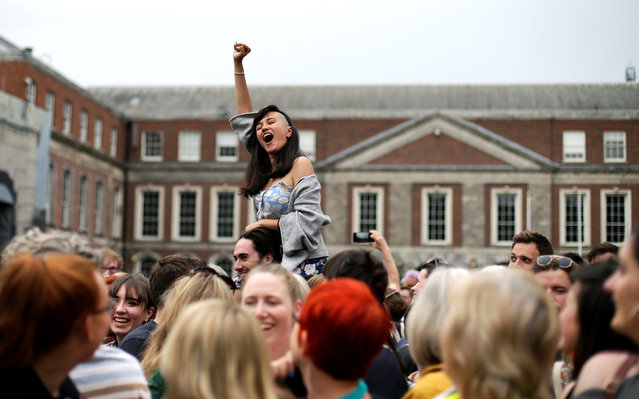 People celebrate the result of yesterday's referendum on liberalizing abortion law, in Dublin, Ireland, May 26, 2018. (Photo by Max Rossi/Reuters) 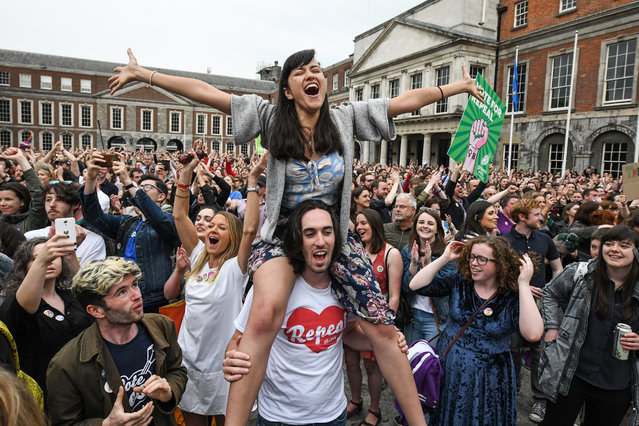 Supporters celebrate at Dublin Castle following the result Irish referendum result on the 8th amendment, concerning the country's abortion laws, on May 26, 2018 in Dublin, Ireland. Ireland has voted in favour of overturning the abortion ban by 66.4% to 33.6%, which is a “resounding” victory for the yes campaign. (Photo by Jeff J. Mitchell/Getty Images) 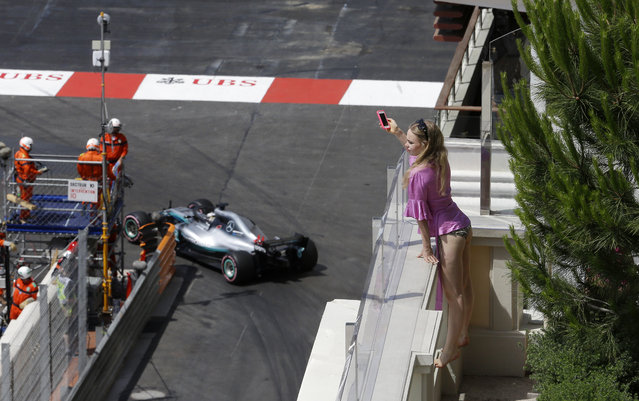 A woman takes pictures as Britain driver Lewis Hamilton steers his Mercedes during the third free practice at the Monaco racetrack, in Monaco, Saturday, May 26, 2018. The Formula one race will be held on Sunday. (Photo by Luca Bruno/AP Photo) 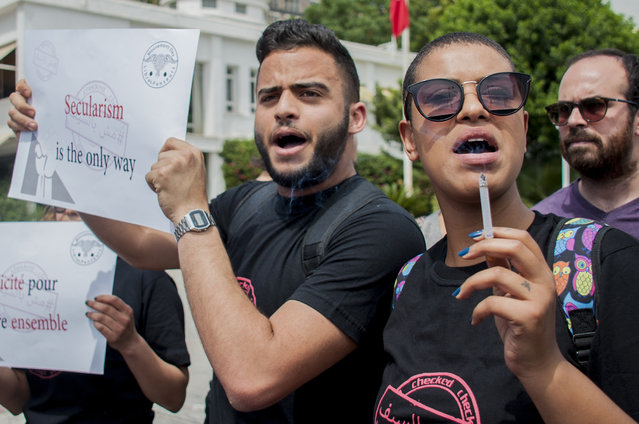 A Tunisian women smokes a cigarette during a protest against the July 1981 circular, forbidding restaurants and bars owners to open their shops during the fast of the Muslim holy month of Ramadan, in Tunis, Tunisia, Sunday, May 27, 2018. (Photo by Hassene Dridi/AP Photo) 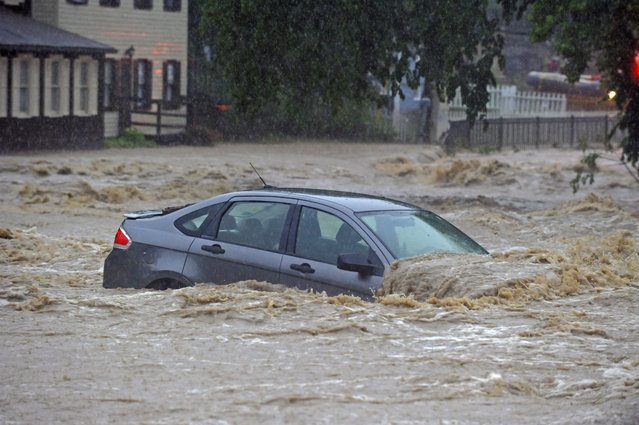 A parked car is flooded in a lot near Main Street and Ellicott Mills Road as a heavy storm caused flash floods in Ellicott City, Md., Sunday, May 27, 2018. Roaring flash floods struck the Maryland city Sunday that had been wracked by similar devastation two years ago, its main street turned into a raging river that reached the first floor of some buildings and swept away parked cars, authorities and witnesses say. (Photo by Kenneth K. Lam/The Baltimore Sun via AP Photo) 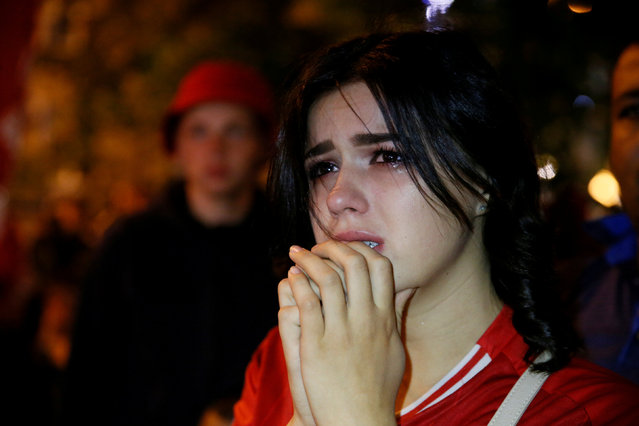 Liverpool fan looks dejected after watching the match on a television screen outside the stadium during the Champions League Final soccer match between Real Madrid and Liverpool at the Olimpiyskiy Stadium in Kiev, Ukraine, Saturday, May 26, 2018. (Photo by Valentyn Ogirenko/Reuters) 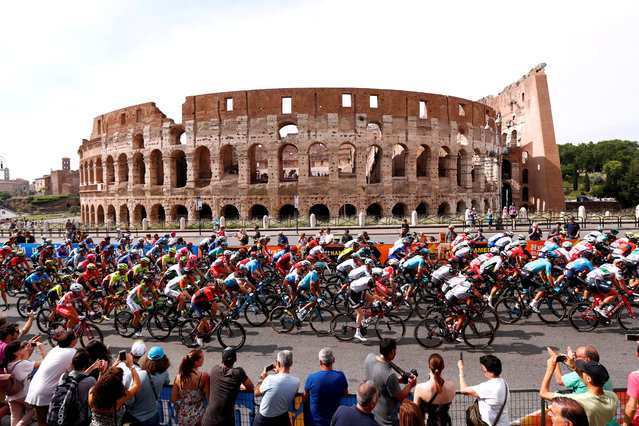 The pack rides past the ancient Colosseum during the 21 st and last stage of the 101 st Giro d' Italia, Tour of Italy cycling race, on May 27, 2018 in Rome, Italy. (Photo by Alessandro Garofalo/Reuters) 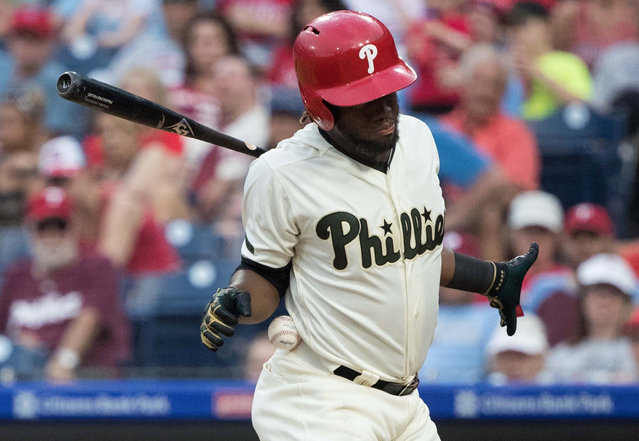 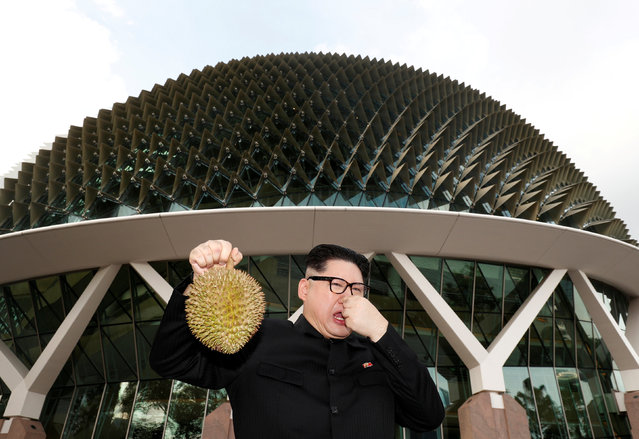 Howard, an Australian-Chinese impersonating North Korean leader Kim Jong Un, poses with a durian at the Esplanade in Singapore May 27, 2018. (Photo by Edgar Su/Reuters) 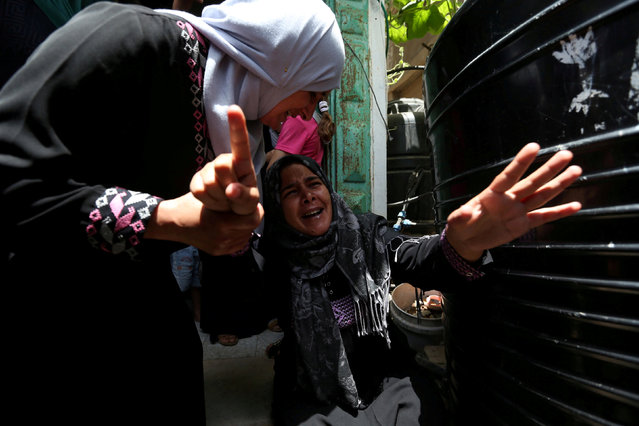 A relative mourns during the funeral of a Palestinian Islamic Jihad militant, who was killed in Israeli tank shelling, in the southern Gaza Strip May 27, 2018. (Photo by Ibraheem Abu Mustafa/Reuters) 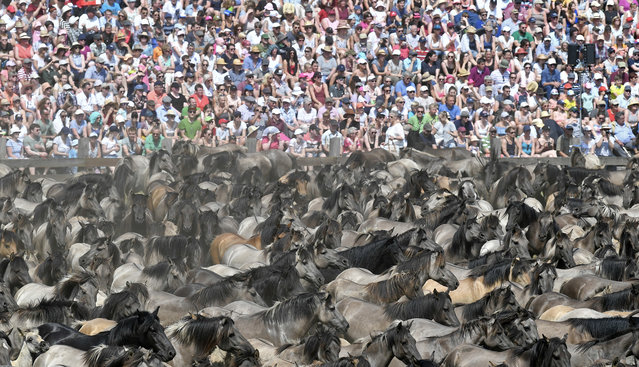 In this May 26, 2018 photo thousands for spectators watch when wild horses are driven together in Duelmen, Germany, that young men can separate the young stallions from one of Europe's last herds of wild horses. About 400 native breed horses are left to find food and shelter, must cope with illness and death. Only once a year they have direct contact with humans when the young stallions are caught from the flock, that was first mentioned in chronicles 700 years ago. (Photo by Martin Meissner/AP Photo) 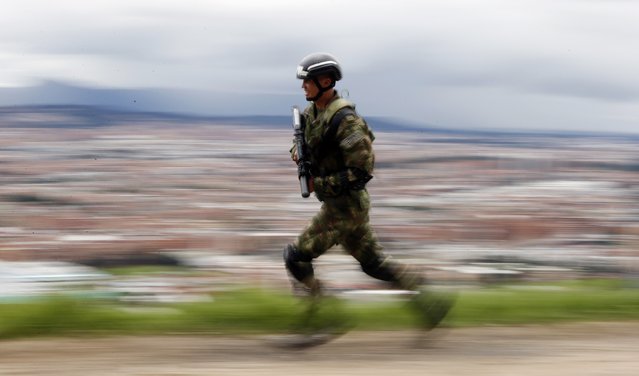 A solider runs to his position to secure a road in the outskirts of Bogota, Colombia, as part of pre-electoral security, Saturday, May 26, 2018. Colombians go to the polls tomorrow to elect a new president. (Photo by Fernando Vergara/AP Photo) 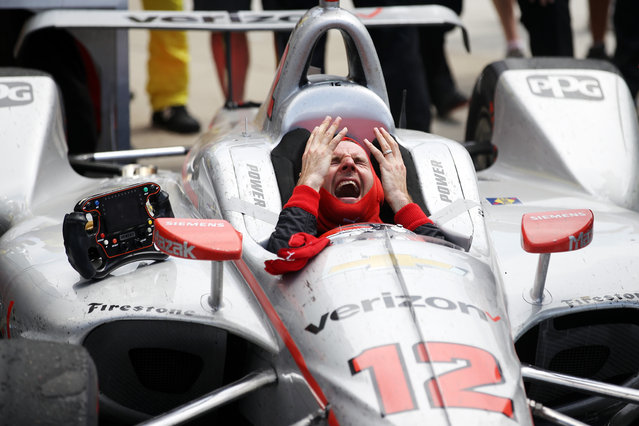 Will Power of Australia, driver of the #12 Verizon Team Penske Chevrolet celebrates after winning the 102nd Running of the Indianapolis 500 at Indianapolis Motorspeedway on May 27, 2018 in Indianapolis, Indiana. (Photo by Chris Graythen/Getty Images) 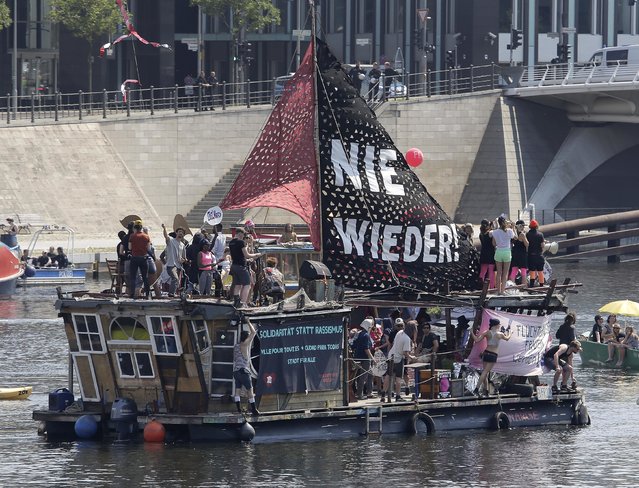 Activists protest against racism on a ship on the Spree river in Berlin, Germany, Sunday, May 27, 2018. The AfD that swept into Parliament last year on a wave of anti-migrant sentiment is staging a march Sunday through the heart of Berlin to protest against the government. (Photo by Markus Schreiber/AP Photo) 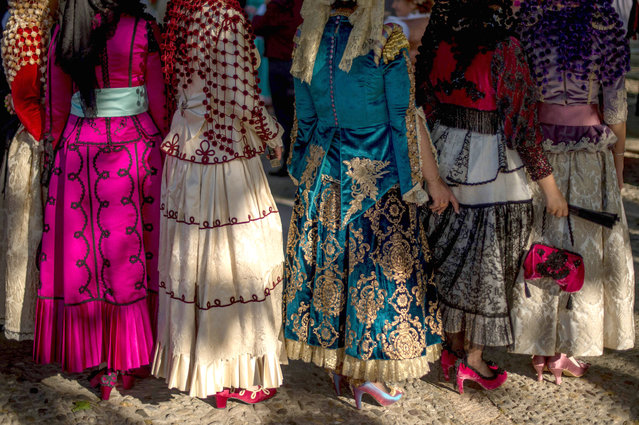 Woman wearing traditional costumes take part in the reenactment of a battle of the Spanish War of Independence (1808-1814) against France, in Ronda, southern Spain, on May 25, 2018. “Ronda Romantica” is a three-day cultural, historical and tourist event during which thousands of people from Ronda and other towns from the surrounding Serrania de Ronda (Ronda Mountain Range), dress in traditional costumes to recreate the era of the bandits, drovers and romantic travellers of the nineteenth century. (Photo by Jorge Guerrero/AFP Photo) 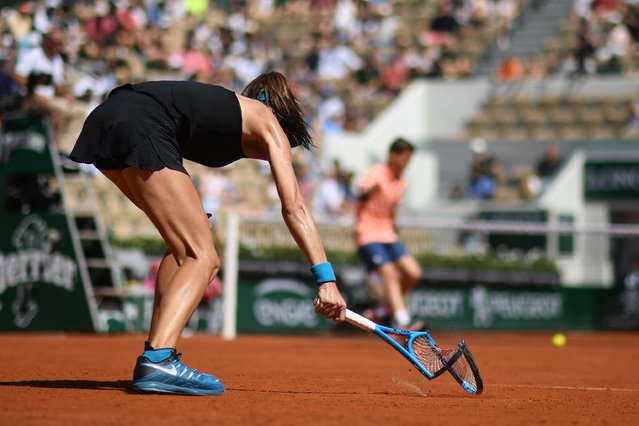 Australia's Ajla Tomljanovic smashes her racquet into the court after a point against Ukraine's Elina Svitolina during their women's singles first round match on day one of The Roland Garros 2018 French Open tennis tournament in Paris on May 27, 2018. (Photo by Eric Feferberg/AFP Photo) 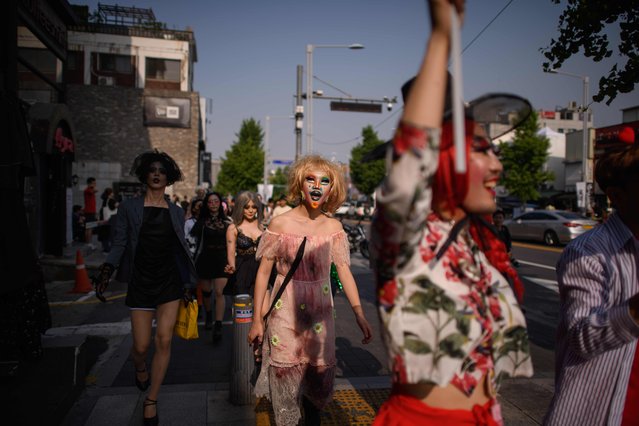 In a photo taken on May 26, 2018 participants of the “Seoul Drag Parade” march in the Itaewon district of Seoul. South Korea held its first ever drag parade this weekend, a small but significant step for rights activists in a country that remains deeply conservative when it comes to gender and sexuality. (Photo by Ed Jones/AFP Photo) 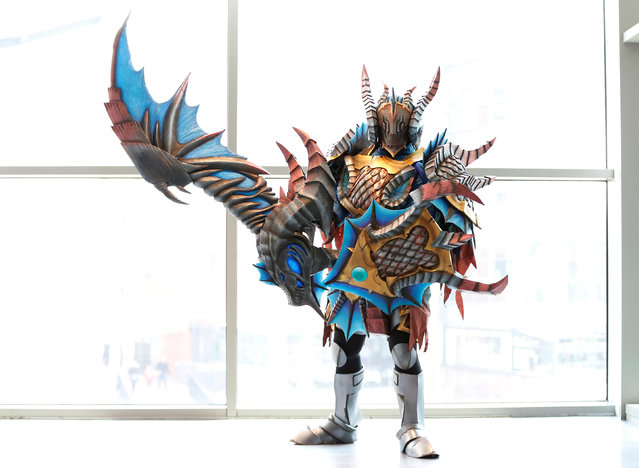 A fan in cosplay poses for a photograph during the first Dota 2 Major in the UK – ESL One Birmingham 2018 at the Arena Birmingham, Britain on May 26, 2018. (Photo by Ed Sykes/Reuters/Action Image) 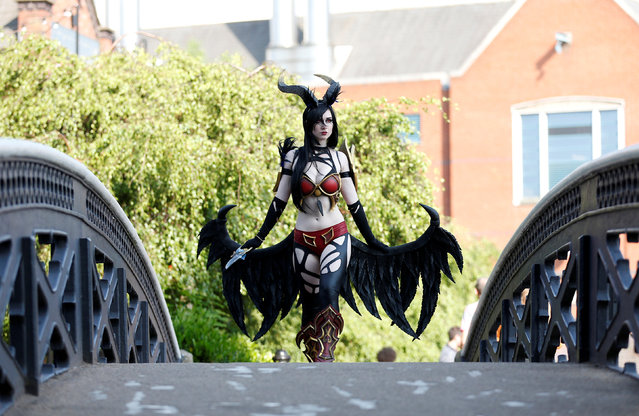 A cosplay competitor poses for a photograph outside the arena during the first Dota 2 Major in the UK – ESL One Birmingham 2018 at the Arena Birmingham, Britain on May 26, 2018. (Photo by Ed Sykes/Reuters/Action Image)
Edit Del
28 May 2018 07:20:00, post received 0 comments
Publication archive:
←   →
Popular tags:
All tags
Last searches: