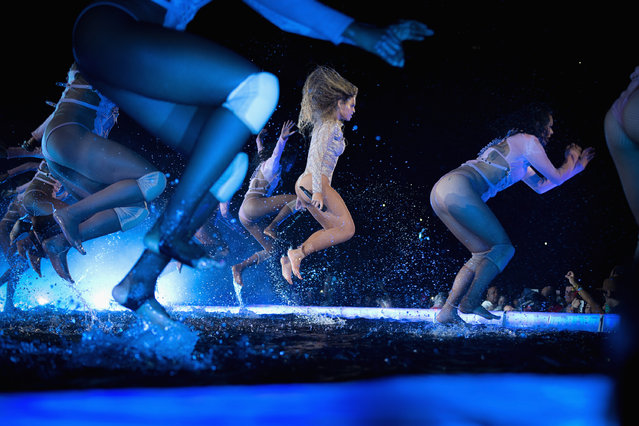 Entertainer Beyonce on stage during “The Formation World Tour” at Soldier Field on May 27, 2016 in Chicago, Illinois. (Photo by Larry Busacca/PW/WireImage For Parkwood Entertainment) 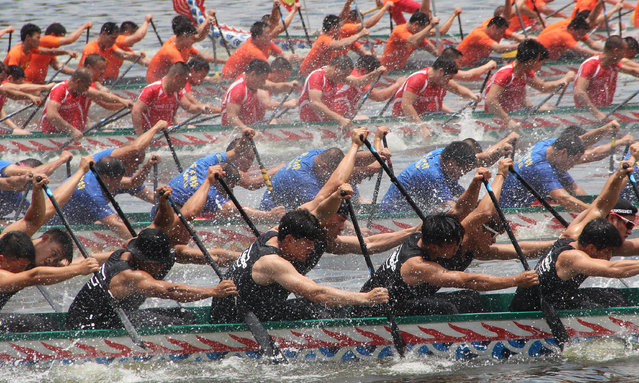 Participants splash water as they take part in a dragon boat race during a local celebration ahead of the annual Dragon Boat Festival in Xiamen, Fujian Province, China, May 28, 2016. (Photo by Reuters/Stringer) 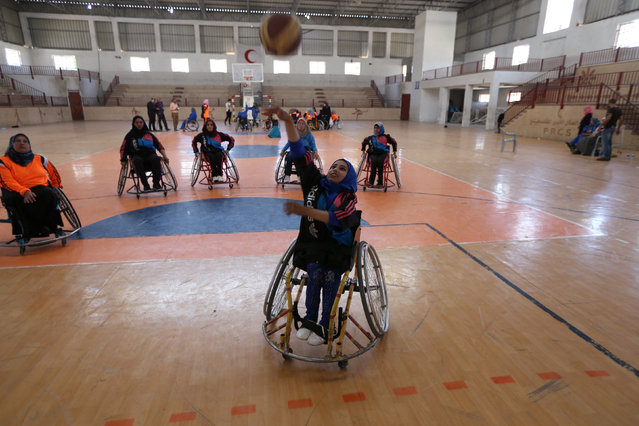 Jess Markt of the U.S. coaches disabled Palestinian women on wheelchair basketball during a training session organised by the International Committee of the Red Cross (ICRC) in Khan Younis in the southern Gaza Strip May 28, 2016. (Photo by Ibraheem Abu Mustafa/Reuters) 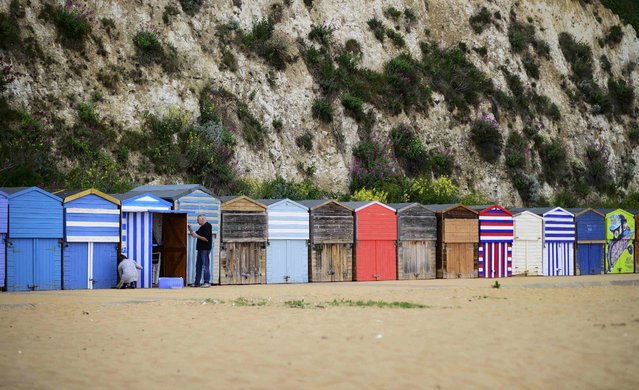 A couple paint their beach hut on the seafront in Broadstairs, Britain May 29, 2016. (Photo by Dinuka Liyanawatte/Reuters) 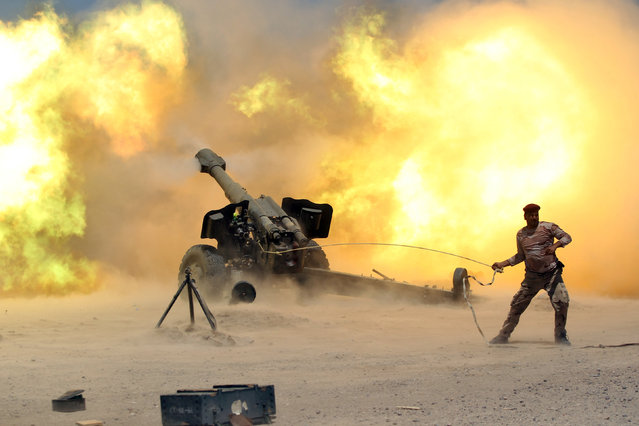 A member of the Iraqi security forces fires artillery during clashes with Islamic State militants near Falluja, Iraq, May 29, 2016. (Photo by Alaa Al-Marjani/Reuters) 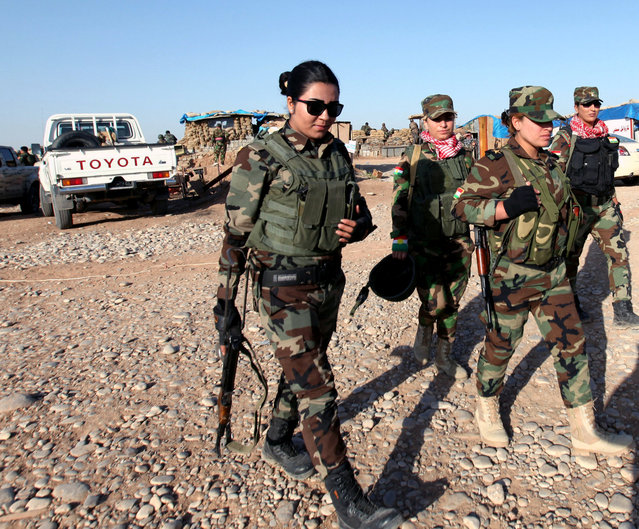 Female Kurdish Peshmerga walk with their weapons in a village east of Mosul, Iraq, May 29, 2016. (Photo by Azad Lashkari/Reuters) 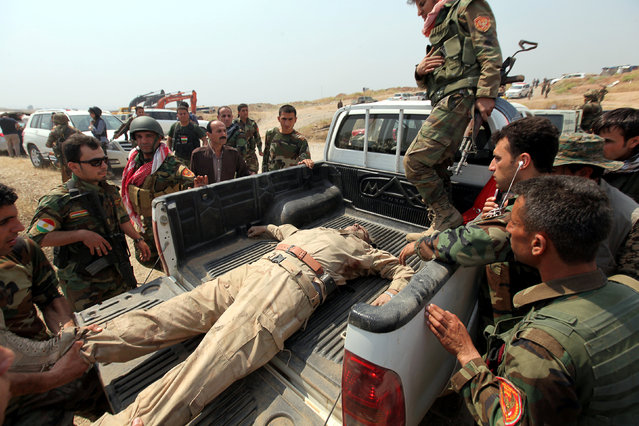 Kurdish Peshmerga forces carry their comrade, who was given an injection after he was wounded, in the back of the car in a village east of Mosul, Iraq, May 29, 2016. (Photo by Azad Lashkari/Reuters) 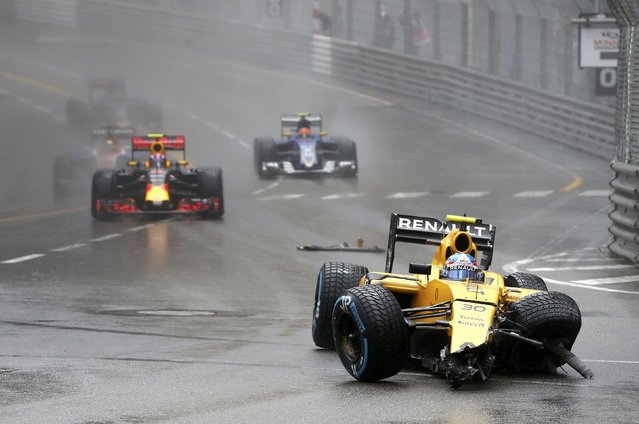 Formula One, Monaco Grand Prix, Monaco on May 29, 2016. Renault F1 driver Jolyon Palmer's car is seen after he crashed. (Photo by Eric Gaillard/Reuters) 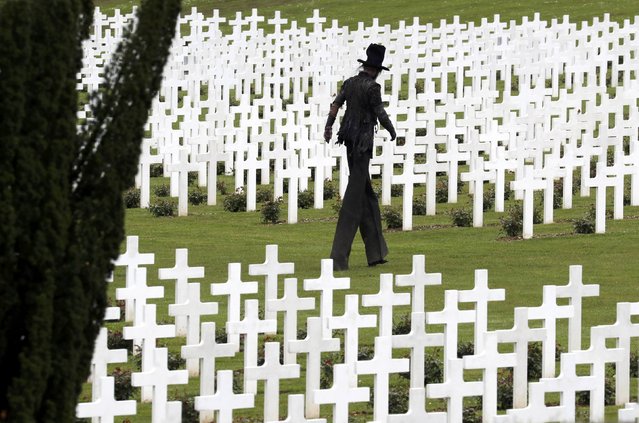 A performer depicting death walks amongst tombstones at the French National cemetery outside the Douaumont Necropolis and Ossuary, France, May 29, 2016, during a ceremony marking the 100th anniversary of the battle of Verdun, one of the largest battles of the First World War (WWI) on the Western Front. (Photo by Philippe Wojazer/Reuters) 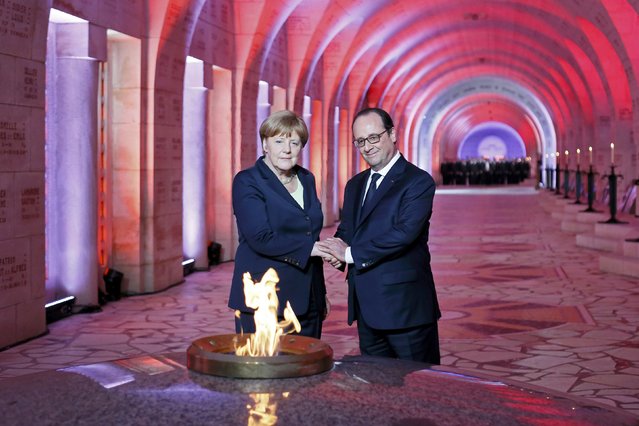 French President Francois Hollande and German Chancellor Angela Merkel stand hand in hand after lighting the eternal flame at Douaumont Necropolis and Ossuary, France, May 29, 2016, during a ceremony marking the 100th anniversary of the battle of Verdun, one of the largest battles of the First World War (WWI) on the Western Front. (Photo by Mathieu Cugnot/Reuters) 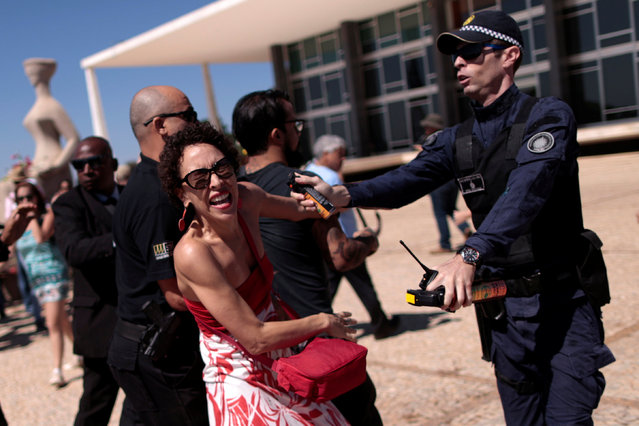 A woman clashes with police during a protest against rape and violence against women in Brasilia, Brazil, May 29, 2016. (Photo by Ueslei Marcelino/Reuters) 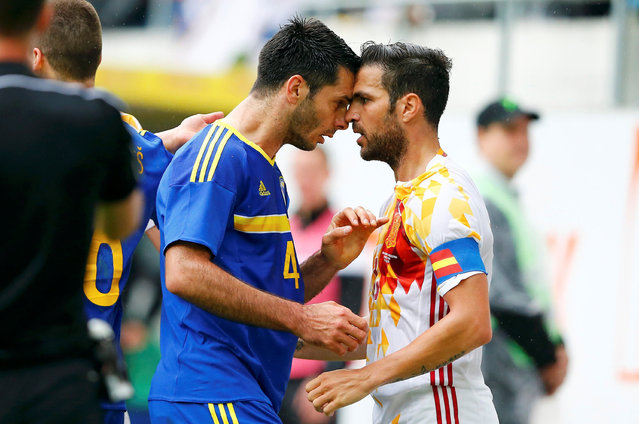 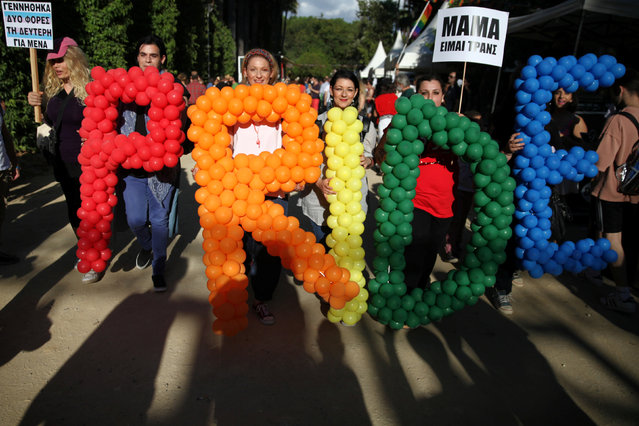 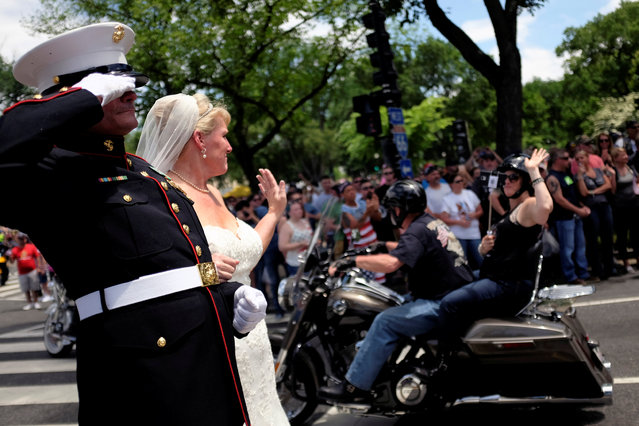 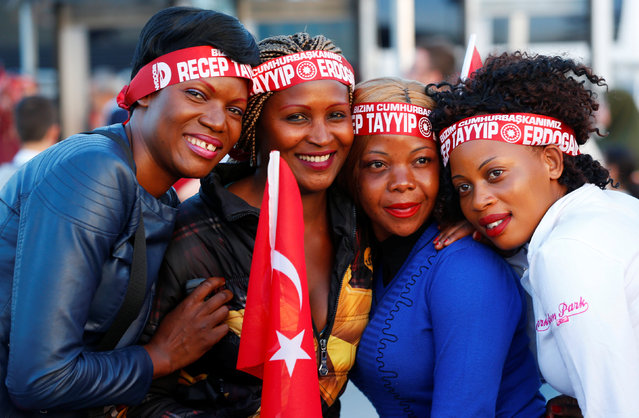 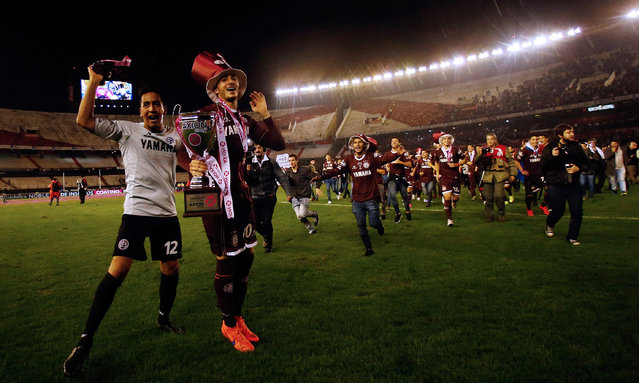 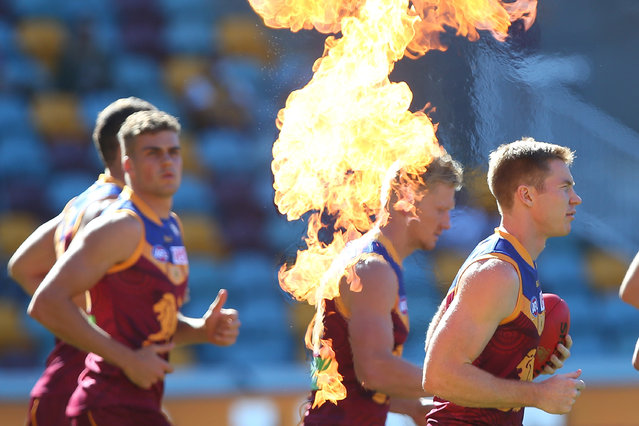 Lions runn out for the start of the round 10 AFL match between the Brisbane Lions and the Hawthorn Hawks at The Gabba on May 28, 2016 in Brisbane, Australia. (Photo by Chris Hyde/Getty Images) 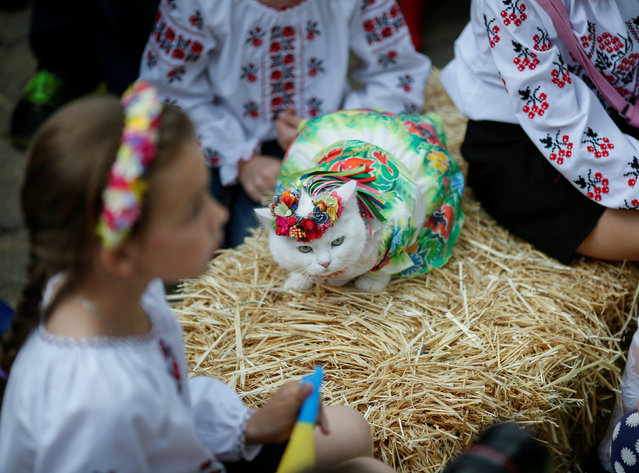 A cat dressed in a traditional Ukrainian embroidered shirt takes part in a parade in Kiev, Ukraine on May 28, 2016. (Photo by Gleb Garanich/Reuters) 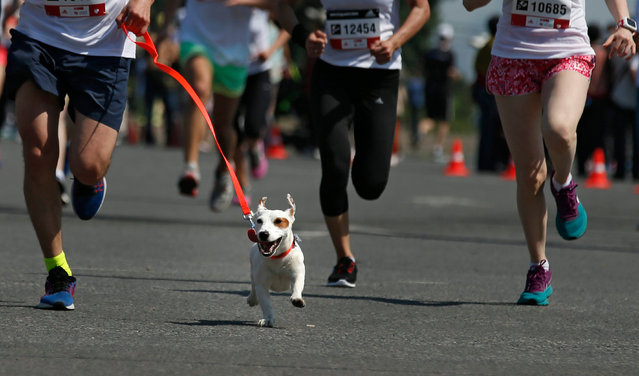 A small dog runs during the adidas Running Hearts charity race in Moscow, Russia, 29 May 2016. More than ten thoushend people attended this year race with a distance of tree, ten and 21 km. The race was organized by the charity Foundation 'Naked Heart' founded by famous top model Natalia Vodianova in 2004. (Photo by Sergei Ilnitsky/EPA) 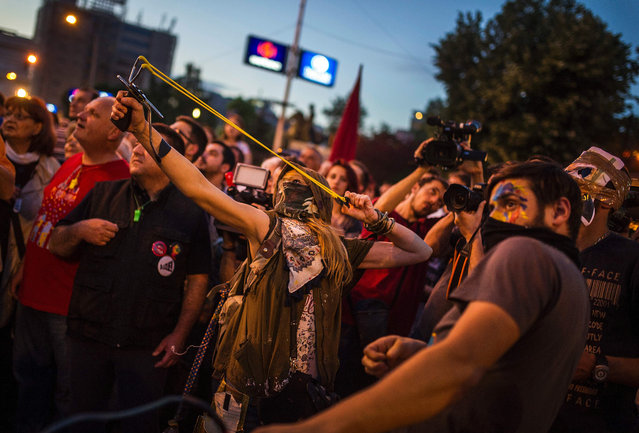 Hooded protestors use slingshots to throw colored paint balls on the Parliament building , during an anti-government protest in Skopje on May 27, 2016, in a series of protests dubbed Colorful Revolution. President Gjorge Ivanov on Friday said he had partially retracted his controversial pardons of 56 persons, which has sparked mass protests and worsened Macedonia's political crisis. (Photo by Robert Atanasovski/AFP Photo) 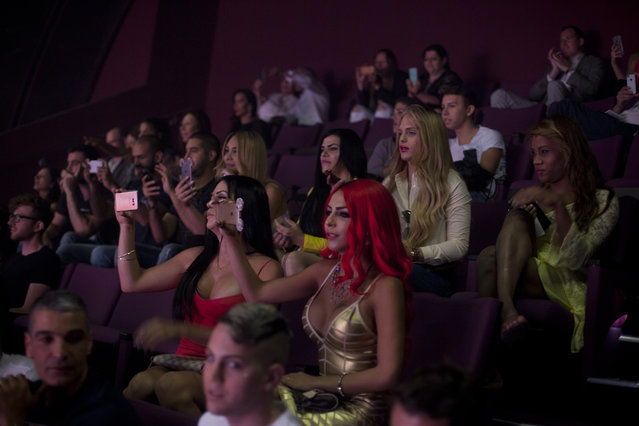 People in the crowd watch the first Miss Trans Israel beauty pageant on May 27, 2016 in Tel Aviv, Israel. Twelve Israeli transgender finalists took part in the event. The event marks the beginning of the 2016 Pride events. (Photo by Lior Mizrahi/Getty Images) 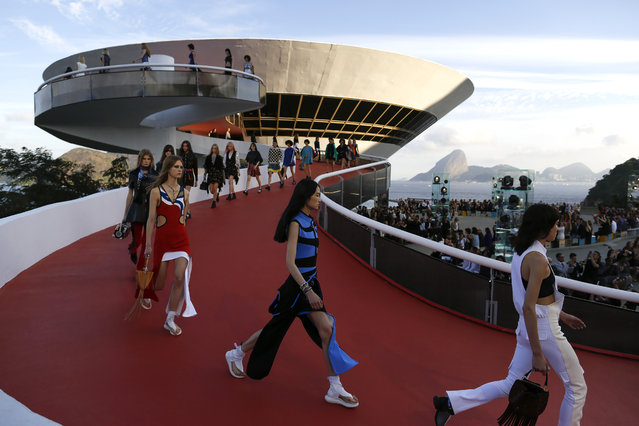 Models walk down a ramp of the Contemporary Art Museum wearing creations from the Louis Vuitton Crusie 2017 collection, in Niteroi, Brazil, Saturday, May 28, 2016. The elite of the fashion world flocked to Brazil, defying an outbreak of the Zika virus, an economic meltdown and the profound political crisis afflicting the country to attend a runway show Saturday by revered French label. The iconic Sugarloaf Mountain is pictured in the background on right. (Photo by Leo Correa/AP Photo) 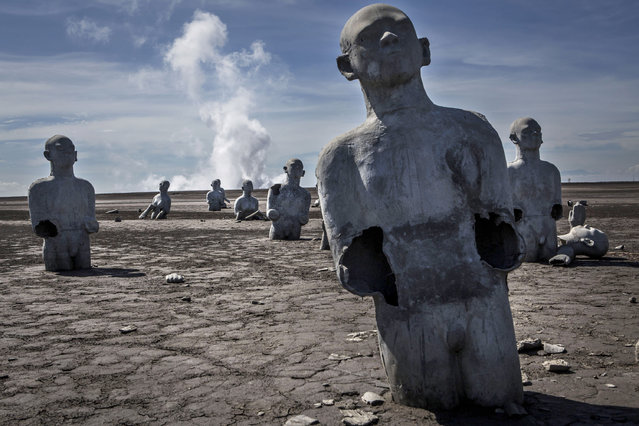 Survivor statues are displayed at mudflow areas to signify the lives of victims on May 27, 2016 in Sidoarjo, East Java, Indonesia. On 29 May, 2006, a mudflow eruption began in the Sidoarjo regency of Indonesia where nearly 40,000 villagers were displaced and twenty lives were lost, two days after a 6.3 magnitude earthquake struck the region. Indonesian oil and gas company, PT Lapindo Brantas, has been deemed to be partially responsible for the disaster and although compensations have been in the pipeline, its been slow to reach those affected. Ten years on, the mud geysers continue to spurt mud out on a daily basis and high levels of heavy metals have been detected in nearby rivers. (Photo by Ulet Ifansasti/Getty Images) 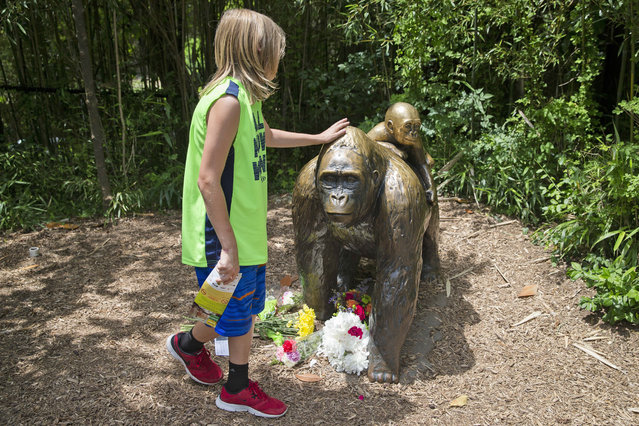 A child touches the head of a gorilla statue where flowers have been placed outside the Gorilla World exhibit at the Cincinnati Zoo & Botanical Garden, Sunday, May 29, 2016, in Cincinnati. On Saturday, a special zoo response team shot and killed Harambe, a 17-year-old gorilla, that grabbed and dragged a 4-year-old boy who fell into the gorilla exhibit moat. Authorities said the boy is expected to recover. He was taken to Cincinnati Children's Hospital Medical Center. (Photo by John Minchillo/AP Photo) 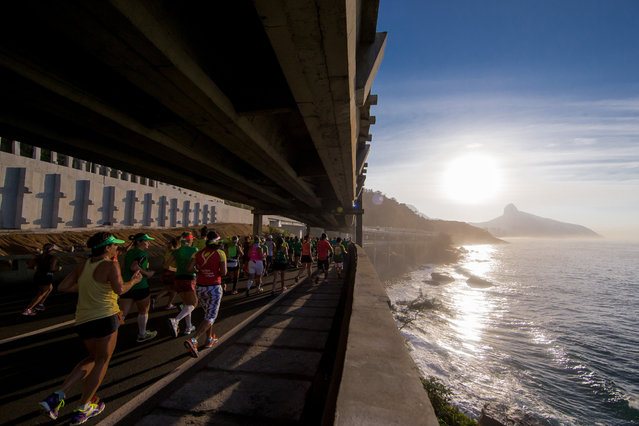 Participants run through Elevado do Joa during the Rio de Janeiro Marathon, on May 29, 2016 in Rio de Janeiro, Brazil. (Photo by Buda Mendes/Getty Images) 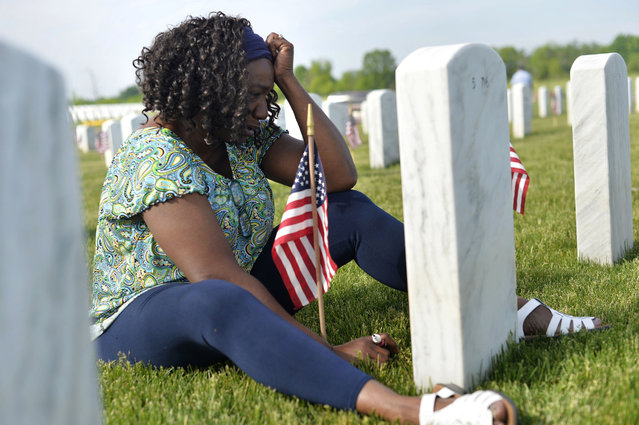 Frances Jockwig, of Gladwin, cries as she visits her husband's grave on Sunday, May 29, 2016, the morning before a Memorial Day ceremony honoring deceased veterans at Great Lakes National Cemetery in Holly,Mich. (Photo by Rachel Woolf/The Flint Journal-MLive.com via AP Photo) 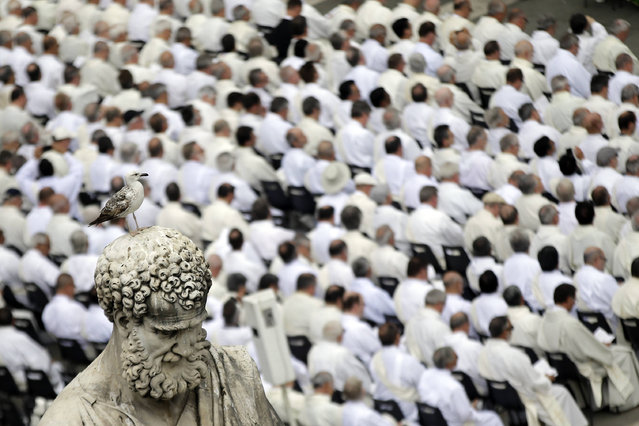 A seagull sits on the statue of St. Peter which towers over deacons attending a Mass lead by Pope Francis for the Jubilee, Holy Year, of Deacons, in St. Peter's Square at the Vatican, Sunday, May 29, 2016. (Photo by Gregorio Borgia/AP Photo)
Edit Del
30 May 2016 09:03:00, post received 0 comments
Publication archive:
←   →
Popular tags:
All tags
Last searches: