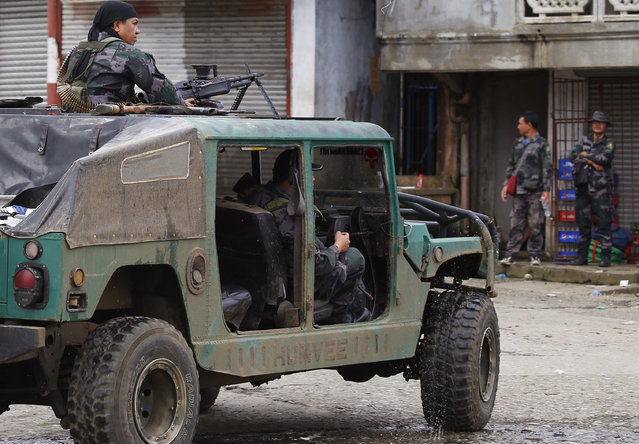 Police patrol the streets of Marawi city as government troops battle with Muslim militants who continue to hold their ground in some areas of the city for almost a week Monday, May 29, 2017 in southern Philippines. Philippine forces control most of the southern city where militants linked to the Islamic State group launched a bloody siege nearly a week ago, authorities said Monday, as the army launched airstrikes and went house-to-house to crush areas of resistance. (Photo by Bullit Marquez/AP Photo) 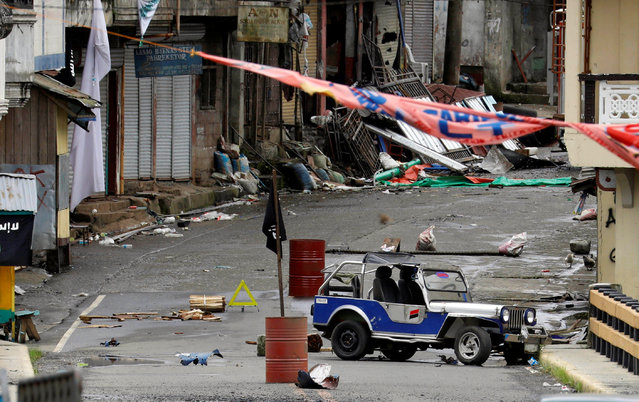 A view of the Maute group stronghold with an ISIS flag in Marawi City in southern Philippines May 29, 2017. (Photo by Erik De Castro/Reuters) 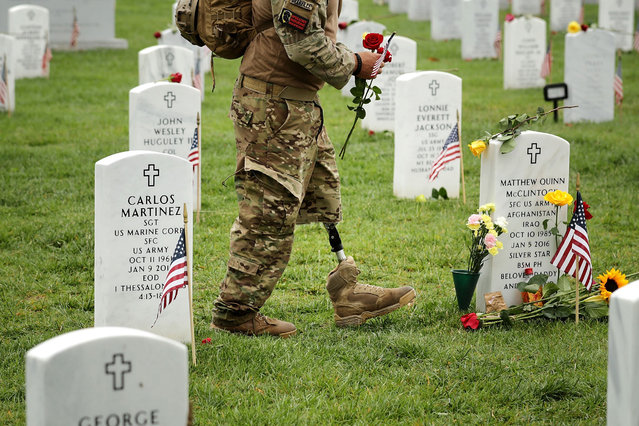 Earl Granville walks through Section 60 at Arlington National Cemetery on Memorial Day on May 29, 2017 in Arlington. A member of the Pennsylvania National Guard, Granville was deployed to Afghanistan with the 1/109th Infantry Regiment in December 2007 whe he lost his left leg to a roadside bomb. Granville now works with Operation Enduring Warrior and participated in the final 10 miles of the Ruck to Remember, a 60 mile hike from Harpers Ferry to the cemetery. (Photo by Chip Somodevilla/Getty Images) 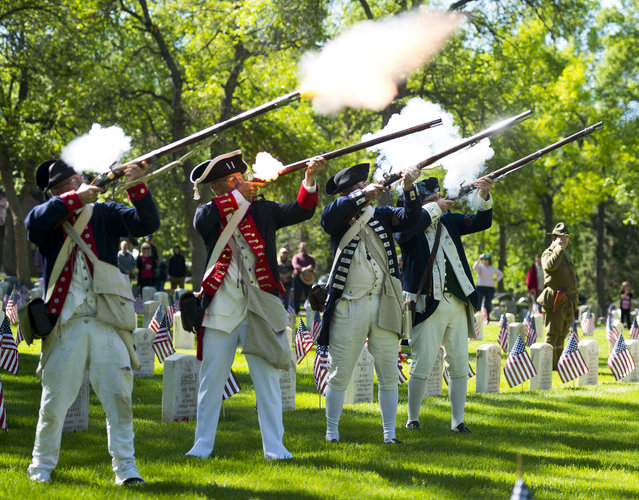 The Sons of the American Revolution, Pikes Peak Chapter fire their guns during a historic reenactment on Memorial Day at the Evergreen Cemetery on May 29, 2017 in Colorado Springs. (Photo by Dougal Brownlie/AP Photo/The Gazette) 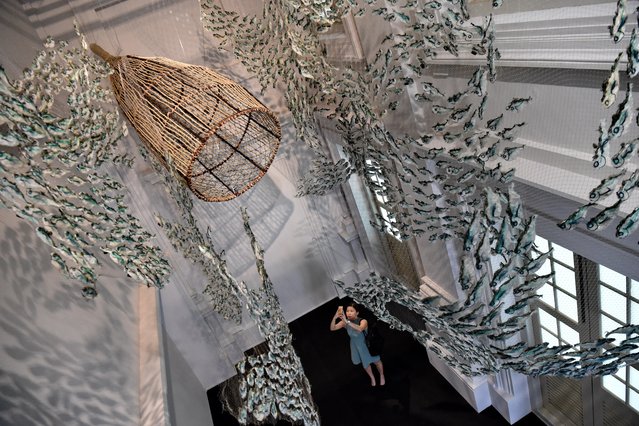 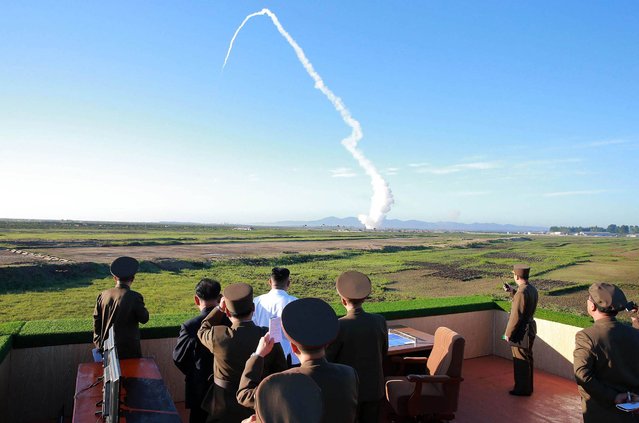 This undated picture released from North Korea's official Korean Central News Agency (KCNA) on May 28, 2017 shows North Korean leader Kim Jong-Un (C-in white shirt) watching the test of a new anti-aircraft guided weapon system organized by the Academy of National Defence Science at an undisclosed location. North Korean leader Kim Jong-Un has overseen a test of a new anti-aircraft weapon system, state media said on May 28, amid mounting tensions in the region following a series of missile tests by Pyongyang. (Photo by AFP Photo/KCNA via KNS) 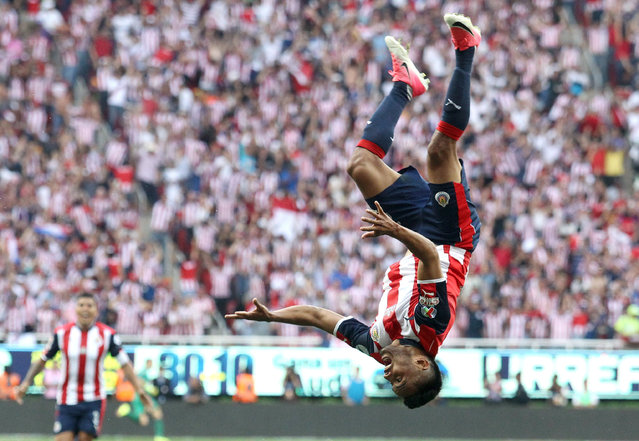 Chivas' Jose Juan Vazquez celebrates after scoring against Tigres during the final match of the Torneo Clausura at Chivas Stadium in Guadalajara, Mexico, 28 May 2017. (Photo by Ulises Ruiz Basurto/EPA) 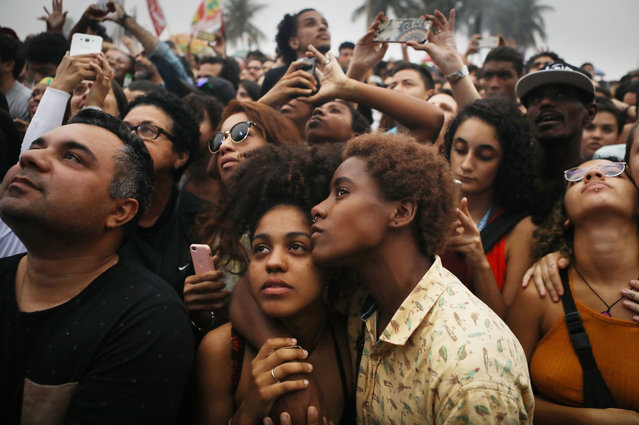 Protestors gather at a demonstration and concert calling for direct presidential elections on May 28, 2017 in Rio de Janeiro, Brazil. President Michel Temer is enmired in allegations of endorsing bribery in a scandal which threatens to bring down his brief presidency. (Photo by Mario Tama/Getty Images) 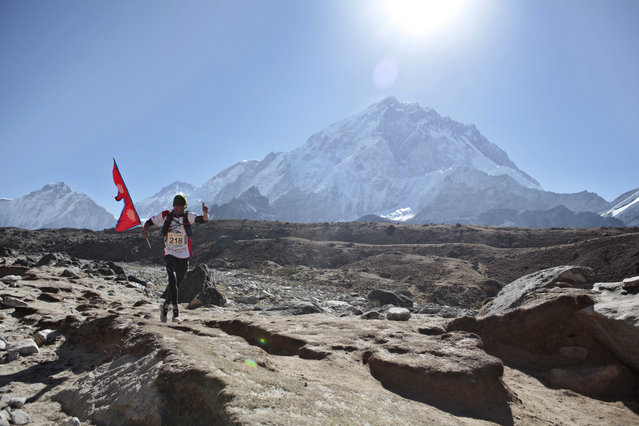 A Nepalese runs with his national flag during a marathon to mark the first conquest of Mount Everest, at Lobuche, near Everest base camp, Nepal, Monday, May 29, 2017. Nepal's mountaineering community is celebrating the first conquest of Everest and a successful climbing season in which hundreds of climbers scaled the world's highest peak. Monday is the 64th anniversary of the first successful climb of Everest by New Zealander Edmund Hillary and his Sherpa guide Tenzing Norgay. (Photo by Tashi Sherpa/AP Photo) 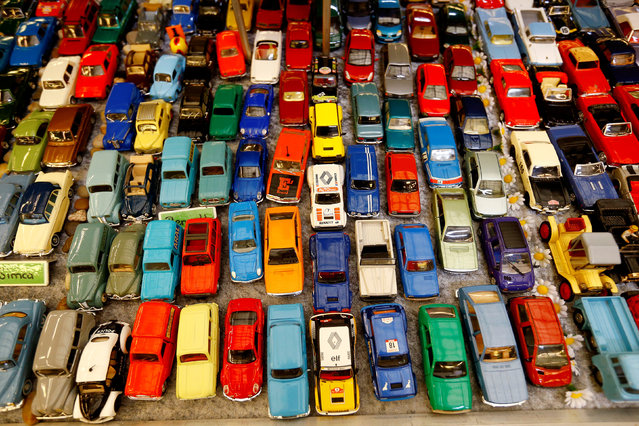 Scale models of various types of cars are offered at the Swiss Classic Car vintage automobile fair in Luzern, Switzerland on May 28, 2017. (Photo by Arnd Wiegmann/Reuters) 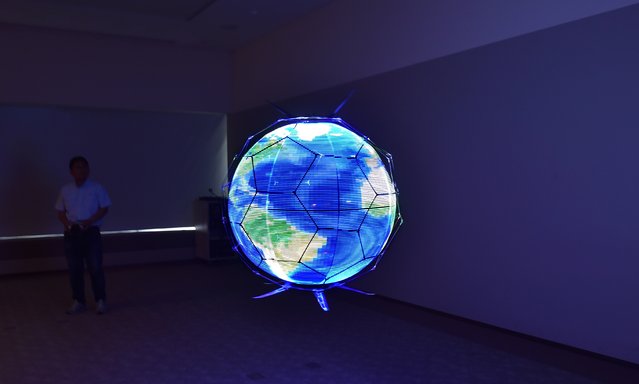 Japan's NTT DOCOMO demonstrates a spherical drone display, an unmanned aerial vehicle that displays LED images on an omnidirectional spherical screen while in flight, at the company's research laboratories in Yokosuka, Kanagawa prefecture on May 29, 2017. The highly maneuverable drone can be operated virtually anywhere, including venues such as concert halls or arenas where it can fly around as part of a performance or deliver advertising messages, event information, etc. (Photo by Kazuhiro Nogi/AFP Photo) 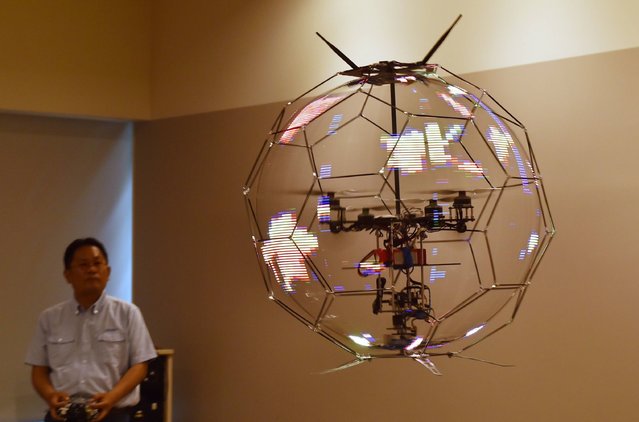 Japan's NTT DOCOMO demonstrates a spherical drone display, an unmanned aerial vehicle that displays LED images on an omnidirectional spherical screen while in flight, at the company's research laboratories in Yokosuka, Kanagawa prefecture on May 29, 2017. (Photo by Kazuhiro Nogi/AFP Photo) 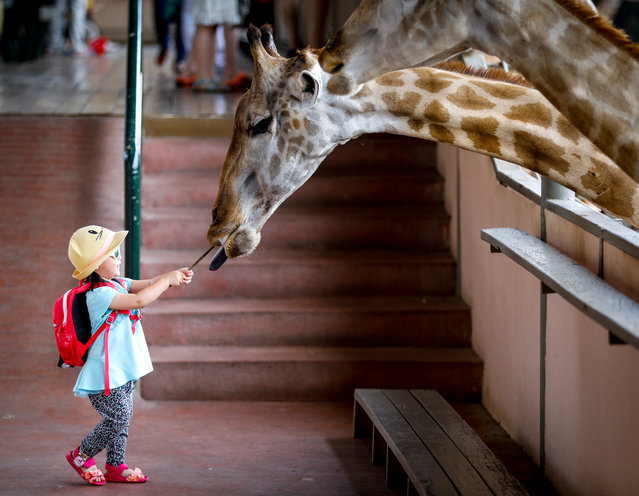 A young girl feeds a banana to a giraffe on the giraffe feeding platform at the wildlife park Safari World in Minburi district, Bangkok, Thailand, 27 May 2017 (issued 29 May 2017). The Giraffes feeding platform is one of the park's most popular attractions where visitors can buy a bucket of bananas for 100 Thai baht (around 2.7 Euros) and feed the giraffes. According to park statements, the herd of giraffes is the world's largest in captivity. (Photo by Diego Azubel/EPA) 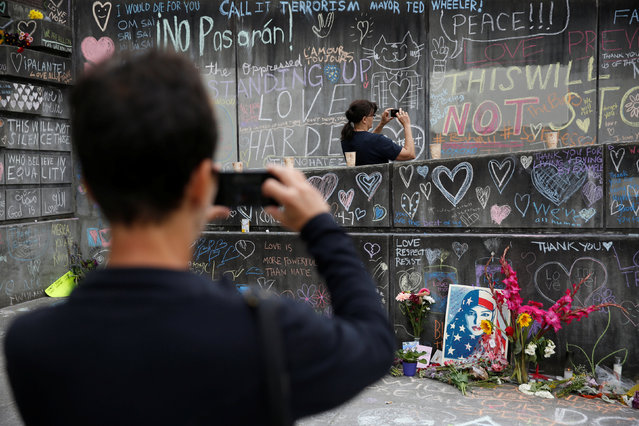 People take photos at a makeshift memorial for two men who were killed on a commuter train while trying to stop another man from harassing two young women who appeared to be Muslim, in Portland, Oregon, U.S. May 29, 2017. (Photo by Terray Sylvester/Reuters) 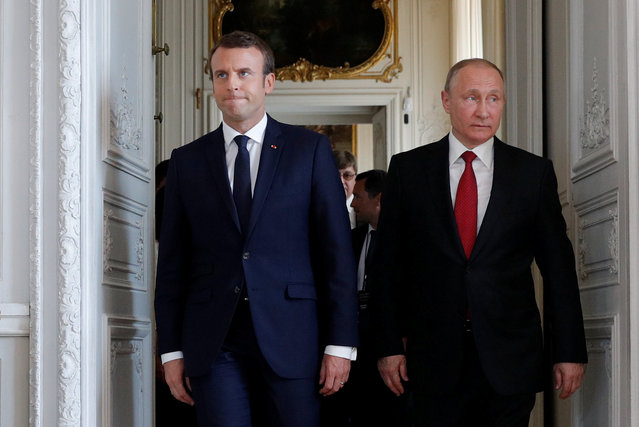 French President Emmanuel Macron (L) walks with Russian President Vladimir Putin at the Chateau de Versailles as they meet for talks before the opening of an exhibition marking 300 years of diplomatic ties between the two countries in Versailles, France, May 29, 2017. (Photo by Philippe Wojazer/Reuters) 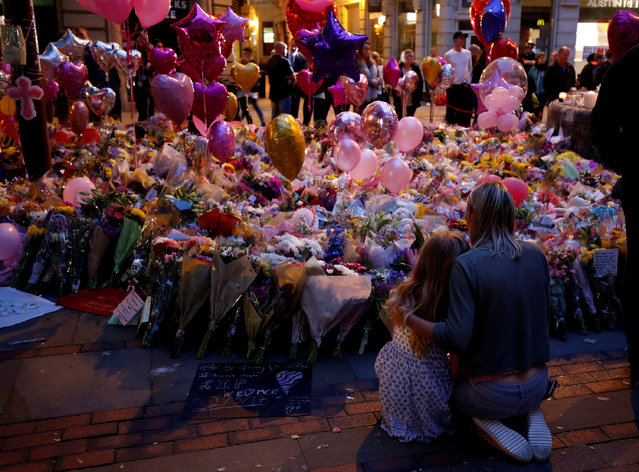 People attend a vigil for the victims of last week's attack at a pop concert at Manchester Arena, in central Manchester, Britain May 29, 2017. (Photo by Andrew Yates/Reuters) 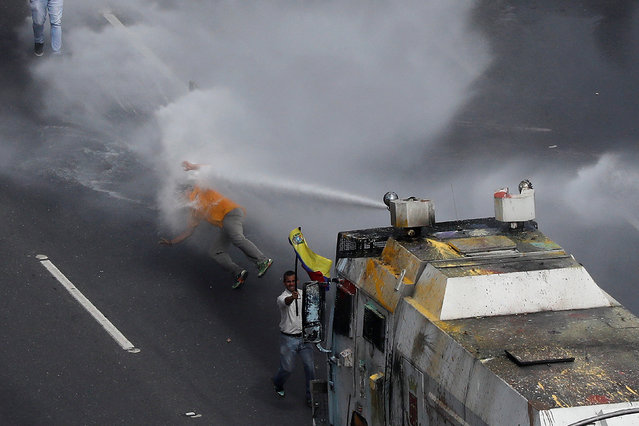 Deputy of the opposition Carlos Paparoni is hit by jets of water during riots at a march to the state Ombudsman's office in Caracas, Venezuela May 29, 2017. (Photo by Carlos Garcia Rawlins/Reuters) 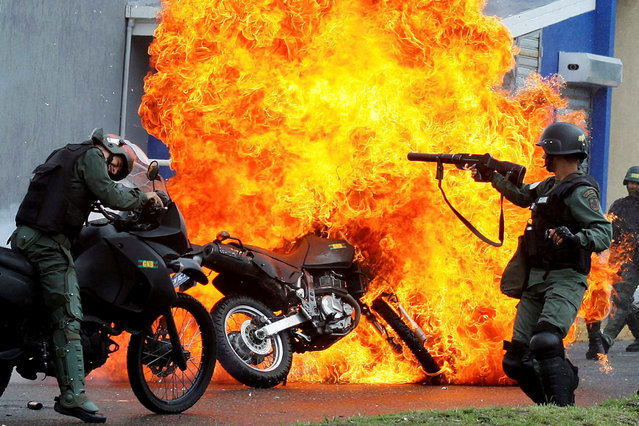 Riot security forces clash with demonstrators as a motorcycle is set on fire during a protest against Venezuelan President Nicolas Maduro's government in San Cristobal, Venezuela May 29, 2017. (Photo by Carlos Eduardo Ramirez/Reuters) 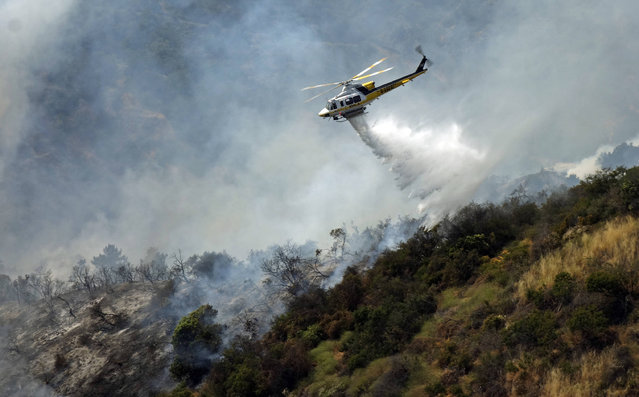 A helicopter makes a water drop on a hillside after a wildfire broke out in the Brentwood area of Los Angeles, Sunday, May 28, 2017. A dark plume of smoke was visible for miles as the fire consumed moderate to thick brush near Mandeville Canyon Road, a dead end road that snakes up a deep canyon lined by expensive view homes. A few residents voluntarily left but no homes were damaged. (Photo by Brian Melley/AP Photo) 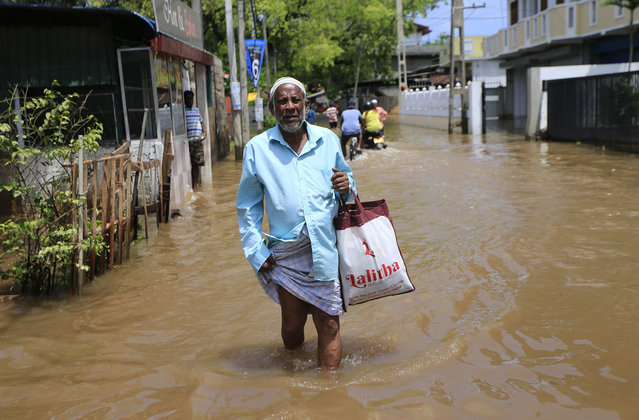 A Sri Lankan man wades through a flooded street in Colombo, Sri Lanka, Sunday, May 28, 2017. Sri Lankan rescuers pulled out more bodies under enormous mudslides on Sunday as the death toll climbed to 146 with 112 others missing. (Photo by Eranga Jayawardena/AP Photo) 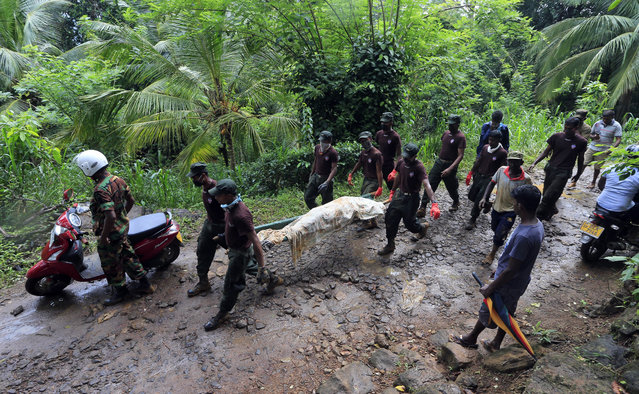 Sri Lankan army soldiers carry the body of a victim of a mudslide in Kiribathgala village in Ratnapura district, Sri Lanka, Monday, May 29, 2017. Kiribathgala Hill known for its gems and precious stones came crashing down last Thursday covering eight houses with their 18 inhabitants. Soldiers have recovered more than a dozen dead bodies on Monday. (Photo by Eranga Jayawardena/AP Photo) 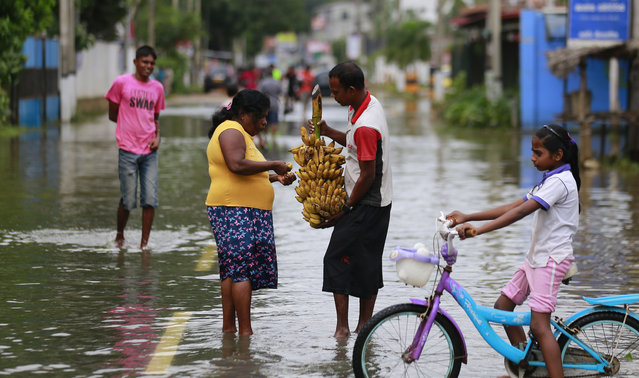 A Sri Lankan man offers bananas to a women in a flooded street in Colombo, Sri Lanka, Sunday, May 28, 2017. (Photo by Eranga Jayawardena/AP Photo) 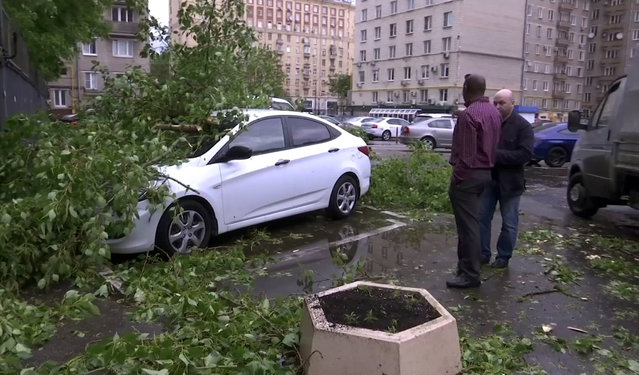 In this grab taken from video, men stand near to a vehicle crushed by branches from a fallen tree, in a residential area of Moscow, Russia, Monday, May 29, 2017. Thunderstorms and strong winds buffeted Moscow and its surrounding areas on Monday, killing 11 people and injuring dozens, Russian officials said.﻿﻿ ﻿(Photo by AP Photo) 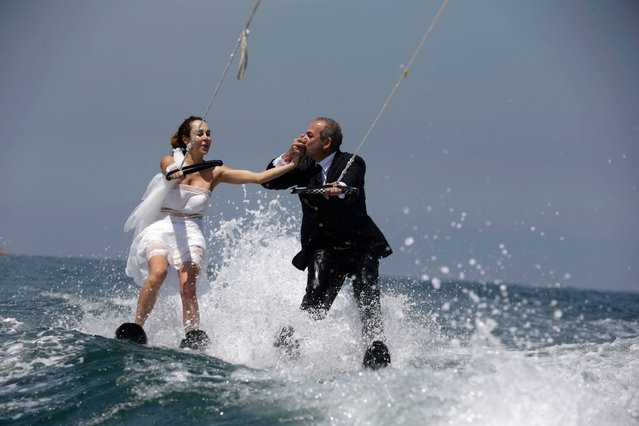 Lebanese groom Tommy kisses the hand of his bride Nadine's while water skiing dressed in their wedding clothes in the waters off the bay of Jounieh, north of Beirut, on May 29, 2017. Tommy and Nadine got married in a civil wedding in Cyprus last week before celebrating in Lebanon. (Photo by Patrick Baz/AFP Photo)
Edit Del
30 May 2017 08:43:00, post received 0 comments
Publication archive:
←   →
Popular tags:
All tags
Last searches: