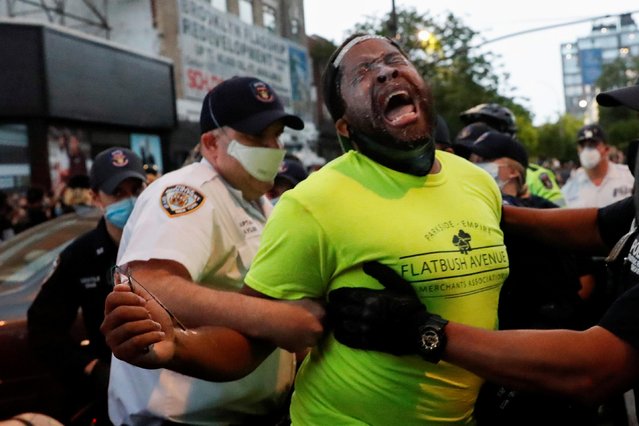 Police officers detain a man during an “I can't breathe” vigil and rally in the Brooklyn borough of New York, NY, U.S., following the death of African-American George Floyd who was seen in graphic video footage gasping for breath as a white officer knelt on his neck in Minneapolis, Minnesota, May 29, 2020. (Photo by Shannon Stapleton/Reuters) 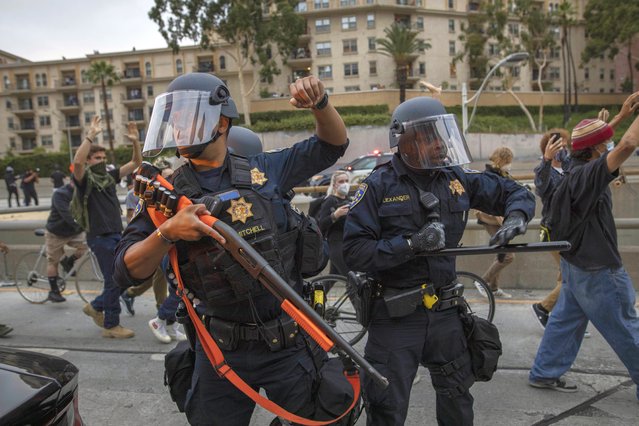 Police officers hold their position as protesters march by in Los Angeles, Friday, May 29, 2020, in protest over the death of George Floyd, who died in police custody on Memorial Day in Minneapolis. (Photo by Christian Monterrosa/AP Photo) 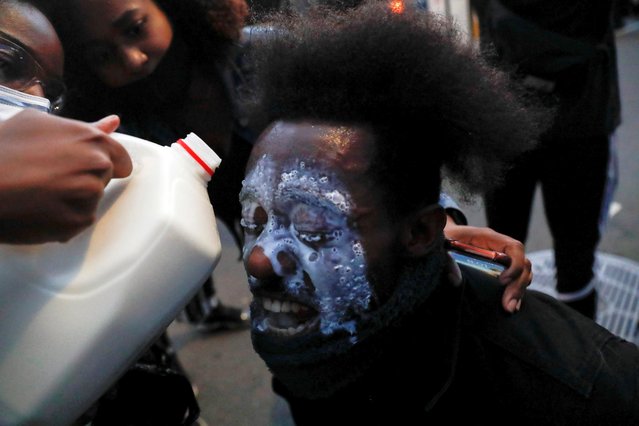 Protesters help a man whose eyes are affected by tear gas during an “I can't breathe” vigil and rally in the Brooklyn borough of New York, NY, U.S., following the death of African-American George Floyd who was seen in graphic video footage gasping for breath as a white officer knelt on his neck in Minneapolis, Minnesota, May 29, 2020. (Photo by Shannon Stapleton/Reuters) 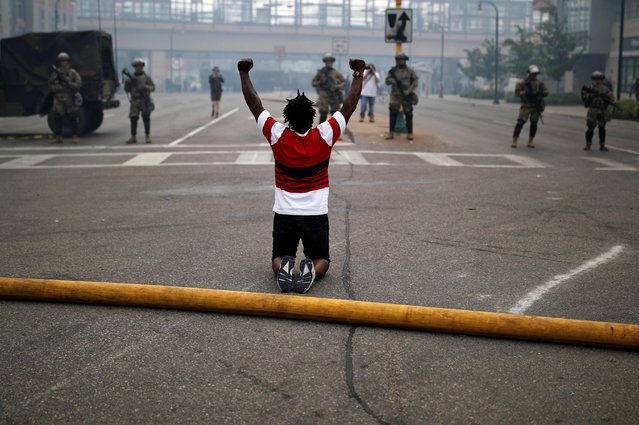 A man reacts as he confronts National Guard members guarding the area in the aftermath of a protest after a white police officer was caught on a bystander's video pressing his knee into the neck of African-American man George Floyd, who later died at a hospital, in Minneapolis, Minnesota, May 29, 2020. (Photo by Carlos Barria/Reuters) 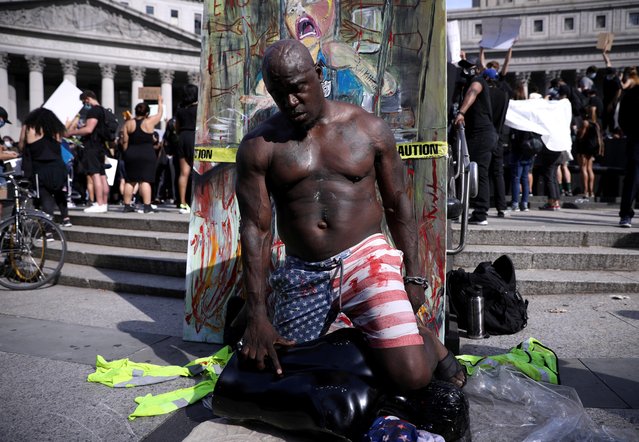 A protester performs during “I can't breathe” vigil and rally against the death in Minneapolis police custody of African-American man George Floyd, in New York, U.S. May 29, 2020. (Photo by Caitlin Ochs/Reuters) 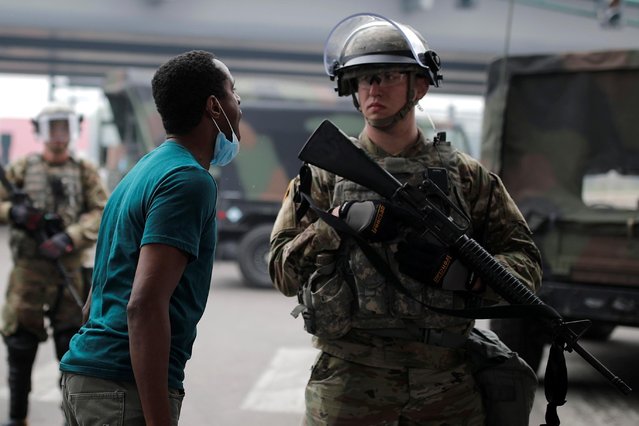 A man confronts a National Guard member as they guard the area in the aftermath of a protest against the death in Minneapolis police custody of African-American man George Floyd, in Minneapolis, Minnesota, U.S., May 29, 2020. (Photo by Carlos Barria/Reuters) 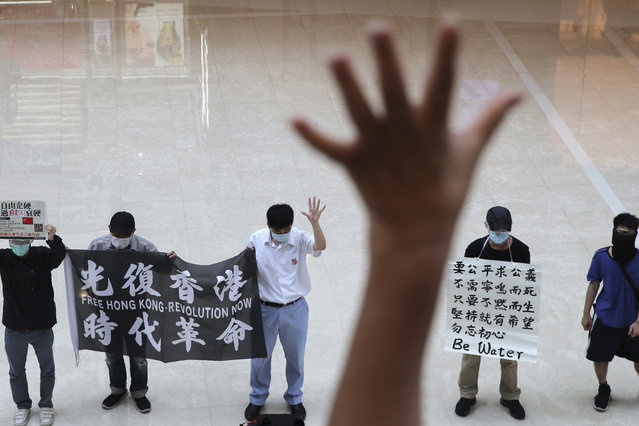 Protesters gesture with five fingers, signifying the “Five demands – not one less” in a shopping mall during a protest against China's national security legislation for the city, in Hong Kong, Friday, May 29, 2020. The British government says t it will grant hundreds of thousands of Hong Kong residents greater visa rights if China doesn't scrap a planned new security law for the semi-autonomous territory. U.K. Foreign Secretary Dominic Raab said about 300,000 people in Hong Kong who hold British National (Overseas) passports will be able to stay in Britain for 12 months rather than the current six. (Photo by Kin Cheung/AP Photo) 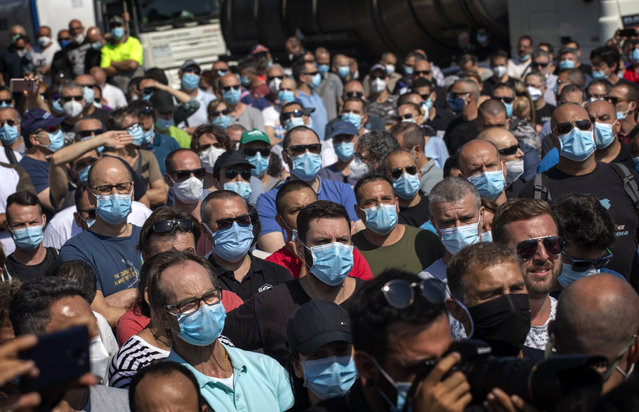 Nissan workers gather during a protest in front of the Nissan factory in Barcelona, Spain, Thursday, May 28, 2020. Japanese carmaker Nissan Motor Co. has decided to close its manufacturing plans in the northeastern Catalonia region, resulting in the loss of some 3,000 direct jobs. (Photo by Emilio Morenatti/AP Photo) 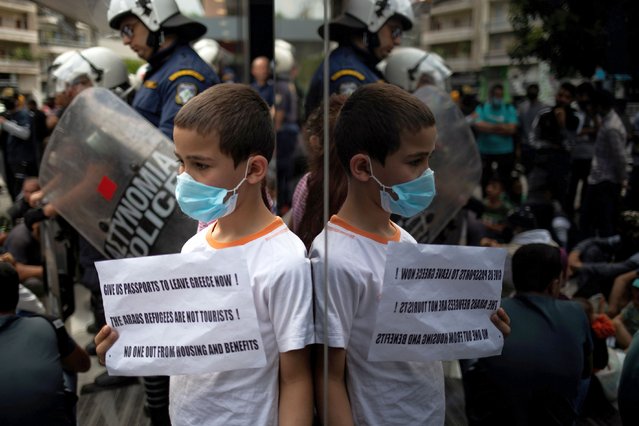 A boy wears a face mask as protection from the spread of the coronavirus disease (COVID-19) while refugees protest outside the UNHCR offices against a government decision that they should leave their accommodation provided through European Union and UNHCR funds by the end of May, in Athens, Greece, May 29, 2020. (Photo by Alkis Konstantinidis/Reuters) 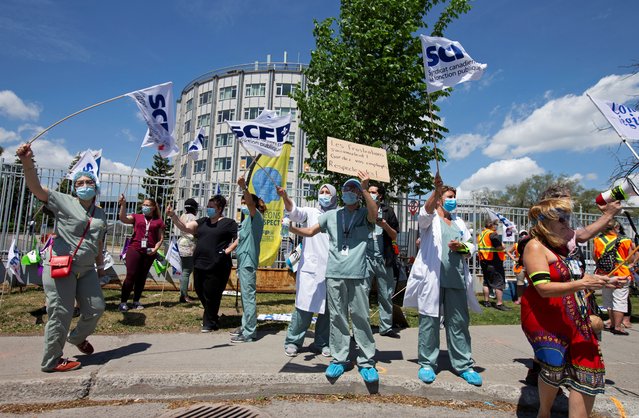 Health care workers, professionals and unions demanding safer working conditions and time off amid the coronavirus disease (COVID-19) outbreak, protest in front of Santa Cabrini Hospital in Montreal, Quebec, Canada on May 29, 2020. (Photo by Christinne Muschi/Reuters) 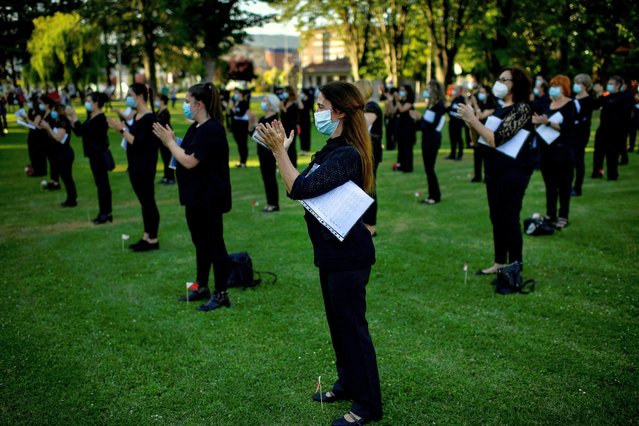 Members of chorus known as “Orfeon Pamplones” wear face mask protections against the coronavirus while applauding in support for health public services as a tribute outside of Navarra Hospital, in Pamplona, northern Spain, Friday, May 29, 2020. (Photo by Alvaro Barrientos/AP Photo) 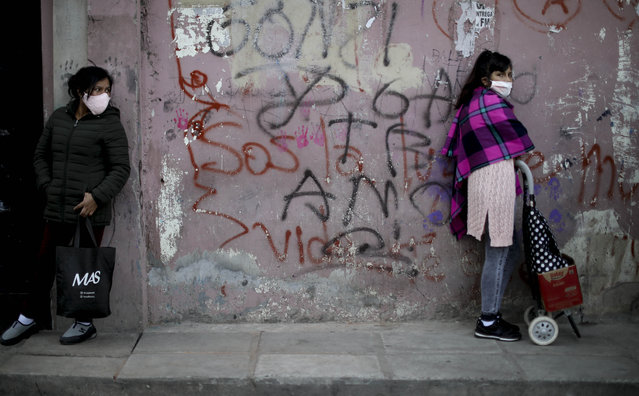 Women stand at a distance as they wait in line for a plate of food at a soup kitchen in the 1.11.14 neighborhood during a government-ordered lockdown to curb the spread of the coronavirus in Buenos Aires, Argentina, Friday, May 29, 2020. (Photo by atacha Pisarenko/AP Photo/) 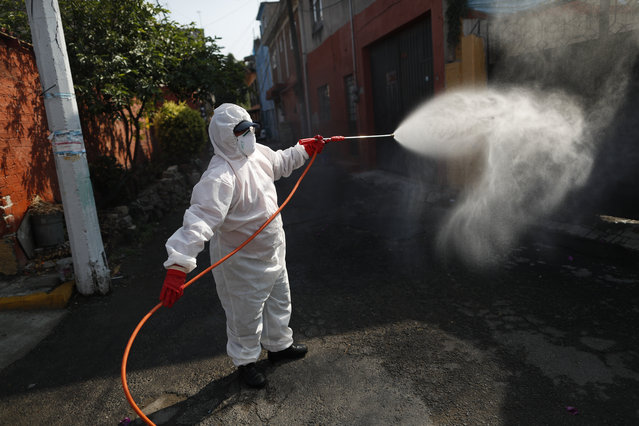 A public safety worker sprays a disinfectant solution in the streets of the El Rosario neighborhood, which had seen a recent cluster of COVID-19 cases, in Xochimilco, Mexico City, Mexico, Friday, May 29, 2020. (Photo by Rebecca Blackwell/AP Photo) 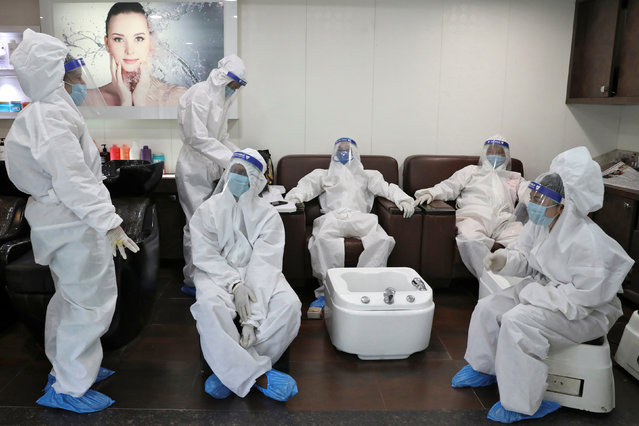 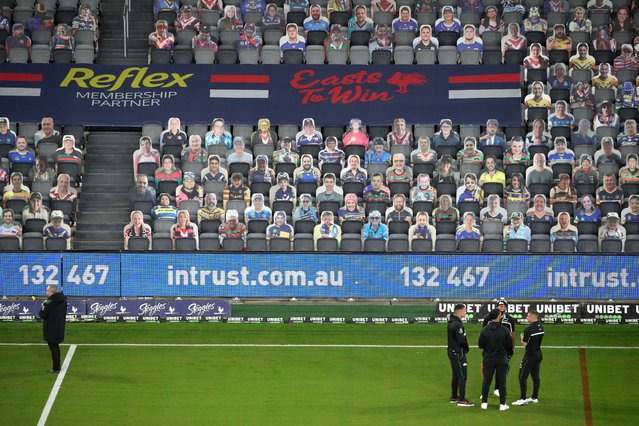 Cardboard dummies fill the stands before a National Rugby League (NRL) match without fans between the South Sydney Rabbitohs and Sydney Roosters, as the 2020 season resumes following the coronavirus disease (COVID-19) outbreak, at Bankwest Stadium in Sydney, Australia, May 29, 2020. (Photo by Loren Elliott/Reuters) 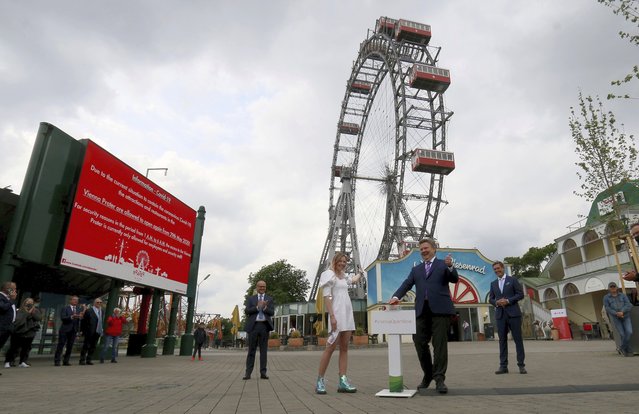 The Mayor of Vienna Michael Ludwig, center, presses a button to restarts the giant Ferris Wheel to symbolically signal the resumption of tourism in Austria in Vienna, Austria, Friday, May 29, 2020. Amusements are open again in Austria as part of relaxing the restrictions to slow the coronavirus and the COVID-19 disease. (Photo by Ronald Zak/AP Photo) 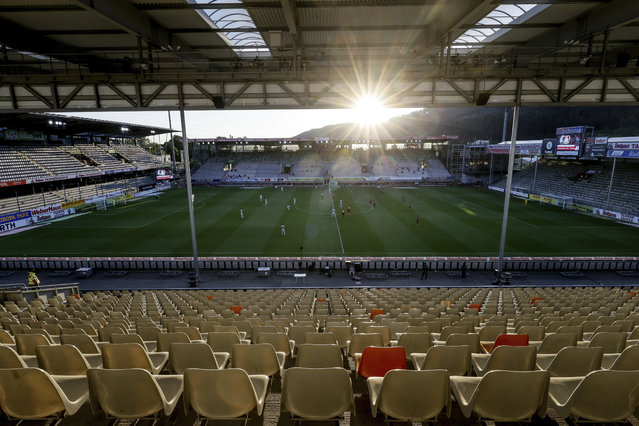 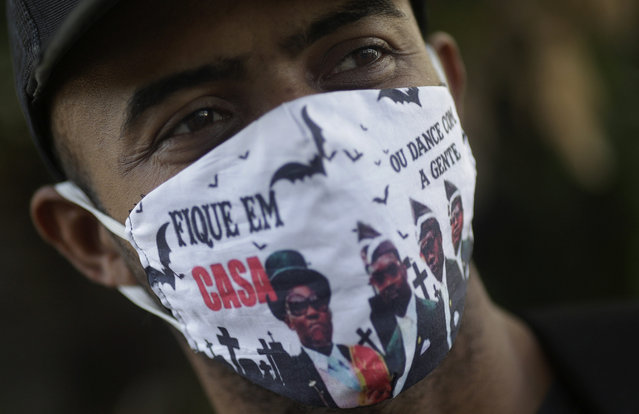 A man wears a protective face mask with a picture of the Ghana's dancing pallbearers, that reads “Stay at home, or dance with us” as he waits outside a public bank, where most of people try to receive emergency aid given by the federal government to the most vulnerable, during the coronavirus disease (COVID-19) outbreak, in Rio de Janeiro, Brazil, May 29, 2020. (Photo by Ricardo Moraes/Reuters) 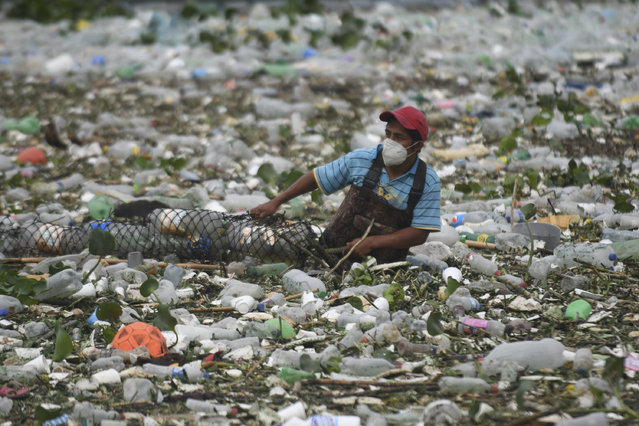 A worker of the Lake Amatitlan Authority (AMSA) collects garbage washed away by rains and held by a floating barrier installed in one of the tributaries of the Lake in Amatitlan, 30 kms south of Guatemala City, on May 29, 2020, amid the Covid-19 coronavirus pandemic. (Photo by Johan Ordonez/AFP Photo) 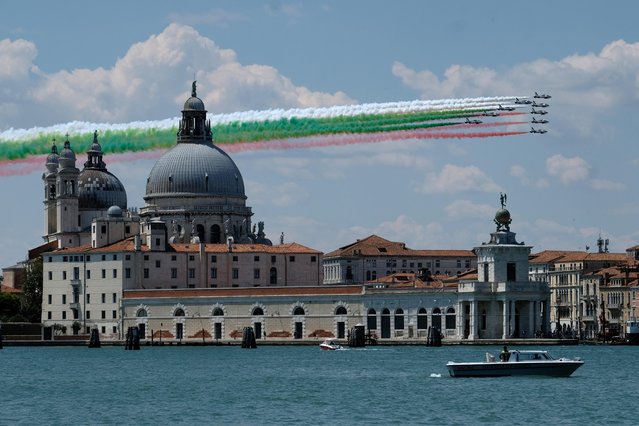 The aerobatic demonstration team of the Italian Air Force, the Frecce Tricolori (“Tricolor Arrows”), fly over the Basilica of Saint Mary of Health as they perform as part of a nationwide tour to show unity and solidarity following the outbreak of the coronavirus disease (COVID-19), in Venice, Italy, May 29, 2020. (Photo by Manuel Silvestri/Reuters)
Edit Del
31 May 2020 00:07:00, post received 0 comments
Publication archive:
←   →
Popular tags:
All tags
Last searches: