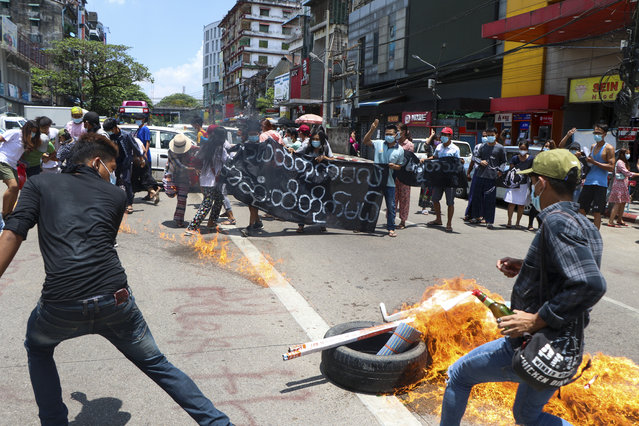 Anti-coup protesters burn tires and chant slogans with banner read '“The Kamayut strike will be fight for to the end when we get victory” during the demonstration against the military coup in Kamayut township Yangon, Monday, May 3, 2021. (Photo by AP Photo/Stringer) 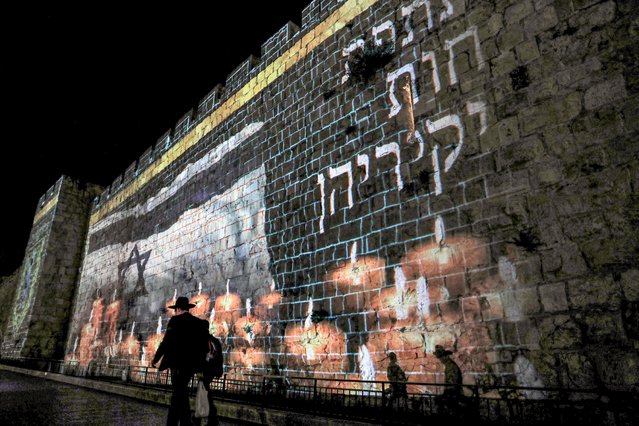 A projection of an Israeli flag flying before lit candles is displayed on the old city walls of Jerusalem on May 2, 2021, as Israel declares a national day of mourning for victims of a stampede during the Lag BaOmer holiday at Mount Meron. The deadly crush at Mount Meron in northern Israel has been described as one of the worst peacetime disasters since the nation's founding in 1948. The stampede broke out as tens of thousands of mostly ultra-Orthodox Jews thronged the reputed tomb of Rabbi Shimon Bar Yochai to commemorate the second-century Talmudic sage's death and mark Lag BaOmer holidays. (Photo by Ahmad Gharabli/AFP Photo) 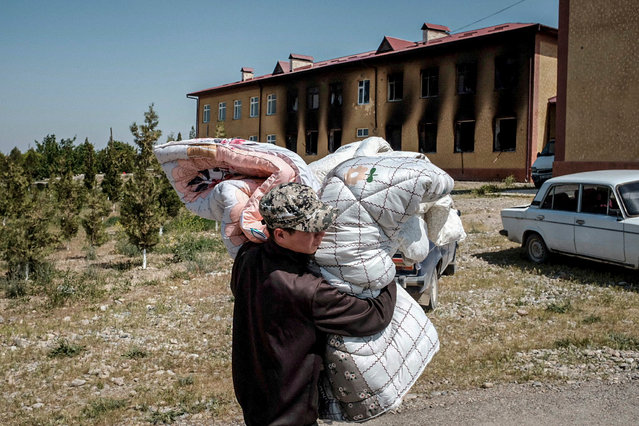 A Kyrgyz man carries belongings in the village of Maksat, near the border with Tajikistan on May 2, 2021. Kyrgyzstan's leader Sadyr Japarov called citizens to respect a peace deal signed with Tajikistan after the pair's heaviest border clashes left at least 34 Kyrgyz citizens dead and said a ceasefire with Tajikistan was holding on May 2, as it accused citizens from its Central Asian neighbour of crimes during the pair's worst clashes at their contested border in decades. The Kyrgyz interior ministry said that casualties on its side had risen to over 160 with 34 deaths, 31 of whom were civilians. (Photo by Danil Usmanov/AFP Photo) 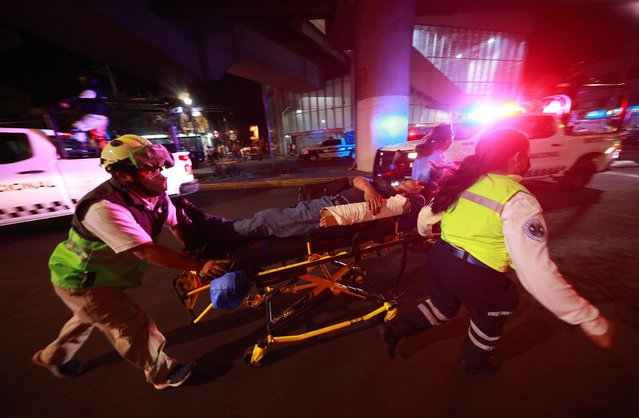 The injured are carried by stretcher after a raised subway track collapsed on May 03, 2021 in Mexico City, Mexico. The Line 12 accident happened between Olivos and Tezonco Metro stations. At least 15 people were killed and dozens injured as an elevated metro line collapsed in the Mexican capital on May 3 as a train was passing, authorities said. (Photo by Hector Vivas/Getty Images) 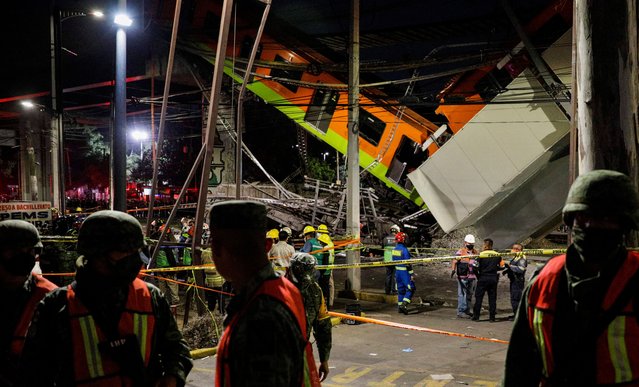 Rescuers work at a site where an overpass for a metro partially collapsed with train cars on it at Olivos station in Mexico City, Mexico, early May 4, 2021. (Photo by Luis Cortes/Reuters) 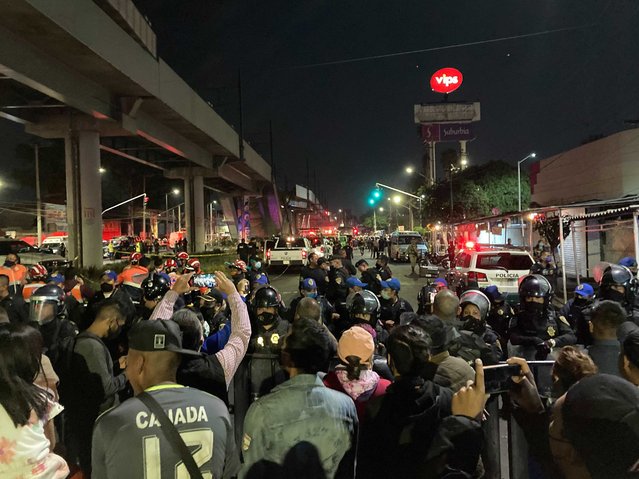 Media stand at a police barricade barring access to the scene of a subway car that fell after a section of Line 12 of the subway collapsed in Mexico City, Wednesday, May 4, 2021. The section passing over a road in southern Mexico City collapsed Monday night, dropping a subway train, trapping cars and causing at least 50 injuries, authorities said. (Photo by Eduardo Castillo/AP Photo) 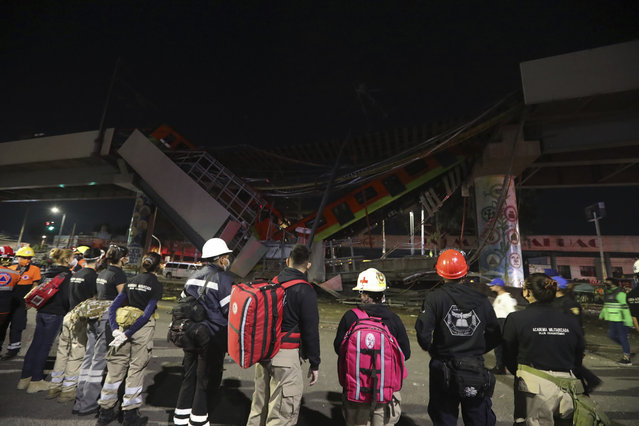 Rescue personnel stand in front of Mexico City subway cars laying at an angle after a section of Line 12 of the subway collapsed in Mexico City, Tuesday, May 4, 2021. (Photo by Marco Ugarte/AP Photo) 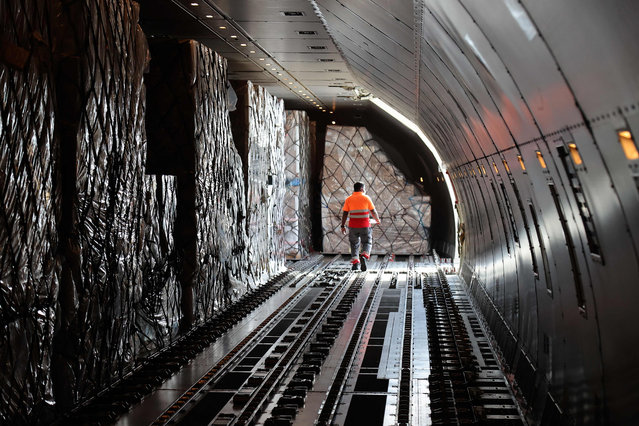 Workers load 300 tonnes of medical aid to be flown in a three-flight cargo aircraft convoy directly to destinations in India, at Qatar's Hamad International Airport in the capital Doha on May 3, 2021. India's total COVID-19 caseload neared 20 million as oxygen shortages in hospitals exacerbated a devastating second wave, and much-needed foreign assistance continued to pour in. (Photo by Karim Jaafar/AFP Photo) 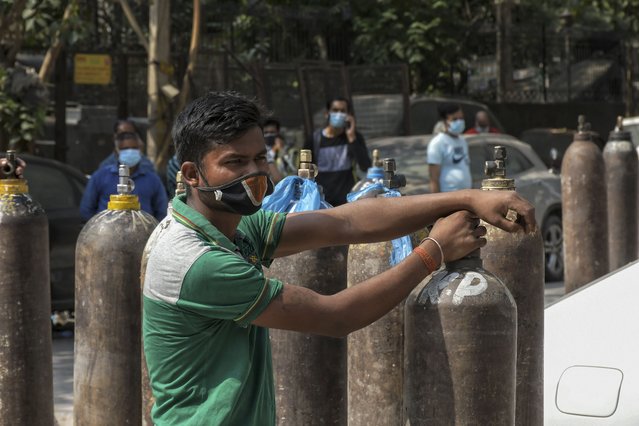 Family members of COVID-19 patients wait in queue to refill their oxygen cylinders at Mayapuri area in New Delhi, India, Monday, May 3, 2021. Indian hospitals are struggling to secure a steady supply of oxygen, and more COVID-19 patients are dying amid the shortages. (Photo by Ishant Chauhan/AP Photo) 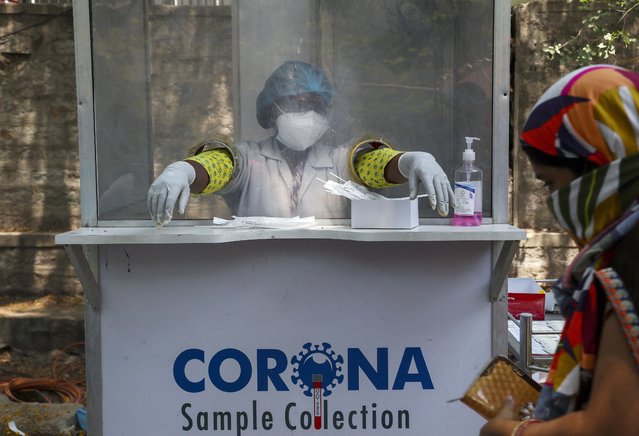 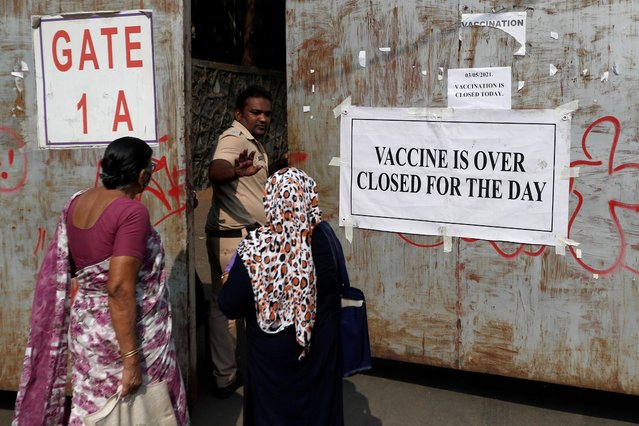 A policeman asks people who came to receive a dose of a coronavirus vaccine to leave as they stand outside the gate of a vaccination centre which was closed due to a lack of supply of the COVID-19 vaccine, in Mumbai, India, May 3, 2021. (Photo by Francis Mascarenhas/Reuters) Visitors wearing masks to prevent the spread of coronavirus walks inside the Vatican Museum after it reopened, in Rome, Monday, May 3, 2021. The Vatican Museums reopened Monday to visitors after a shutdown following COVID-19 containment measures. (Photo by Alessandra Tarantino/AP Photo) 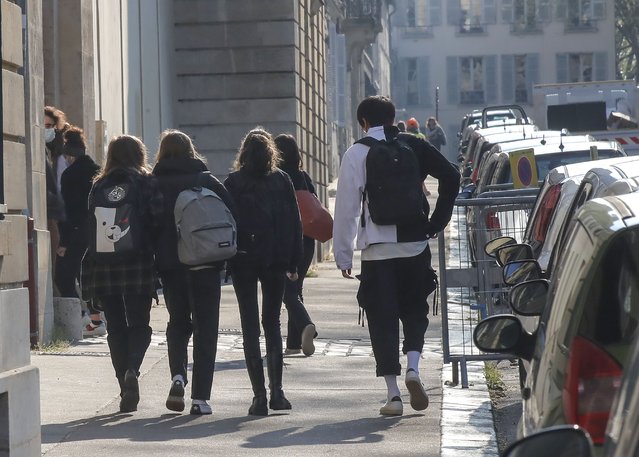 Students arrive at school in Versailles, west of Paris, Modnay, May 3, 2021. Students go back to secondary and high schools and a domestic travel ban will end. The French government is slowly starting to lift partial lockdowns, despite still high numbers of coronavirus cases and hospitalized COVID-19 patients. (Photo by Michel Euler/AP Photo) 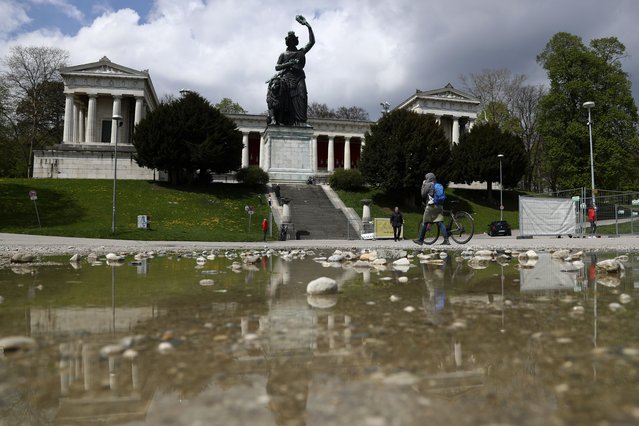 People walk in the Theresienwiese' area where the “Oktoberfest” beer festival is held, in front of the Bavaria statue, in Munich, Germany, Monday, May 3, 2021. The world's largest beer festival “Oktoberfest” was cancelled last year due to the coronavirus outbreak. (Photo by Matthias Schrader/AP Photo) 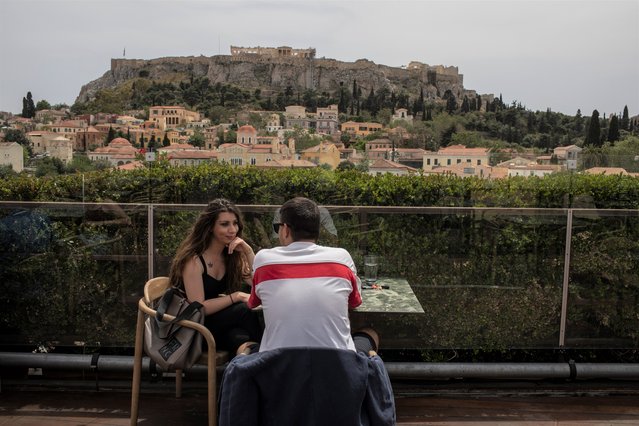 A man and a woman drink coffee in the Monastiraki district of Athens,with the ancient Acropolis hill in the background, Monday, May 3, 2021. Cafes and restaurants have reopened in Greece for sit-down service for the first time in nearly six months, as the country began easing coronavirus-related restrictions with a view to opening to the vital tourism industry in the summer. (Photo by Petros Giannakouris/AP Photo) 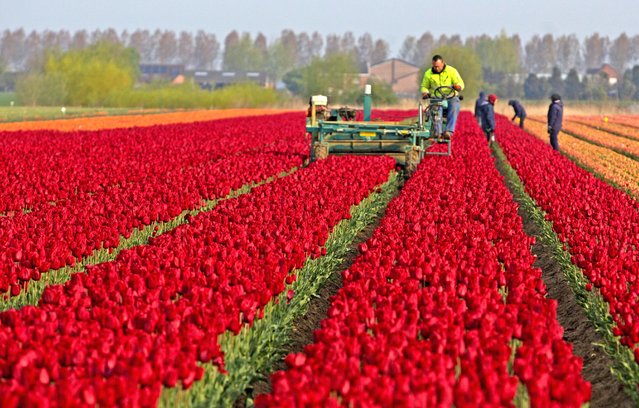 Farmers work in a tulip field in Meerdonk, Belgium on Monday, May 3, 2021. Most tulips in the region are grown specifically for the bulbs and not the flowers, however the flowers remain in the fields until fully blossomed before being cut down. (Photo by Virginia Mayo/AP Photo) 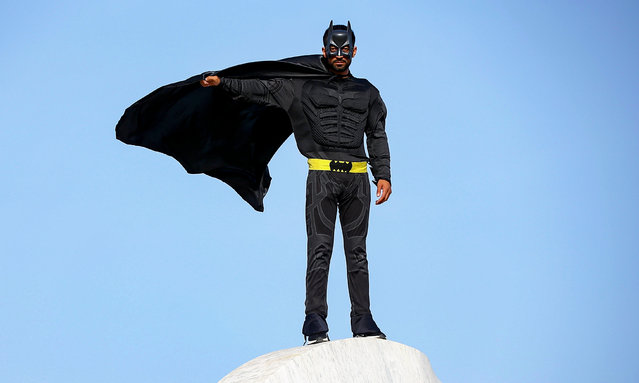 27-year-old taxi driver Omer Efe Tektas, wearing “Batman” costume, is seen in Mersin, Turkey on May 02, 2021. Tektas wanted to help his customers amid the novel type of the coronavirus (COVID-19) pandemic process and he starts to deliver the grocery shopping of the senior people who cannot leave their homes during the pandemic also gives presents to children. (Photo by Sezgin Pancar/Anadolu Agency via Getty Images) 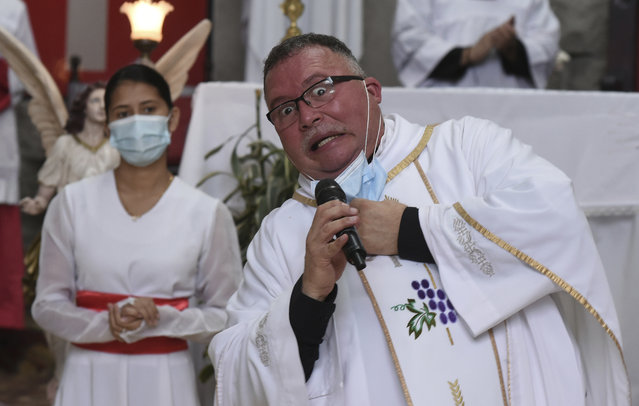 Sergio Valverde Espinoza, a Catholic priest of the Cristo Rey church who modified a popular song called “Sopa de Caracol”, or Snail Soup in English, gestures during a Mass in San Jose, Costa Rica, Sunday, May 2, 2021. Valverde changed the song's lyrics to a message calling for the use of face masks and care during the pandemic. (Photo by Carlos Gonzalez/AP Photo) 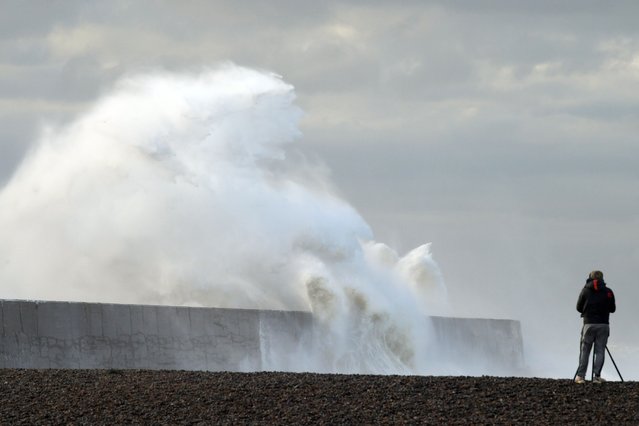