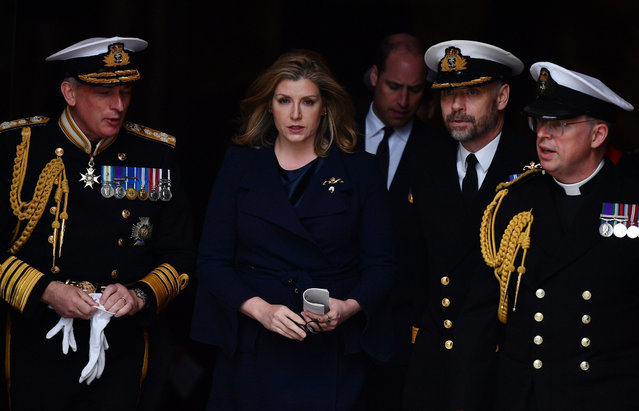 Britain's Defence minister Penny Mordaunt leaves Westminster Abbey after attending a service to recognise fifty years of continuous at sea deterrent in London on May 3, 2019. (Photo by Daniel Leal-Olivas/AFP Photo) 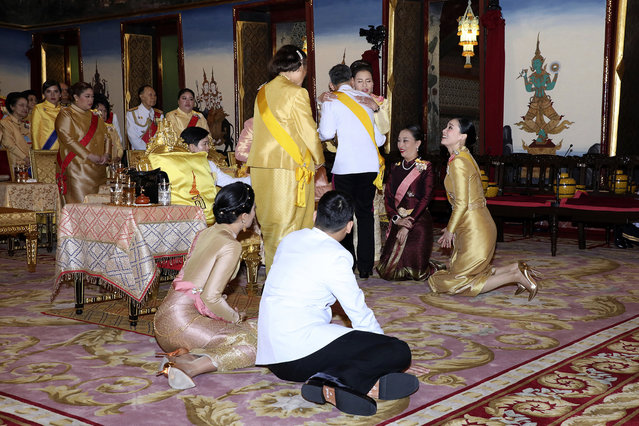 In this Friday, May 3, 2019, photo released by Bureau of the Royal Household, Thailand's King Maha Vajiralongkorn, center, hugs his sister Princess Ubolratana, with Royal family and Queen Suthida, sitting at right, before make the religious ceremony at Grand Palace in Bangkok, Thailand. The coronation ceremony for 66-year-old King Maha Vajiralongkorn, also known as King Rama X, will be held on May 4-6, 2019. (Photo by Bureau of the Royal Household via AP Photo) 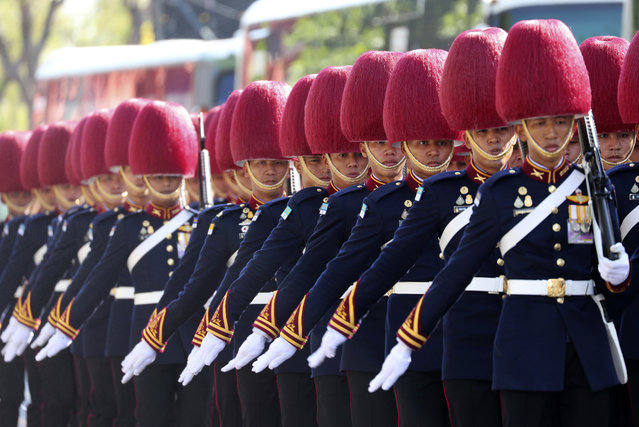 The royal guard walk into outside Grand Palace in Bangkok, Thailand, Saturday, May 4, 2019. After a more than a decade of political strife, including a military coup and a contentious election less than two months ago, the people of Thailand are witnessing this weekend the coronation of King Maha Vajiralongkorn in a centuries-old royal tradition that last happened seven decades ago. (Photo by Sakchai Lalit/AP photo) 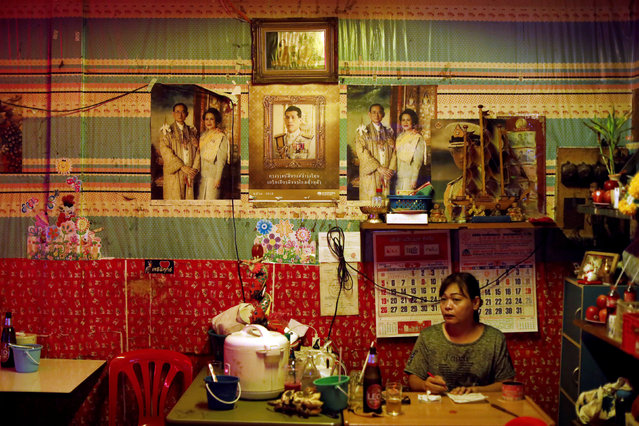 A portrait of King Maha Vajiralongkorn is seen in a bar on the eve of his coronation in Bangkok, Thailand on May 3, 2019. (Photo by Jorge Silva/Reuters) 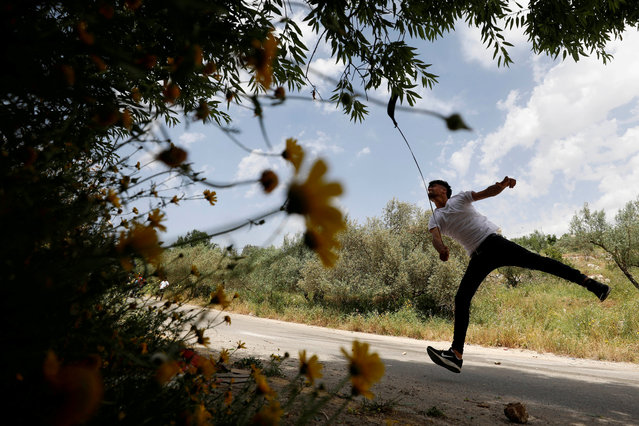 A Palestinian hurls stones at Israeli troops during clashes at a protest against Jewish settlements, near Ramallah in the Israeli-occupied West Bank on May 3, 2019. (Photo by Mohamad Torokman/Reuters) 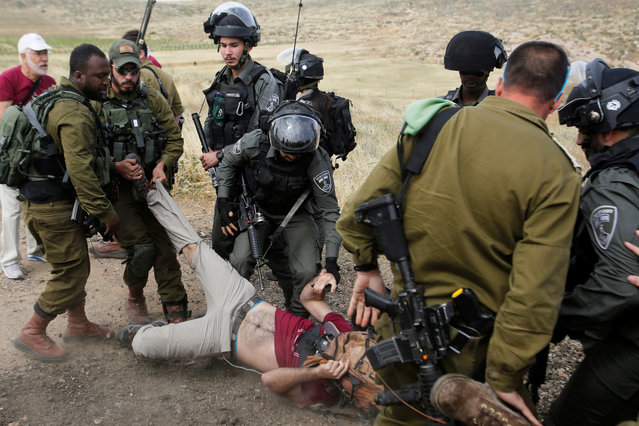 Israeli forces drag a foreign activist as they detain him during a protest against what organizers say are demolitions of Palestinian houses by Israel, in Yatta in the Israeli-occupied West Bank on May 3, 2019. (Photo by Mussa Qawasma/Reuters) 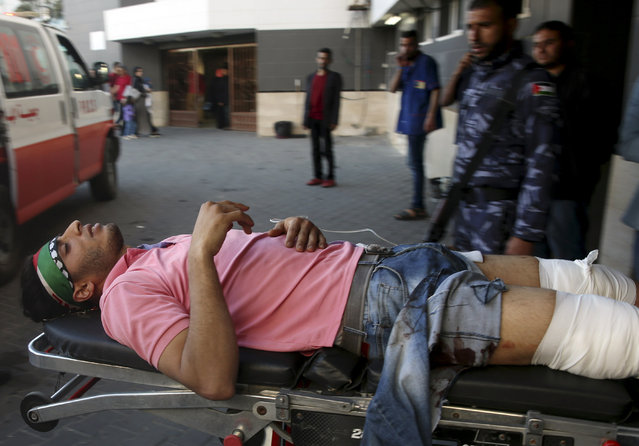 Medics move a wounded youth, who was shot by Israeli troops during a protest at the Gaza Strip's border with Israel, into the treatment room of Shifa hospital in Gaza City, Friday, May 3, 2019. Three Palestinians, including two militants, were killed by Israeli fire Friday after gunshots from the Gaza Strip wounded two Israeli soldiers, officials said, in a new flare-up that shattered a month-long easing of hostilities that was mediated by Egypt. (Photo by Adel Hana/AP Photo) 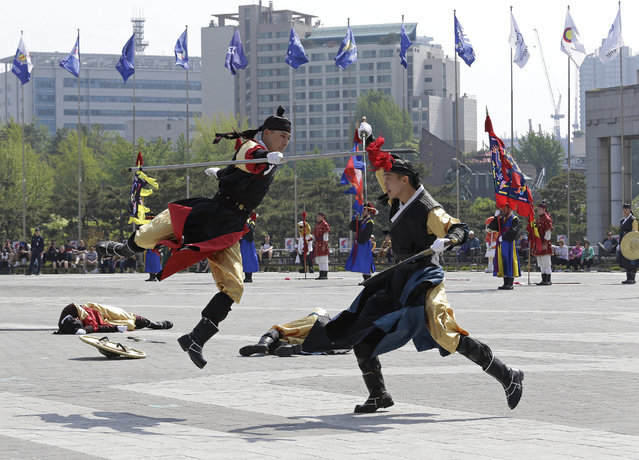 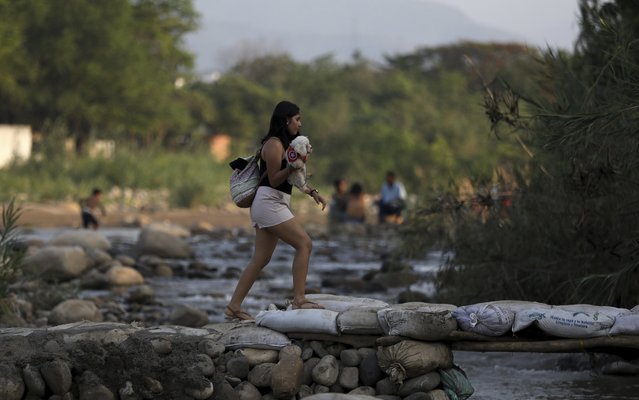 A woman holding her pet crosses illegally into Colombia near the Simon Bolivar International Bridge in La Parada near Cucuta, Colombia, Wednesday, May 1, 2019, on the border with Venezuela. The border area near Cucuta was peaceful Wednesday, even as Venezuelans heeded opposition leader Juan Guaidó's call to fill streets around the nation but security forces showed no sign of backing his cry for a widespread military uprising, instead dispersing crowds with tear gas as the political crisis threatened to deepen. (Photo by Fernando Vergara/AP Photo) 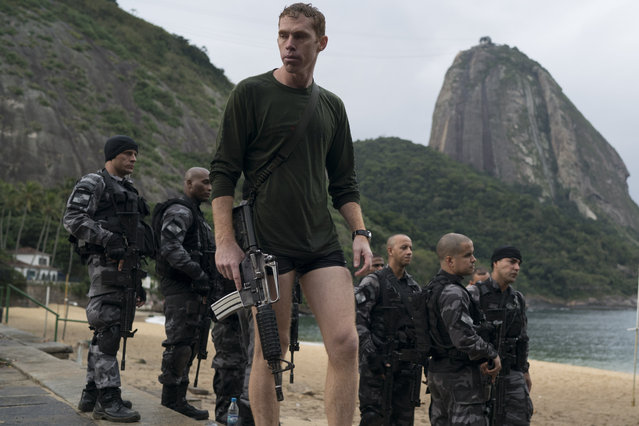 In this June 8, 2018 file photo, armed police officers stand at Red beach during a search for alleged drug traffickers at Urca neighborhood in Rio de Janeiro, Brazil. Police killings in the state of Rio de Janeiro have hit a record high, rising by 18% in the first three months of this year. Official data reviewed by The Associated Press on Friday, May 3, 2019, show police forces in Rio killed 434 people during clashes in those months, compared to 368 people in same period last year. (Photo by Leo Correa/AP Photo/File) 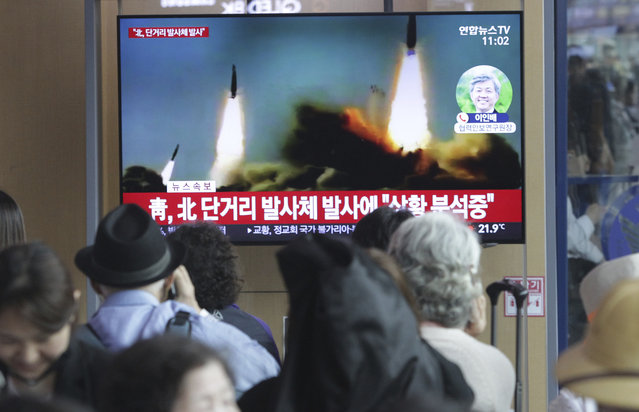 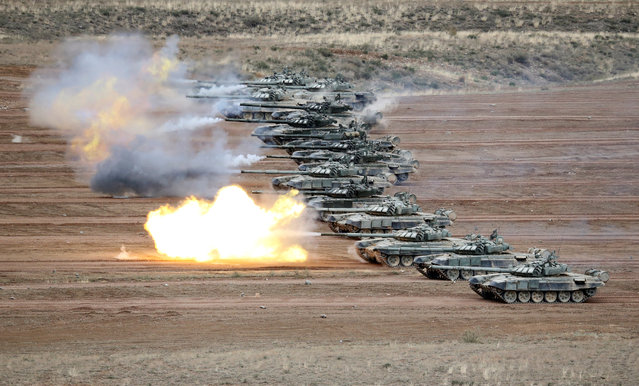 T-72B tanks fire during military exercises at the firing ground Koktal in Almaty Region, Kazakhstan on May 3, 2019. (Photo by Pavel Mikheyev/Reuters) 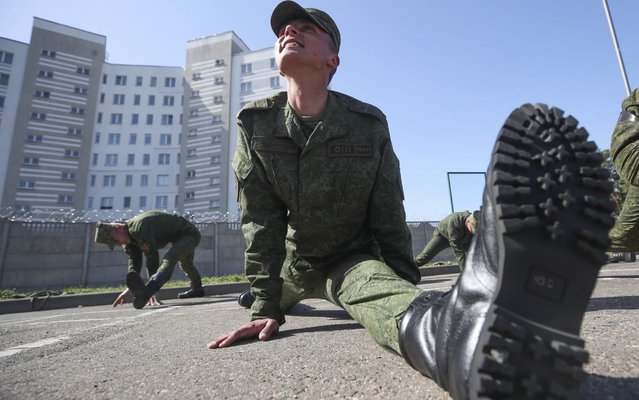 An open training session of the Belarus Defence Ministry Drill Platoon in preparation for a Victory Day Parade commemorating the 74th anniversary of the Soviet Union's victory in the Great Patriotic War in Minsk, Belarus on April 30, 2019. (Photo by Natalia Fedosenko/TASS) 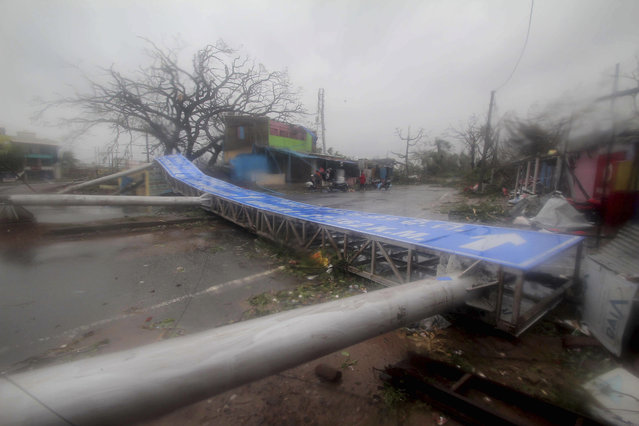 Damaged signage lies on a street in Puri district after Cyclone Fani hit the coastal eastern state of Odisha, India, Friday, May 3, 2019. Cyclone Fani tore through India's eastern coast on Friday as a grade 5 storm, lashing beaches with rain and winds gusting up to 205 kilometers (127 miles) per hour and affecting weather as far away as Mount Everest as it approached the former imperial capital of Kolkata. (Photo by AP Photo/Stringer) 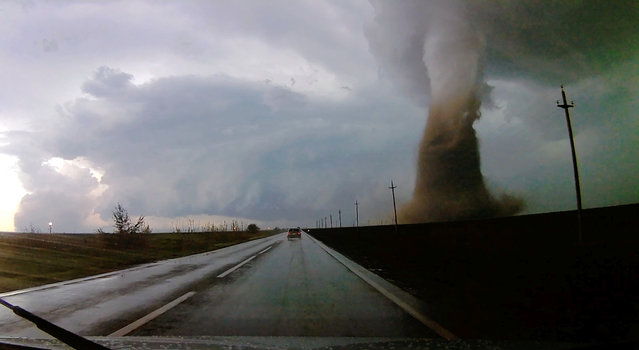 A column of sand and front of clouds are seen by dash cam as the car drives near a tornado in Dragalina, Calarasi county, Romania April 30, 2019 in this still image taken from a video obtained from social media. (Photo by Alexandra Puscasu via Reuters)
Edit Del
05 May 2019 00:07:00, post received 0 comments
Publication archive:
←   →
Popular tags:
All tags
Last searches: