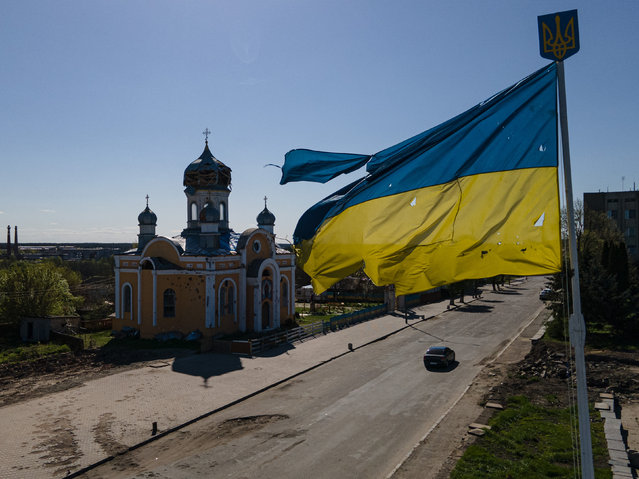 An aerial view shows a damaged St. Godmothers Cover Church next to bullet riddled Ukrainian national flag, on May 4, 2022 in Malyn, Ukraine. The communities north of Kyiv were square in the path of Russia's devastating but ultimately unsuccessful attempt to seize the Ukrainian capital with forces deployed from Belarus, a Russian ally. (Photo by Alexey Furman/Getty Images) 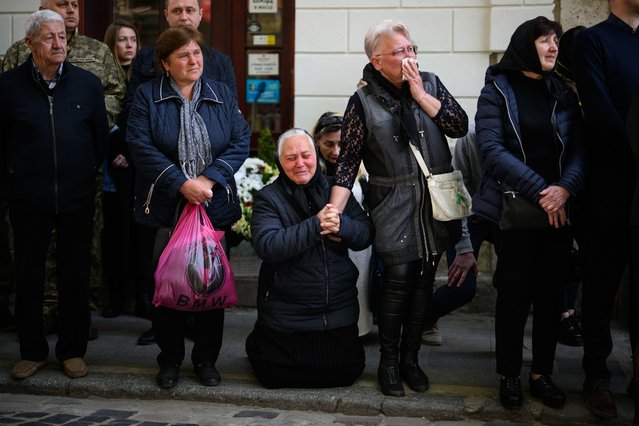 Galina Malets (C) drops to her knees as she sees the coffin of her borther ahead of the funeral service for fallen soldier Igor Malets, aged 59, at the Saints Peter and Paul Garrison Church on May 05, 2022 in Lviv, Ukraine. Igor Malets was wounded on April 27 in Izyum and died in hospital in Dnipro on April 30. The Ukrainian government has not released recent figures on military casualties since Russia's Feb. 24 invasion vary widely, but estimates suggest they are significantly outpaced by Russian losses. (Photo by Leon Neal/Getty Images) 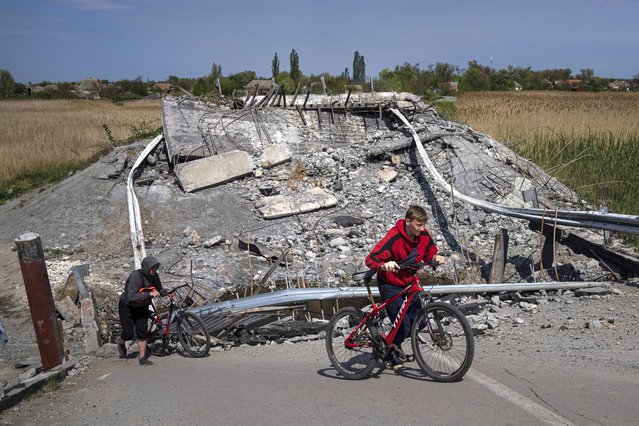 Teenagers on bicycles pass a bridge destroyed by shelling near Orihiv, Ukraine, Thursday, May 5, 2022. (Photo by Evgeniy Maloletka/AP Photo) 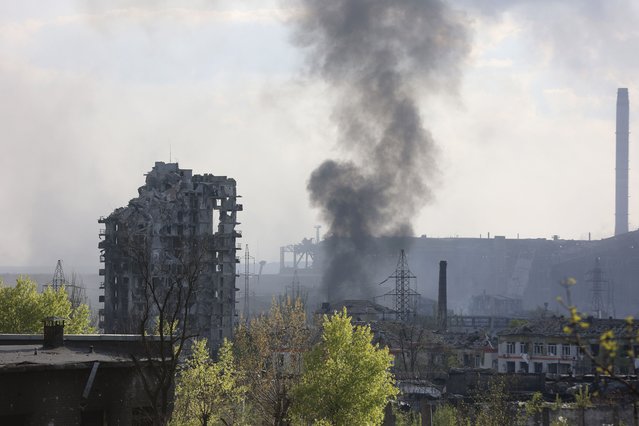 Smoke rises from the Azovstal steel mill in Mariupol, in territory under the government of the Donetsk People's Republic, eastern Ukraine, May 4, 2022. Heavy fighting is raging at the besieged steel plant in Mariupol as Russian forces attempt to finish off the city's last-ditch defenders and complete the capture of the strategically vital port. (Photo by Alexei Alexandrov/AP Photo) 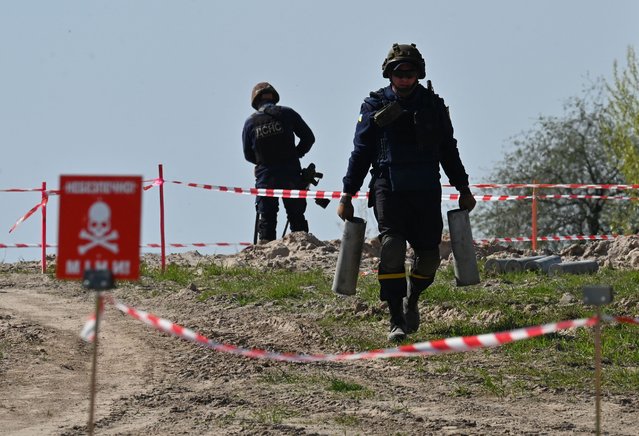 A Ukrainian deminer carries unexploded material during demining works at an airport in the town of Hostomel, northwestern of Kyiv, on May 5, 2022. (Photo by Sergei Supinsky/AFP Photo) 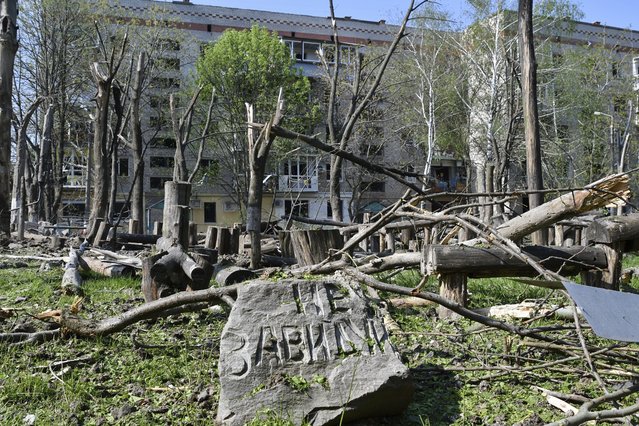 A stone with a sign reads “Don't be jealous” is seen in a yard of an apartment building destroyed by night shelling in Kramatorsk, Ukraine, Thursday, May 5, 2022. (Photo by Andriy Andriyenko/AP Photo) 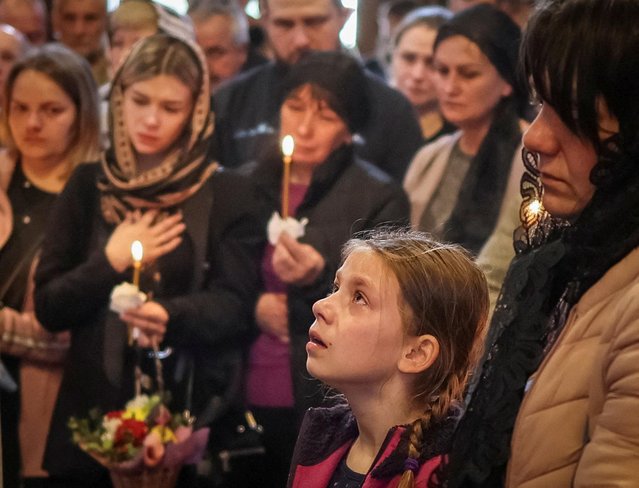 Daughter Sofiia of Ukrainian serviceman Ruslan Borovyk, who was killed in a battle amid Russia's attack on Ukraine, reacts as she attends his memorial service in Mikhailovsky Zlatoverkhy Cathedral (St. Michael's Golden-Domed Cathedral) in central Kyiv, Ukraine on May 4, 2022. (Photo by Gleb Garanich/Reuters) 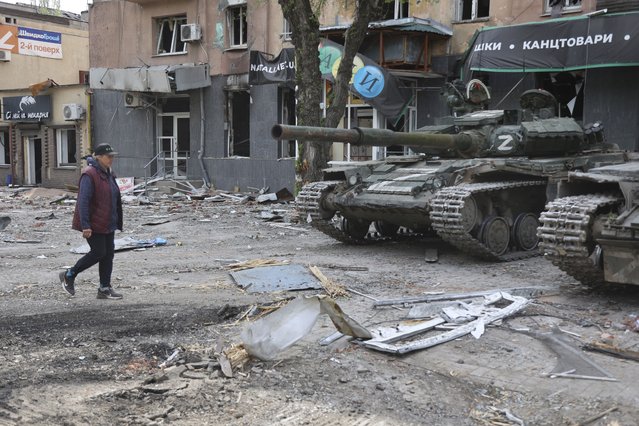 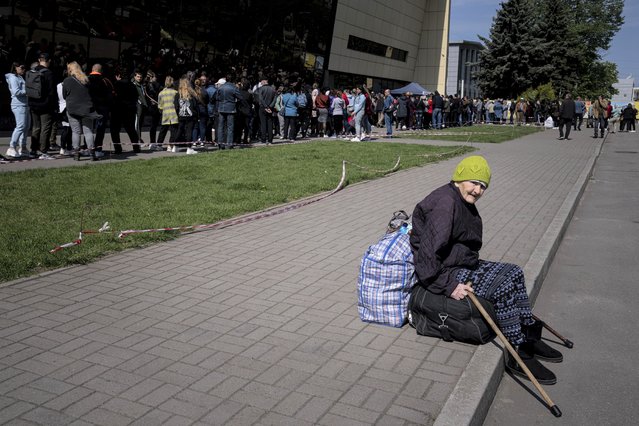 Didenko Ekaterina, 93, from the Ukrainian city of Vuhledar, waits for her daughter as people stay in line for registration at the aid distribution center for displaced people in Zaporizhia, Ukraine, Thursday, May 5, 2022. (Photo by Evgeniy Maloletka/AP Photo) 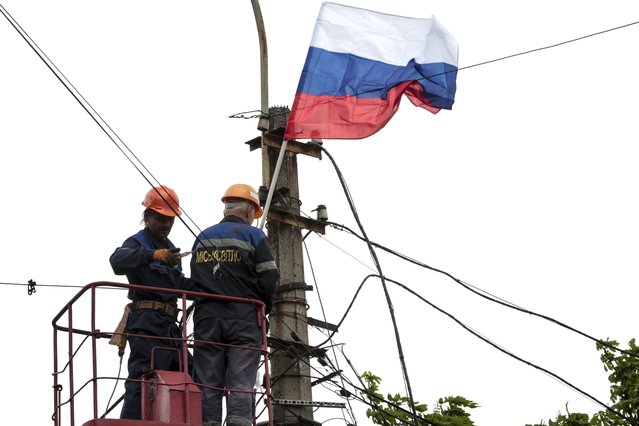 Municipal workers attach a Russian national flag to a pole preparing to celebrate 77 years of the victory in WWII in Mariupol, in territory under the government of the Donetsk People's Republic, eastern Ukraine, Thursday, May 5, 2022. Heavy fighting is raging at the besieged steel plant in Mariupol as Russian forces attempt to finish off the city's last-ditch defenders and complete the capture of the strategically vital port. (Photo by AP Photo/Stringer) 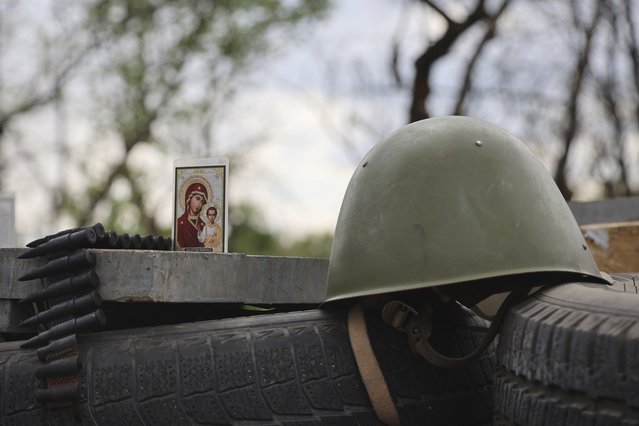 An icon stands next to a military helmet at a check point in Mariupol, in territory under the government of the Donetsk People's Republic, eastern Ukraine, Wednesday, May 4, 2022. (Photo by Alexei Alexandrov/AP Photo) 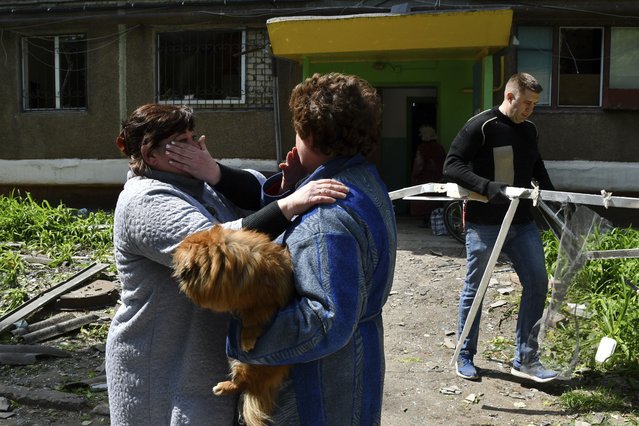 Women react in a yard of an apartment building destroyed by night shelling in Kramatorsk, Ukraine, Thursday, May 5, 2022. (Photo by Andriy Andriyenko/AP Photo) 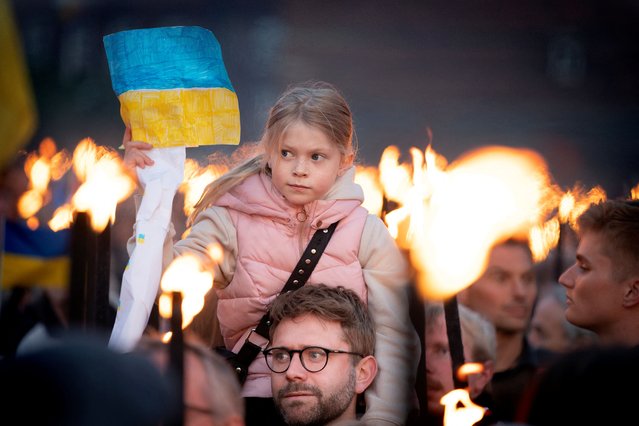 People wait for Ukrainian President Volodymyr Zelenskiy to begin his speech on screen at the City Hall Square in Copenhagen, Denmark on May, 4, 2022. The event was organized by JP/Politiken Media Group. (Photo by Liselotte Sabroe/Ritzau Scanpix via Reuters) 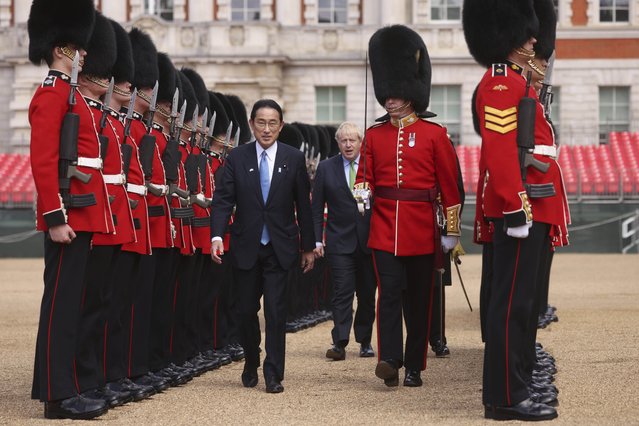 Britain's Prime Minister Boris Johnson, centre background, walks with Japan's Prime Minister Fumio Kishida as they review an Honour Guard, during a welcoming ceremony in Westminster, London, Thursday, May 5, 2022. The leaders of Britain and Japan met in London to announce a new defense agreement against the backdrop of the war in Ukraine. (Photo by Dan Kitwood/Pool Photo via AP Photo) 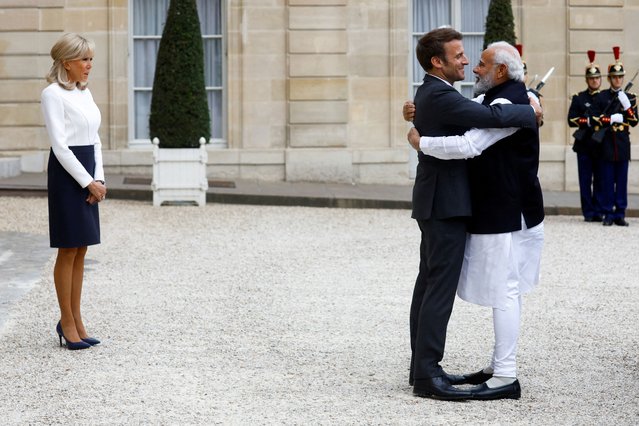 France's President Emmanuel Macron, accompanied by his wife Brigitte Macron, welcomes India's Prime Minister Narendra Modi before a meeting at the Elysee Palace in Paris, France on May 4, 2022. (Photo by Gonzalo Fuentes/Reuters) 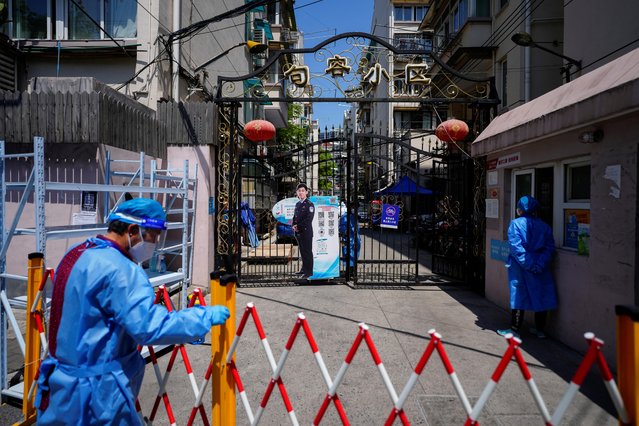 The closed entrance of a residential area is pictured during lockdown amid the coronavirus disease (COVID-19) pandemic, in Shanghai, China on May 5, 2022. (Photo by Aly Song/Reuters) 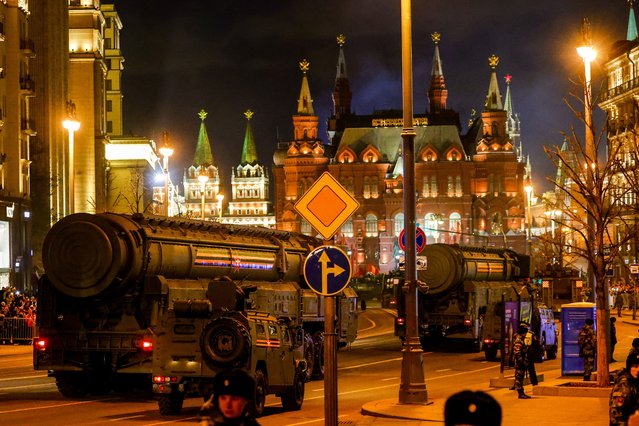 Russian military vehicles move along Tverskaya street during the rehearsal of Victory Day military parade marking the 77th anniversary of the victory over Nazi Germany in World War II, at Red Square in Moscow, Russia on May 4, 2022. (Photo by Sefa Karacan/Anadolu Agency via Getty Images) 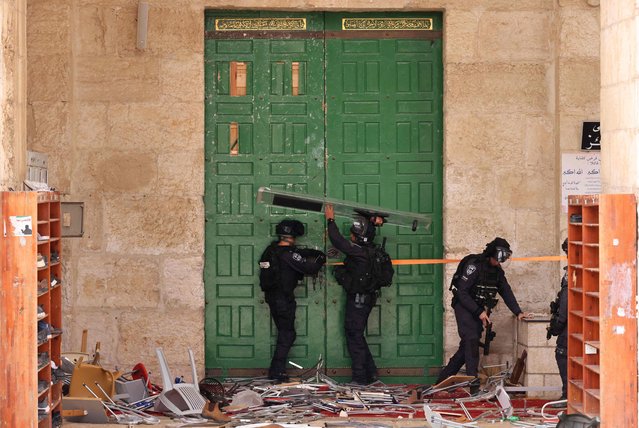 Israeli police secure the door of the al-Aqsa mosque during clashes with Israeli security forces on May 5, 2022 following a visit by a group of Jewish people at the al-Aqsa mosque compound which is the site of Islam's third-holiest place and of Judaism's holiest site, known to Jews as the Temple Mount, in the Old City of Jerusalem. Clashes erupted between Israelis and Palestinians at Jerusalem's Al-Aqsa mosque compound, after a 10-day cooling of tensions at the holy site, Israeli police said. The Israeli police said they had repelled “dozens of rioters” who had been “throwing stones and other objects” at the security forces. (Photo by Ahmad Gharabli/AFP Photo) 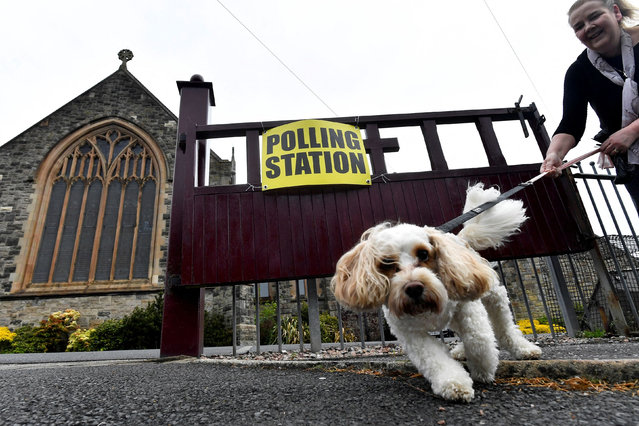 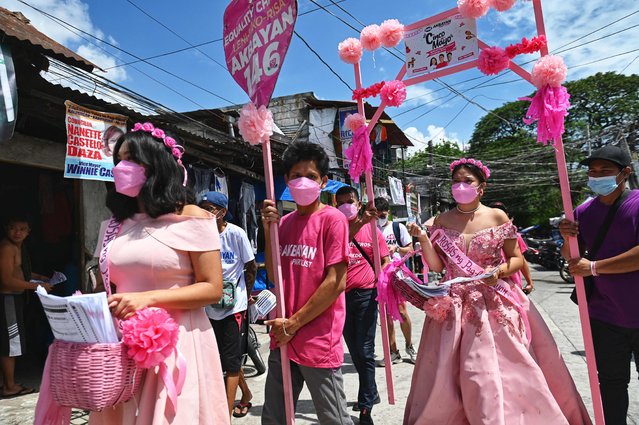 Supporters of vice president and presidential candidate Leni Robredo, wearing dresses to celebrate the Flores de Mayo (Flowers of May) religious festival, hand out leaflets during campaigning in a residential neighbourhood in Quezon City, suburban Manila on May 5, 2022. (Photo by Chaideer Mahyuddin/AFP Photo) 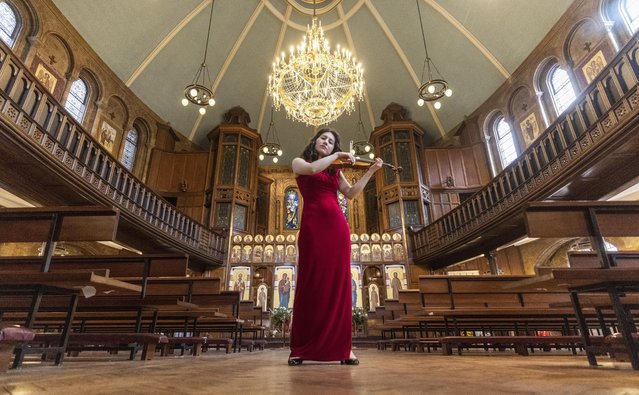 Violinist Irène Duval rehearses at Ukrainian Catholic Cathedral in London for a fundraising concert organised by Wigmore Hall for the Ukrainian Welcome Centre on May 5, 2022 in London, England. Millions of Ukrainians have left their country seeking safe haven after Russia invaded Ukraine on February 24, 2022. (Photo by Apher Richard Pohle/The Times) 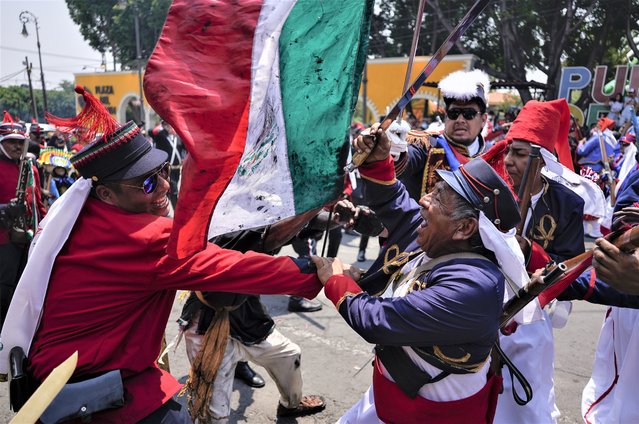 People dressed as Zacapoaxtla Indigenous people clash with others playing the part of French soldiers as they reenact The Battle of Puebla as part of Cinco de Mayo celebrations in the Peñon de los Baños neighborhood of Mexico City, Thursday, May 5, 2022. Cinco de Mayo commemorates the victory of an ill-equipped Mexican army over French troops in Puebla on May 5, 1862. (Photo by Eduardo Verdugo/AP Photo) 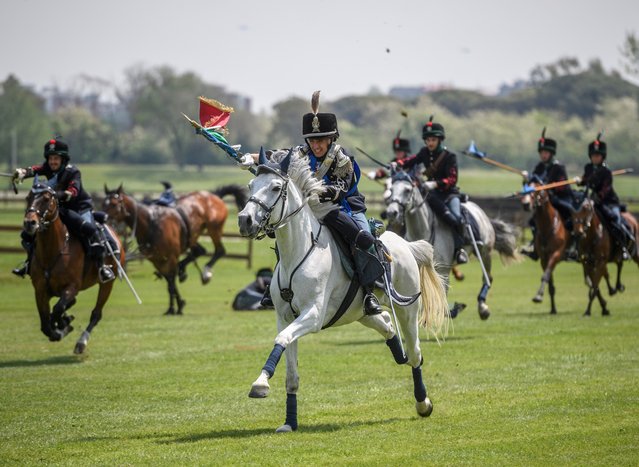 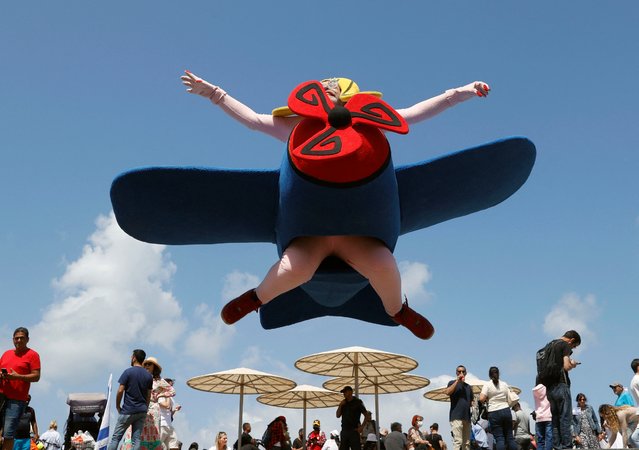 An Israeli dressed as an aeroplane is pictured on the beach in the Mediterranean coastal city of Tel Aviv on May 5, 2022, as Israel marks Independence Day (Yom HaAtzmaut), 74 years since the establishment of the Jewish state. Israel's first prime minister David Ben-Gurion declared the existence of the State of Israel in Tel Aviv in 1948, ending the British mandate. (Photo by Jack Guez/AFP Photo) 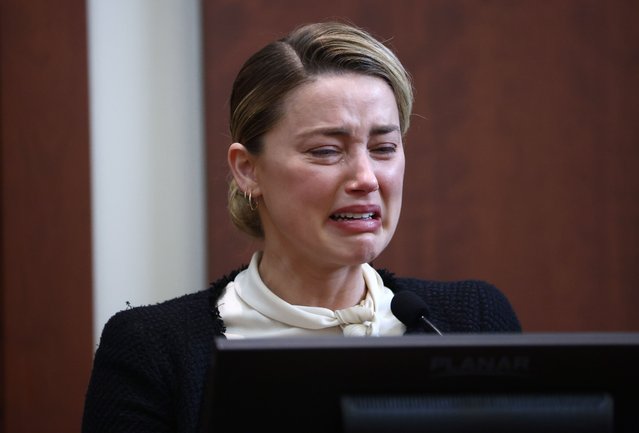 US actress Amber Heard reacts on the stand during the 50 million US dollar Depp vs Heard defamation trial at the Fairfax County Circuit Court in Fairfax, Virginia, USA, 05 May 2022. Johnny Depp's 50 million US dollar defamation lawsuit against Amber Heard that started on 10 April is expected to last five or six weeks. (Photo by Jim Lo Scalzo/EPA/EFE) 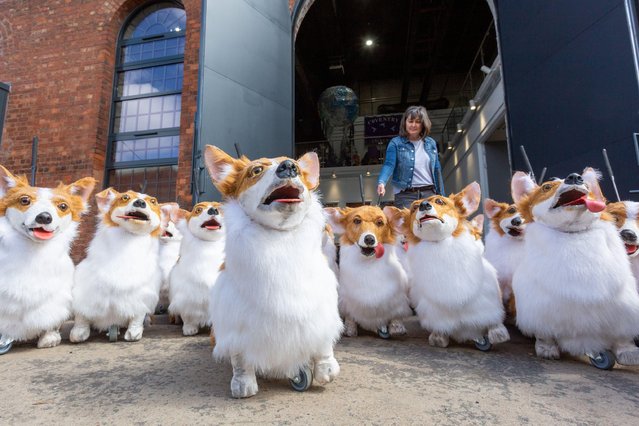 Puppet corgis created by Coventry based events production company Imagineer sit patiently on May 5, 2022 as the company prepares its contribution to The Queen's Platinum Jubilee Pageant next month. The corgis are part of the company's show “The Queen's Favourites”. (Photo by Peter Lopeman/Alamy Live News)
Edit Del
06 May 2022 05:56:00, post received 0 comments
Publication archive:
←   →
Popular tags:
All tags
Last searches: