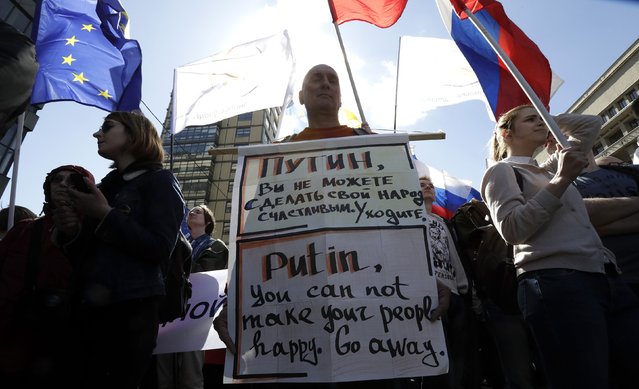 A Russian opposition supporter holds banner during a rally in Moscow, Russia, May 6, 2017. (Photo by Tatyana Makeyeva/Reuters) 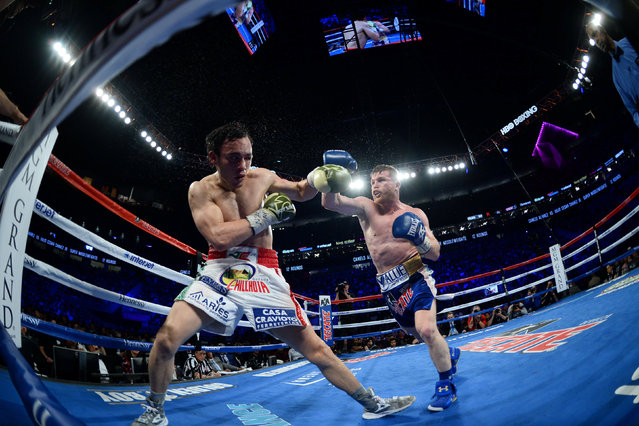 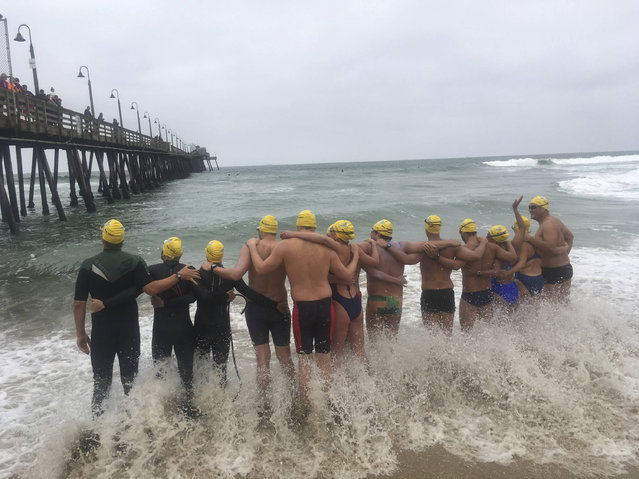 Athletes from six countries join arms before swimming off from Imperial Beach, Calif., to Mexico, in what they say is a show of solidarity with immigrants on Friday, May 5, 2017. The swimmers from the United States, Mexico, Israel, New Zealand and South Africa were escorted by a Mexican Navy ship as they reached a beach in Tijuana, a short distance from a border fence that juts into the Pacific Ocean. (Photo by Elliot Spagat/AP Photo) 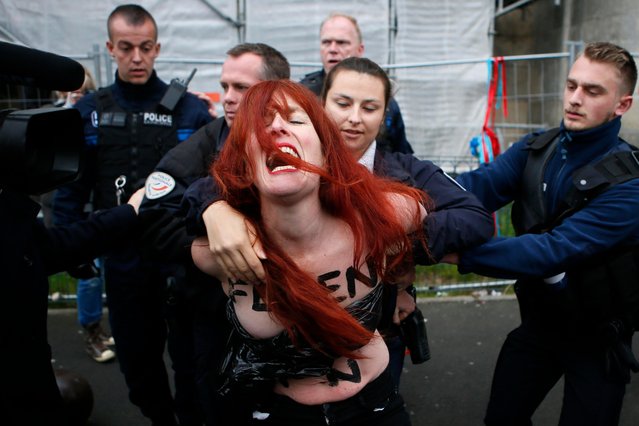 A Femen activist is led away by French police in Henin-beaumont, northern France, Sunday, May 7, 2017. Voters across France are choosing a new president in an unusually tense and important election that could decide Europe's future, making a stark choice between pro-business progressive candidate Emmanuel Macron and far-right populist Marine Le Pen. (Photo by Francois Mori/AP Photo) 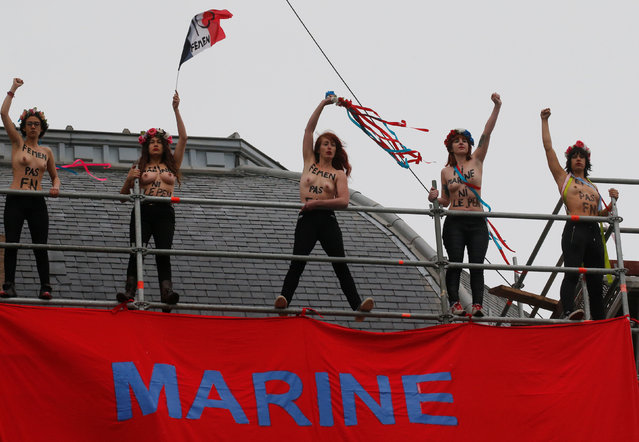 Women's rights group FEMEN protest with a sign reading “Marine in Power, Marianne in Despair” in the city of Hénin-Beaumont, during the second round of 2017 French presidential election, France, May 7, 2017. (Photo by Pascal Rossignol/Reuters) 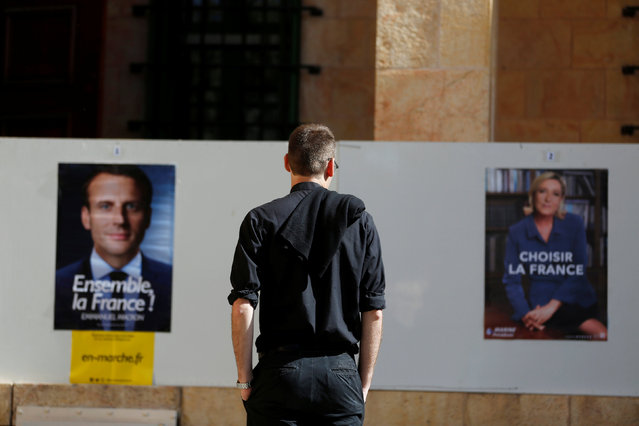 A French national living in Israel looks at posters depicting the candidates of the 2017 French presidential election, Emmanuel Macron and Marine Le Pen, outside a polling station in Jerusalem May 7, 2017. (Photo by Ronen Zvulun/Reuters) 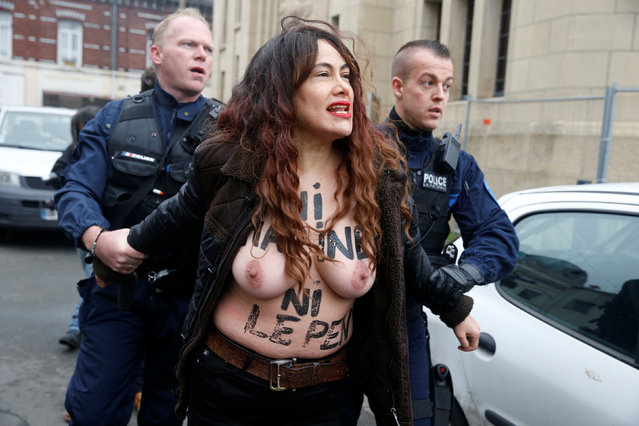 A member of women's rights group FEMEN is detained by policemen during a protest in the second round of 2017 French presidential election, in Henin-Beaumont, France, May 7, 2017. (Photo by Pascal Rossignol/Reuters) 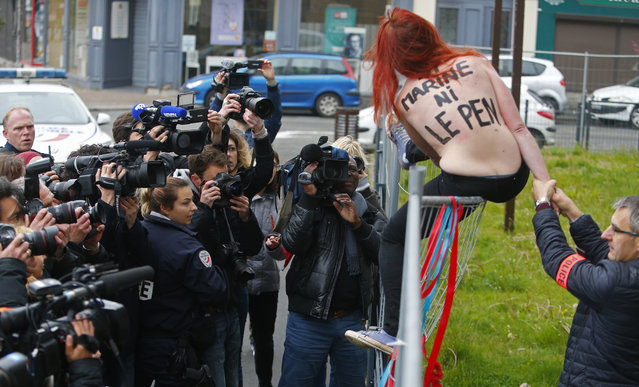 A Femen activist is led away by police after activists lowered a banner protesting against Marine Le Pen's FN party in Henin-beaumont, northern France, Sunday, May 7, 2017. Voters across France are choosing a new president in an unusually tense and important election that could decide Europe's future, making a stark choice between pro-business progressive candidate Emmanuel Macron and far-right populist Marine Le Pen. The text on the activists' back reads “Neither Marine Nor Le Pen”. (Photo by Michel Spingler/AP Photo) 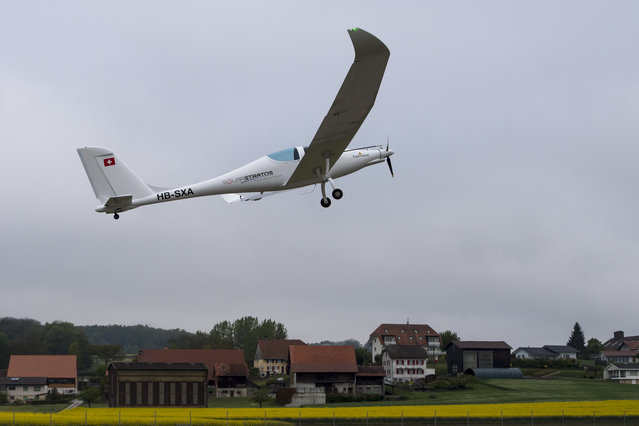 The solar-powered plane SolarStratos takes off at the airbase in Payerne, Switzerland, Friday, May 5, 2017. The main goal of the SolarStratos Mission project by Swiss adventurer Raphael Domjan, is to be the first solar flight ever climbing to 75'000 feet – a stratospheric flight. (Photo by Jean-Christophe Bott/Keystone via AP Photo) 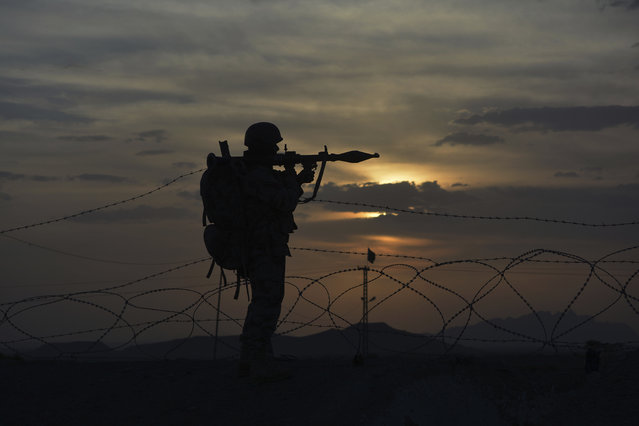 A Pakistani border security guard stands alert at Pakistan-Afghanistan border post, Chaman in Pakistan, Friday, May 5, 2017. Backed by artillery, Afghan security forces fired across the border on Pakistani census workers and troops escorting them on Friday, killing many people and drawing a response from the military, Pakistan said. On the Afghan side, officials reported that scores of people killed in the incident, a significant escalation of hostilities between the two neighbours. (Photo by Matiullah Achakzai/AP Photo) 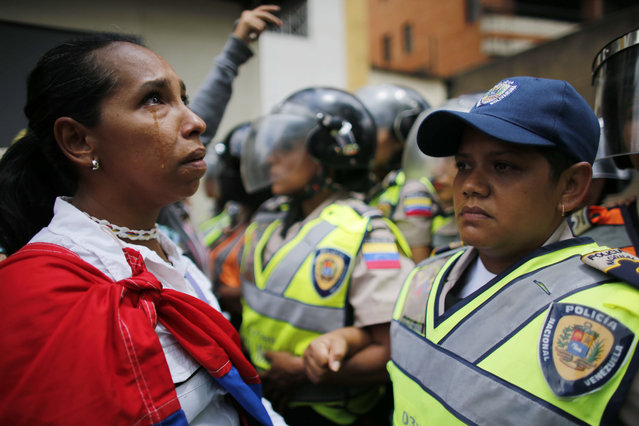 A demonstrator stands in front of policewomen blocking an opposition march from reaching the Interior Ministry in Caracas, Venezuela, Saturday, May 6, 2017. Thousands of women wearing white and carrying flowers marched to ask for a stop of repression and to pay tribute to those who were killed in weeks of near-daily violent protests calling on President Nicolas Maduro to step down. (Photo by Ariana Cubillos/AP Photo) 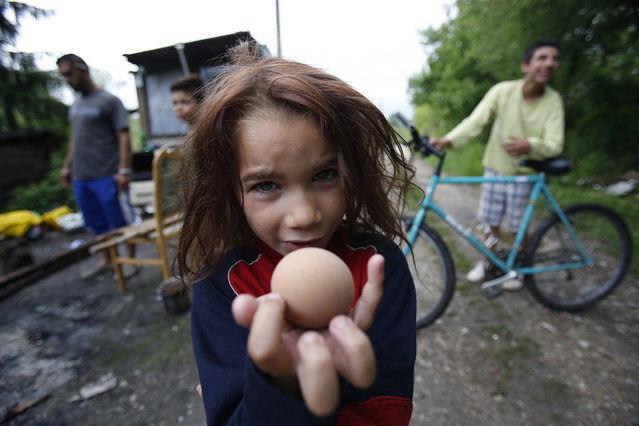 Roma girl Samira Ramic poses for photo as she shows a boiled egg, during St. George's Day celebration with her family members, in the village of Kiseljak, near Tuzla,140 kms north of Sarajevo, May 6, 2017. Members of the Roma minority community in Bosnia and Herzegovina celebrated their biggest holiday, St. George's Day, or Djurdjevdan, with traditional rituals such as taking baths and washing hands with water from church wells and cracking eggs, as the holiday marks the advent of spring. (Photo by Amel Emric/AP Photo)
Edit Del
07 May 2017 10:03:00, post received 0 comments
Publication archive:
←   →
Popular tags:
All tags
Last searches: