A man and a girl who left a shelter in the Metallurgical Combine Azovstal walk to a bus escorting by a serviceman of Russian Army in Mariupol, in territory under the government of the Donetsk People's Republic, eastern Ukraine, Friday, May 6, 2022. (Photo by Alexei Alexandrov/AP Photo) 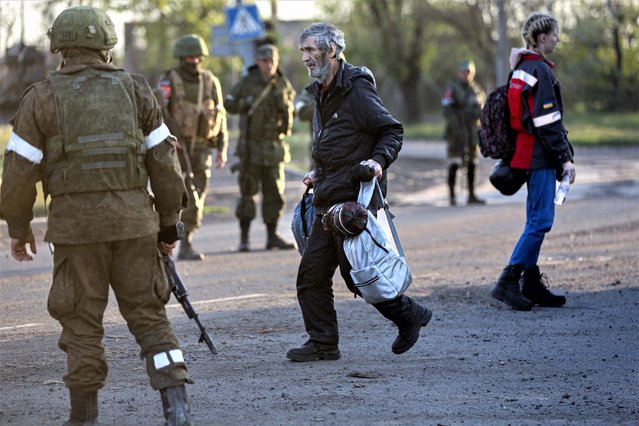 A woman holds up a baby as a family who fled from Enerhodar is reunited upon their arrival to a reception center for displaced people in Zaporizhzhia, Ukraine, Friday, May 6, 2022. Thousands of Ukrainian continue to leave Russian occupied areas. (Photo by Francisco Seco/AP Photo) A service member of pro-Russian troops stands atop an armoured personnel carrier during fighting in Ukraine-Russia conflict near the Azovstal steel plant in the southern port city of Mariupol, Ukraine on May 5, 2022. (Photo by Alexander Ermochenko/Reuters) A woman covers her ears from the sound of mortar fire as people queue to collect pensions from a postal delivery van that reached the frontline despite the ongoing conflict in Mayaky, eastern Ukraine, on May 6, 2022, amid the Russian invasion of Ukraine. (Photo by Yasuyoshi Chiba/AFP Photo) 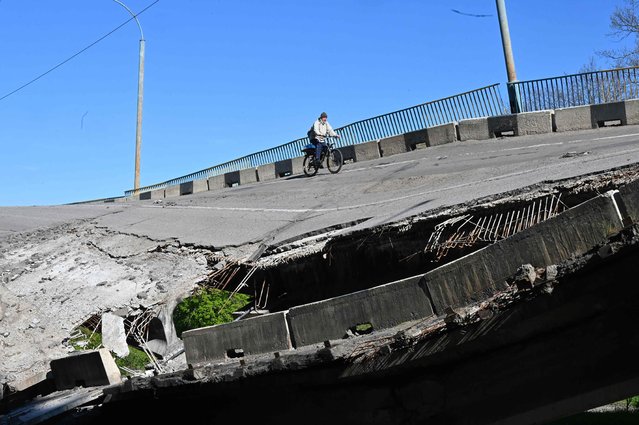 A man rides his bicycle over a heavily damaged bridge near Pechenegi village in the Kharkiv region on May 5, 2022, amid the Russian invasion of Ukraine. (Photo by Sergey Bobok/AFP Photo) 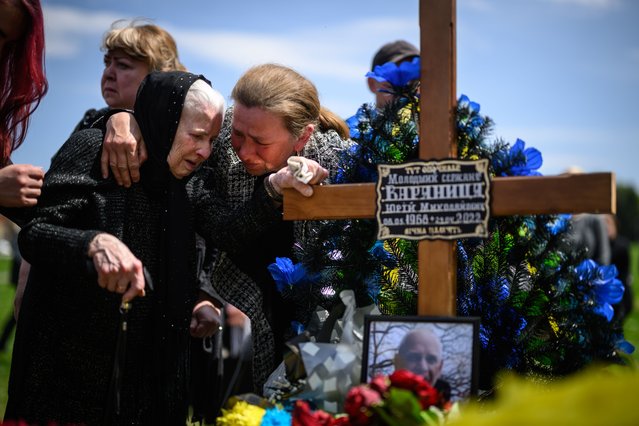 Family members mourn at the graveside of soldier Yuri Varyanytsia during the simultaneous burial of three soldiers in the Field of Mars at Lychakiv cemetery on May 06, 2022 in Lviv, Ukraine. Varyanytsia served with the 103rd Separate Brigade of the Territorial Defense Forces, and died on April 29 after coming under artillery fire in the Luhansk Region. The Ukrainian government has not released recent figures on military casualties since Russia's Feb. 24 invasion vary widely, but estimates suggest they are significantly outpaced by Russian losses. (Photo by Leon Neal/Getty Images) 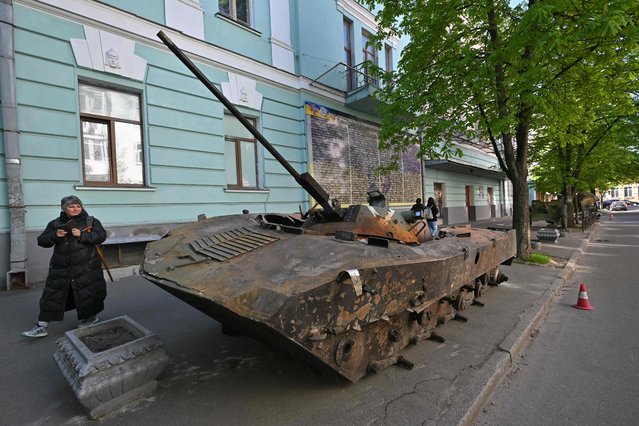 A pedestrian takes a picture as she walks past the wreckage of a Russian armoured vehicle outside the National Museum of Military History of Ukraine in Kyiv on May 5, 2022. The exhibit's curator Pavlo Netesov hopes the freshly destroyed equipment will serve as a visible reminder of the war's toll to residents in downtown Kyiv – who have been largely spared from the harsh ground fighting that has erupted elsewhere across the country. (Photo by Sergei Supinsky/AFP Photo) 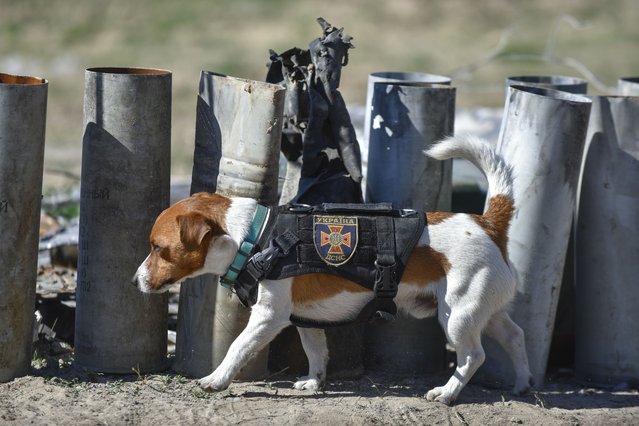 A picture taken during a trip organized by the Ukrainian interior ministry shows dog Patron, trained to search for explosives, during demining works at the Gostomel airfield near Kyiv (Kiev), Ukraine, 05 May 2022. On 24 February, Russian troops had entered Ukrainian territory in what the Russian president declared a “special military operation”, resulting in fighting and destruction in the country, a huge flow of refugees, and multiple sanctions against Russia. (Photo by Oleg Petrasyuk/EPA/EFE) Service members of pro-Russian troops fire from a tank during fighting in Ukraine-Russia conflict near the Azovstal steel plant in the southern port city of Mariupol, Ukraine on May 5, 2022. (Photo by Alexander Ermochenko/Reuters) Troops march during a rehearsal for the Victory Day military parade which will take place at Dvortsovaya (Palace) Square on May 9 to celebrate 77 years after the victory in World War II in St. Petersburg, Russia, Thursday, May 5, 2022. (Photo by Dmitri Lovetsky/AP Photo) A resident looks out through a gap in the barrier at a residential area during lockdown, amid the coronavirus disease (COVID-19) pandemic, in Shanghai, China, May 6, 2022. (Photo by Aly Song/Reuters) People celebrate Israel's Independence Day, marking the 74th anniversary of the creation of the state, in Tel Aviv, Israel on May 5, 2022. (Photo by Amir Cohen/Reuters) Youth pro-abortion rights demonstrators argue with a counter-protestor during a rally outside of the Supreme Court in Washington, D.C. on May 5, 2022, following the leak of a draft Supreme Court opinion to overthrow Roe vs. Wade. (Photo by Bryan Dozier/Anadolu Agency via Getty Images) 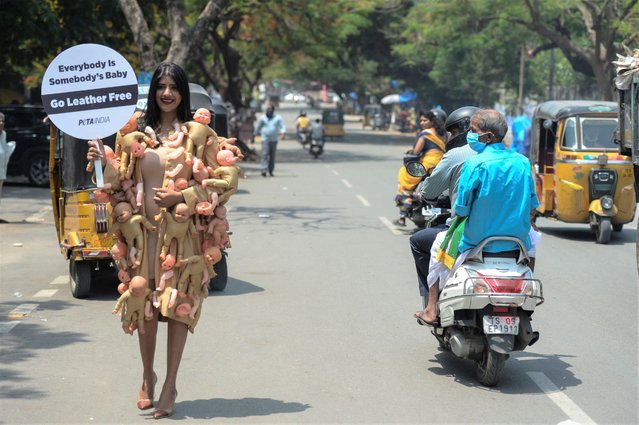 An activist of People for the Ethical Treatment of Animals (PETA) stands along a road wearing a coat with baby dolls to raise awareness about the leather industry, in Hyderabad on May 6, 2022. (Photo by Noah Seelam/AFP Photo) A man takes photos of mascots of the 2022 Asian Games in Hangzhou, in China's eastern Zhejiang province on May 6, 2022. (Photo by AFP Photo/China Stringer Network) 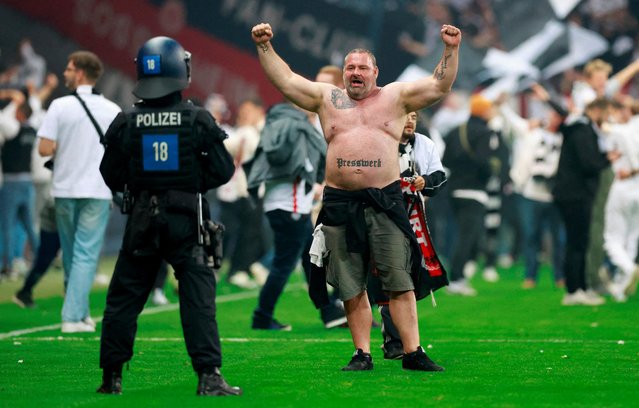 An Eintracht Frankfurt fan celebrates on the pitch after the match with West Ham United, Deutsche Bank Park, Frankfurt, Germany on May 5, 2022. (Photo by Peter Cziborra/Action Images via Reuters) Returning for the third time since its mining in 1901, the “Red Cross“, a fancy intense yellow, cushion-shaped 205.07 carat diamond and a 228.31 carat white diamond called “The Rock” that could fetch 30 million US dollars and is the largest ever seen throughout auction market history are pictured during a preview at Christie's before their auction sale in Geneva, Switzerland, May 6, 2022. (Photo by Denis Balibouse/Reuters) Models present a variety of creations from the Chanel Cruise 2022-23 Collection during a fashion show in Monaco, 05 May 2022. (Photo by Sebastien Nogier/EPA/EFE) 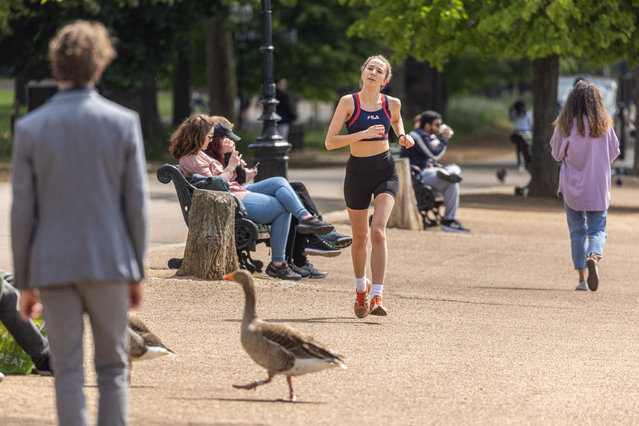 Members of the public enjoy the warm sunshine in Hyde Park, London on May 5, 2022. Weather experts predict a warm weekend ahead with the weather further improving into next week with highs of over 24C expected. (Photo by Alex Lentati/London News Pictures)
Edit Del
07 May 2022 05:32:00, post received 0 comments
Publication archive:
←   →
Popular tags:
All tags
Last searches: