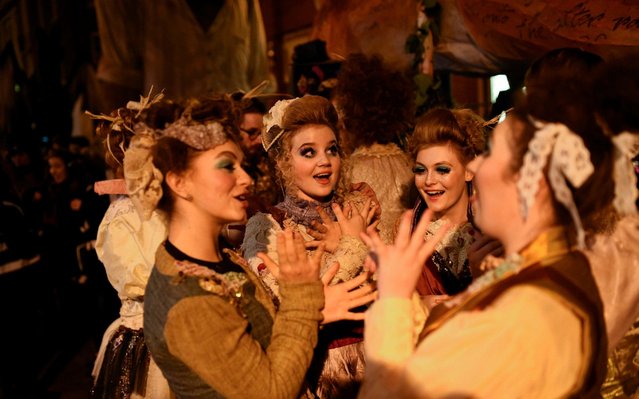 Performers prepare to start the Land of Green Ginger Unleashed procession presented by the Hull UK City of Culture 2017 in Kingston upon Hull, northeast England on November 11, 2017. The magical parade of beasts, giants, shape shifters and mischief makers through the streets of Hull was performed by story- telling and street performance group Macnas in partnership with And Now as part of the celebrations of Hull UK City of Culture 2017. (Photo by Oli Scarff/AFP Photo) 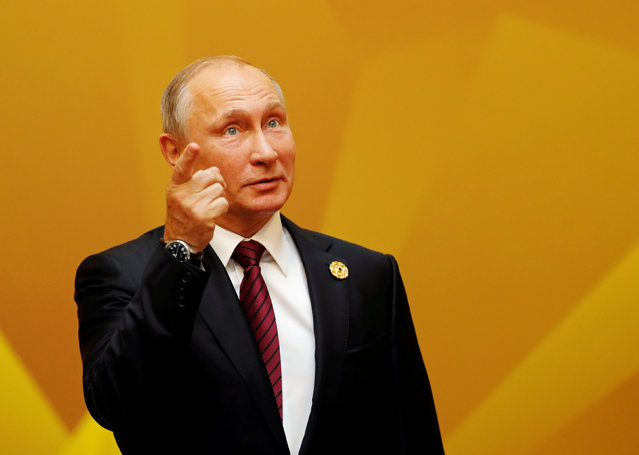 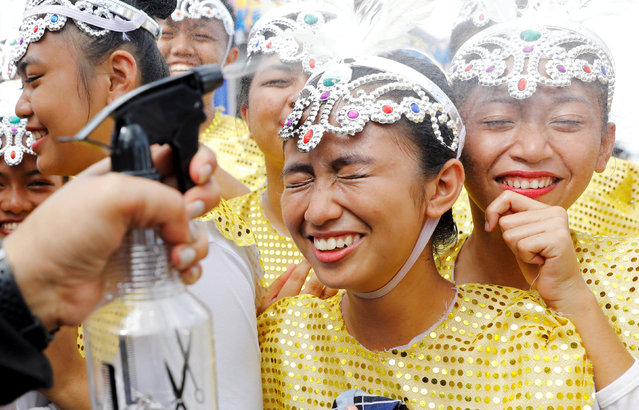 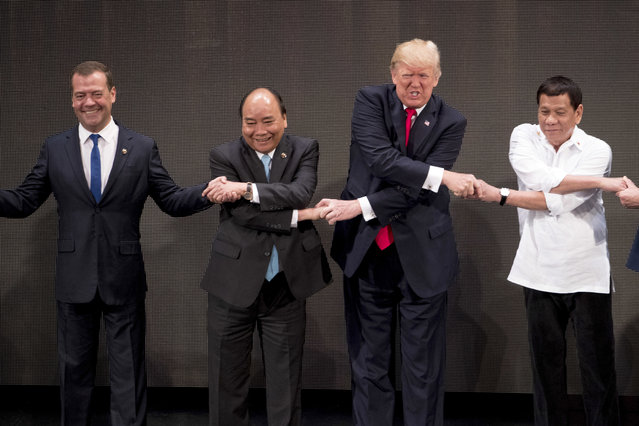 U.S. President Donald Trump, second from rigtht, reacts as he does the “ASEAN-way handshake” with Russian Prime Minister Dmitry Medvedev, left, Vietnamese President Tran Dai Quang, second from left, and Philippine President Rodrigo Duterte on stage during the opening ceremony at the ASEAN Summit at the Cultural Center of the Philippines, Monday, November 13, 2017, in Manila, Philippines. Trump initially did the handshake incorrectly. Trump is on a five-country trip through Asia traveling to Japan, South Korea, China, Vietnam and the Philippines. (Photo by Andrew Harnik/AP Photo) 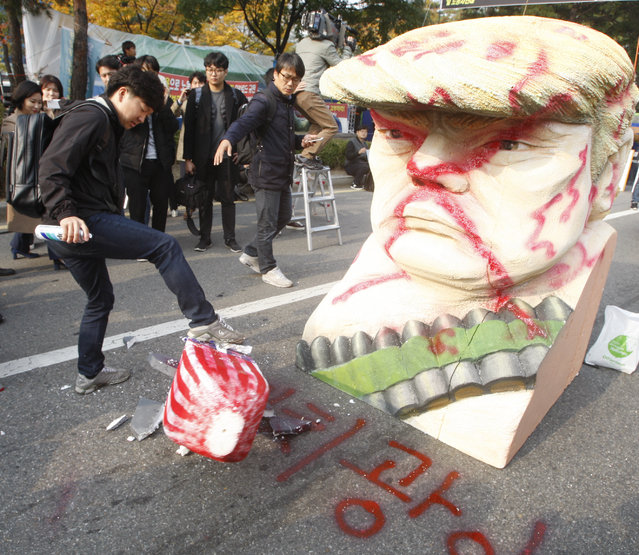 A South Korean protester kicks a mock rocket after spray painting the word “lunatic” next to a bust resembling US President Donald J. Trump during a rally held to show opposition to Trump's visit to South Korea, near the National Assembly in Seoul, South Korea, 08 November 2017. Trump is on a two-day official visit to South Korea, the second stop on his 12 day tour of Asia. (Photo by Kim Hee-Chul/EPA/EFE) 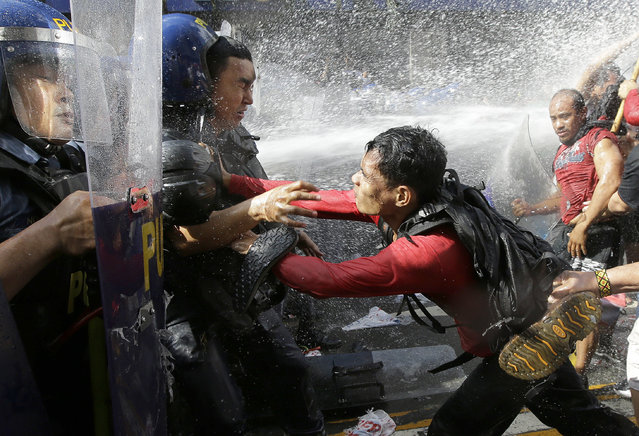 A protester pushes a police as they are dispersed while trying to get near the U.S. Embassy in Manila, Philippines to protest against the visit of U.S. President Donald Trump on Sunday November 12, 2017. Trump offered to mediate in the South China Sea disputes Sunday and his Chinese counterpart played down concerns over Beijing's military buildup and the prospects of war in the contested waters. (Photo by Aaron Favila/AP Photo) 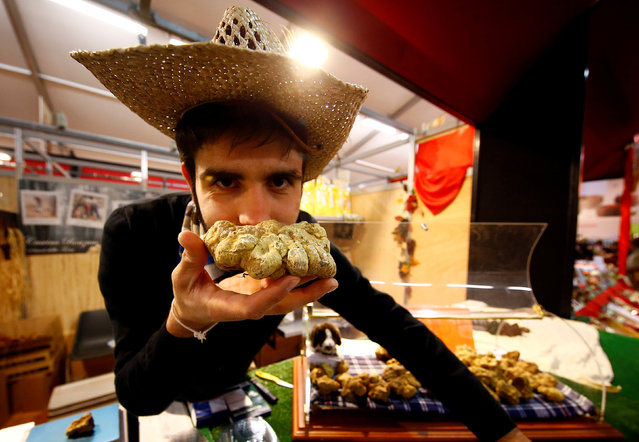 A truffle seller shows a truffle in a local market in Alba, northwestern Italy, November 11, 2017. (Photo by Stefano Rellandini/Reuters) 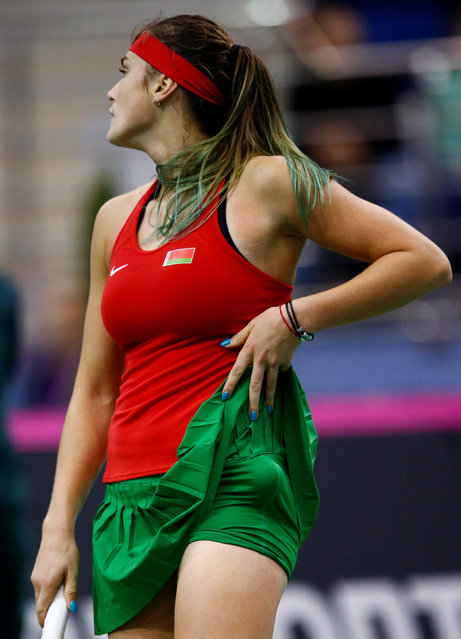 Belarus' Aryna Sabalenka reacts as she plays against US Sloane Stephens, on November 11, 2017 in Minsk, during their Fed Cup final tennis match between Belarus and the United States. (Photo by Vasily Fedosenko/Reuters) 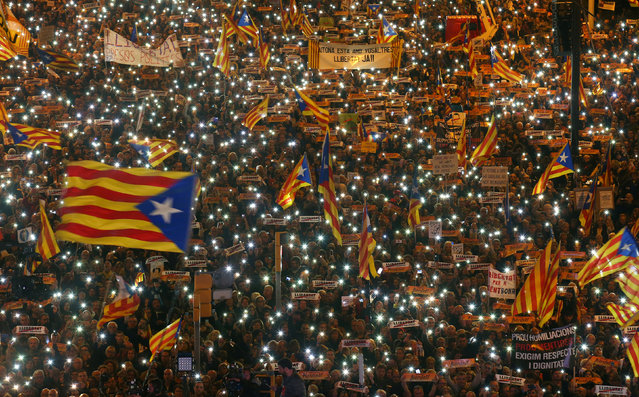 Protesters hold the lights of their mobile phones as they wave Estelada flags during a demonstration called by pro-independence associations asking for the release of jailed Catalan activists and leaders, in Barcelona, Spain, November 11, 2017. (Photo by Albert Gea/Reuters) 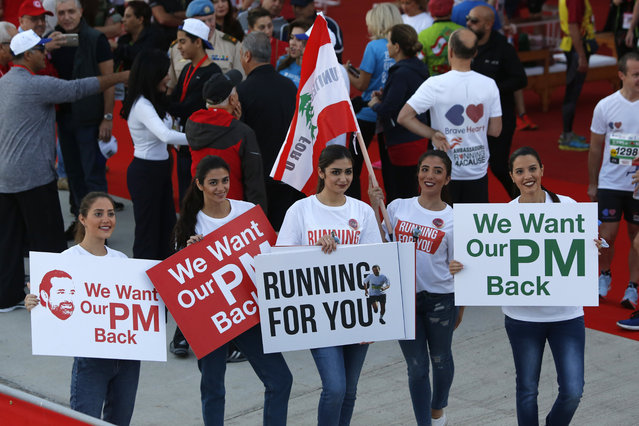 Lebanese women hold placards supporting the outgoing Lebanese Prime Minister Saad Hariri to return from Saudi Arabia during the Beirut Marathon in Beirut, Lebanon, Sunday, November 12, 2017. Absent from the marathon this year is Hariri, a regular participant, who resigned from his post unexpectedly last week while in Saudi Arabia. The country's President Michel Aoun urged runners to call on the prime minister to return home. (Photo by Hassan Ammar/AP Photo) 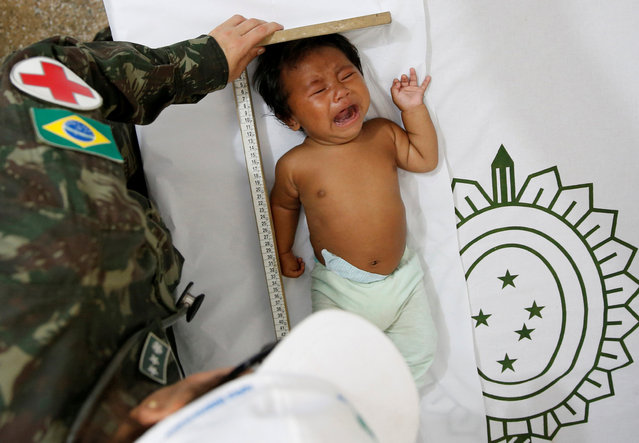 A Brazilian Army soldier gives medical attention to an indigenous baby during a joint military training for humanitarian actions with Colombian, U.S and Peruvian soldiers, in Tabatinga, Brazil November 09, 2017. (Photo by Leonardo Benassatto/Reuters) 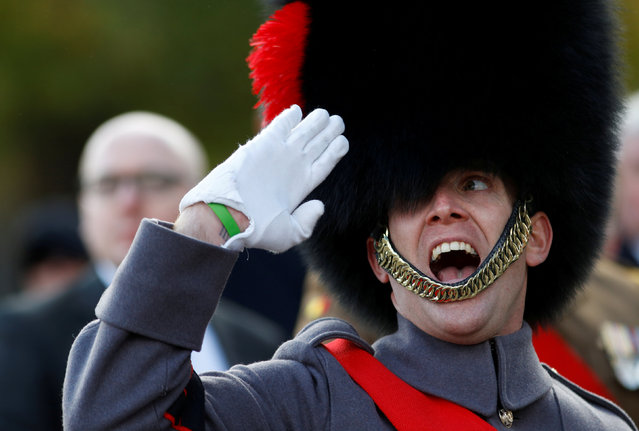 A soldier salutes as he parades past Britain's Prince Edward during the Remembrance Sunday Cenotaph service in London, Britain, November 12, 2017. (Photo by Peter Nicholls/Reuters) 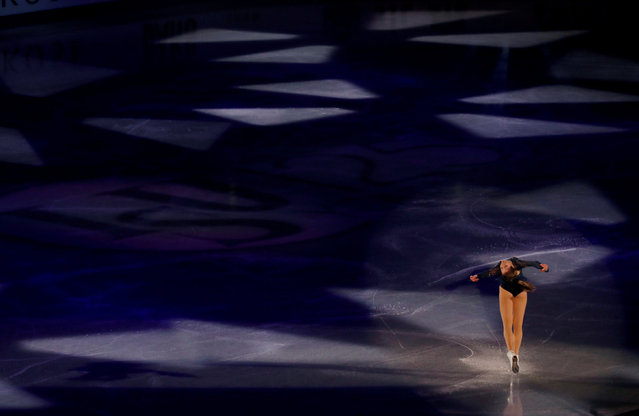 Carolina Kostner of Italy performs in the gala exhibition during the ISU Grand Prix of Figure Skating at Osaka municipal central gymnasium on November 12, 2017 in Osaka, Japan. (Photo by Kim Kyung-Hoon/Reuters) 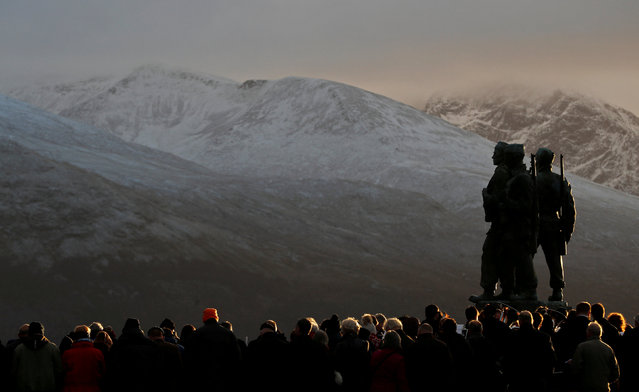 Veterans attend a service of Remembrance at the Commando Memorial at Spean Bridge, Scotland, November 12, 2017. (Photo by Russell Cheyne/Reuters) 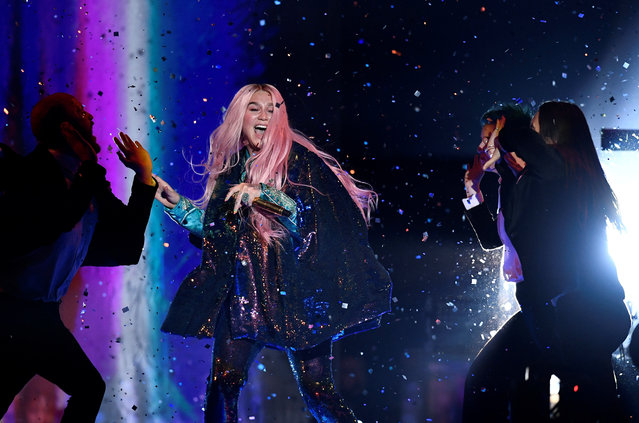 Singer Kesha performs on stage during the MTV EMAs 2017 held at The SSE Arena, Wembley on November 12, 2017 in London, England. (Photo by Dylan Martinez/Reuters) 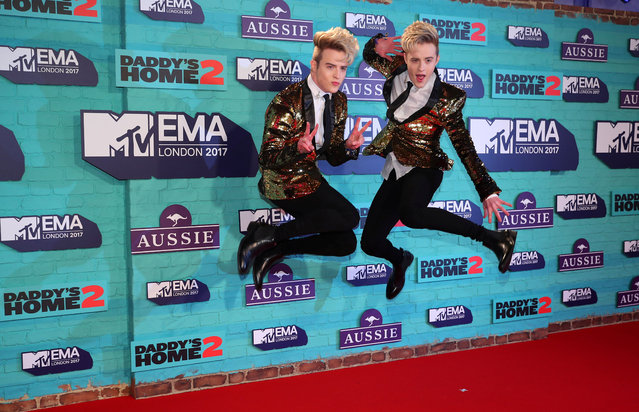 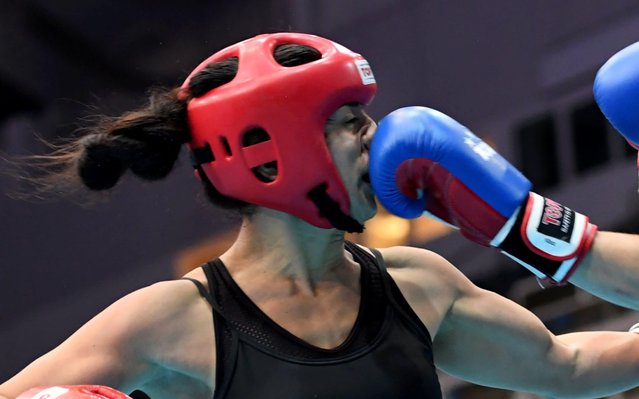 Israel' s Adva Ohayon is beaten by France' s Jeromine Moser (not pictured) in the “Women Low kick -60 kg” category in the “BOK” sports hall in Budapest, on November 7, 2017 during the one- week long “World Association of Kickboxing Organizations” (WAKO) world championships. During this world championship all disciplines of the kick box sport struggle at one place and at the same time. (Photo by Attila Kisbenedek/AFP Photo) The Radio City Rockettes perform the “Parade of the Wooden Soldiers” during the opening day of the 2017 Christmas Spectacular show at New York's Radio City Music Hall in USA on November 10, 2017. (Photo by Enrique Shore/Alamy Live News) 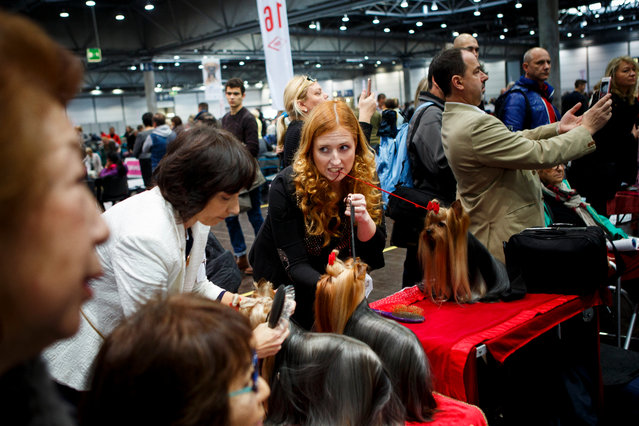 A competitor prepaires the dog of the breed Yorkshire Terrier to present them to a jury at the World Dog Show 2017 on November 11, 2017 in Leipzig, Germany. The five-day show brings together dog lovers and 31,000 dogs from around the world for competitions in different classes as well as events like dog diving and dog dancing. (Photo by Carsten Koall/Getty Images) 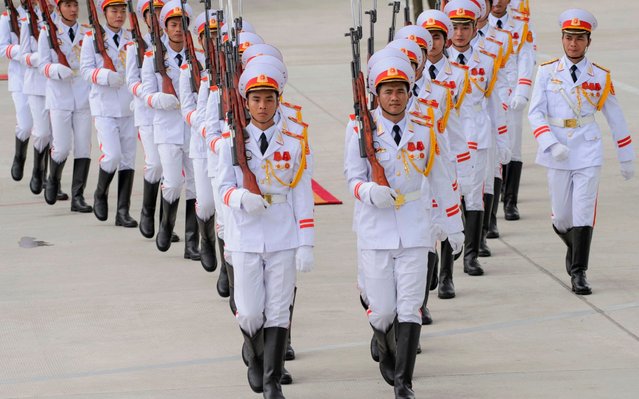 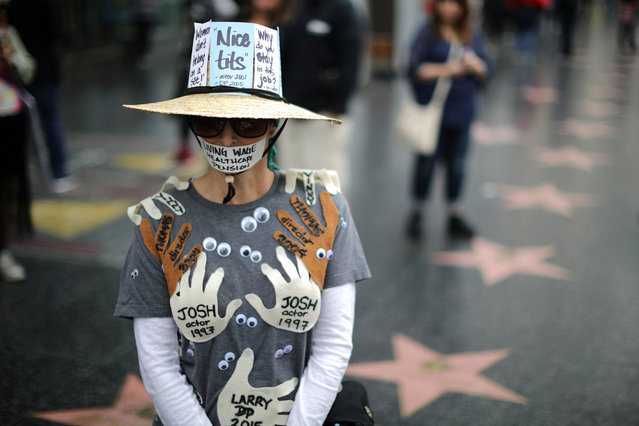 A woman who declined to give her name wears an outfit with the names of all the men in Hollywood who sexually harrassed her during a protest march for survivors of sexual assault and their supporters in Hollywood, Los Angeles, California U.S. November 12, 2017. (Photo by Lucy Nicholson/Reuters) Mercedes' British driver Lewis Hamilton is reflected on windows as he powers his car during the Brazilian Formula One Grand Prix third practice session at the Interlagos circuit in Sao Paulo, Brazil, on November 11, 2017. Hamilton said members of his Mercedes team had guns held to their heads as they were robbed as they left the Interlagos circuit on Friday. “Some of my team were held up at gun point last night leaving the circuit here in Brazil. Gun shots fired, gun held at ones head. This is so upsetting to hear”, world champion Hamilton tweeted. (Photo by Nelson Almeida/AFP Photo) 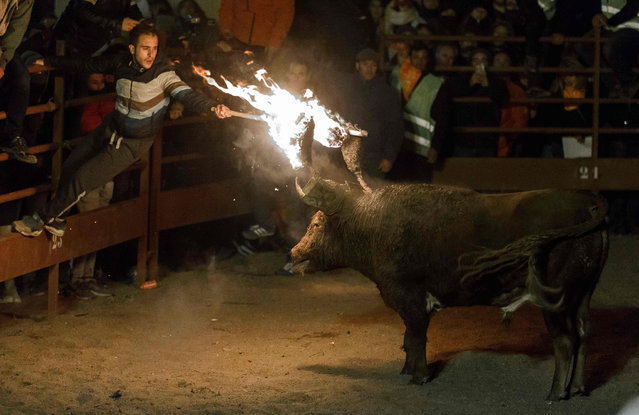 A reveler lights flammable balls attached to a bull' s horns, during the “Toro de Jubilo” (fire bull) festival in Medinaceli near Soria, Spain on November 11, 2017. The Jubilee Bull of Medinaceli is a traditional festive event dating back to the 16 th century in which a bull, covered with mud from the legs to the head to avoid burns, wears on its horns a metal frame (gamella) on which two large balls of fire burn, while the animal is tied to a pole with a rope. (Photo by Cesar Manso/AFP Photo) 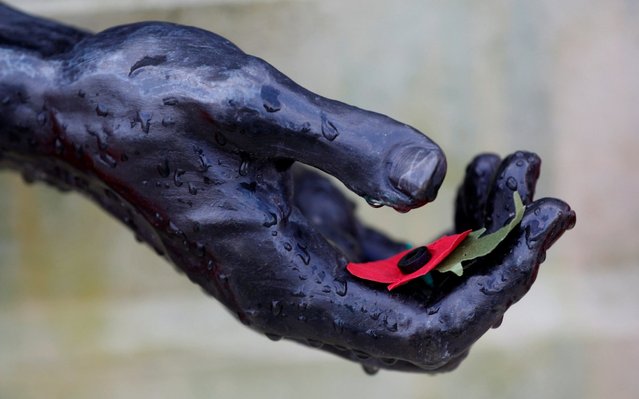 A poppy rests in the hand of a statue during the annual Armistice Day Service at The National Memorial Arboretum on November 11, 2017 in Alrewas, England. (Photo by Darren Staples/Reuters) A participant wears a fantasy costume at the 4th Hero Festival in Marseille, France on November 11, 2017. The 4th Hero Festival edition has attracted all sorts of people to role play their favourite characters from all kinds of movies and comic book legends. (Photo by Jean-Paul Pelissier/Reuters) 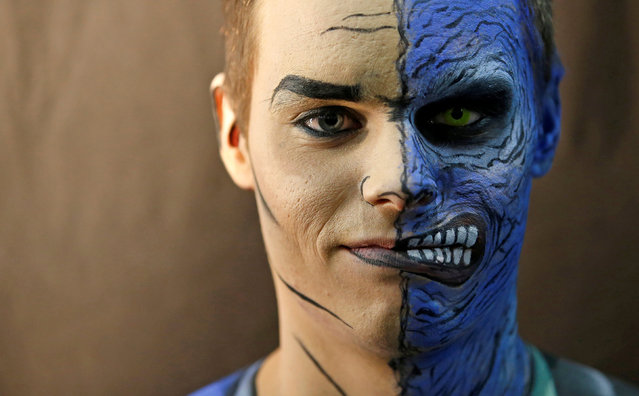 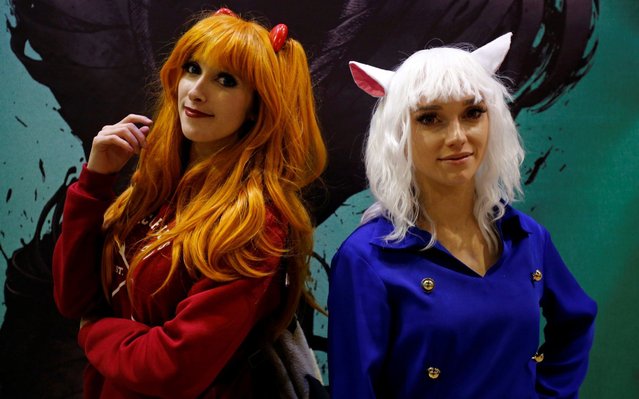