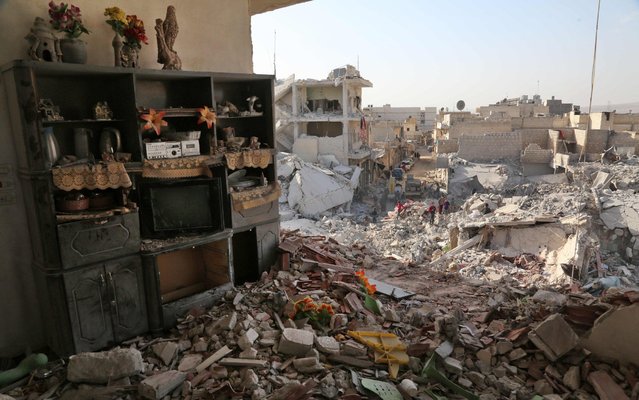 Shelves remain standing amidst the rubble on November 14, 2017 following an air strike the previous day on the northern rebel- held Syrian town of Atareb. Three strikes hit the northern town of Atareb on Monday, the Syrian Observatory for Human Rights said, despite a “de- escalation zone” in place there. (Photo by Zein Al Rifai/AFP Photo) 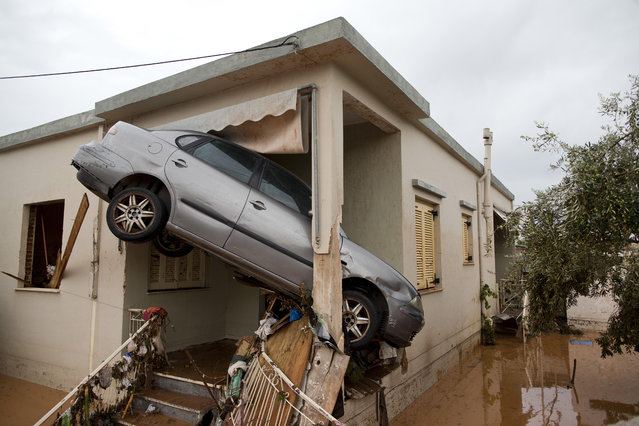 A car at the entrance of a flooded house after the water has receded in the town of Mandra western Athens, on Thursday, November 16, 2017. Greece's fire department says rescue crews are searching for six people reported missing in the western Athens area following major flash flooding that left at least 14 people dead. (Photo by Petros Giannakouris/AP Photo) 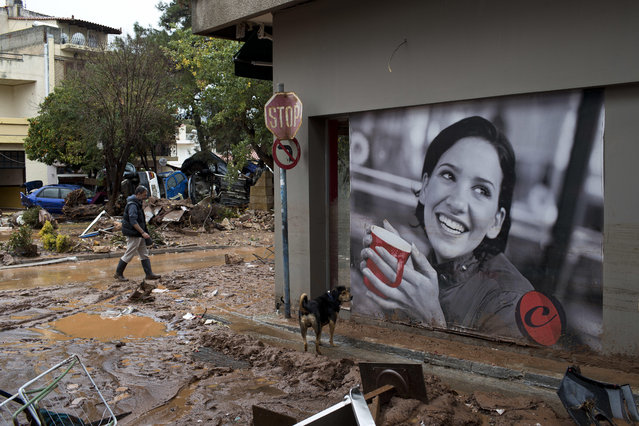 A dog stands as a man walks in front of washed up cars in the town of Mandra western Athens, on Thursday, November 16, 2017. (Photo by Petros Giannakouris/AP Photo) 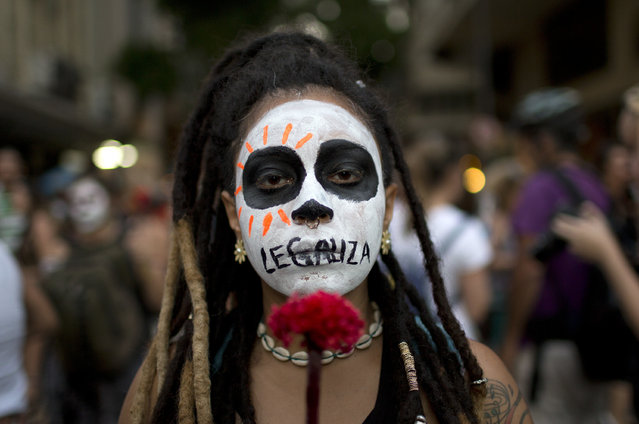 In this Monday, November 13, 2017 photo, a woman with the word “Legalize” painted across her mouth marches against a recent congressional committee vote to make abortion illegal without exception nationwide, in Rio de Janeiro, Brazil. Abortion is currently allowed in cases of rape, a pregnancy that threatens a woman's life or a fetus with anencephaly, but the committee adopted a measure that would remove those exceptions. (Photo by Silvia Izquierdo/AP Photo) 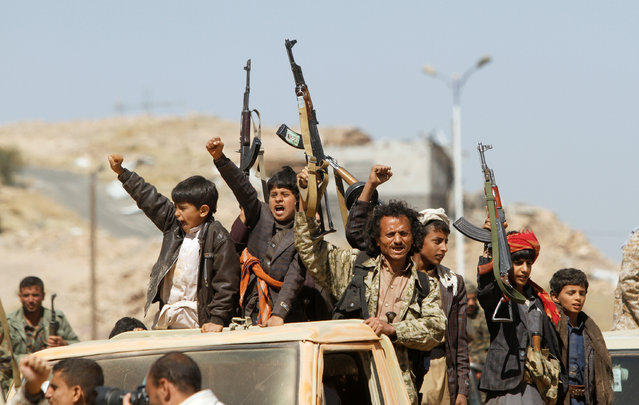 Newly recruited Houthi fighters ride in a truck before heading to the frontline to fight government forces in Sana’a, Yemen on November 15, 2017. (Photo by Mohamed al-Sayaghi/Reuters) 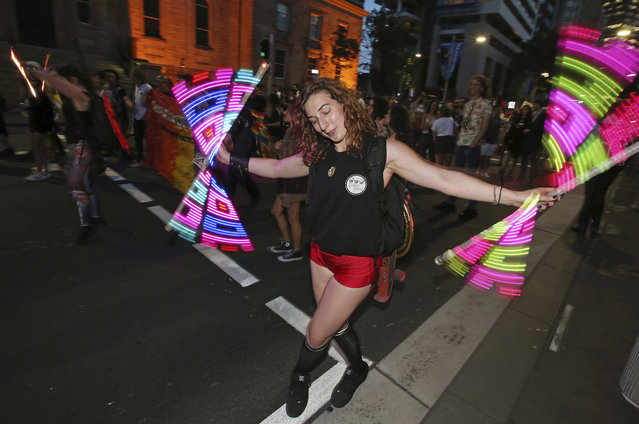 In this November 15, 2017, file photo, a woman twirls lights as members of the gay community and their supporters celebrate the result of a postal survey calling for gay marriage right in Sydney. Australians supported gay marriage in a postal survey that ensures Parliament will consider legalizing same-s*x weddings this year. (Photo by Rick Rycroft/AP Photo) 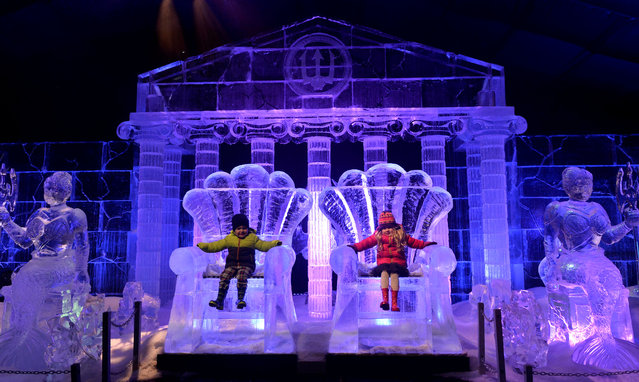 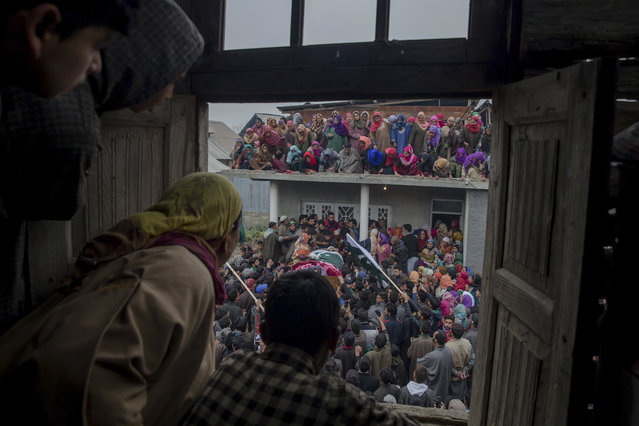 In this November 14, 2017, file photo, Kashmiri villagers watch from a window of a residential house as people carry the body of Ashiq Ahmed Bhat, a local rebel during his funeral in Palhalan, some 35 kilometers (22 miles) north of Srinagar, Indian controlled Kashmir. A pair of gunbattles have left three rebels and an Indian army soldier dead in the disputed Himalayan region of Kashmir, police said on Tuesday. (Photo by Dar Yasin/AP Photo) 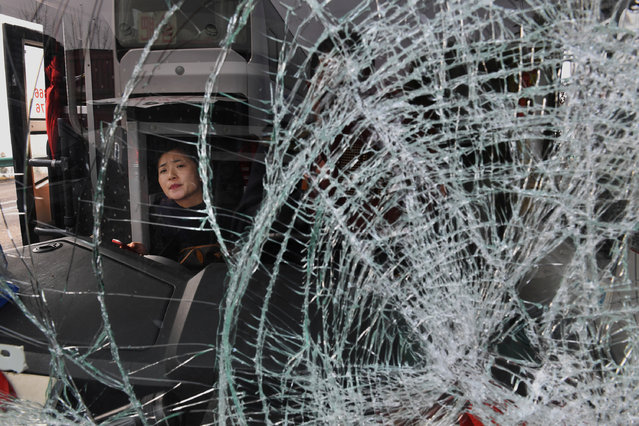 A woman looks on from a vehicle after a pile-up accident on an expressway section in Fuyang city, Anhui province, China on November 15, 2017. (Photo by Reuters/China Stringer Network) 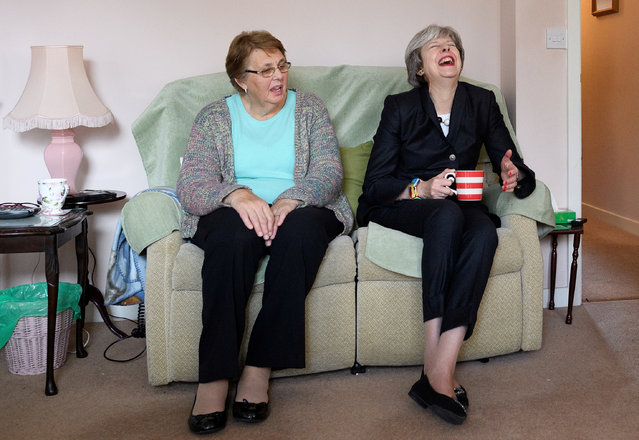 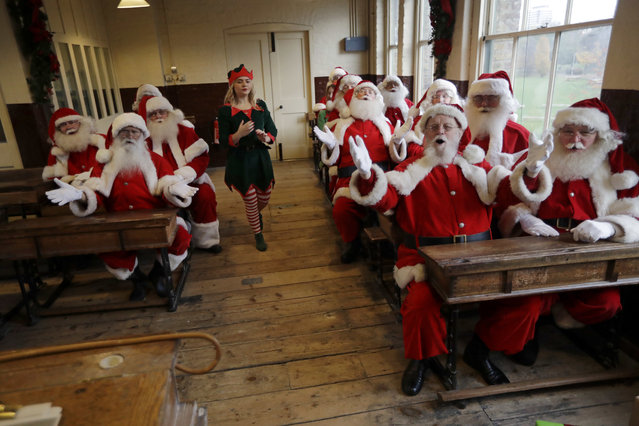 Performers dressed as Santa Claus take part in a posed classroom photocall for the media for the Ministry of Fun Santa School at the Ragged School Museum in east London, Thursday, November 16, 2017. The Ministry of Fun Santa School is Britain's only genuine training school for professional Santas, preparing them to help out in grottos, department stores, attractions and events over the Christmas period. (Photo by Matt Dunham/AP Photo) 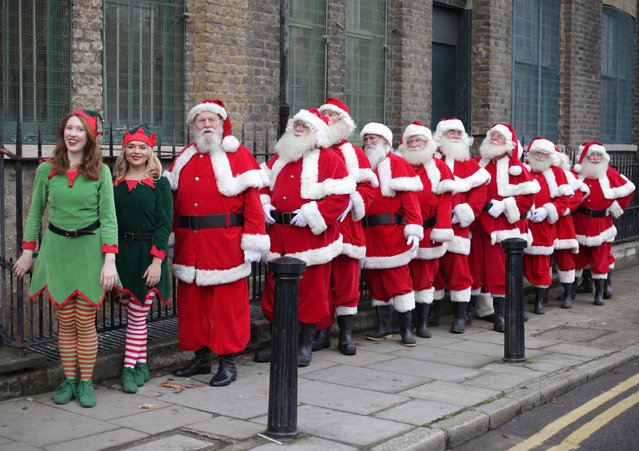 Father Christmas and Elf performers take part in a posed classroom photocall for the media for the Ministry of Fun Santa School at the Ragged School Museum in east London, Thursday, November 16, 2017. (Photo by Yui Mok/PA Wire) 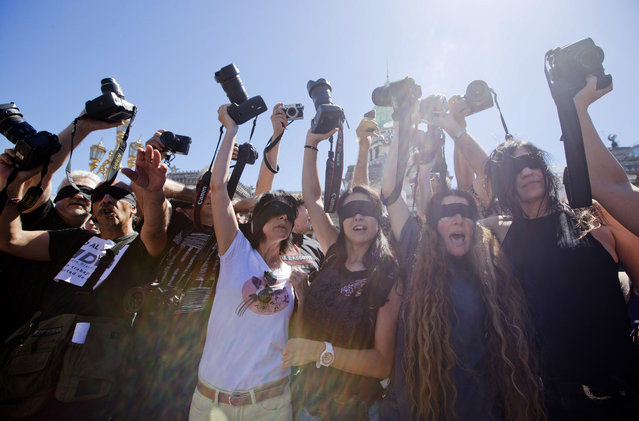 In this Tuesday, November 14, 2017 photo, photojournalists raise their cameras to protest the closing of the news agency Diarios y Noticias, better known as DyN, outside the National Congress, in Buenos Aires, Argentina. Blindfolded, the photojournalists rallied outside the government building to protest the closure of the news agency. Under the slogan: “Without work there is no freedom of expression”, they asked the authorities to promote a law to declare a labor emergency for the communication companies, and suspend dismissals for six months. (Photo by Victor R. Caivano/AP Photo) 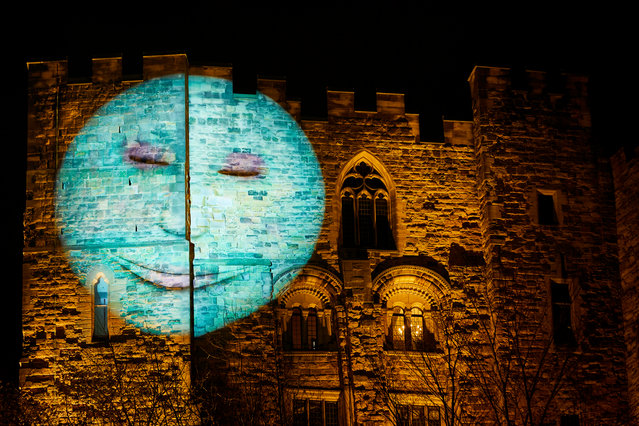 A light art installation entitled “Our Moon” by artist Hannah Fox is projected onto the walls of Durham Castle and features as part of Lumiere Durham light festival in Durham, northern England on November 15, 2017. The biennial Lumiere Durham festival brings together international light artists to create installations all across Durham city centre. (Photo by Christopher Thomond/The Guardian) 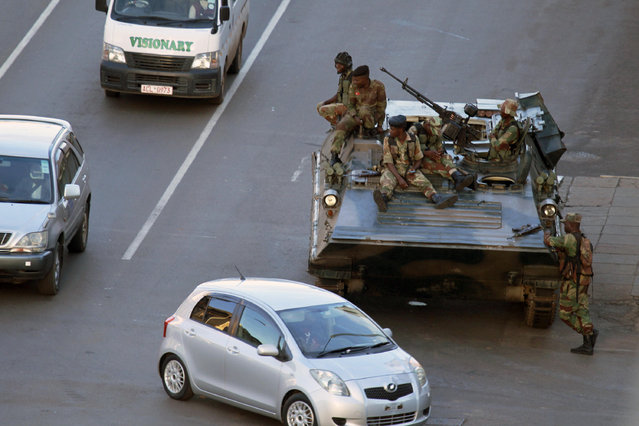 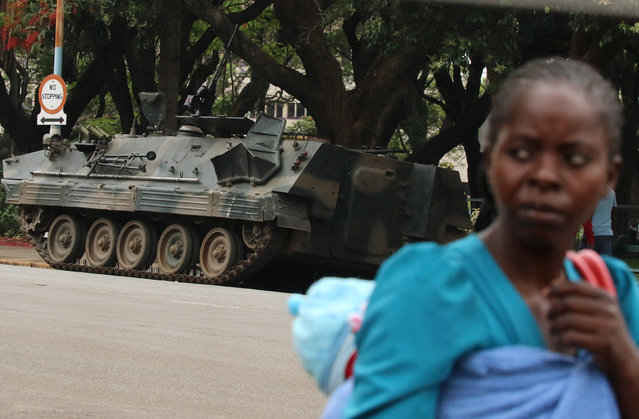 An armoured vehicle outside the parliament building in Harare, Zimbabwe, Wednesday, November 15, 2017. (Photo by Philimon Bulawayo/Reuters) 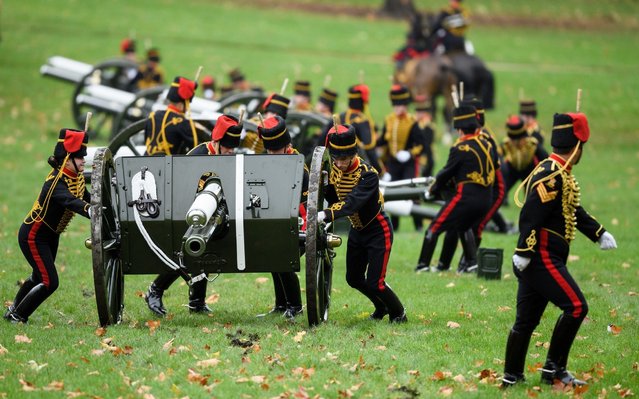 Members of the King's Troop Royal Horse Artillary prepare the guns ahead of a 41-gun salute to mark the 69th birthday of the Prince of Wales at Green Park on November 14, 2017 in London, England. Six First World War-era 13 pounder Field Guns were used to fire the salute, while another gun salute took place at the Tower of London. (Photo by Leon Neal/Getty Images) 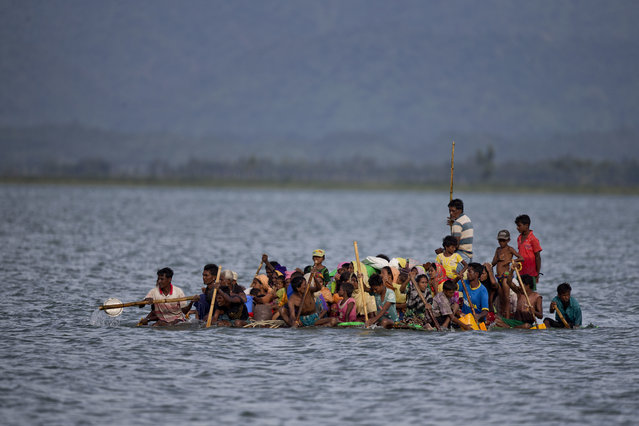 In this Sunday, November 12, 2017, file photo, Rohingya Muslims use a makeshift raft made with plastic containers to cross the Naf river from Myanmar into Bangladesh, near Shah Porir Dwip, Bangladesh. (Photo by A.M. Ahad/AP Photo) 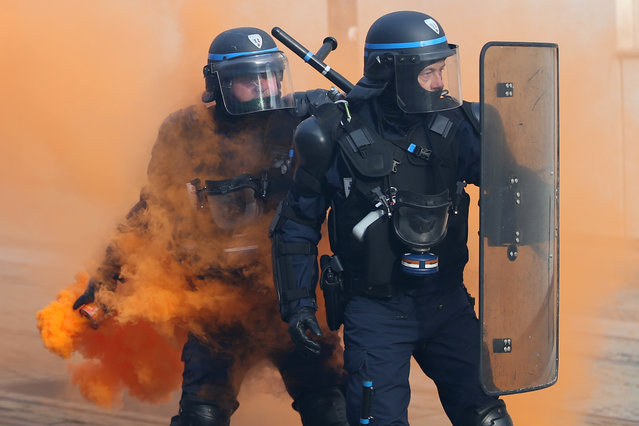 French CRS riot police face off with protestors during a demonstration against French government reforms in Nantes, France, November 16, 2017. (Photo by Stephane Mahe/Reuters) 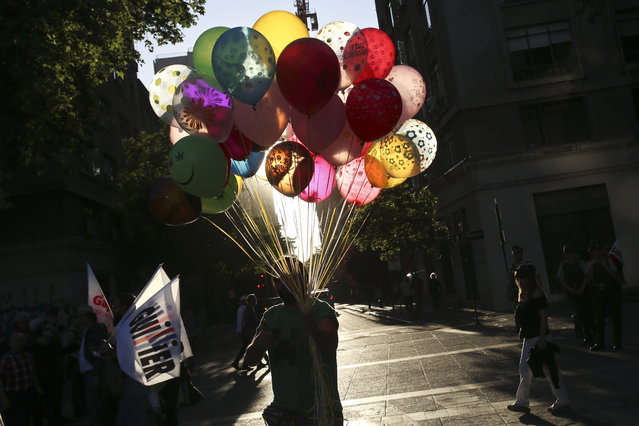 A balloon seller walks past people on their way to the closing rally for presidential candidate Alejandro Guillier, from the Nueva Mayoria coalition, in Santiago, Chile, Thursday, November 16, 2017. Chile will hold presidential and congressional elections on Sunday. (Photo by Esteban Felix/AP Photo) 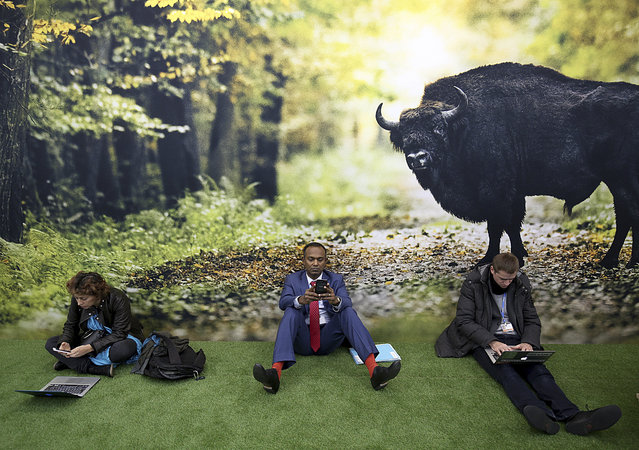 Participants sit on the floor in front of a poster during a break at the UN Climate Conference COP23 in Bonn, Germany, Thursday, Noember. 16, 2017. (Oliver Berg/DPA via AP Photo) 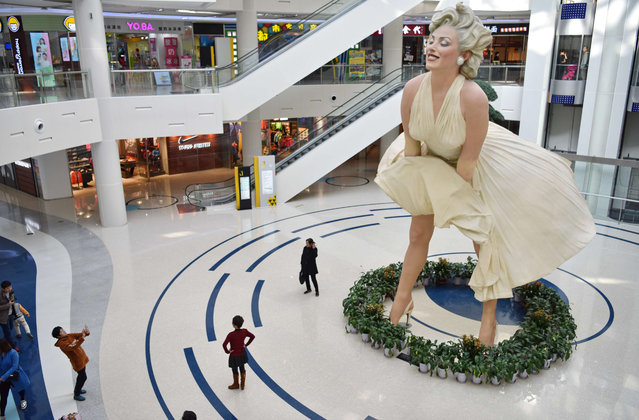