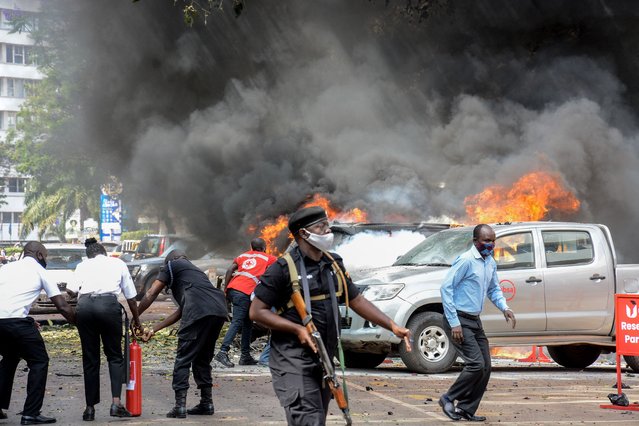 People extinguish fire on cars caused by a bomb explosion near Parliament building in Kampala, Uganda, on November 16, 2021. Two explosions hit Uganda's capital Kampala on November 16, 2021, injuring a number of people in what police termed an attack on the city, the latest in a string of blasts targeting the country. The explosions occurred in the central business district of Kampala near the central police station and the entrance to parliament, police said. (Photo by Ivan Kabuye/AFP Photo) 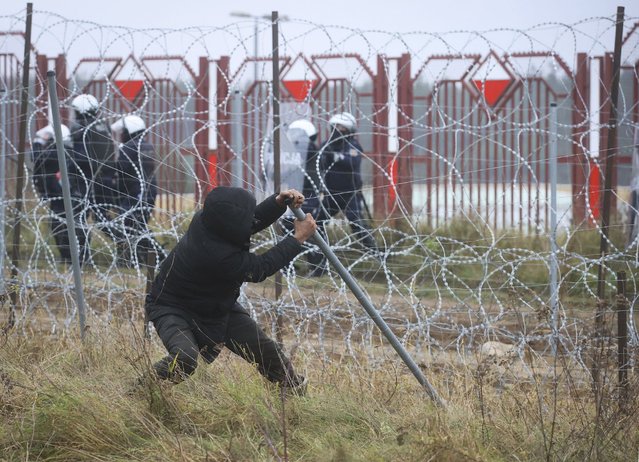 A man pulls down the fence during clashes with Polish border guards at the Belarus-Poland border near Grodno, Belarus, on Tuesday, November 16, 2021. Polish border forces say they were attacked with stones by migrants at the border with Belarus and responded with a water cannon. The Border Guard agency posted video on Twitter showing the water cannon being directed across the border at a group of migrants in a makeshift camp. (Photo by Leonid Shcheglov/BelTA via AP Photo) 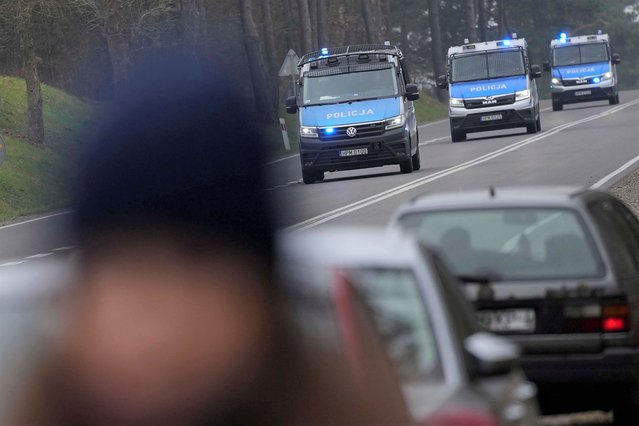 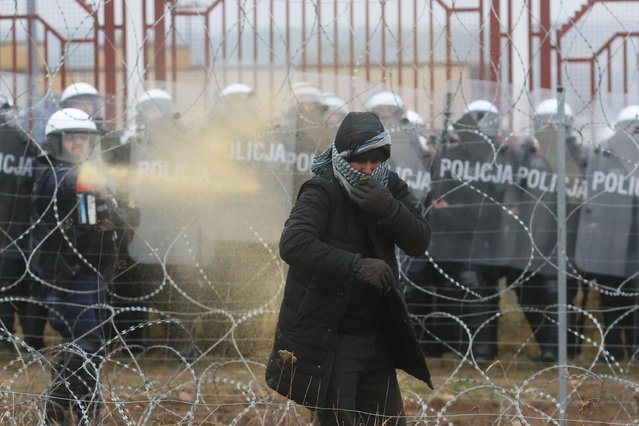 A Polish law enforcement officer uses tear gas, as migrants attempt to cross the Belarusian-Polish border at Bruzgi – Kuznica checkpoint in the Grodno region, Belarus on November 16, 2021. (Photo by Leonid Scheglov/BelTA/Handout via Reuters) 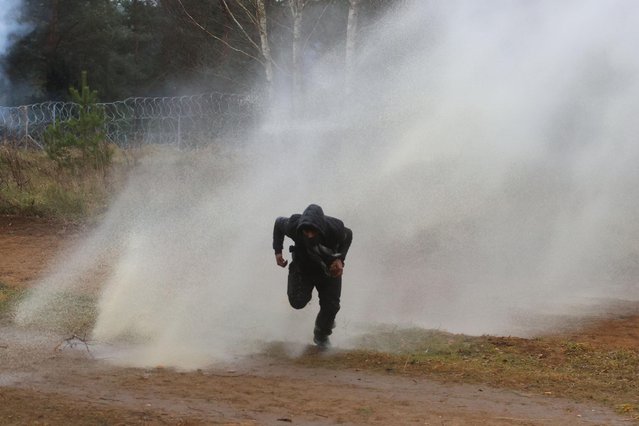 A man runs away from a water cannon used by Polish law enforcement officers, as migrants attempt to cross the Belarusian-Polish border at Bruzgi – Kuznica checkpoint in the Grodno region, Belarus on November 16, 2021. (Photo byu Leonid Scheglov/BelTA/Handout via Reuters) 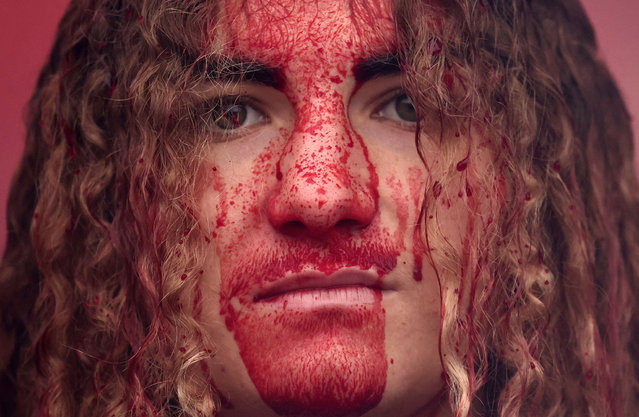 An Extinction Rebellion activist covered with fake blood attends a protest as part of the campaign “Devuelvan la tierra – Make the land” with the political and spiritual authorities of the indigenous Yukpa people of Colombia in front of the Colombian Ambassador's Residence in Paris, France, November 16, 2021. (Photo by Sarah Meyssonnier/Reuters) 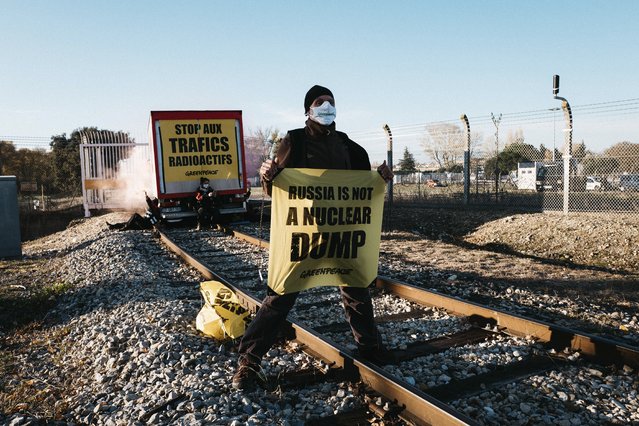 A Greenpeace activist holds a banner during an attempt to block a railway access in southern France where Greenpeace say a convoy of reprocessed uranium is due to leave to be exported to Russia, in Pierrelate, southern France, Tuesday, November 16, 2021. The railway access is located in Pierrelatte, just outside the Orano plant where radioactive material is processed and stored. (Photo by Mait Baldi/Greenpeace via AP Photo) 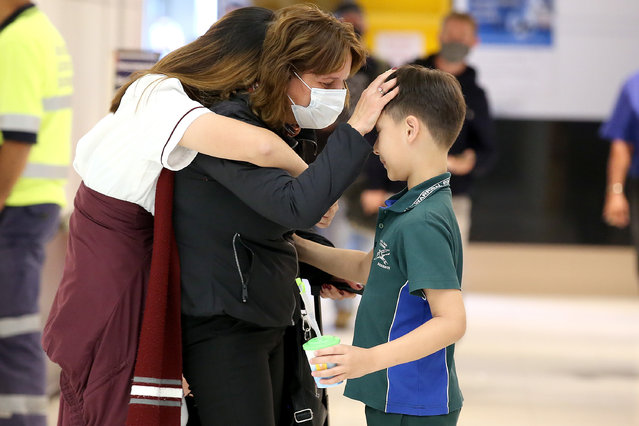 A mother is reunited with her children after 8 months, as travellers from Sydney arrive at Brisbane Airport in Brisbane, Tuesday, November 16, 2021. Home quarantine is being offered to domestic arrivals from COVID-19 hotspots now that more than 70 per cent of Queenslanders are fully vaccinated. (Photo by Jono Searle/AAP Image) 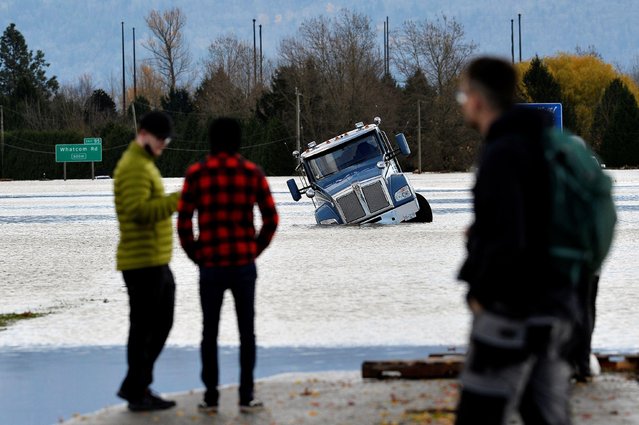 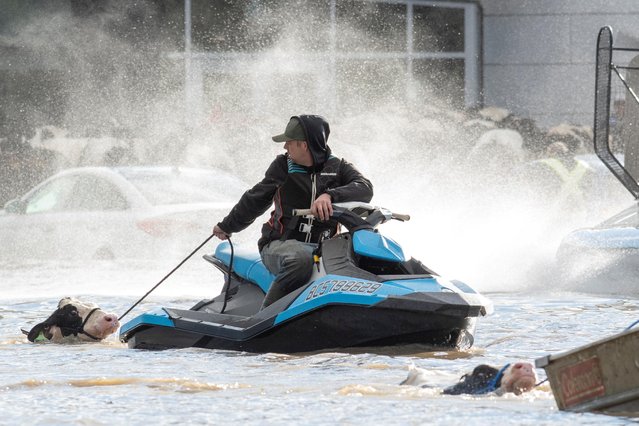 Cows that were stranded in a flooded barn are rescued by people in boats and a sea doo after rainstorms lashed the western Canadian province of British Columbia, triggering landslides and floods, and shutting highways, in Abbotsford, Canada on November 16, 2021. (Photo by Jennifer Gauthier/Reuters) 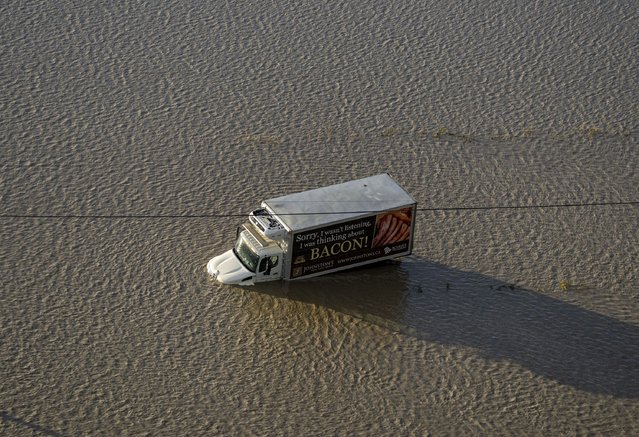 A truck is stranded along a flooded road in Abbotsford, British Columbia, Tuesday, November 16, 2021. (Photo by Jonathan Hayward/The Canadian Press via AP Photo) 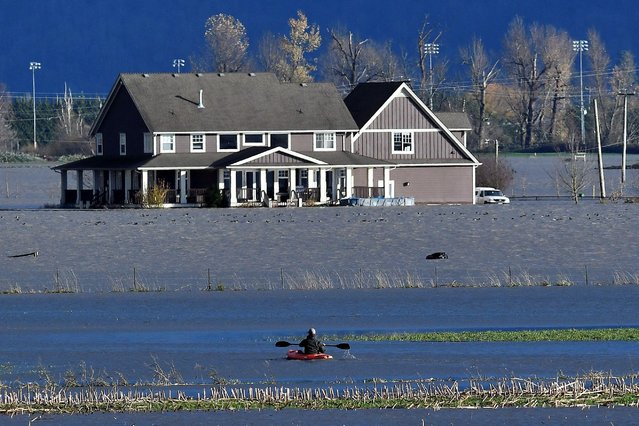 A paddler kayaks on a flooded stretch of farmland after rainstorms lashed the western Canadian province of British Columbia, triggering landslides and floods and shutting highways, in Abbotsford, British Columbia, Canada November 16, 2021. (Photo by Jennifer Gauthier/Reuters) 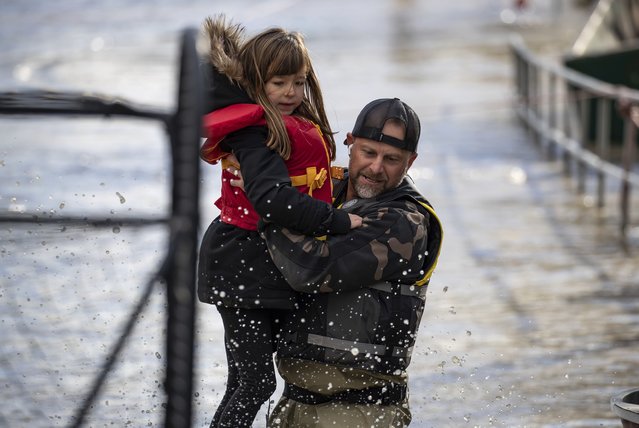 A volunteer carries a young girl to high ground after using a boat to rescue a woman and children who were stranded by high water due to flooding in Abbotsford, British Columbia on Tuesday, November 16, 2021. Officials in a small city near the Canada border are calling the damage devastating after a storm that dumped rain for days caused flooding and mudslides. City officials in Sumas, Washington said Tuesday that hundreds of people had been evacuated and estimated that 75% of homes had water damage. Just over the border, residents in about 1,100 rural homes in Abbotsford were told to evacuate as waterways started to rise quickly. (Photo by Darryl Dyck/The Canadian Press via AP Photo) 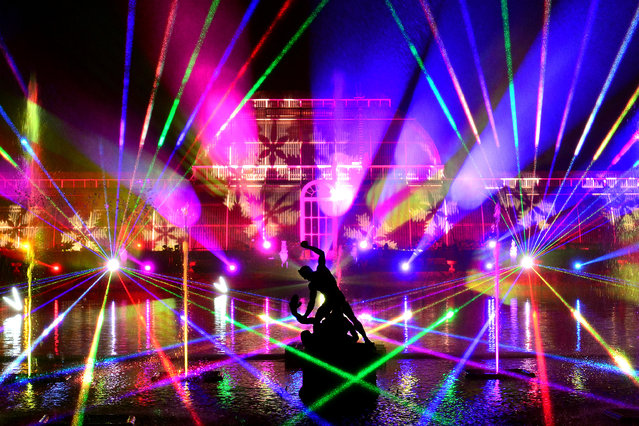 The Palm House at Kew Gardens is illuminated with a light show during a preview for the Christmas at Kew event on November 16, 2021 in London, England. (Photo by Jim Dyson/Getty Images) 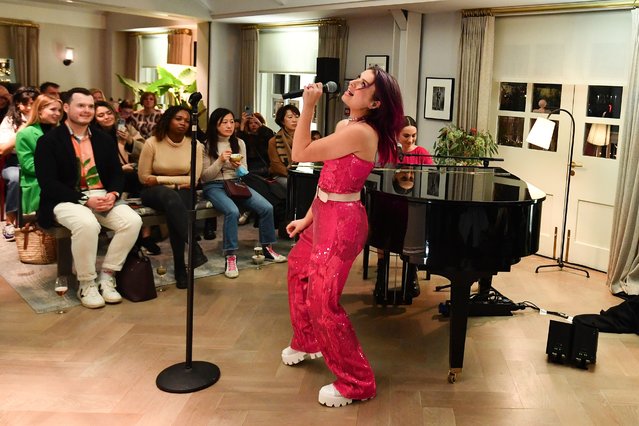 Having enjoyed unprecedented viral success, Tiktok sensations Abigail Barlow and Emily Bear bring their acclaimed musical, inspired by the original series “Bridgerton”, to Bicester Village, an open air shopping destination in the heart of Oxfordshire for the LA-based duo's first live performance in the UK on November 16, 2021. (Photo by Jeff Spicer/Getty Images for Bicester Village) 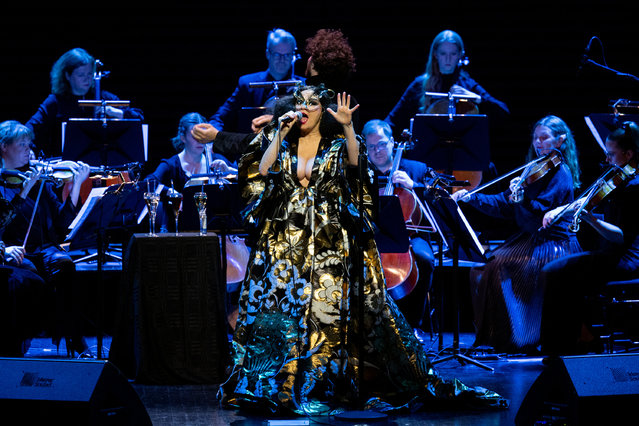 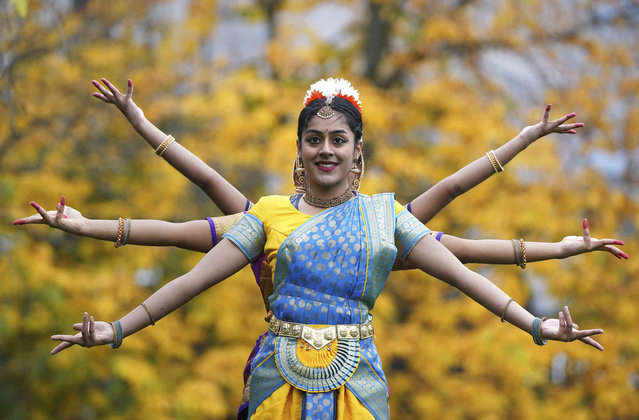