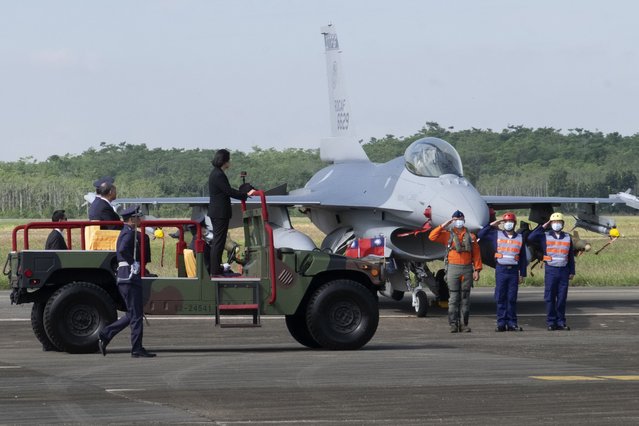 Taiwan's President Tsai Ing-wen inspects newly commissioned upgraded F-16V fighter jets at Air Force base in Chiayi in southwestern Taiwan Thursday, November 18, 2021. Taiwan has deployed the most advanced version of the F-16 fighter jet in its Air Force, as the island steps up its defense capabilities in the face of continuing threats from China. (Photo by Johnson Lai/AP Photo) 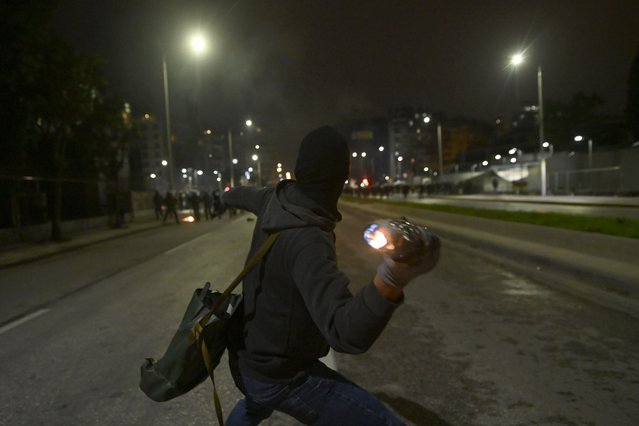 A hooded youth throws a molotov cocktail to riot police during clashes in the northern city of Thessaloniki, Greece, Wednesday, November 17, 2021. Some 14,000 people marched peacefully through Greece's second-largest city of Thessaloniki on Wednesday to mark the anniversary of a bloody anti-dictatorship uprising in 1973, but afterwards masked youths threw petrol bombs at police who responded with tear gas and a water cannon. (Photo by Giannis Papanikos/AP Photo) 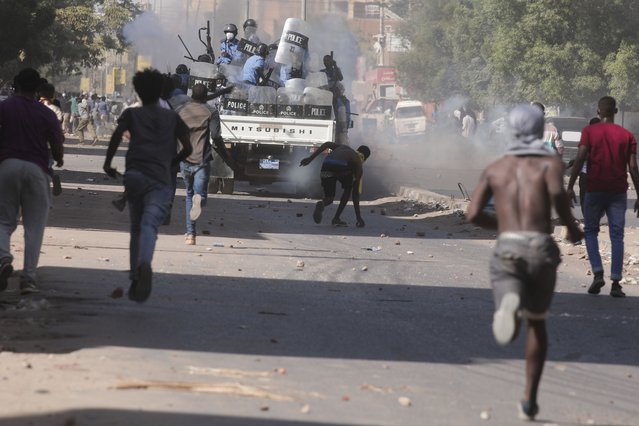 Sudanese confront the police during a protest against the military coup that ousted government last month, in Khartoum, Sudan, Wednesday, November 17, 2021. Prime Minister Abdalla Hamdok is currently under house arrest in the capital of Khartoum. He and more than 100 other government officials were detained during the coup. Many have been kept in undisclosed locations. (Photo by Marwan Ali/AP Photo) 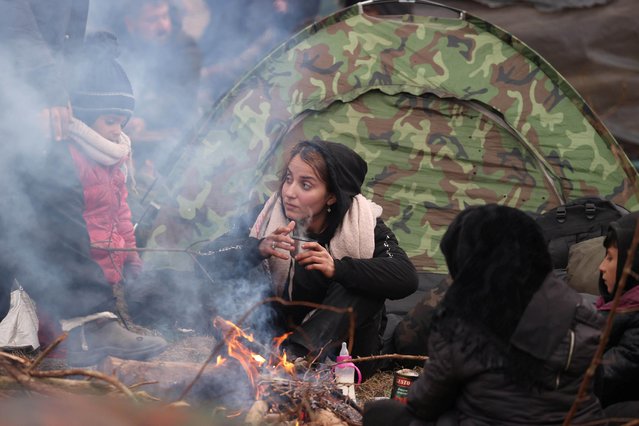 Migrants in a tent camp on the Belarusian-Polish border in Grodno Region, Belarus on November 17, 2021. The crisis on the border of Belarus with Poland, Lithuania, and Latvia, migrants' popular destinations throughout this year, escalated on November 8. A large migrant group spent over two hours throwing stones and other items at Polish border guards at the Kuznica – Bruzgi crossing on November 16, with teargas and stun grenades used in response, shots fired. (Photo by Maxim Guchek/BelTA/TASS) 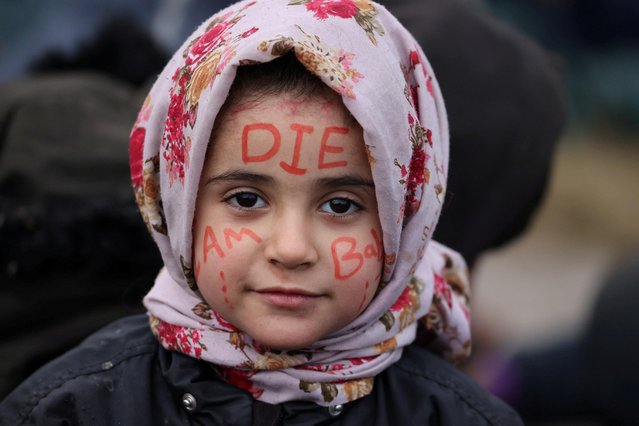 A child in a migrants' tent camp on the Belarusian-Polish border in Grodno Region, Belarus on November 17, 2021. (Photo by Maxim Guchek/BelTA/TASS) 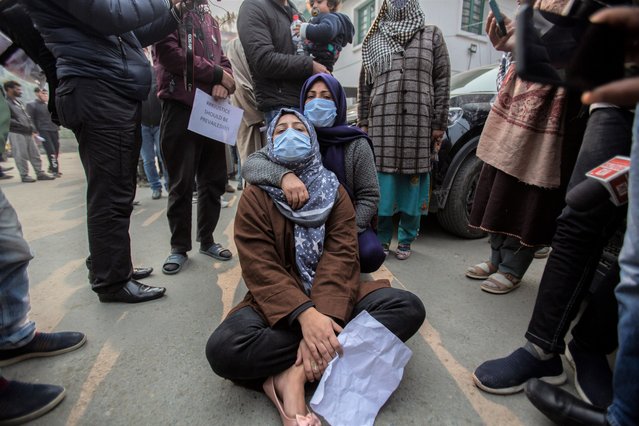 Family members and friends of two civilians who were killed in a gunfight, hold a protest, in Srinagar, Indian controlled Kashmir, Wednesday, November 17, 2021. Dozens of relatives of two civilians killed in a controversial gunfight in Indian-controlled Kashmir staged a protest in the disputed region’s main city on Wednesday, pleading authorities to return the bodies of the slain so that they could bury them as per their wishes. (Photo by Mukhtar Khan/AP Photo) 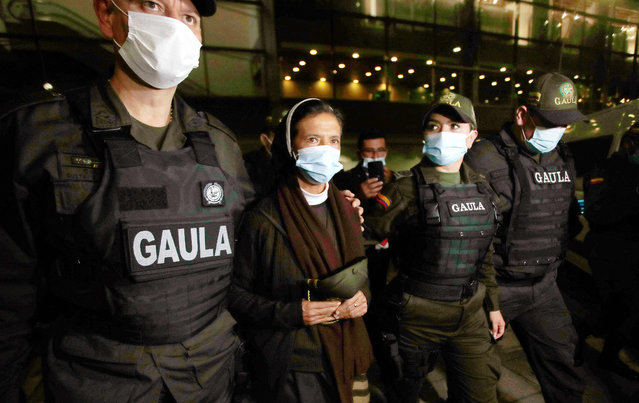 Colombian nun Gloria Cecilia Narvaez is escorted by Colombian police officers upon her arrival at El Dorado international airport in Bogota, on November 16, 2021. Narvaez was kidnapped in February, 2017 by Mali jihadists and liberated past October. (Photo by Daniel Munoz/AFP Photo) 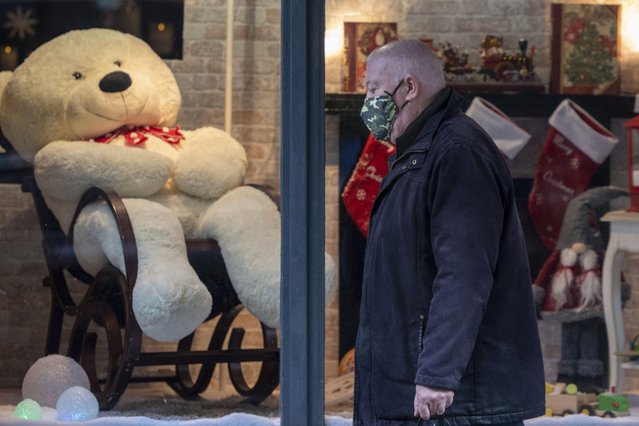 A man wears a face mask to curb the spread of coronavirus as he walks past a shop with Christmas decorations in Brussels, Belgium, Wednesday, November 17, 2021. Belgium reimposed an extended use of facemasks and mandatory remote work in an attempt to contain a new surge of COVID-19 cases. Prime Minister Alexander De Croo said that the use of facemasks indoors would be lowered to the x-plus age group and that remote work would be made mandatory for all for x days in the 5-day workweek until Christmas. (Photo by Olivier Matthys/AP Photo) 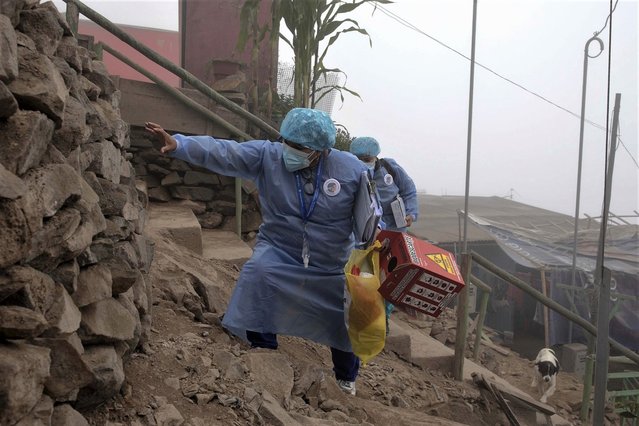 Health workers walk with coolers containing doses of the Pfizer COVID-19 vaccine as part of a a door-to-door vaccination campaign at Villa Maria del Triunfo district in the outskirts of Lima, Peru, Tuesday, November 16, 2021. (Photo by Guadalupe Pardo/AP Photo) 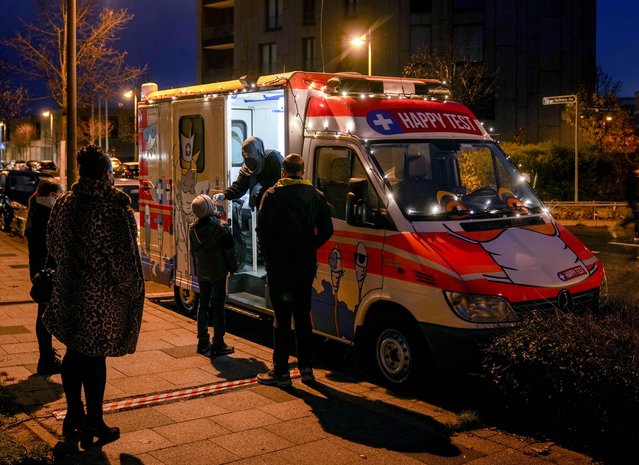 A medical worker carries out a rapid test in a test mobile in Frankfurt, early Wednesday, November 17, 2021. Numbers of the coronavirus infections in Germany reached a new record high on Wednesday. (Photo by Michael Probst/AP Photo) 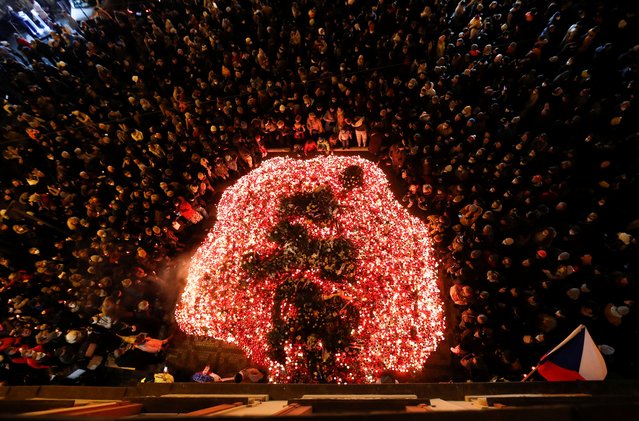 People light candles at the Velvet Revolution memorial during the commemoration of the 32nd anniversary of the 1989 Velvet Revolution in Prague, Czech Republic, November 17, 2021. (Photo by David W. Cerny/Reuters) 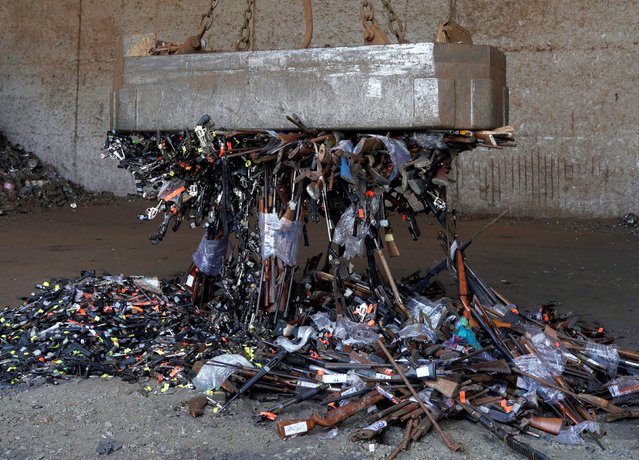 A lifting electromagnet transports weapons to be destroyed in a furnace during a news conference where Ecuador's Armed Forces presented over 4000 weapons voluntarily surrendered or confiscated in raids, in Guayaquil, Ecuador on November 16, 2021. (Photo by Santiago Arcos/Reuters) 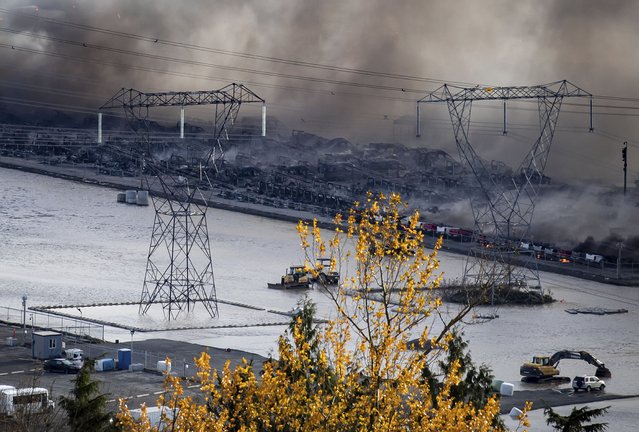 Burnt truck and recreational vehicles are seen during a fire at a business surrounded by floodwaters in Abbotsford, British Columbia, on Wednesday, November 17, 2021. (Photo by Darryl Dyck/The Canadian Press via AP Photo) 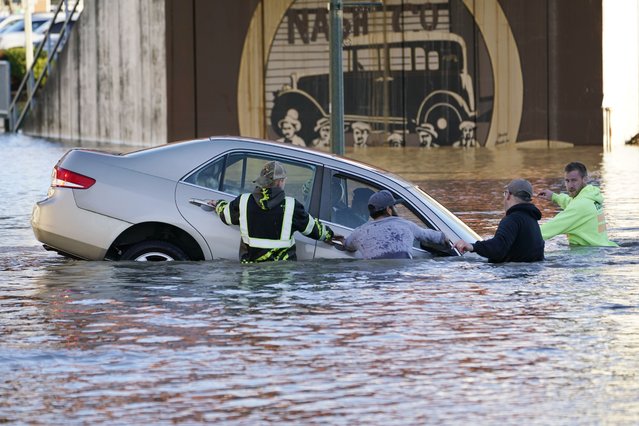 Passersby surround a car whose driver went past a barricade and into the flooded Nooksack River, Tuesday, November 16, 2021, in Ferndale, Wash. About a half-dozen citizens went into the river, where they stopped the car from floating further and muscled it back onshore. No one was injured. An atmospheric river – a huge plume of moisture extending over the Pacific and into Washington and Oregon – caused heavy rainfall in recent days, bringing major flooding in the area. (Photo by Elaine Thompson/AP Photo) 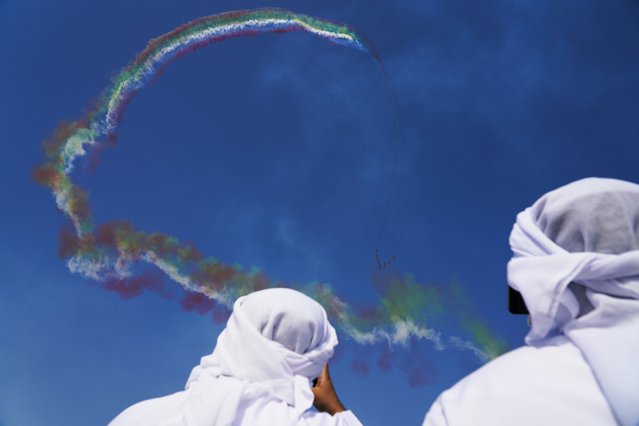 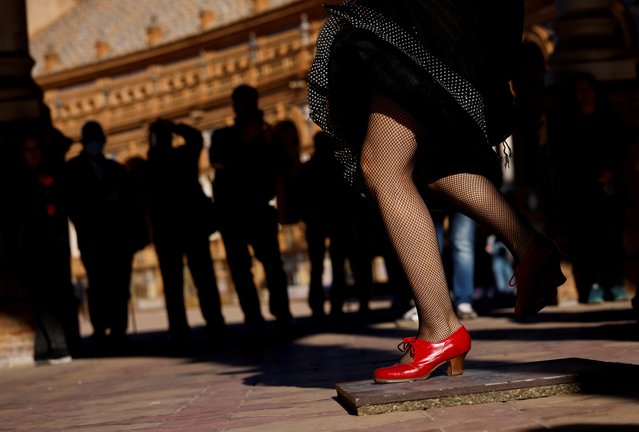 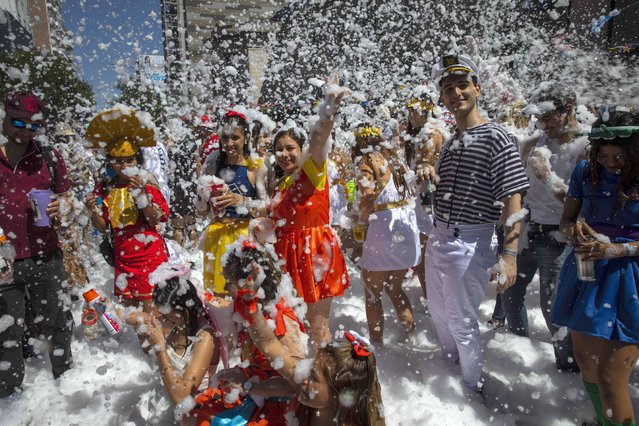 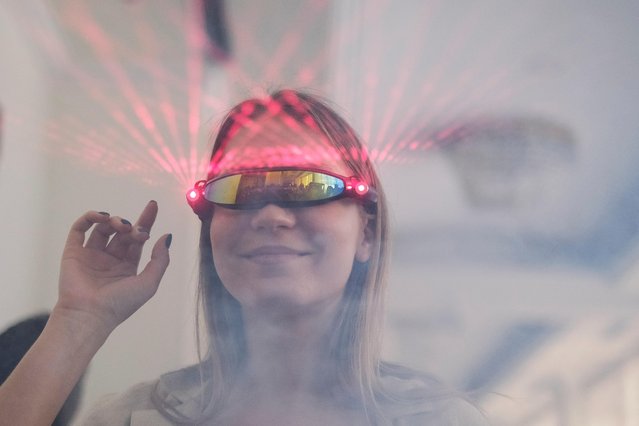 A Bitcoin enthusiast tries a pair of sunglasses that emits laser beams, which is part of the “laser eyes” trend among the cryptocurrency community, during the launch of Adopting Bitcoin – A Lightning Summit in El Salvador, in San Salvador, El Salvador on November 16, 2021. (Photo by Jose Cabezas/Reuters) 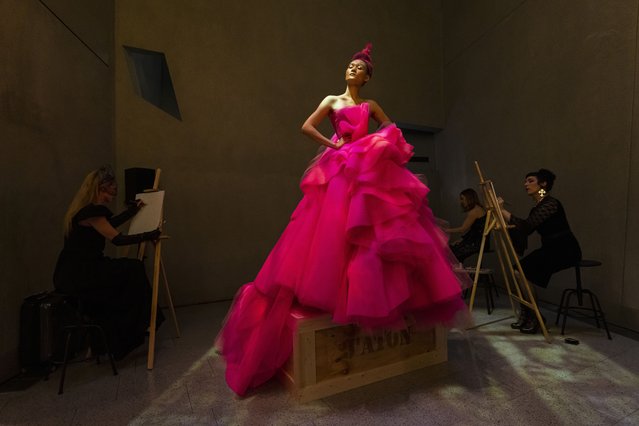