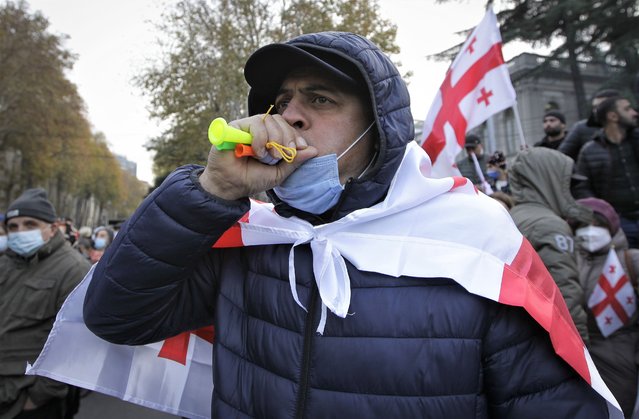 A demonstrators attends a rally in support of former President Mikheil Saakashvili in Tbilisi, Georgia, Friday, November 19, 2021. Several thousand people have rallied in the Georgian capital of Tbilisi, demanding that authorities in the ex-Soviet nation transfer the jailed ex-president to a civilian hospital amid reports that his health is deteriorating after weeks of being on a hunger strike. (Photo by Shakh Aivazov/AP Photo) 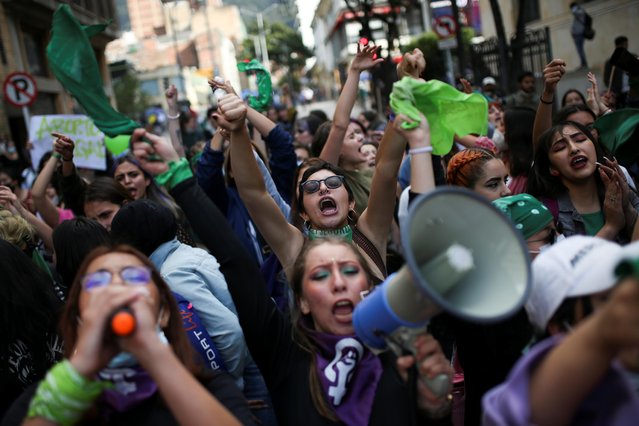 Women demonstrate in front of Colombia's constitutional court in support of removing abortion from the penal code, in Bogota, Colombia on November 18, 2021. (Photo by Luisa Gonzalez/Reuters) 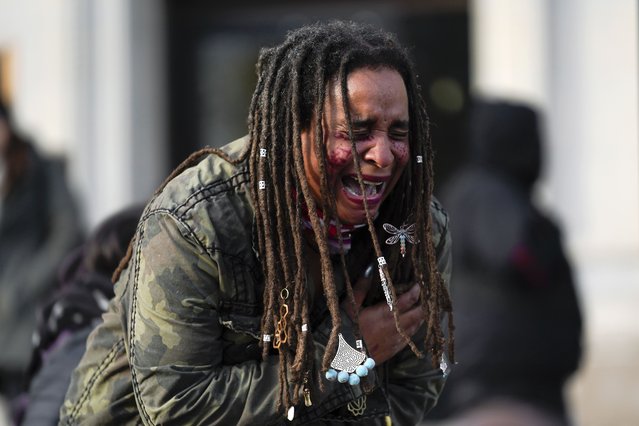 A woman recites poetry outside the Kenosha County Courthouse, Friday, November 19, 2021, in Kenosha, Wis. Kyle Rittenhouse was acquitted of all charges after pleading self-defense in the deadly Kenosha shootings that became a flashpoint in the nation's debate over guns, vigilantism and racial injustice. (Photo by Paul Sancya/AP Photo) 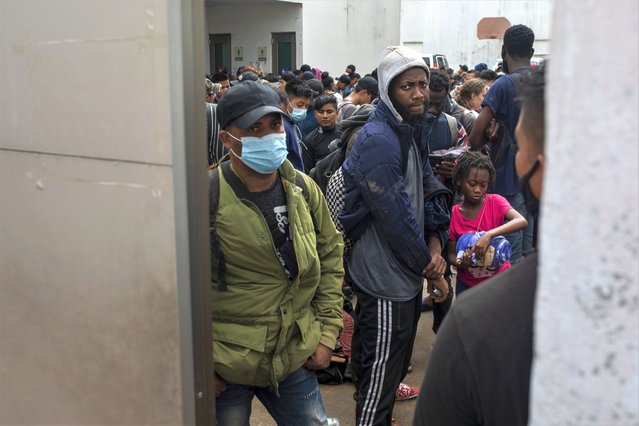 Migrants crowd into the patio at the Attorney Generals office after they were intercepted from inside cargo trailers driving on the highway, in Coatzacoalcos, Veracruz state, Mexico, Friday, November 19, 2021. About 500 migrants were riding in two cargo trucks when they were stopped and detained by the Criminal Investigation Agency and the National Immigration Institute, according to those two organizations. (Photo by Felix Marquez/AP Photo) 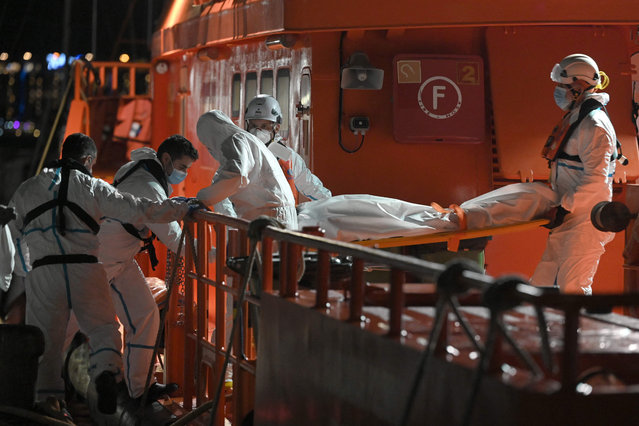 Emergency personnel disembark the body of a deceased migrant in the port of Arguineguin, after their rescue at the coast of the Canary island of Gran Canaria, Spain, on November 18, 2021. Migrant crossings from North Africa into Spain have surged this year, with many people risking their lives on dangerous boat journeys across the Mediterranean. Some 16,827 migrants have arrived in the Canaries between January and October, an increase of 44 percent from the same period a year ago, according to Spain's interior ministry. (Photo by Lluis Gene/AFP Photo) 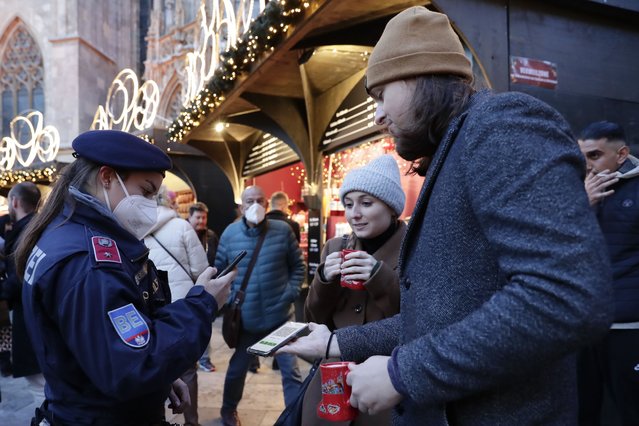 A police officer checks the vaccination status of visitors during a patrol on a Christmas market in Vienna, Austria, Friday, November 19, 2021. Austrian Chancellor Alexander Schallenberg says the country will go into a national lockdown to contain a fourth wave of coronavirus cases. Schallenberg said the lockdown will start Monday, Nov.22 , and initially last for 10 days. (Photo by Lisa Leutner/AP Photo) 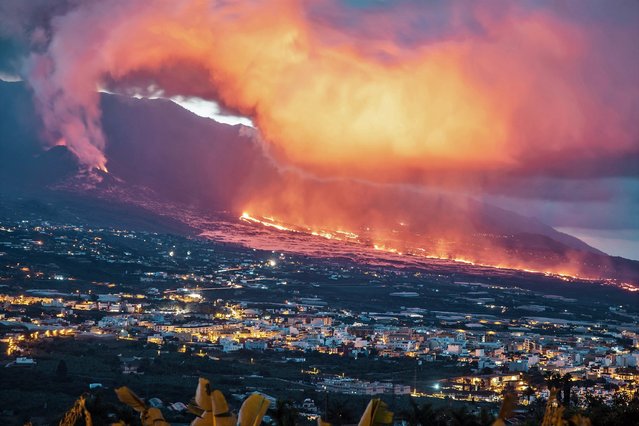 Lava flows from the Cumbre Vieja volcano, from Los Llanos de Aridane, on 19 November, 2021 in La Palma, Santa Cruz de Tenerife, Canary Islands, Spain. During the night of November 18th, the cone of the volcano has partially collapsed again and has produced an overflow of the lava lake, with the formation of waterfalls falling from the crater. The eruption, which began on September 19, has already covered more than 1,000 hectares, affecting or destroying so far more than 2,600 buildings/constructions. (Photo By k*ke Rincon/Europa Press via Getty Images) 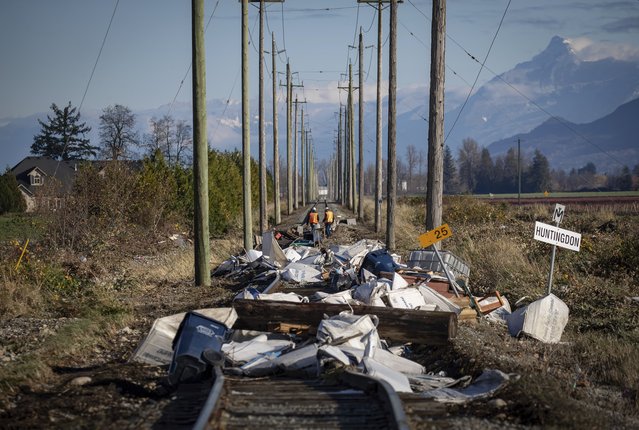 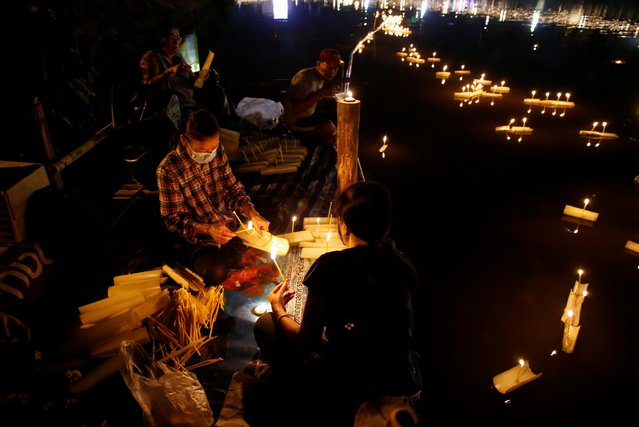 People gather to place krathongs (floating baskets) into a river during the Loy Krathong festival which is held as a symbolic apology to the goddess of the river in Chiang Mai, Thailand, November 19, 2021. Thais believe that the candle-lit boats launched during the charming and popular Loy Krathong festival can carry the year's misfortunes away with them, but workers must clean up the waterways afterward to keep them from getting clogged and polluted. (Photo by Soe Zeya Tun/Reuters) 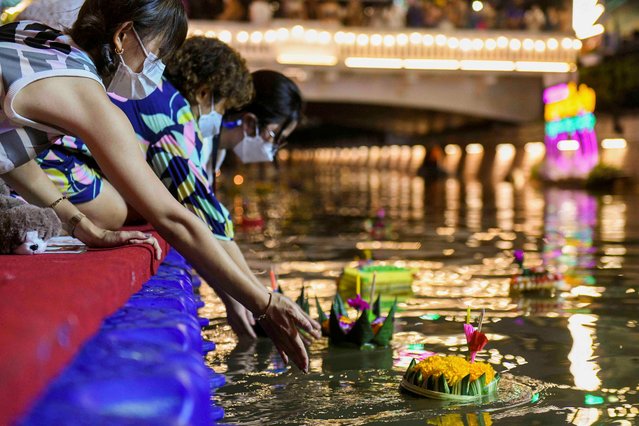 People wearing face masks to prevent the spread of the coronavirus disease (COVID-19), gather to place krathongs (floating baskets) into a river during the Loy Krathong festival, which is held as a symbolic apology to the goddess of the river in Bangkok, Thailand, November 19, 2021. (Photo by Chalinee Thirasupa/Reuters) 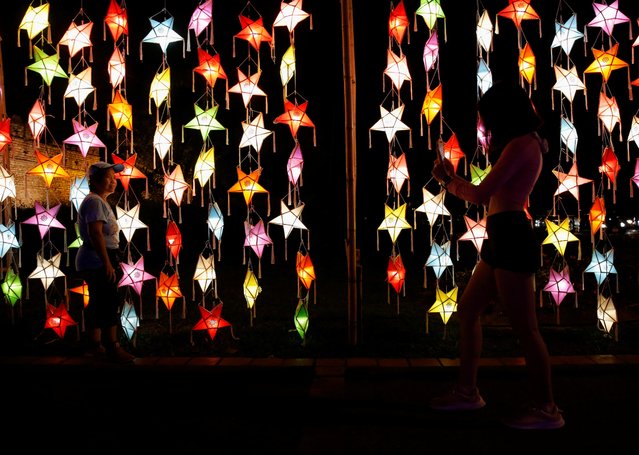 People take photos during the Loy Krathong festival which is held as a symbolic apology to the goddess of the river in Chiang Mai, Thailand, November 19, 2021. (Photo by Soe Zeya Tun/Reuters) 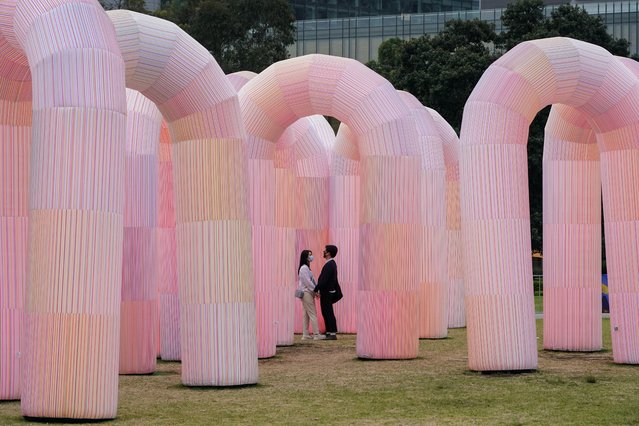 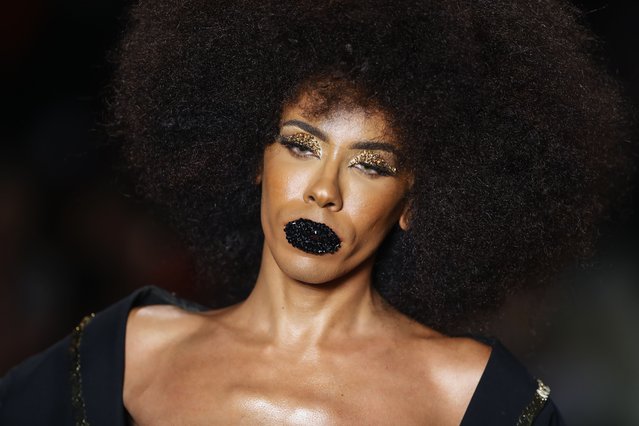 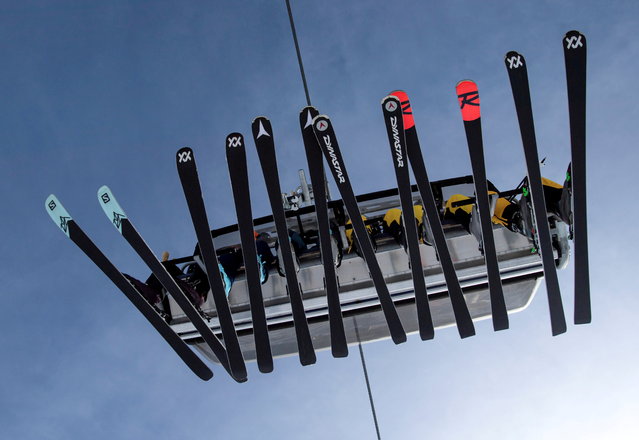 Skiers sit in a chairlift during the winter season opening day at Germany's highest mountain, the Zugspitze, in Grainau, near Garmisch-Partenkirchen, Germany, November 19, 2021. (Photo by Lukas Barth/Reuters) 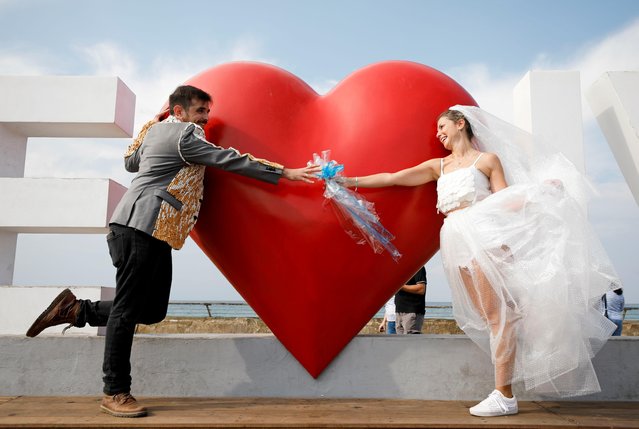 Models wearing garments made from recycled waste materials pose for pictures during Fashion Revolution, an event to raise awareness of environmental issues, in Tel Aviv, Israel on November 19, 2021. (Photo by Amir Cohen/Reuters) 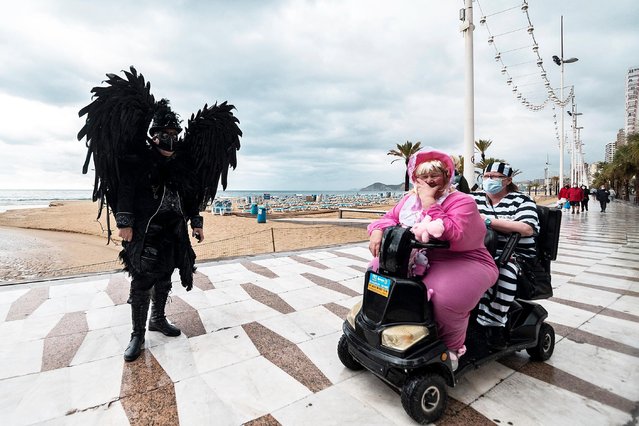 British tourists are disguised as they take part in “Fancy Dress Party” event in the seaside resort of Benidorm on the eastern coast of Spain, on November 18, 2021. (Photo by Jose Jordan/AFP Photo) 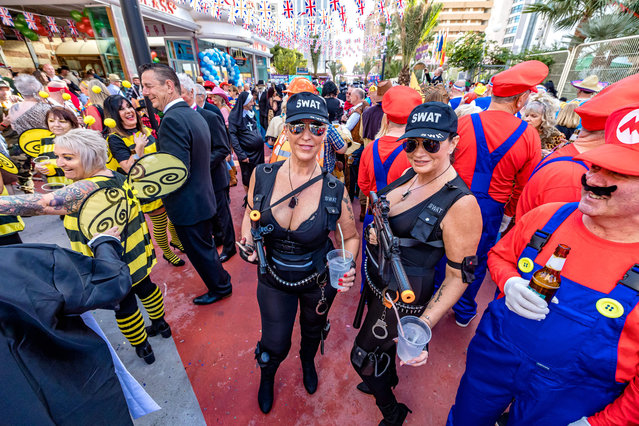 British tourists are disguised as they take part in “Fancy Dress Party” event in the seaside resort of Benidorm on the eastern coast of Spain, on November 18, 2021. (Photo by Solarpix) 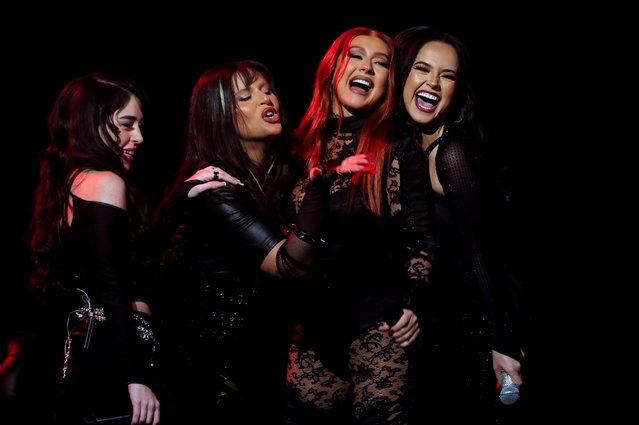 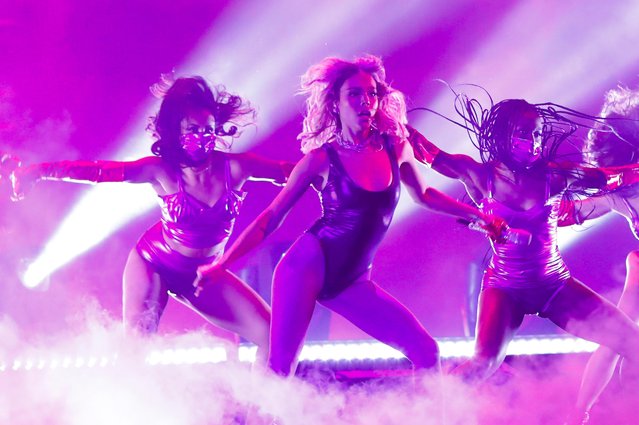 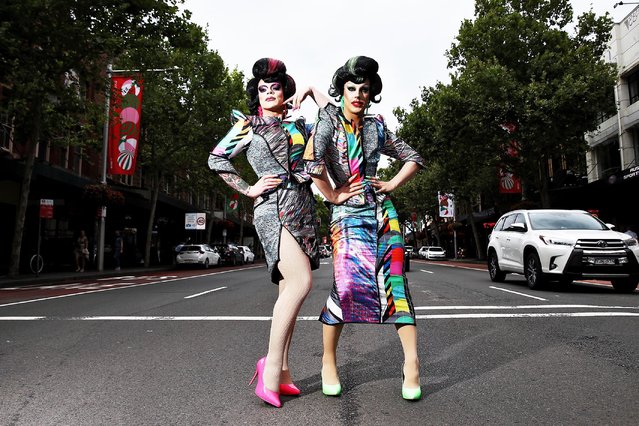