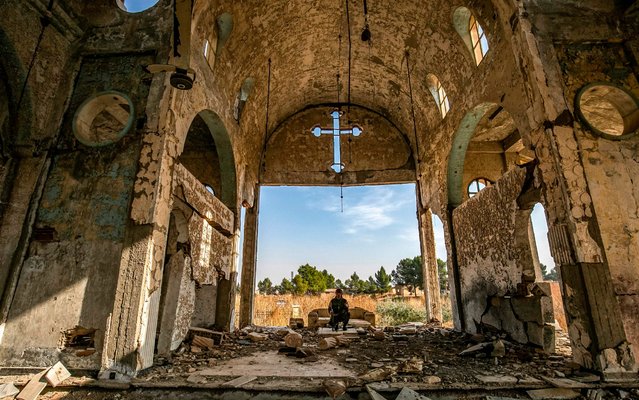 A member of the Khabour Guards (MNK) Assyrian Syrian militia, affiliated with the Syrian Democratic Forces (SDF), sits in the ruins of the Assyrian Church of the Virgin Mary, which was previously destroyed by Islamic State (IS) group fighters, in the village of Tal Nasri south of the town of Tal Tamr in Syria's northeastern Hasakah province on November 15, 2019. The few Assyrian Christians who escaped the Islamic State group invasion in 2015, and did not choose to emigrate, now anxiously watch the advance of Turkish forces toward their villages in southern Hassakeh province. (Photo by Delil Souleiman/AFP Photo) 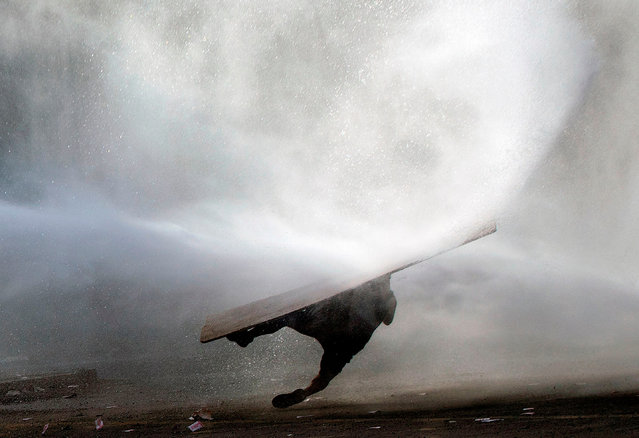 A demonstrator is hit by a riot police water cannon during a protest against the government in Santiago on November 18, 2019. President Sebastian Pinera condemned on Sunday for the first time what he called abuses committed by police in dealing with four weeks of violent unrest that have rocked Chile and which has left 22 people dead and more than 2,000 injured. Chileans have been protesting social and economic inequality, and against an entrenched political elite that comes from a small number of the wealthiest families in the country, among other issues. (Photo by Claudio Reyes/AFP Photo) 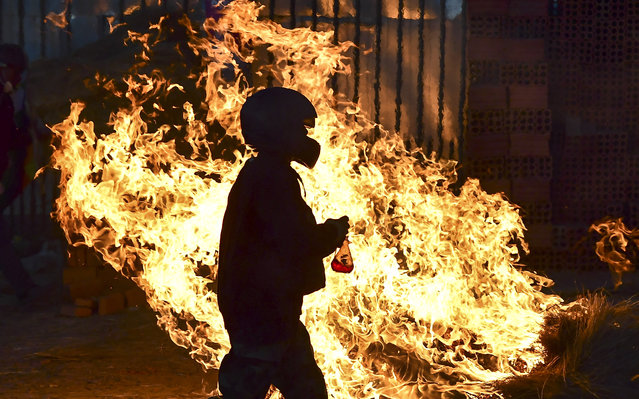 A man walks in front a fire blockade set by supporters of Bolivian ex-President Evo Morales in the outskirts of Sacaba, Chapare province, Cochabamba, on November 18, 2019. Bolivia's interim president said Sunday she will call new elections soon, as the country struggles with violent unrest a week after the resignation of Evo Morales. (Photo by Ronaldo Schemidt/AFP Photo) 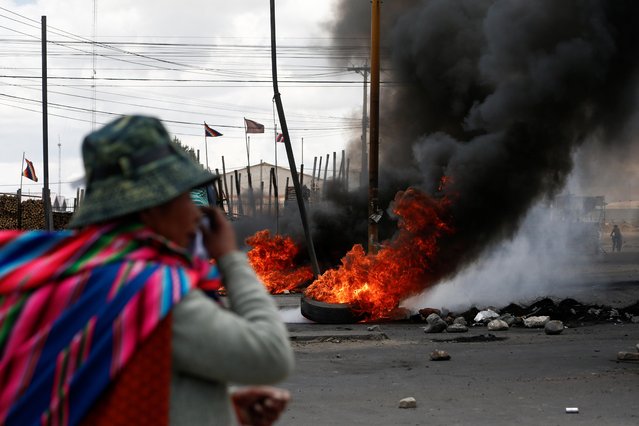 A person is seen near to a fire during a protest in Senkata, El Alto, Bolivia on November 19, 2019. Supporters of ousted Bolivian President Evo Morales ramp up protests and blockades of key transport routes, calling for caretaker President Jeanine Anez to step down and for Morales to return amid deadly clashes in the South American nation. (Photo by David Mercado/Reuters) 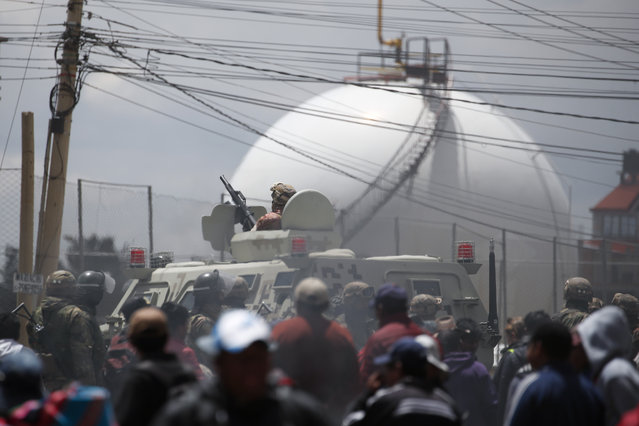 Soldiers guard the perimeters of the state-own Senkata filling plant, as supporters of former President Evo Morales gather round, in El Alto, on the outskirts of La Paz, Bolivia, Tuesday, November 19, 2019. Morales' backers have taken to the streets asking for his returns since he resigned on Nov. 10 under pressure from the military after weeks of protests against him over a disputed election he claim to have won. (Photo by Natacha Pisarenko/AP Photo) 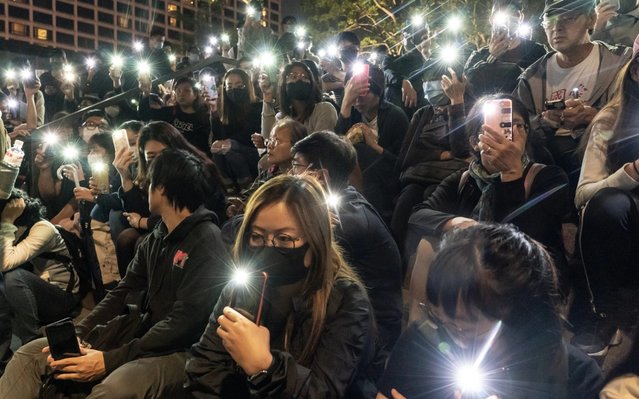 Pro-democracy supporters hold their phone's flashlight in a rally to show support for students at The Hong Kong Poytechnic University on November 19, 2019 in Hong Kong, China. Anti-government protesters armed with bricks, firebombs, and bows and arrows fought with the police at university campuses over the past week as demonstrations in Hong Kong stretched into its sixth month with demands for an independent inquiry into police brutality, the retraction of the word “riot” to describe the rallies, and genuine universal suffrage. (Photo by Anthony Kwan/Getty Images) 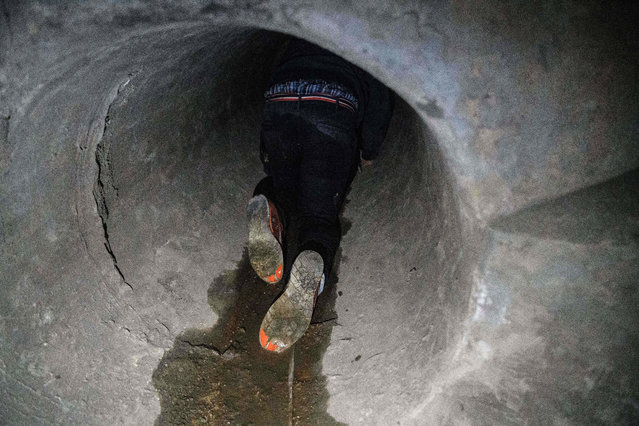 A protester crawls within a sewer tunnel to see how wide it is as he and others try to find an escape route from the Hong Kong Polytechnic University in the Hung Hom district of Hong Kong, early morning on November 19, 2019. Arms covered in cling film and torches in hand as they drop into the sewers, clusters of pro-democracy protesters still inside the Hong Kong campus are plotting increasingly ingenious – and desperate – ways to escape a police siege. (Photo by Anthony Wallace/AFP Photo) 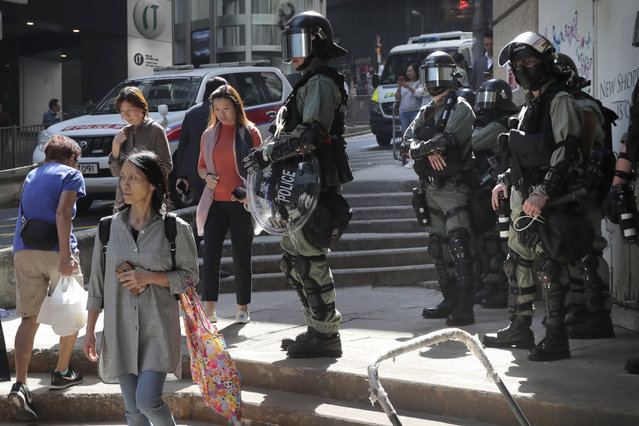 Riot police watch as people walk along a street in the financial district in Hong Kong, Wednesday, November 20, 2019. Hong Kong schools reopened Wednesday after a six-day shutdown but students and commuters faced transit disruptions as the last protesters remained holed up on a university campus. (Photo by Kin Cheung/AP Photo) 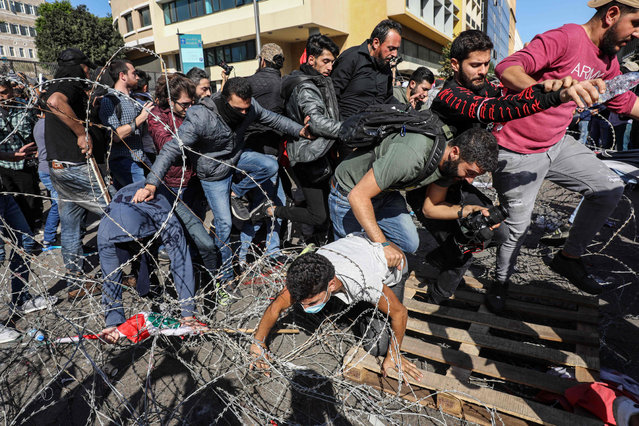 Lebanese protesters flee from security forces on their way back after having cut through the security barrier leading to the government palace at Riad al-Solh square in the capital Beirut's downtown district on November 19, 2019. An unprecedented protest movement against the ruling elite entered its second month with the country in the grip of political and economic turmoil. The leaderless pan-sectarian movement has swept the Mediterranean country since October 17, prompting the resignation of Prime Minister Saad Hariri's government. (Photo by Anwar Amro/AFP Photo) 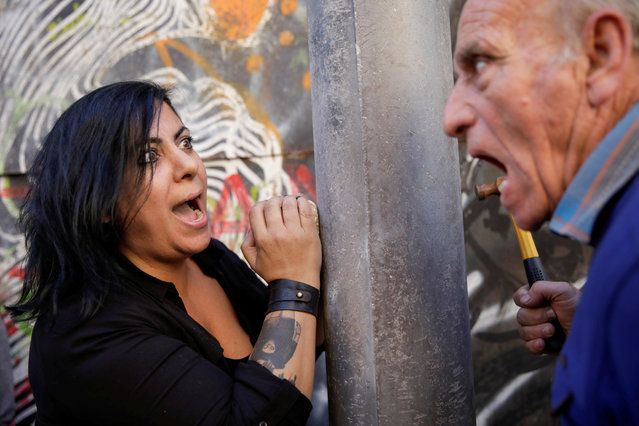 Protesters shout as they hit a pole during ongoing anti-government protests in Beirut, Lebanon on November 19, 2019. (Photo by Andres Martinez Casares/Reuters) 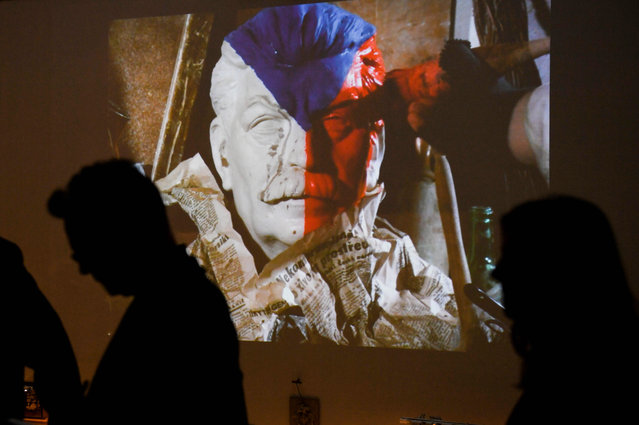 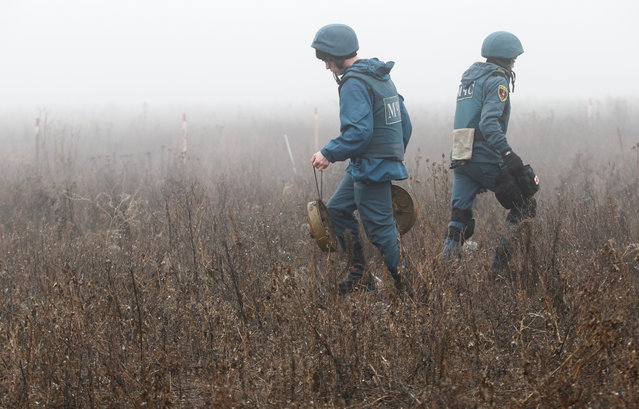 Members of the Emergencies Ministry of the separatist Donetsk People's Republic demine the area at the militants' former positions following troop withdrawals near the settlement of Petrovskoye (Petrivske) in Donetsk region, Ukraine on November 19, 2019. (Photo by Alexander Ermochenko/Reuters) 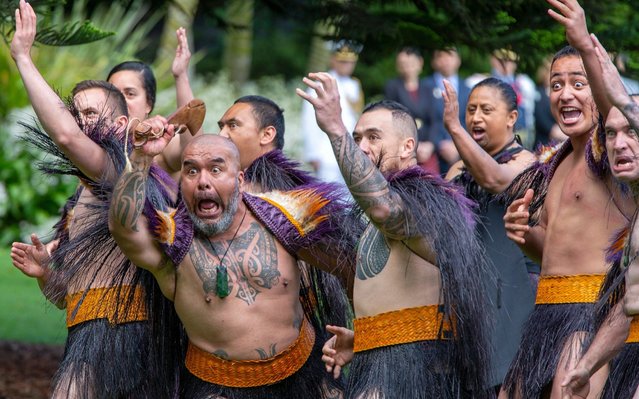 Prince Charles and Camilla, Duchess of Cornwall are greeted by ceremonial Maori warriors as they attend an official ceremony of welcome at Government House during their royal visit to New Zealand in Auckland, New Zealand, 19 November 2019. The visit will be part of a week-long tour of the country which also takes in Christchurch and Kaikoura. (Photo by David Rowland/EPA/EFE) 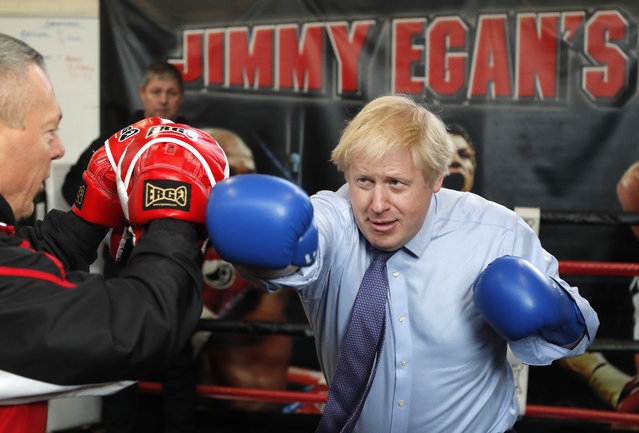 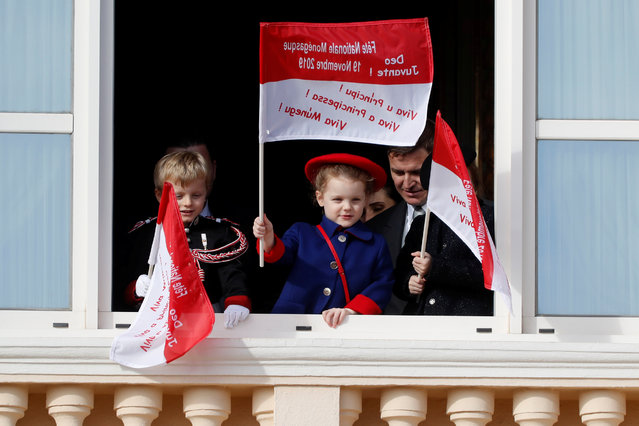 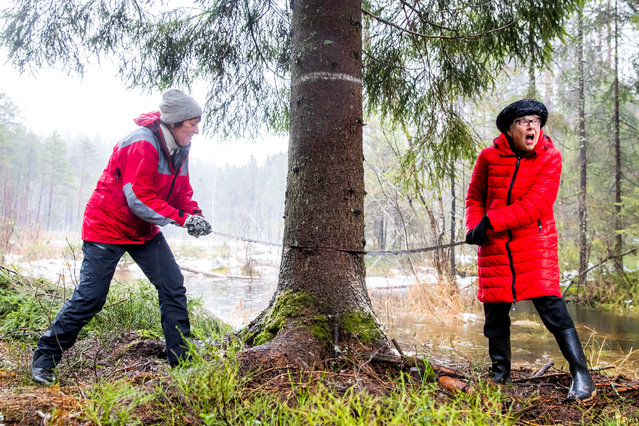 Mayor of Oslo Marianne Borgen and Lord Mayor of Westminster, Councillor Ruth Bush, saw the tree which will stand at Trafalgar Square in London for Christmas, in Olso, Norway on November 19, 2019. (Photo by Haakon Mosvold Larsen/NTB Scanpix via Reuters) 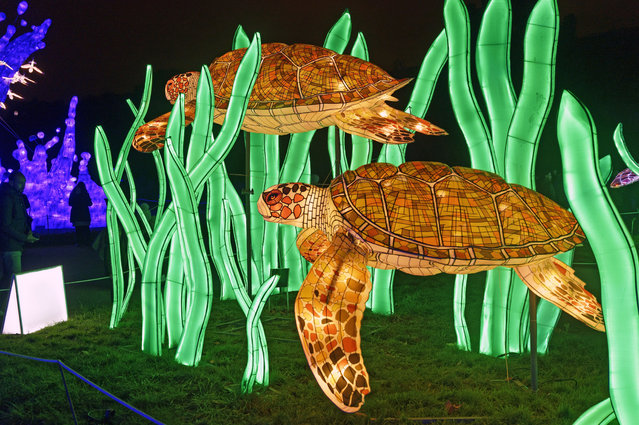 A luminous lantern representing a turtle is displayed during the exhibition “Ocean en voie d'illumination” at the National Museum of Natural History in Paris, France on November 18, 2019. For the second time in its history, the National Museum of Natural History offers a nocturnal walk in the light of monumental light structures representing animals up to 15 meters that will be held from November 18, 2019 to January 19, 2020. (Photo by Edmond Sadaka Edmond/SIPA Press/Rex Features/Shutterstock) 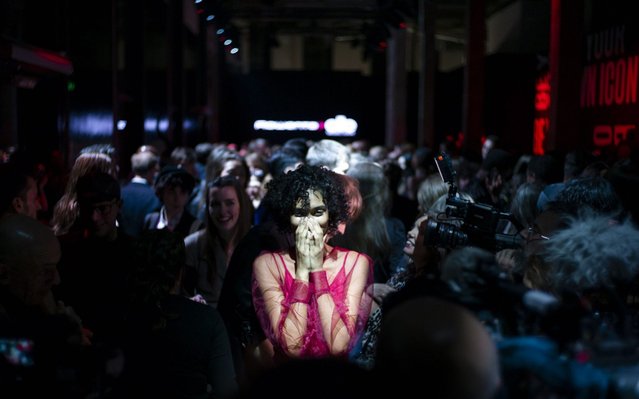