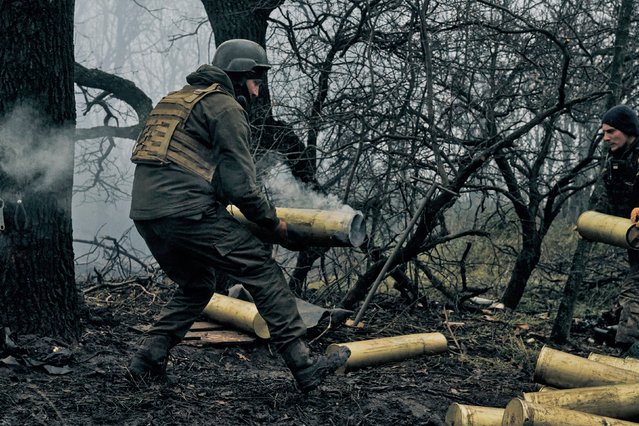 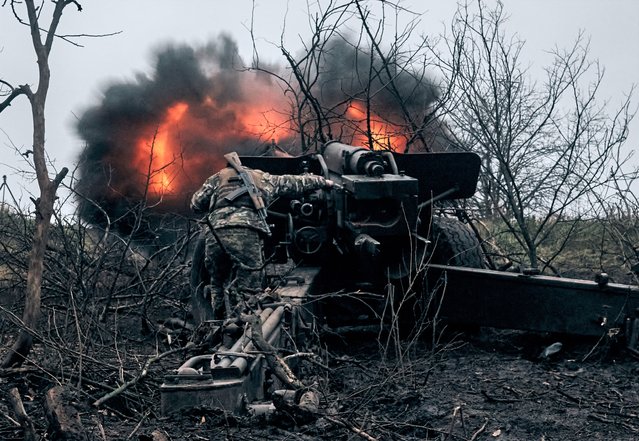 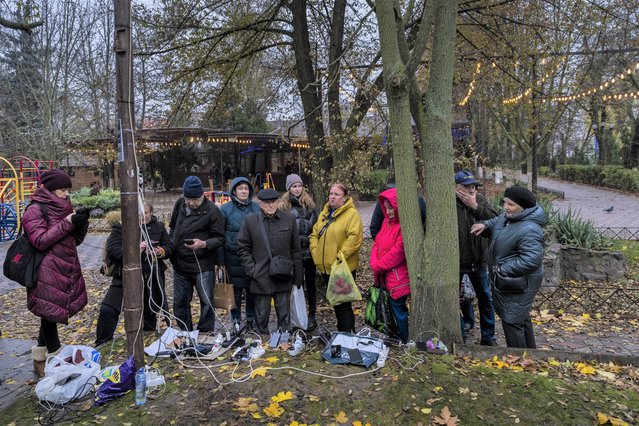 Residents plug in mobile phones and power banks at a charging point in downtown Kherson, southern Ukraine, Sunday, November 20, 2022. Russian forces fired tank shells, rockets and other artillery on the city of Kherson, which was recently liberated from Ukrainian forces. (Photo by Bernat Armangue/AP Photo) 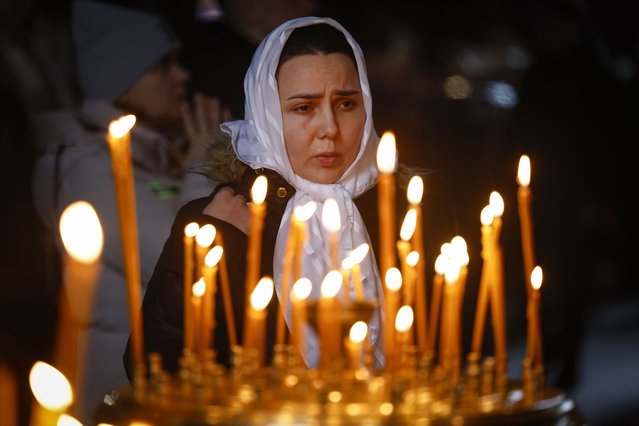 People visit St Volodymyr’s Cathedral during the Sunday service on November 20, 2022 in Kyiv, Ukraine. In recent days, Russia has retreated from the Ukrainian city of Kherson, allowing Ukraine to reclaim swaths of nearby territory occupied since shortly after the Russian invasion on February 24, 2022. (Photo by Jeff J. Mitchell/Getty Images) 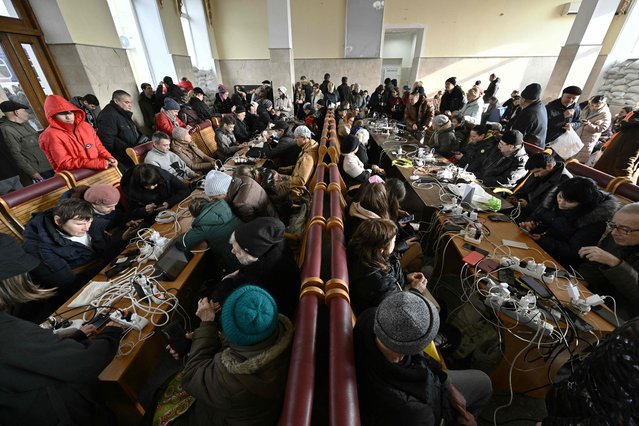 Kherson residents charge their phones at the city's train station, one of the few buildings in the city with electricity as the city's critical infrastructure including power and water supplies were destroyed, in Kherson on November 19, 2022, amid the Russian invasion of Ukraine. A railway link between the Ukrainian capital Kyiv and the recently reclaimed city of Kherson restarted on November 18, 2022, a week after a Russian retreat, a senior official said. (Photo by Genya Savilov/AFP Photo) 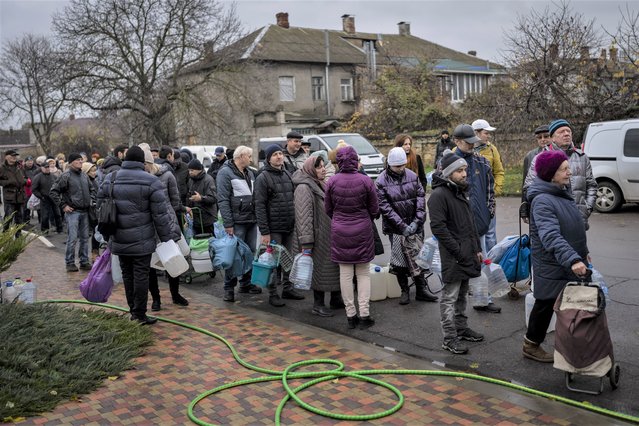 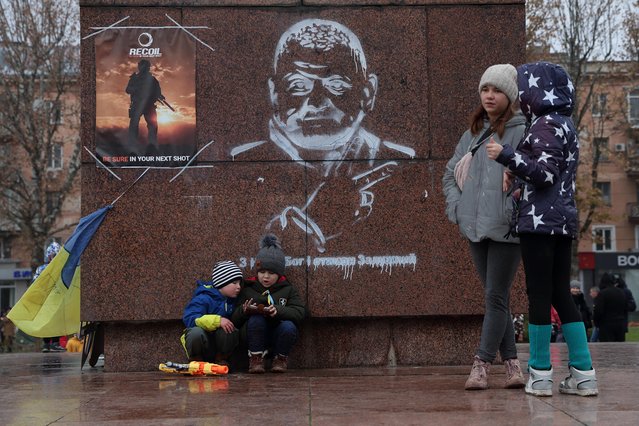 Boys sit under a monument with a graffiti of Commander in Chief of the Ukrainian armed Forces Valerii Zaluzhnyi on it, after Russia's military retreat, in central Kherson, Ukraine on November 20, 2022. (Photo by Murad Sezer/Reuters) 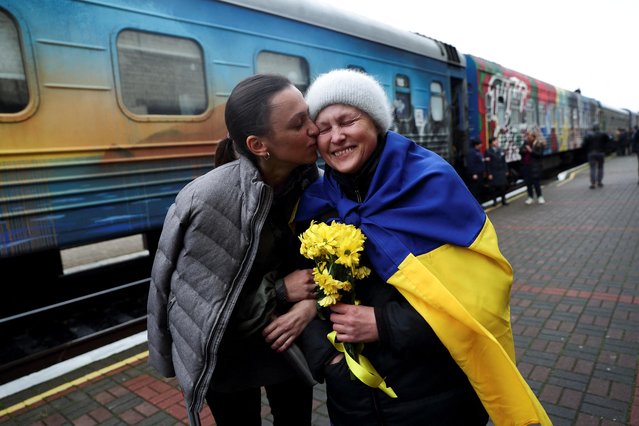 Anastasia kisses her mother Oksana as she arrives from Kyiv to Kherson with the first train after Russia's military retreat, at the main train station in Kherson, Ukraine on November 19, 2022. (Photo by Murad Sezer/Reuters) 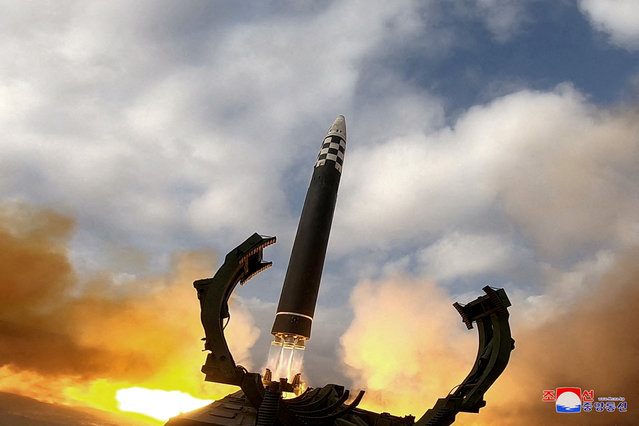 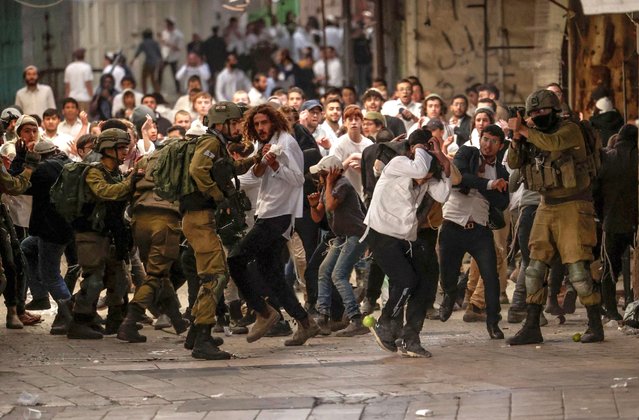 Israeli security forces deploy amid altercations between Jewish settlers on their way to visit the tomb of Othniel ben Kenaz in the area H1 (controlled by Palestinian authorities) and Palestinian residents, in the occupied West Bank city of Hebron, on November 19, 2022 (Photo by Hazem Bader/AFP Photo) 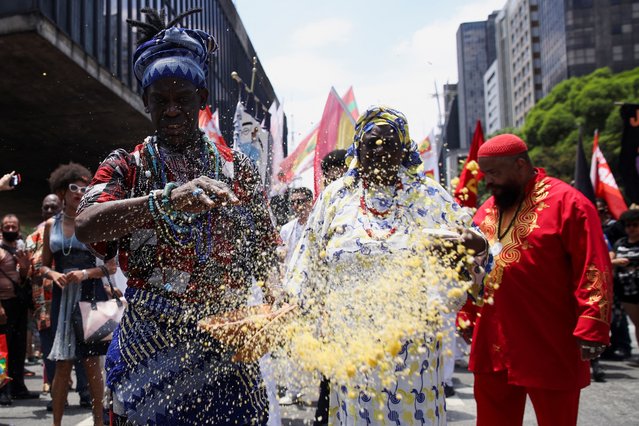 People from Afro-Brazilian religions take part in a protest during the National Black Consciousness Day in Sao Paulo, Brazil on November 20, 2022. (Photo by Carla Carniel/Reuters) 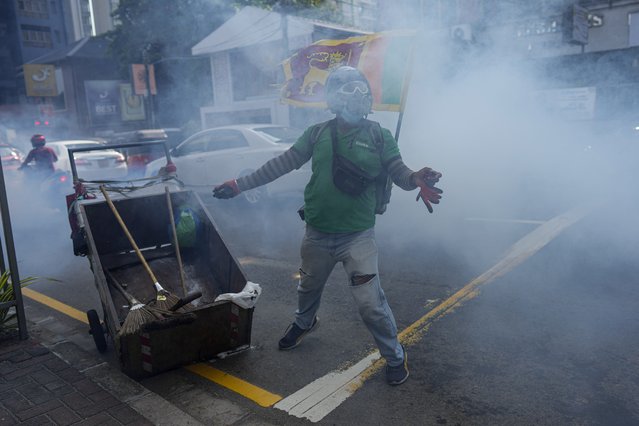 A protester throws back a tear gas canister towards police officers after police attempted to disperse an anti government protest march in Colombo, Sri Lanka, Friday, November 18, 2022. Dozens of students marched in protest against the detention of two student leaders who had participated in a protest over economic hardships and demanding political reforms. Friday marked 90 days of their detention under the country's harsh anti-terror law. (Photo by Eranga Jayawardena/AP Photo) 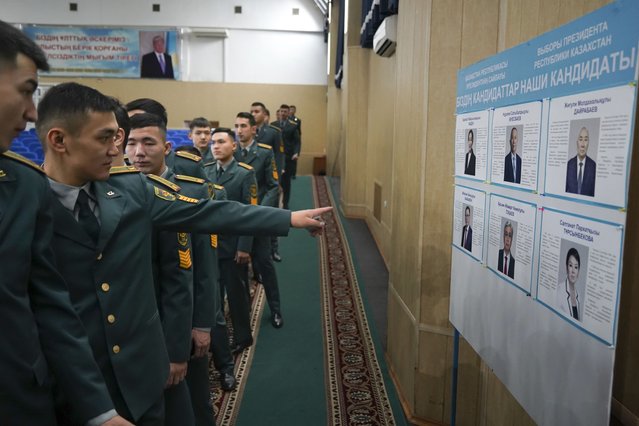 National servicemen lineup to cast their votes next to a poster showing presidential candidates at a polling station in Almaty, Kazakhstan, Sunday, November 20, 2022. Kazakhstan's president appears certain to win a new term against little-known challengers in a snap election on Sunday. Five candidates are on the ballot against President Kassym-Jomart Tokayev, who faced a bloody outburst of unrest early this year and then moved to marginalize some of the Central Asian country's longtime powerful figures. (Photo by Vladimir Tretyakov/NUR.KZ via AP Photo) 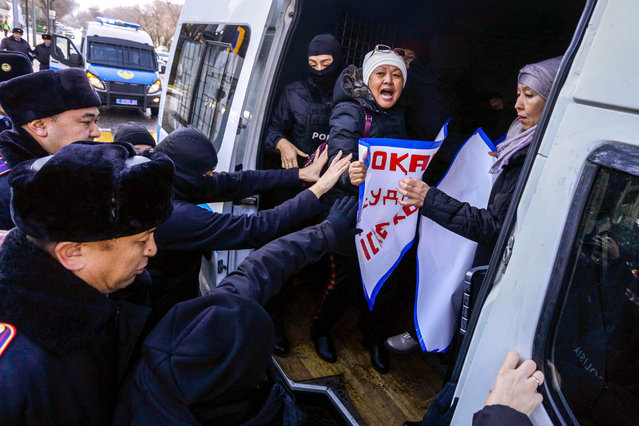 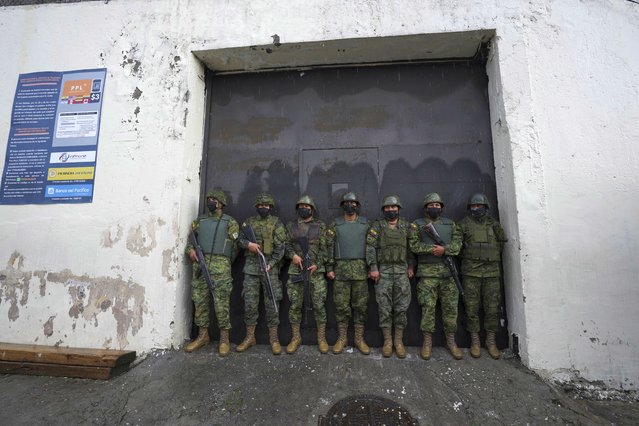 Soldiers guard an entrance to the Inca jail where eight inmates were killed during a prison riot, according to Police Commander Victor Herrera, in Quito, Ecuador, Friday, November 18, 2022. (Photo by Dolores Ochoa/AP Photo) 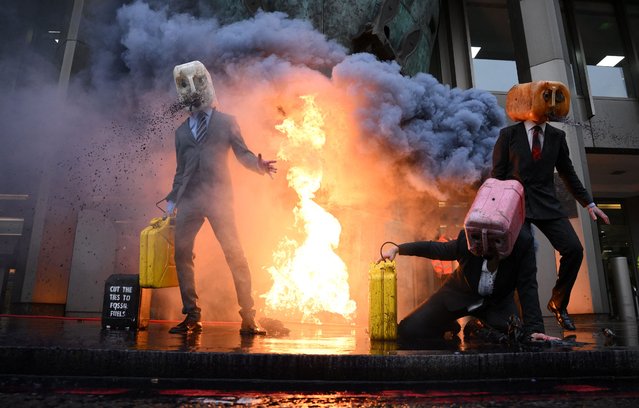 Oil Heads, climate activists from the Ocean Rebellion group, vomit mock oil as they demonstrate against the use of fossil fuels outside the offices of the International Maritime Organisation in London on November 21, 2022. (Photo by Daniel Leal/AFP Photo) 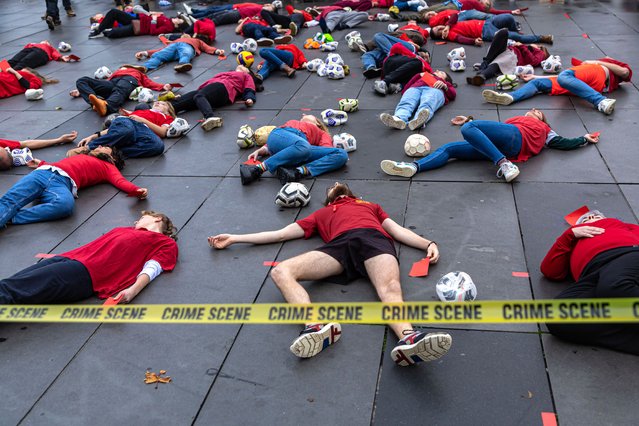 Members of the French environmental activists named “Red Card to Qatar” perform a die-in at Republic square in Paris, France, 20 November 2022. The 'Red Card to Qatar' campaign calls for a boycott of the 2022 World Cup on environmental and human rights grounds. (Photo by Christophe Petit Tesson/EPA/EFE/Rex Features/Shutterstock) 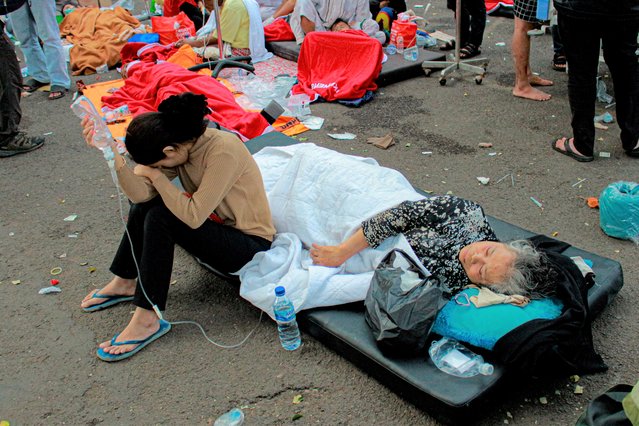 Earthquake survivors are treated outside of a hospital in Cianjur, West Java, Indonesia, Monday, November 21, 2022. An earthquake shook Indonesia's main island of Java on Monday damaging dozens of buildings and sending residents into the capital's streets for safety. (Photo by Kholid/AP Photo) 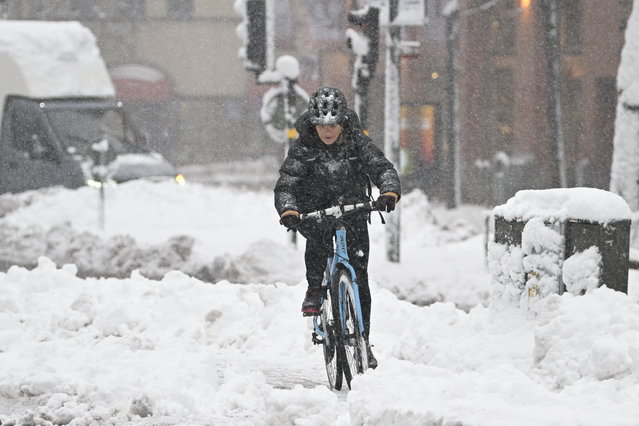 A woman cycles through the snow on November 21, 2022 in Stockholm, after heavy snowfall hit southern Sweden. (Photo by Anders Wiklund/TT News Agency via AFP Photo) 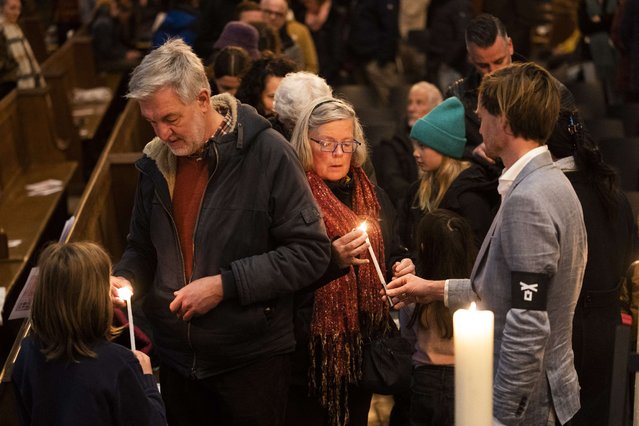 People light candles during a memorial service for the workers who died in the construction of the World Cup stadiums in Qatar just before its opening ceremony in the Domkerk in Utrecht, on November 20, 2022. (Photo by Jeroen Jumelet/ANP via AFP Photo) 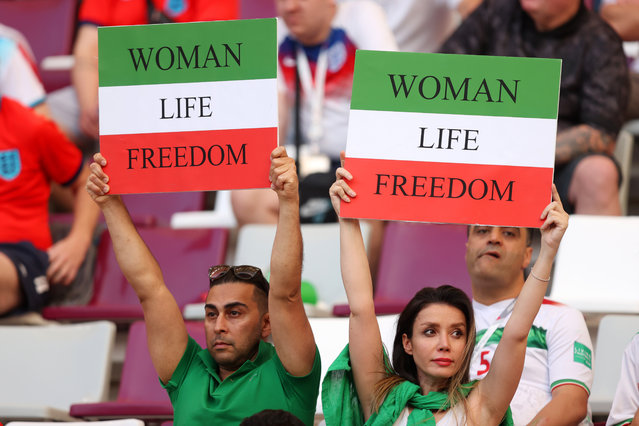 Iranian fans hold up signs prior to the FIFA World Cup Qatar 2022 Group B match between England and IR Iran at Khalifa International Stadium on November 21, 2022 in Doha, Qatar. (Photo by Julian Finney/Getty Images) 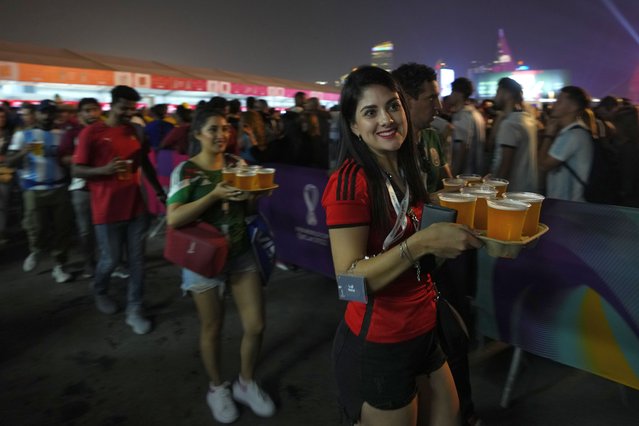 Fans carry their beers at a fan zone ahead of the FIFA World Cup, in Doha, Qatar Saturday, November 19, 2022. (Photo by Petr David Josek/AP Photo) 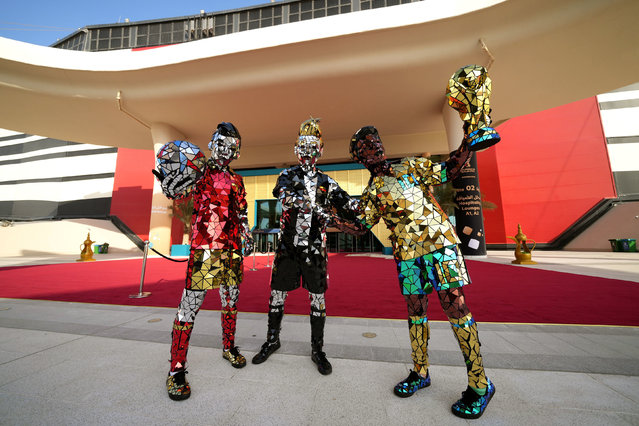 Performers with a replica World Cup outside the stadium ahead of the FIFA World Cup Group A match at the Al Bayt Stadium, Al Khor on Sunday, November 20, 2022. (Photo by Mike Egerton/PA Images via Getty Images) 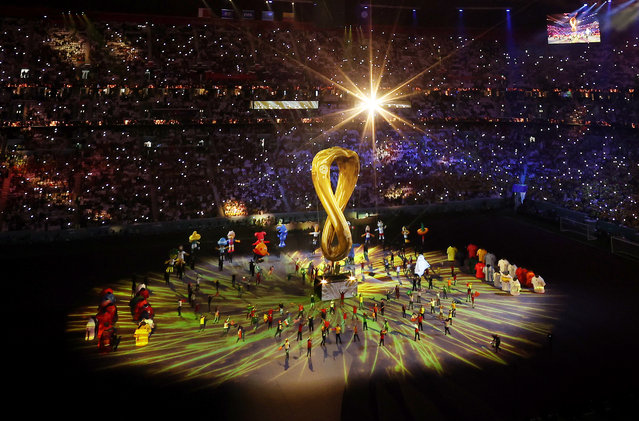 Dancers perform during the opening ceremony prior to the FIFA World Cup Qatar 2022 Group A match between Qatar and Ecuador at Al Bayt Stadium on November 20, 2022 in Al Khor, Qatar. (Photo by Mohamed Farag/Getty Images) 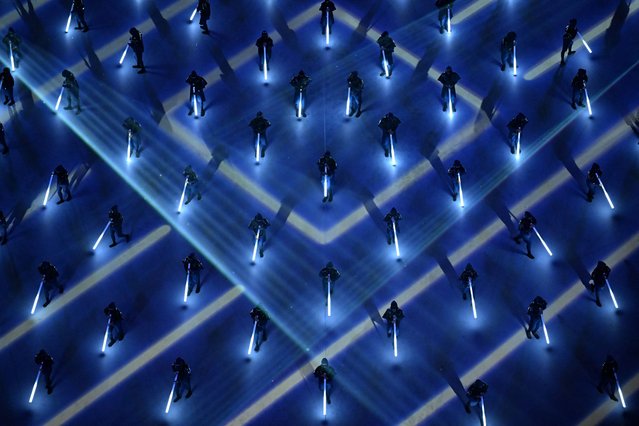 Dancers perform during the opening ceremony ahead of the Qatar 2022 World Cup Group A football match between Qatar and Ecuador at the Al-Bayt Stadium in Al Khor, north of Doha on November 20, 2022. (Photo by Kirill Kudryavtsev/AFP Photo) 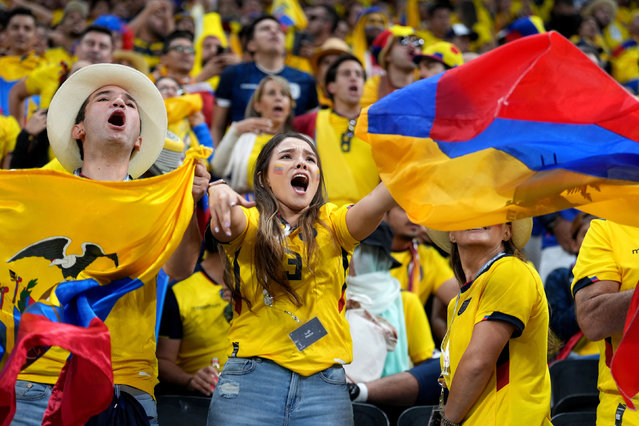