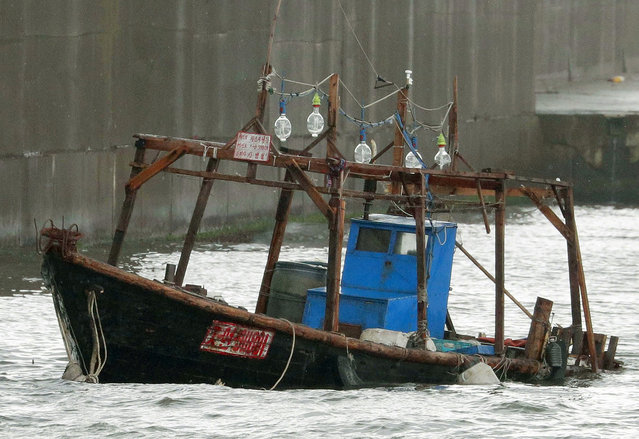 A wooden boat is seen at a nearby marina, in Yurihonjo, Akita prefecture, northern Japan, Friday, November 24, 2017. Japanese police are investigating eight men found on Japan's northern coast who say they are from North Korea and washed ashore after their boat broke down. Akita prefectural police said Friday they found the men late Thursday after receiving a call that a group of suspicious men were standing around at the seaside in Yurihonjo town. Police also found the wooden boat at the marina. (Photo by Hironori Asakawa/Kyodo News via AP Photo) 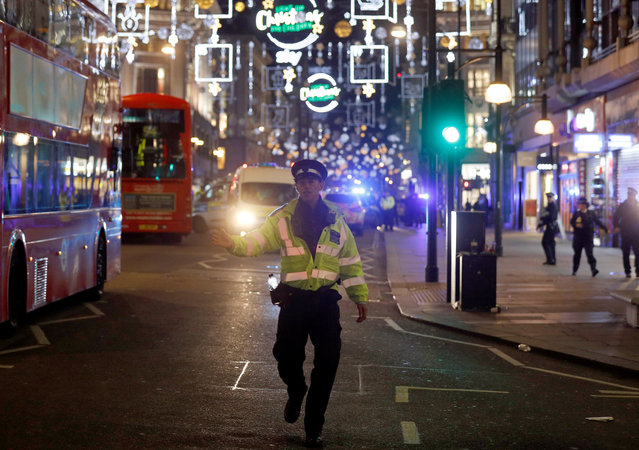 A police officer walks along Oxford Street, in central London, Britain, November 24, 2017. Police are responding to reports of an incident at London's Oxford Circus Tube station and have urged the public to avoid the area. (Photo by Peter Nicholls/Reuters) 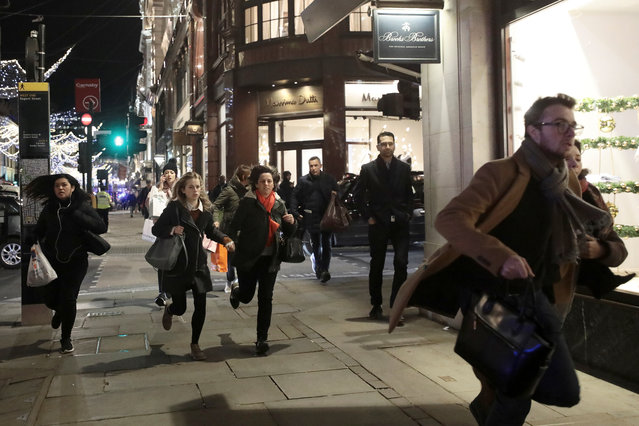 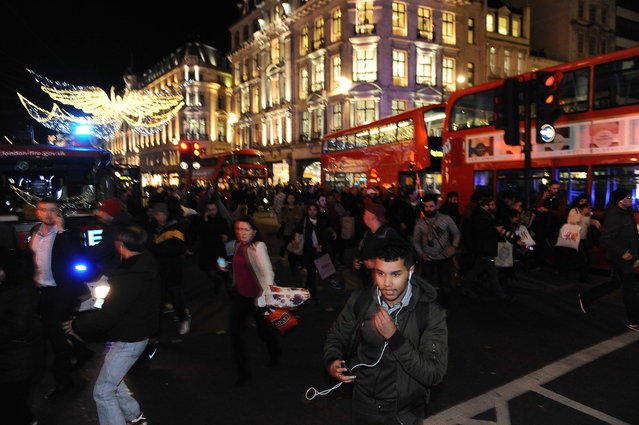 Police and armed police at Oxford Circus conduct an evacuation after a police incident on November 24, 2017. (Photo by Marcin Wziontek/Rex Features/Shutterstock) 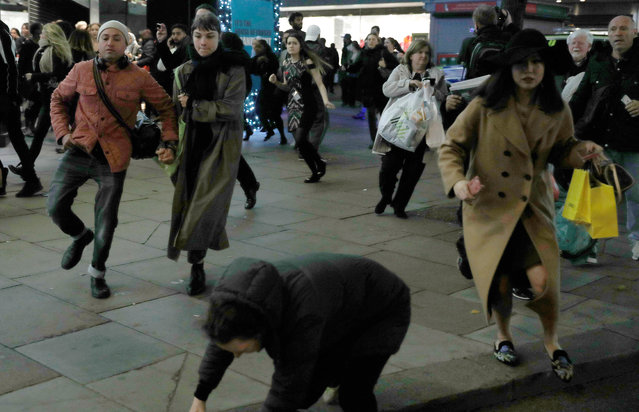 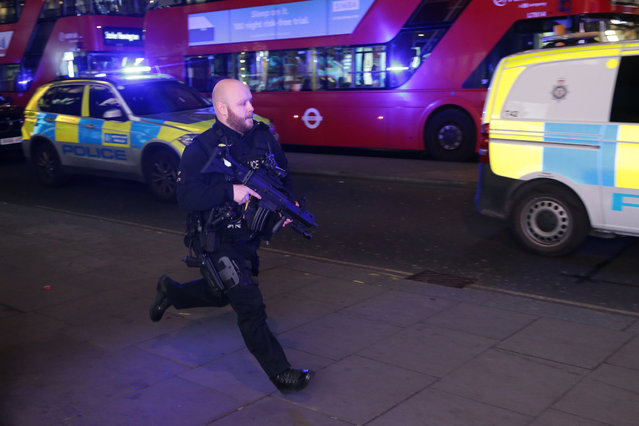 An armed policeman runs down Oxford Street in central London on November 24, 2017, as police responded to an incident. (Photo by Daniel Leal-Olivas/AFP Photo) 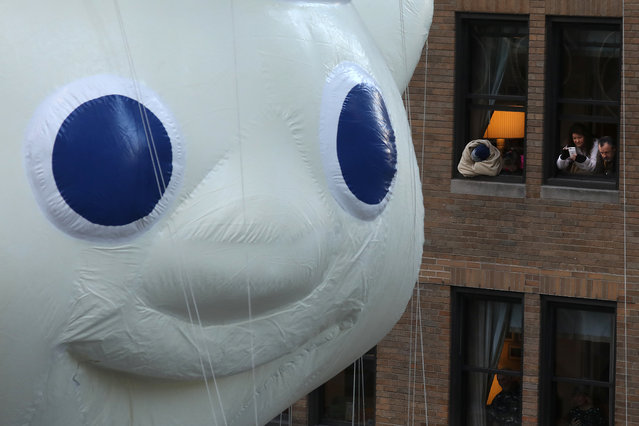 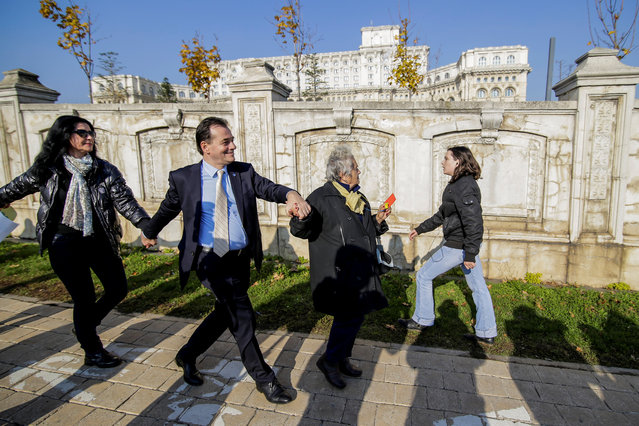 Leader of the Liberal Party, Ludovic Orban, takes part in a protest outside the Romanian Parliament during a no-confidence vote against Romania's Social Democrat-led government, in Bucharest, Romania on November 23, 2017. (Photo by George Calin/Reuters/Inquam Photos) 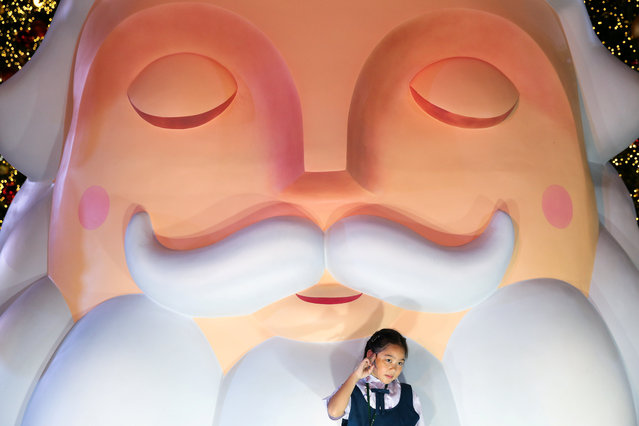 A girl poses near Christmas decorations to celebrate the upcoming Christmas season, in front of a department store in the shopping district of central Bangkok, Thailand on November 23, 2017. (Photo by Athit Perawongmetha/Reuters) 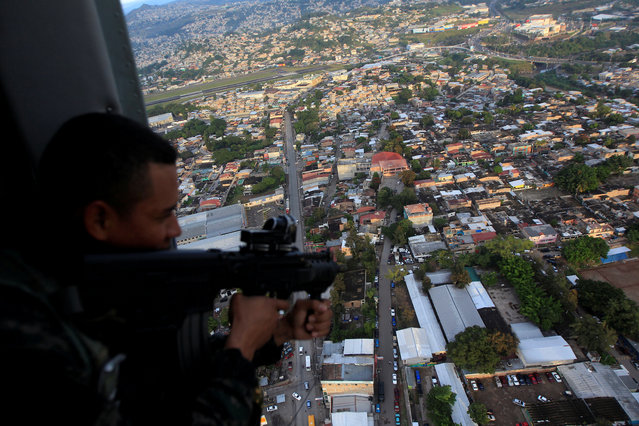 A soldier in a military helicopter aims his weapon during a patrol of the operation “Peace and Democracy II” as part of the security measures for the November 26 presidential election, in Tegucigalpa, Honduras on November 23, 2017. (Photo by Jorge Cabrera/Reuters) 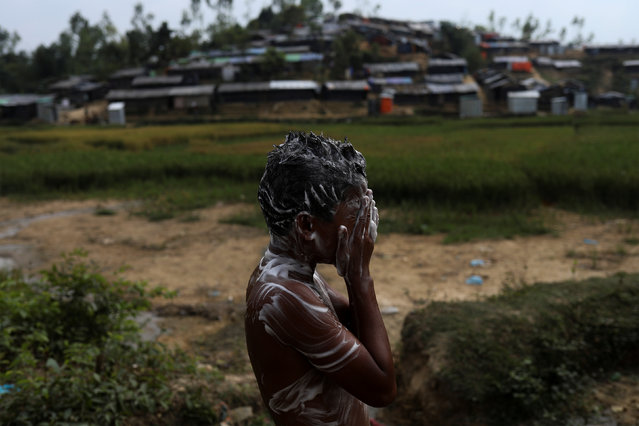 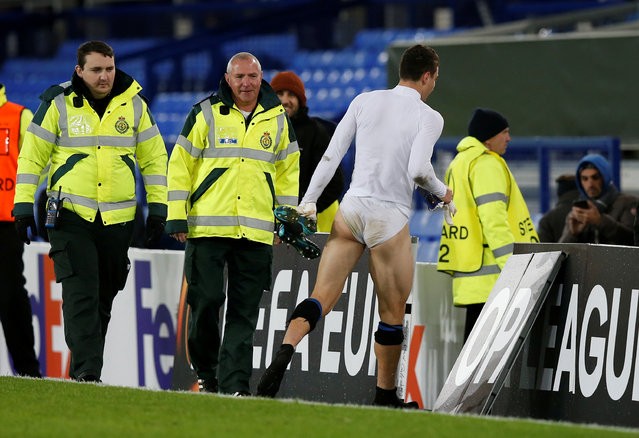 Atalanta's Mattia Caldara after throwing his kit into the crowd after the Europa League match against Everton in Goodison Park, Liverpool, Britain on November 23, 2017. (Photo by Andrew Yates/Reuters) 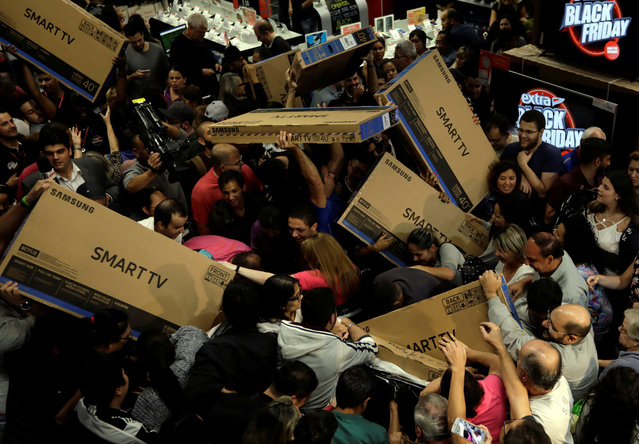 Shoppers reach out for television sets as they compete to purchase retail items on Black Friday at a store in Sao Paulo, Brazil on November 24, 2017. (Photo by Paulo Whitaker/Reuters) 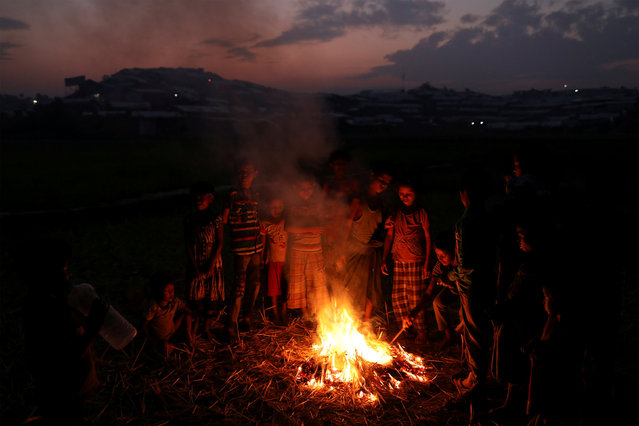 Rohingya refugee children stand by a bonfire in a field at Jamtoli refugee settlement near Cox's Bazar, Bangladesh, November 24, 2017. (Photo by Susana Vera/Reuters) 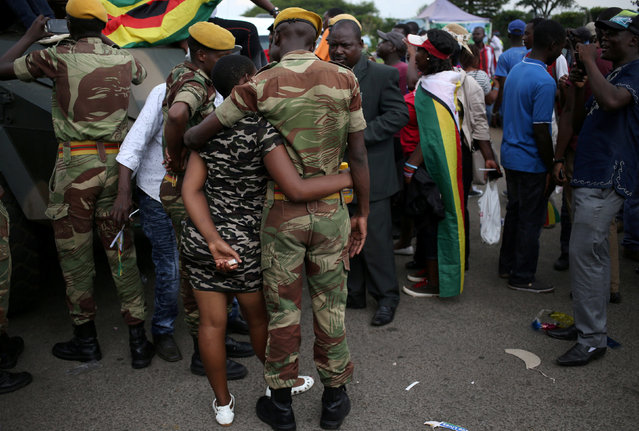 A member of Zimbabwe military chats with a local after the swearing in of Emmerson Mnangagwa as Zimbabwe's new president in Harare, Zimbabwe, November 24, 2017. (Photo by Siphiwe Sibeko/Reuters) 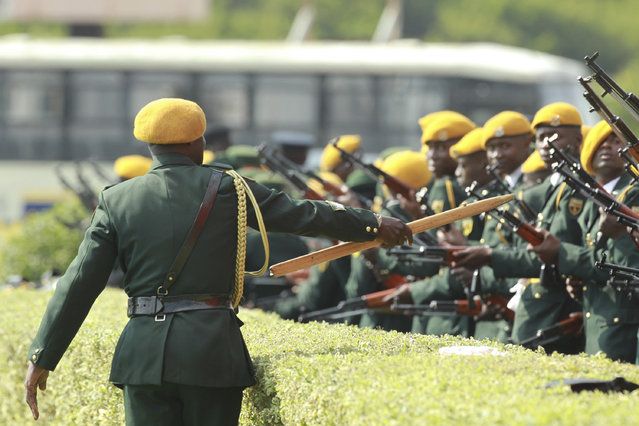 Soldiers make their final drills at the presidential inauguration ceremony of Emmerson Mnangagwa in Harare, Zimbabwe, Friday, November 24, 2017. Mnangagwa will be sworn in as Zimbabwe's president after Robert Mugabe resigned on Tuesday, ending his 37 year rule. (Photo by Tsvangirayi Mukwazhi/AP Photo) 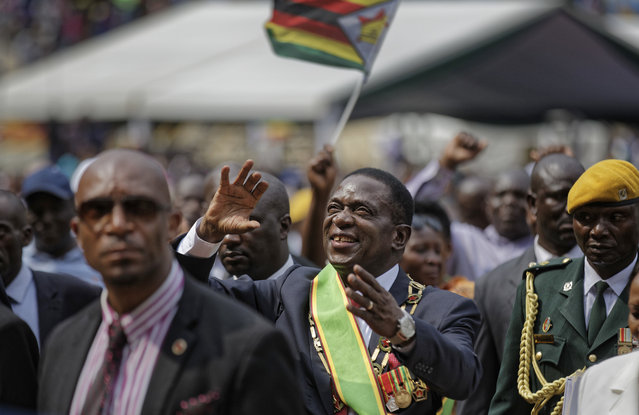 Zimbabwe's President Emmerson Mnangagwa, center, gestures to the cheering crowd as he leaves after the presidential inauguration ceremony in the capital Harare, Zimbabwe Friday, November 24, 2017. Mnangagwa was sworn in as Zimbabwe's president after Robert Mugabe resigned on Tuesday, ending his 37-year rule. (Photo by Ben Curtis/AP Photo) 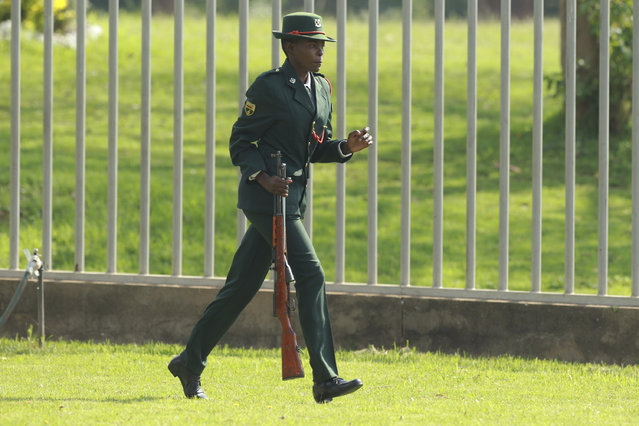 A soldier runs to take her position at the presidential inauguration ceremony of Emmerson Mnangagwa in Harare, Zimbabwe, Friday, November 24, 2017. Mnangagwa will be sworn in Friday as Zimbabwe's new leader, but many are questioning whether he'll be able to bring the change the country craves. (Photo by Tsvangirayi Mukwazhi/AP Photo) 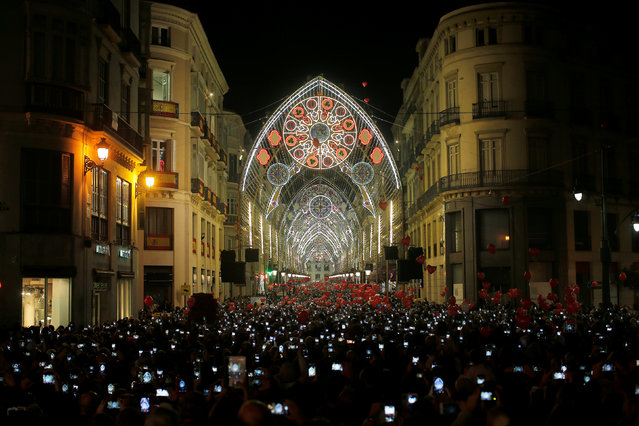 People use mobile phones to take pictures as Christmas lights are turned on to mark the start of the Christmas season at Marques de Larios street in downtown Malaga, southern Spain, November 24, 2017. (Photo by Jon Nazca/Reuters) 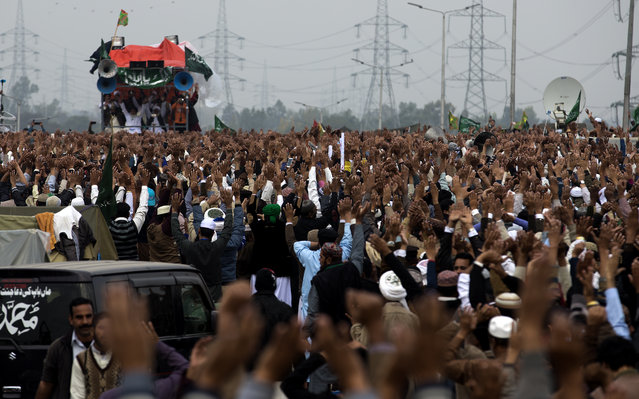 Protesters express their supports to their leadership during a sit-in protest at an entrance of Islamabad, Pakistan, Friday, November 24, 2017. Religious groups continues their rally at the edge of Islamabad, disrupting daily life in capital, demand the removal of the country's law minister over a recently omitted reference to the Prophet Muhammad in a constitutional bill. (Photo by B.K. Bangash/AP Photo) 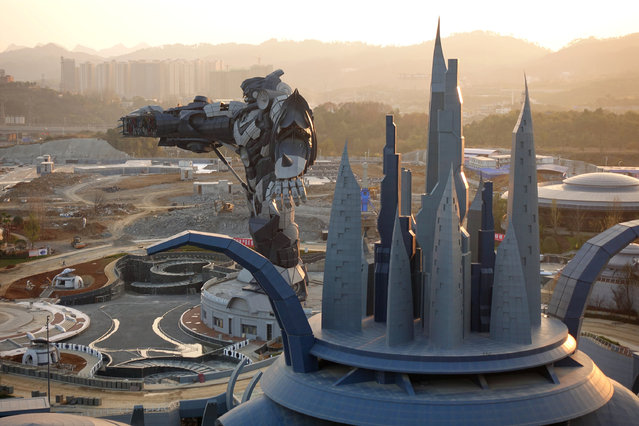 A view of the Oriental Science Fiction Valley theme park at sunset, in Guiyang, Guizhou province, China on November 24, 2017. Giant robots and futuristic cyberpunk castles rise out of lush mountain slopes on the outskirts of Guiyang, the capital of one of China's poorest provinces. (Photo by Joseph Campbell/Reuters) 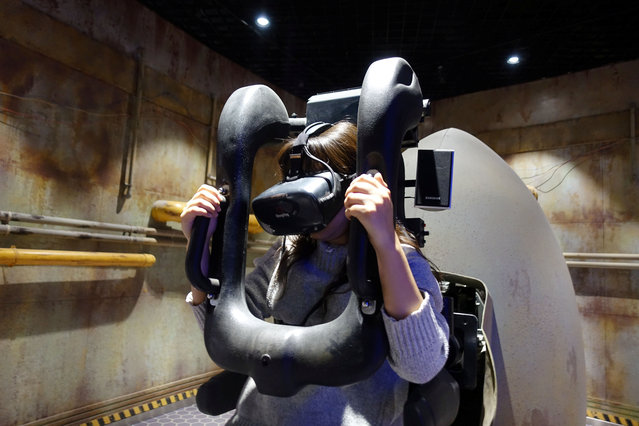 A staff member demonstrates a test-run of the virtual reality (VR) attraction “Explore the Stars” on November 24, 2017. The $1.5-billion Oriental Science Fiction Valley park, is part of China's thrust to develop new drivers of growth centered on trends such as gaming, sports and cutting-edge technology, to cut reliance on traditional industries. (Photo by Joseph Campbell/Reuters) 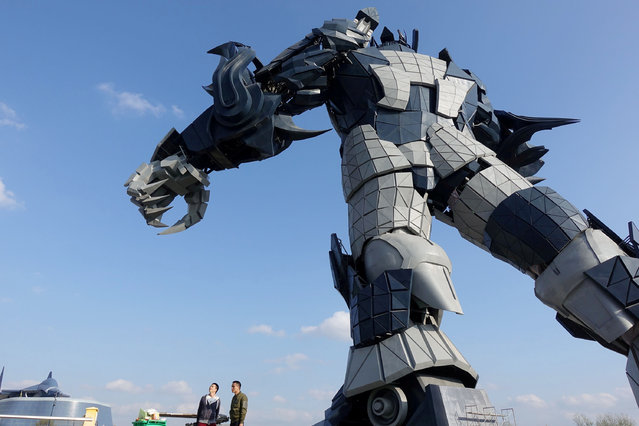