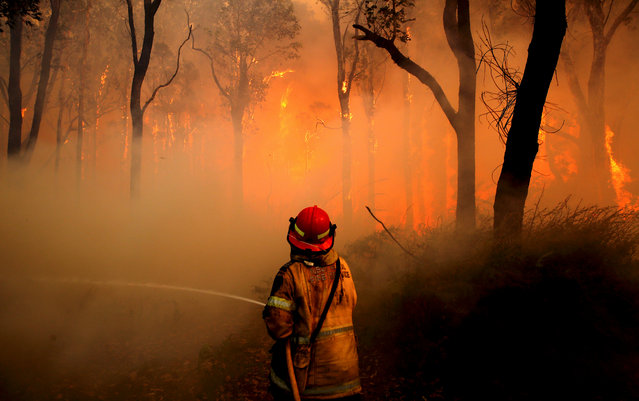 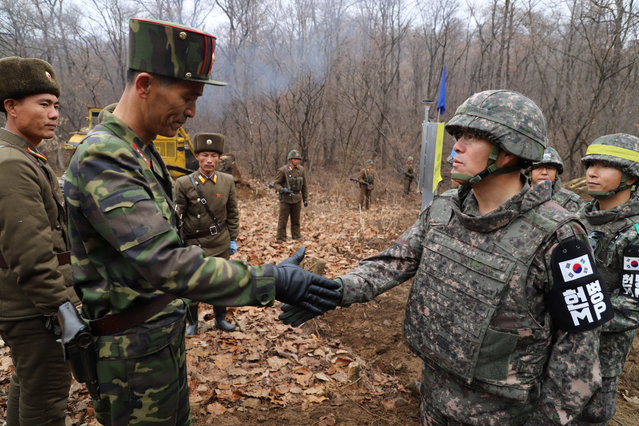 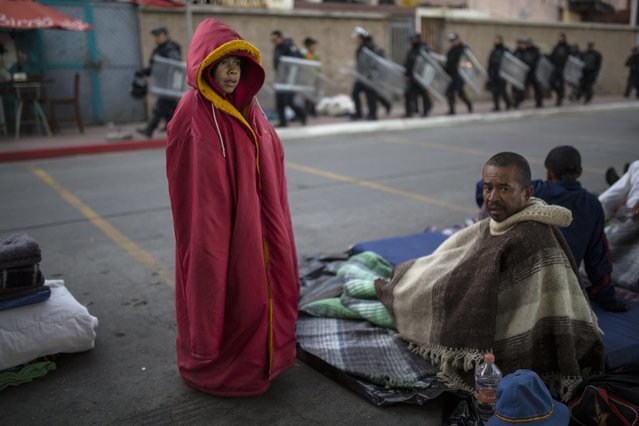 Jonathan Torres, 11, stands next to his father after waking up early in the morning as Mexican riot police make their way to the Chaparral border crossing, in Tijuana, Mexico, Friday, November 23, 2018. The mayor of Tijuana has declared a humanitarian crisis in his border city and says that he has asked the United Nations for aid to deal with the approximately 5,000 Central American migrants who have arrived in the city.(Photo by Rodrigo Abd/AP Photo) 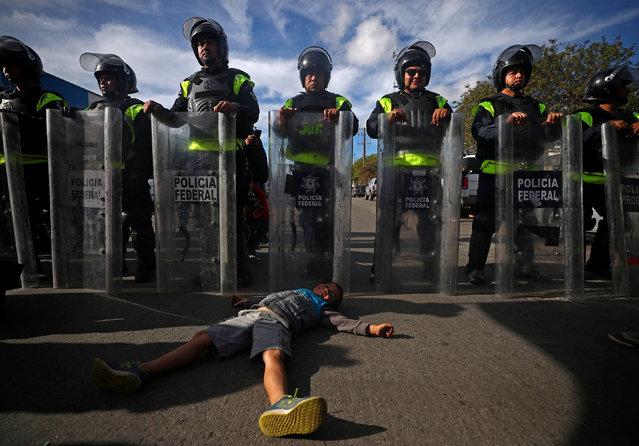 Fernando Velosque, a six-year-old migrant boy from Honduras, part of a caravan of thousands from Central America trying to reach the United States, lies on the floor in front of Mexican riot police as migrants gather outside the El Chaparral port of entry of border crossing between Mexico and the United States, as seen from Tijuana, Mexico, November 22, 2018. (Photo by Hannah McKay/Reuters) 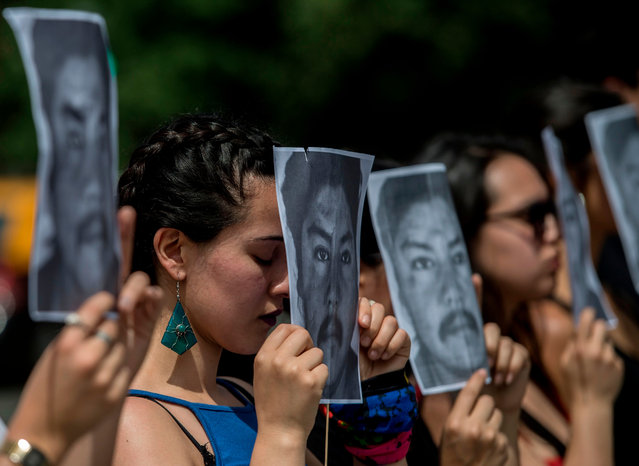 Chilean artists pay tribute to 24- year- old Mapuche indigenous Camilo Catrillanca who was shot dead in a police operation in Araucania region last November 14, during a performance in front of La Moneda presidential palace in Santiago, on November 22, 2018. Last week, the president of Chile pledged an investigation into the police killing that sparked protests and firebomb attacks and revived allegations of state persecution of indigenous people. According to a Mapuche community lawyer, Camilo Catrillanca was driving a tractor to work accompanied by a young boy when he was shot dead during a police operation in the Araucania region (south), epicentre of the Mapuche conflict. (Photo by Martin Bernetti/AFP Photo) 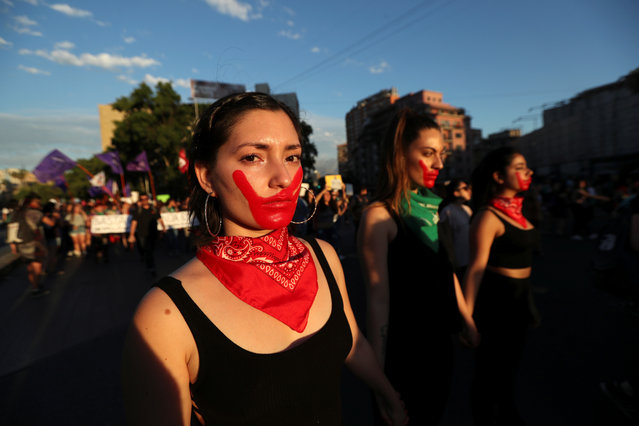 Demonstrators attend a march demanding an end to sexism and gender violence in Santiago, Chile on November 23, 2018. (Photo by Ivan Alvarado/Reuters) 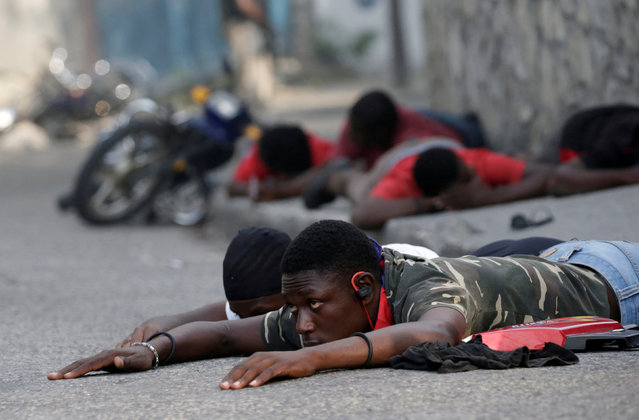 Protesters lie on the ground as they were briefly detained by the police during clashes at a demonstration called by opposition parties against the government, in the streets of Port-au-Prince, Haiti, November 23, 2018. (Photo by Andres Martinez Casares/Reuters) 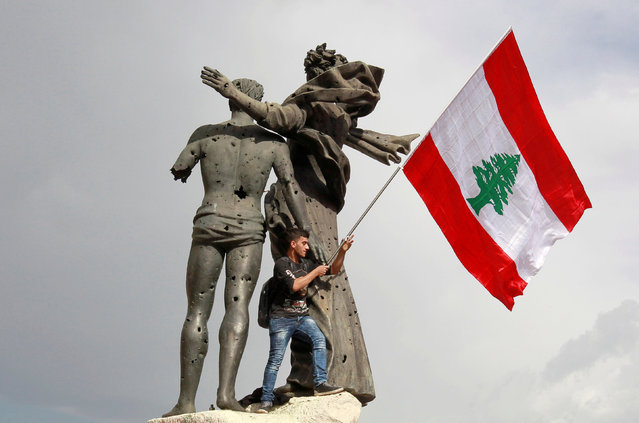 A man holds a Lebanese flag during a protest in Beirut, Lebanon November 22, 2018. (Photo by Aziz Taher/Reuters) 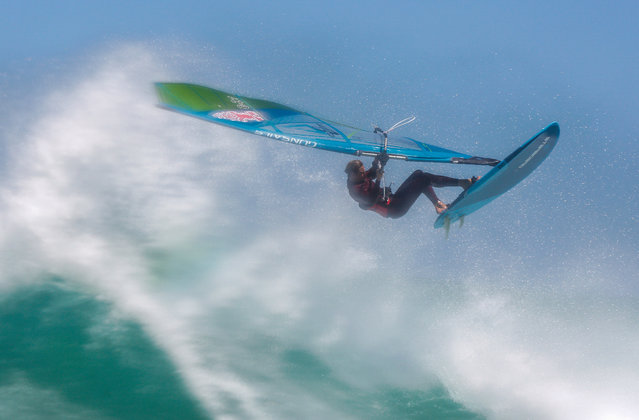 Professional windsurfer Florian Jung from Germany wavesails during a training session in Cape Town, South Africa 22 November 2018. Many top international sailors on the Professional Windsurfing Association (PWA) World Tour train in Cape Town during its summer months due to its consistantly strong winds and big waves. (Photo by Nic Bothma/EPA/EFE) 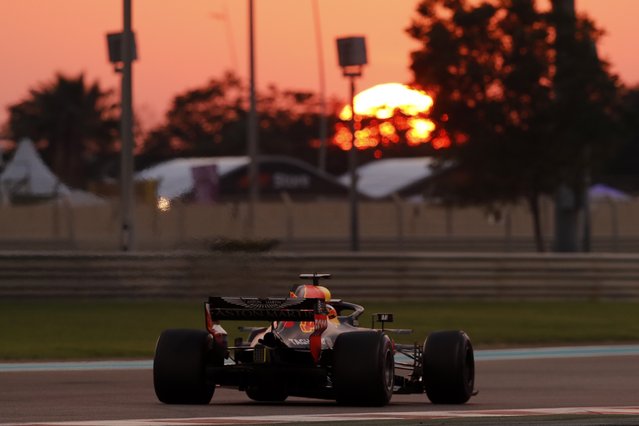 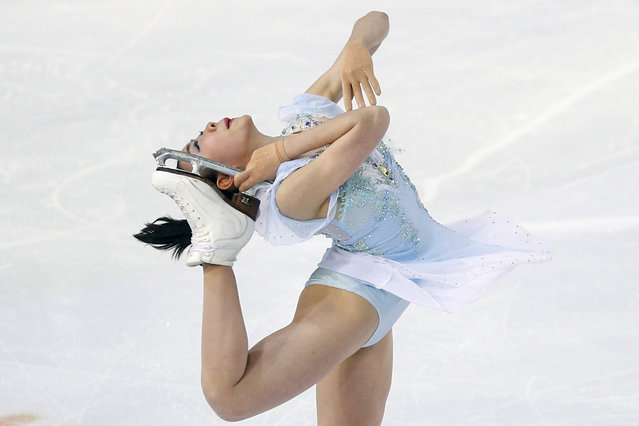 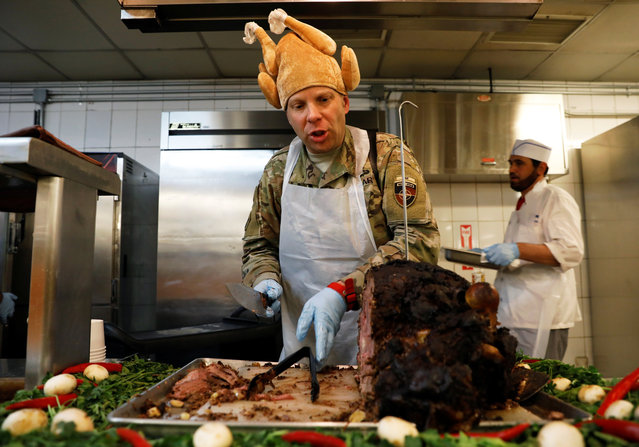 A U.S. Army soldier serves Thanksgiving meal to his comrades at the Resolute Support headquarters in Kabul, Afghanistan on November 22, 2018. (Photo by Mohammad Ismail/Reuters) 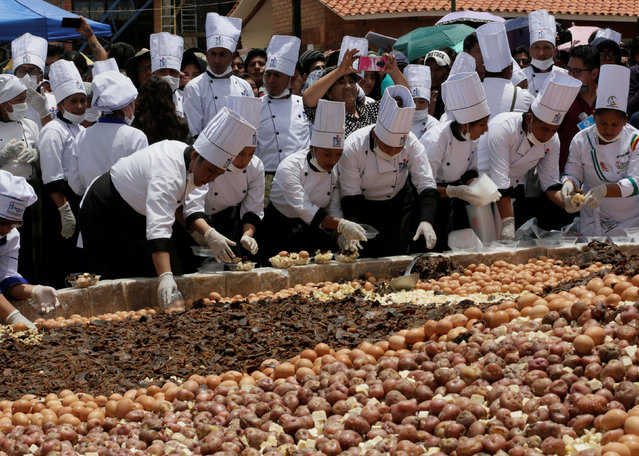 Cooks prepare a stew called Charquekan, made with llama meat, potatoes, eggs and cheese, during the inauguration ceremony at the World's Camelids Convention in Oruro, Bolivia, November 21, 2018. (Photo by David Mercado/Reuters) 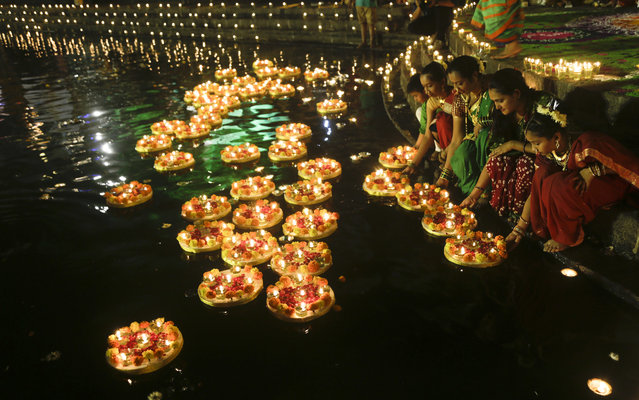 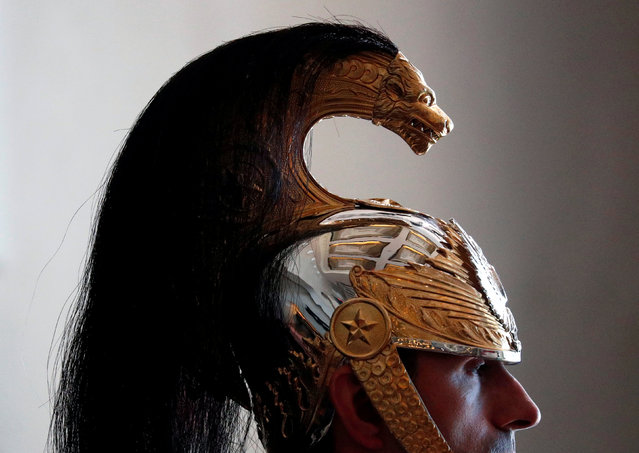 A Corazziere presidential guard is seen during the Rome Mediterranean summit MED 2018 in Rome, Italy November 22, 2018. (Photo by Max Rossi/Reuters) 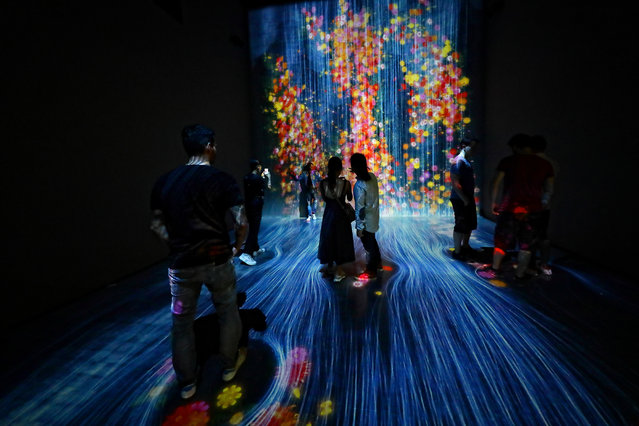 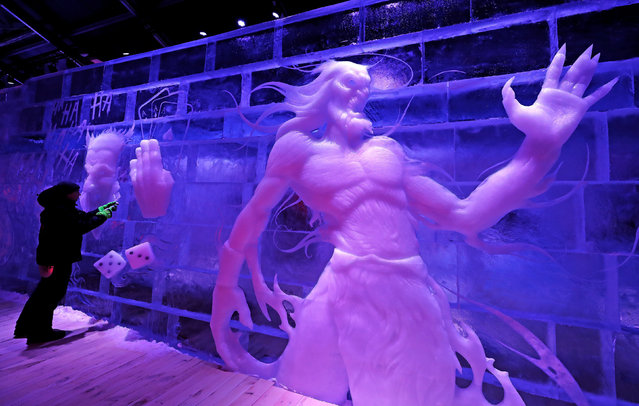 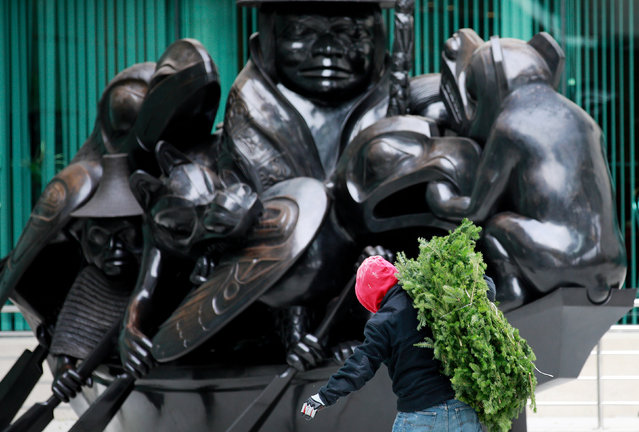 A worker carries garlands to be used for holiday decorations past the “Spirit of Haida Gwaii” sculpture by Canadian artist Bill Reid at the Canadian Embassy in Washington, DC, U.S. November 23, 2018. (Photo by Jim Young/Reuters) 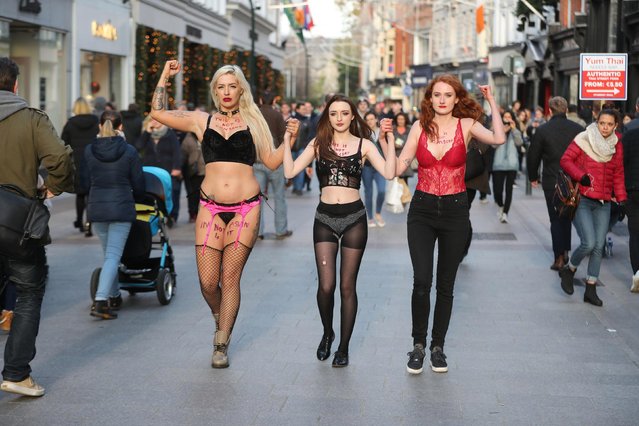 Protestors Stacie Ellen Murphy, Alanna Cassidy and Lena Seale walk in their Underwear on Grafton Street in Dublin, support of victims of sexual violence in Irerland. On Wednesday, November 16, 2018, in Dublin, Ireland. (Photo by PA Wire) 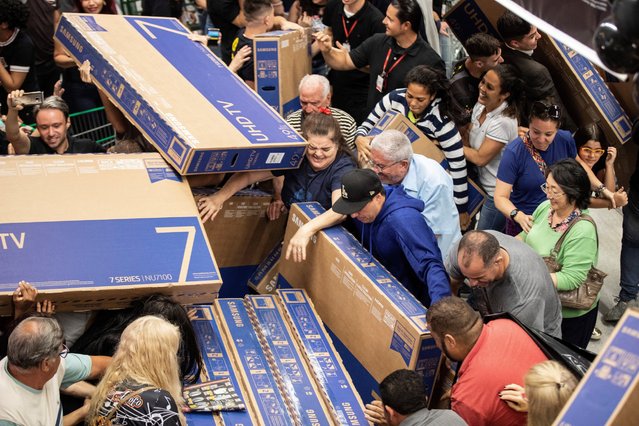