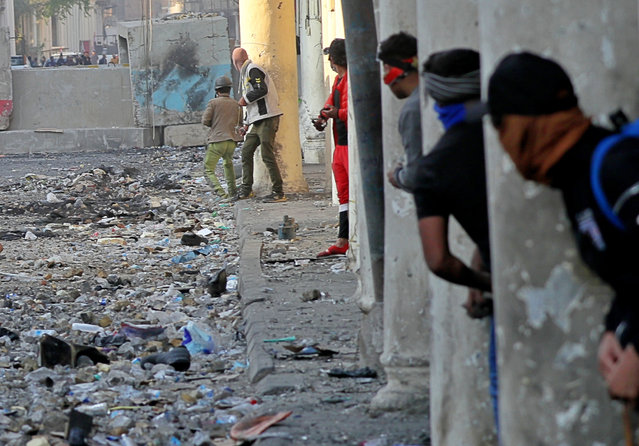 In this Sunday, November 24, 2019 file photo, demonstrators take cover during clashes between security forces and anti-government protesters in the historic Rasheed Street, Baghdad, Iraq. Baghdad’s Rasheed Street was the scene of large marches by Iraqis against British occupiers nearly a century ago and now it’s a front line in a new revolt. (Photo by Khalid Mohammed/AP Photo) 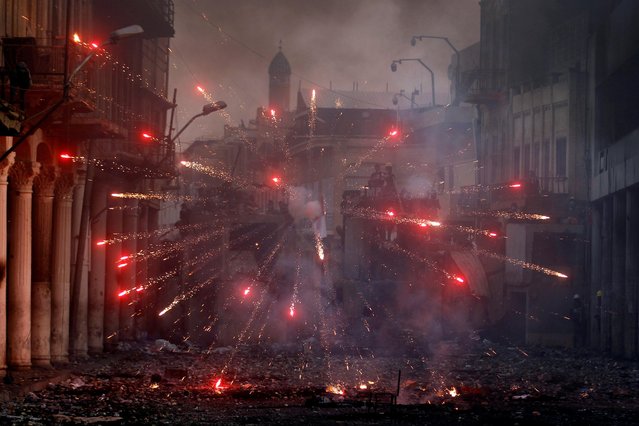 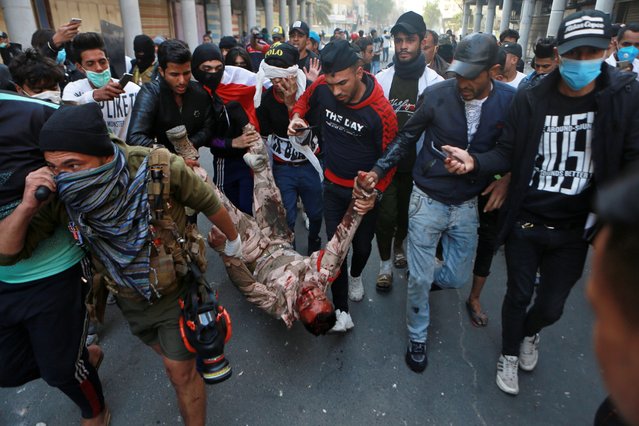 A soldier badly wounded during clashes with anti-government protesters is carried by demonstrators to a hospital during the ongoing protests in Rasheed Street, Baghdad, Iraq, Tuesday, November 26, 2019. (Photo by Khalid Mohammed/AP Photo) 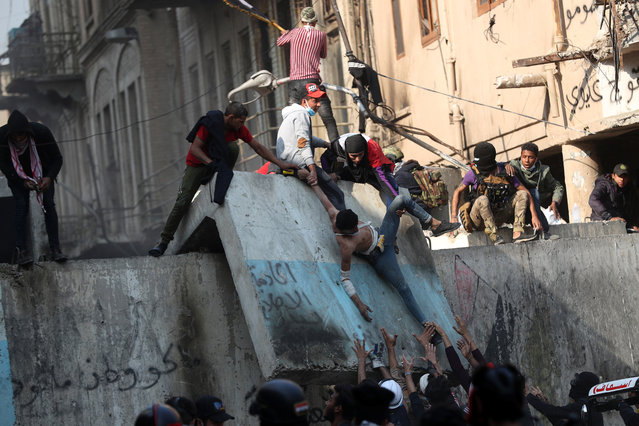 Iraqi demonstrators carry away a man affected by tear gas during the ongoing anti-government protests in Baghdad, Iraq on November 26, 2019. (Photo by Thaier al-Sudani/Reuters) 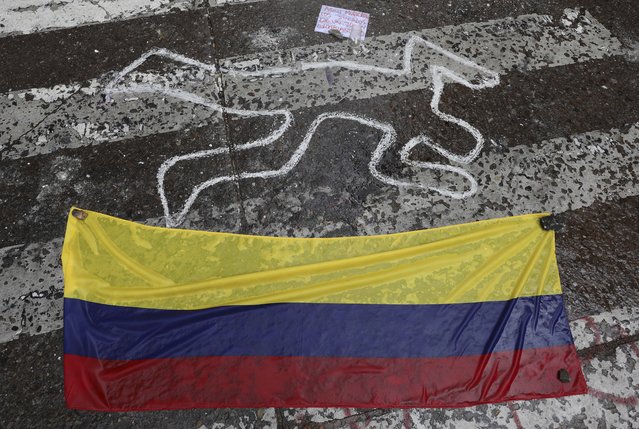 A Colombian national flag lays at the site where Dilan Cruz was injured during clashes between anti-government protesters and security forces, in Bogota, Colombia, Tuesday, November 26, 2019. Cruz, an 18-year-old high school student, died two days after being hit in the head by a projectile reportedly fired by riot police during a protest. His case has resonated in Colombian society, touching off a debate about excessive use of force and making him a symbol for many young protesters. (Photo by Fernando Vergara/AP Photo) 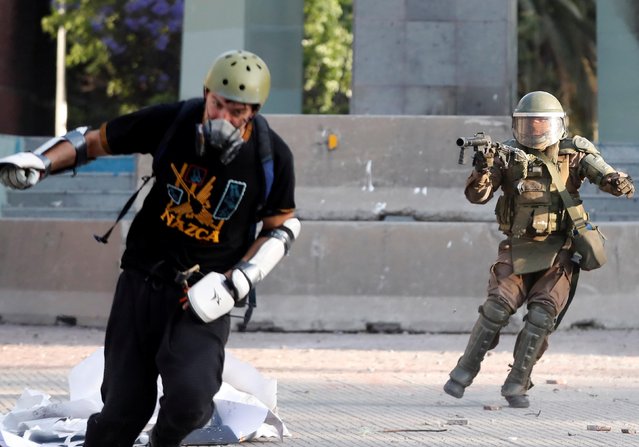 A policeman points a gas canister launcher at a demonstrator durning a protest against Chile's government in Santiago, Chile on November 25, 2019. (Photo by Goran Tomasevic/Reuters) 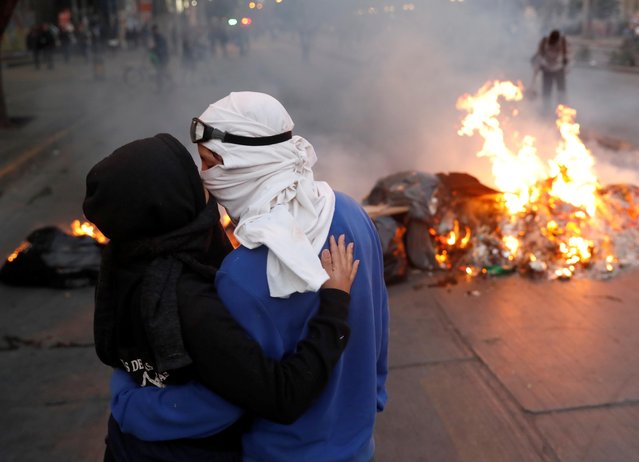 A masked couple of demonstrators kiss in front of a burning barricade during a protest against Chile's government in Santiago, Chile on November 25, 2019. (Photo by Goran Tomasevic/Reuters) 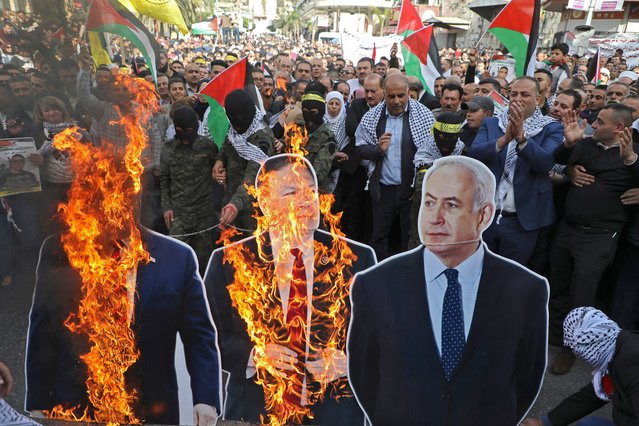 Palestinian protesters burn cardboard cutouts of US President Donald Trump, his State Secretary Mike Pompeo, and Israeli Prime Minister Benjamin Natanyahu, during a demonstration in the center of Nablus city in the occupied West Bank on November 26, 2019, against the US policy shift on Israeli settlements in Palestinian Territories. Pompeo announced last week that the United States no longer considers Israeli settlements in the West Bank and Israeli-annexed east Jerusalem illegal, a shift that came nearly two years after President Donald Trump overturned decades of policy by recognising the contested holy city of Jerusalem as Israel's capital, sparking Palestinian and Arab anger. (Photo by Jaafar Ashtiyeh/AFP Photo) 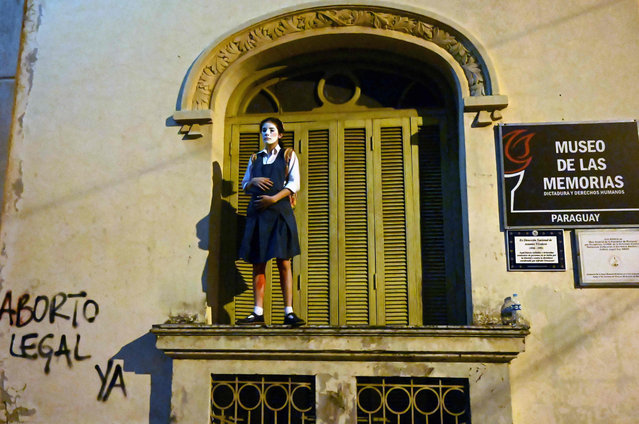 A woman performs next to a graffiti reading “Legal abortion now” during the commemoration of the International Day for the Elimination of Violence Against Women, in Asuncion, on November 25, 2019 (Photo by Norberto Duarte/AFP Photo) 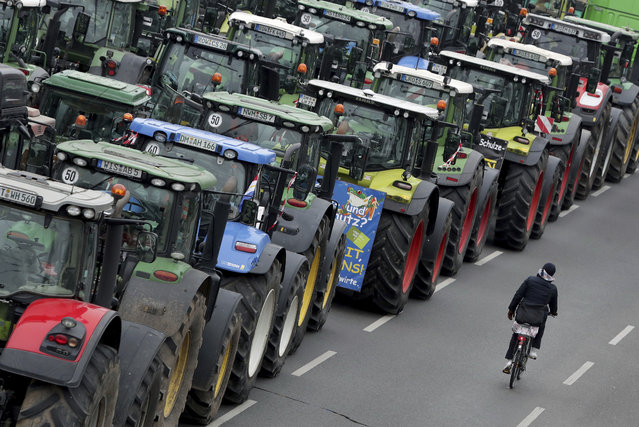 Farmers have parked their tractors on a road between the university and the Brandenburg Gate in Berlin, Germany, Tuesday, November 26, 2019. Some thousands farmers are expected in the German capital for a protest rally against the German and European agriculture policy. (Photo by Michael Sohn/AP Photo) 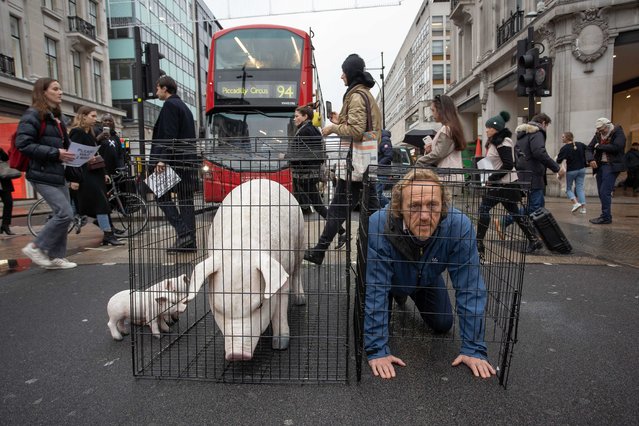 Jerome Flynn, who played Bronn on “Game of Thrones“, posed in a cage on London's Oxford Street on November 26, 2019 alongside the campaign group Farms Not Factories to raise awareness that most supermarkets and high street food chains are still sourcing their pork almost entirely from factory farms. Says Jerome "Factory Farming is one of the most horrific examples of how far we have strayed from our hearts in the relentless drive for profit and so called progress”. (Photo by Jeff Moore/Splash News and Pictures) 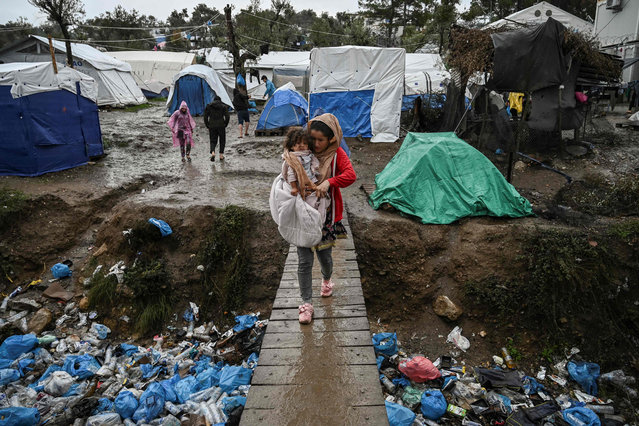 A womancarries her child as she crosses a wooden bridge in the refugee camp of Moria, on the island of Lesbos on November 26, 2019. Conditions remain difficult in the overcrowded Moria camp in Greece with winter fast approaching. The government announced on November 20it will shut down the three largest of its overcrowded migrant camps on islands facing Turkey, and replace them with new closed facilities with much larger capacity. (Photo by Aris Messinis/AFP Photo) 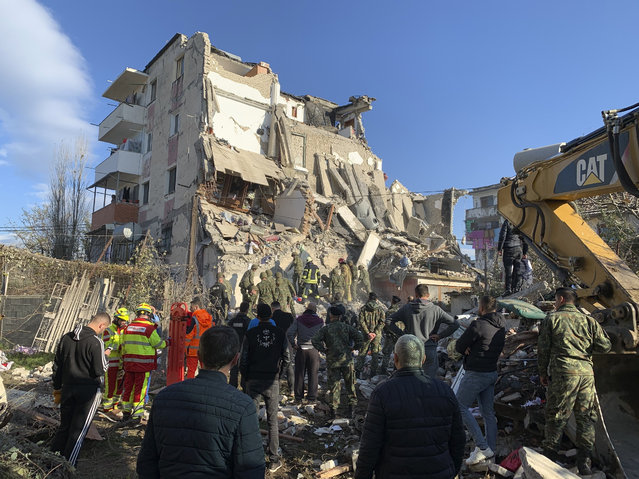 Rescuers search at a damaged building after a magnitude 6.4 earthquake in Thumane, western Albania, Tuesday, November 26, 2019. Rescue crews used excavators to search for survivors trapped in toppled apartment buildings after a powerful pre-dawn earthquake in Albania killed at least six people and injured more than 300. (Photo by Visar Kryeziu/AP Photo) 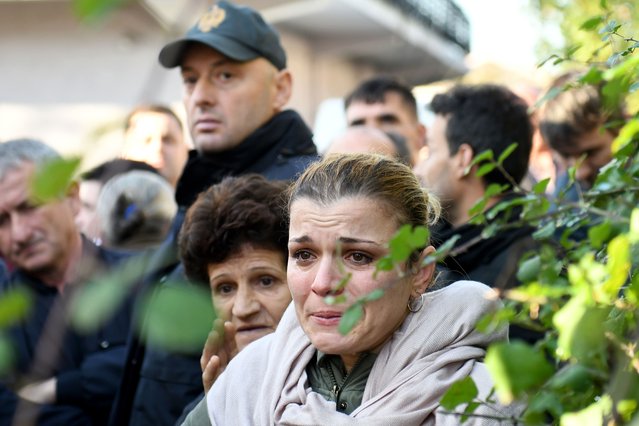 Relatives of people living at a collapsed building cry in Thumane, 34 kilometres (about 20 miles) northwest of capital Tirana, after an earthquake hit Albania, on November 26, 2019. Albanian rescuers were digging through rubble in search of survivors on November 26, 2019, after the strongest earthquake in decades claimed at least 13 lives, with victims trapped in the debris of toppled buildings. The 6.4 magnitude quake struck at 3:54 am local time (0254 GMT), with an epicentre 34 kilometres (about 20 miles) northwest of the capital Tirana in the Adriatic Sea, according to the European-Mediterranean Seismological Centre. (Photo by Gent Shkullaku/AFP Photo)
Edit Del
28 Nov 2019 00:05:00, post received 0 comments
Publication archive:
←   →
Popular tags:
All tags
Last searches: