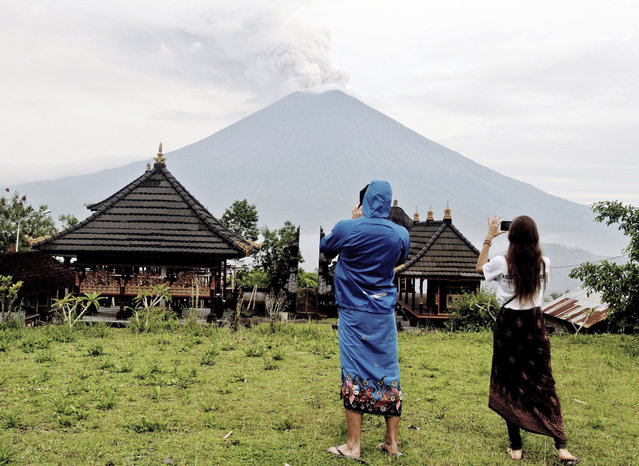 Foreign tourists take pictures of Mount Agung as it erupts in Karangasem, Bali, Indonesia, Wednesday, November 29, 2017. Authorities have told tens of thousands of people to leave an area extending 10 kilometers (6 miles) from the volcano as it belches volcanic materials into the air. Mount Agung's last major eruption in 1963 killed about 1,100 people. (Photo by Lukman S. Bintoro/AP Photo) 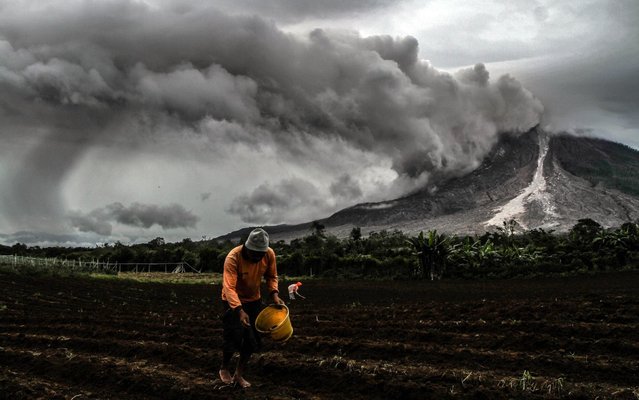 Indonesian farmers work in farmland near Mount Sinabung volcano in Karo, Indonesia on November 29, 2017. Many residents in the area have been forced to relocate to other villages of Northern Sumatra at a safer distance from mount Sinabung volcano, one of the most active in Indonesia. Mount Sinabung roared back to life in 2010 for the first time in 400 years, after another period of inactivity it erupted once more in 2013, and has remained highly active since. (Photo by Ivan Damanik/ZUMA Wire/Rex Features/Shutterstock) 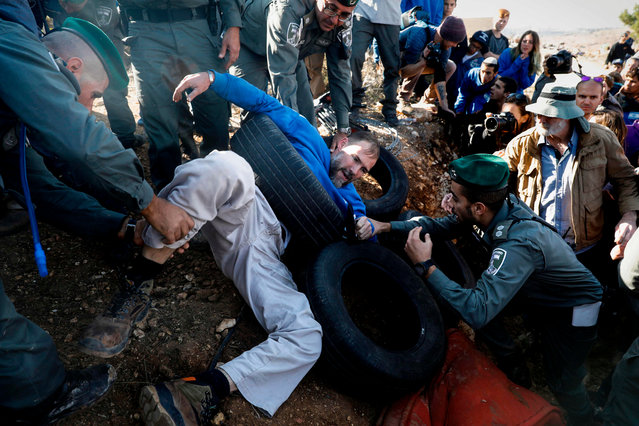 Israeli policemen evacuate Jewish settlers who barricaded themselves inside an illegally- built structure on private Palestinian land to prevent its demolition, in the Jewish settlement of Elazar south of Bethlehem in the occupied West Bank, on November 29 2017. (Photo by Menahem Kahana/AFP Photo) 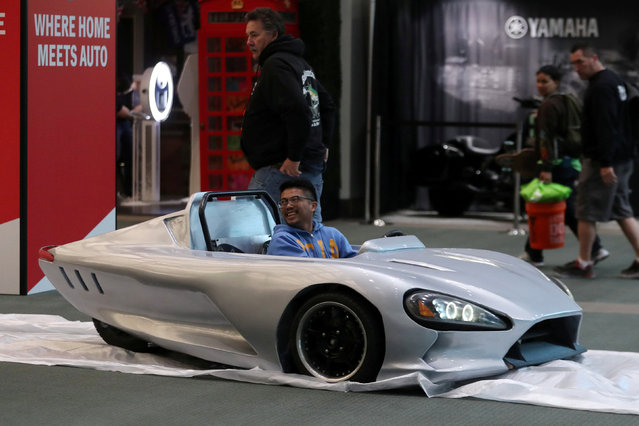 An exhibitor drives an electric vehicle through the convention center to their booth as car companies set up their products for the Auto Show in Los Angeles, California, U.S., November 28, 2017. (Photo by Mike Blake/Reuters) 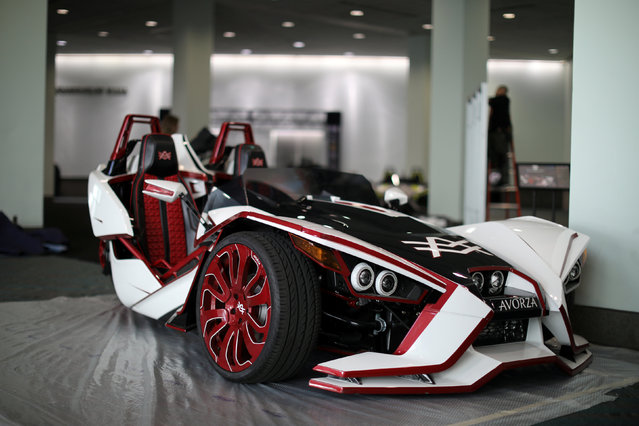 A car is displayed outside the Convention Center floor before the Los Angeles Auto Show in Los Angeles, California U.S. November 28, 2017. (Photo by Lucy Nicholson/Reuters) 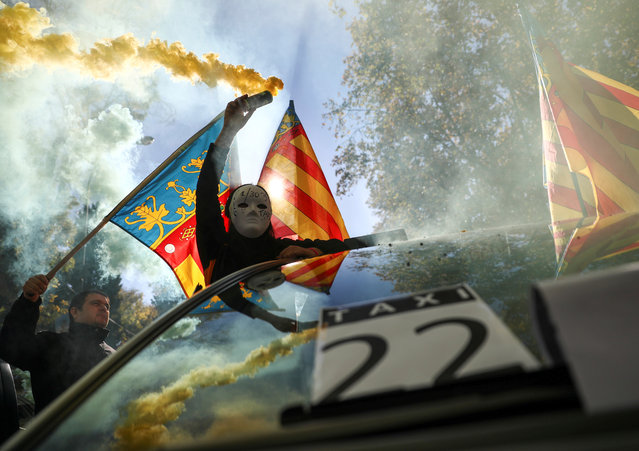 A masked protestor holds a smoke bomb during a strike by taxi drivers to protest what they say is unfair competition from new car sharing companies such as Uber and Cabify, in Madrid, Spain on November 29, 2017. (Photo by Juan Medina/Reuters) 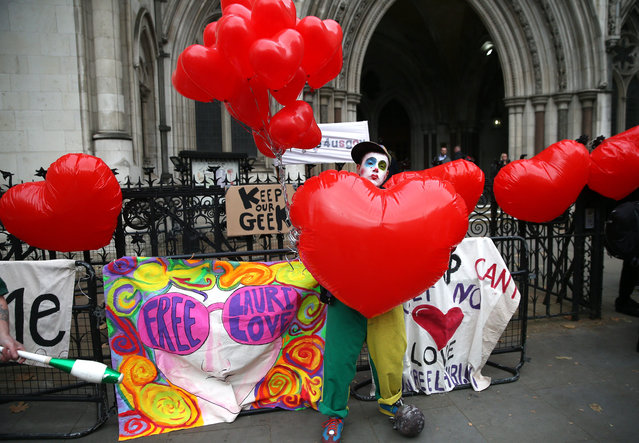 Supporters of alleged British computer hacker Lauri Love protest at the Royal Courts of Justice in the Strand, central London, Britain, 29 November 2017. Love is appealling the decision of his extradition to the United States, where he is wanted on three warrants from the US districts of New York, Eastern District of Virginia and New Jersey. Love is accused of hacking into US government agencies, including the US Federal Reserve, NASA and the US Army. (Photo by Neil Hall/EPA/EFE) 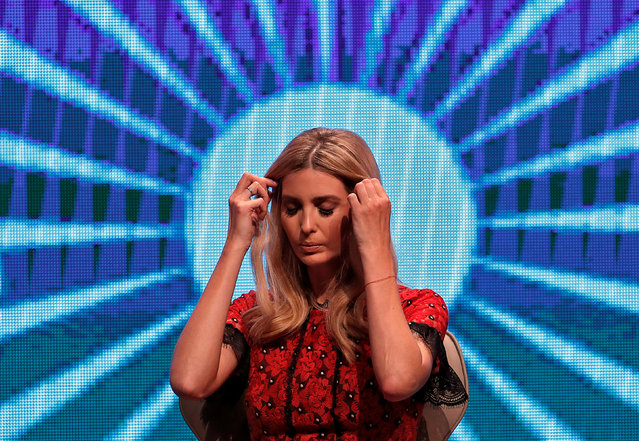 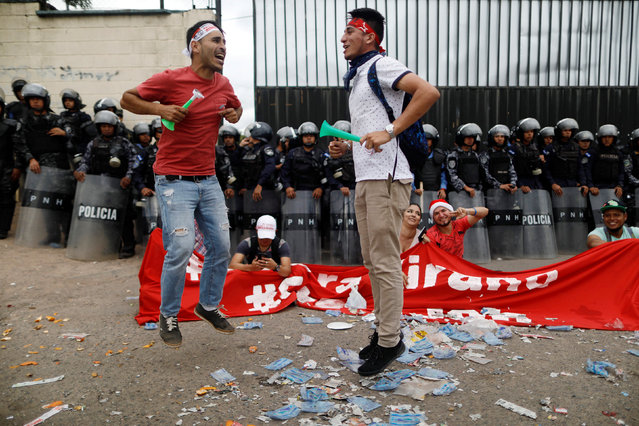 Supporters of Salvador Nasralla, presidential candidate for the Opposition Alliance Against the Dictatorship, jump in front of riot police while waiting for official presidential election results outside the warehouse of the Supreme Electoral Tribunal in Tegucigalpa, Honduras, November 29, 2017. (Photo by Edgard Garrido/Reuters) 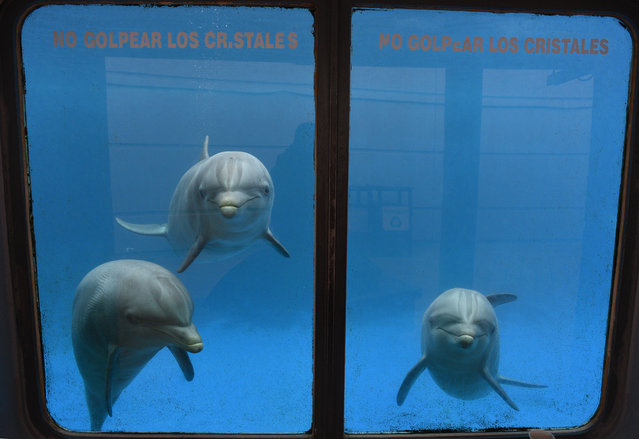 Nuns prepare their devices to film Pope Francis before he arrives for a meeting with the bishops of Myanmar at St. Mary's Cathedral in Yangon on November 29, 2017.
Pope Francis spread a message of forgiveness in a historic open-air mass before a sea of worshippers in Yangon on on November 29, during a visit to conflict-torn Myanmar that has been framed so far by his public sidestepping of the Rohingya crisis. (Photo by Andrew Medichini/AFP Photo) 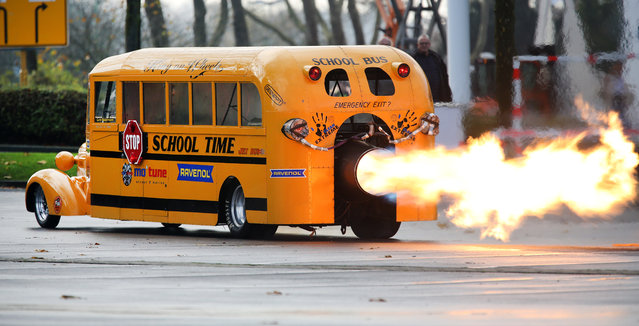 Car designer Gerd Habermann launches his “School Bus Jet” vehicle during a preview of the Essen Motor Show on November 29, 2017 in Essen, western Germany. The racing bus is powered by a 25,000 hp strong turbine. It is on display during the motor show running from December 2 to 10, 2017. (Photo by Roland Weihrauch/AFP Photo/DPA) 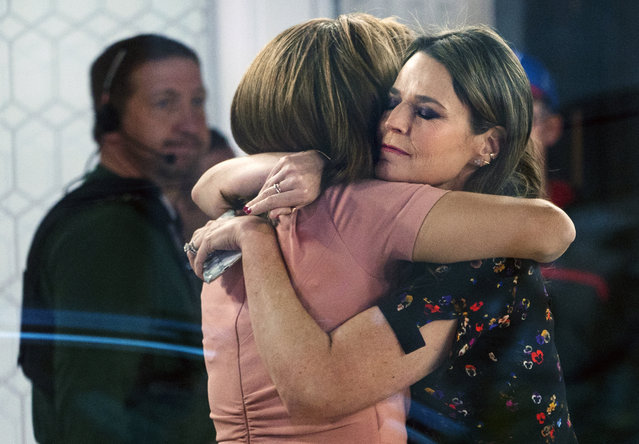 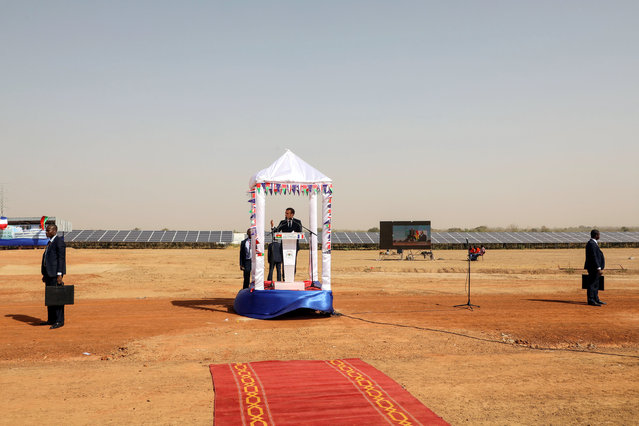 French president Emmanuel Macron delivers a speech during the inauguration ceremony of the solar energy power plant in Zaktubi, near Ouagadougou, on november 29, 2017, on the second day of his first African tour since taking office. (Photo by Reuters/Stringer) 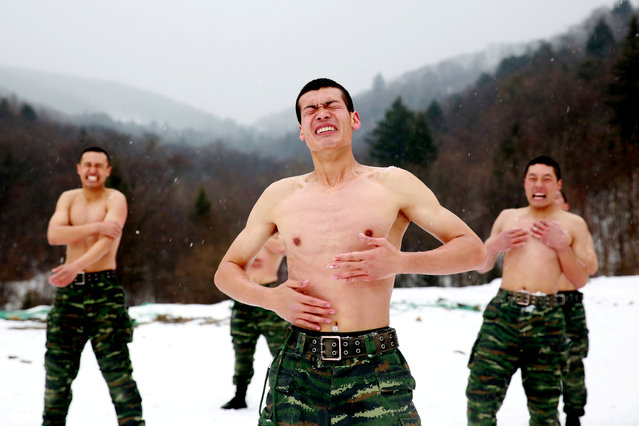 Paramilitary soldiers put snow onto their bodies in a temperature around negative 25 degrees Celsius (minus 13 degrees Fahrenheit) during a winter training session at a snowfield in Changchun, Jilin province, China November 28, 2017. (Photo by Reuters/China Stringer Network) 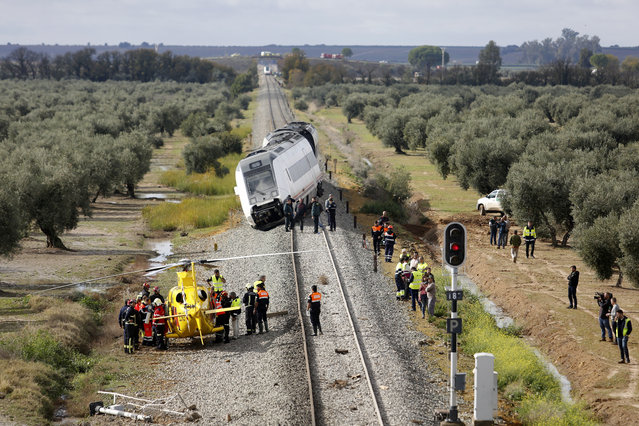 A train carriage is seen derailed near the town of Arahal, in the Seville province, Spain, Wednesday, November 29, 2017. Spanish officials said 27 people were injured Wednesday when a train carriage derailed after part of a track became flooded between the southern cities of Malaga and Seville. (Photo by Toni Rodriguez/AP Photo) 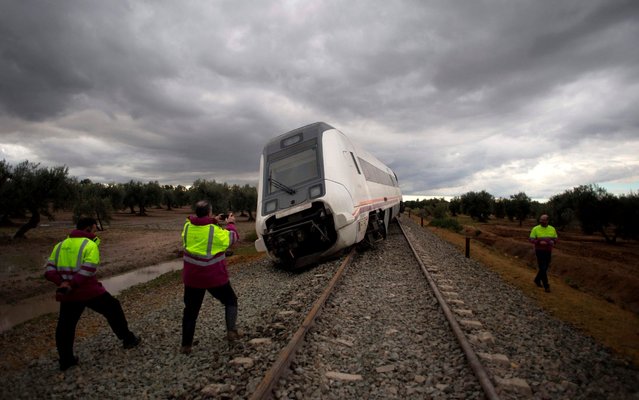 Technicians of the Spanish state- owned rail company Renfe take pictures of a derailed train at Arahal, near Sevilla, on November, 29, 2017. A middle distance train travelling from Malaga to Seville with 79 passengers on board left 35 injured after derailing due to heavy rains. (Photo by Jorge Guerrero/AFP Photo) 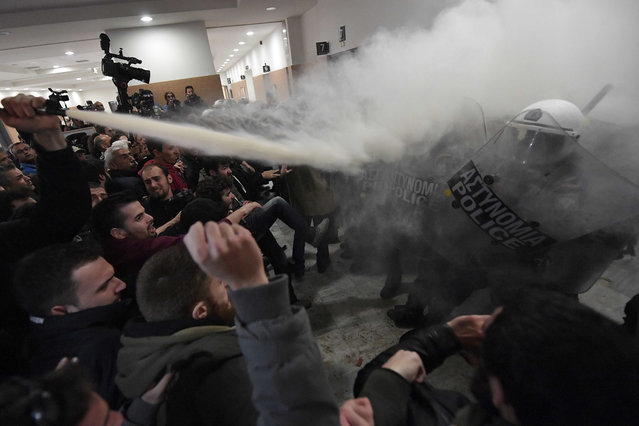 Protesters clash with riot police in the lobby of a courtroom in Athens on November 29, 2017. People protesting homes' auctions clashed with police at Athens court of appeals as foreclosures begin anew as part of reforms under Greece's bailout plans. (Photo by Louisa Gouliamaki/AFP Photo) 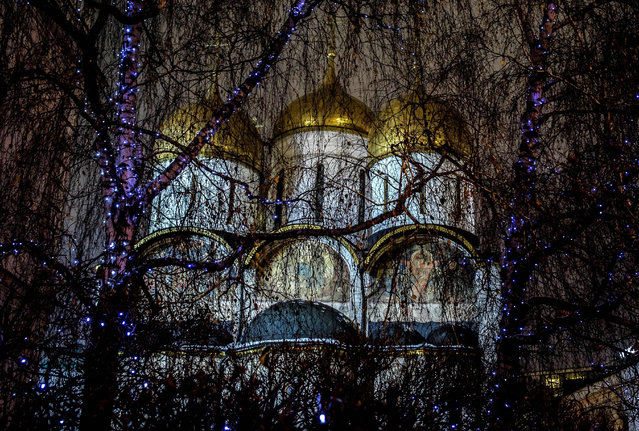 A Kremlin cathedral is seen behind iluminated trees in downtown Moscow on November 29, 2017. (Photo by Mladen Antonov/AFP Photo) 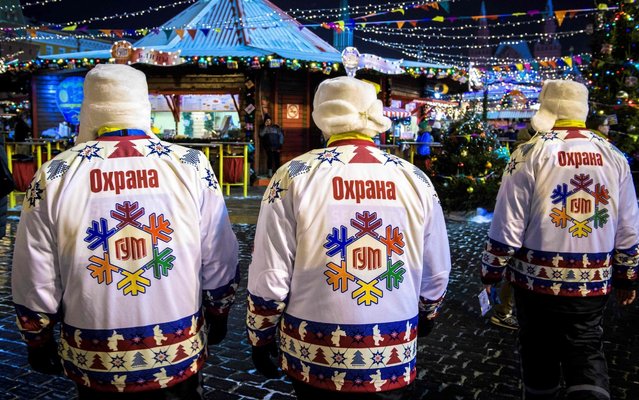 Security guards walk over a Christmas market at Red Square in downtown Moscow on November 29, 2017. (Photo by Mladen Antonov/AFP Photo) 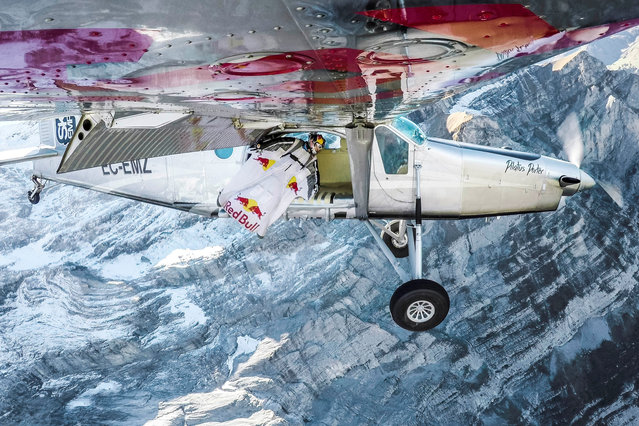 A member of the wingsuit flyers duo, known as the Soul Flyers, is seen in mid-air as he catches up and flies into the open door of Pilatus Porter plane, piloted by Philippe Bouvier, after B.A.S.E. jumping off the Jungfrau mountain, 4158 meters, in Lauterbrunnen, Switzerland, October 13, 2017. French athletes Fred Fugen and Vince Reffet had 2.45 minutes and a free fall distance of 3200 meters to complete their project “Door In The Sky”, coordinated by Yves Rossy know as the “Jetman”. (Photo by Thibault Gachet/Reuters)
Edit Del
30 Nov 2017 08:39:00, post received 0 comments
Publication archive:
←   →
Popular tags:
All tags
Last searches: