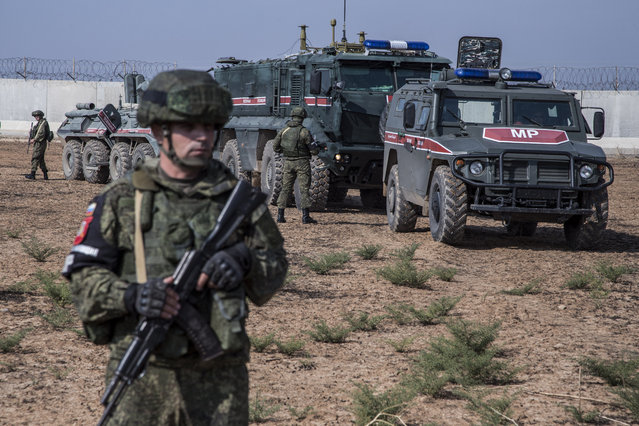 Turkish and Russian patrol is seen near the town of Darbasiyah, Syria, Friday, November 1, 2019. Turkey and Russia launched joint patrols Friday in northeastern Syria, under a deal that halted a Turkish offensive against Syrian Kurdish fighters who were forced to withdraw from the border area following Ankara's incursion. (Photo by Baderkhan Ahmad/AP Photo) 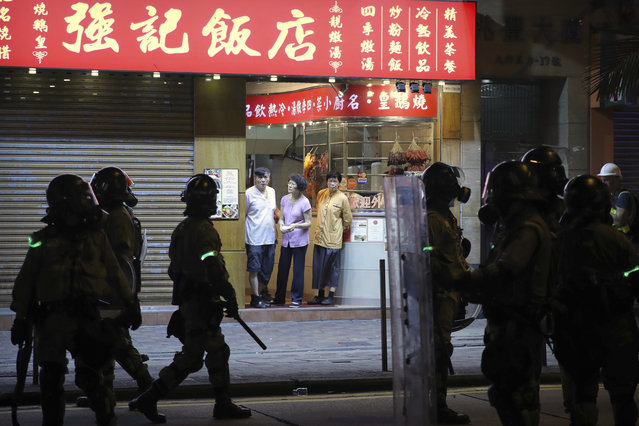 Onlookers stand in the entrance of a restaurant as police in riot gear gather during a protest in Hong Kong, Saturday, November 2, 2019. Pro-democracy protesters attacked the office of Chinese news agency Xinhua for the first time Saturday, after familiar chaos downtown that saw police and demonstrators trading petrol bombs, tear gas and water cannon in the 22nd straight weekend of unrest. (Photo by Kin Cheung/AP Photo) 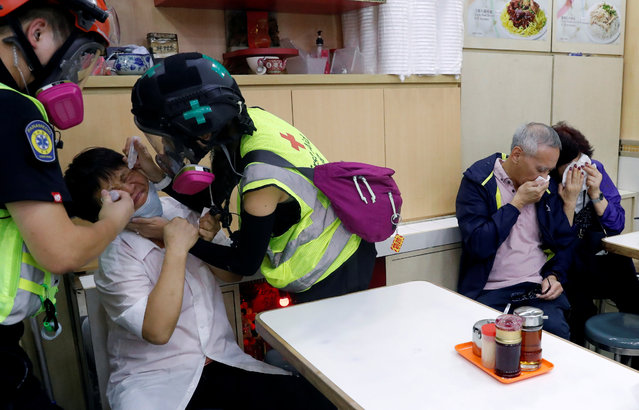 People receive help from first aid volunteers after the police fired tear gas to disperse anti-government protesters, at a restaurant during a march billed as a global “emergency call” for autonomy, in Hong Kong, China on November 2, 2019. (Photo by Tyrone Siu/Reuters) 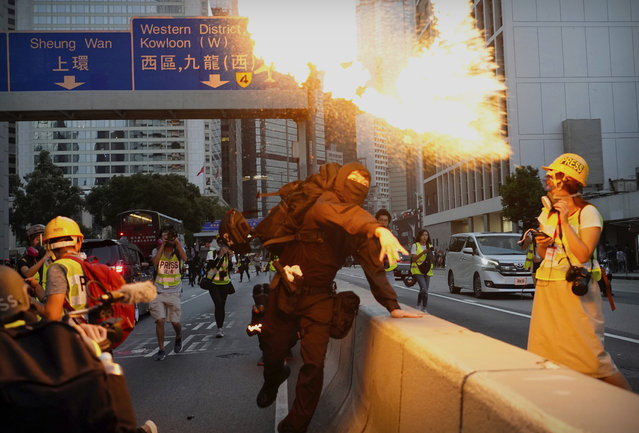 A demonstrator hurls a firebomb during a protest in Hong Kong, Saturday, November 2, 2019. Anti-government protesters attacked the Hong Kong office of China's official Xinhua News Agency for the first time Saturday after chaos broke out downtown, with police and demonstrators trading gasoline bombs and tear gas as the protest movement approached the five-month mark. (Photo by Vincent Yu/AP Photo) 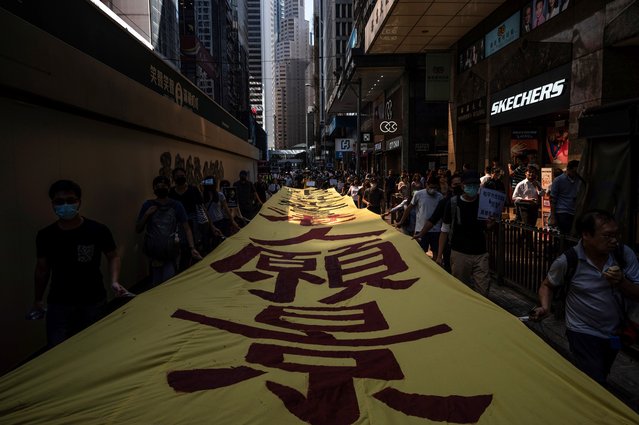 People carry a banner during a pro-democracy “flash mob” rally at lunchtime in the Central district in Hong Kong on November 1, 2019. The semi-autonomous Chinese city has been upended by nearly five months of huge, often violent, pro-democracy demonstrations with little end in sight as Beijing and city leaders adopt a hardline approach. (Photo by Philip Fong/AFP Photo) 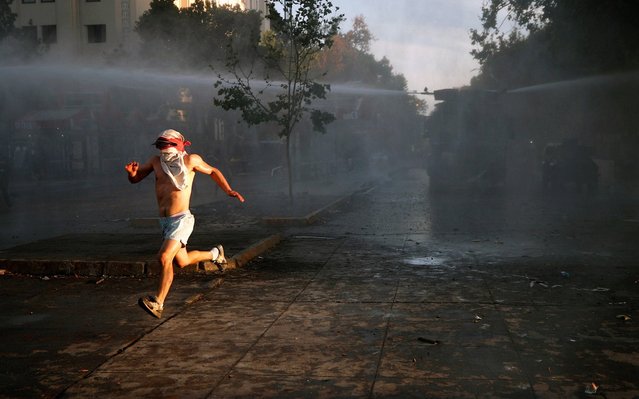 A demonstrator runs away from a vehicle with water cannons during protests against the Government of Sebastian Pinera, at Plaza Italia in Santiago, Chile, 31 October 2019. Ongoing anti-government protests were sparked early in the month after the government announced a price rise in metro tickets. (Photo by Alberto Valdes/EPA/EFE/Rex Features/Shutterstock) 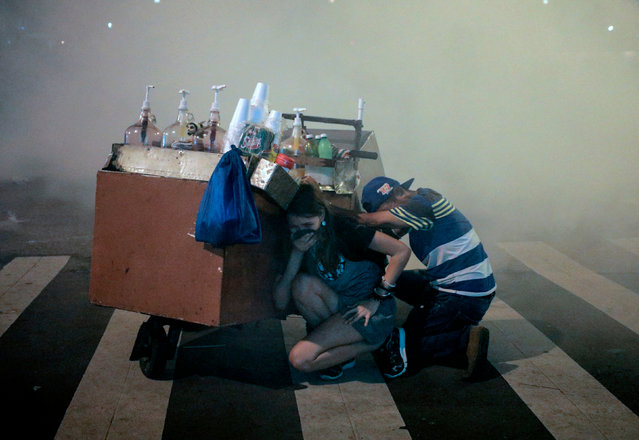 Vendors protect themselves from tear gas as students clash with riot police following a protest against proposed constitutional reforms in Panama City, on October 31, 2019. The reform would include privatizing higher education and giving Congress more power. (Photo by Mauricio Valenzuela/AFP Photo) 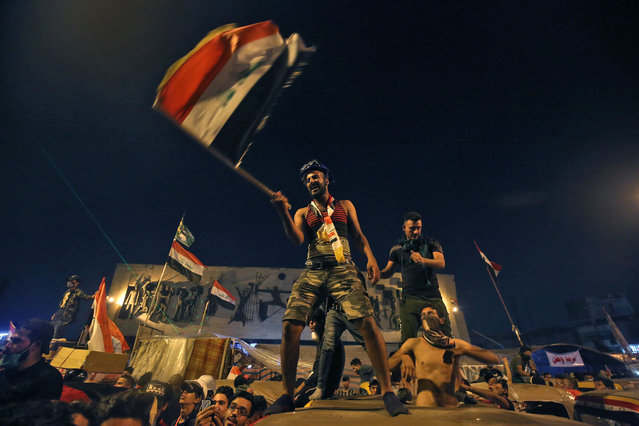 Iraqi protesters gather at Tahrir square during ongoing anti-government demonstrations in the capital Baghdad on October 31, 2019. Iraq's president vowed today to hold early elections in response to a month of deadly protests, but demonstrators said the move fell far short of their demands for a political overhaul. (Photo by Ahmad Al-Rubaye/AFP Photo) 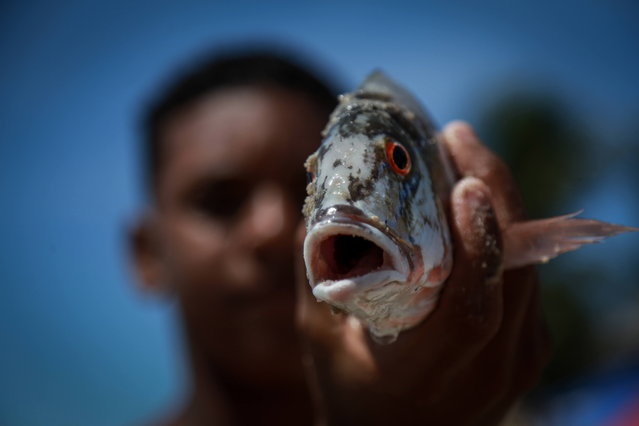 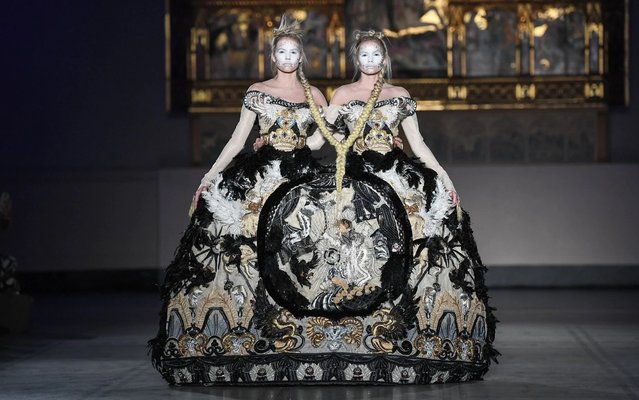 Models walk the runway during Guo Pei's first ever runway show in the UK, staged to celebrate the 20th anniversary of the V&amp;A's Fashion in Motion series on 01 November, 2019 in London, England. (Photo by James Veysey/Rex Features/Shutterstock) 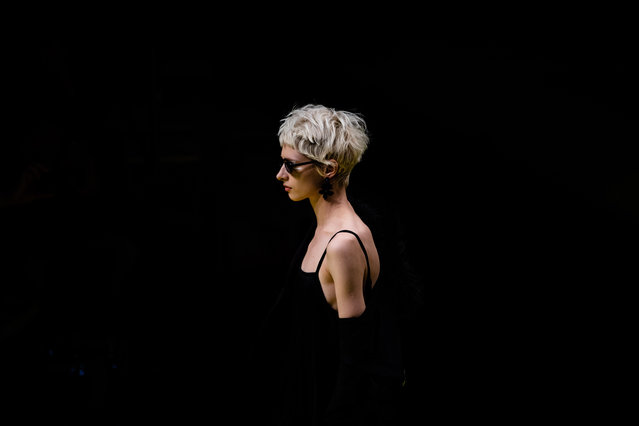 A model presents a creation at the GENIAL by Jinhao Zhang show during the China Fashion Week in Beijing, China, 01 November 2019​. The fashion event runs from 25 October to 02 November 2019. (Photo by Roman Pilipey/EPA/EFE) 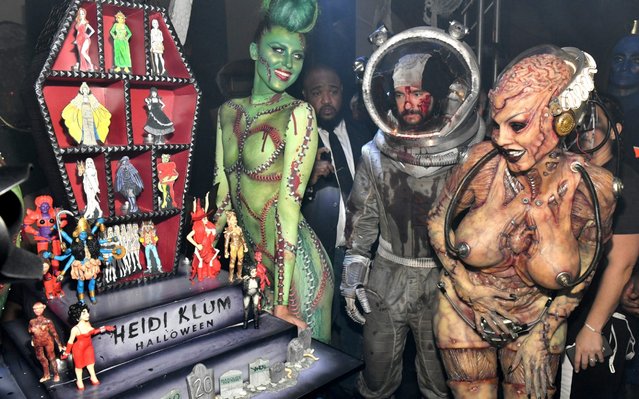