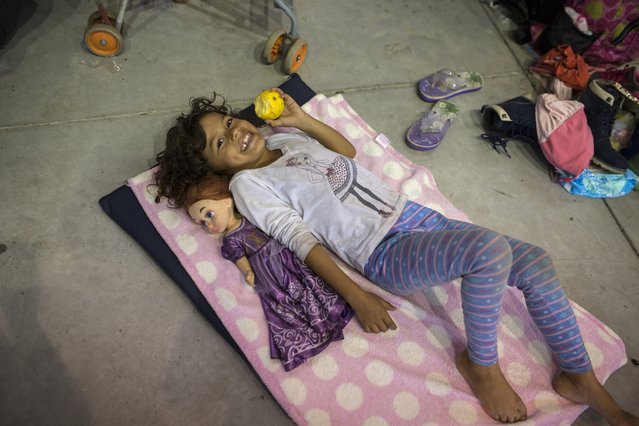 A girl relaxes next to her doll inside a temporary shelter set up for a splinter group of a migrant caravan hoping to reach the U.S. border, in Cordoba, Veracruz state, Mexico, Sunday, November 4, 2018. Thousands of wary Central American migrants resumed their push toward the United States on Sunday, entering a treacherous part of the caravan’s journey on a trek through one of Mexico’s deadliest states, along what some called the “route of death” toward the town of Cordoba, Veracruz. (Photo by Rodrigo Abd/AP Photo) 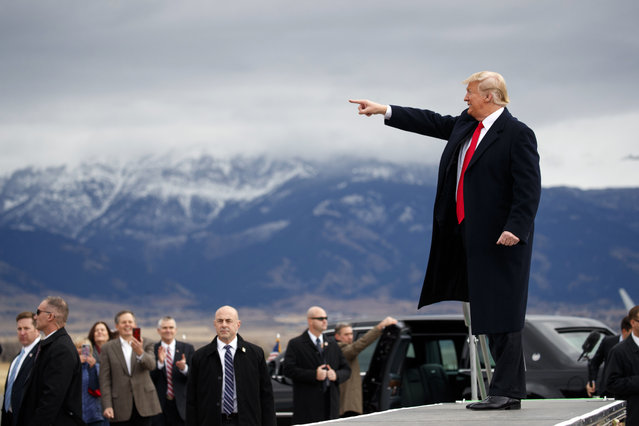 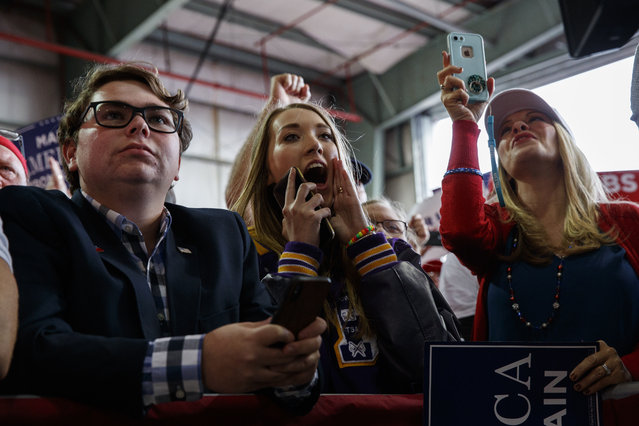 Supporters of President Donald Trump listen to him speak during a campaign rally, Sunday, November 4, 2018, in Macon, Ga. (Photo by Evan Vucci/AP Photo) 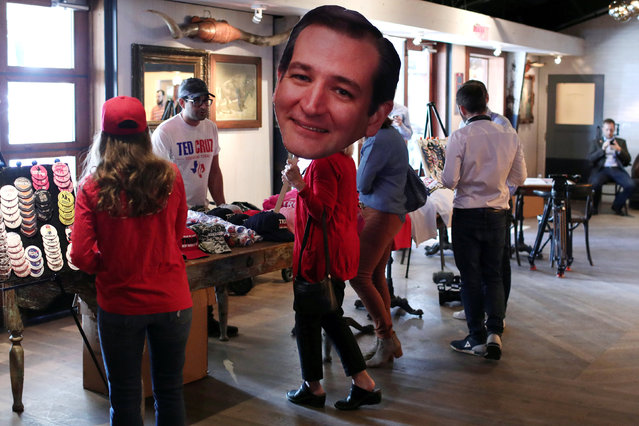 A woman holds a giant picture of U.S. Senator Ted Cruz (R-TX) at a “Women For Cruz” campaign event ahead of the 2018 midterm elections in Houston, Texas, U.S., November 3, 2018. (Photo by Mike Segar/Reuters) 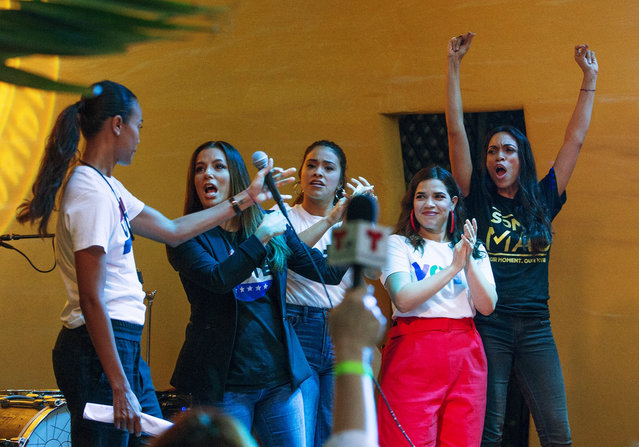 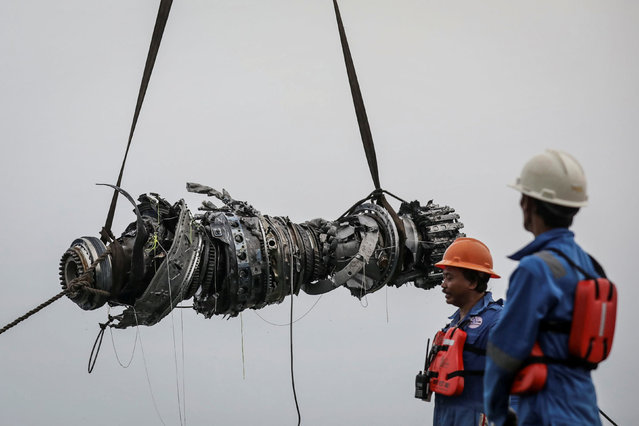 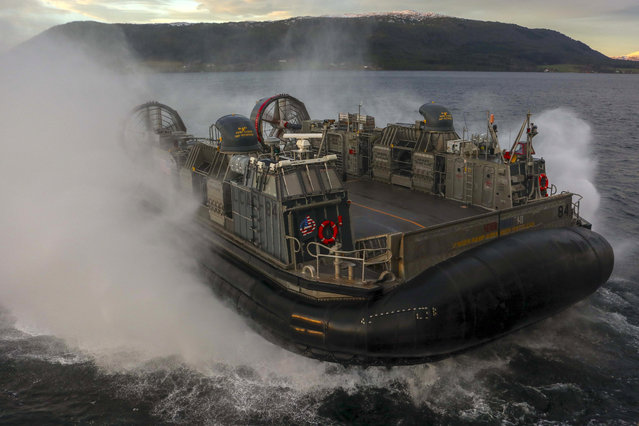 A handout photo made available by the US Navy on 02 November 2018 shows a landing craft, air cushion, assigned to Assault Craft Unit 4 (ACU 4) and attached to the San Antonio-class amphibious transport dock ship USS New York (LPD 21), transits in the Norwegian Sea on 01 November 2018. According to reports, some 50,000 participants from over 30 nations are expected to take part in the NATO-led military exercise in Norway from 25 October to 23 November 2018. (Photo by Petty Officer 2nd Class Lyle Wil/EPA-EFE) 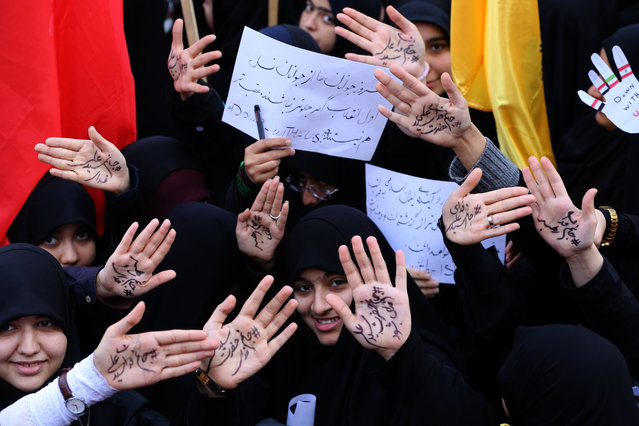 Iranian girls take part in a demonstration outside the former US embassy in the Iranian capital Tehran on November 4, 2018, marking the anniversary of its storming by student protesters that triggered a hostage crisis in 1979. Farsi writing on their palms praising the supreme leader Ayatollah Ali Khamenei. Thousands joined rallies in Tehran and other Iranian cities, carrying placards that mocked President Donald Trump, wiping their feet on fake dollar bills, and engaging in the usual ritual of burning the US flag. (Photo by Atta Kenare/AFP Photo) 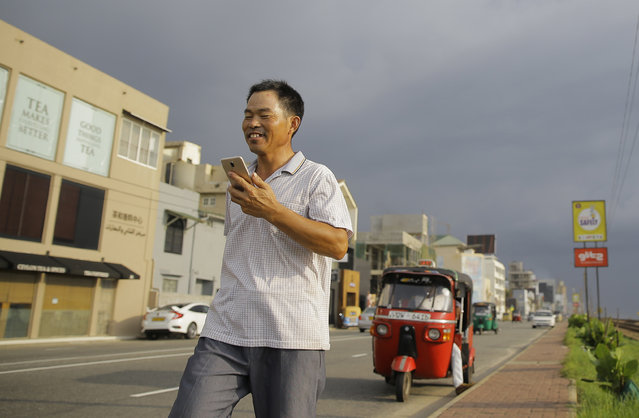 In this Saturday, November 3, 2018, photo, a Chinese man walks along a street while speaking on his mobile phone in Colombo, Sri Lanka. China and India are closely watching the constitutional crisis in Sri Lanka, the latest venue for their struggle for geopolitical supremacy in South Asia. (Photo by Eranga Jayawardena/AP Photo) 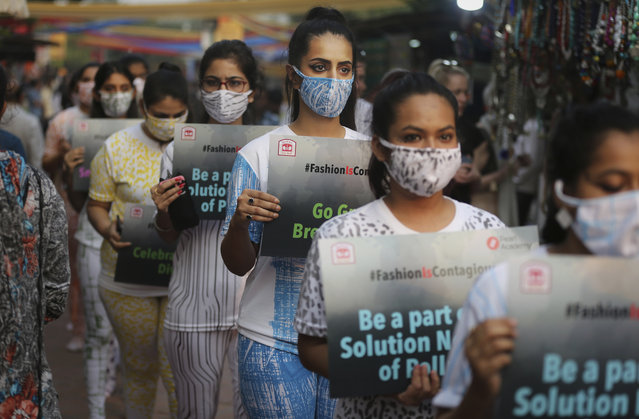 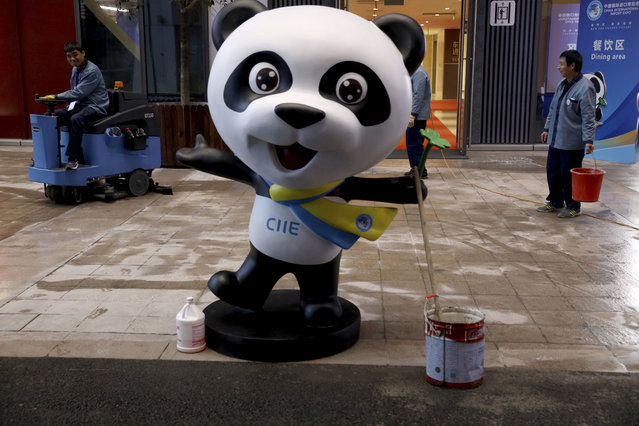 Workers clean the floor near a mascot of the China International Import Expo on the eve of its opening in Shanghai, Sunday, November 4, 2018. Facing a blizzard of trade complaints, China is throwing an “open for business” import fair hosted by President Xi Jinping to rebrand itself as a welcoming market and positive global force. (Photo by Ng Han Guan/AP Photo) 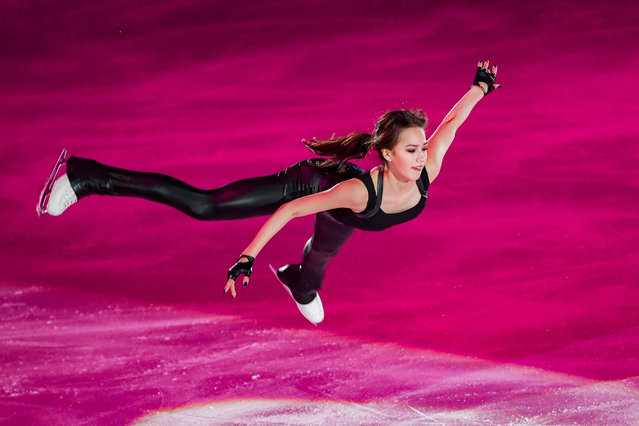 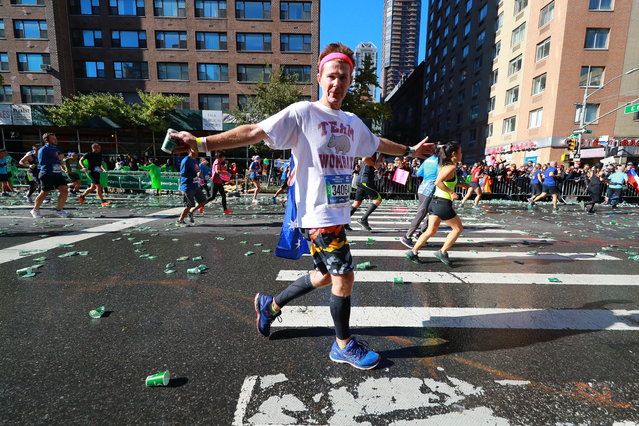 A participant shows off for the camera during the 2018 New York City Marathon, November 4, 2018. (Photo by Gordon Donovan/Yahoo News) 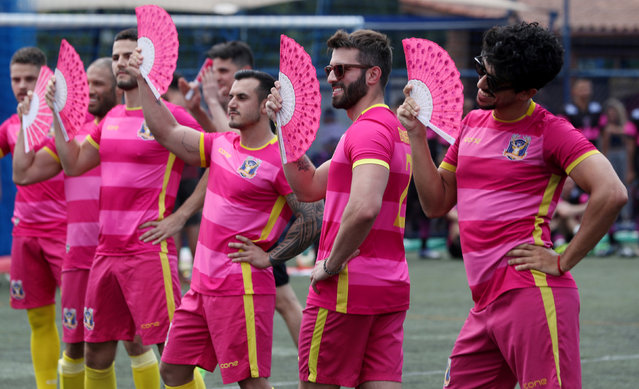 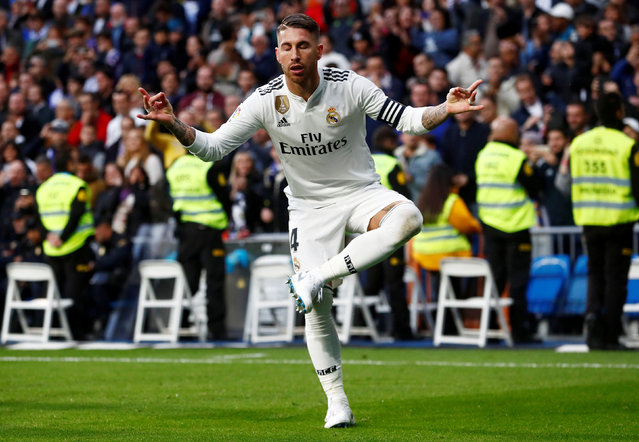 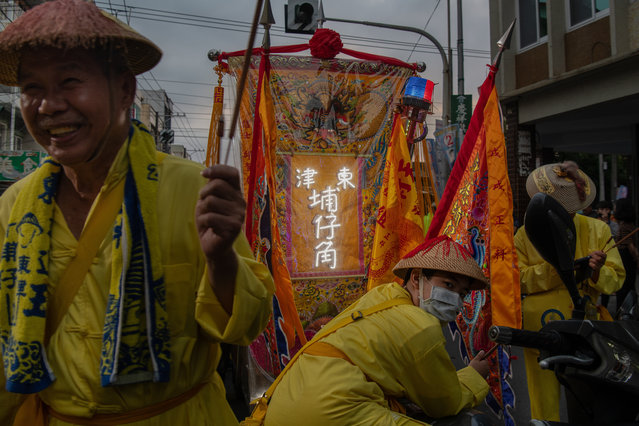 Local residents participate the Pingtung Wang Yeh Boat-Burning Festival on November 3, 2018 in Pingtung, Taiwan. The Pingtung Wang Yeh Boat-Burning Festival is held, over a period of eight days, every three years in southern Taiwan to commemorate the King Ye presence in Donggang, which is believed to ward off evil and diseases. (Photo by Billy H.C. Kwok/Getty Images) 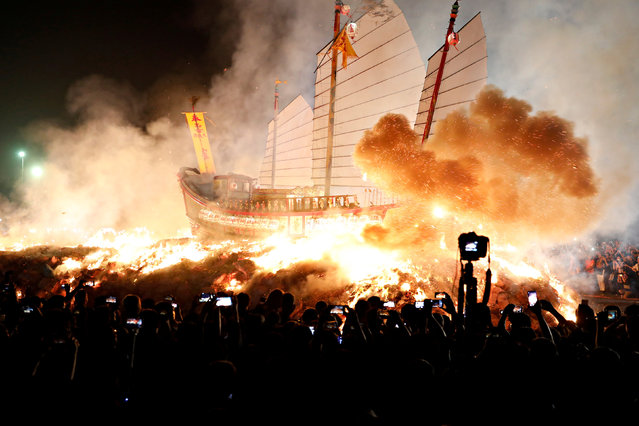 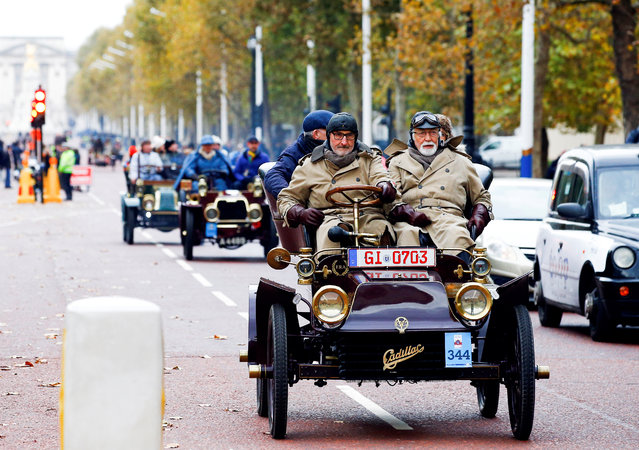 Participants in the London to Brighton Veteran Car Run make their way down The Mall, in London, Britain November 4, 2018. (Photo by Henry Nicholls/Reuters) 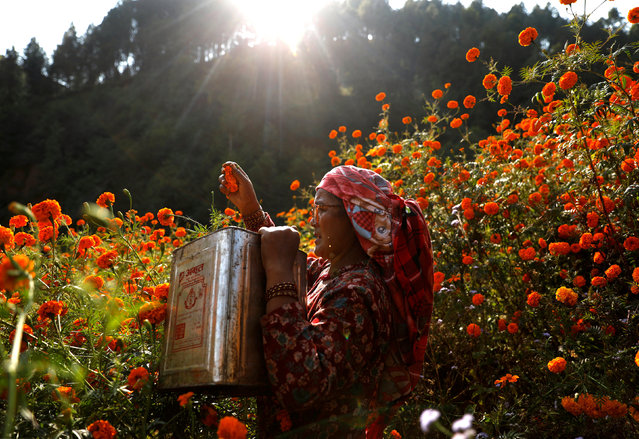 A woman picks marigold flowers, used to make garlands and offer prayers, before selling them to the market for the Tihar festival, also called Diwali, in Kathmandu, Nepal November 4, 2018. (Photo by Navesh Chitrakar/Reuters) 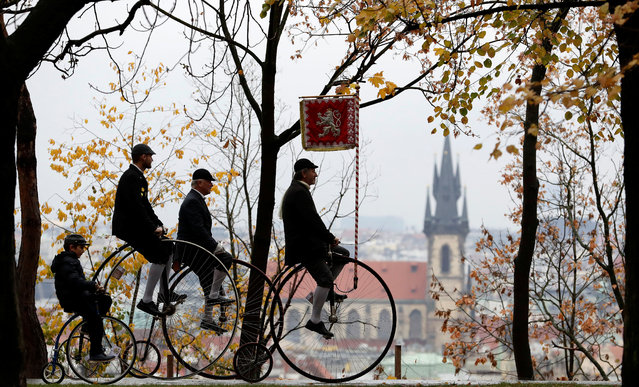 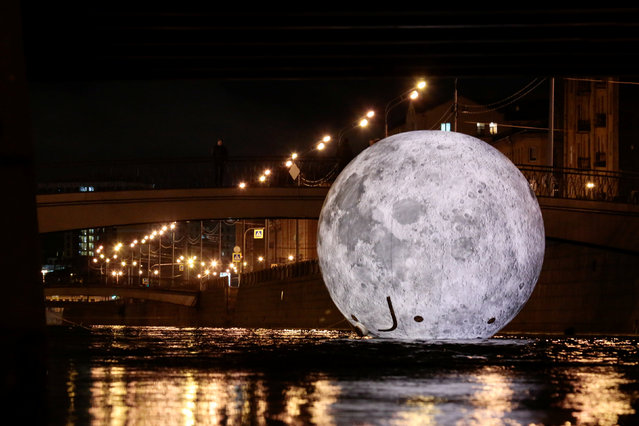 A giant ball decorated with images of the moon's surface, an installation for the “Festival of Lights”, is seen in the water of Obvodny channel in Saint Petersburg, Russia November 3, 2018. (Photo by Anton Vaganov/Reuters) 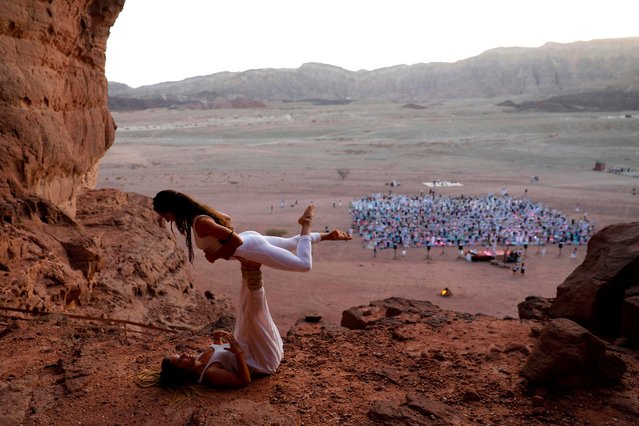