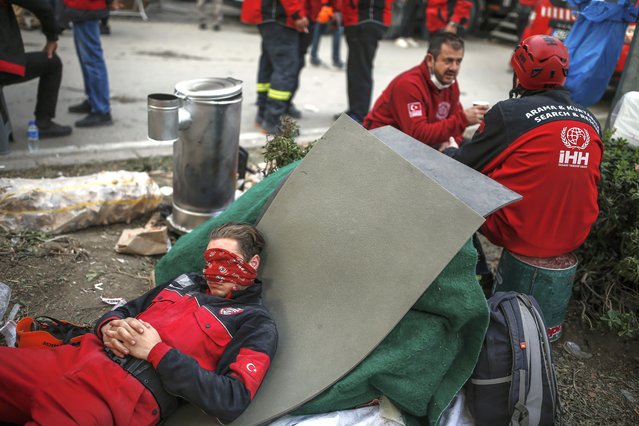 A member of rescue services takes a break during the search for survivors in the debris of a collapsed building destroyed in the earthquake in Izmir, Turkey, Tuesday, November 3, 2020. Rescuers in the Turkish coastal city pulled a young girl out alive from the rubble of a collapsed apartment building Tuesday, four days after a strong earthquake hit Turkey and Greece. (Photo by Emrah Gurel/AP Photo) 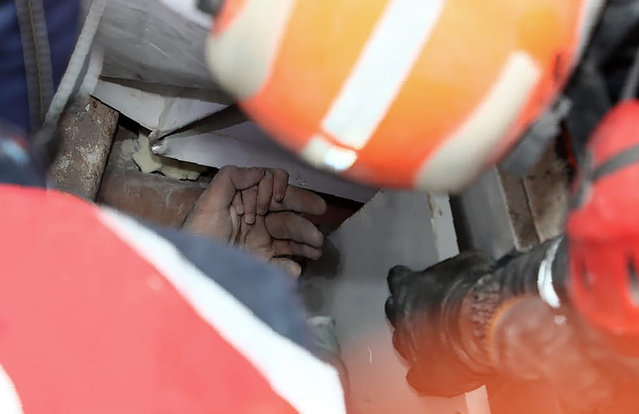 In this photo provided by the government's Disaster and Emergency Management Agency, a rescue worker holds Ayda Gezgin by the hand in the rubble of a collapsed apartment building in the Turkish coastal city of Izmir, Turkey, Tuesday, November 3, 2020, after they discovered the young girl alive, four days after a strong earthquake hit Turkey and Greece. The girl, Ayda Gezgin, was seen being taken into an ambulance on Tuesday, wrapped in a thermal blanket, amid the sound of cheers and applause from rescue workers. (Photo by AFAD via AP Photo) 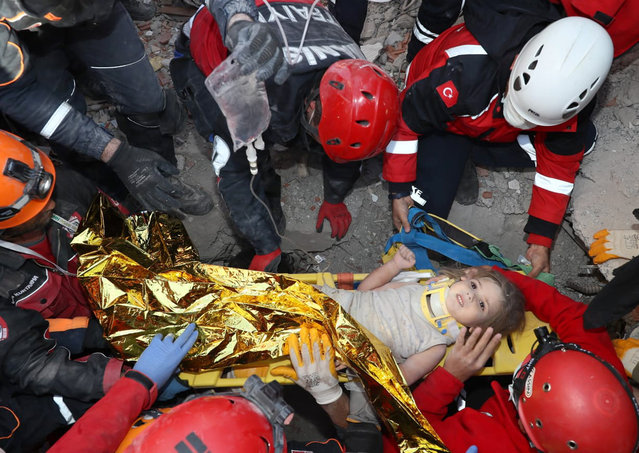 In this photo provided by the government's Search and Rescue agency AFAD, rescue workers, who were trying to reach survivors in the rubble of a collapsed building, surround Ayda Gezgin in the Turkish coastal city of Izmir, Turkey, Tuesday, November 3, 2020, after they have pulled the young girl out alive from the rubble of a collapsed apartment building four days after a strong earthquake hit Turkey and Greece. The girl, Ayda Gezgin, was seen being taken into an ambulance on Tuesday, wrapped in a thermal blanket, amid the sound of cheers and applause from rescue workers. (Photo by AFAD via AP Photo) 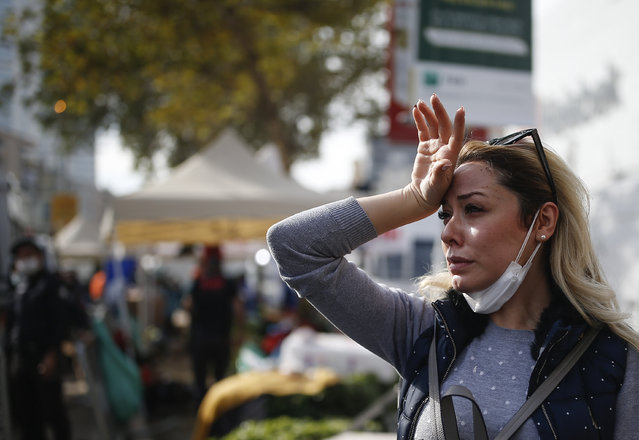 A woman pauses at a basketball court where tents had been set up to accommodate people after becoming homeless due to the Oct. 30 earthquake in Izmir, Turkey, Tuesday, November 3, 2020. (Photo by Emrah Gurel/AP Photo) 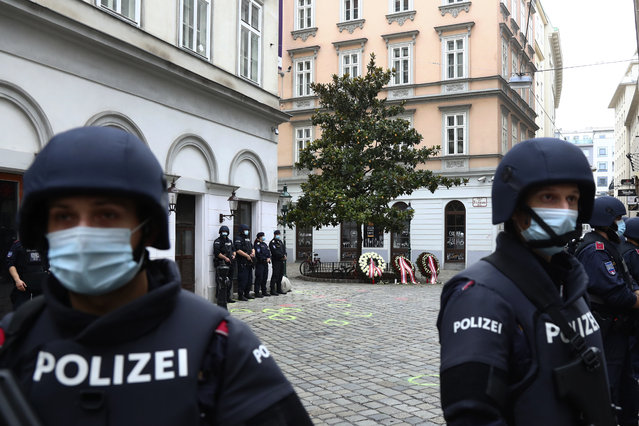 Police officers guard the scene in Vienna, Austria, Tuesday, November 3, 2020. Police in the Austrian capital said several shots were fired shortly after 8 p.m. local time on Monday, Nov. 2, in a lively street in the city center of Vienna. Austria's top security official said authorities believe there were several gunmen involved and that a police operation was still ongoing. (Photo by Matthias Schrader/AP Photo) 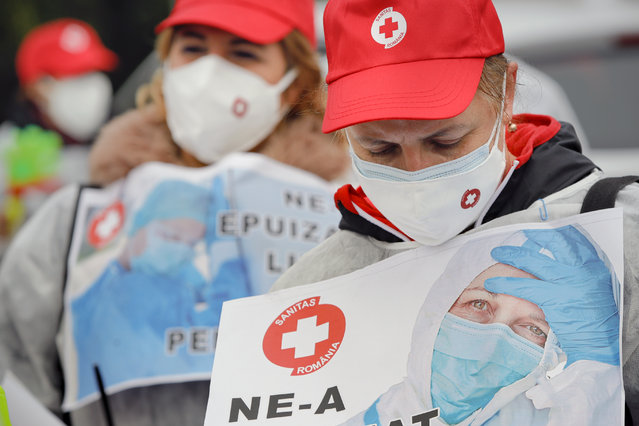 Medical workers, wearing masks for protection against the COVID-19 infection, protest outside the government headquarters demanding payment of the outstanding salaries and the opening of new positions in the national medical system to combat the current staff exhaustion, in Bucharest, Romania, Tuesday, November 3, 2020. Romania registered all time highs for new cases of COVID-19 infection on Tuesday. (Photo by Vadim Ghirda/AP Photo) 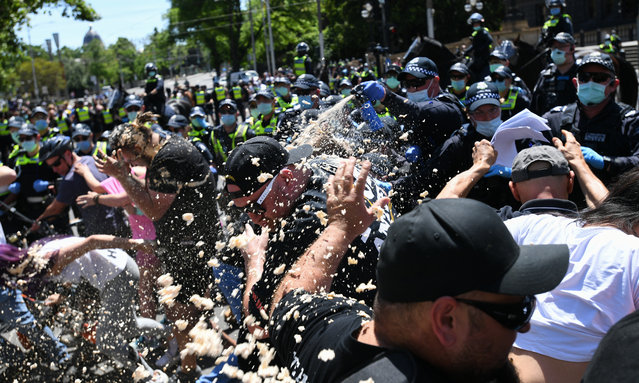 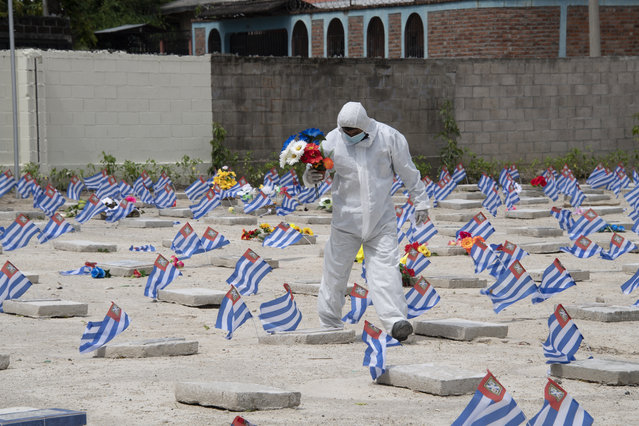 A municipal worker wearing a biosecurity suit carries flowers previously delivered by a relative of a victim of COVID-19, to be placed on his grave at La Bermeja cemetery during Day of the Dead in San Salvador on November 2, 2020. The municipality restricted access of relatives of victims of COVID-19 to place flowers on their graves. (Photo by Yuri Cortez/AFP Photo) 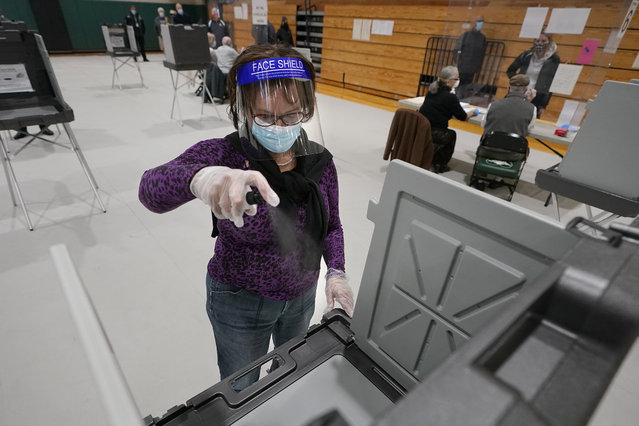 Poll worker Kathy Richardson uses a spray bottle to sanitize a voting booth out of concern for the coronavirus in a polling station at Marshfield High School, Tuesday, November 3, 2020, in Marshfield, Mass. (Photo by Steven Senne/AP Photo) 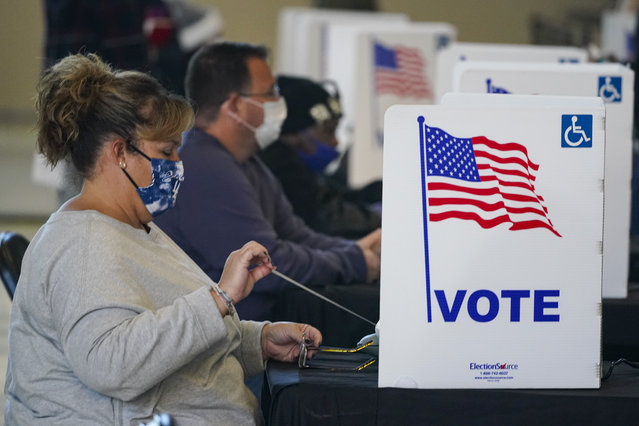 A voter begins to cast her ballot during voting at a poling place inside Bankers Life Fieldhouse in Indianapolis, on Election Day Tuesday, November 3, 2020. (Photo by Michael Conroy/AP Photo) 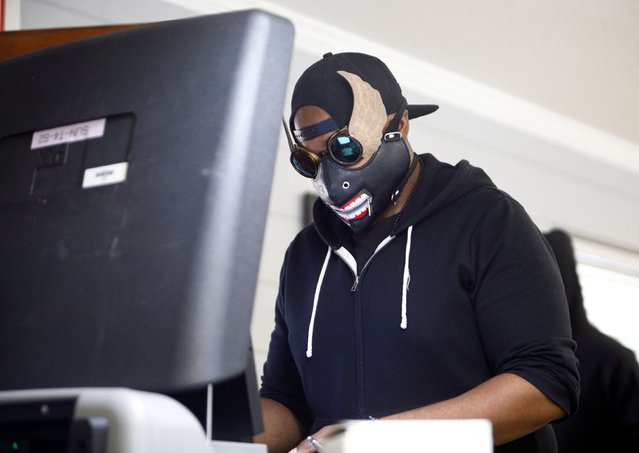 Donovan Faison wears an unusual mask and sunglasses as he feeds his ballot into a tabulator machine after voting at a polling station during the election in Durham, Durham County, North Carolina, U.S., November 3, 2020. (Photo by Jonathan Drake/Reuters) 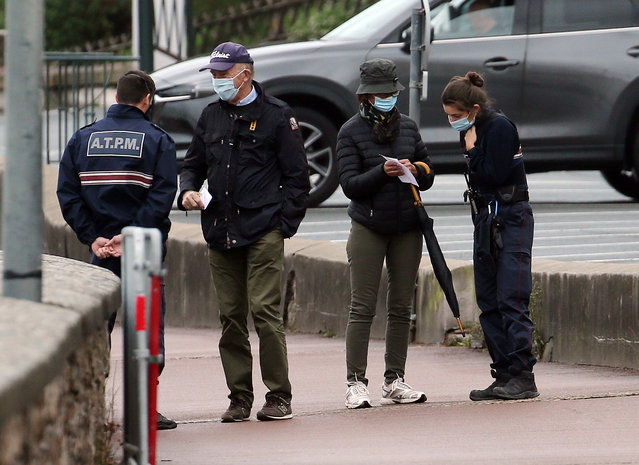 Police officers check documents to ensure that confinement measures due to the coronavirus are upheld in Saint Jean de Luz, southwestern France, Tuesday, November 3, 2020. French supermarkets are banned from selling flowers and books but they can still sell baby care products, according to a decree published Tuesday laying out new rules for what are considered “essential” items during a monthlong lockdown effort to slow virus infections and save lives. (Photo by Bob Edme/AP Photo) 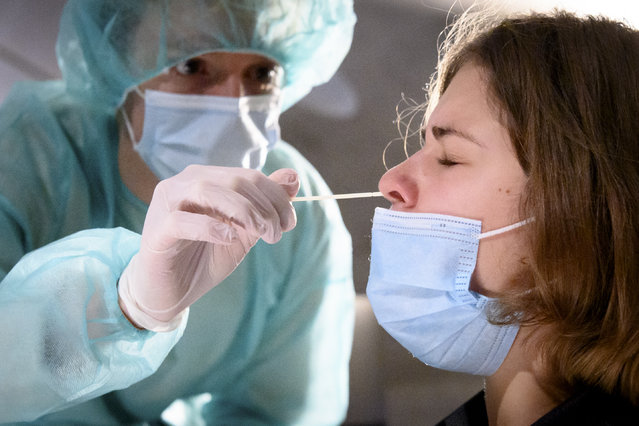 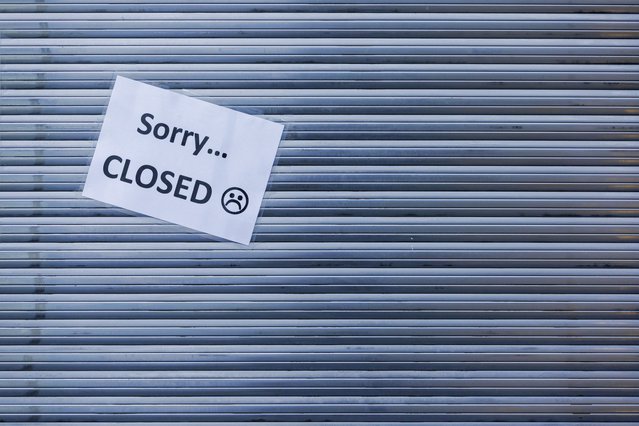 “Sorry Closed” is written on a piece of paper stuck to the lowered shutter of a closed snack bar in Muenster, Germany, Tuesday, November 3, 2020. A four-week partial lockdown has begun throughout Germany on 02.11.2020 to slow down the spread of the corona virus. (Photo by Rolf Vennenbernd/dpa via AP Photo) 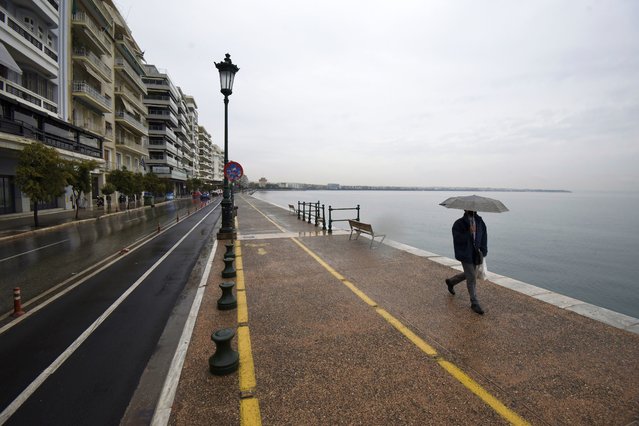 A pedestrian holds an umbrella as he walks on a coastal avenue during the lockdown to contain the spread of COVID-19 in the northern city of Thessaloniki, Greece, Tuesday, November 3, 2020. Greece's government imposed a localized lockdown on its second largest city of Thessaloniki and the northern province of Serres, after major increases in the number of coronavirus infections there. (Photo by Giannis Papanikos/AP Photo) 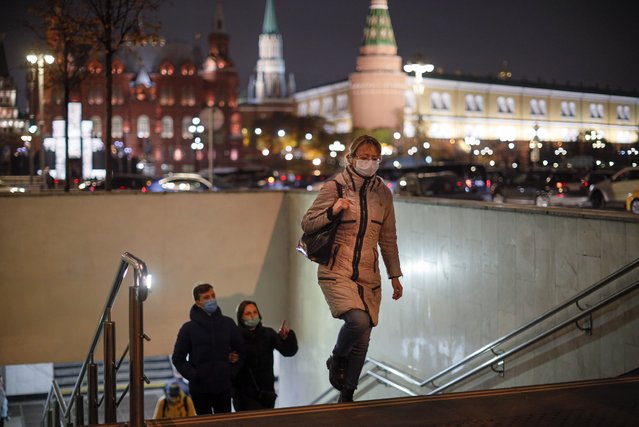 A woman wearing a face mask to help curb the spread of the coronavirus walks from the underpass under the street with the Historical Museum and the Kremlin are in the background in Moscow, Russia, Tuesday, November 3, 2020. Russia reported more than 18,000 daily coronavirus cases for a record five straight days. However, authorities have resisted a second lockdown or shutting down businesses despite reports about overwhelmed hospitals, drug shortages and inundated medical workers. (Photo by Alexander Zemlianichenko/AP Photo) 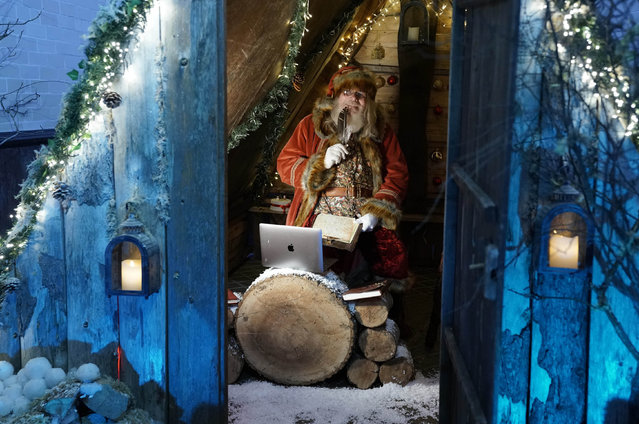 A man dressed as Father Christmas learns how to use Zoom on a laptop in the grotto at Bamburgh castle in Northumberland, UK on November 3, 2020, it was due to open on November the 21st but due to the new national lockdown he will now be speaking to the children via Zoom on a computer. (Photo by Owen Humphreys/PA Images via Getty Images)
Edit Del
05 Nov 2020 00:07:00, post received 0 comments
Publication archive:
←   →
Popular tags:
All tags
Last searches: