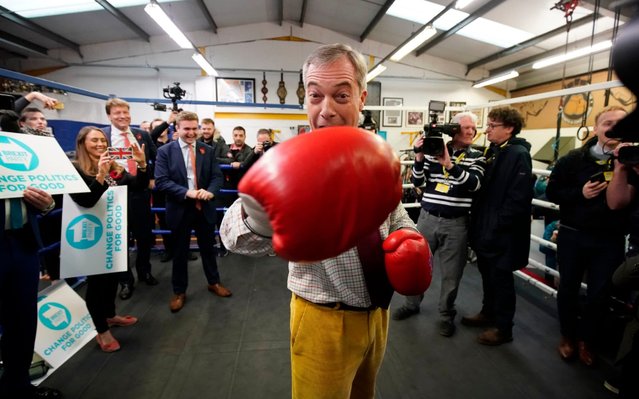 Brexit party leader Nigel Farage attends an election campaign event at Bolsover Boxing Club on November 5, 2019 in Bolsover, England. The UK’s main parties are gearing up for a December 12 general election after the motion was carried in a bid to break the current Parliamentary deadlock over Brexit. (Photo by Christopher Furlong/Getty Images) 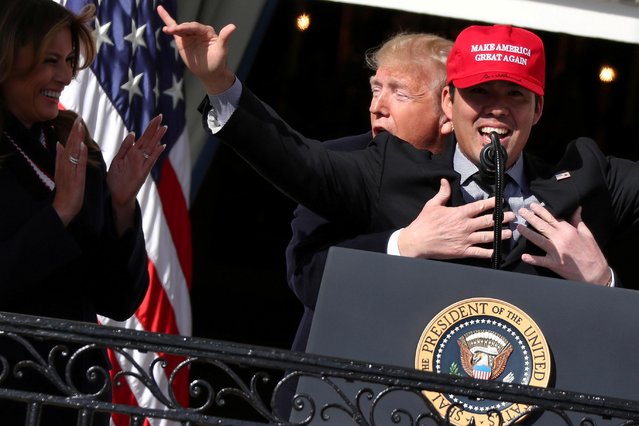 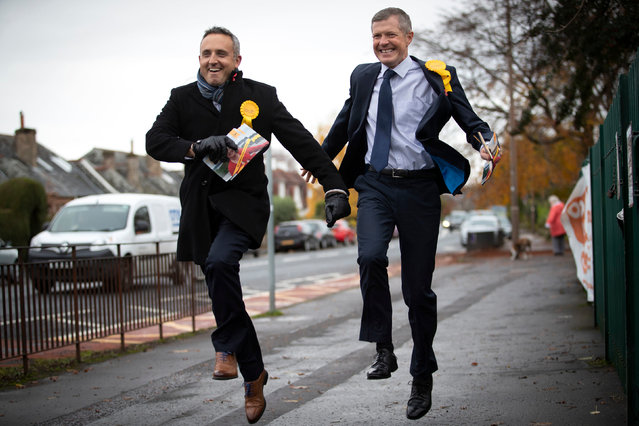 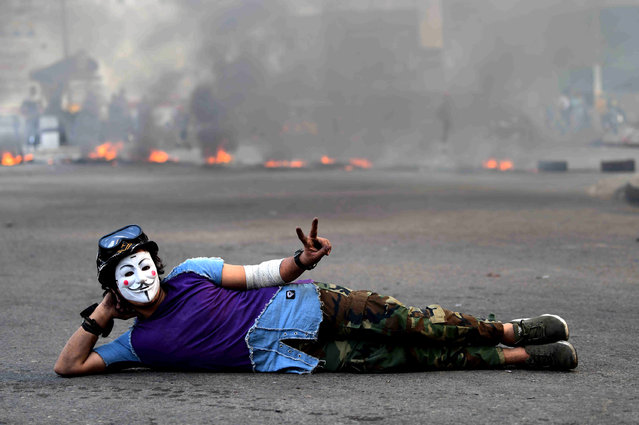 An Iraqi protester wearing a Guy Fawkes mask flashes victory signs in front a fire set by protesters to block a street during a protest and strike at Khillani square in central Baghdad, Iraq, 03 November 2019. Thousands of Iraqi teachers and university students participated in a strike and hundreds of protesters closed the roads in Baghdad as part of the wave of protests across the country, against the Iraqi government corruption, in response to the call of Iraqi Teachers Union and activists. (Photo by Murtaja Lateef/EPA/EFE) 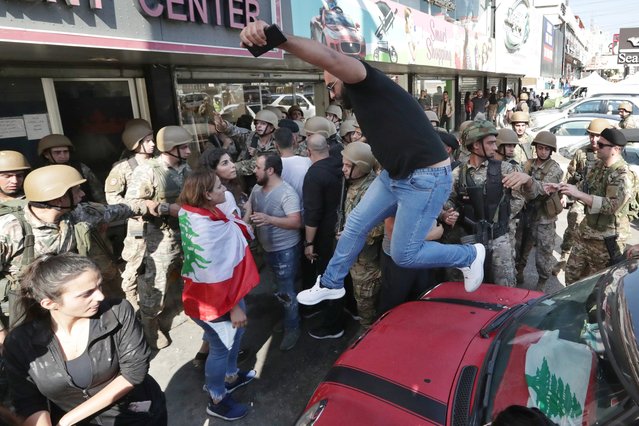 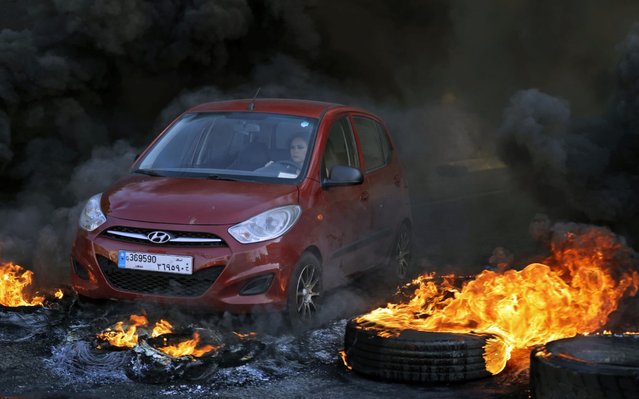 A woman drives through burning tires blocking a highway in Lebanon's northern port city of Byblos (Jbeil) during ongoing anti-government demonstrations on November 4, 2019. Demonstrators in Lebanon tried to block key roads Monday after a weekend of mass rallies confirmed that political promises had failed to extinguish the unprecedented protest movement. (Photo by Joseph Eid/AFP Photo) 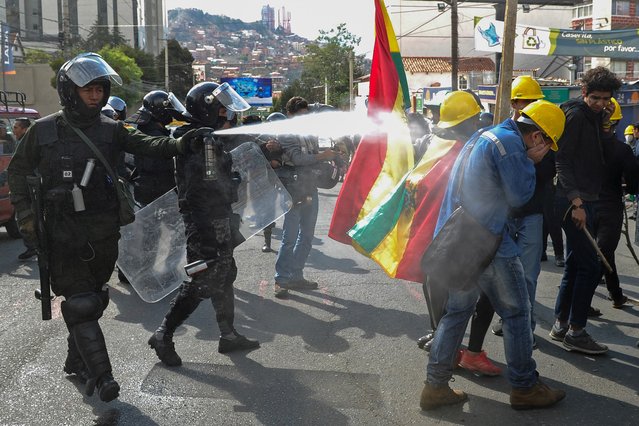 Riot police fire tear gas to disperse people taking part in a blockade to protest against the results of the October 20 elections in La Paz, on November 4, 2019. Bolivia's government accused its rivals Sunday of plotting deadly violence against it after an opposition figure vowed to oust leftist President Evo Morales and called for the military's support. Deadly unrest has gripped the South American country since Morales was named winner of the October 20 election for a fourth term. (Photo by Jorge Bernal/AFP Photo) 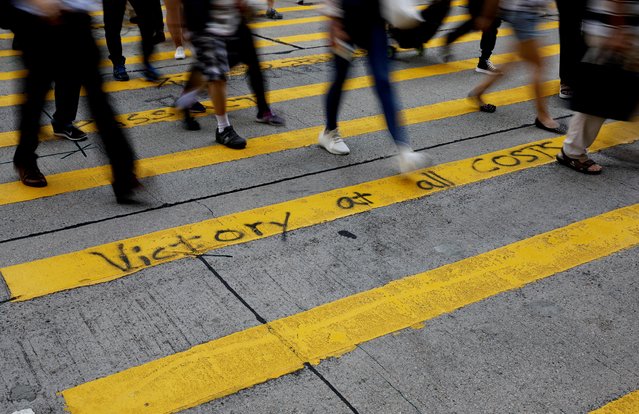 Pedestrians walk over graffiti on a crossing in Hong Kong, China, November 4, 2019. (Photo by Kim Kyung-Hoon/Reuters) 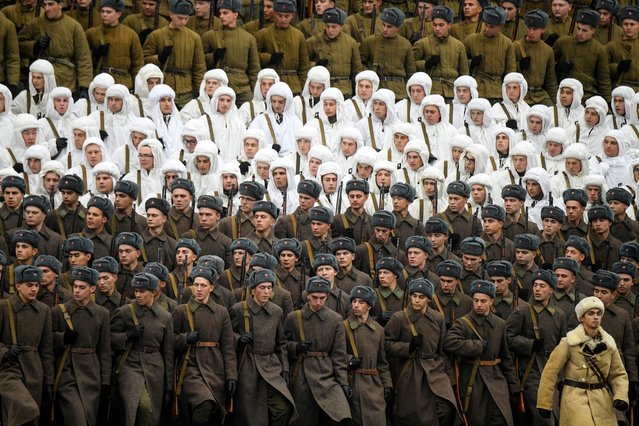 Russian servicemen dressed in historical uniforms rehearse for a forthcoming parade on Red Square in Moscow on November 5, 2019. The event will take place on November 7, marking the 78th anniversary of the 1941 parade, when Red Army soldiers marched past the Kremlin walls towards the front line to fight the Nazi Germany troops during World War Two. (Photo by Kirill Kudryavtsev/AFP Photo) 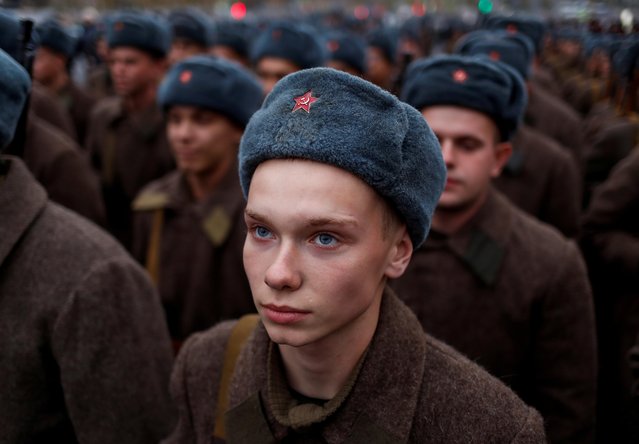 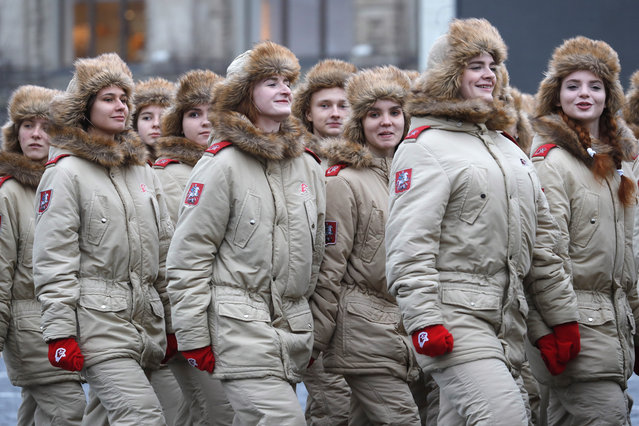 Members of the “Yunarmiya” youth military organization during a dress rehearsal of a march in Red Square in Moscow, Russia on November 5, 2019, marking the 78th anniversary of the 7 November 1941 October Revolution Parade. (Photo by Mikhail Japaridze/TASS) 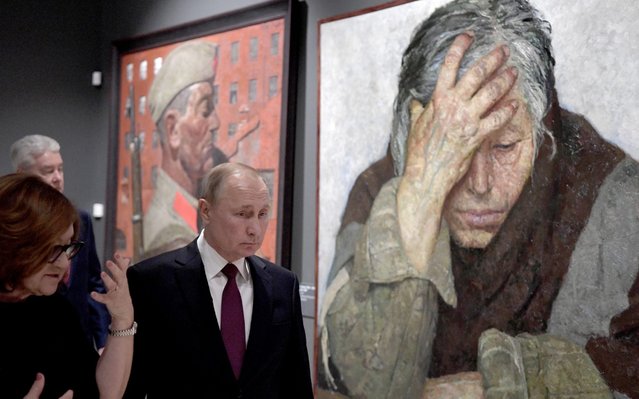 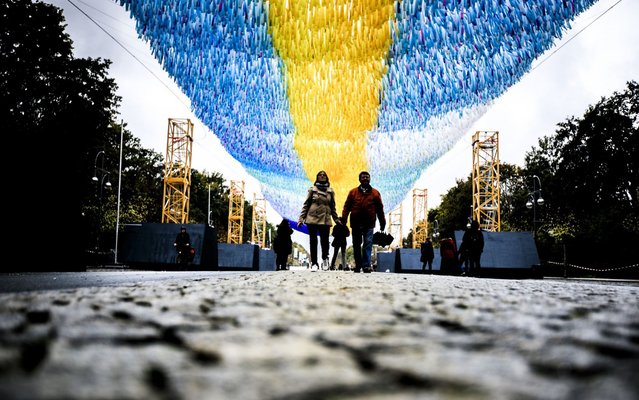 Visitors look at ribbons hanging in an installation by artist Patrick Shearn of the California-based artist group Poetic Kinetics on the first day of events celebrating the 30th anniversary of the fall of the Berlin Wall on November 4, 2019 in Berlin, Germany. November 9 will mark the 30th anniversary of the opening of the Berlin Wall that quickly led to the collapse of the communist East German government. Revolutions across other communist countries of the East Bloc soon followed. (Photo by Carsten Koall/Getty Images) 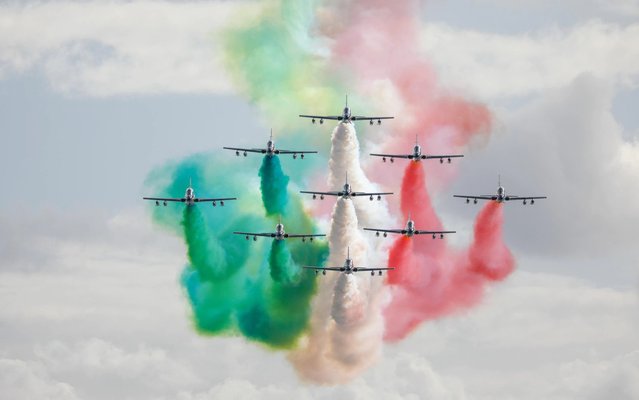 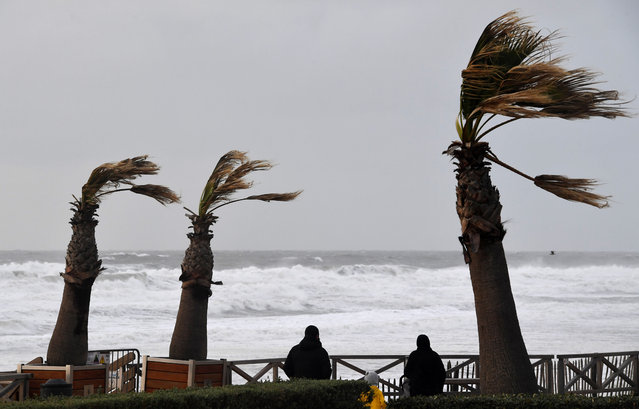 People walk on the waterfront of Lacanau, southwestern France, on November 3, 2019, after the storm Amelie. Some 100,000 households were deprived of electricity on the morning of November 3, 2019 in south western France, where the Atlantic coast was swept by storm Amelie, causing damage but no casualties, according to an initial assessment by the emergency services and the prefectures (Photo by Mehdi Fedouach/AFP Photo) 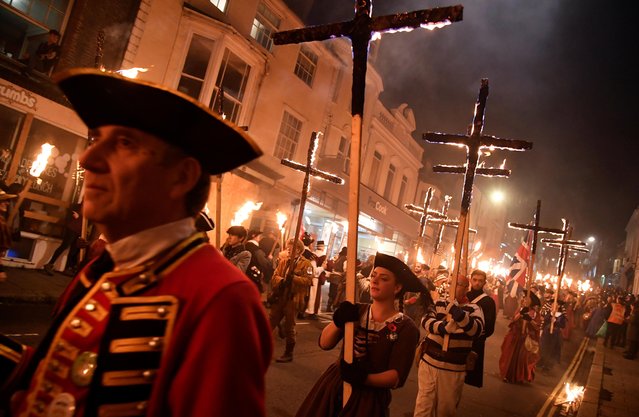 Participants parade through the town during the annual Bonfire Night festivities in Lewes, Britain, November 5, 2019. (Photo by Toby Melville/Reuters) 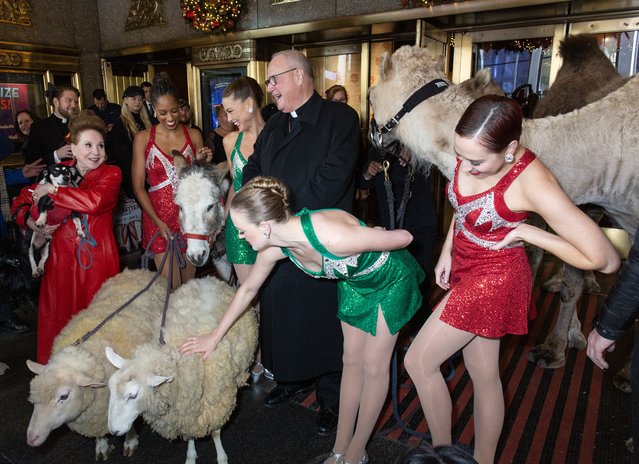 Cardinal Dolan and the Radio City Rockettes attend the blessing of the animals for their first day of rehearsal for their starring role in the 2019 Christmas Spectacular at Radio City Music Hall on November 04, 2019 in New York City. (Photo by Arturo Holmes/Getty Images) 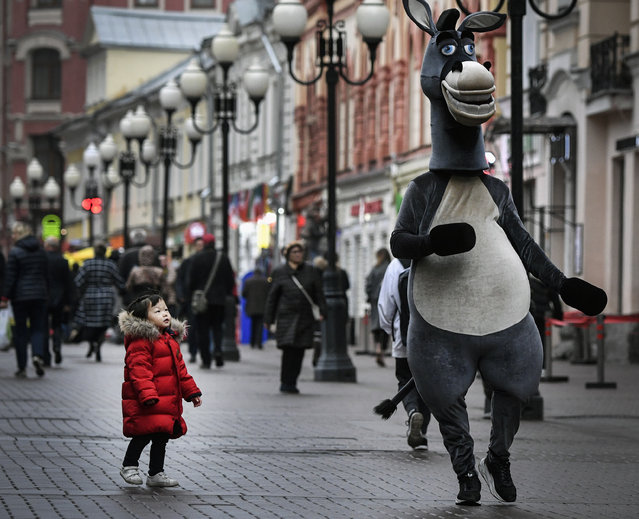 A young girl looks at an animator in downtown Moscow, Russia on November 5, 2019. (Photo by Alexander Nemenov/AFP Photo) 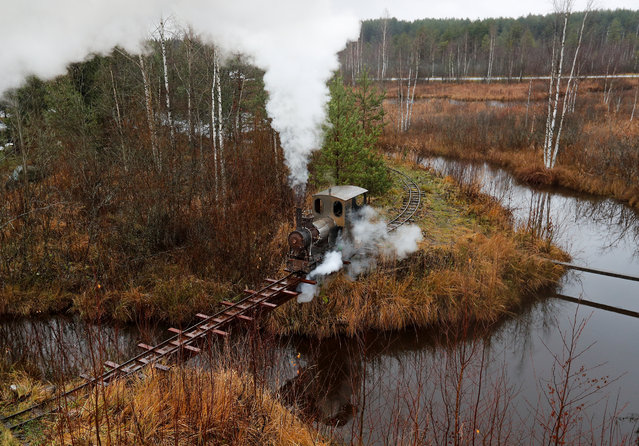