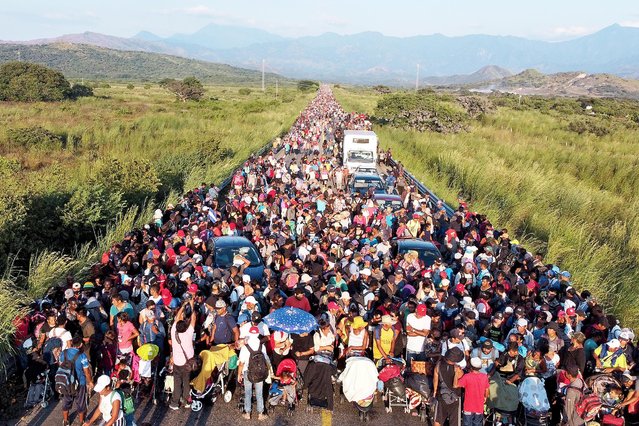 Migrants take part in a caravan heading to Mexico City, in Arriaga, Mexico November 6, 2021. Picture taken with a drone. (Photo by Raquel Cunha/Reuters) 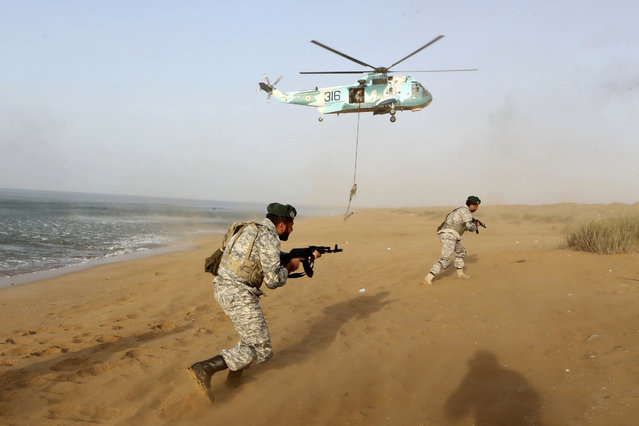 In this photo released by the official website of the Iranian Army on Sunday, November 7, 2021, troops attend a maneuver in a coastal area of southeastern Iran. On Sunday Iran's military began its annual war games near the Gulf of Oman, less than a month before upcoming nuclear talks with the West. (Photo by Iranian Army via AP Photo) 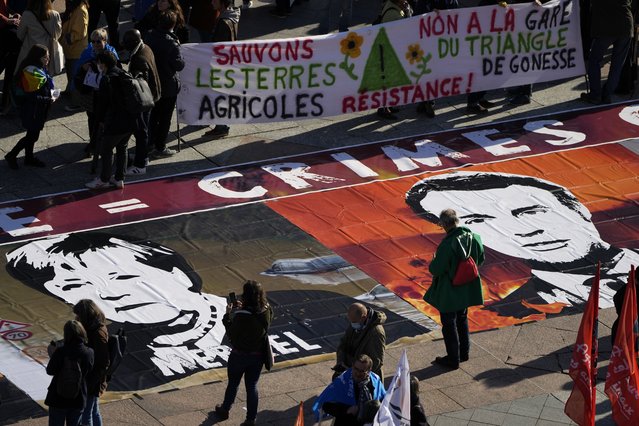 Portraits of world leaders, including portraits German Chancellor Angela Merkel, left, and French President Emmanuel Macron lay on the ground during a protest organized by green coalitions for the “Global Day for Climate” in front of Paris city Hall in Paris, France, Saturday, November 6, 2021. The protest is taking place as leaders and activists from around the world were gathering in Glasgow, Scotland for the U.N. climate summit, to lay out their vision for addressing the common challenge of global warming. (Photo by Francois Mori/AP Photo) 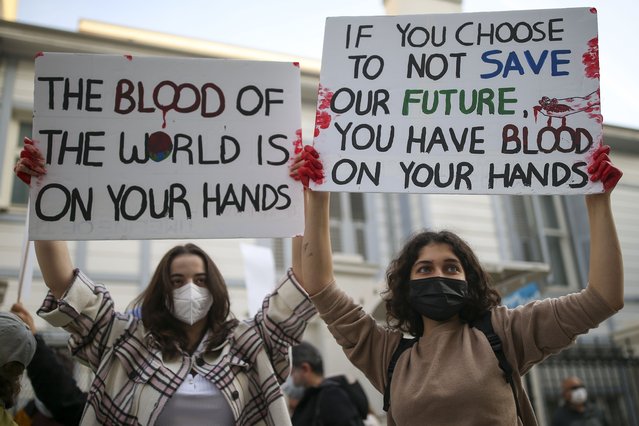 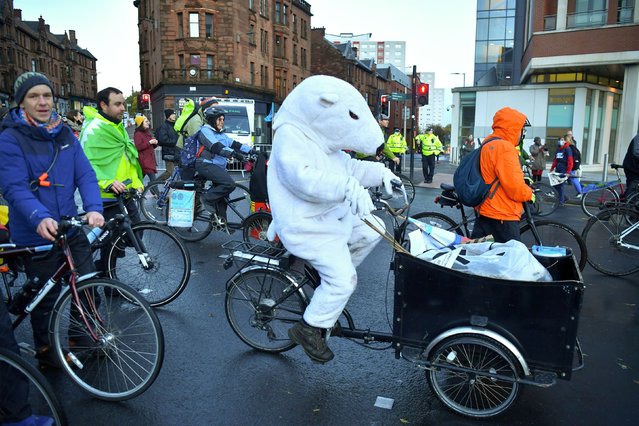 A demonstrator wearing a polar bear costume rides a bike during a protest, as the UN Climate Change Conference (COP26) takes place, in London, Britain, November 6, 2021. (Photo by Henry Nicholls/Reuters) 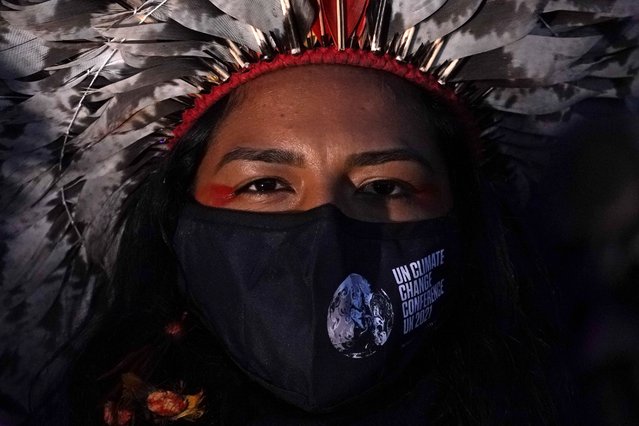 An Indigenous climate activist attends a rally at the end of a protest organized by the Cop26 Coalition in Glasgow, Scotland, Saturday, November 6, 2021 which is the host city of the COP26 U.N. Climate Summit. (Photo by Alberto Pezzali/AP Photo) 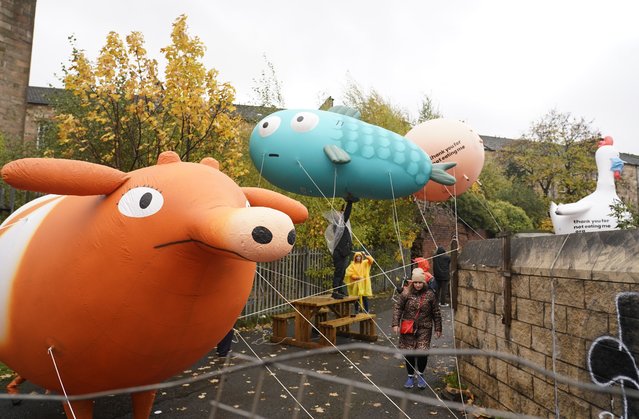 A woman walks past inflatables that will be used by climate activists during a protest organized by the Cop26 Coalition in Glasgow, Scotland, Saturday, November 6, 2021 which is the host city of the COP26 U.N. Climate Summit. (Photo by Alberto Pezzali/AP Photo) 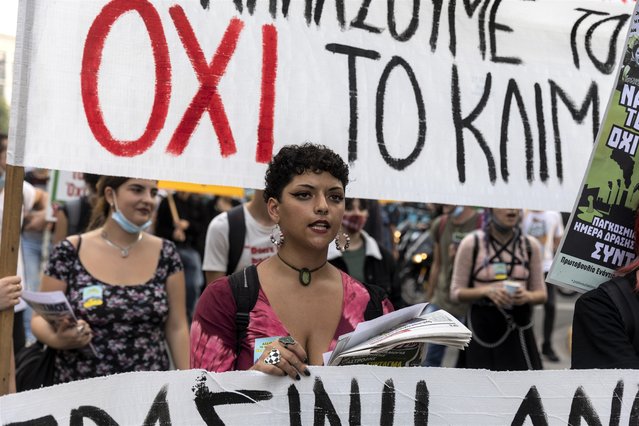 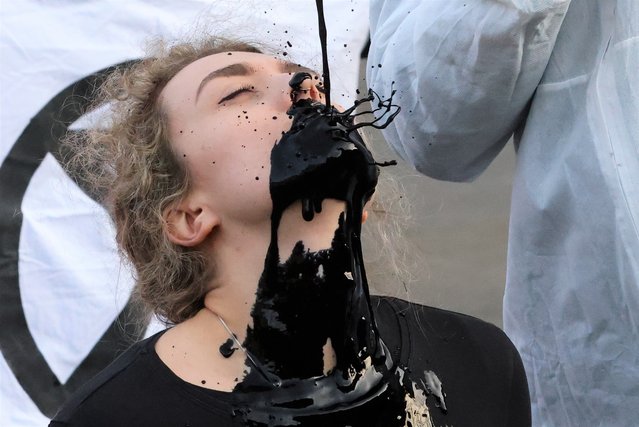 A man pours fake fuel on the face of a protester as they perform at a demonstration against the fossil fuel industry during the UN Climate Change Conference (COP26), in Glasgow, Scotland, Britain, November 7, 2021. (Photo by Yves Herman/Reuters) 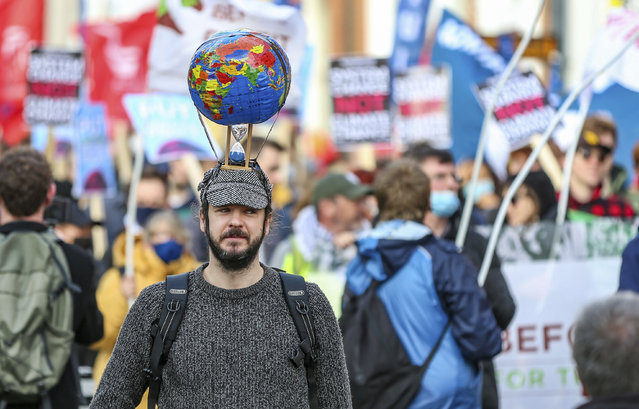 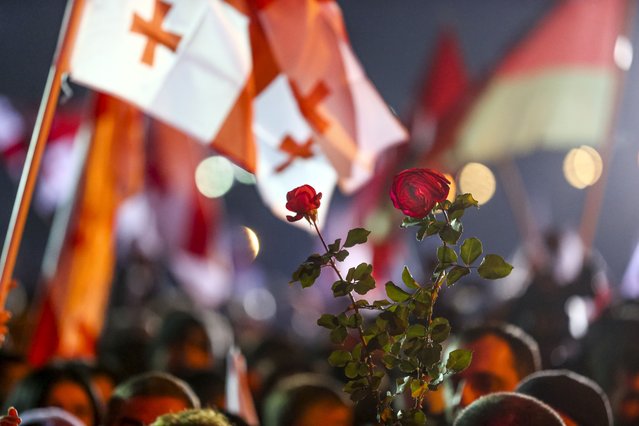 Georgian opposition supporters of former president Mikheil Saakashvili hold national flags a roses as a symbol of a revolution during a rally in front of the prison where the former president is being held, in Rustavi, about 20 km from the capital Tbilisi, Georgia, Saturday, November 6, 2021. Saakashvili was detained in Tbilisi on Saturday, Oct. 1, 2021. Doctors say former President Mikheil Saakashvili is very weak as he nears 40 days on hunger strike. He started the hunger strike after being arrested at the beginning of October when he returned to Georgia. Saakashvili, who left Georgia in 2014 and became a Ukrainian citizen, faces several charges in Georgia and earlier was sentenced in absentia to up to six years in prison. (Photo by Zurab Tsertsvadze/AP Photo) 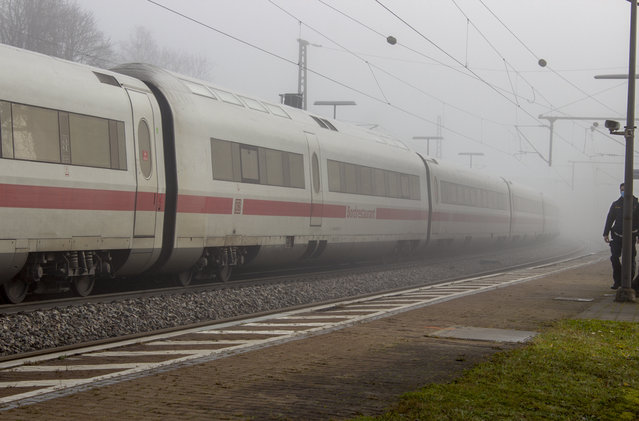 An ICE train stands at the station in Seubersdorf, southern Germany, Saturday, November 6, 2021. There has been a knife attack in the ICE between Regensburg and Nuremberg. Several people were injured, according to police. A man was arrested. (Photo by Vifogra/dpa via AP Photo) 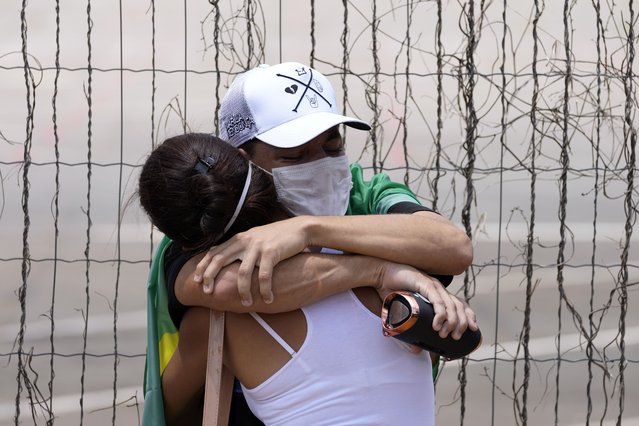 Two people hug each other as fans wait in line for access to the wake of Brazilian singer Marilia Mendonca, in front of the Ginasio Arena in the city of Goiania, Brazil, Saturday, November 6, 2021. One of Brazil's most popular singers and a Latin Grammy winner, Mendonca died on Friday, November 5, 2021, in an airplane crash on her way to a concert in the southeastern Brazilian of state Minas Gerais. Mendonça was 26 and performed country music in Brazil called sertanejo. (Photo by Eraldo Peres/AP Photo) 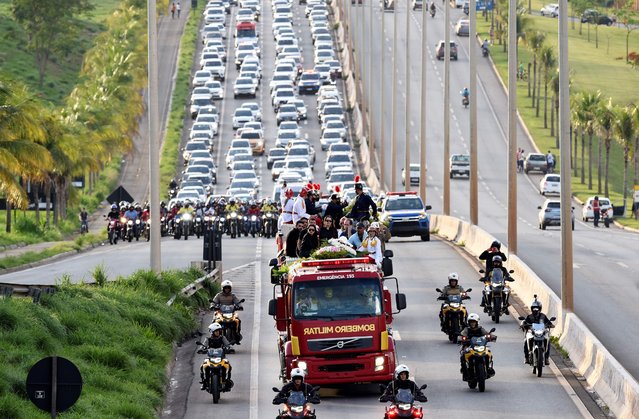 A military firefighter brigade truck carrying the remains of Brazilian singer Marilia Mendonca leads the funeral cortege to the Cementerio Parque Memorial, in Goiania, state of Goias, Brazil, on November 6, 2021. Marilia Mendonca, 26, one of the most popular of the “sertanejo” genre in Brazil and a Latin Grammy winner, died on the eve along with four other people in an airplane crash on her way to a concert, in the state of Minas Gerais. (Photo by Evaristo Sa/AFP Photo) 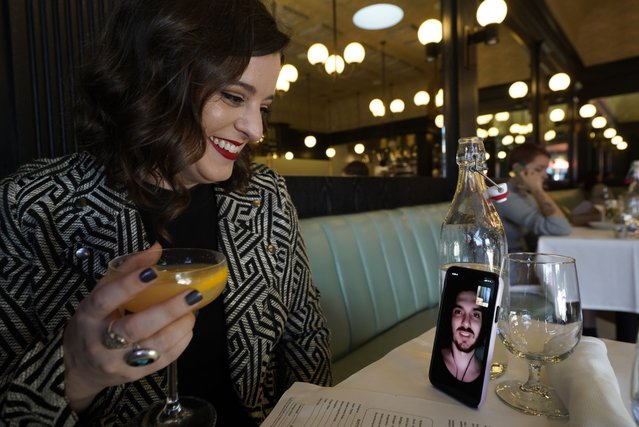 Erin Tridle holds a video chat with her boyfriend Jordan Commarrieu living in Paris from their favorite French restaurant “Petit Trois” in Los Angeles on Friday, November 5, 2021. Travel restrictions that have separated couples and relatives living in different countries are about to end. New rules go into effect Monday, Nov. 8 that allow air travel from previously restricted countries as long as the traveler has proof of vaccination and a negative COVID-19 test. (Photo by Damian Dovarganes/AP Photo) 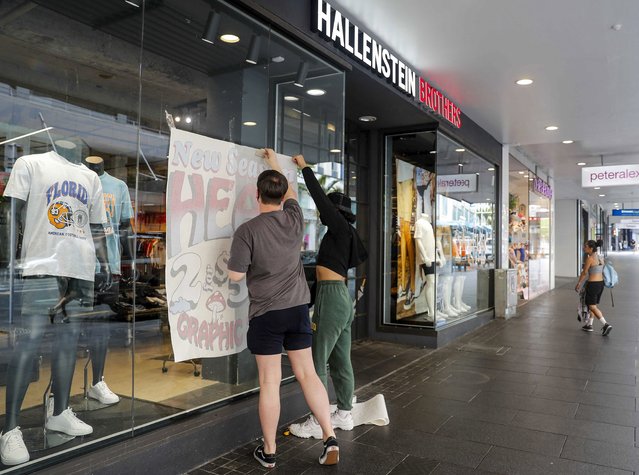 Staff prepare a store for reopening in central Auckland, New Zealand, Monday, November 8, 2021. The lockdown of New Zealand's largest city Auckland, for almost three months after an outbreak of the delta variant, is likely to end later this month, with some coronavirus restrictions being eased Tuesday, Nov. 9. (Photo by Dean Purcell/NZ Herald via AP Photo) 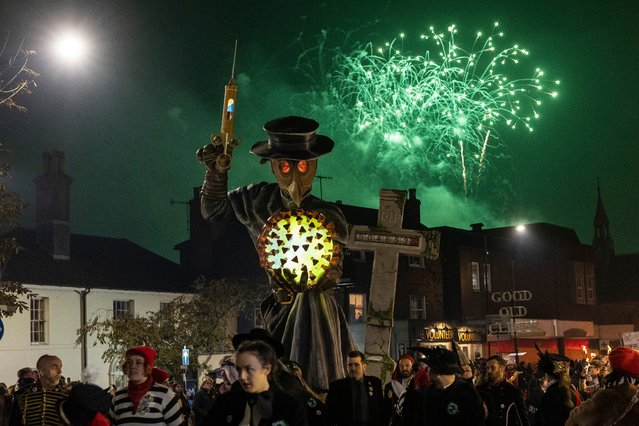 People walk in front of an effigy holding a hypodermic needle, a Covid-19 virus cell and a tombstone as they take part in the parade at the annual Lewes Bonfire Night Celebrations on November 5, 2021 in Lewes, England. The event commemorates the memory of the seventeen Protestant martyrs as Bonfire Societies parade through the narrow streets. The evening comes to an end with the burning of effigies, or “guys” usually representing Guy Fawkes, who died in 1605 after an unsuccessful attempt to blow up The Houses of Parliament, and other topical figures. The annual parade was cancelled last year due to the Covid-19 pandemic. (Photo by Dan Kitwood/Getty Images) 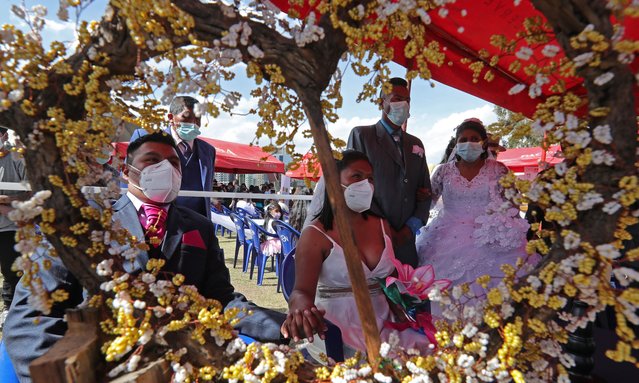 A couple gets married during a collective wedding by the Civil Registry Service (Sereci), in the Luis Lastra municipal court in ​La Paz, Bolivia, 06 November 2021. (Photo by Martin Alipaz/EPA/EFE) 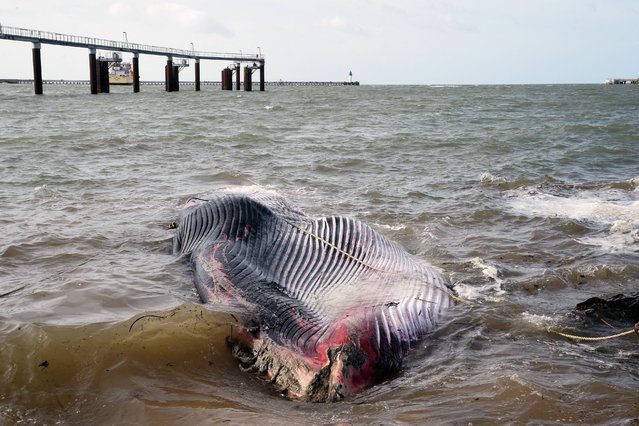 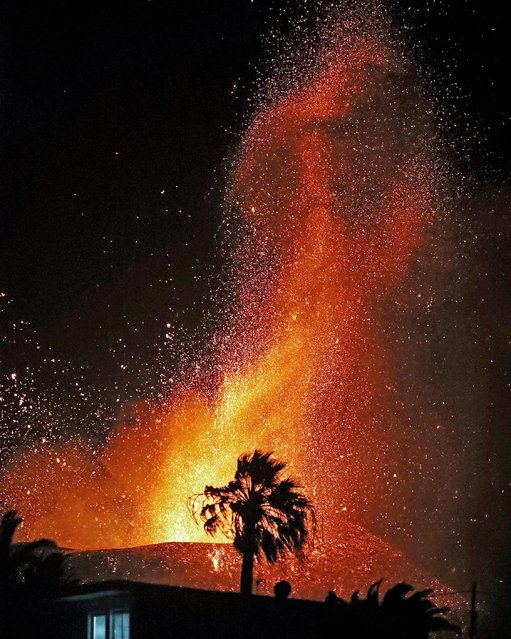 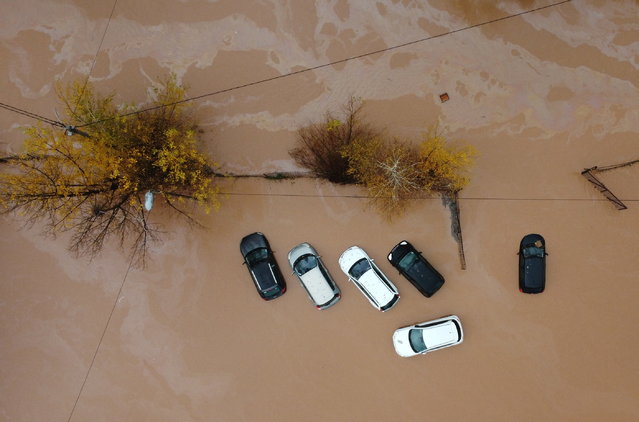