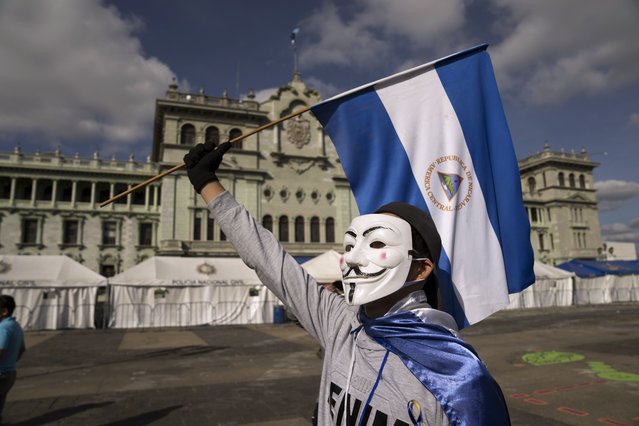 A Nicaraguan citizen protests against President Daniel Ortega at the Constitution Square in Guatemala City, Sunday, November 7, 2021. Ortega seeks a fourth consecutive term against a field of little-known candidates while those who could have given him a real challenge sit in jail. (Photo by Moises Castillo/AP Photo) 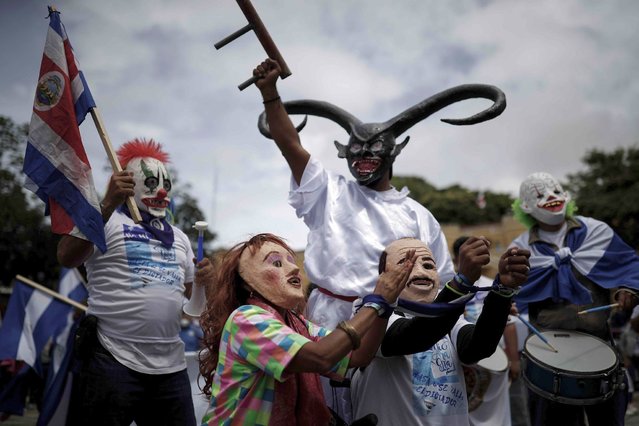 Two people with masks that represent the President of Nicaragua, Daniel Ortega and his wife, Vice President Rosario Murillo in handcuffs, during a protest through the main streets of San Jose against the presidential elections in their country of Nicaragua, in San Jose, Costa Rica, 07 November 2021. The protestors are against what they believe to be “fraud” and the electoral “circus” orchestrated by the President of Nicaragua Daniel Ortega. Several Nicaraguan opposition groups united around the world to repudiate the elections that were held in their country. (Photo by Jeffrey Arguedas/EPA/EFE) 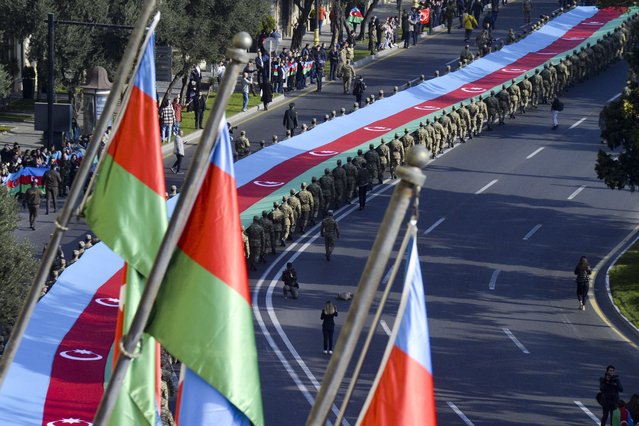 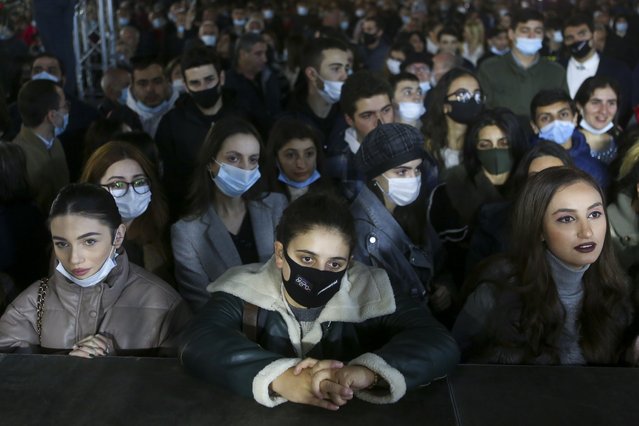 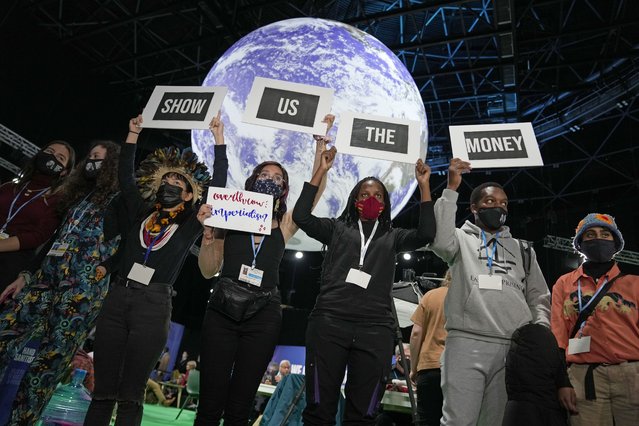 Climate activist Vanessa Nakate, third right, and other activists engage in a “Show US The Money” protest at the COP26 U.N. Climate Summit in Glasgow, Scotland, Monday, November 8, 2021. The U.N. climate summit in Glasgow gathers leaders from around the world, in Scotland's biggest city, to lay out their vision for addressing the common challenge of global warming. (Photo by Alastair Grant/AP Photo) 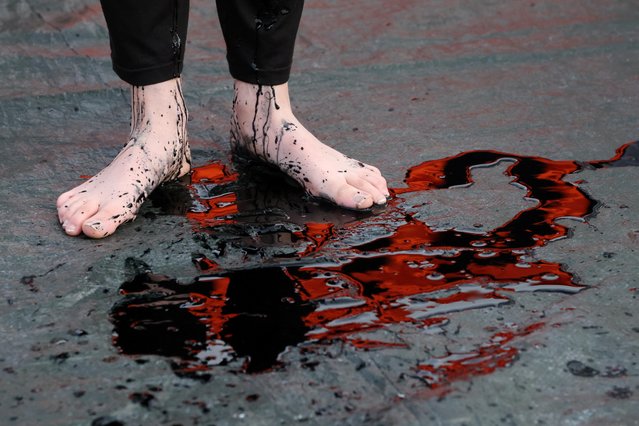 A fake fuel is seen on the ground next to a protester who attends a demonstration against the fossil fuel industry during the UN Climate Change Conference (COP26), in Glasgow, Scotland, Britain, November 7, 2021. (Photo by Yves Herman/Reuters) 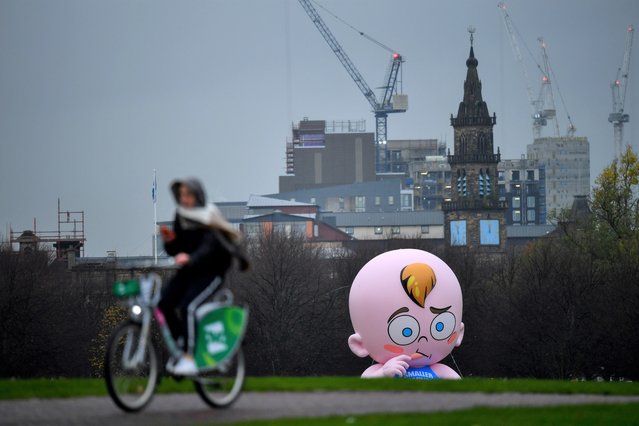 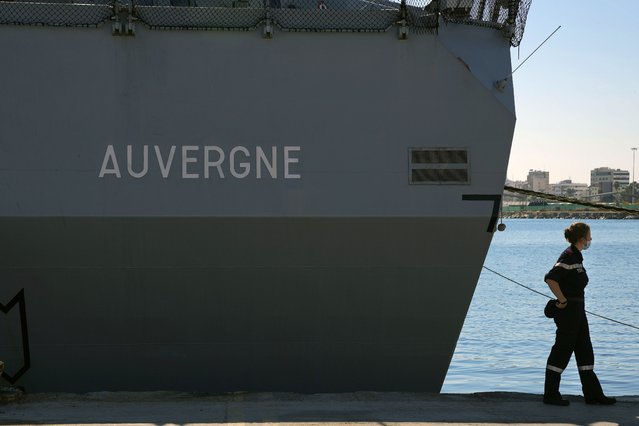 A sailor walks by the French frigate Auvergne during a port call at Cyprus' port of Larnaca on Monday, November 8, 2021. The frigate's presence signals the French government's military muscle flexing as it tries to fill in a perceived regional power vacuum and to protect its interests including offshore hydrocarbon drilling rights that Cyprus granted to French energy company Total. (Photo by Petros Karadjias/AP Photo) 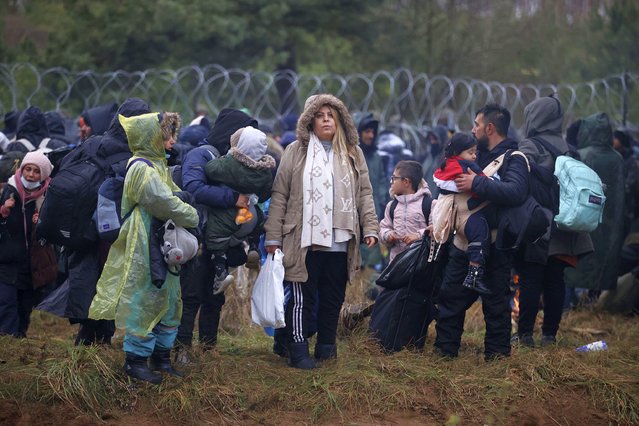 Migrants from the Middle East and elsewhere gather at the Belarus-Poland border near Grodno, Belarus, Monday, November 8, 2021. Poland increased security at its border with Belarus, on the European Union's eastern border, after a large group of migrants in Belarus appeared to be congregating at a crossing point, officials said Monday. The development appeared to signal an escalation of a crisis that has being going on for months in which the autocratic regime of Belarus has encouraged migrants from the Middle East and elsewhere to illegally enter the European Union, at first through Lithuania and Latvia and now primarily through Poland. (Photo by Leonid Shcheglov/BelTA via AP Photo) 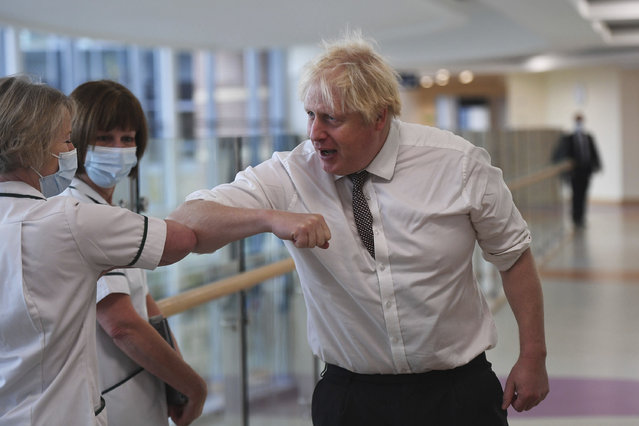 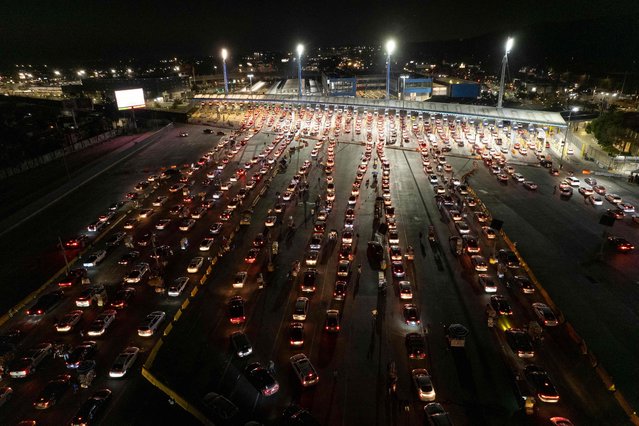 Aerial view of cars lining-up to cross the border at San Ysidro crossing port on the Mexico-United States border in Tijuana, Baja California state, Mexico, on November 7, 2021. On Monday 8, Washington will reopen its land borders with Mexico and Canada to foreigners vaccinated against Covid-19, almost 20 months after they were closed to non-essential traffic. (Photo by Guillermo Arias/AFP Photo) 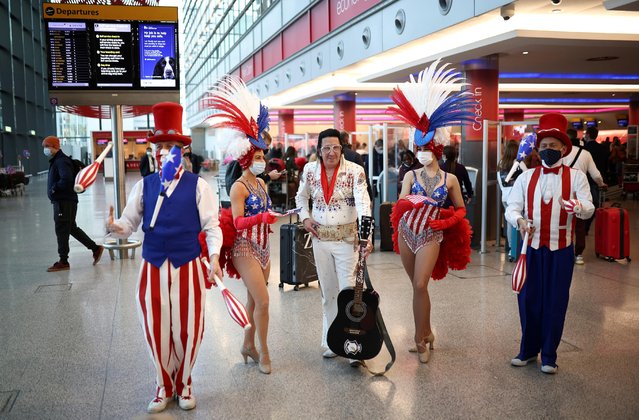 Performers engage with travellers as they queue to check into Virgin Atlantic and Delta Air Lines flights at Heathrow Airport Terminal 3, following the lifting of restrictions on the entry of non-U.S. citizens to the United States imposed to curb the spread of the coronavirus disease (COVID-19), in London, Britain, November 8, 2021. (Photo by Henry Nicholls/Reuters) 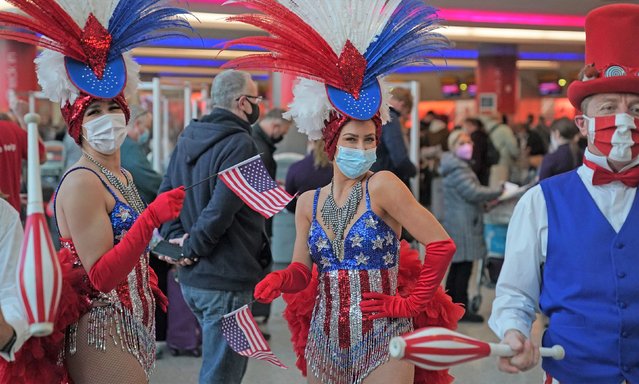 Performers entertain passengers at London Heathrow Airport's T3 on Monday, November 8, 2021, as the US reopens its borders to UK visitors in a significant boost to the travel sector. Thousands of travellers are jetting off on transatlantic flights for long-awaited reunions with family and friends. (Photo by Steve Parsons/PA Images via Getty Images) 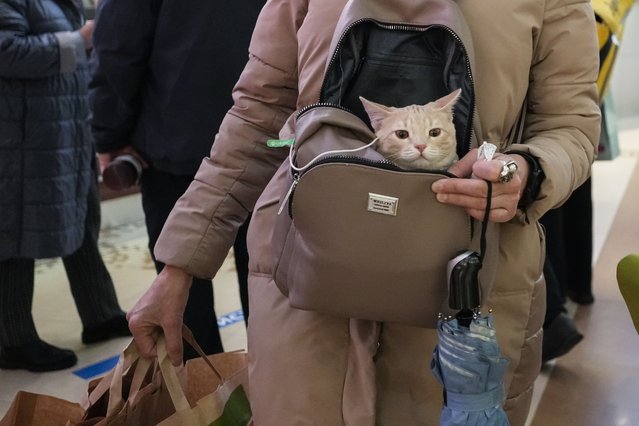 A woman carries a cat in her bag as she goes shopping in a store in Moscow, Russia, Monday, November 8, 2021. Russian capital had return to work on Monday after nonworking days due to coronavirus. Certain restrictions will remain in place, such as a stay-at-home order for older adults and a mandate for businesses to have 30% of their staff work from home. Access to theatres and museums is limited to those who either have been fully vaccinated, have recovered from COVID-19 within the last six months or can present a negative coronavirus test. (Photo by Pavel Golovkin/AP Photo) 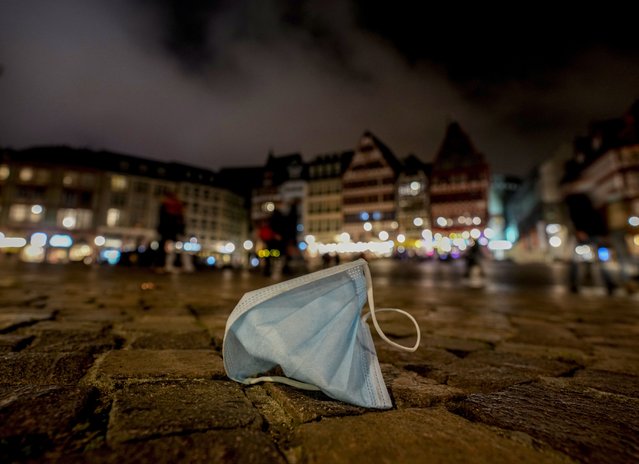 A face mask was left back on the Roemerberg square in Frankfurt, Saturday, November 6, 2021. (Photo by Michael Probst/AP Photo) 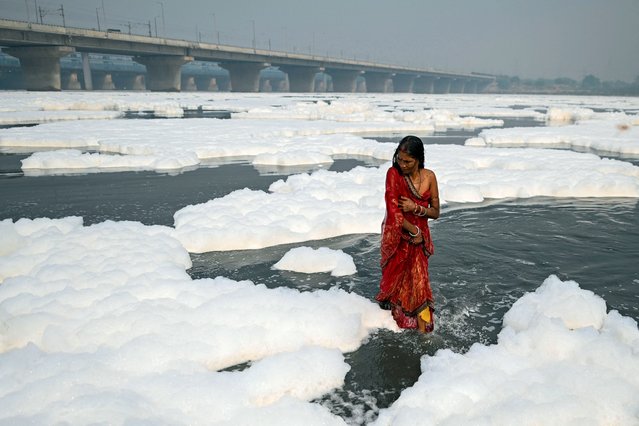 A devotee takes a dip in the waters of Yamuna river as a part of rituals for the upcoming Hindu festival of Chhat puja amid foam created by pollution in the water in New Delhi on November 8, 2021. (Photo by Sajjad Hussain/AFP Photo) 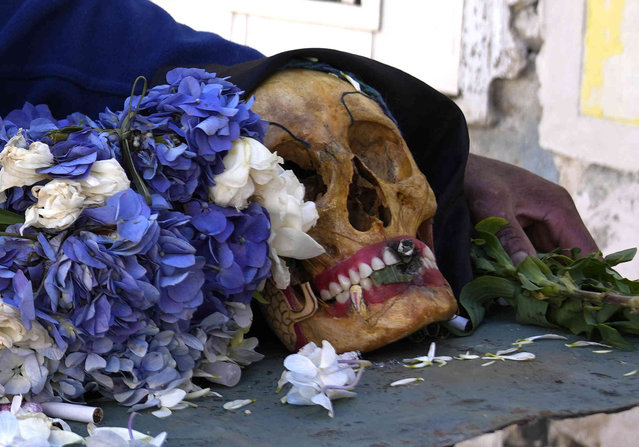 A woman carries a decorated human skull before praying at the General Cemetery during the annual “Natitas” festival, a local tradition marking the end of the Catholic All Saints holiday in La Paz, Bolivia, Monday, November 8, 2021. The “Natitas”, which means “without a nose” in the Indigenous Aymara language, are cared for and decorated by faithful who use them as amulets for protection.. (Photo by Juan Karita/AP Photo) 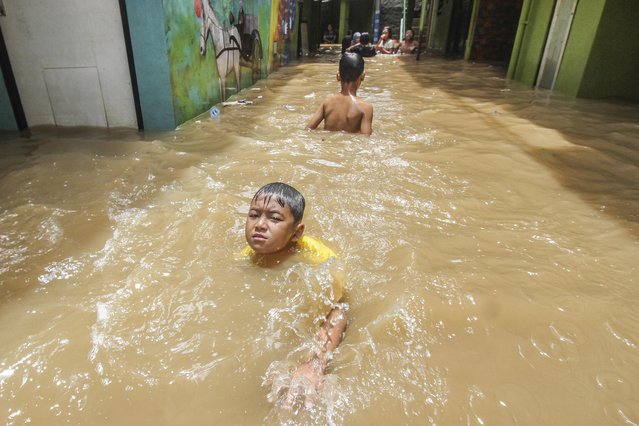 Children play on water after flood hit their home at Kebon Pala area, Jakarta, Indonesia on November 8, 2021. The high intensity of rainfall has resulted in a number of settlements on the Ciliwung river area being submerged by floods as high as 1.5 to 2 meters. (Photo by Eko Siswono Toyudho/Anadolu Agency via Getty Images) 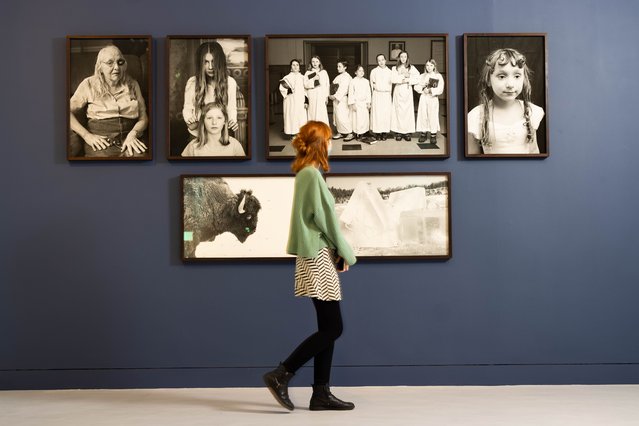 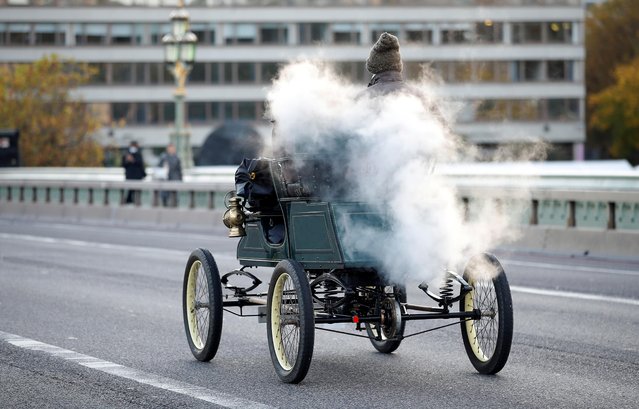 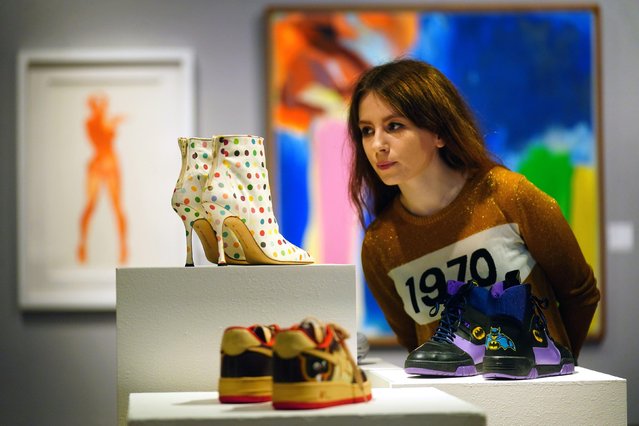