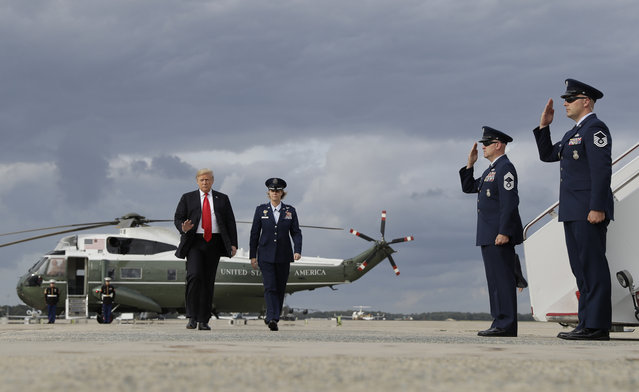 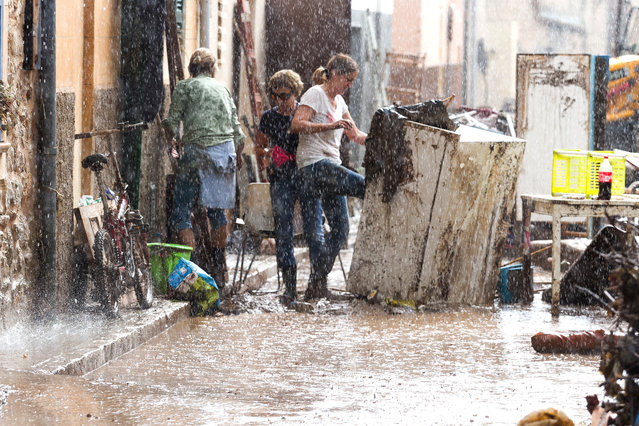 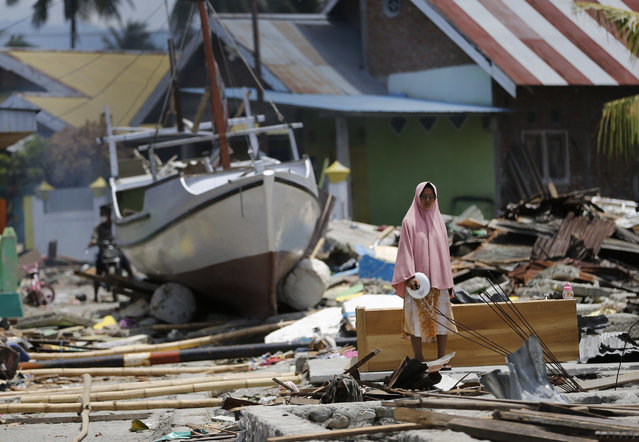 A woman stands in the rubble of houses as a boat swept ashore by tsunami rests on the ground in the background in Wani village on the outskirt of Palu, Central Sulawesi, Indonesia, Wednesday, October 10, 2018. A 7.5 magnitude earthquake rocked Central Sulawesi province on Sept. 28, triggering a tsunami and mudslides that killed a large number of people and displaced tens of thousands of others. (Photo by Dita Alangkara/AP Photo) 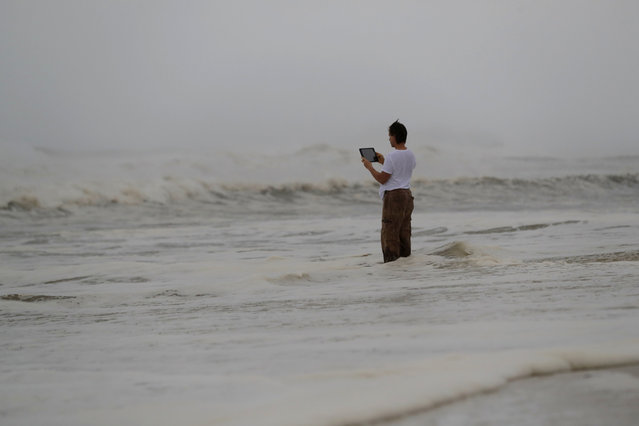 Peter Malave records the surf from encroaching Hurricane Michael, which is expected to make landfall today, in Panama City Beach, Fla., Wednesday, October 10, 2018. The hurricane center says Michael will be the first Category 4 hurricane to make landfall on the Florida Panhandle. (Photo by Gerald Herbert/AP Photo) 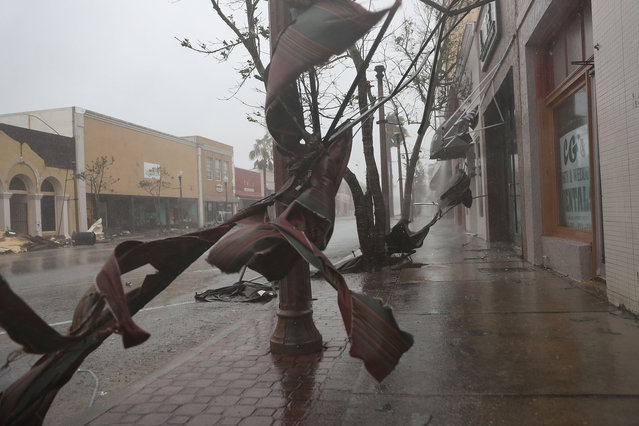 Broken awnings are seen after hurricane Michael passed through the downtown area on October 10, 2018 in Panama City, Florida. The hurricane hit the Florida Panhandle as a category 4 storm. (Photo by Joe Raedle/Getty Images) 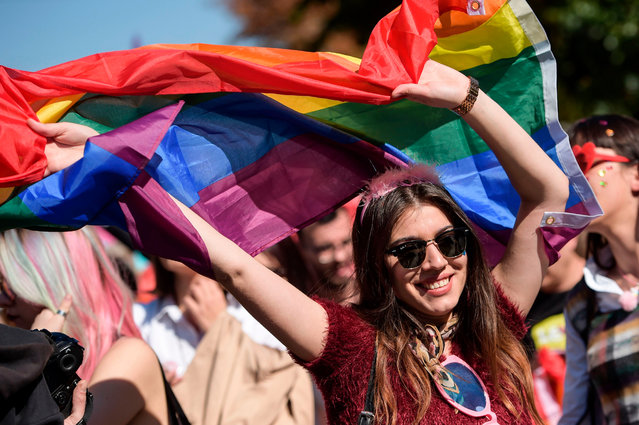 Kosovo citizens march with rainbow flags during the Gay Pride parade in Pristina on October 10, 2018. Hundreds of Kosovans marched along the main street on October 10 during a Gay parade demanding “freedom” and “equal rights” in the patriarchal and Muslim majority country with little tolerant views on sexuality. Waving rainbow flags and banners with the motto of the parade “In the Name of Freedom”, they also said that they were “walking for those who cannot join us”. (Photo by Armend Nimani/AFP Photo) 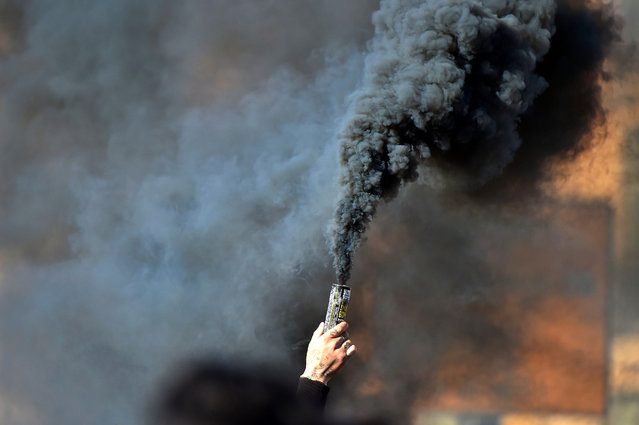 A protester lights a flare during a one-day nationwide strike over President Emmanuel Macron's policies on October 9, 2018 in Nantes, western France. (Photo by Loic Venance/AFP Photo) 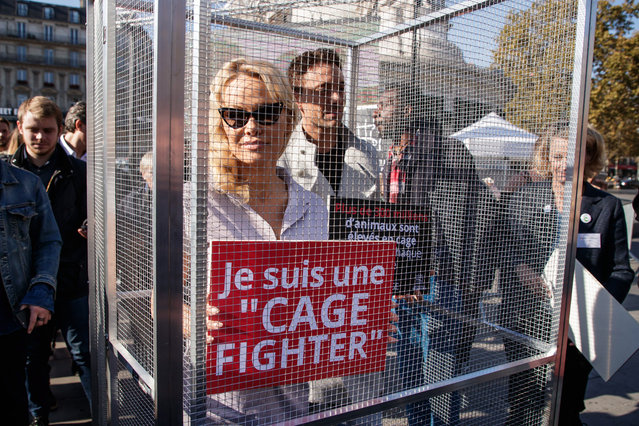 US-Canadian actress Pamela Anderson (L) and TV show partner the French dancer Maxime Deremez (R) poses for photographs inside a cage as they participate in a demonstration against caged farming named “End of Cage Age” organised by international NGO, Compassion in World Farming (CIWF) in Paris, France, 10 October 2018. Anderson is in France to take part in the French version of the TV show “Dancing with the Stars”. (Photo by Christophe Petit Tesson/EPA/EFE) 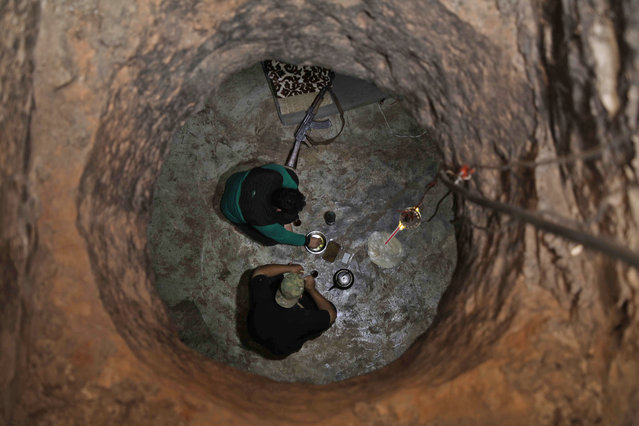 Syrian rebel-fighters with the National Liberation Front (NLF) are seen through a hole siting in a covered structure in the northwestern countryside of Aleppo province on October 9, 2018. Jihadists and Turkish-backed rebels in Syria's last major opposition stronghold have withdrawn heavy weapons from nearly all of a planned buffer zone, a monitor said today, a day ahead of deadline. (Photo by Aaref Watad/AFP Photo) 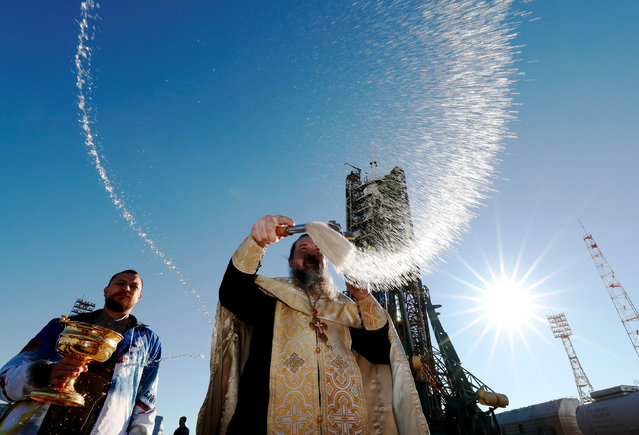 An Orthodox priest conducts a blessing in front of the Soyuz MS-10 spacecraft set on the launchpad ahead of its upcoming launch, at the Baikonur Cosmodrome in Kazakhstan, October 10, 2018. (Photo by Shamil Zhumatov/Reuters) 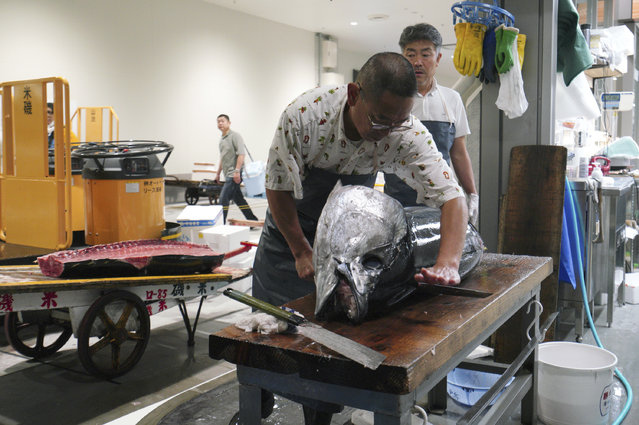 A worker cuts a fresh tuna with an edged tool at a wholesale shop at newly opened Toyosu Market, in Tokyo Thursday, October 11, 2018. Tokyo's famous fish market reopened Thursday at a new location but with an old tradition: the tuna auction. (Photo by Eugene Hoshiko/AP Photo) 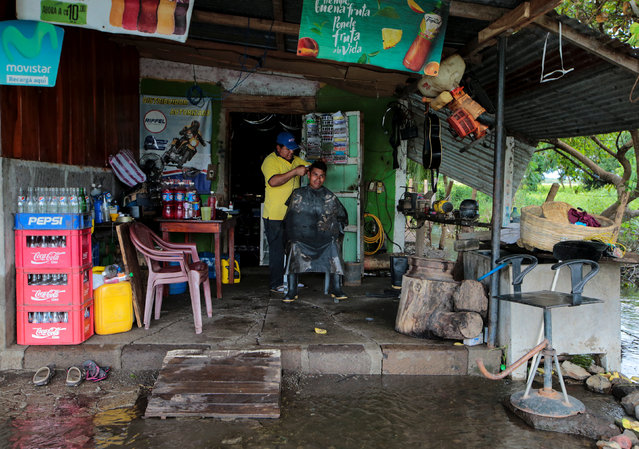 A barber cuts hair at his house, flooded by heavy rains in Malacatoya town, Nicaragua on October 9, 2018. (Photo by Oswaldo Rivas/Reuters) 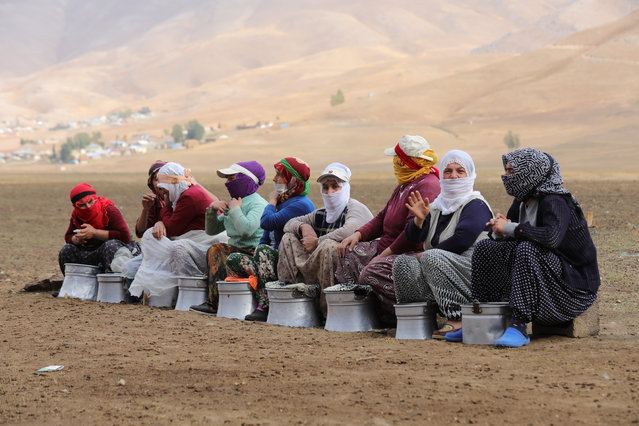 Women arrive at the highlands to milk sheep after a long mule ride in Catak district of Turkey's eastern Van province on October 01, 2018. Women who milk animals are called “Beriwans”. Beriwans' journey to milk sheep begins with three hours ride on back of mules before reaching highlands where sheep are found. (Photo by Ali Ihsan Ozturk/Anadolu Agency/Getty Images) 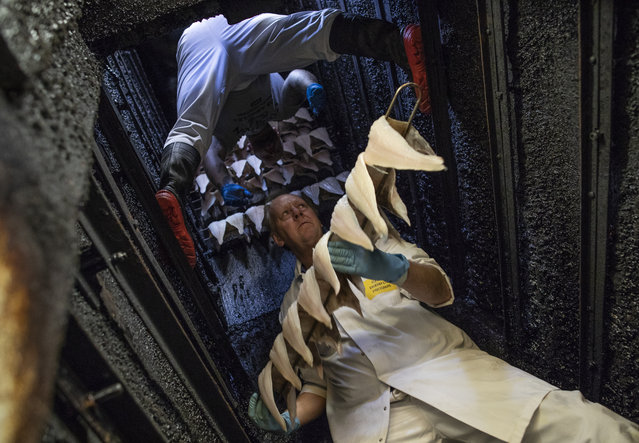 Haddock is hung in the chimney to be smoked at Alfred Enderby Ltd fish smokers, on Grimsby Fish Docks on October 8, 2018 in Grimsby, England. Alfred Enderby have been curing and smoking fish over smoldering wood shavings in their original tar lined brick smokehouses for over a hundred years. Grimsby was once home to the largest fleet of fishing trawlers in the UK, but now sees most of it's fish arriving for daily auction on lorries from Faroe Islands, Norway, Iceland and the North Sea via ports such as Peterhead in Scotland. The fish, predominantly Cod and Haddock makes it's way to processing plants before being prepared for sale to customers including restaurants and supermarkets across the UK and European Union. A proportion is bought by curers in the Grimsby area to be smoked. Grimsbys “traditionally smoked fish”, cured in these smokehouses since the mid-19th century, enjoys Protected Geographical Indication, (PGI) Status by EU law, similar to Champagne or Roquefort Cheese in France. The fate of such protections is uncertain in light of Britain's impending exit from the EU, which was supported by around 70% of voters in the surrounding North East Lincolnshire region. (Photo by Dan Kitwood/Getty Images) 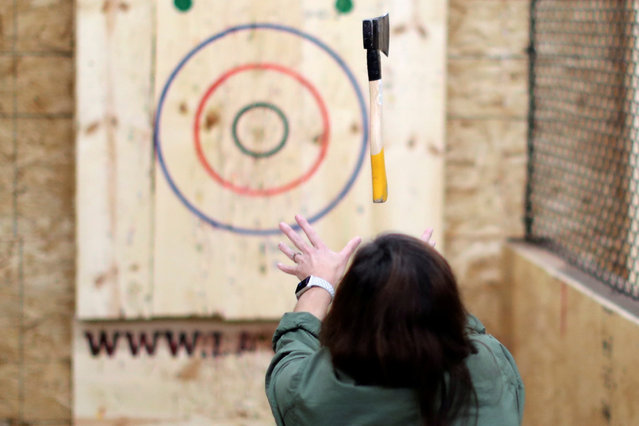 Teri Watson participates in axe throwing, a sport that started in the Canadian backwoods and is growing in popularity in U.S. cities, at LA Ax in North Hollywood, Los Angeles on October 10, 2018. (Photo by Lucy Nicholson/Reuters) 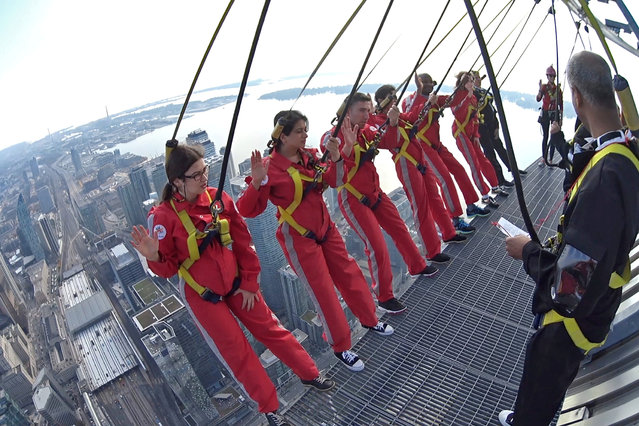 Six new Canadians take their oath of citizenship while harnessed on the CN Tower's “Edgewalk” 356 metres (1,168 feet) above Toronto, Ontario, Canada in a still image from video October 9, 2018. (Photo by CN Tower/Handout via Reuters) 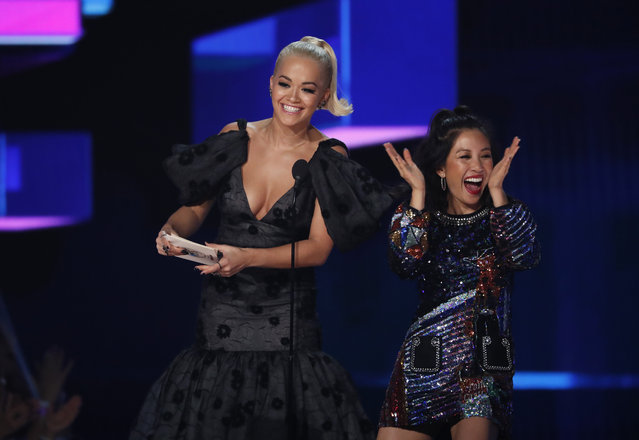 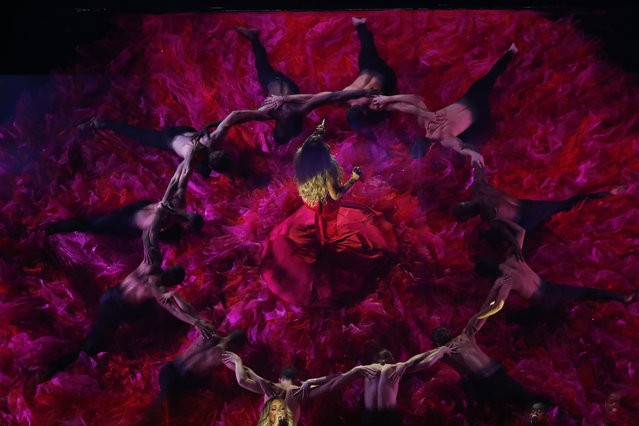 Mariah Carey performs “With You” onstage during the 2018 American Music Awards at Microsoft Theater on October 9, 2018 in Los Angeles, California. (Photo by Mario Anzuoni/Reuters) 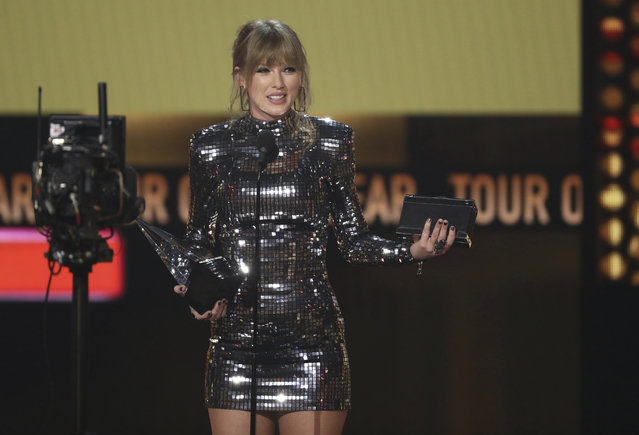 Taylor Swift accepts the award for tour of the year at the American Music Awards on Tuesday, October 9, 2018, at the Microsoft Theater in Los Angeles. (Photo by Matt Sayles/Invision/AP Photo) 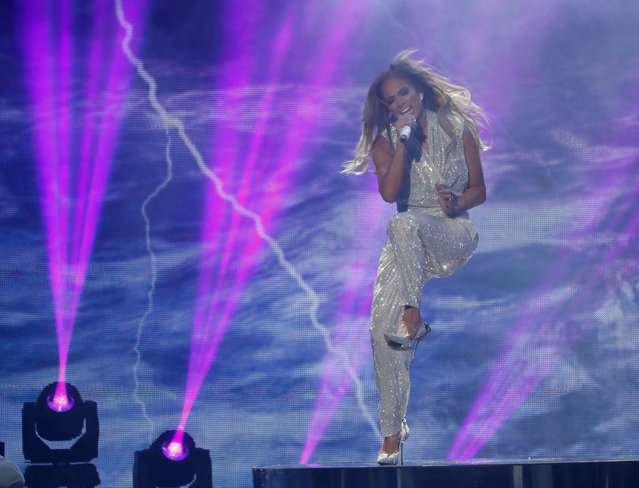 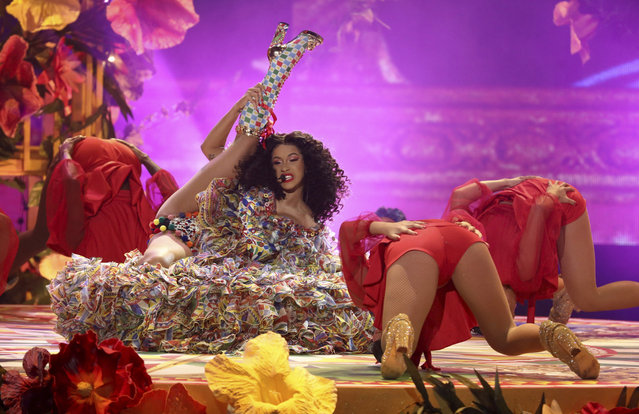 Cardi B performs “I Like It” at the American Music Awards on Tuesday, October 9, 2018, at the Microsoft Theater in Los Angeles. (Photo by Matt Sayles/Invision/AP Photo)
Edit Del
11 Oct 2018 08:26:00, post received 0 comments
Publication archive:
←   →
Popular tags:
All tags
Last searches: