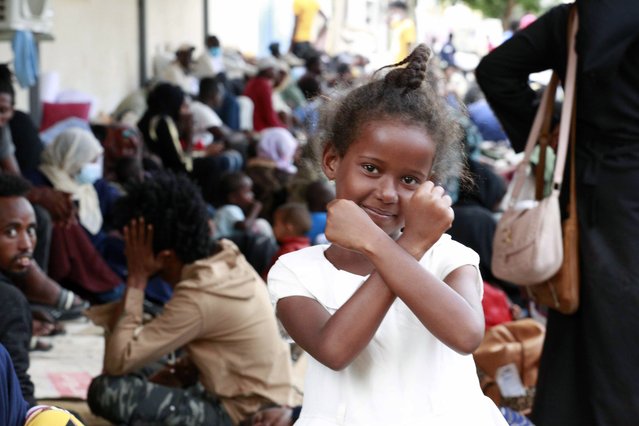 A migrant girl joins others in protest, Saturday, October 9, 2021, in front of the office of the United Nation’s humanitarian body in Tripoli, Libya. The demonstration comes after U.N. officials said on the same day that guards at a Libyan detention center for migrants shot and killed at least six people amid chaos in the overcrowded facility. (Photo by Yousef Murad/AP Photo) 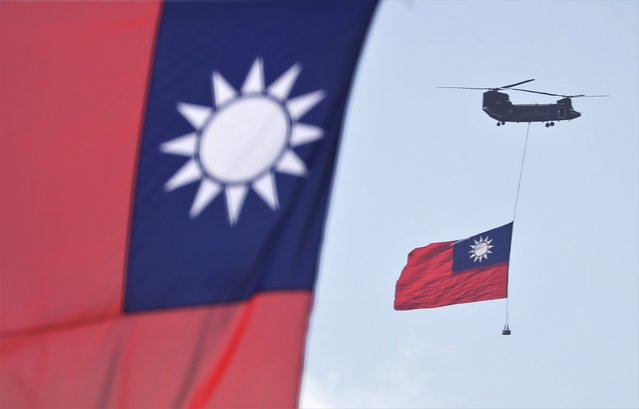 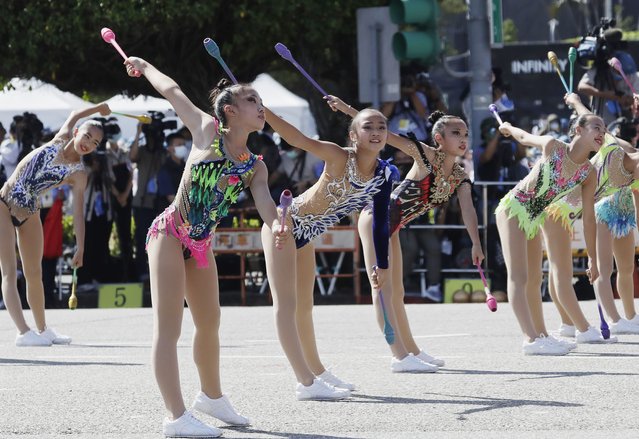 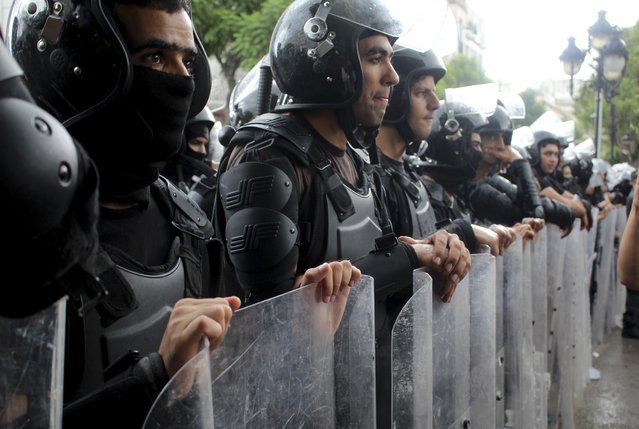 Police attend a gathering of protesters demonstrating against Tunisian President Kais Saied in Tunis, Tunisia. Sunday, October 10, 2021. Thousands of people demonstrated in Tunisia’s capital Sunday against the president’s seizure of powers in July and other moves seen as threatening the country’s democratic gains since the Arab Spring. (Photo by Hassene Dridi/AP Photo) 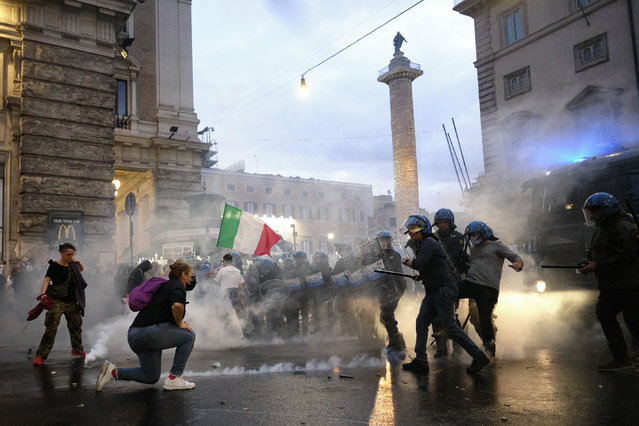 Demonstrators and police clash during a protest, in Rome, Saturday, October 9, 2021. Thousands of demonstrators protested Saturday in Rome against the COVID-19 health pass that Italian workers, both the public and private sectors, must display to access their workplaces from Oct. 15 under a government decree. (Photo by Mauro Scrobogna/LaPresse via AP Photo) 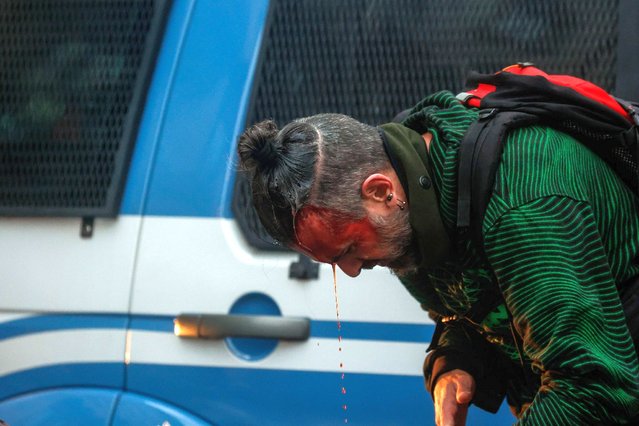 A protester is seen during clashes between policemen and the “No Green Pass” protesters in the center of Rome, Italy, 09 October 2021. Several hundred people attended the protest called upon by extreme-right party Forza Nuova (FN) and no-vax chat channel “Basta Dittatura” (lit.: Enough Dictatorship) to scrap the so-called Green Pass. Since 06 August, in order to be allowed access to certain activities and services, everyone over the age of 12 in Italy needs to present a COVID-19 “Green Pass” health certificate. (Photo by Giuseppe Lami/EPA/EFE) 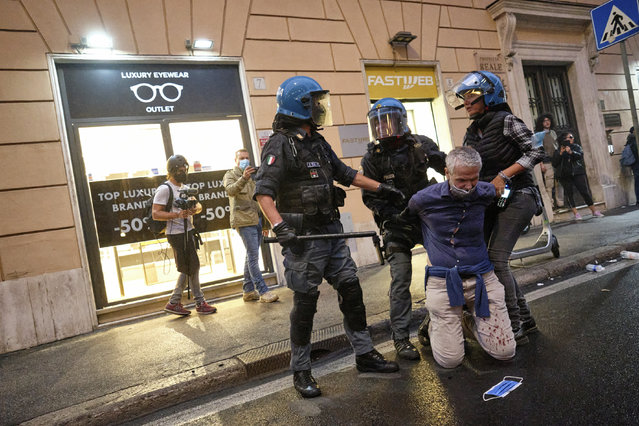 A demonstrator is apprehended by police officers after clashes during a protest, in Rome, Saturday, October 9, 2021. (Photo by Mauro Scrobogna/LaPresse via AP Photo) 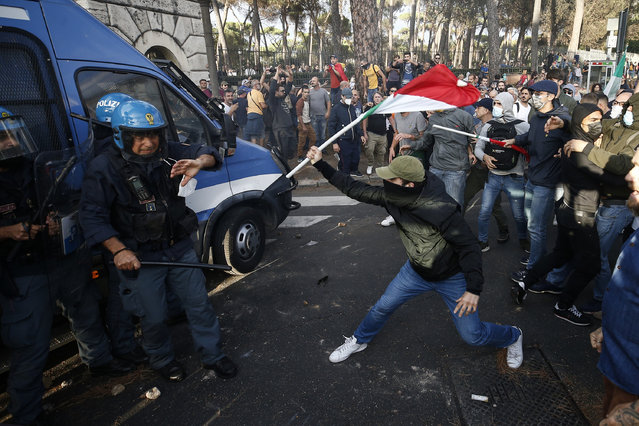 Police clashes with demonstrators during a protest, in Rome, Saturday, October 9, 2021. (Photo by Cecilia Fabiano/LaPresse via AP Photo) 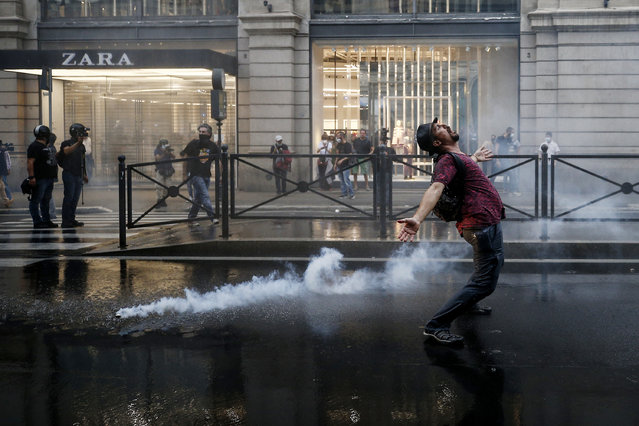 A demonstrator reacts as police fire teargas during a protest, in Rome, Saturday, October 9, 2021. (Photo by Cecilia Fabiano/LaPresse via AP Photo) 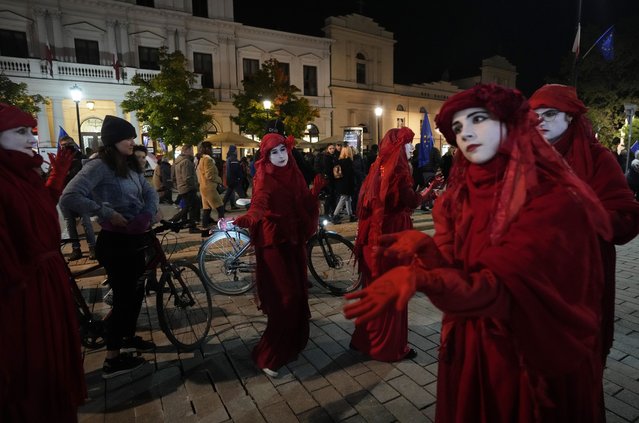 Activists from Extinction Rebellion during a demonstration in support of Poland's EU membership, in Warsaw, Poland, Sunday, October 10, 2021. Poland's constitutional court ruled Thursday that Polish laws have supremacy over those of the European Union in areas where they clash, a decision likely to embolden the country's right-wing government and worsen its already troubled relationship with the EU. (Photo by Czarek Sokolowski/AP Photo) 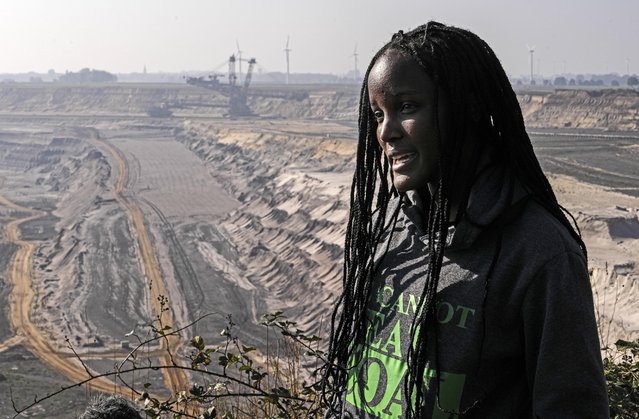 Climate activist Vanessa Nakate from Uganda gives an interview to the Associated Press during her visit to the Garzweiler open-cast coal mine in Luetzerath, western Germany, Saturday, October 9, 2021. Garzweiler, operated by utility giant RWE, has become a focus of protests by people who want Germany to stop extracting and burning coal as soon as possible. (Photo by Martin Meissner/AP Photo) 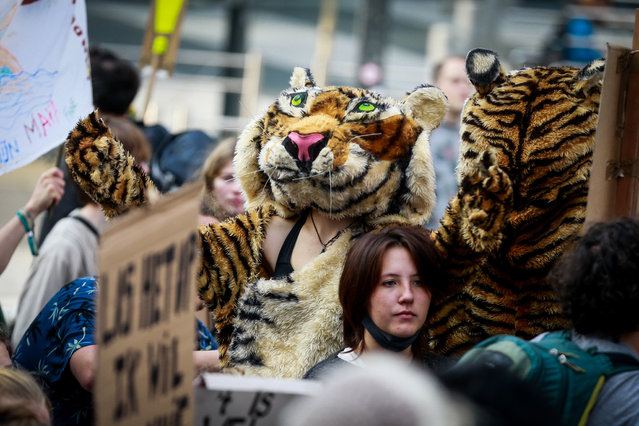 Thousands of people gather to call for urgent measures to combat climate change during a demonstration, in Brussels, Belgium, 10 October 2​021. (Photo by Stephanie Lecocq/EPA/EFE) 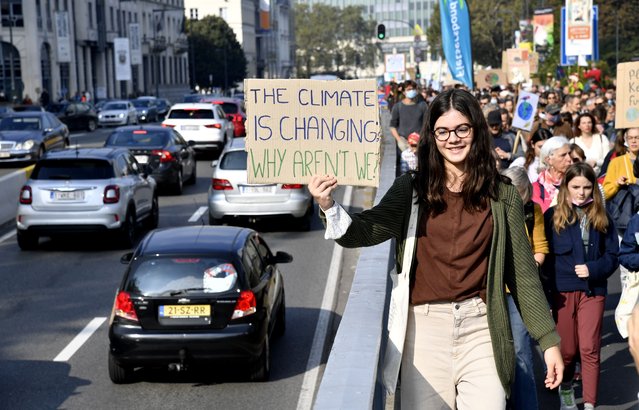 A girl holds up a sign to oncoming traffic as she participates in a climate march and demonstration in Brussels, Sunday, October 10, 2021. Some 80 organizations are joining in a climate march through Brussels to demand change and push politicians to effective action in Glasgow later this month. (Photo by Geert Vanden Wijngaert/AP Photo) 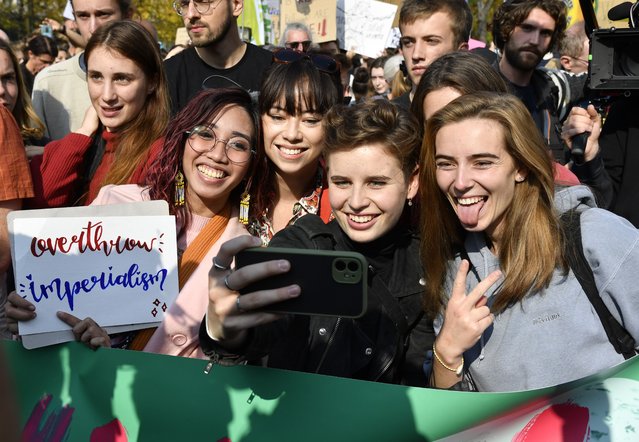 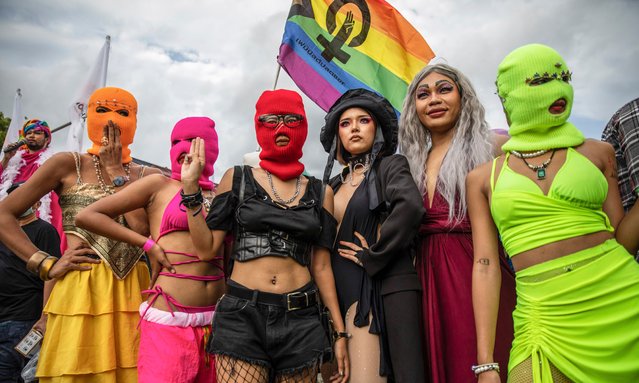 Members of the Feminist Liberation Front pose for a photo during a rally on October 9, 2021 in Bangkok, Thailand. The Feminist's Liberation Front is a democratic reform group focused on promoting gender equality and LGBTQ rights in Thailand. While raising awareness of issues such as marriage equality, gender-based violence, and oppression, the speakers at rally's organized by the Feminist Liberation Front also call for institutional reform and the repeal of Section 112, a criminal code in Thailand's lese majeste laws which carry up to 15 years in prison. Under the leadership of Chumaporn “Waaddao” Taengkliang, the Feminist Liberation Front acts as a safe space for feminists, members of the LGBTQ community, activists and allies while maintaining peaceful, colorful protests promoting inclusivity and human rights. While globally Thailand is considered an inclusive country for LGBTQ+ communities and tourists, those living here struggle for equal rights as courts continue to postpone rulings in a groundbreaking LGBTQ+ marriage equality case. (Photo by Lauren DeCicca/Getty Images) 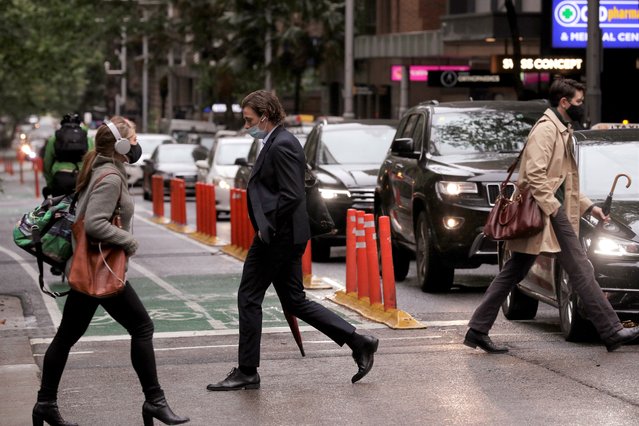 People and cars filter into the city after more than 100 days of lockdown to help contain the COVID-19 outbreak in Sydney, Monday, October 11, 2021. (Photo by Rick Rycroft/AP Photo) 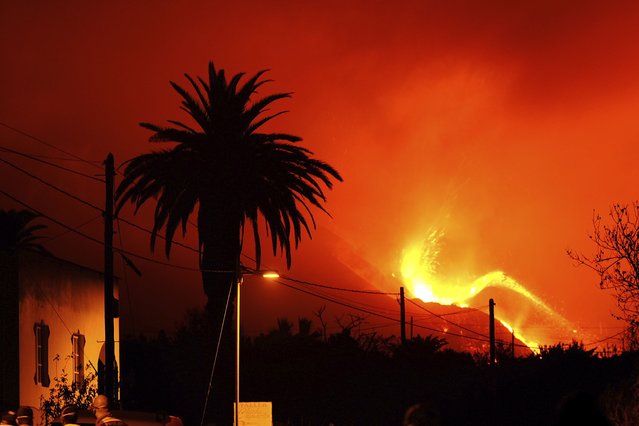 A volcano continues to spew out lava on the Canary island of La Palma, Spain in the early hours of Sunday, October 10, 2021. A new river of lava has belched out from the La Palma volcano, spreading more destruction on the Atlantic Ocean island where molten rock streams have already engulfed over 1,000 buildings. The partial collapse of the volcanic cone overnight sent a new lava stream Saturday heading toward the western shore of the island. (Photo by Daniel Roca/AP Photo) 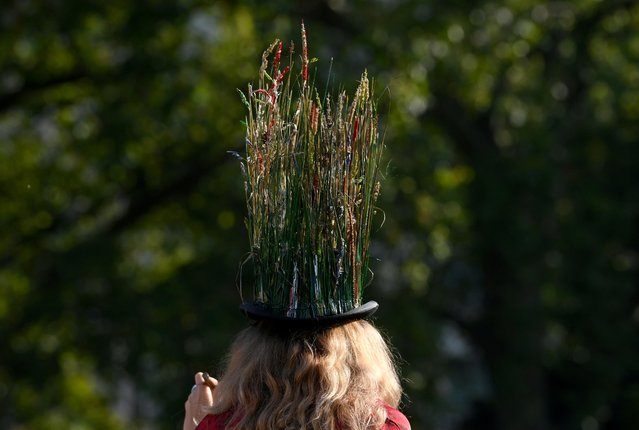 An environmental campaigner takes part in a march and delivery of a petition to Buckingham Palace, demanding that the British royal family rewild their land, ahead of the COP26 climate summit due to take place in November, in London, Britain, October 9, 2021. (Photo by Toby Melville/Reuters) 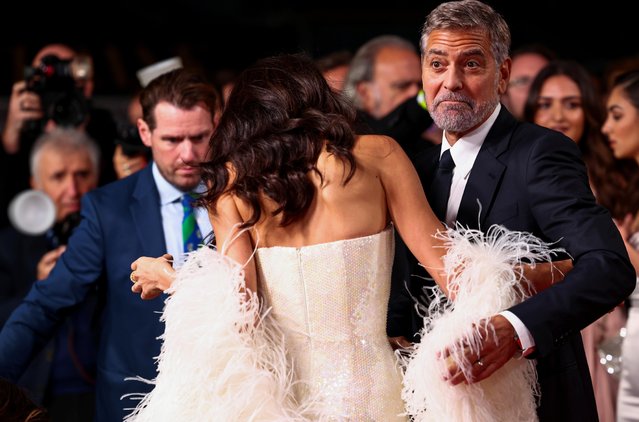 Director George Clooney reacts as he and his wife lawyer Amal Clooney arrive for a screening of the film “The Tender Bar” as part of the BFI London Film Festival, in London, Britain, October 10, 2021. (Photo by Henry Nicholls/Reuters) 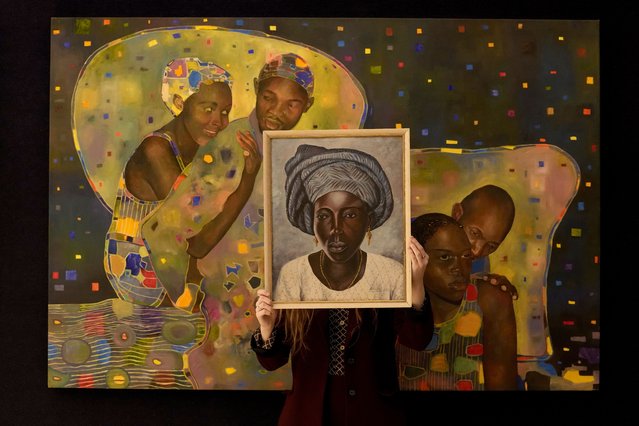 A Bonhams employee holds a painting called “Portrait of a Yoruba Lady” by Akinola Lasekan in front of a painting called “The willing & unwilling” by Joseph Ntensibe at the auction rooms in London, Friday, October 8, 2021. The paintings will be up for auction in Bonhams Modern and Contemporary African Art Sale on Oct. 12. (Photo by Kirsty Wigglesworth/AP Photo)
Edit Del
11 Oct 2021 07:40:00, post received 0 comments
Publication archive:
←   →
Popular tags:
All tags
Last searches: