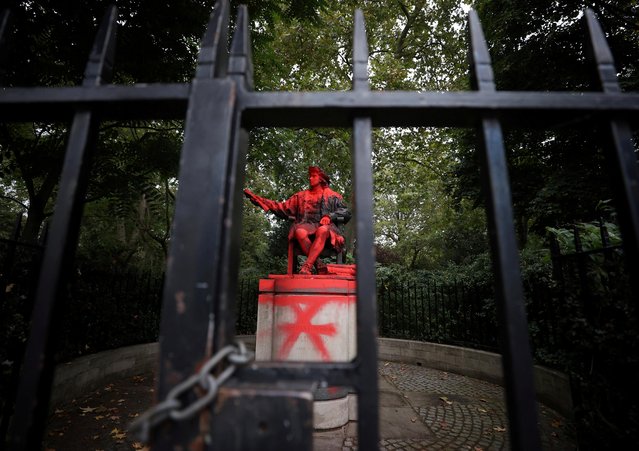 A vandalised statue of Christopher Columbus is pictured in London, Britain, October 12, 2021. (Photo by Hannah McKay/Reuters) 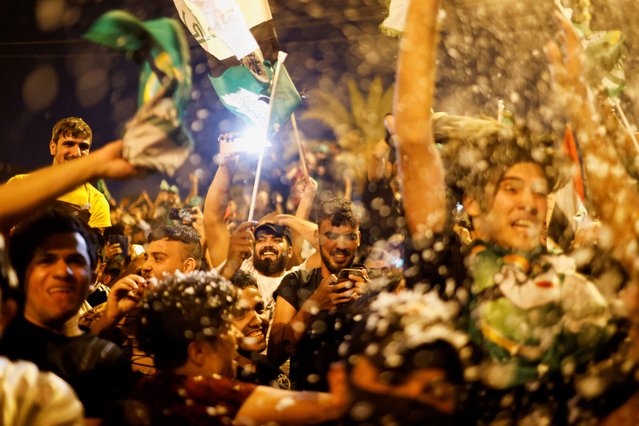 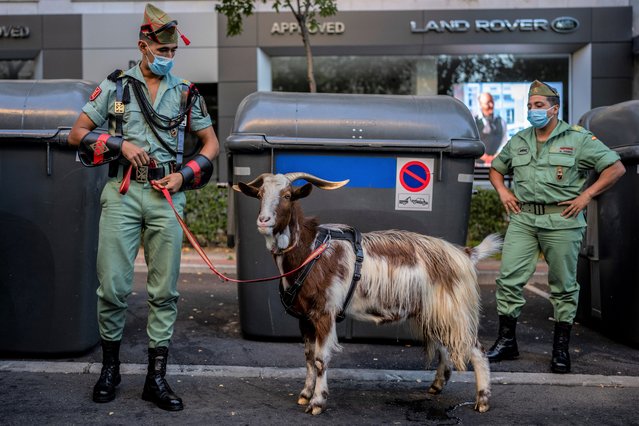 Members of La Legion, an elite unit of the Spanish Army, including a goat they use as a pet wait for the start of a military parade celebrating a holiday known as “Dia de la Hispanidad” or Hispanic Day in Madrid, Spain, Tuesday, October 12, 2021. Spain commemorates Christopher Columbus' arrival in the New World and also Spain's armed forces day. (Photo by Manu Fernandez/AP Photo) 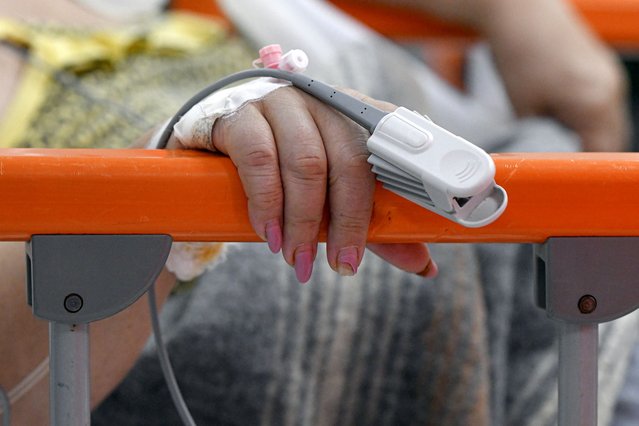 A patient lies on a bed in the emergency room, turned into a CODIV-19 unit due to the high number of cases, at the Bagdasar-Arseni hospital in Bucharest, Romania, Tuesday, October 12, 2021. Romania reported on Tuesday nearly 17,000 new COVID-19 infections and 442 deaths, the highest number of coronavirus infections and deaths in a day since the pandemic started, as the nation's health care system struggles to cope with an acute surge of new cases. (Photo by Andreea Alexandru/AP Photo) 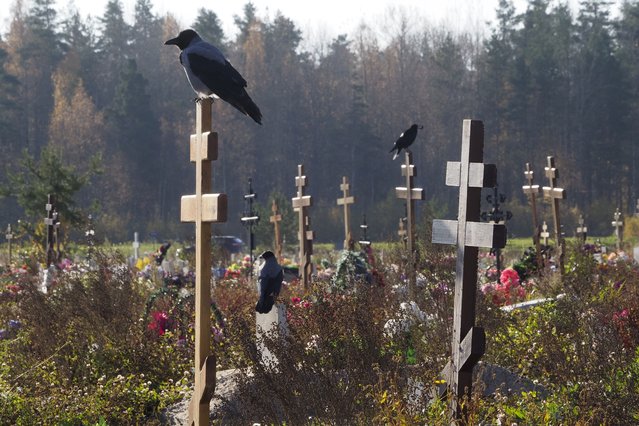 Crows sit on grave crosses in the section of a cemetery reserved for coronavirus victims in Kolpino, outside St. Petersburg, Russia, Tuesday, October 12, 2021. Russia hit another record of daily coronavirus deaths Tuesday as the country struggled with a rapid surge of infections and lagging vaccination rates, but authorities have been adamant that there would be no new national lockdown. (Photo by Dmitri Lovetsky/AP Photo) 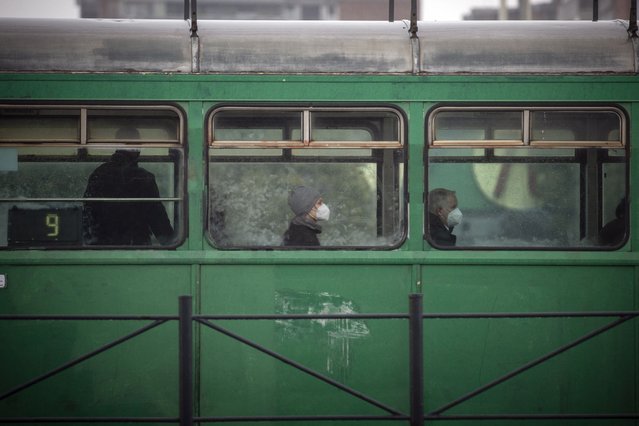 Passengers wearing face masks ride a tram in Belgrade on October 11, 2021, amid the Covid-19 (novel coronavirus) pandemic. Serbia has been averaging more than 6,500 cases a day over the past two weeks, according to AFP data, an infection rate of almost 93,5 per 100,000 people – by far the highest in the world. Packed bars, few masks and almost no restrictions – in Serbia it seems the pandemic is over. But it's a cruel illusion, as the Balkan country currently tops the global charts for infection rates. Despite having a variety of jabs available, the country's vaccination drive stalled after just over 40 percent of its seven-million population were inoculated. (Photo by Oliver Bunic/AFP Photo) 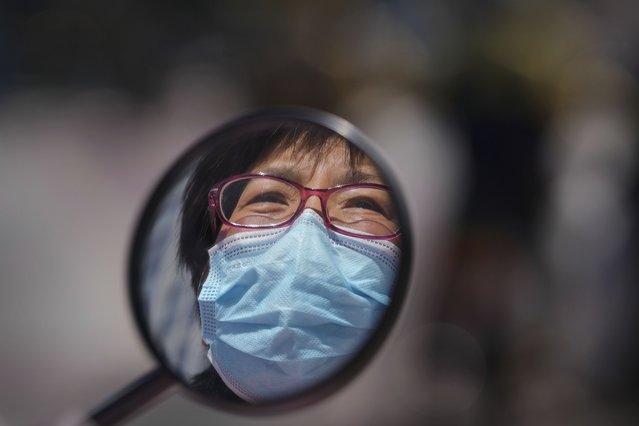 A woman wearing a face mask to help curb the spread of the coronavirus is reflected in her wing mirror of her electric-powered scooter as she waits at an intersection in Beijing, Tuesday, October 12, 2021. (Photo by Andy Wong/AP Photo) 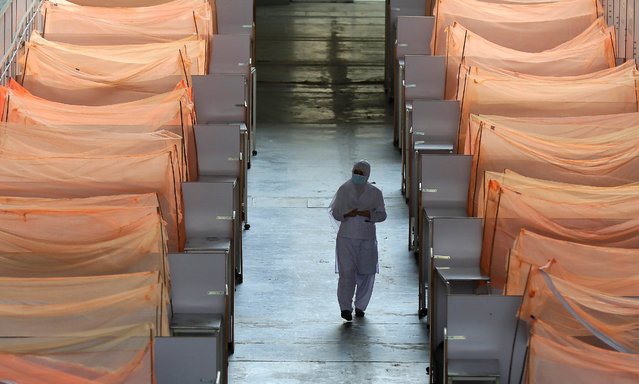 Patients suffering from dengue fever receive medical treatment at a field hospital setup by the Punjab government for dengue patients in Lahore, Pakistan, 12 October 2021. Officials in Pakistan are reporting a continued increase in dengue fever cases, with the numbers in the thousands, and experts warn the next coming weeks will be critical. (Photo by Rahat Dar/EPA/EFE) 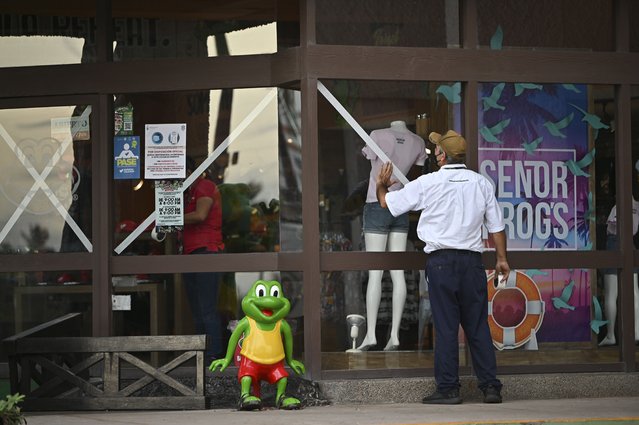 A man puts tape to protect the windows of a business before the arrival of the storm Pamela, in Mazatlan, Mexico, Tuesday, October 12, 2021. Hurricane Pamela weakened to a tropical storm Tuesday afternoon as it meandered off Mexico's Pacific coast. Forecasters said it was expected to regain strength overnight and be a hurricane when making landfall somewhere near the port of Mazatlan Wednesday. (Photo by Roberto Echeagaray/AP Photo) 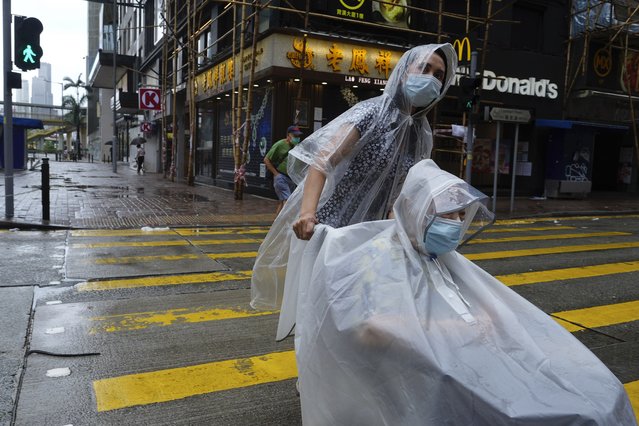 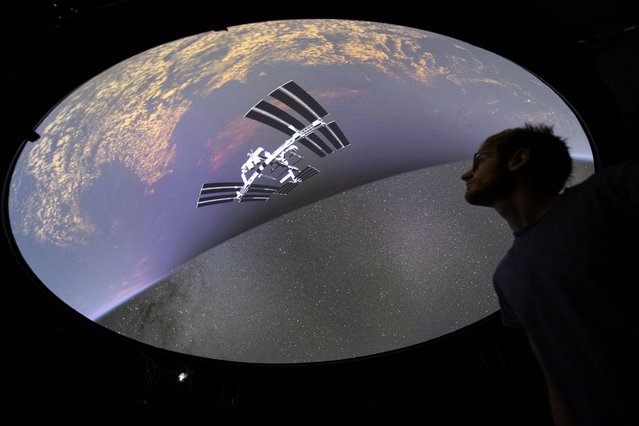 Hadrien Gurnel, software engineer EPFL's Laboratory for Experimental Museology (eM+) explores the most detailed 3D map of the universe with the virtual reality software VIRUP, Virtual Reality Universe Project developed by Swiss Federal Institute of Technology (EPFL) scientists of the Laboratory of Astrophysics (LASTRO) on a full dome screen at EPFL's Laboratory for Experimental Museology (eM+), in St-Sulpice near Lausanne, Switzerland, Tuesday, October 12, 2021. The open-source beta software VIRUP that builds, in real-time, a virtual universe based on the most detailed contemporary astrophysical and cosmological data. (Photo by Laurent Gillieron/Keystone via AP Photo) 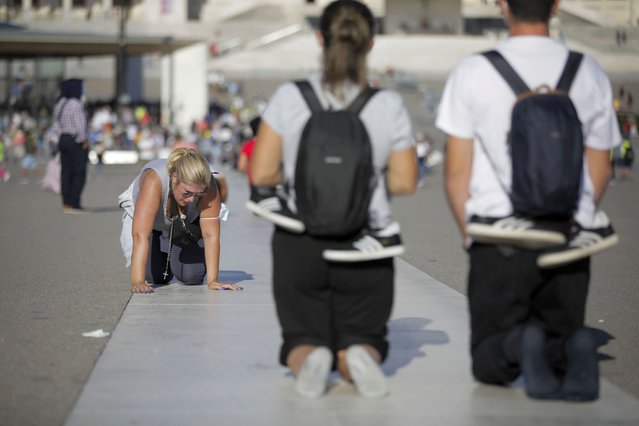 Pilgrims at the Shrine of Fatima, in Ourem, Portugal, 12 October 2021. This pilgrimage, which celebrates the 6th Apparition of Our Lady, with particular emphasis on the so-called “miracle of the Sun”, is the last major anniversary pilgrimage of a pastoral year still very much marked by the coronavirus pandemic. (Photo by Paulo Cunha/EPA/EFE) 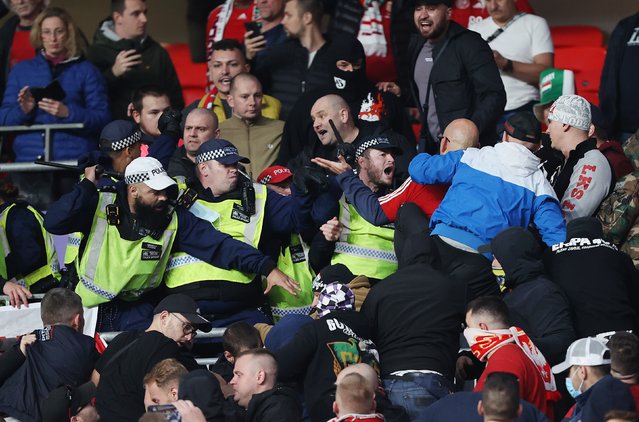 Police clash with Hungary fans during the 2022 FIFA World Cup Qualifier match between England and Hungary at Wembley Stadium on October 12, 2021 in London, England. (Photo by Charlotte Wilson/Offside/Offside via Getty Images) 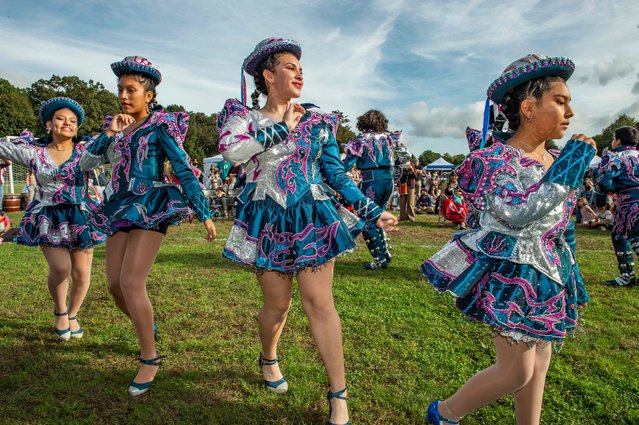 The Pumawari Tusuy group performs for the crowd gathered in the park at the first Annual Indigenous Peoples' Day Ceremonial Celebration in Newton, Massachusetts on October 11, 2021. October 11 is a federal holiday to mark Columbus Day, but the day was also officially recognized as Indigenous Peoples' Day following a proclamation by US President Joe Biden. (Photo by Joseph Prezioso/AFP Photo) 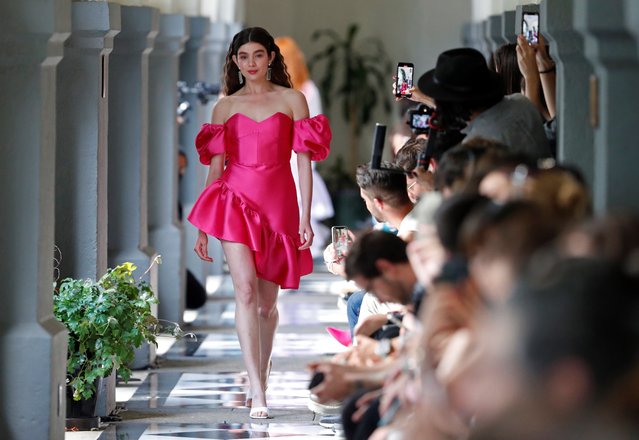