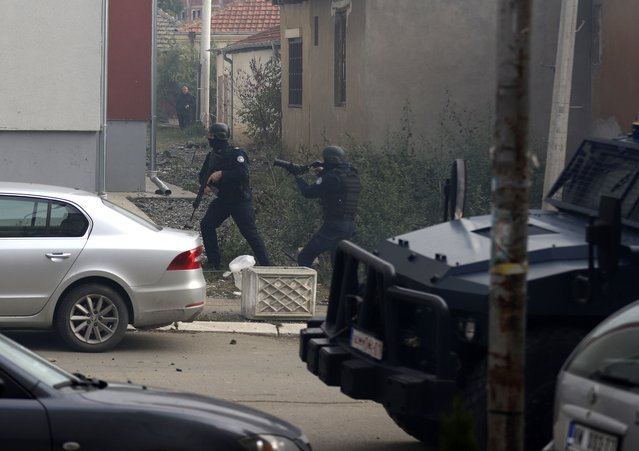 Kosovo police officers guard a street in the northern Serb-dominated part of ethnically divided town of Mitrovica, Kosovo, Wednesday, October 13, 2021. Kosovo police have clashed with ethnic Serbs in the north during an operation against smuggling of goods. A police statement said that an operation against smuggled goods was held in four areas, including northern Mitrovica which is mostly populated by ethnic Serbs. (Photo by Bojan Slavkovic/AP Photo) 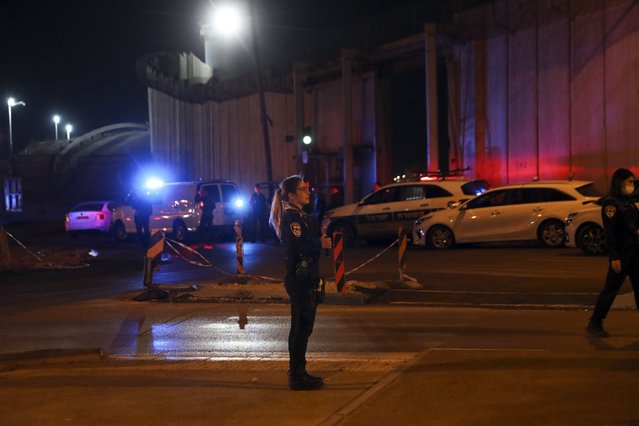 Israeli police examine the scene of a car-ramming attack at the Qalandia checkpoint between Jerusalem and the West Bank city of Ramallah, Thursday, October 14, 2021. A Palestinian car-ramming attack at a major checkpoint north of Jerusalem overnight left a member of the paramilitary Border Police moderately wounded, the police said Thursday. They say officers fired on the vehicle, causing it to crash into a wall, and arrested the suspect, a 22-year-old from the town of Qalqilya in the occupied West Bank. (Photo by Mahmoud Illean/AP Photo) 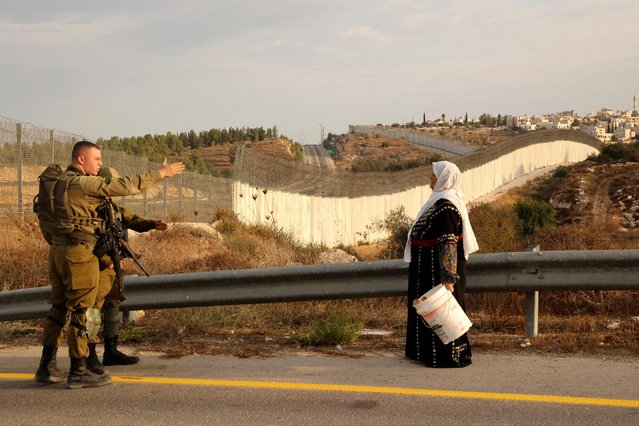 A Palestinian woman stands with others (not pictured) as they gather near an Israeli army checkpoint as they wait to reach their olives fields on the other side of Israel's separation barrier (background) after they received an special Israeli permission to harvest their olive trees, on October 13, 2021 near Bait A'wa village on the outskirts of the West Bank city of Hebron. (Photo by Hazem Bader/AFP Photo) 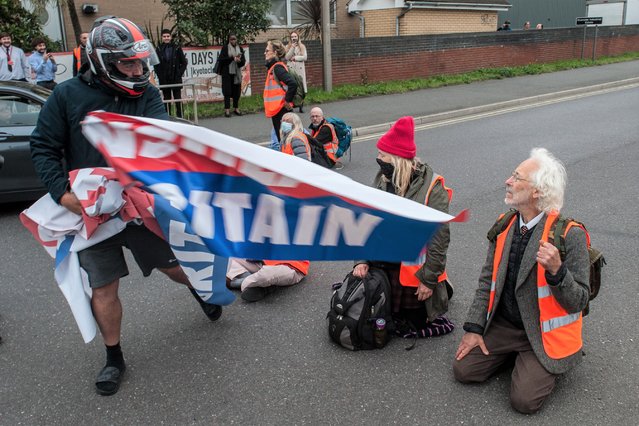 An angry motorist snatches a banner from Insulate Britain protesters blocking a junction near the Dartford Crossing on October 13, 2021 in Thurrock, England.(Photo by Guy Smallman/Getty Images) 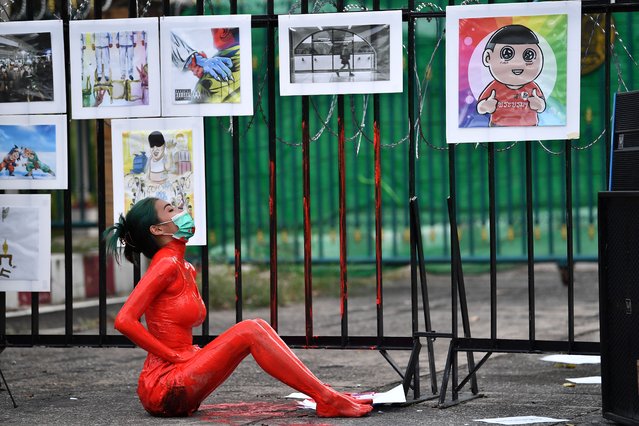 A protester is covered in red paint during a demonstration against the government of Thailand's Prime Minister Prayut Chan-O-Cha and in support of the release of political prisoners outside Bangkok Remand Prison in Bangkok on October 13, 2021. (Photo by Lillian Suwanrumpha/AFP Photo) 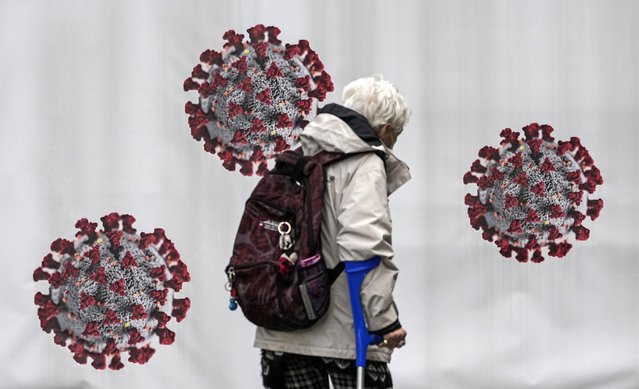 A woman passes a coronavirus test center in Duisburg, Germany, Tuesday, October 12, 2021. Germany ended free rapid corona tests for all this week. Tests remain free only for some groups, like young children and people who can not get vaccinated for medical reasons. (Photo by Martin Meissner/AP Photo) 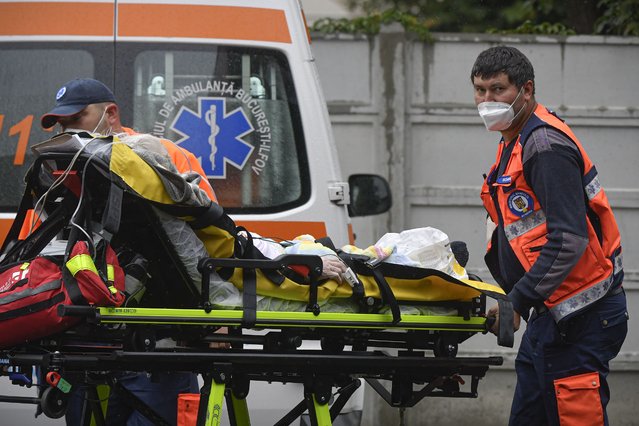 Paramedics bring an elderly patient to the emergency room, turned into a CODIV-19 unit due the high number of cases, at the Bagdasar-Arseni hospital in Bucharest, Romania, Tuesday, October 12, 2021. Romania reported on Tuesday nearly 17,000 new COVID-19 infections and 442 deaths, the highest number of coronavirus infections and deaths in a day since the pandemic started, as the nation's health care system struggles to cope with an acute surge of new cases. (Photo by Andreea Alexandru/AP Photo) 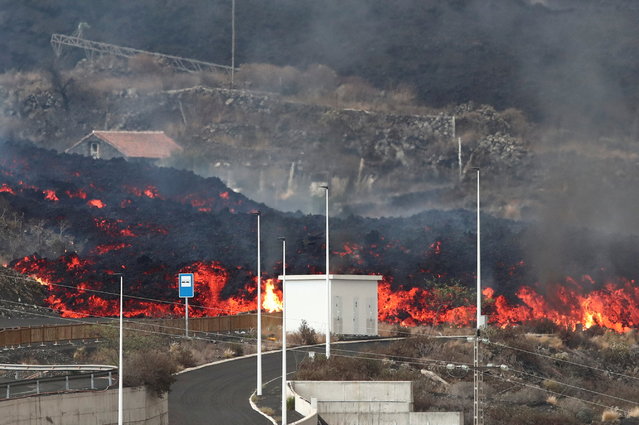 Lava rolls down behind street light posts in Los Llanos as the Cumbre Vieja volcano continues to erupt on the Canary Island of La Palma, as seen from Tajuya, Spain, October 13, 2021. (Photo by Sergio Perez/Reuters) 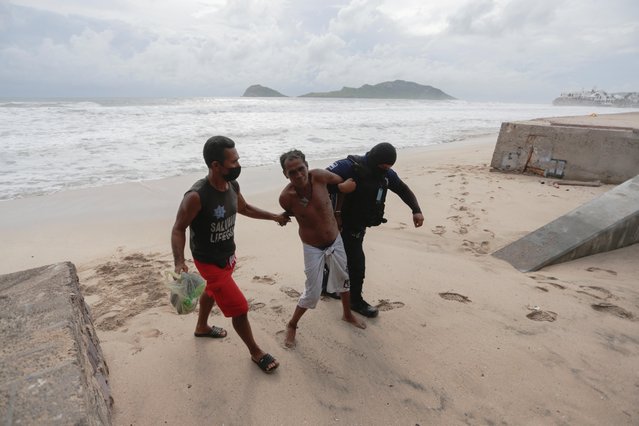 A police officer, with the help of a lifesaver, detains a man for refusing to leave a closed beach as storm Pamela approaches the Pacific coast resort, in Mazatlan, Mexico, October 12, 2021. (Photo by Daniel Becerril/Reuters) 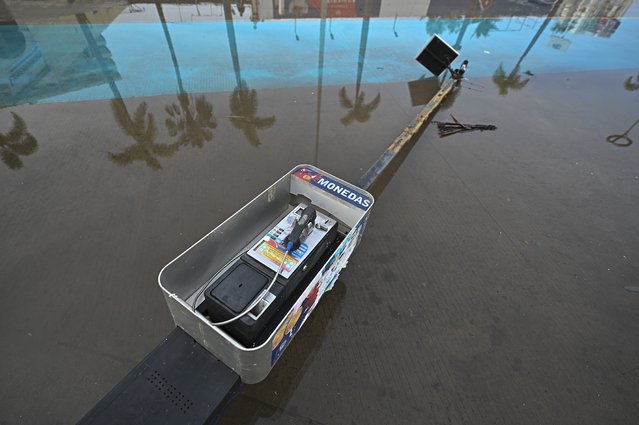 A public telephone booth lays on the sidewalk after the passing of Hurricane Pamela in Mazatlan, Mexico, Wednesday, Octoner 13, 2021. Pamela made landfall on Mexico's Pacific coast just north of Mazatlan on Wednesday, bringing high winds and rain to the port city. (Photo by Roberto Echeagaray/AP Photo) 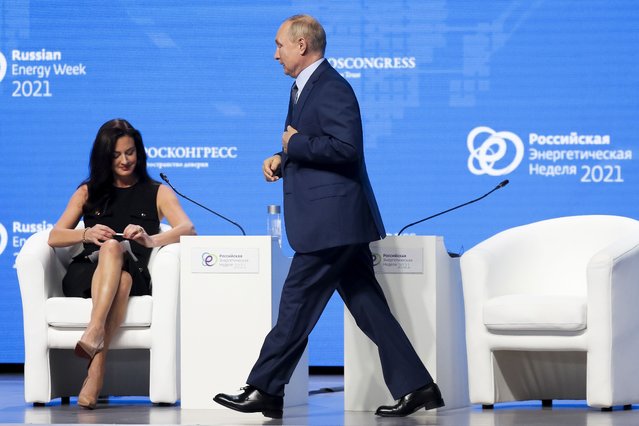 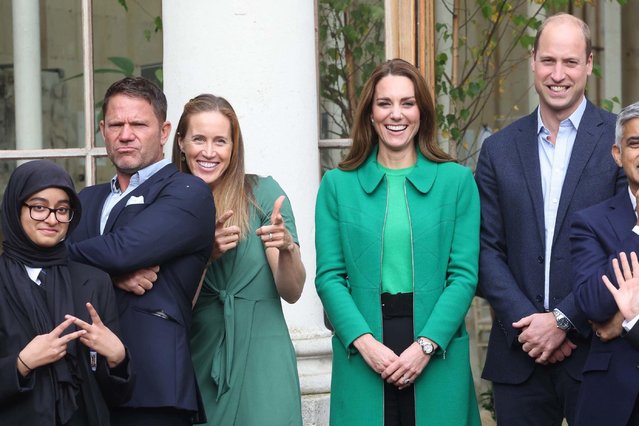 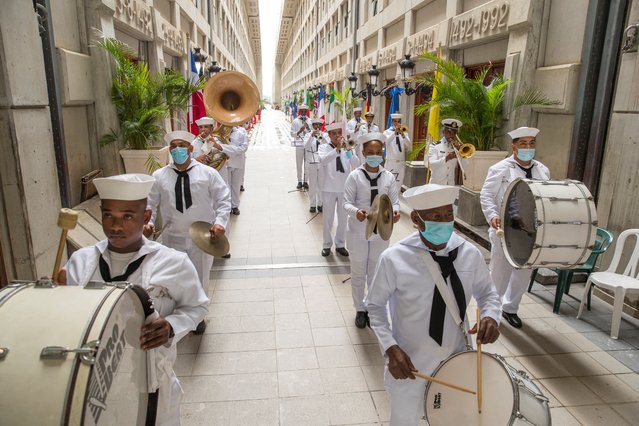 Members of the Armada music band perform during a tribute at the Mausoleum of the Columbus Lighthouse, where the remains of Cristobal Colon (Christopher Columbus) supposedly rest, on the day of the 529th anniversary of the arrival of the admiral to America, in Santo Domingo, Dominican Republic, 12 October 2021. (Photo by Orlando Barria/EPA/EFE) 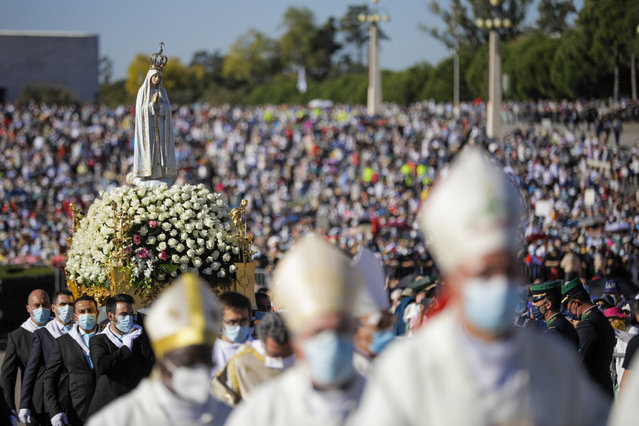 The figure of Our Lady of Fatima is carried during the traditional “farewell” pilgrimage at the Shrine of Fatima, Ourem, Portugal, 13 October 2021. This pilgrimage, which celebrates the 6th Apparition of Our Lady, with particular emphasis on the so-called “Miracle of the Sun” is the last major anniversary pilgrimage of a pastoral year still very much marked by the pandemic. (Photo by Paulo Cunha/EPA/EFE) 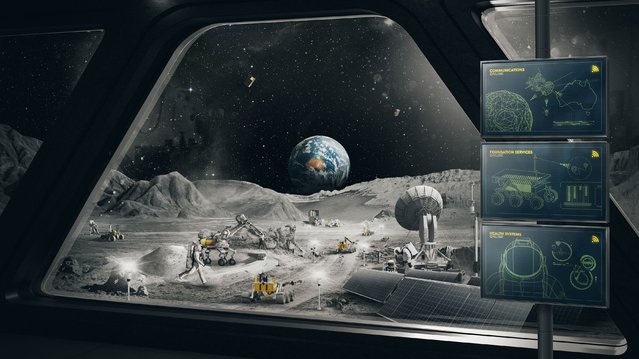 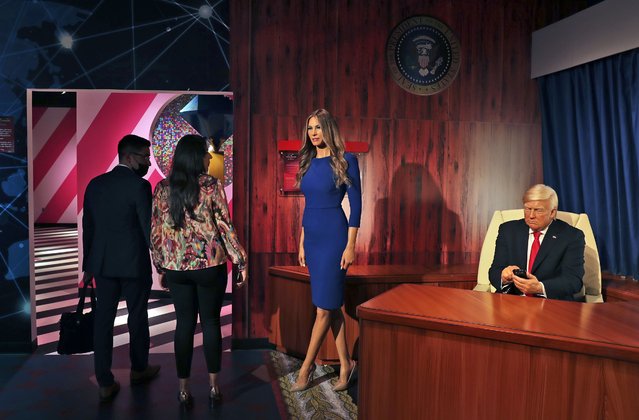 People visit the wax versions of former U.S. President Donald Trump and his wife Melania at the opening of the Madame Tussauds museum, in Dubai, United Arab Emirates, Wednesday, October 13, 2021. The lavish waxworks temple located on a small artificial island off Dubai unveiled 60 celebrities and leaders, from a sultry Kylie Jenner to a beaming Chinese President Xi Jinping, along with a handful of Bollywood dance stars striking poses. (Photo by Kamran Jebreili/AP Photo) 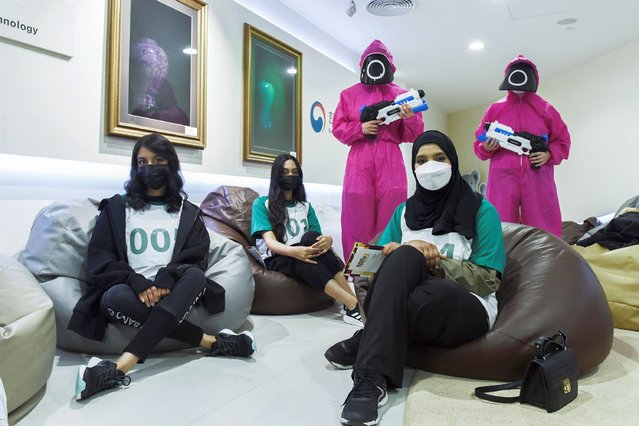 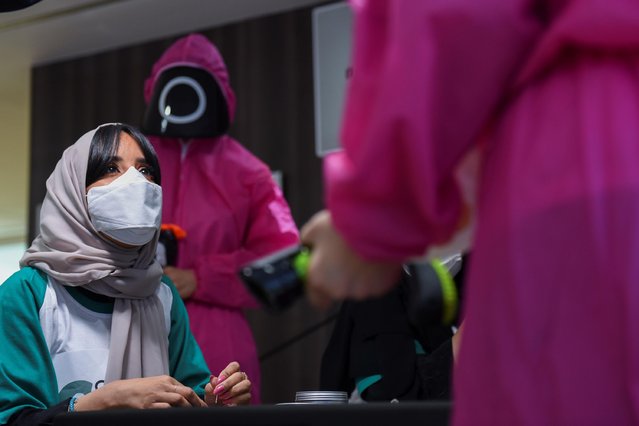 A Participant is pictured as she plays the honeycomb toffee game at the Korean Cultural Center, in Abu Dhabi, United Arab Emirates, October 12, 2021. (Photo by Vidhyaa Chandramohan/Reuters) 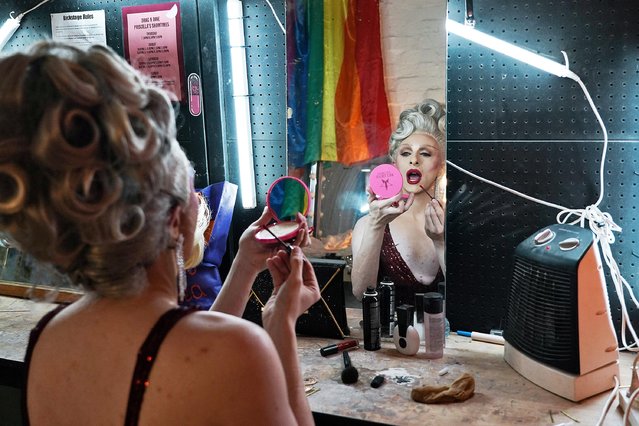 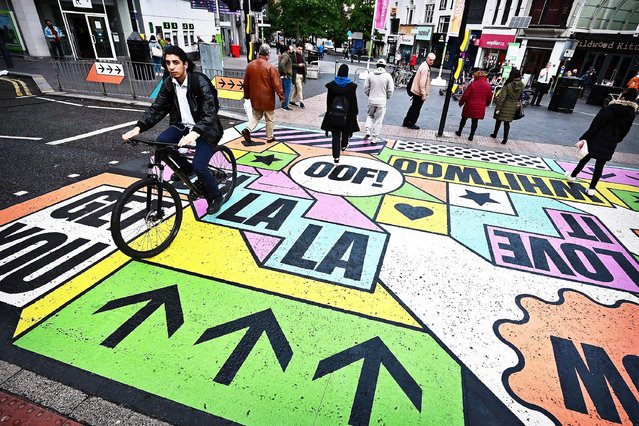 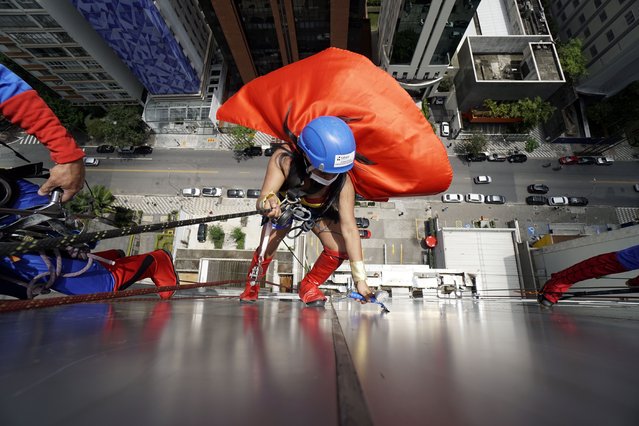