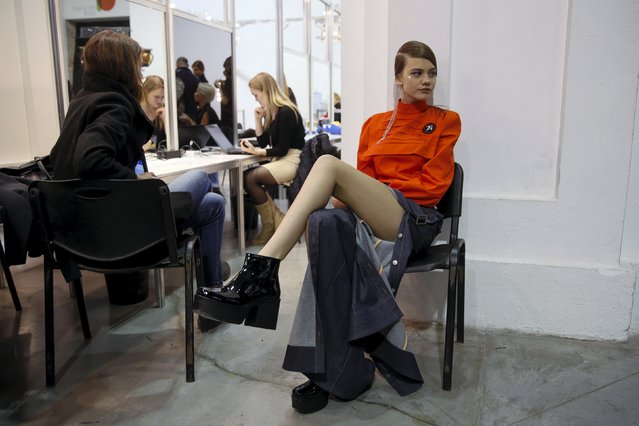 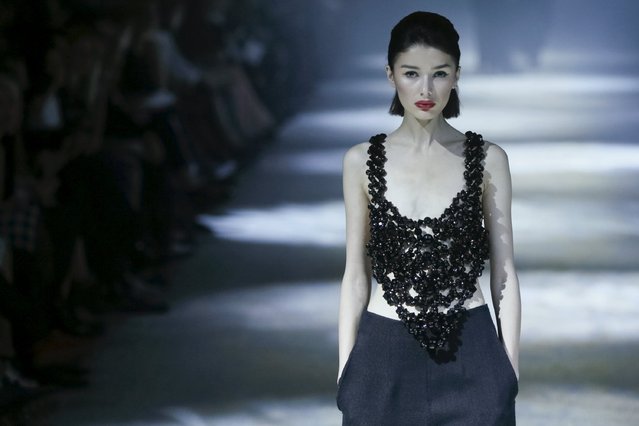 A model presents a creation by designer Datuna Sulikashvili of Georgia at Ukrainian Fashion Week in Kiev, October 16, 2015. (Photo by Valentyn Ogirenko/Reuters) 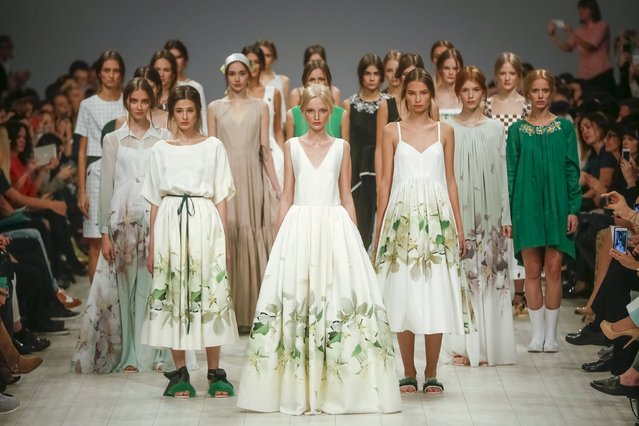 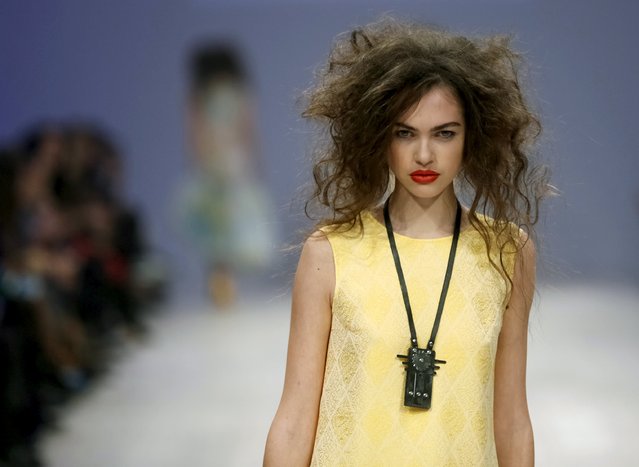 A model presents a creation by designer Aliona Serebrova of Ukraine at Ukrainian Fashion Week in Kiev, October 16, 2015. (Photo by Valentyn Ogirenko/Reuters) 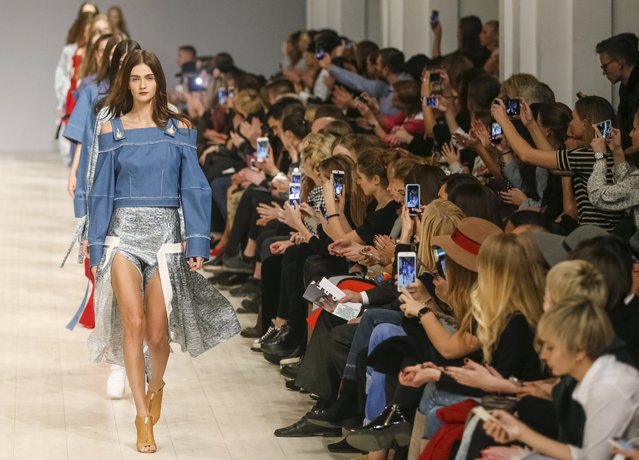 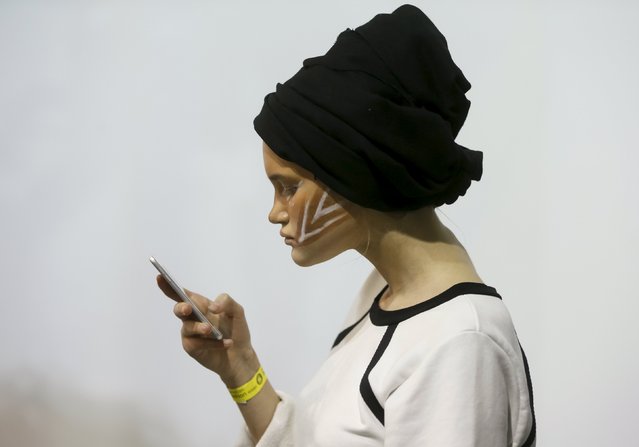 A model checks her mobile phone as she waits backstage at Ukrainian Fashion Week in Kiev, October 17, 2015. (Photo by Valentyn Ogirenko/Reuters) 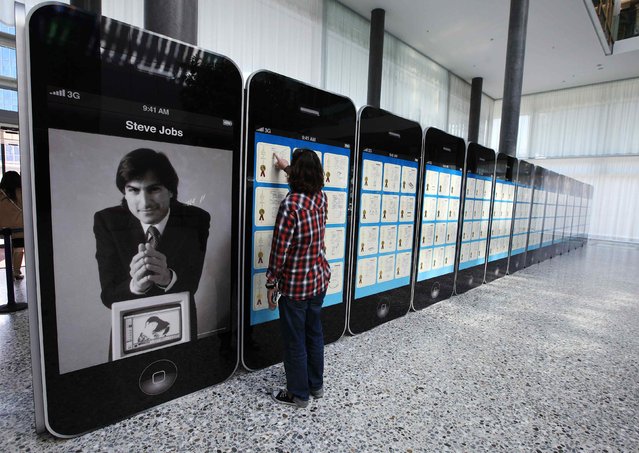 A visitor looks at Apple patents displayed at the World Intellectual Property Organization headquarters in Geneva, in this file photo taken March 29, 2012. A U.S. jury on Friday ordered Apple Inc to pay the University of Wisconsin-Madison's patent licensing arm more than $234 million in damages for incorporating its microchip technology into some of the company's iPhones and iPads without permission. (Photo by Denis Balibouse/Reuters) 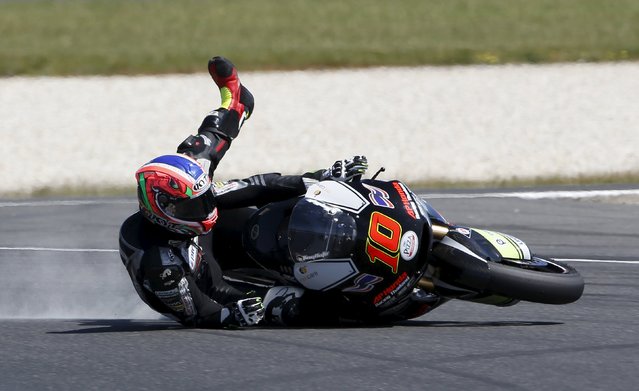 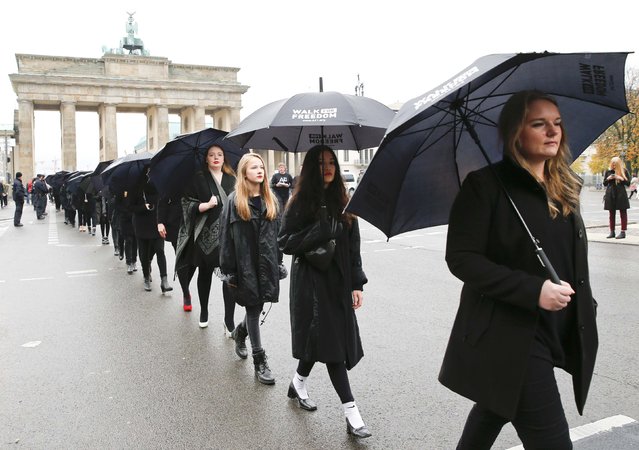 Activists take part in a 'Walk for Freedom' to protest against human trafficking, in front of the Brandenburg Gate in Berlin, Germany, October 17, 2015. (Photo by Fabrizio Bensch/Reuters) 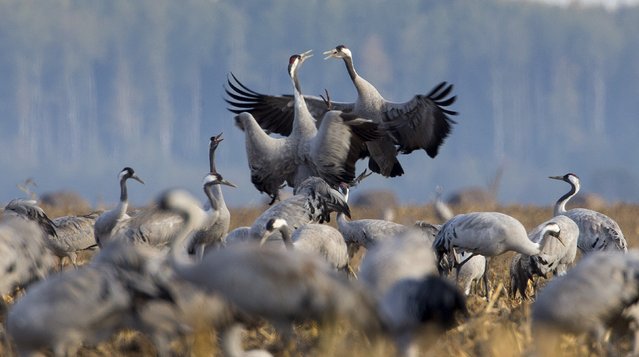 Cranes are seen in a field near the village of Navaselle, north of Minsk, in the remote corner of Belarus, October 15, 2015. Thousands of migrating cranes, which in Belarus are listed as endangered, stop at corn fields not far Yelnya marsh, one of the largest in Europe, to replenish energy reserves before flying south, according to local ornithologists. (Photo by Vasily Fedosenko/Reuters) 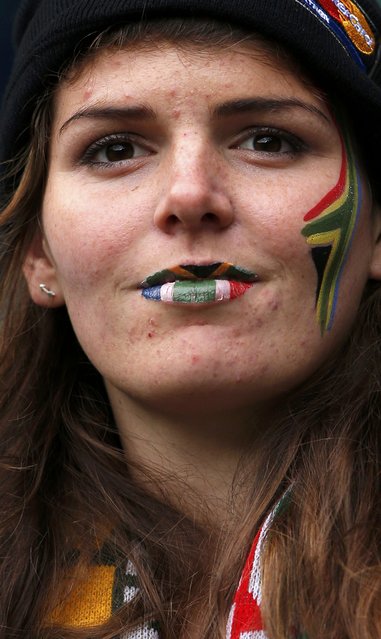 A supporter of South Africa looks on before the Rugby World Cup quarter-final against Wales at Twickenham in London, United Kingdom October 17, 2015. (Photo by Andrew Couldridge/Reuters) 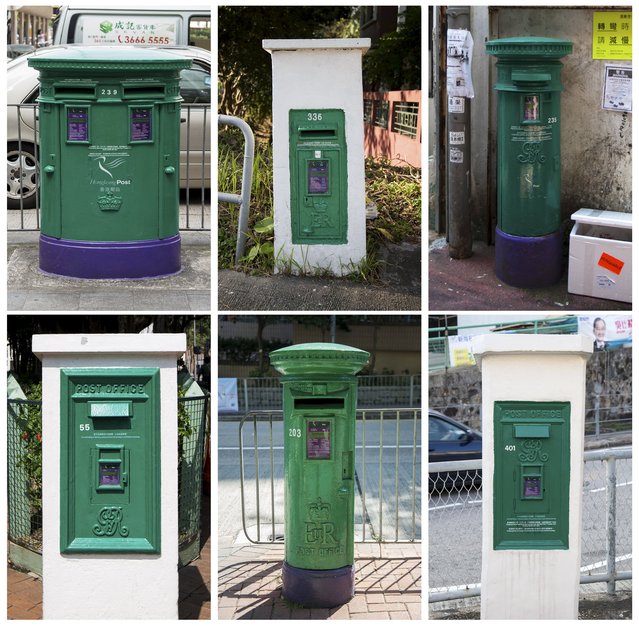 A combination photo of mail boxes from the British colonial era, which bear royal insignias, in Hong Kong, China, taken between October 15 and 17, 2015. Hongkong Post has decided to cover up the royal insignia on existing post boxes from Hong Kong’s colonial years, before the territory reverted to Chinese sovereignty in 1997, saying that the crown logo was considered “inappropriate”. Conservationists said the plan to cover up the royal cyphers on 59 post boxes was the latest government attack on the city’s heritage and identity, local media reported. (Photo by Tyrone Siu/Reuters) 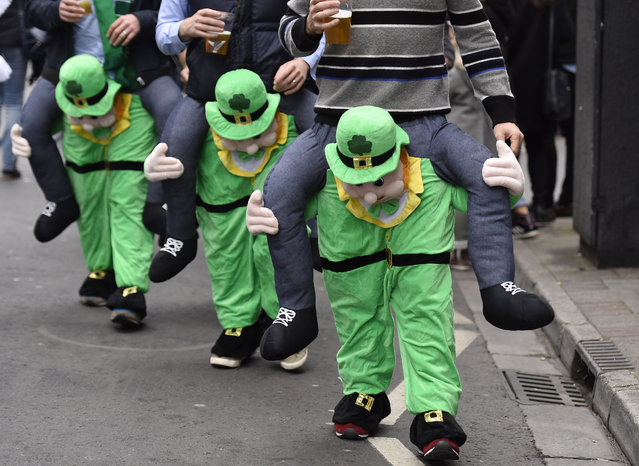 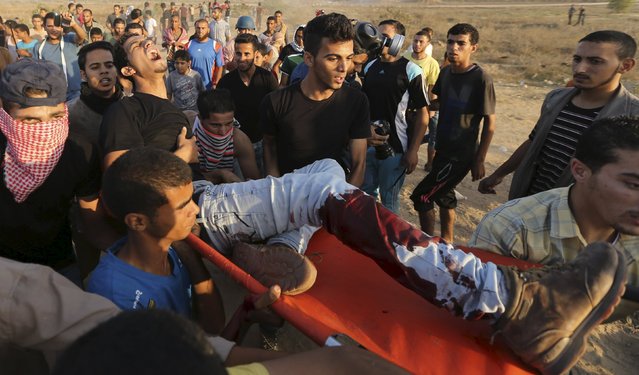 A wounded Palestinian protester is evacuated after he was shot by Israeli troops near the border between Israel and Central Gaza Strip October 17, 2015. At least 40 Palestinians and seven Israelis have died in more than two weeks of unrest, which was in part triggered by Palestinians' anger over what they see as increased Jewish encroachment on Jerusalem's al-Aqsa mosque compound. (Photo by Ibraheem Abu Mustafa/Reuters) 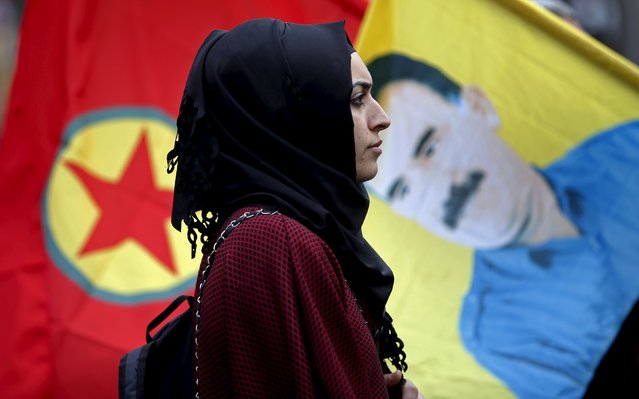 A demonstrator stands between a flag with a picture of Kurdish jailed leader Abdullah Ocalan and a flag of the Kurdistan Workers' Party (PKK) during a march to commemorate the victims of last Saturday's double suicide bombings targeting an Ankara rally of pro-Kurdish activists and civic groups, in Marseille, France, October 17, 2015. (Photo by Jean-Paul Pelissier/Reuters) 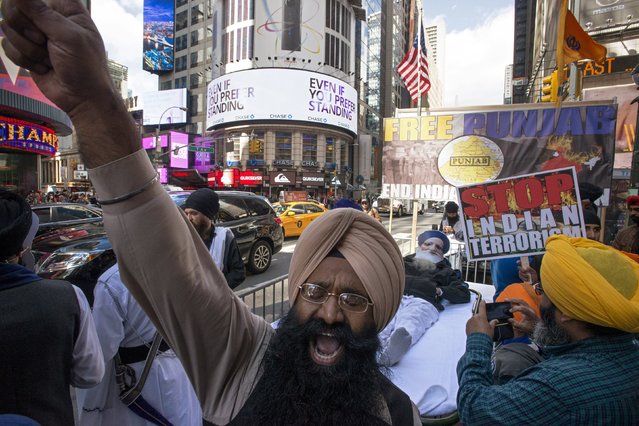 A protester chants slogans during the "Freedom Rally" held to bring international attention to what the demonstrators say is the imprisonment of 80 Sikh political prisoners in India, at Times Square, New York, October 17, 2015. The rally, which was organized by Sikhs For Justice and several other Sikh human rights groups, also aims to bring attention to the health of civil rights activist Surat Singh Khalsa, a California resident who has been reported to be on hunger strike in India since January in protest against the Sikhs' imprisonment. (Photo by Darren Ornitz/Reuters) 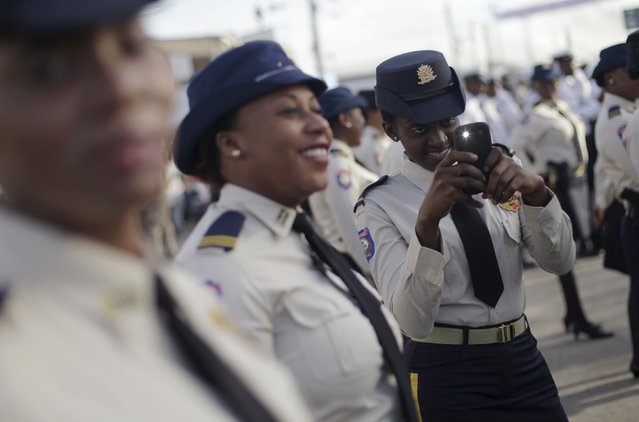 A national police officer takes a picture before the commemoration of the 209th anniversary of the killing of Jean-Jacques Dessalines in Port-au-Prince, Haiti, October 17, 2015. Dessalines was a leader of the Haitian Revolution against France and is considered a national hero. (Photo by Andres Martinez Casares/Reuters) 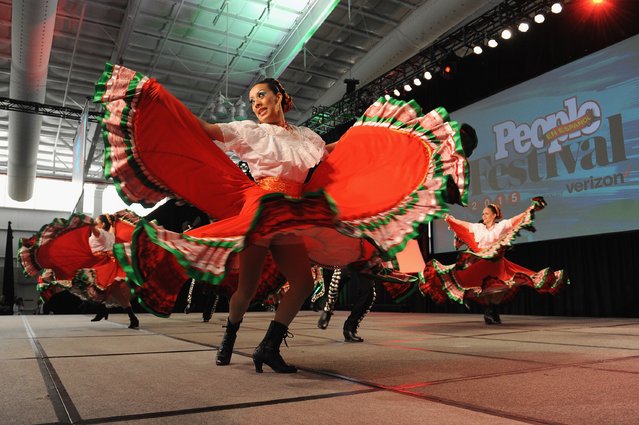 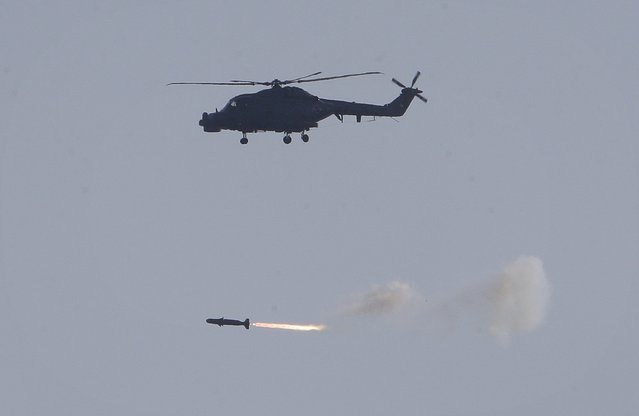 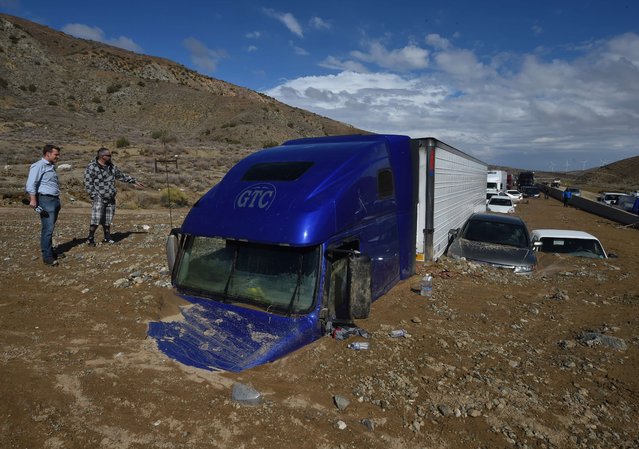 Reporters look vehicles stuck on a road after being trapped by a mudslide on California Highway 58 in Mojave, California on October 16, 2015, after torrential rains swamped the area and forced drivers and passengers to flee on foot. 75 tractor-trailers and two tour buses were among the 115 vehicles caught up in the disaster. (Photo by Mark Ralston/AFP Photo)
Edit Del
19 Oct 2015 08:08:00, post received 0 comments
Publication archive:
←   →
Popular tags:
All tags
Last searches: