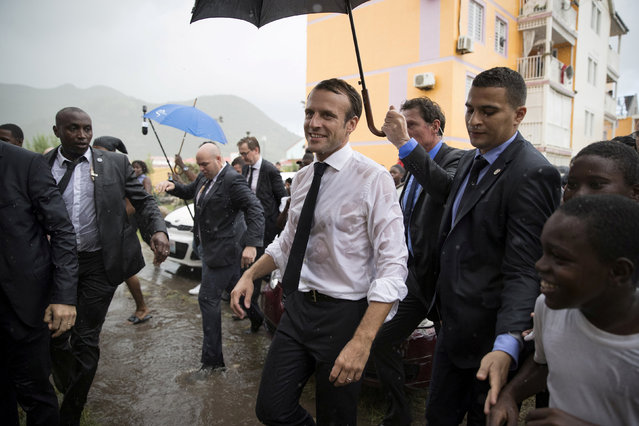 French President Emmanuel Macron visits Quartier d'Orleans, during a trip in the French West Indies, one year after Hurricanes Irma and Maria damaged the French Caribbean island of Saint-Martin September 29, 2018. (Photo by Thomas Samson/Pool via Reuters) 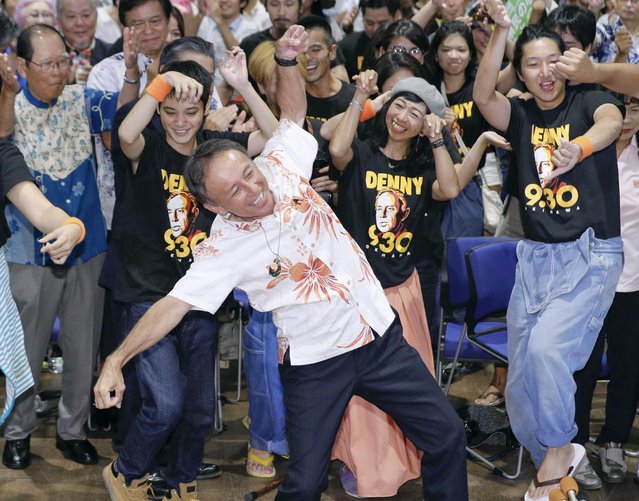 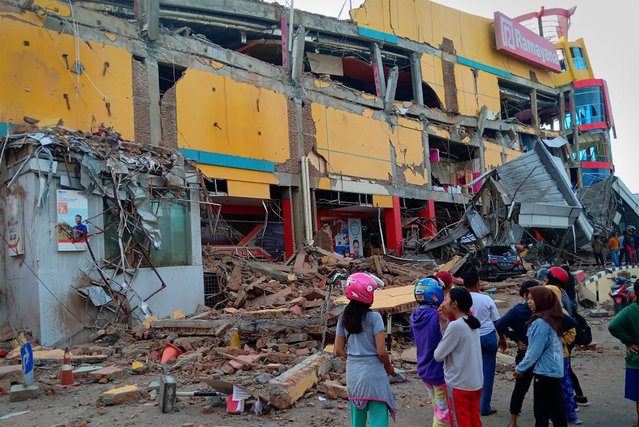 Residents stand in front of a damaged shopping mall after an earthquake hit Palu, Sulawesi Island, Indonesia on September 29, 2018. (Photo by Rolex Malaha/Antara Foto via Reuters) 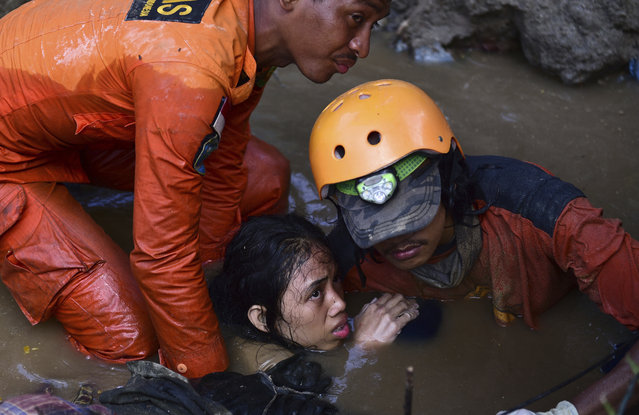 Rescuers evacuate an earthquake survivor by a damaged house following earthquakes and tsunami in Palu, Central Sulawesi, Indonesia, Sunday, September 30, 2018. Rescuers were scrambling Sunday to try to find trapped victims in collapsed buildings where voices could be heard screaming for help after a massive earthquake in Indonesia spawned a deadly tsunami two days ago. (Photo by Arimacs Wilander/AP Photo) 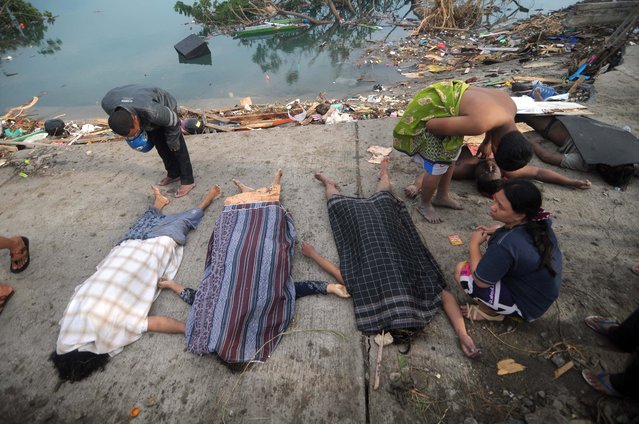 Indonesian survivors check the body of earthquake and tsunami victims as they look for their relatives at a police hospital in Palu, Central Sulawesi, Indonesia, 29 September 2018. According to reports, at least 384 people have died as a result of a series of powerful earthquakes that hit central Sulawesi and triggered a tsunami. (Photo by Olagondronk/EPA/EFE/Rex Features/Shutterstock) 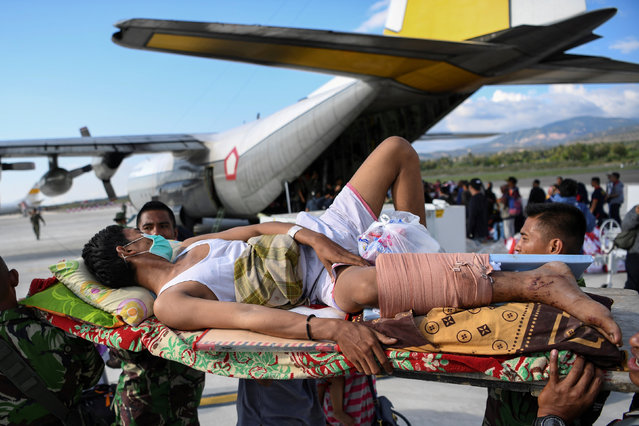 An injured man is evacuated on a military aircraft following an earthquake and tsunami at Mutiara Sis Al Jufri Airport in Palu, Central Sulawesi, Indonesia September 30, 2018 in this photo taken by Antara Foto. (Photo by Hafidz Mubarak A./Reuters/Antara Foto) 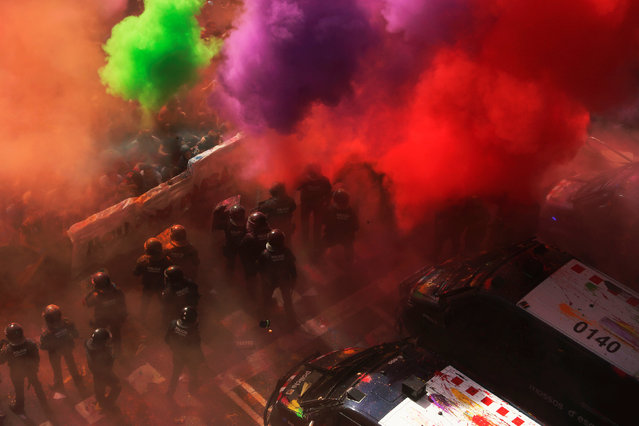 Separatist protesters throw coloured powder towards Mossos d'Esquadra police officers as they protest against a demonstration in support of the Spanish police units who took part in the operation to prevent an independence referendum in Catalonia on October 1, 2017, in Barcelona, Spain, September 29, 2018. (Photo by Jon Nazca/Reuters) 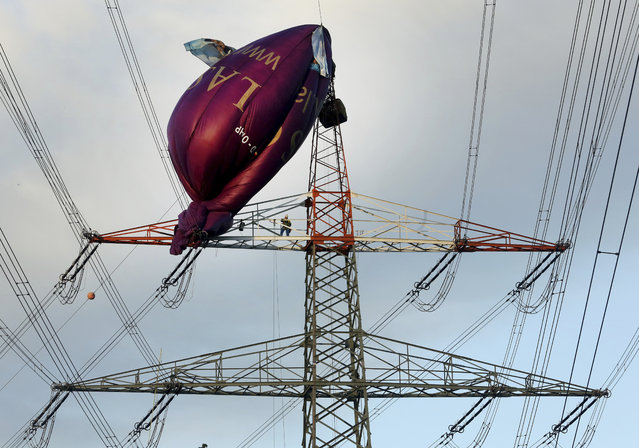 A hot air balloon sits on top of a high-voltage power line in Bottrop, Monday, October 1, 2018 after it collided the evening before. Six passengers were rescued from a height of 65 meters (210 feet). (Photo by Roland Weihrauch/DPA via AP Photo) 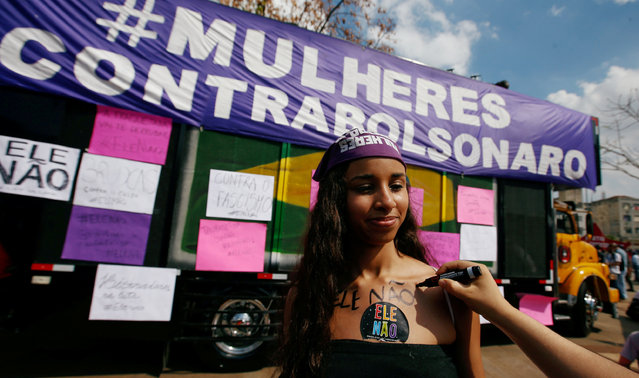 A woman gets a “#NotHim” painted on her chest during a demonstration against Brazil's presidential candidate Jair Bolsonaro, in Sao Paulo, Brazil September 29, 2018. The banner in the back reads “#WomenagainstBolsonaro”. (Photo by Alexandre Schneider/Reuters) 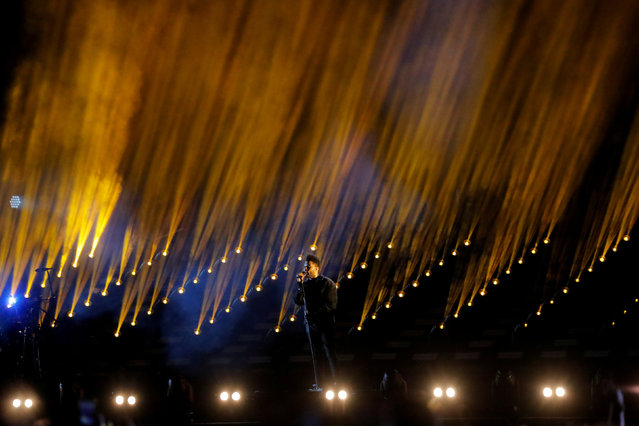 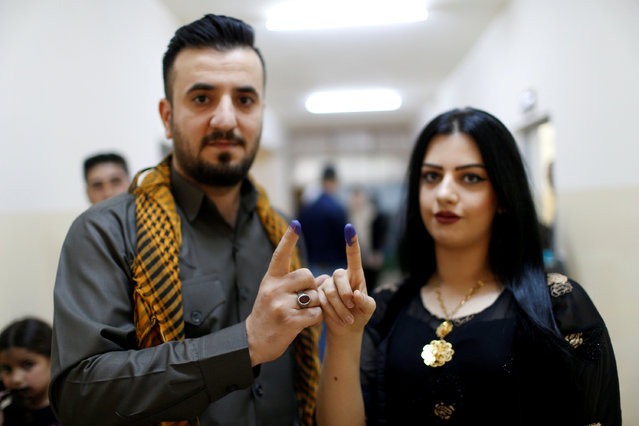 A Kurdish men and woman show their ink-stained fingers, during parliamentary elections in the semi-autonomous region in Erbil, Iraq September 30, 2018. (Photo by Thaier Al-Sudani/Reuters) 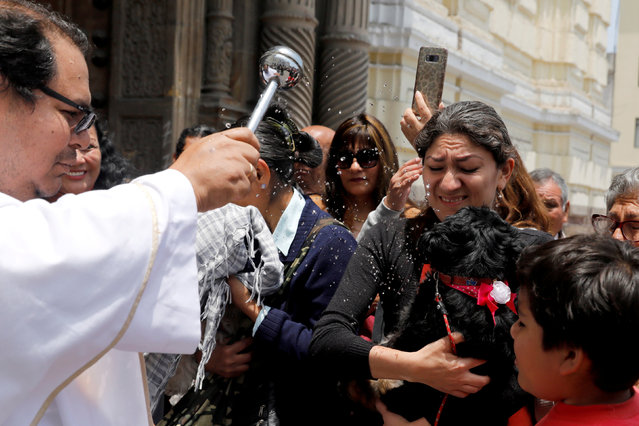 Pet owners attend a religious and blessing ceremony to honour the feast of Saint Francis of Assisi outside the San Francisco Church in Lima, Peru September 30, 2018. (Photo by Guadalupe Pardo/Reuters) 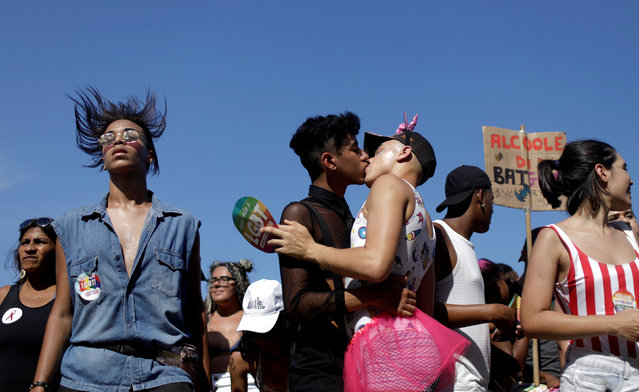 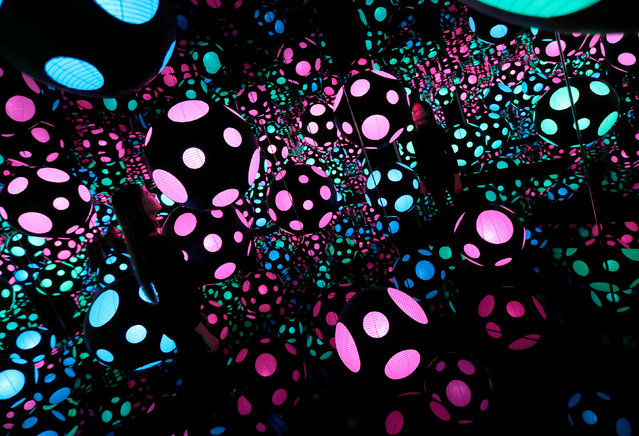 A Victoria Miro gallery staff member poses for a picture next to Yayoi Kusama's installation, Infinity Mirrored Room-My Heart Is Dancing Into The Universe, in London, Britain, September 28, 2018. (Photo by Peter Nicholls/Reuters) 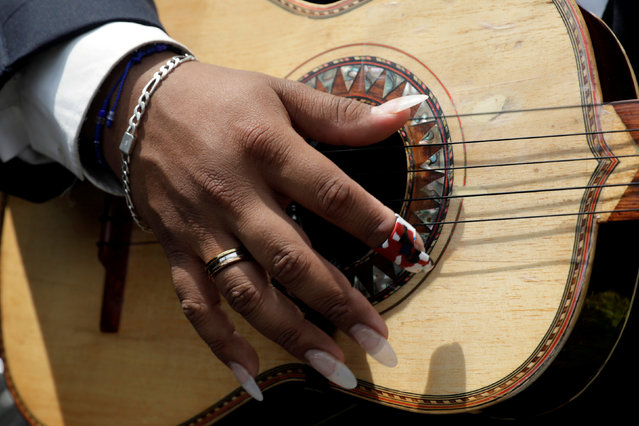 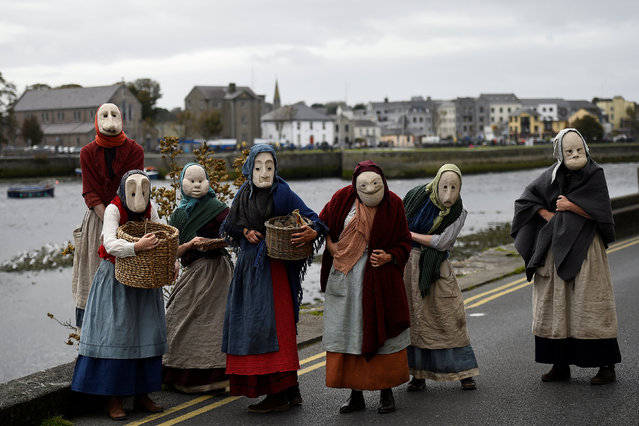 Actors participate in a street performance called “The Fisherwives”, by Bru Theatre group, representing part of the fishing community from 100 years ago, at the Spanish Arch in Galway, Ireland September 30, 2018. (Photo by Clodagh Kilcoyne/Reuters) 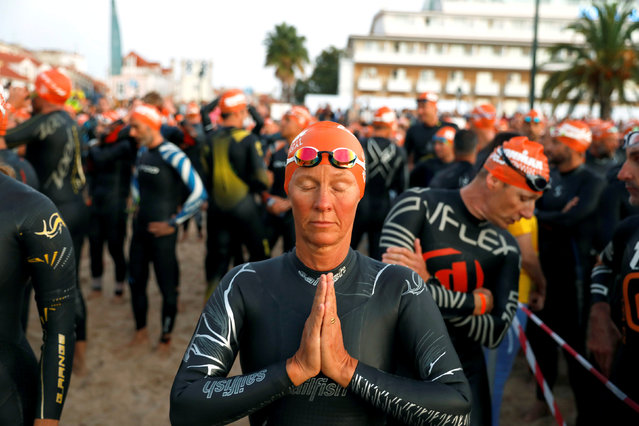 Athletes warm up before they participate in Ironman 70.3 race in Cascais, Portugal September 30, 2018. (Photo by Rafael Marchante/Reuters) 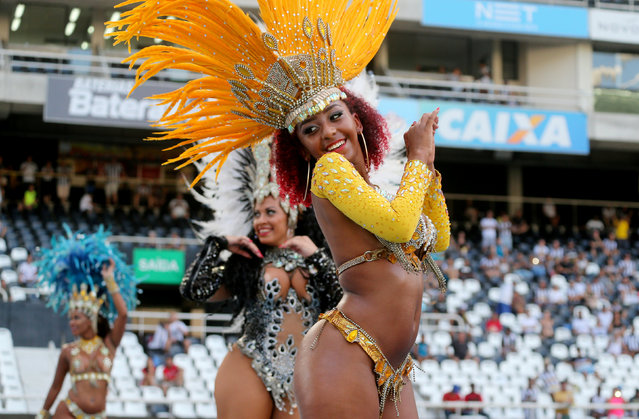 Dancers before the match between Botafogo and Sao Paulo as part of Brasileirao Series A 2018 at Engenhao Stadium on September 30, 2018 in Rio de Janeiro, Brazil. (Photo by Sergio Moraes/Reuters) 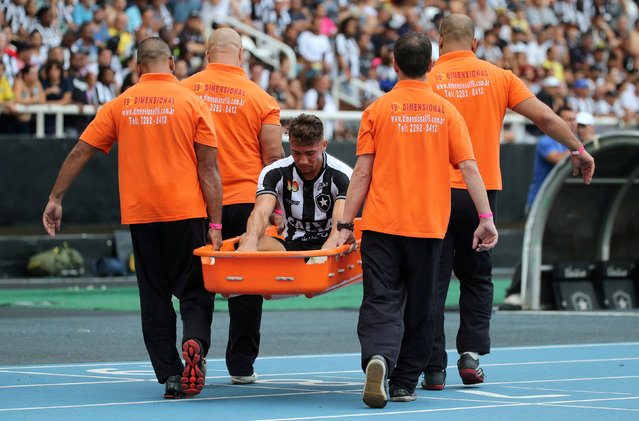 Jean of Botafogo is stretchered off after sustaining an injury during the match between Botafogo and Sao Paulo as part of Brasileirao Series A 2018 at Engenhao Stadium on September 30, 2018 in Rio de Janeiro, Brazil. (Photo by Sergio Moraes/Reuters) 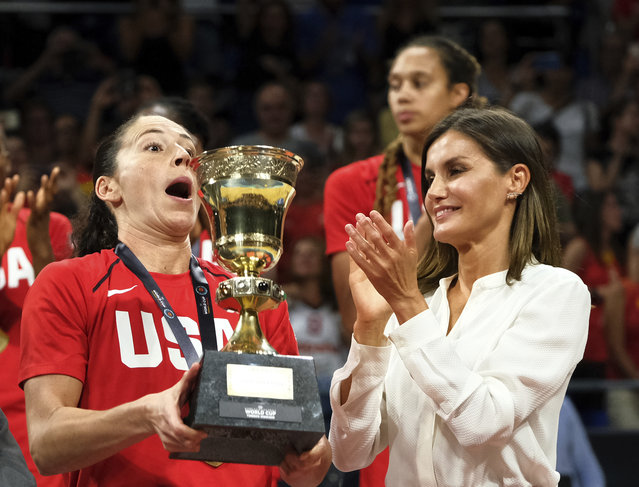 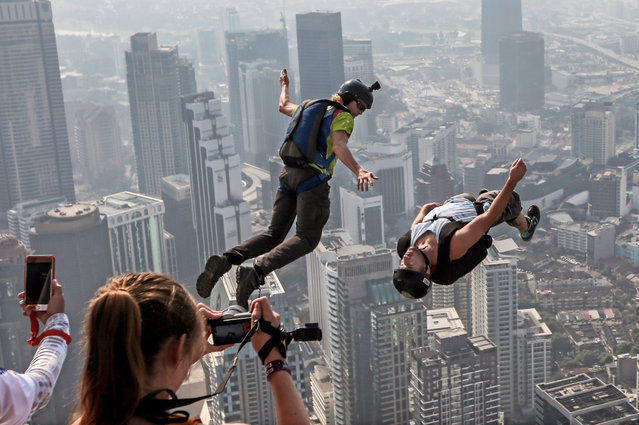 BASE jumpers jump from a 300m high deck during the Kuala Lumpur Tower International Jump in Kuala Lumpur, Malaysia, 30 September 2018. More than 140 BASE (Building, Antenna, Span and Earth) jumpers took part in this extreme sport event. (Photo by Ahmad Yusni/EPA/EFE) 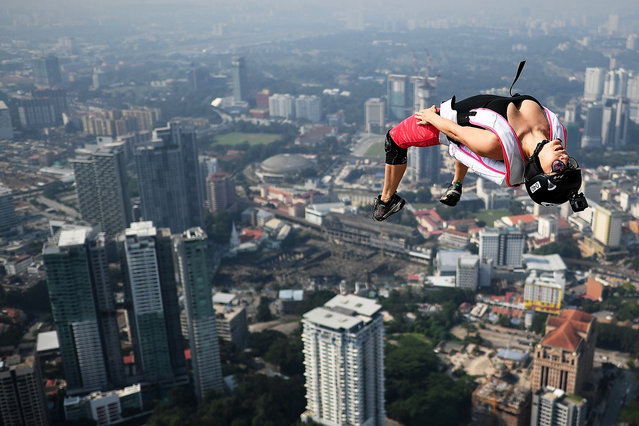 Base jumpers leap from the 300-metre high skydeck of Malaysia's landmark Kuala Lumpur Tower against the backdrop of the city's skyline in Kuala Lumpur on September 30, 2018 during the annual International KL Tower Base-Jump event. (Photo by Manan Vatsyayana/AFP Photo) 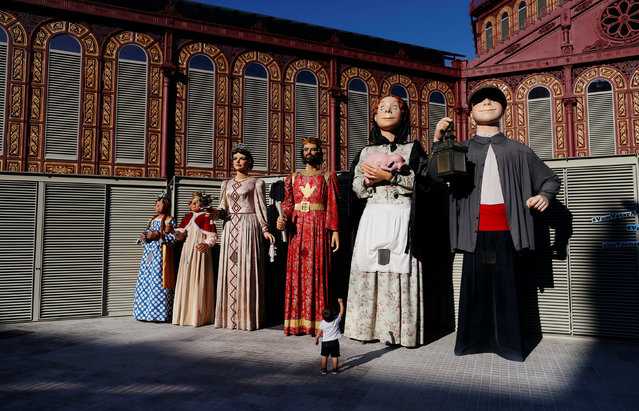 A child gestures next to Catalan traditional giants as he takes part in the activities of the Sant Antoni neighborhood to commemorate the first anniversary of the banned independence referendum in the region on October 1, 2017, in Barcelona, Spain September 30, 2018. (Photo by Jon Nazca/Reuters) 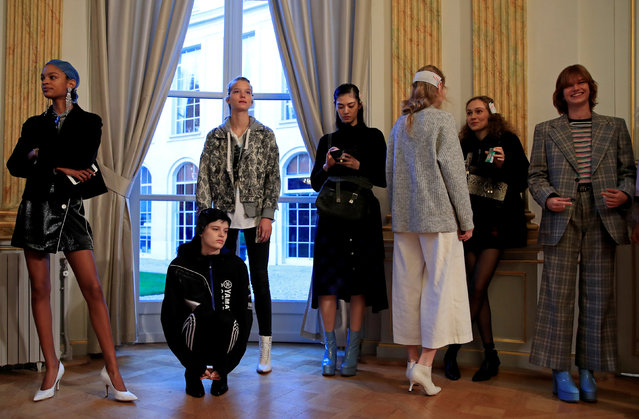 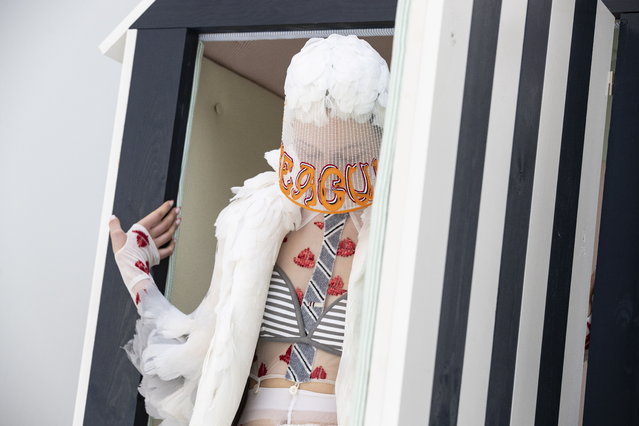 A model repeats during a rehearsal prior to the Spring/Summer 2019 Women's collections by US designer Thom Browne during the Paris Fashion Week, in Paris, France, 30 September 2018. (Photo by Etienne Laurent/EPA/EFE) 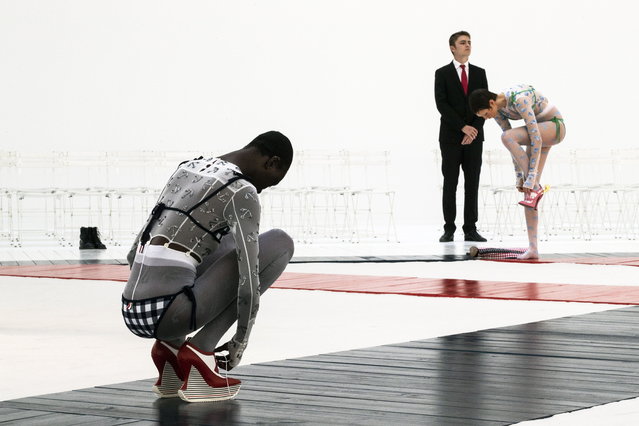 Models repeat during a rehearsal prior to the Spring/Summer 2019 Women's collections by US designer Thom Browne during the Paris Fashion Week, in Paris, France, 30 September 2018. The presentation of the Women's collections runs from 24 September to 02 October. (Photo by Etienne Laurent/EPA/EFE)
Edit Del
01 Oct 2018 13:02:00, post received 0 comments
Publication archive:
←   →
Popular tags:
All tags
Last searches: