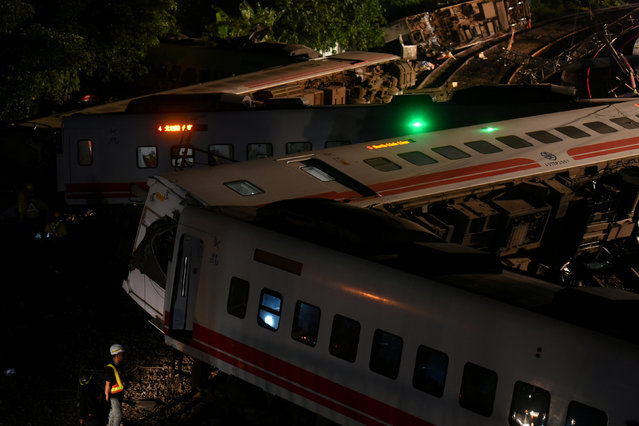 Workers walk around derailed train as they prepare to clear the accident site, in Yilan, Taiwan October 22, 2018. At least 22 people have died after an express train derailed and flipped over on a popular coastal tourist route in Taiwan on October 21, the island' s worst rail accident for more than 20 years. Taiwan' s railways administration confirmed 22 people had been killed and said 171 people had been injured, 10 seriously, in the accident in northeastern Yilan county. (Photo by Lee Kun Han/Reuters) 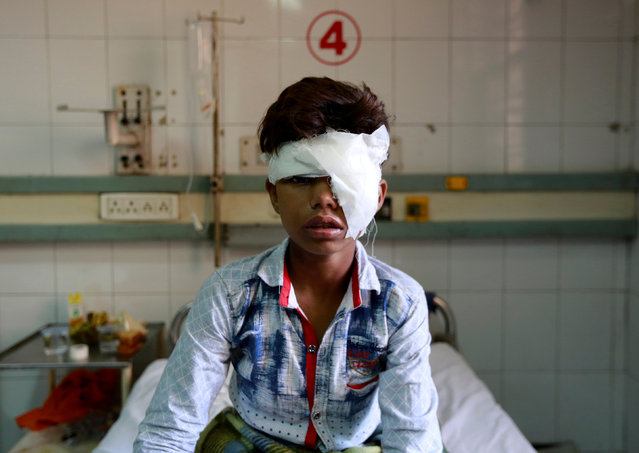 A boy who was was injured after a commuter train traveling at high speed ran through a crowd of people on the rail tracks on Friday, sits in a hospital bed in Amritsar, India, October 20, 2018. (Photo by Adnan Abidi/Reuters) 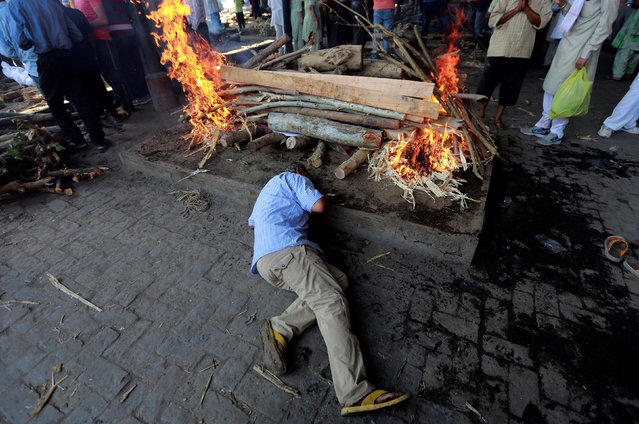 A man cries next to the burning pyre of a family member who died after a commuter train traveling at high speed ran through a crowd of people on the rail tracks on Friday, at a cremation ground in Amritsar, India, October 20, 2018. (Photo by Adnan Abidi/Reuters) 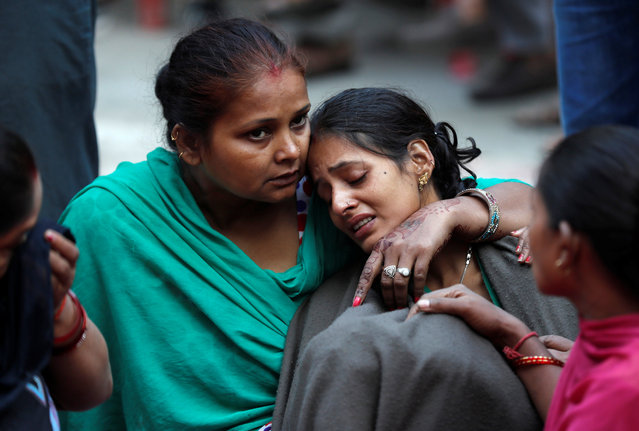 A woman is consoled as she mourns the death of a relative after a commuter train traveling at high speed ran through a crowd of people on the rail tracks on Friday, outside a hospital in Amritsar, India, October 20, 2018. (Photo by Adnan Abidi/Reuters) 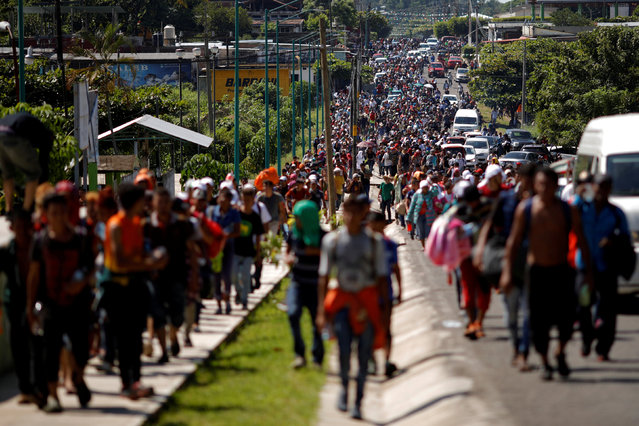 Central American migrants walk along the highway near the border with Guatemala, as they continue their journey trying to reach the U.S., in Tapachula, Mexico October 21, 2018. (Photo by Ueslei Marcelino/Reuters) 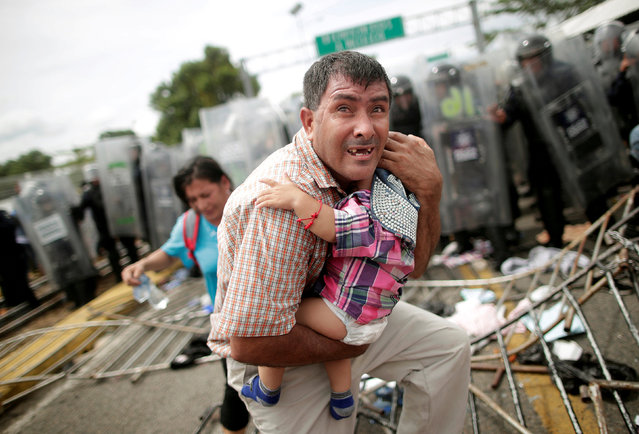 A Honduran migrant protects his child after fellow migrants, part of a caravan trying to reach the U.S., stormed a border checkpoint in Guatemala, in Ciudad Hidalgo, Mexico October 19, 2018. (Photo by Ueslei Marcelino/Reuters) 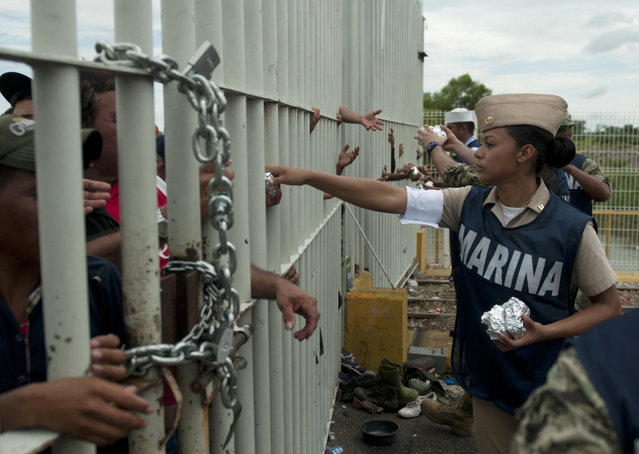 Mexican navy personnel hand out food to Central American migrants stuck in no man's land on the bridge over the Suchiate River that is the border between Guatemala and Mexico, near Ciudad Hidalgo, Mexico, Saturday, October 20, 2018. The entry into Mexico via the bridge has been closed. The migrants have moved about 30 feet back from the gate that separates them from Mexican police to establish a buffer zone. About 1,000 migrants now remain on the bridge between Guatemala and Mexico. (Photo by Oliver de Ros/AP Photo) 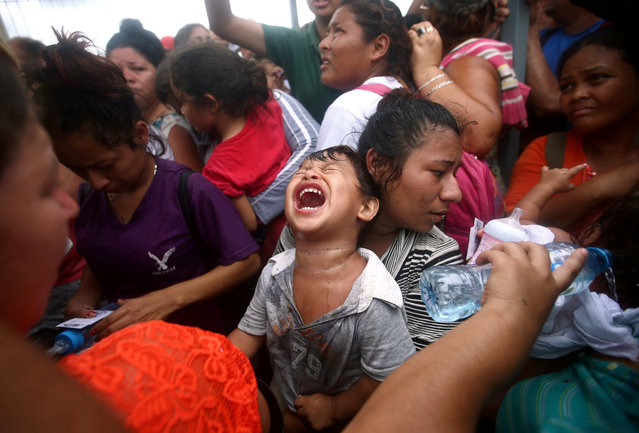 A Central American migrant, part of a caravan trying to reach the U.S., reacts as he waits to apply for asylum in Mexico at a checkpoint in Ciudad Hidalgo, Mexico, October 20, 2018. (Photo by Edgard Garrido/Reuters) 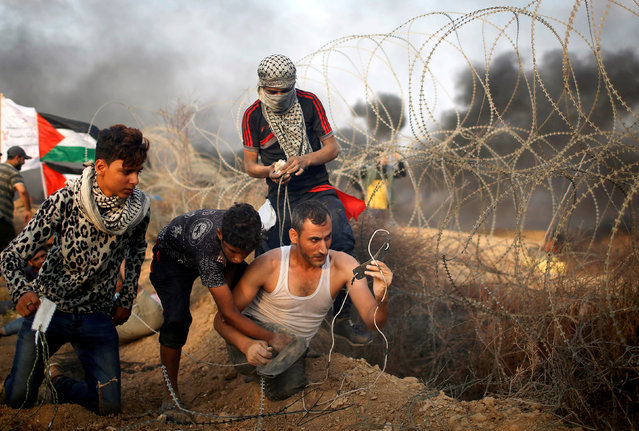 A disabled Palestinian is helped as he uses a sling to hurl stones at Israeli troops during a protest calling for lifting the Israeli blockade on Gaza and demanding the right to return to their homeland, at the Israel-Gaza border fence in Gaza October 19, 2018. (Photo by Mohammed Salem/Reuters) 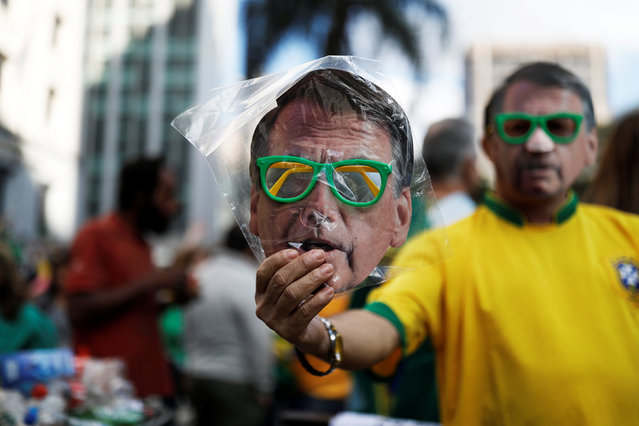 A street vendor sells a mask of Jair Bolsonaro, far-right lawmaker and presidential candidate of the Social Liberal Party (PSL), in a demonstration in Sao Paulo, Brazil, October 21, 2018. (Photo by Nacho Doce/Reuters) 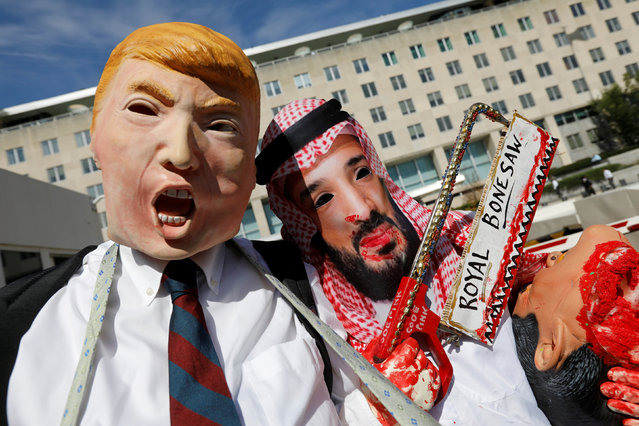 Activists from the group “code Pink” dressed as U.S. President Donald Trump and Saudi Crown Prince Mohammad bin Salman participate in a demonstration calling for sanctions against Saudi Arabia and against the disappearance of Saudi journalist Jamal Khashoggi in front of the U.S. State Department in Washington, U.S., October 19, 2018. (Photo by Kevin Lamarque/Reuters) 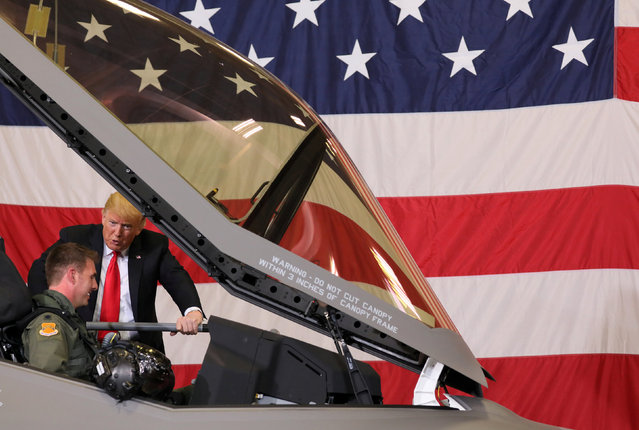 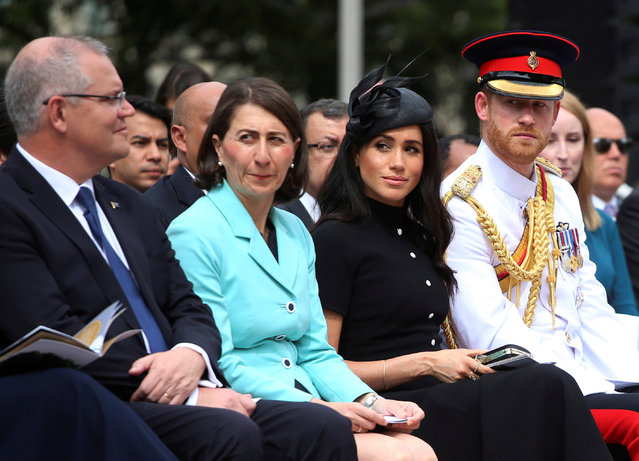 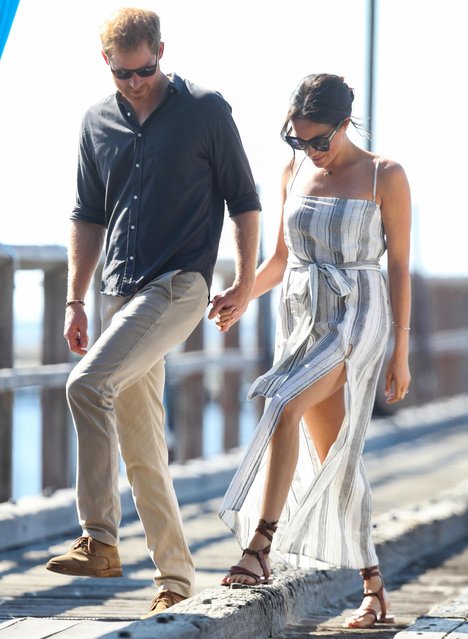 Prince Harry, Duke of Sussex and Meghan, Duchess of Sussex walk along the picturesque Kingfisher Bay Jetty on October 22, 2018 in Fraser Island, Australia. The Duke and Duchess of Sussex are on their official 16-day Autumn tour visiting cities in Australia, Fiji, Tonga and New Zealand (Photo by Chris Jackson/Getty Images) 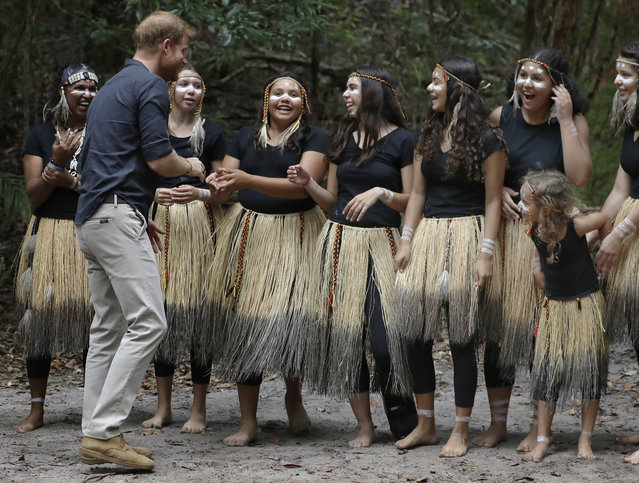 Britain's Prince Harry meets local dancers after the unveiling of the Queens Commonwealth Canopy at Pile Valley, K'gari during a visit to Fraser Island, Australia, Monday, October 22, 2018. Prince Harry and his wife Meghan are on day seven of their 16-day tour of Australia and the South Pacific. (Photo by Kirsty Wigglesworth/AP Photo) 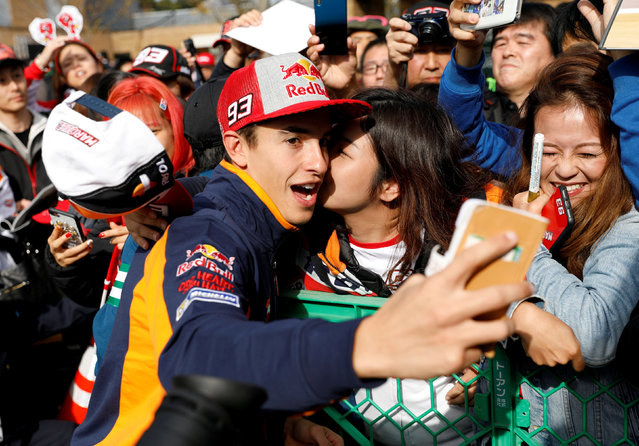 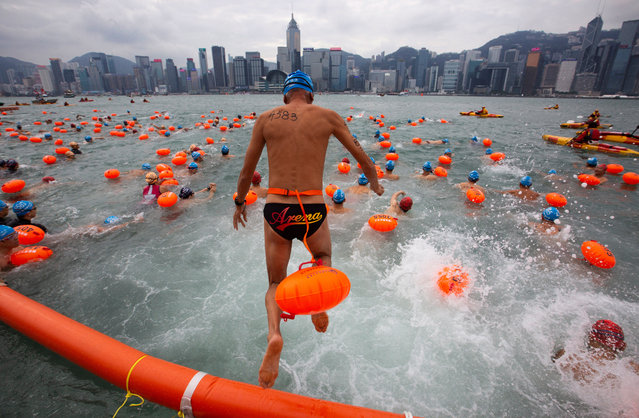 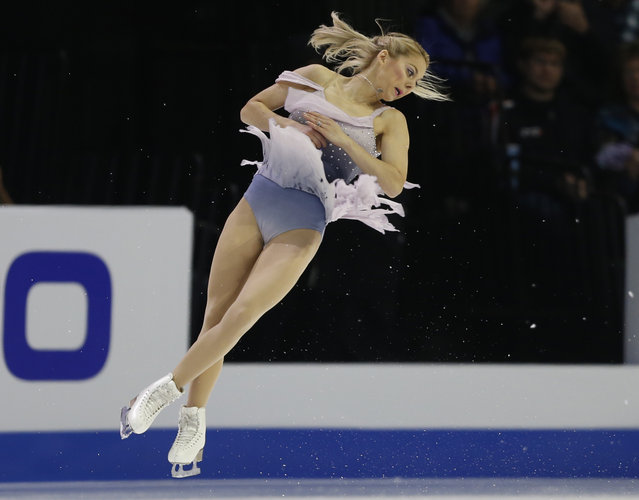 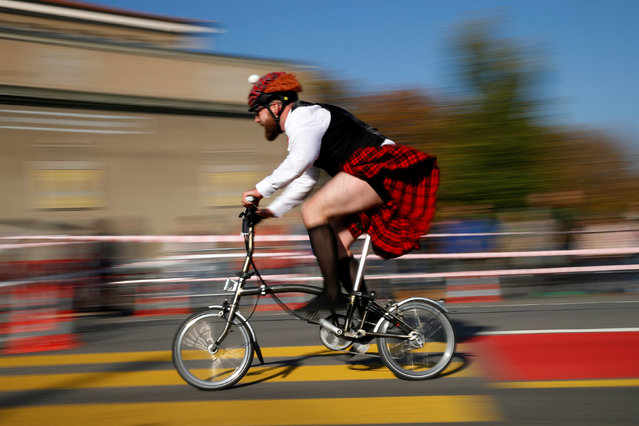 A participant races in the Brompton World Championship in Bern, Switzerland October 21, 2018. (Photo by Stefan Wermuth/Reuters) 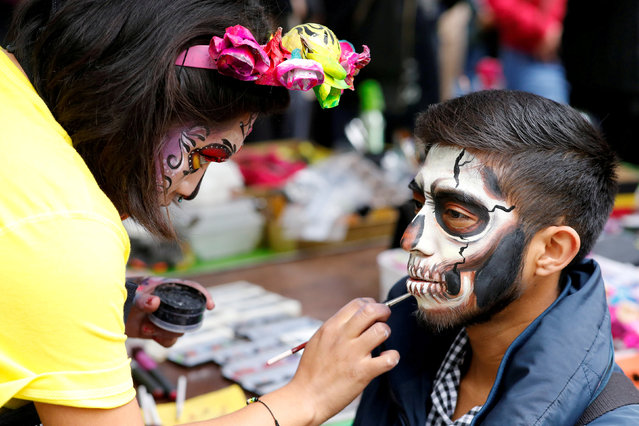 A man has his face painted as “Catrina”, a Mexican character also known as “The Elegant Death”, as he takes part in a Catrina parade ahead of the Day of the Dead in Mexico City, Mexico, October 21, 2018. (Photo by Andres Stapff/Reuters) 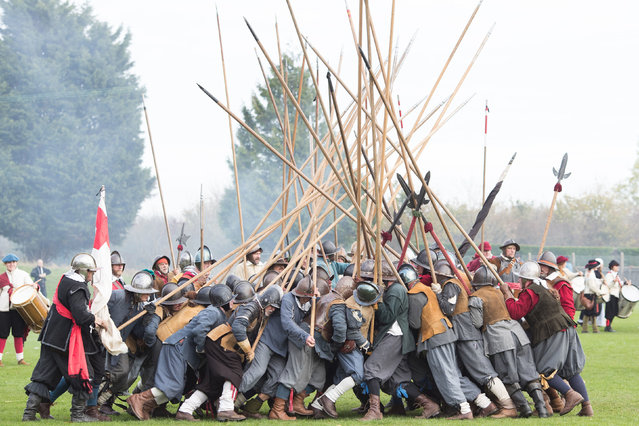 Members of the Sealed Knot re-enactment society take part in a commemoration of the Battle of Edgehill, the first major engagement of the English Civil War, which was fought on October 23, 1642, at Radway, Warwickshire on Saturday, October 20, 2018. (Photo by Aaron Chown/PA Wire) 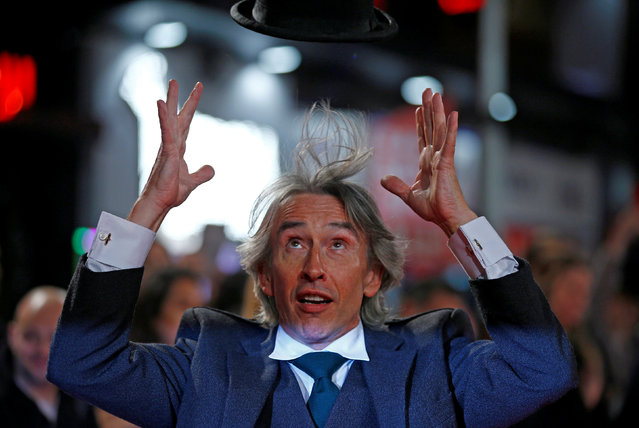 Actor Steve Coogan arrives at the world premiere of “Stan and Ollie” during the London Film Festival, in London, Britain October 21, 2018. (Photo by Henry Nicholls/Reuters) 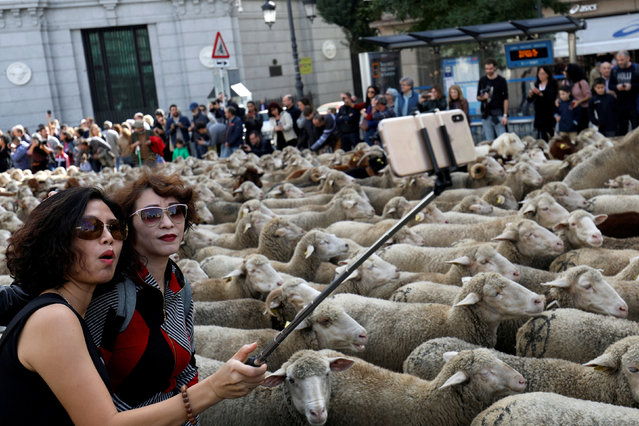 Women take a selfie next to a flock of sheep during the annual sheep parade through Madrid, Spain, October 21, 2018. Shepherds parade the sheep through the city every year in order to exercise their right to use traditional routes to migrate their livestock from northern Spain to winter grazing pasture land in southern Spain. (Photo by Susana Vera/Reuters)
Edit Del
22 Oct 2018 09:40:00, post received 0 comments
Publication archive:
←   →
Popular tags:
All tags
Last searches: