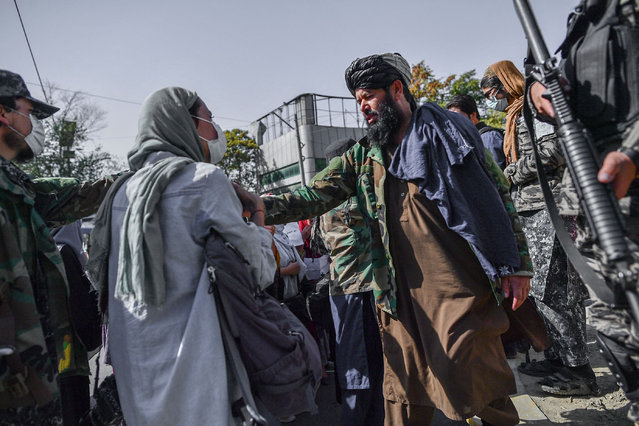 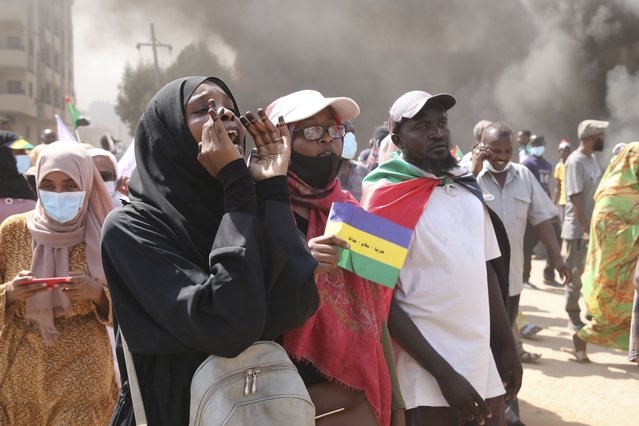 Sudanese demonstrators take to the streets of the capital Khartoum to demand the government's transition to civilian rule in Khartoum, Sudan, Thursday, October 21, 2021. The relationship between military generals and Sudanese pro-democracy groups has deteriorated in recent weeks over the country's future. (Photo by Marwan Ali/AP Photo) 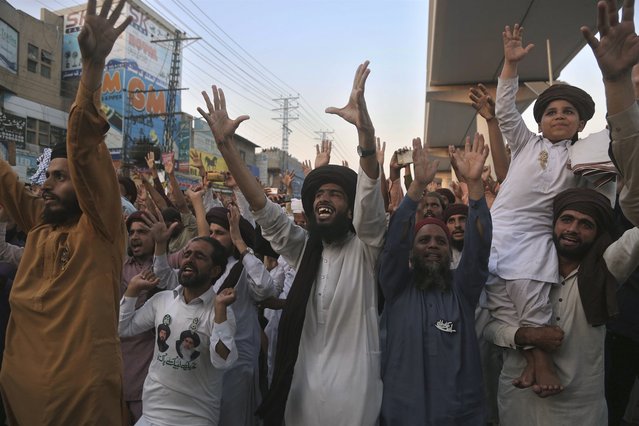 Supporters of Tehreek-e-Labaik Pakistan, a radical Islamist political party, chant religious slogans during a sit-in protest demanding the release of their leader, in Lahore, Pakistan, Thursday, October 21, 2021. Thousands of Islamists are protesting in the eastern city of Lahore, demanding the release of their leader Saad Rizvi, who was arrested in April amid protest against France over depictions of Islam's Prophet Muhammad. (Photo by K.M. Chaudary/AP Photo) 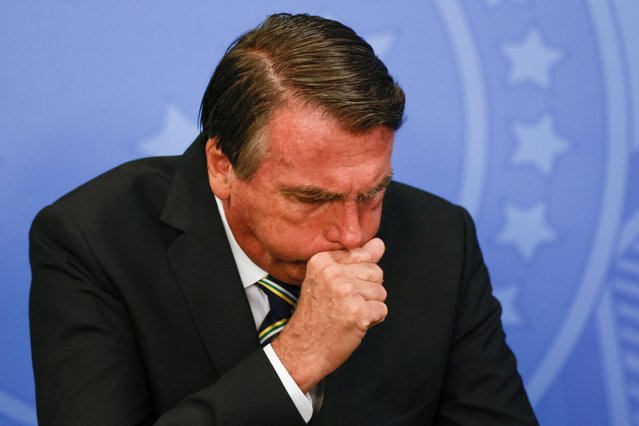 Brazil's President Jair Bolsonaro coughs during a ceremony to sanction the bill that create the Federal Regional Court, at the Planalto Palace in Brasilia, Brazil on October 20, 2021. (Photo by Ueslei Marcelino/Reuters) 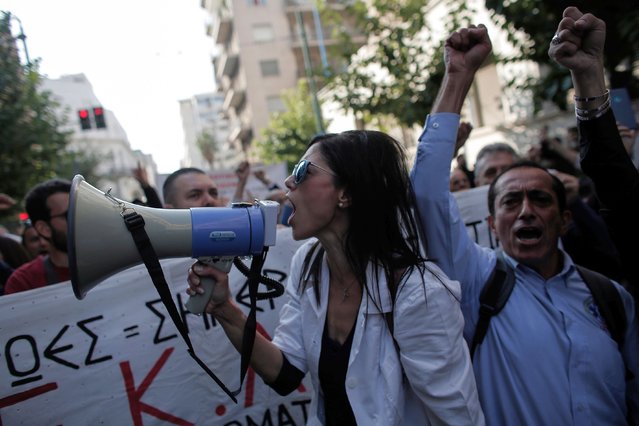 A medical worker shouts slogans, during a protest march towards the ministry of Health, by doctors and medical staff in Athens, Greece, 21 October 2021. Medical workers and doctors marched through city center towards the ministry of Health demanding the financial support of the public health system and protested over mandatory vaccinations and the indefinite suspension for those working in the health care sector that have not had at least one shot of the vaccine. (Photo by Kostas Tsironis/EPA/EFE) 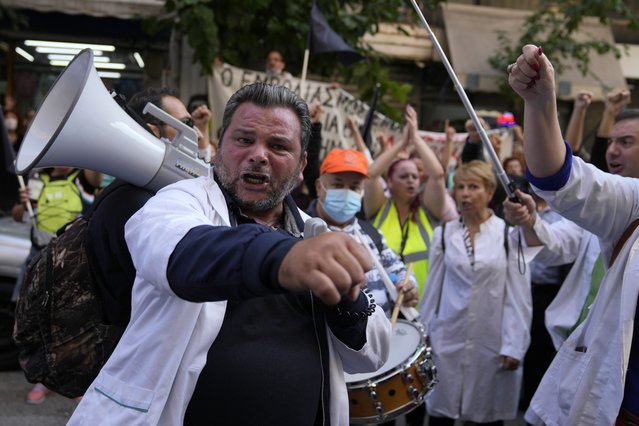 Healthcare workers shout slogans during a rally organized by their unions outside the Health Ministry in Athens, Thursday, October 21, 2021. Hundreds of Greek state hospital workers marched through central Athens as part of a 24-hour strike to protest staff shortages and compulsory coronavirus vaccinations. (Photo by Thanassis Stavrakis/AP Photo) 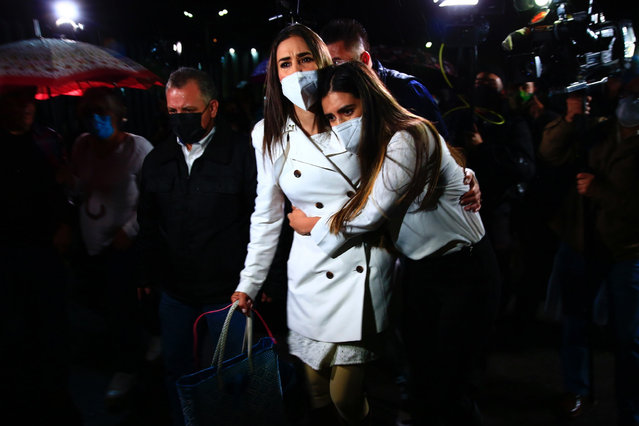 Mariana Moguel Robles (C-L) daughter of the former head of the Secretariat of Social Development (SEDESOL) Rosario Robles, cries after hearing the decision of a judge in the courts of the South Prison in Mexico City, Mexico 20 October 2021. A Mexican judge on 20 October refused to release Rosario Robles, Secretary of Development in the Government of Enrique Pena Nieto (2012-2018), in preventive detention for more than two years for the corruption case known as the Master Scam. (Photo by Carlos Ramírez/EPA/EFE) 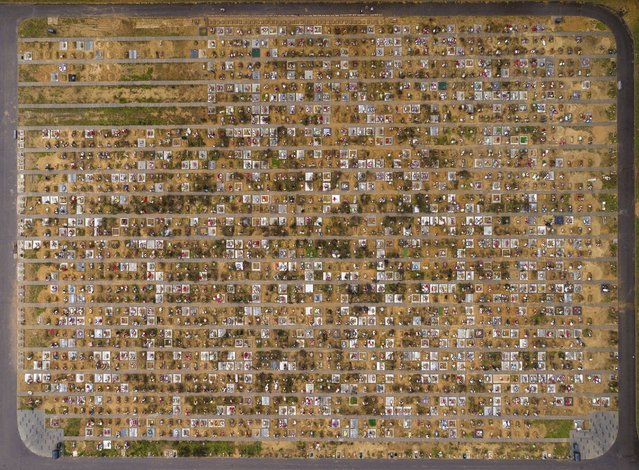 An aerial view shows fresh graves at the Yastrebkovskoe cemetery, which serves as one of the burial grounds for those who died of the coronavirus, outside in Moscow, Russia, Thursday, October 21, 2021. The government coronavirus task force reported 36,339 new confirmed infections and more than thousand deaths in the past 24 hours. That brought Russia's death toll to 227,389, by far the highest in Europe. Moscow Mayor Sergei said all restaurants, cafes and non-food stores, gyms, cinemas and other entertainment venues in the Russian capital will be shut from Oct. 28 to Nov. 7. (Photo by Dmitry Serebryakov/AP Photo) 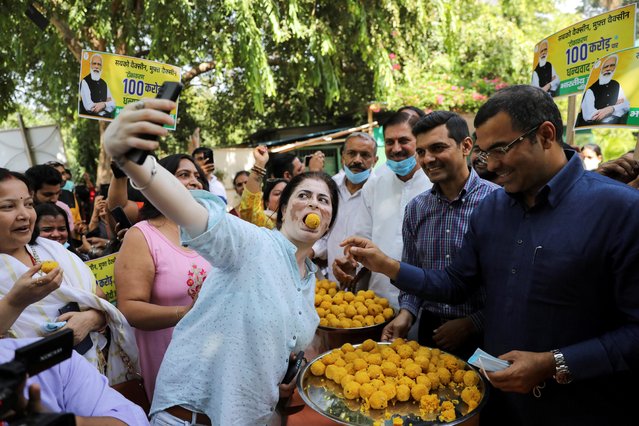 A woman takes a selfie while being fed with sweets as India celebrates the milestone of administering one billion COVID-19 vaccine doses, at an event organised by members of India's ruling Bharatiya Janata Party (BJP) in New Delhi, India, October 21, 2021. (Photo by Anushree Fadnavis/Reuters) 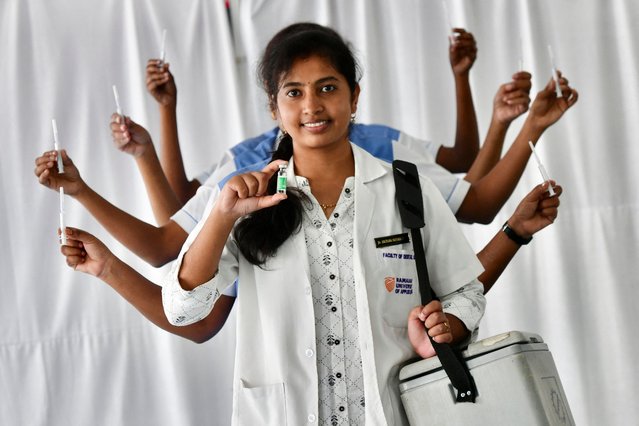 Nursing staff involved with vaccination against the Covid-19 coronavirus pose for a photograph as Goddess Durga at the Ramaiah Hospital in Bangalore on October 21, 2021, as they celebrate India administering its billionth Covid-19 vaccine dose on October 21, according to the health ministry, half a year after a devastating surge in cases brought the health system close to collapse. (Photo by Manjunath Kiran/AFP Photo) 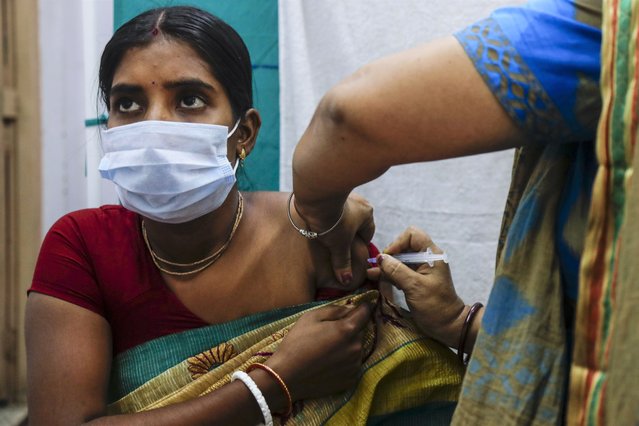 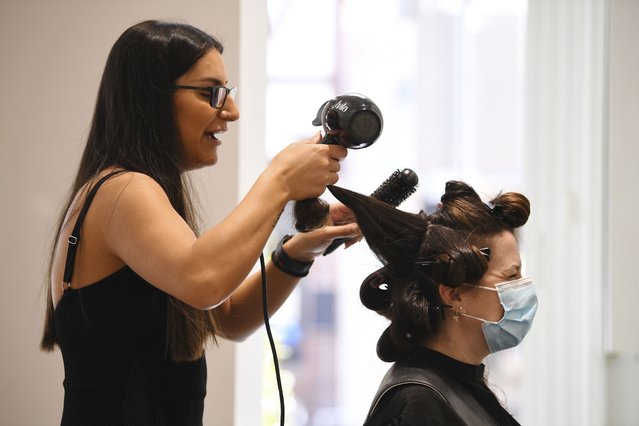 Hairdresser Caroline Shamoon of Joey Scandizzo Salon works on a client's hair in Melbourne, Friday, October 22, 2021. Melbourne, Australia’s most populous city after Sydney, came out of 77 days of lockdown on Friday after Victoria state reached a benchmark of 70% of the target population fully vaccinated. (Photo by James Ross/AAP Image via AP Photo) 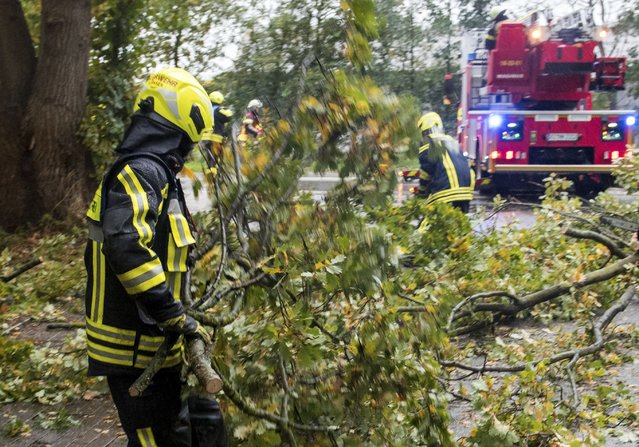 A firefighter removes fallen trees from a road in Hamburg, Germany, Thursday, October 21, 2021. Northern Germany was hit by storm and heavy rain falls. (Photo by Daniel Bockwoldt/dpa via AP Photo) 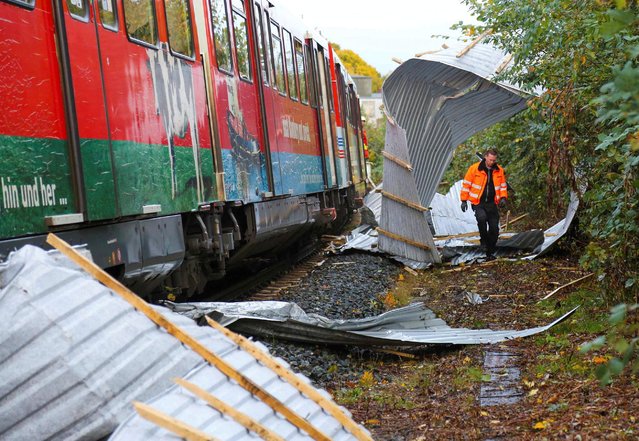 A regional train is pictured after it had to make an emergency stop due to corrugated metal panels from a nearby roof amid strong winds, in Neumuenster, northern Germany, October 21, 2021. (Photo by Thomas Nyfeler/Reuters) 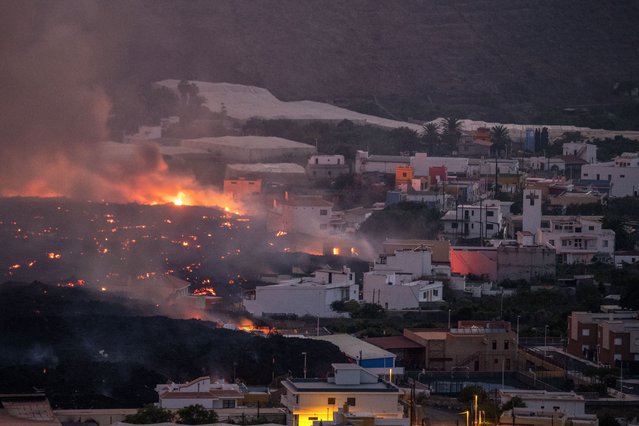 Lava flows from a volcano destroying houses at La Laguna neighbourhood on the Canary island of La Palma, Spain on Thursday October 21, 2021. A second tongue of lava is expected to reach the Atlantic today and release more toxic gases into the atmosphere, an event which will lead to the home confinement of some nearby towns. (Photo by Saul Santos/AP Photo) 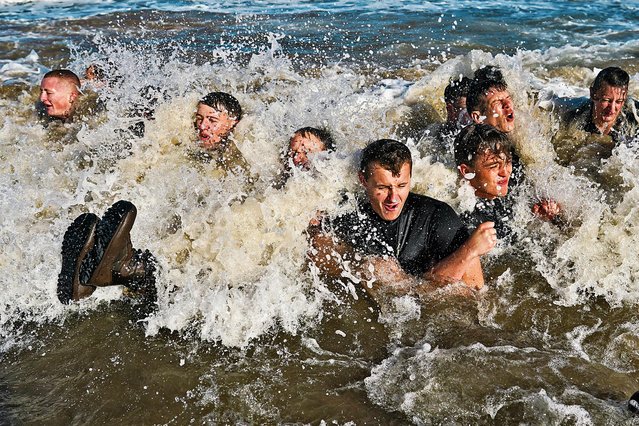 Soldiers from 4th Regiment Royal Artillery carry out exercises in the sea as they take part in a Regimental physical training session on Saltburn beach on October 21, 2021 in Saltburn-by-the-Sea, England. The 4th Regiment Royal Artillery, which traditionally recruits from across the North of England, are currently based in Topcliffe, North Yorkshire. (Photo by Ian Forsyth/Getty Images) 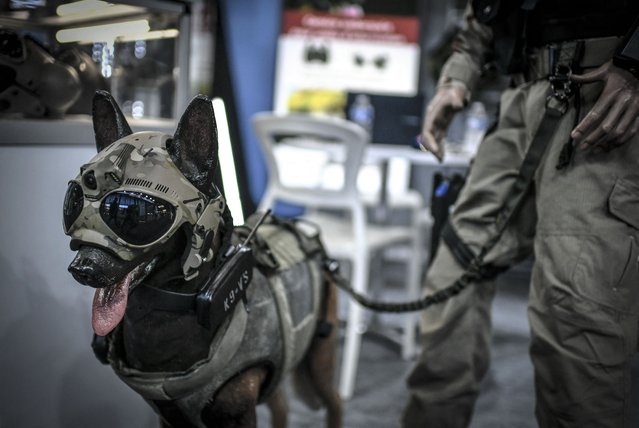 This photograph taken on October 19, 2021 shows a dummy dog wearing a mask equipped with cameras and a transmission device displayed at the 22nd worldwide exhibition of internal State security (MILIPOL) in Villepinte, north of Paris. (Photo by Stephane de Sakutin/AFP Photo) 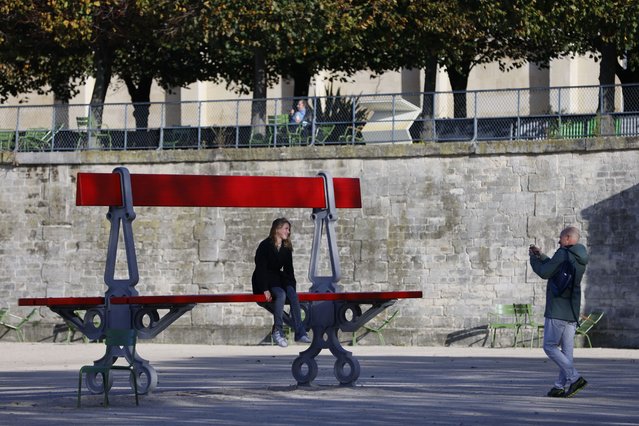 A woman sits on “Double Banc”, artwork by French artist Lilian Bourgeat as part of the FIAC, the French International Contemporary Art Fair, in the Jardin des Tuileries in Paris, on October 21, 2021. The French International Contemporary Art Fair (FIAC), which took place virtually in March because of Covid, returns in real life and online from October 21-24, accompanied by its little sister dedicated to Asia, Asia Now. (Photo by Thomas Samson/AFP Photo) 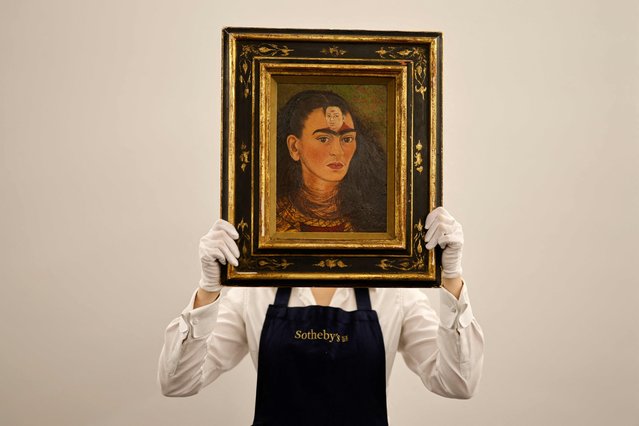 An assistant displays the artwork entitled Diego y yo (Diego and I) by Mexican painter Frida Kahlo at Sotheby's auction house in central London on October 21, 2021. (Photo by Tolga Akmen/AFP Photo) 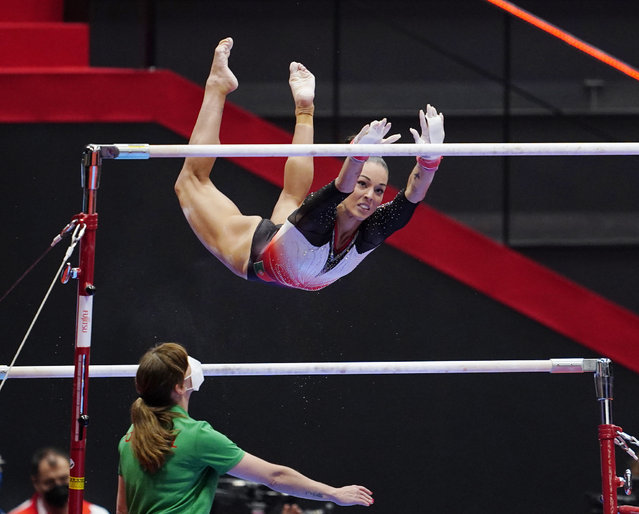