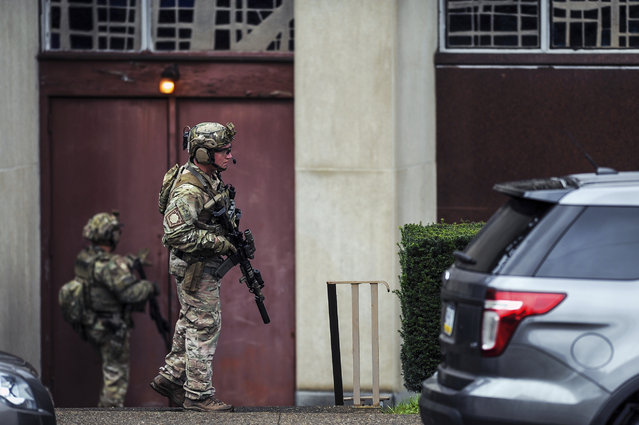 Law enforcement officers check possible entrances to The Tree of Life synagogue where multiple people were killed and others injured in a deadly shooting, Saturday, October 27, 2018, in Squirrel Hill section of Pittsburgh. (Photo by Alexandra Wimley/Pittsburgh Post-Gazette via AP Photo) 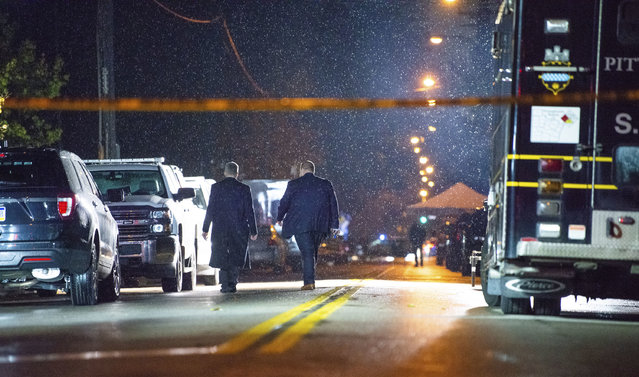 The FBI investigates in the rain after an active shooter situation at the Tree of Life Congregation on Saturday, October 27, 2018, in the Squirrel Hill section of Pittsburgh. A gunman opened fire at the synagogue, killing multiple people and injuring others in one of the deadliest attacks on Jews in U.S. history. (Photo by Andrew Stein/Pittsburgh Post-Gazette via AP Photo) 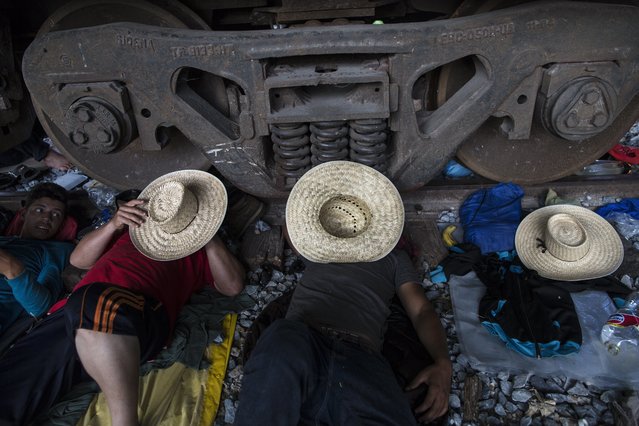 Migrants rest on the railroad rails as a thousands-strong caravan of Central American migrants slowly makes its way toward the U.S. border, between Pijijiapan and Arriaga, Mexico, Friday, October 26, 2018. On Friday, the caravan made its most ambitious single-day trek since the migrants crossed into the southern Mexican state of Chiapas a week ago, a 60-mile (100-kilometer) hike up the coast from Pijijiapan to the town of Arriaga.(Photo by Rodrigo Abd/AP Photo) 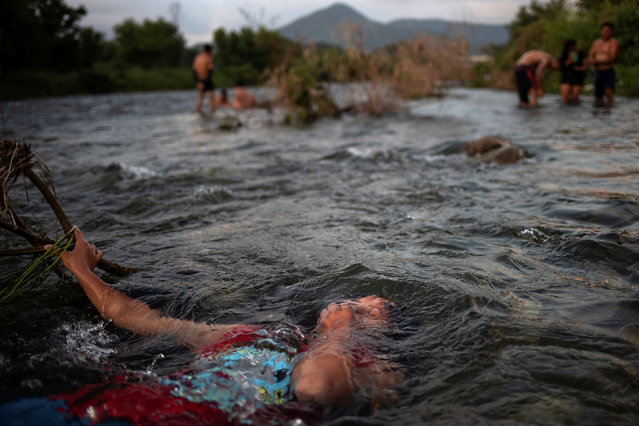 Jensi, a 14 year old migrant girl from Honduras, baths in a fresh water stream as she and others, part of caravan of thousands from Central America en route to the United States, take rest in Pijijiapan, Mexico October 25, 2018. Picture taken October 25, 2018. (Photo by Adrees Latif/Reuters) 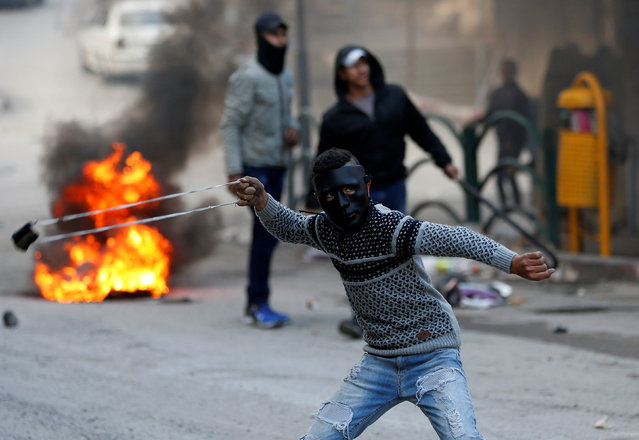 A Palestinian protester hurls stones at Israeli troops during clashes in Hebron in the occupied West Bank October 26, 2018. (Photo by Mussa Qawasma/Reuters) 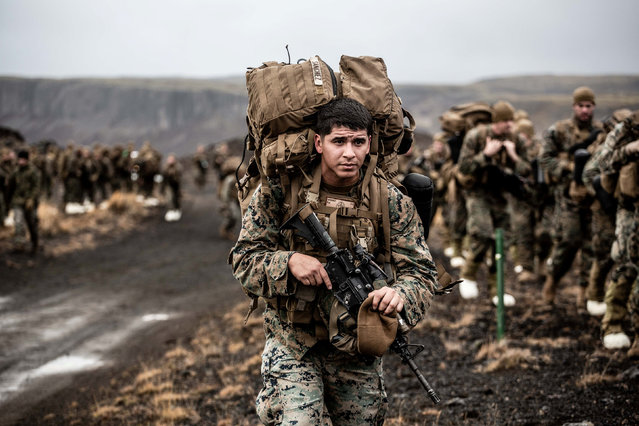 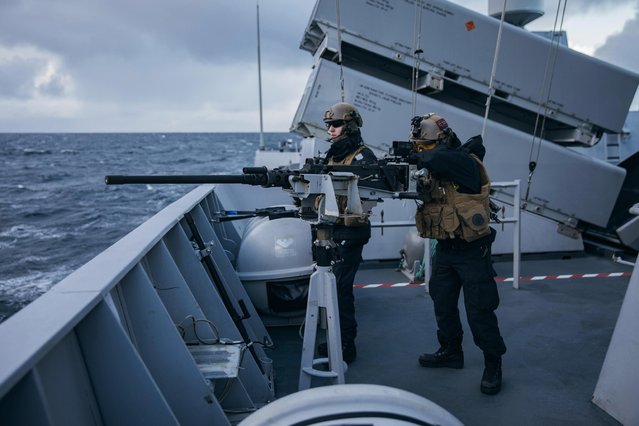 A handout photo made available by the Norwegian Armed Forces shows Royal Norwegian Navy artillerists at HNoMS Thor Heyerdahl during exercise Trident Juncture 18 off the Nordland coast, Norway, 22 October 2018 (issued 25 October 2018). According to reports, some 50,000 participants from over 30 nations are expected to take part in the NATO-led military exercise in Norway from 25 October to 23 November 2018. (Photo by Oda Linnea Brekke Iden/EPA/EFE) 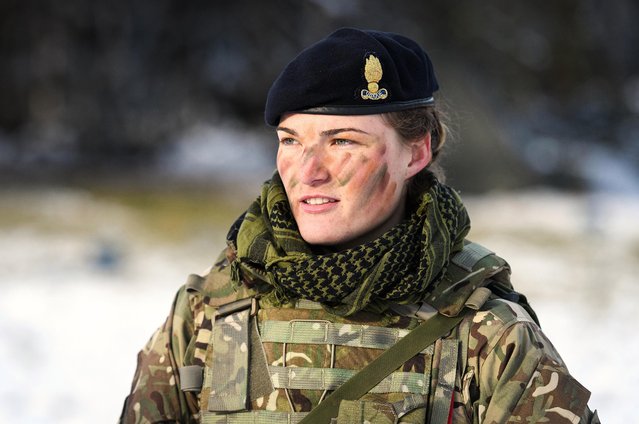 Lt George from the Royal Engineers, a corps of the British Army, speaks to a colleague as she takes part in pre-exercise integration training on October 25, 2018 in Telneset, Norway. Over 40,000 participants from 31 nations will take part in the exercise to test inter-operability between forces, and is the largest exercise of its kind to be held in Norway since the 1980s. (Photo by Leon Neal/Getty Images) 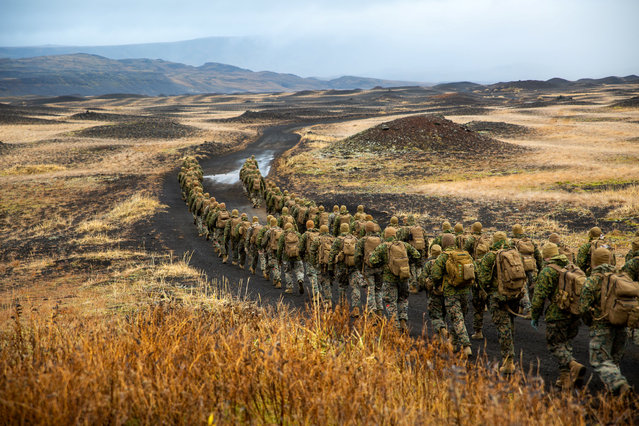 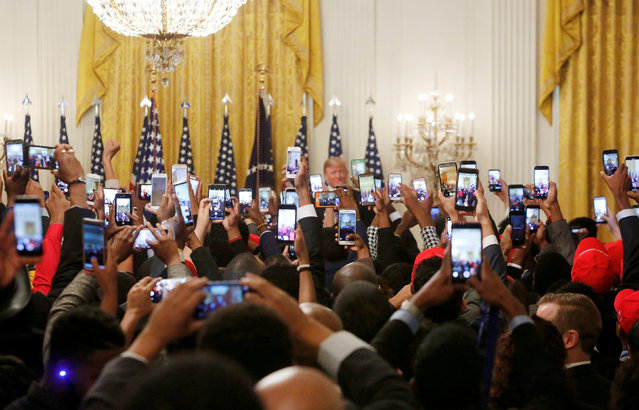 Attendees take photos and videos with their phones of U.S. President Donald Trump as he attends the “2018 Young Black Leadership Summit” in the East Room of the White House in Washington, U.S., October 26, 2018. (Photo by Cathal McNaughton/Reuters) 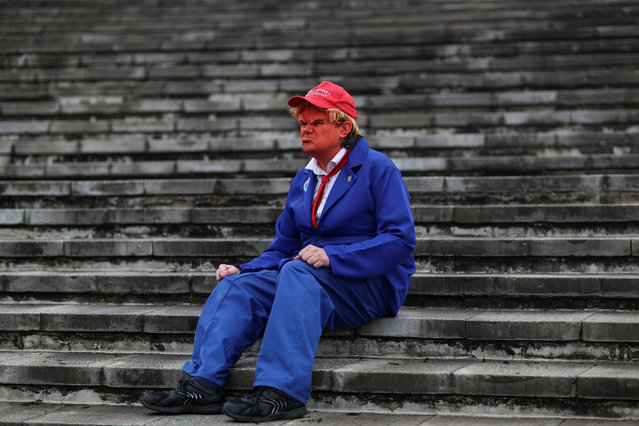 An attendee, dressed as U.S.A. President Donald Trump, sits on stairs as he attends the MCM London Comic Con at the Excel Centre in London, Britain October 26, 2018. (Photo by Simon Dawson/Reuters) 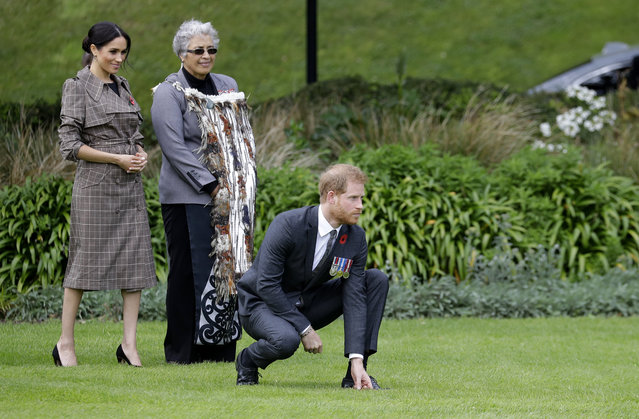 Britain's Prince Harry and Meghan, Duchess of Sussex attend the traditional welcome ceremony on the lawns of Government House in Wellington, New Zealand, Sunday, October 28, 2018. Prince Harry and his wife Meghan are on day 13 of their 16-day tour of Australia and the South Pacific. (Photo by Kirsty Wigglesworth/AP Photo) 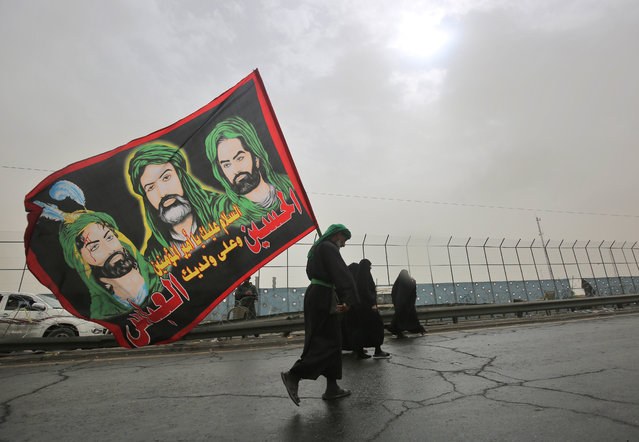 A Shiite Muslim pilgrim walks carrying a flag depicting the Prophet Mohammed's cousin Ali ibn Abi Taleb (C) and his two sons Hussein (R) and Abbas (L), on the outskirts of the Iraqi capital Baghdad on the way towards the central holy Iraqi city of Karbala on October 26, 2018, ahead of the Arbaeen religious festival which marks the 40th day after Ashura, commemorating the seventh century killing of the revered Imam Hussein. (Photo by Ahmad Al-Rubaye/AFP Photo) 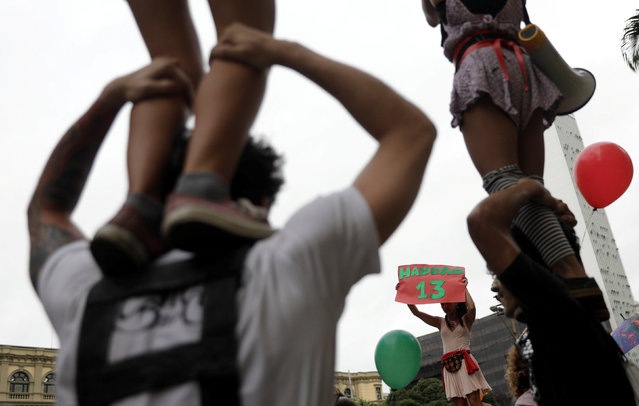 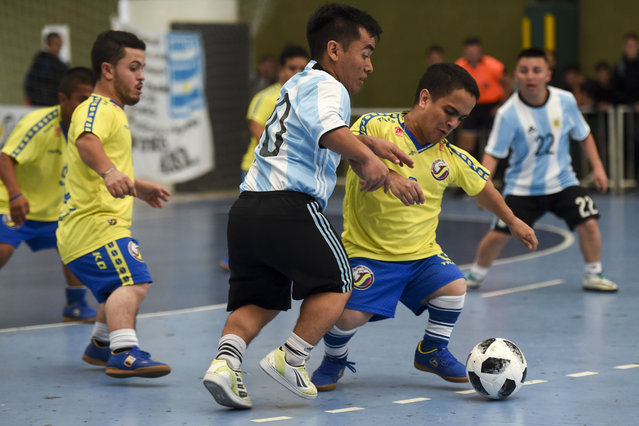 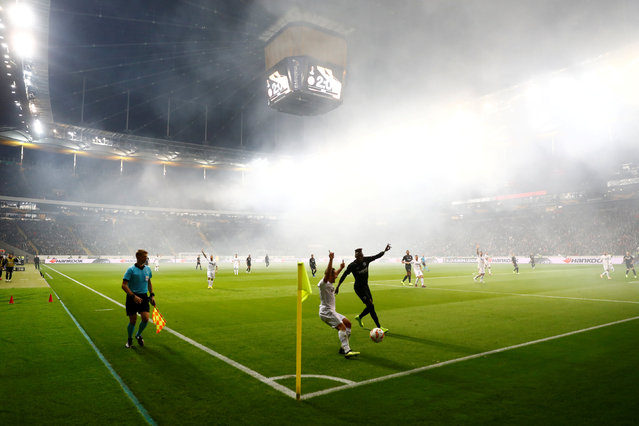 General view of the action during the UEFA Europa League group H match between Eintracht Frankfurt and Apollon Limassol at the Commerzbank Arena in Frankfurt, Germany on October 25, 2018. (Photo by Kai Pfaffenbach/Reuters) 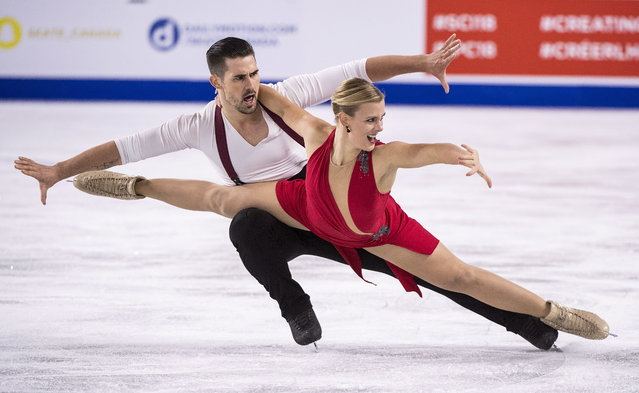 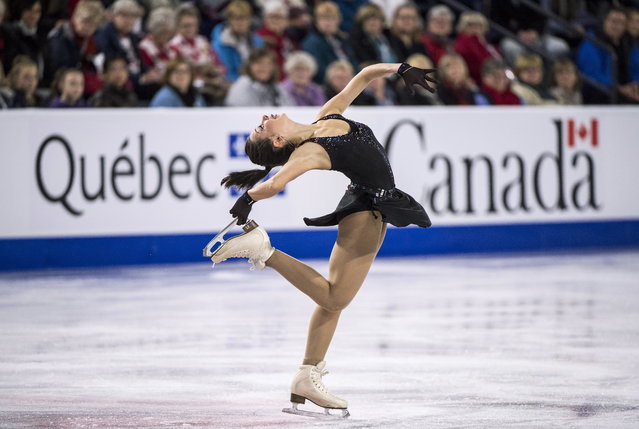 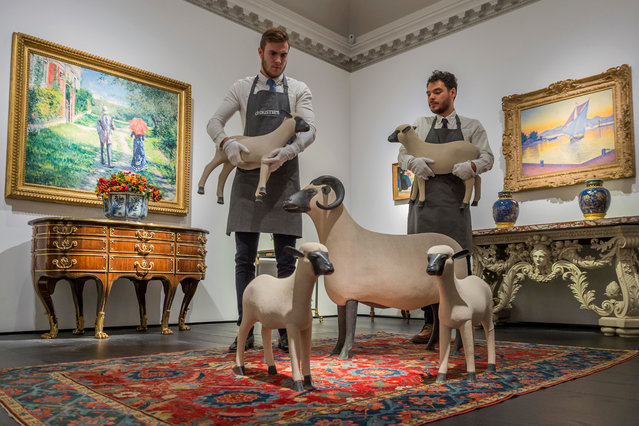 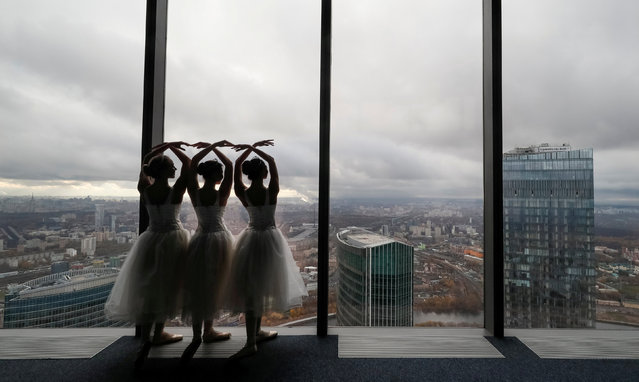 Ballerinas perform during an ice-cream factory promotional event at an observation floor of the Moscow International Business Centre, also known as “Moskva-City”, in Moscow, Russia October 25, 2018. (Photo by Shamil Zhumatov/Reuters) 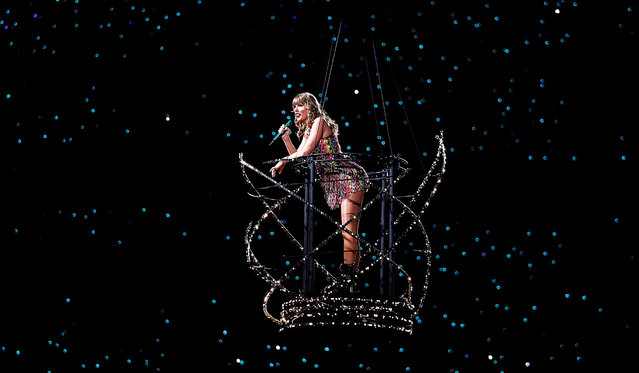 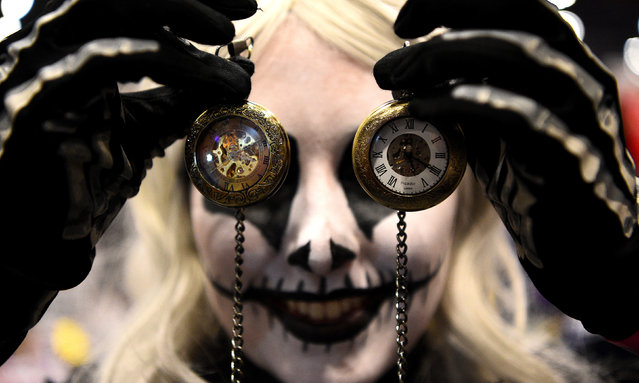