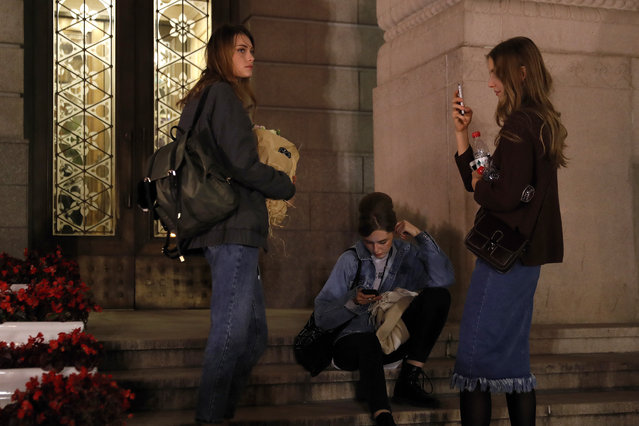 Russian models take a rest outside a Beijing hotel after taking part in a fashion show during the China Fashion Week in Beijing, Monday, October 30, 2017. A Chinese modeling agency that hired a 14-year-old Russian girl is denying media reports that a “slave contract” contributed to the teen's sudden death. The exact circumstances of Vlada Dzyuba's death last week are still murky, and there are conflicting accounts from Russia and China. (Photo by Andy Wong/AP Photo) 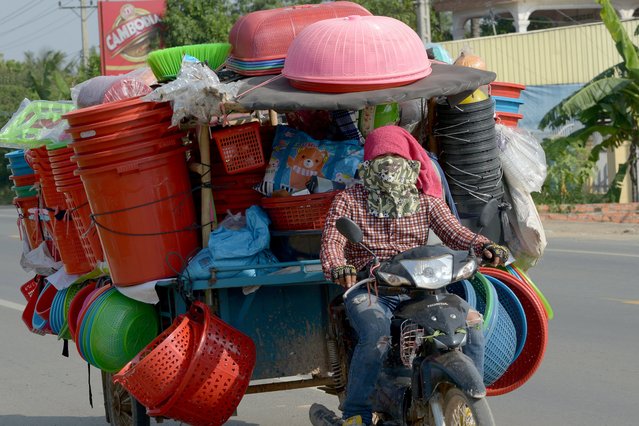 A Cambodian man rides his motor-cart loaded with goods along a street on the outskirts Phnom Penh, Cambodia on October 30, 2017. (Photo by Tang Chhin Sothy/AFP Photo) 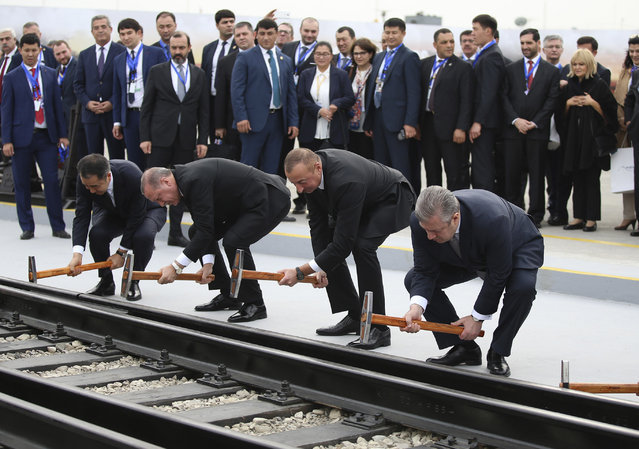 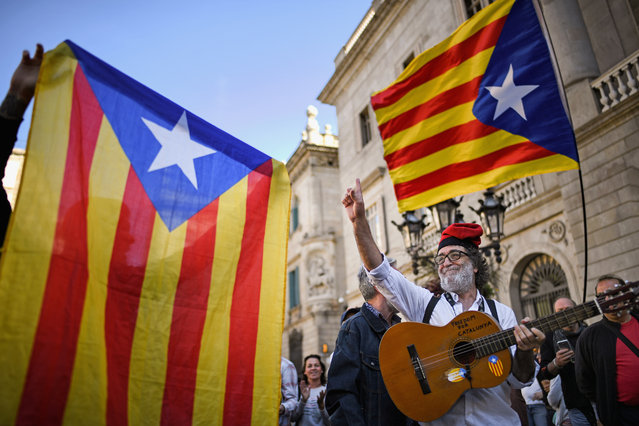 Independence supporters gather outside the Palau Catalan Regional Government Building as Catalonia returns to work following last week's decision by the Catalan parliament to vote to split from Spain on October 30, 2017 in Barcelona, Spain. The Spanish government has responded by imposing direct rule and dissolving the Catalan parliament. (Photo by Jeff J Mitchell/Getty Images) 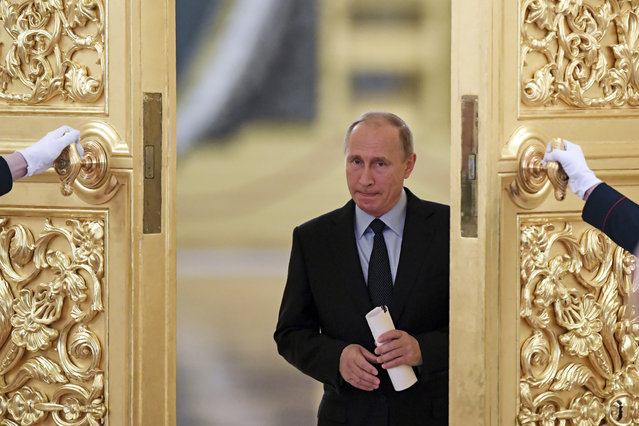 Russian President Vladimir Putin enters a hall to meet members of the Presidential Council for Civil Society and Human Rights at the Kremlin, in Moscow, Russia, Monday, October 30, 2017. (Photo by Kirill Kudryavtsev/Pool photo via AP Photo) 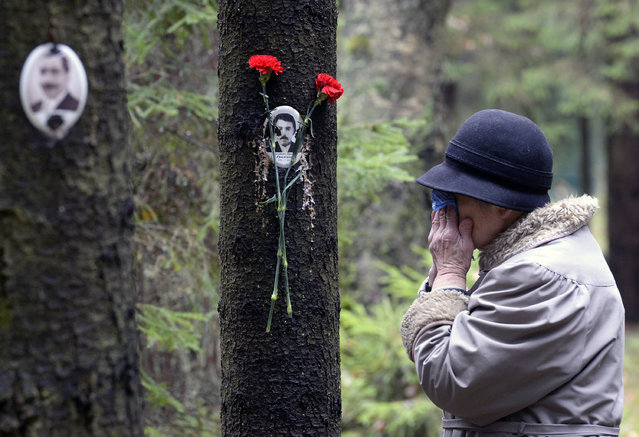 A woman reacts next to a portrait of a victim of Soviet dictator Joseph Stalin's purges at the memorial, where the victims were buried in the woods on the outskirts of Saint-Petersburg, on October 30, 2017. Russia observed today Day of Victims of Political Repressions as people honoured the memory of the thousands of victims perished in the repressions of the Soviet Communist regime. (Photo by Olga Maltseva/AFP Photo) 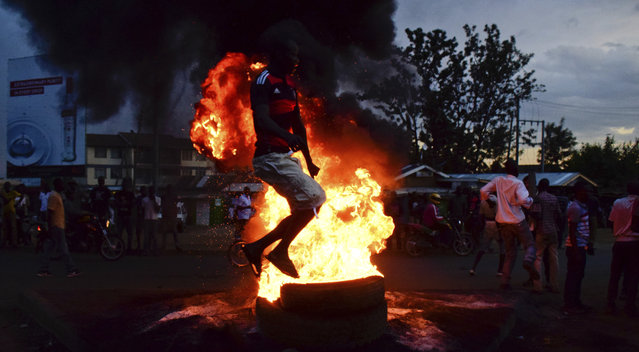 Residents of Kisumu in Western Kenya demonstrate as they light tyres in the streets to show their displeasure with the declaration of Uhuru Kenyatta as the president following the repeat elections held on October 26. Opposition supporters largely boycotted the voting exercise after opposition leader called it a “Sham”. (Photo by AP Photo/Stringer) 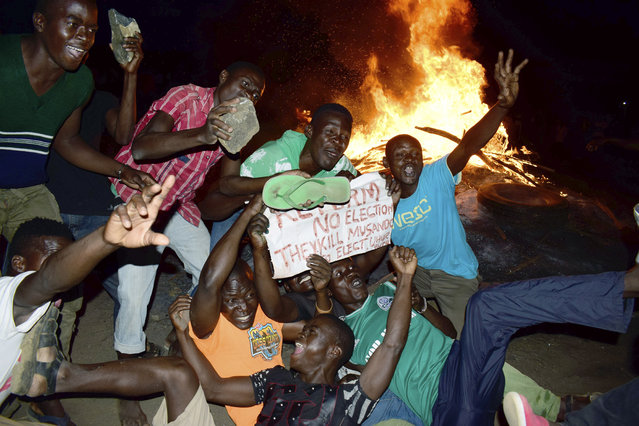 Residents demonstrate as they burn tires in the street after the election result was announced, in Kisumu, Kenya, Monday, October 30, 2017. Clashes erupted after Kenya's election commission said President Uhuru Kenyatta had won the election that was boycotted by the main opposition group. (Photo by AP Photo/Stringer) 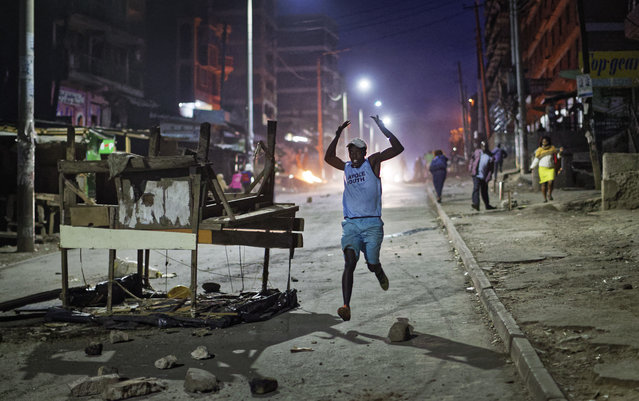 A man holds his hands in the air as he runs past a barricade towards riot police during clashes between opposition protesters and police after the election result was announced, in the Mathare area of Nairobi, Kenya, Monday, October 30, 2017. (Photo by Ben Curtis/AP Photo) 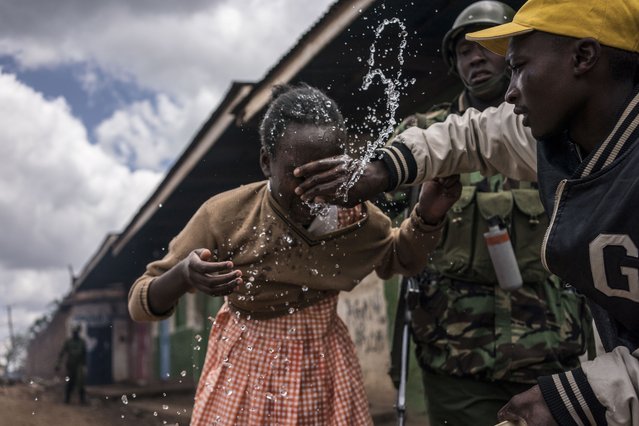 Policemen and residents help a young schoolgirl that inhaled tear gas as the police was trying to hold off a group of supporters of opposition leader while protesting in Kawangware on October 30, 2017 in Nairobi. Kenya's election board said it would announce today the winner of a highly contentious election, sparking fears of further violence in flashpoint opposition strongholds. (Photo by Fredrik Lerneryd/AFP Photo) 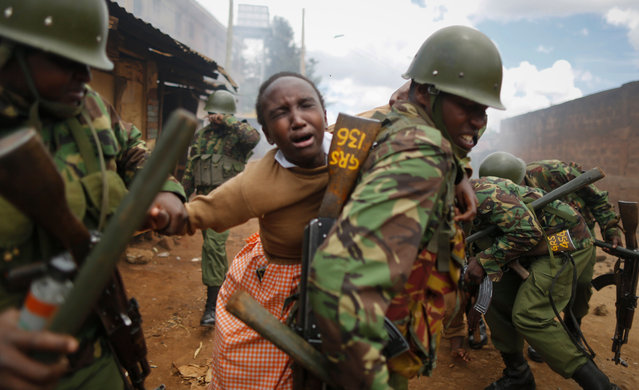 A police officer carries a school girl on his back to get her out of the scene after she was caught up in running battles with police and protesters and was affected by tear gas in Kawangware slum, Nairobi, Kenya, 30 October 2017. Kenya's education minister Fred Matiangi, who also serves as acting security minister, visited a school in Kawangware to inspect how the national exams are being conducted before he was heckled and stoned by supporters of the National Super Alliance (NASA) and its presidential candidate Raila Odinga. Tension is high in opposition strongholds of Nairobi as the country awaits for the electoral commission Independent Electoral and Boundaries Commission (IEBC) to declare President Uhuru Kenyatta the winner of the repeat presidential poll which was boycotted by Odinga. (Photo by Dai Kurokawa/EPA/EFE) 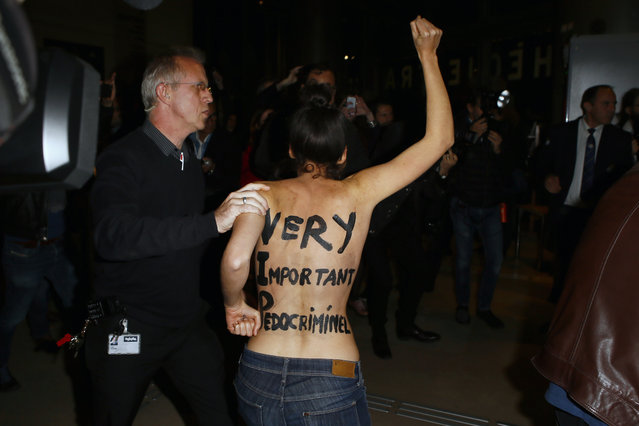 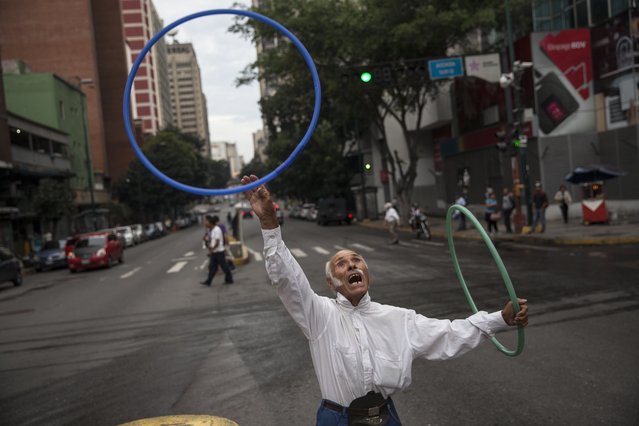 Jose Bestilleiro, 83, from Spain, performs for tips at an street intersection in downtown Caracas, Venezuela, Sunday, October 29, 2017. Bestilleiro said he's been performing every day for the past 15 years, and brings in at least 5,000 Bolivars a day, which on the black market is 11 cents and is the price of a cheap “arepa” sandwich. (Photo by Rodrigo Abd/AP Photo) 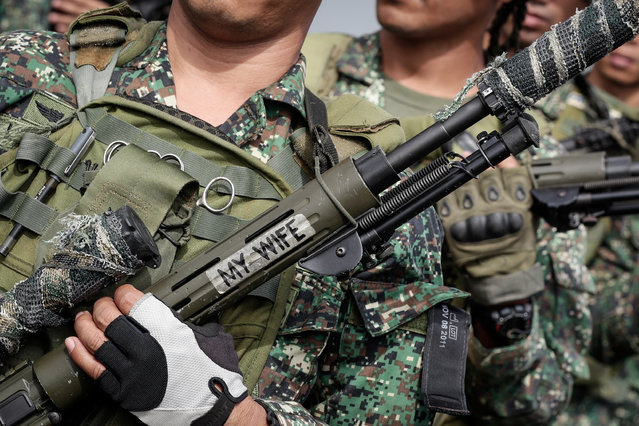 A close-up picture shows a gun of a soldier with a sticker from the Fleet-Marine contingent who were deployed in Marawi during their arrival at a port in Manila, Philippines, 30 October 2017. The Fleet-Marine, composed of more than 500 sailors, marines, seals, aviators, intelligence and civil military operations were given a heroes welcome by the Philippine Navy upon their arrival after a five month deployment in Marawi. Philippine President Rodrigo Duterte on 17 October declared the city of Marawi liberated after five months of fighting between the Philippine armed forces and rebels allied with the so-called “Islamic State”, or IS. (Photo by Mark R. Cristino/EPA/EFE) 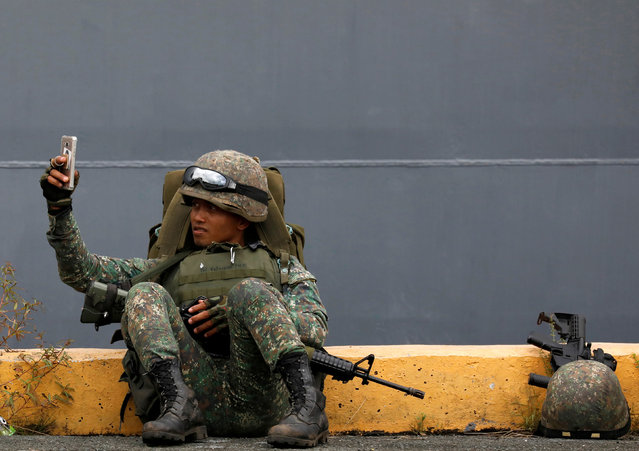 A Philippine marine soldier takes a selfie with his phone during their arrival from Marawi at port area in metro Manila, Philippines October 30, 2017. (Photo by Dondi Tawatao/Reuters) 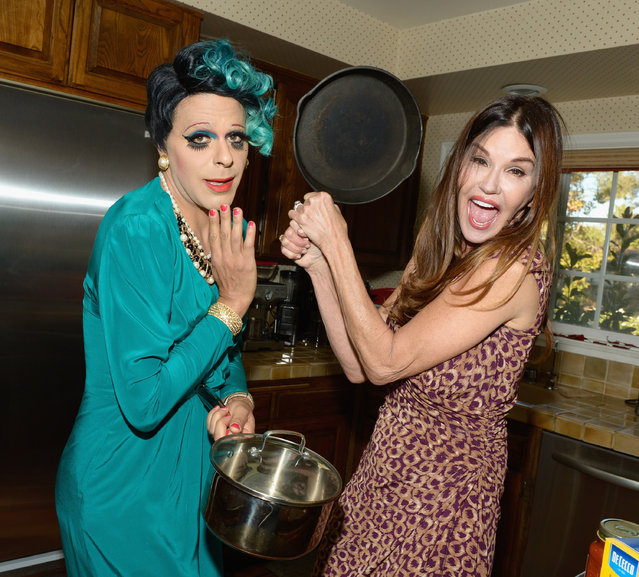 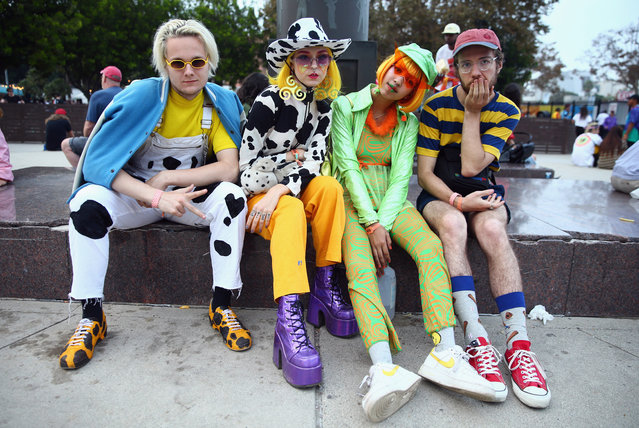