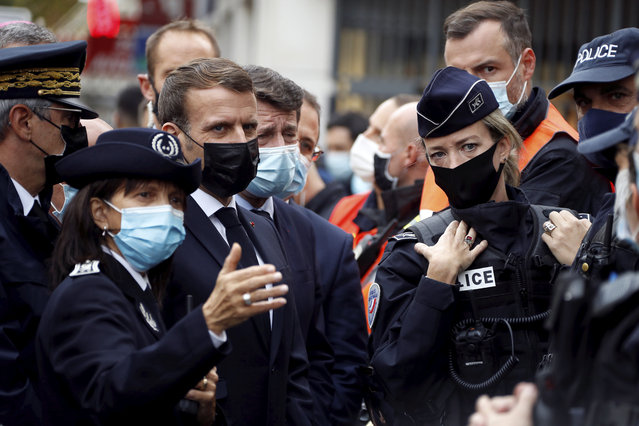 French President Emmanuel Macron, second left, and Nice mayor Christian Estrosi , third left, meet police officers after a knife attack at Notre Dame church in Nice, southern France, Thursday, October 29, 2020. An attacker armed with a knife killed at least three people at a church in the Mediterranean city of Nice, prompting the prime minister to announce that France was raising its security alert status to the highest level. It was the third attack in two months in France amid a growing furor in the Muslim world over caricatures of the Prophet Muhammad that were re-published by the satirical newspaper Charlie Hebdo. (Photo by Eric Gaillard/Pool via AP Photo) 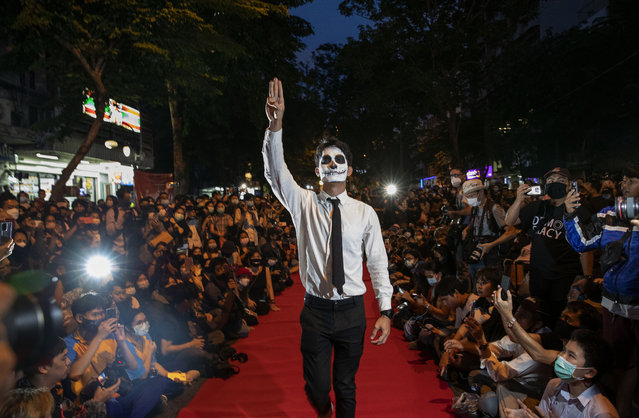 Pro-democracy protesters perform on a mock “red carpet” fashion show billed as a counterpoint to a fashion show being held by one of the monarchy's princesses nearby in Bangkok, Thailand, Thursday, October 29, 2020. The protesters continued to gather Thursday, led by their three main demands of Prime Minister Prayuth Chan-ocha's resignation, changes to a constitution that was drafted under military rule and reforms to the constitutional monarchy. (Photo by Gemunu Amarasinghe/AP Photo) 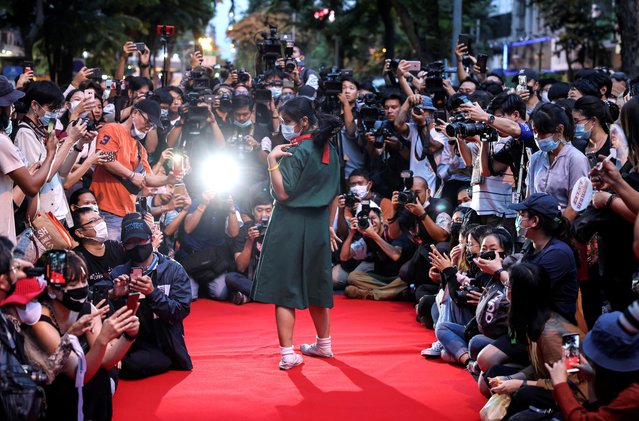 A protester performs on a red carpet while taking part in a protest against the government and to reform monarchy in Bangkok, Thailand, October 29, 2020. (Photo by Athit Perawongmetha/Reuters) 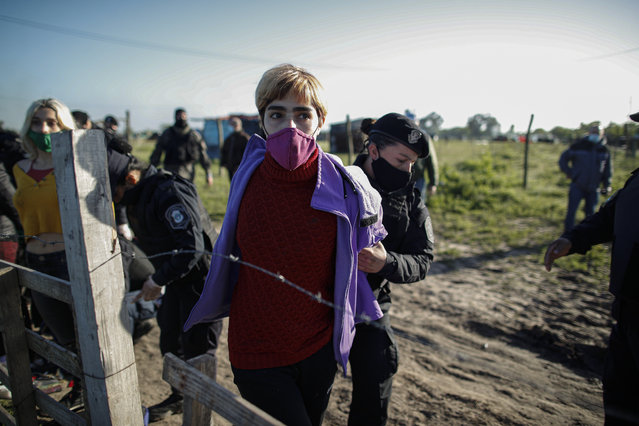 Women are detained by police carrying out evictions at a squatters camp in Guernica, Buenos Aires province, Argentina, Thursday, October 29, 2020. A court ordered the eviction of families who are squatting here since July, but the families say they have nowhere to go amid the COVID-19 pandemic. (Photo by Natacha Pisarenko/AP Photo) 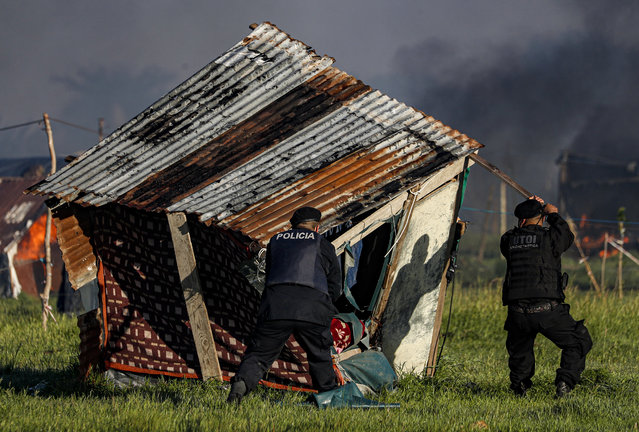 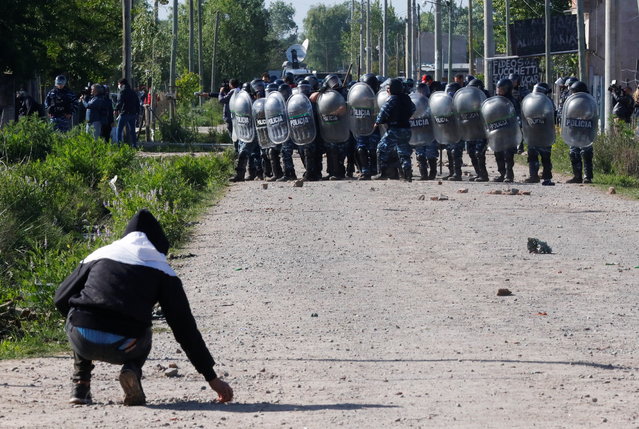 A man grabs stones from the ground as he confronts police officers carrying out an eviction at a squatters camp in Guernica, on the outskirts of Buenos Aires, Argentina on October 29, 2020. (Photo by Agustin Marcarian/Reuters) 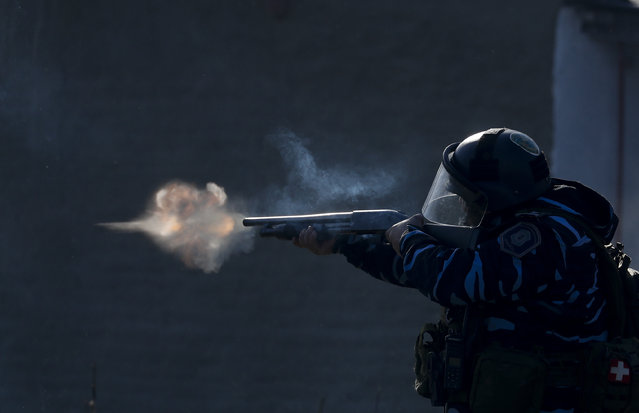 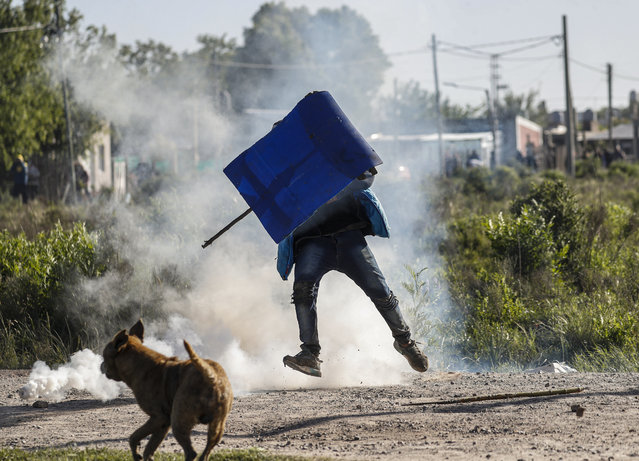 A man carries a makeshift shield through tear gas launched by police during an eviction at a squatters camp in Guernica, Buenos Aires province, Argentina, Thursday, October 29, 2020. (Photo by Natacha Pisarenko/AP Photo) 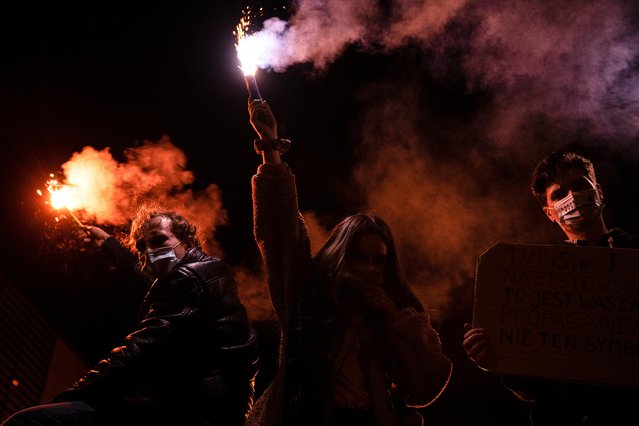 People protest against the ruling by Poland's Constitutional Tribunal that imposes a near-total ban on abortion, in Gdansk, Poland on October 28, 2020. (Photo by Jadwiga Figula/Reuters) 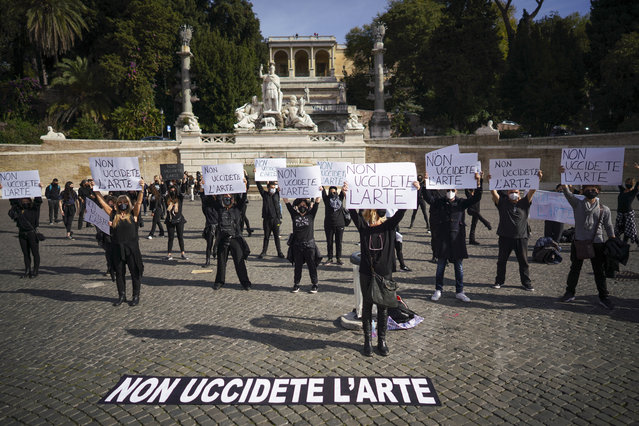 Dancers and theaters workers hold banners reading in Italian “don't kill art” as they stage a protest against the government restriction measures to curb the spread of COVID-19, closing gyms, cinemas and movie theaters, in Rome, Thursday, October 29, 2020. (Photo by Andrew Medichini/AP Photo) 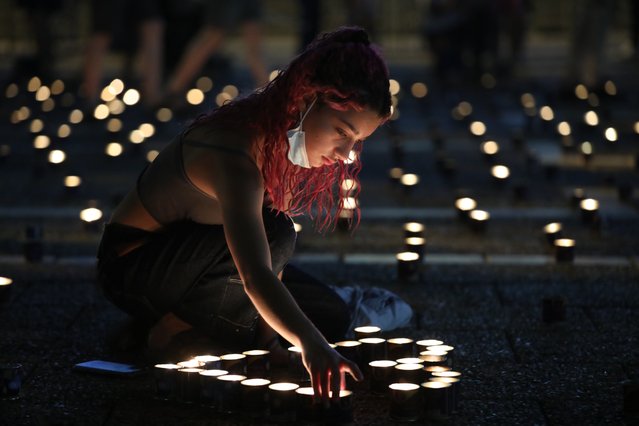 People light 25,000 memorial candles on the occasion of the 25th anniversary of the assassination of the Israeli Prime Minister Yitzhak Rabin, at Rabin Square in Tel Aviv, Israel, 29 October 2020. Rabin was fatally shot by a far-right Jewish law student, who opposed the signing of the Oslo Accords, after attending a peace rally held in Tel Aviv's Kings of Israel Square (now Rabin Square) on 04 November 1995. (Photo by Abir Sultan/EPA/EFE) 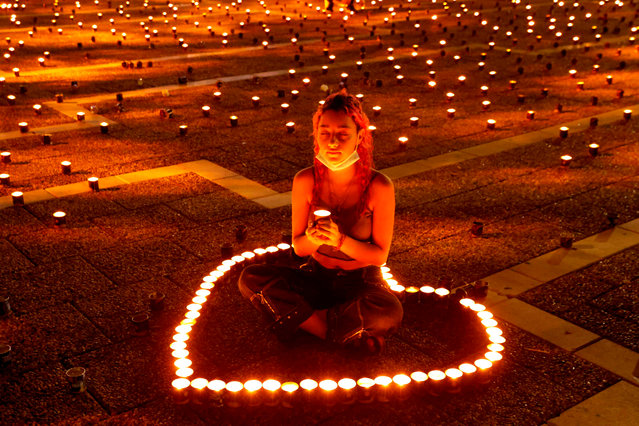 An Israeli attends a 25,000 candle vigil at Rabin Square in the Israeli coastal city Tel Aviv, on October 29, 2020, ahead of the 25th anniversary of the assassination of former Israeli Prime Minister Yitzhak Rabin, Rabin was gunned down in Tel Aviv after a peace rally on November 4, 1995 by a right-wing Jewish extremist Yigal Amir. (Photo by Jack Guez/AFP Photo) 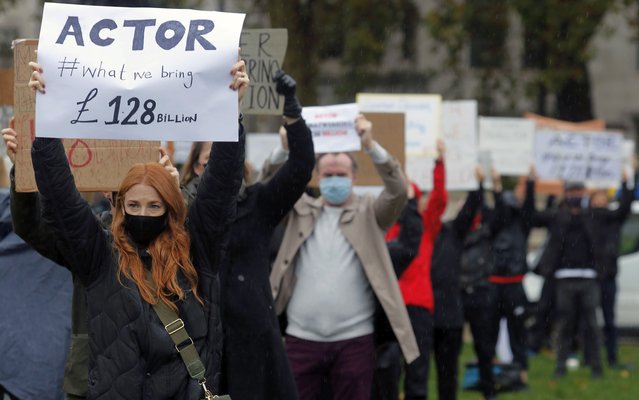 Actors and performers protest against coronavirus restrictions as part of a week of protests in Parliament Square in London, Thursday, October 29, 2020. The British government is under pressure to develop a national strategy to combat the resurgence of the COVID-19 pandemic and “rescue Christmas’’ as scientists warn that the number of people hospitalized with the disease could almost triple by the end of next month unless something more is done now. (Photo by Frank Augstein/AP Photo) 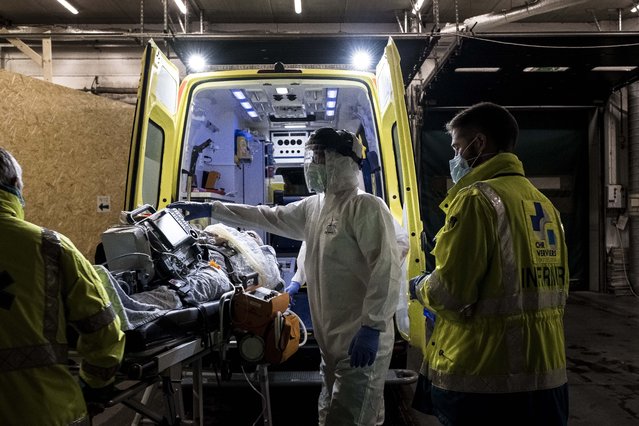 Ambulance crew work as a patient arrives at the CHR CItadelle hospital in Liege, Belgium, Thursday, October 29, 2020. Belgium has announced restrictive measures across the country in an effort to curb the fast-rising tide of COVID-19, coronavirus cases. (Photo by Valentin Bianchi/AP Photo) 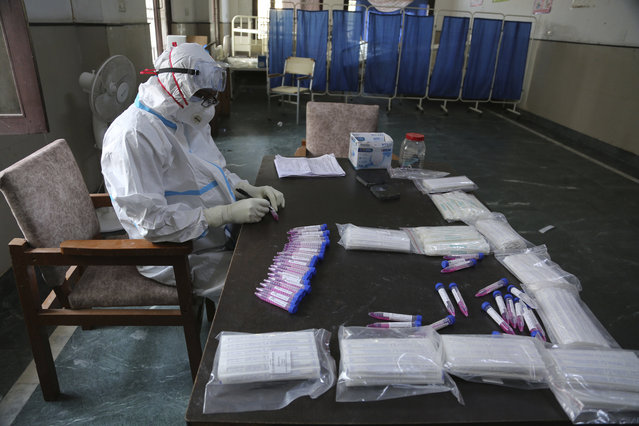