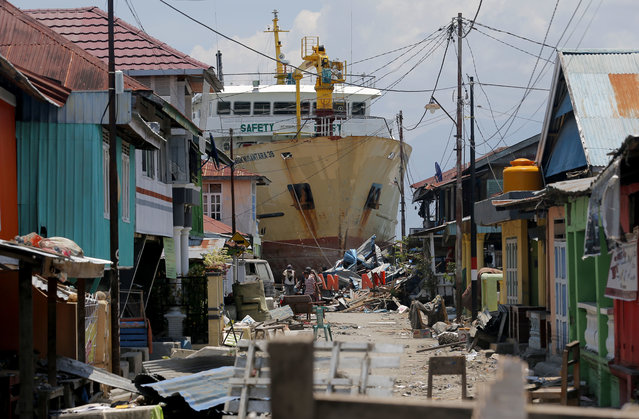 In this Tuesday, October 2, 2018, file photo, a ship rests near houses after it was swept ashore during Friday's tsunami at a neighborhood in Donggala, Central Sulawesi, Indonesia. Five days after Indonesia’s earthquake and tsunami devastated villages on Sulawesi island, residents hoping that help would soon arrive are angry because it hasn’t. (Photo by Tatan Syuflana/AP Photo) 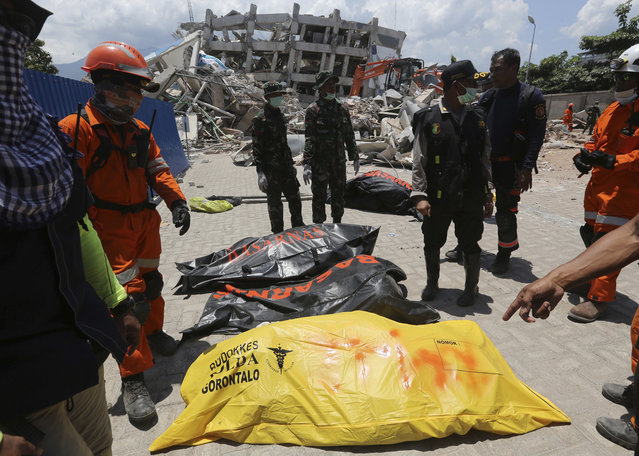 The recovered bodies of earthquake victims are placed outside the wreckage of the Roa-Roa Hotel in Palu, Central Sulawesi Indonesia, Wednesday, October 3, 2018. Aid was trickling into areas crippled by the devastating earthquake and tsunami on Indonesia's Sulawesi island, with residents in one neighborhood clapping, cheering and high-fiving at the arrival of a supply truck. (Photo by Tatan Syuflana/AP Photo) 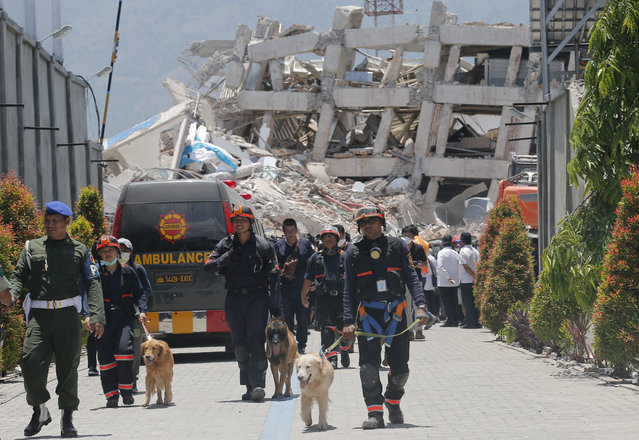 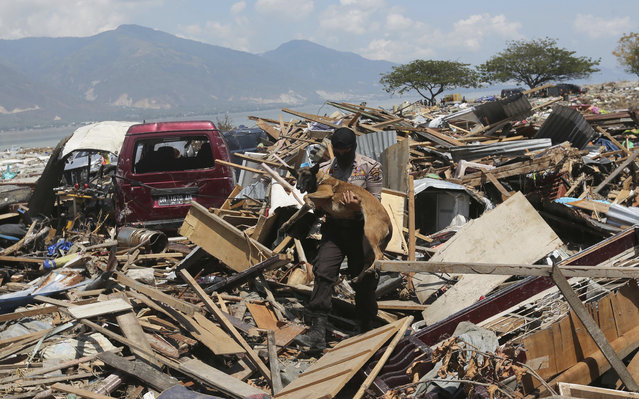 A police officer carries his K9 unit search dog as they continue to search for victims in the wreckage following earthquakes and tsunami in Palu, Central Sulawesi Indonesia, Wednesday, October 3, 2018. (Photo by Tatan Syuflana/AP Photo) 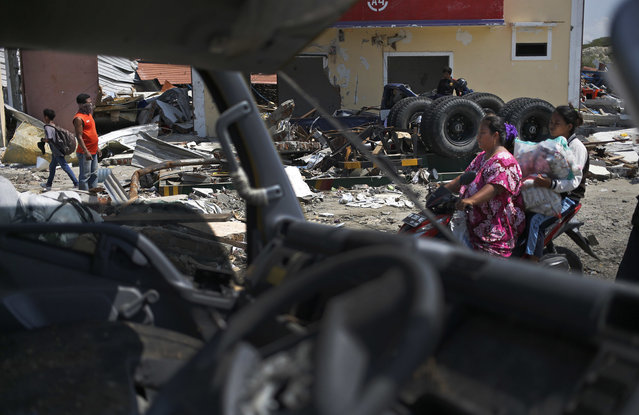 Motorists ride past a destroyed vehicle at the earthquake-affected area in Palu, Central Sulawesi, Indonesia, Wednesday, October 3, 2018. Aid has yet to reach the hardest-hit areas around Palu, the largest city heavily damaged in the earthquake and tsunami that hit on Friday, Sept. 28. (Photo by Dita Alangkara/AP Photo) 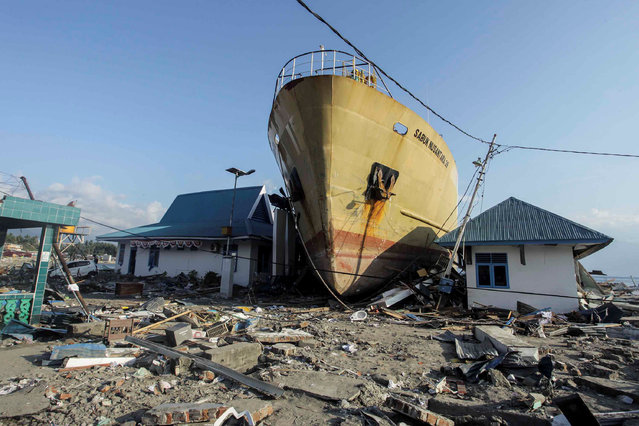 A ship is seen stranded on the shore after an earthquake and tsunami hit the area in Wani, Donggala, Central Sulawesi, Indonesia October 1, 2018 in this photo taken by Antara Foto. (Photo by Muhammad Adimaja/Reuters/Antara Foto) 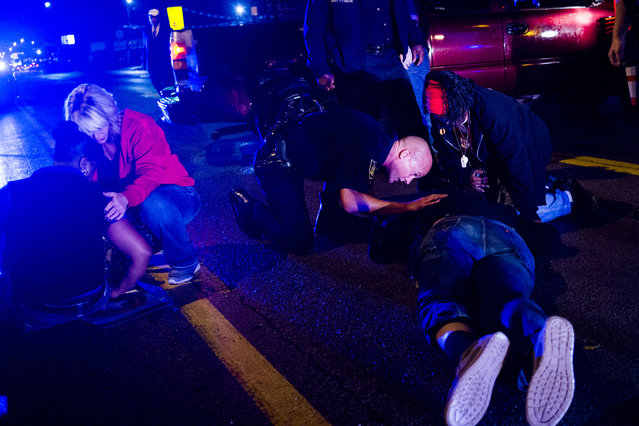 Flint Police Deputy Chief Devon Bernritter, center, checks on the status of a man lying in the street after a truck collided with into protesters calling for the right to form unions Tuesday, October 2, 2018, in Flint, Mich. (Photo by Jake May/The Flint Journal via AP Photo) 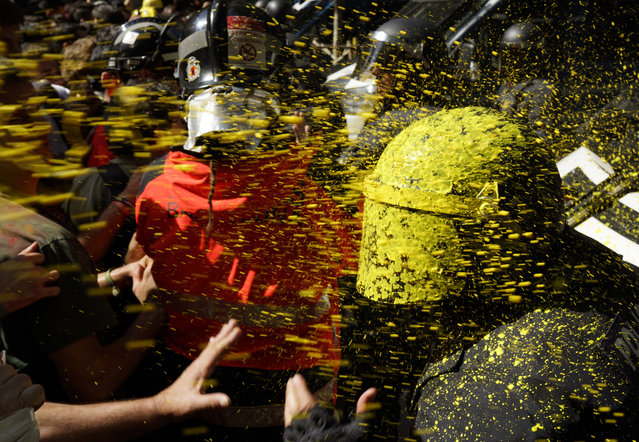 Pro independence demonstrators throw paint at Catalan police officers during clashes in Barcelona, Spain, on Saturday, September 29, 2018. Catalan separatists clashed with police on Saturday in downtown Barcelona as tensions increase before the anniversary of the Spanish region's illegal referendum on secession that ended in violent raids by security forces. (Photo by Daniel Cole/AP Photo) 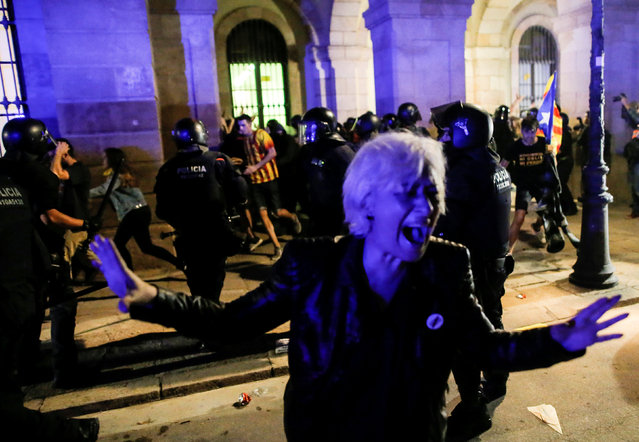 A woman screams as protestors confront police in front of the Catalonian parliament at the end of a demonstration on the first anniversary of Catalonia's banned October 1, 2017 independence referendum in Barcelona, Spain. (Photo by Jon Nazca/Reuters) 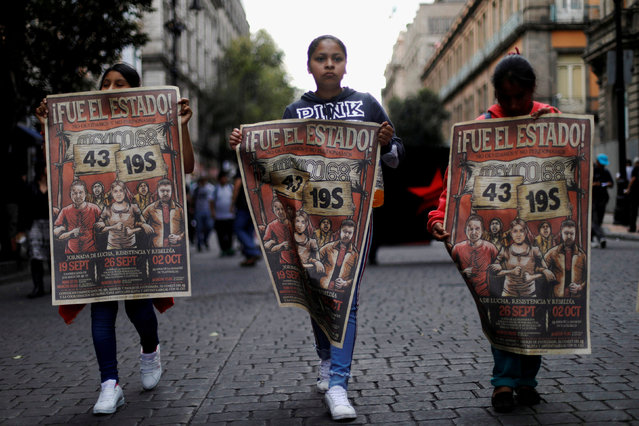 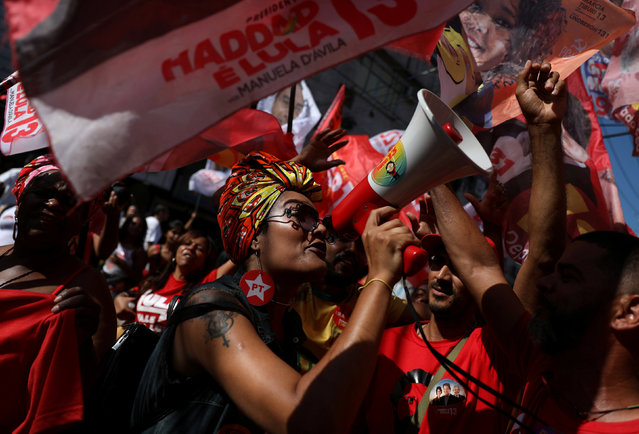 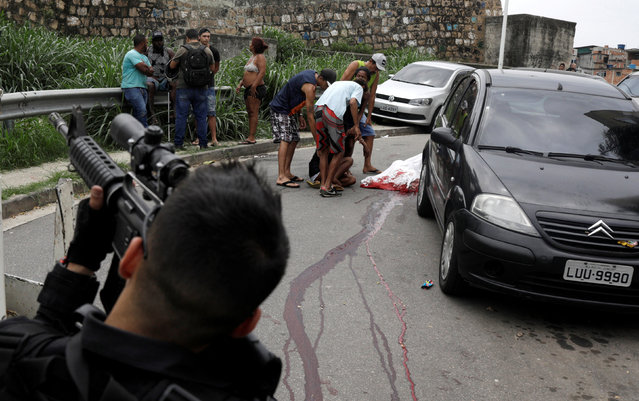 A police officer is seen as Fabiana Cardoso Domingues reacts near the body of her son, Anderson Domingues, after he was shot dead during an operation against drug gangs in the Alemao slums complex in Rio de Janeiro, Brazil October 1, 2018. (Photo by Ricardo Moraes/Reuters) 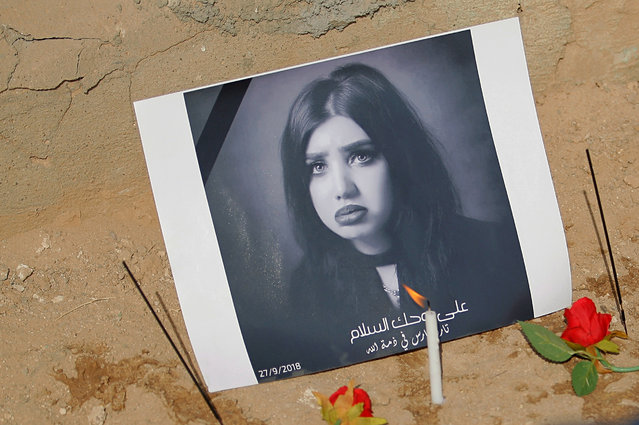 In this Monday, October 1, 2018 photo, fans of slain former beauty queen, fashion model and social media star Tara Fares left flowers and candles at her gravesite, in Najaf, Iraq. Fares won fame in conservative, Muslim-majority Iraq with outspoken opinions on personal freedom. Last week, she was shot and killed at the wheel of her white Porsche on a busy Baghdad street. The violence reverberated across Iraq and follows the slaying of a female activist in the southern city of Basra and the mysterious deaths of two well-known beauty experts. (Photo by Anmar Khalil/AP Photo) 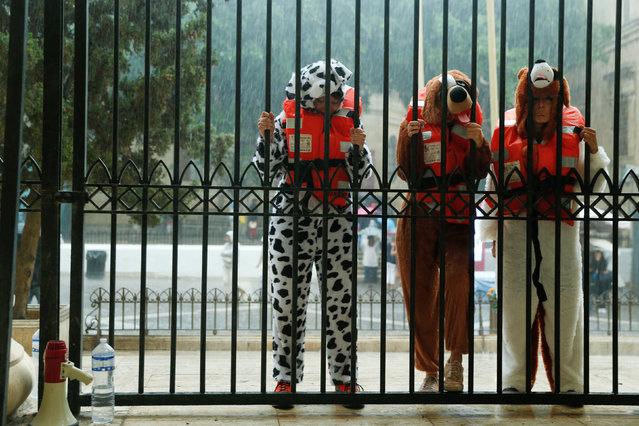 Crew members of the charity rescue ships Lifeline, Sea-Watch 3 and Seefuchs, dressed up as dogs, take part in a protest outside the Courts of Justice, in Valletta, Malta October 2, 2018. (Photo by Darrin Zammit Lupi/Reuters) 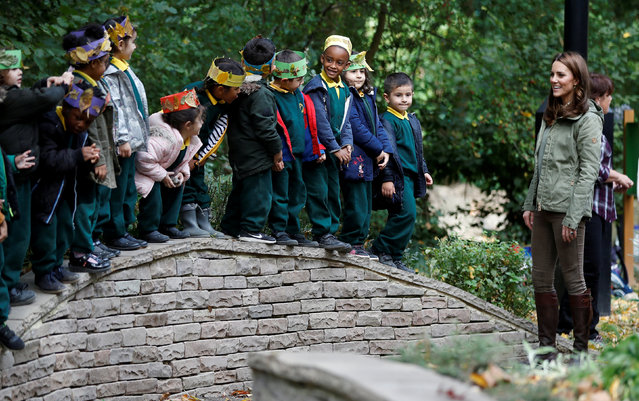 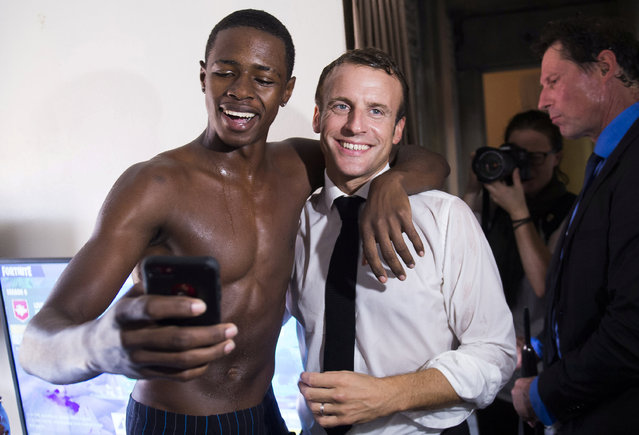 French President Emmanuel Macron poses for a selfie with a youth in the Quartier Orleans during a visit to the French Caribbean island of Saint-Martin, September 29, 2018. (Photo by Eliot Blondet/Pool via Reuters) 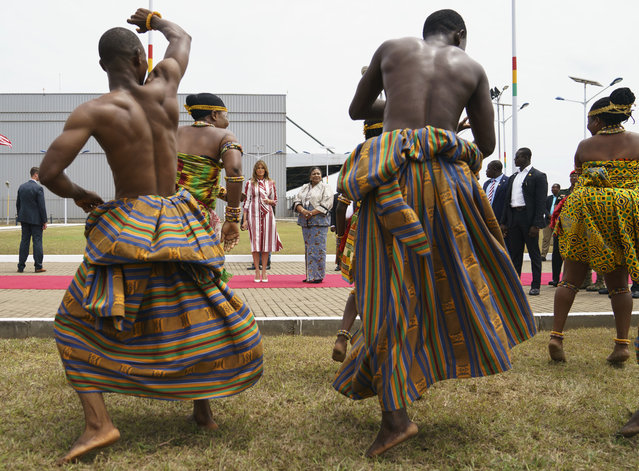 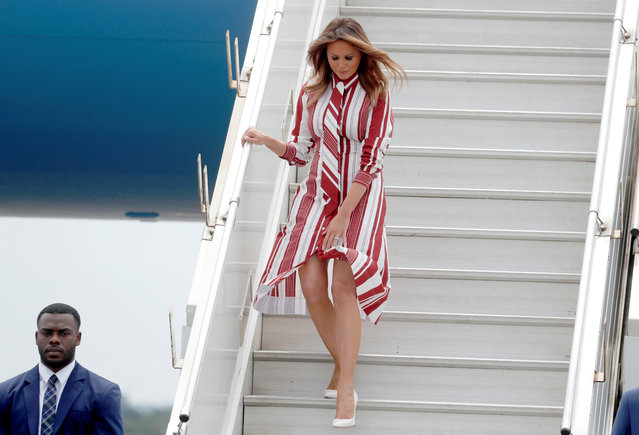 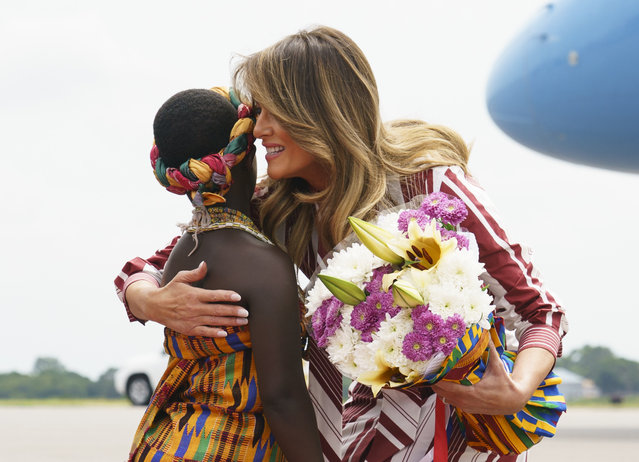 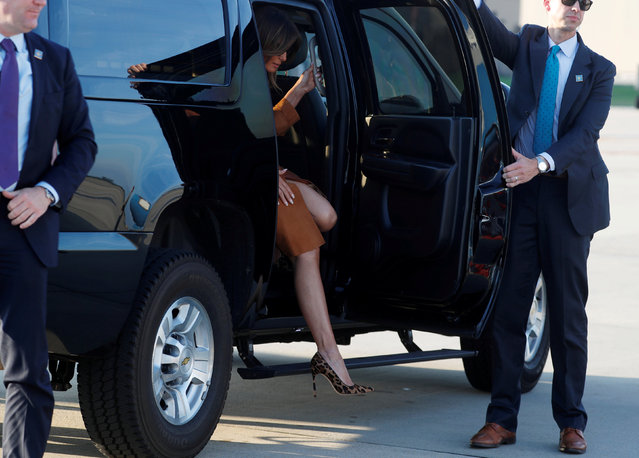 U.S. first lady Melania Trump steps out of her motorcade vehicle as she departs Washington for a tour of several African countries from Joint Base Andrews, Maryland, U.S., October 1, 2018. (Photo by Carlo Allegri/Reuters) 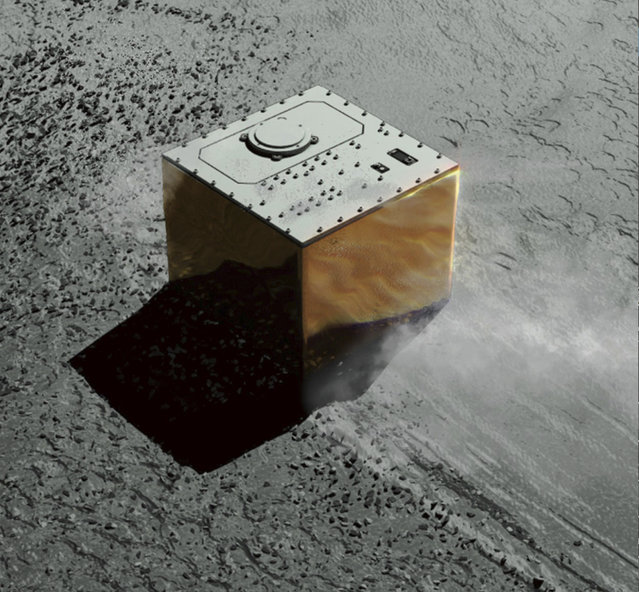 This computer graphic image provided by the Japan Aerospace Exploration Agency (JAXA) shows the Mobile Asteroid Surface Scout, or MASCOT, lander on the asteroid Ryugu. The Japanese unmanned spacecraft Hayabusa2 dropped the German-French observation device, MASCOT, on Wednesday, October 3, 2018, to land on the asteroid as part of a research effort intended to find clues to the origin of the solar system. (Photo by JAXA via AP Photo) 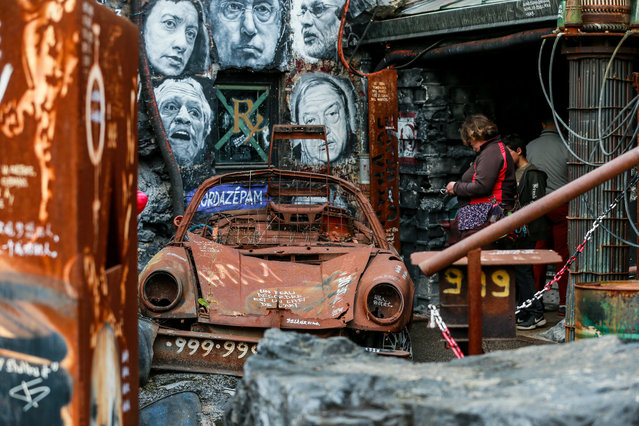 A view of an artwork at “La Demeure du Chaos” (The Abode of Chaos) contemporary art museum in Saint Romain au Mont d'Or, near Lyon, France, 30 September 2018 (issued 02 October 2018). The museum includes works of art by many artists, including the owner Thierry Ehrmann. The Adobe of Chaos is located in 17th century house in a small village not far from Lyon and aims to represent post-war chaos, among others. The controversial museum has been the subject of several lawsuits because some people regard the project as a provocation rather than art, according to media reports. (Photo by Stephanie Lecocq/EPA/EFE)
Edit Del
03 Oct 2018 10:01:00, post received 0 comments
Publication archive:
←   →
Popular tags:
All tags
Last searches: